The Simple Pleasures of Typewriters 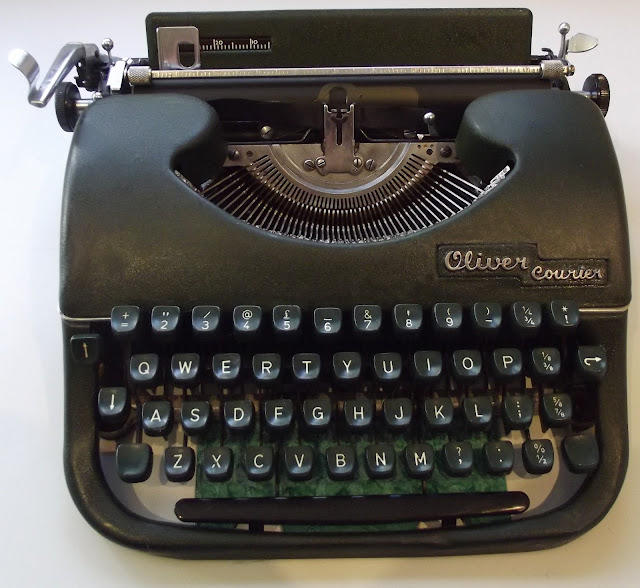 As much as I love researching and writing typewriter history, I realised this afternoon that nothing gives me greater pleasure than taking a badly neglected typewriter and restoring to it a long-lost sense of pride in its appearance.

It is such a buzz that I could very happily spend the rest of my life doing this sort of thing. If I could be someone else, it would be a Tom Furrier or a Bill Wahl or a Greg Fudacz. That would be heaven on a screwdriver. But for the time being, at least, I am content being me, and just messing around with typewriters, not trying to make a living from them. Ah typewriters, what simple pleasures they offer. 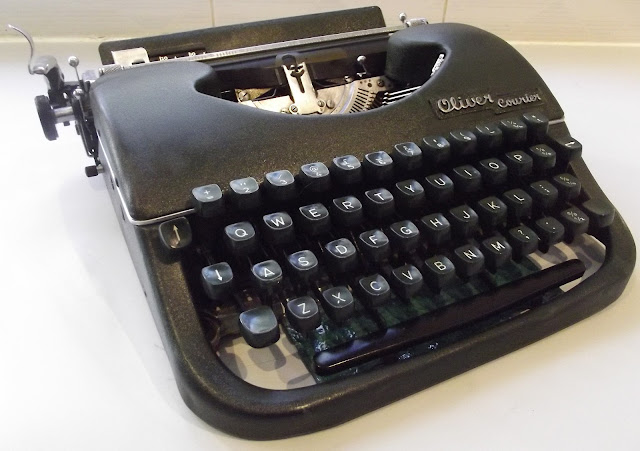 This dark green Oliver Courier portable, made in Croydon in London in 1957 (serial number 57-37724), had seen far, far better days when it arrived, badly packed, on my front doorstep today. Such neglect is deplorable. It had been exposed to the elements, and was full of rust, cobwebs, dust, dirt and sundry other indescribable bits of grit and gunk.
The eBay photos did not, of course, reveal any of this. Just the paint chips on the top and front, and clear evidence the “Oliveri”, as it was listed, had suffered a serious hit, with a  bashed and buckled rim in front of the space bar. 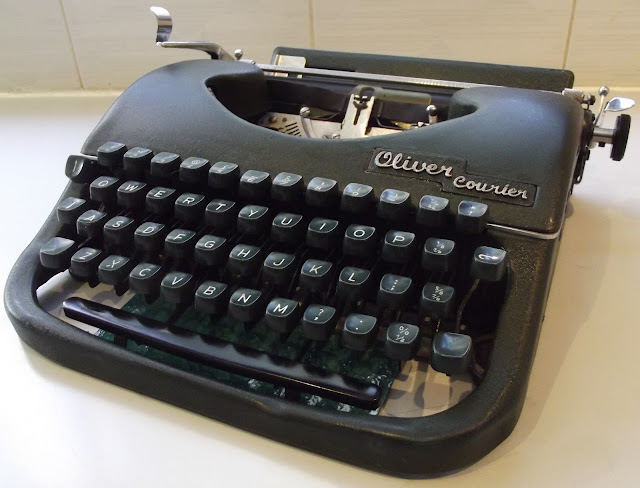 But I was attracted by the colour, a deep green. It never occurred to me at that time that the colour was similar to the original Olivers (the British company descended from the American one). I must have bought at least 99 per cent of the British-made Oliver portables that have come up on Australian eBay in the past seven years, if not all of them, but had not previously seen one in green. The later models usually come in a dull grey, the earlier ones in black. (I have long been intending to post on the full range of Oliver portables and will do so soon. This green one will just have to get double exposure when I do, since I couldn’t resist posting on it separately today.) 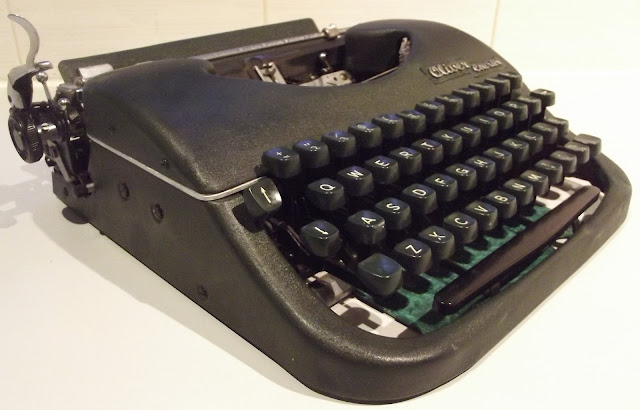 A little crinkle black Oliver portable was among the first typewriters I bought, soon after I started collecting. My erstwhile editor, Jack Waterford, spotted it in a Fyshwick bric-a-brac shop and let me know it was there. I love it to this day. It is the same design as Richard Polt’s beautiful shiny black Patria, a machine I have often coveted.
There was something highly suspicious about the bidding on this green Oliver. It started at $25 and attracted 10 bids. I put in a very late bid of $120, when the bidding was at $40, but it went for $122.50. Straightaway my gut feeling, based on the way the bidding went, was that I’d receive a “second-chance offer”. Sure enough, a few days later I did. The successful bidder had refused to pay up. Surprise, surprise! The seller relisted at a “buy it now” price of $120, but my interest in it at that price had waned. I told the seller so. She listed it a third time (taking my advice, this time as an Oliver, and mentioning “a few small dents”). It was again for auction, at the original starting price of $25. After just three bids, I won it for $38.90. 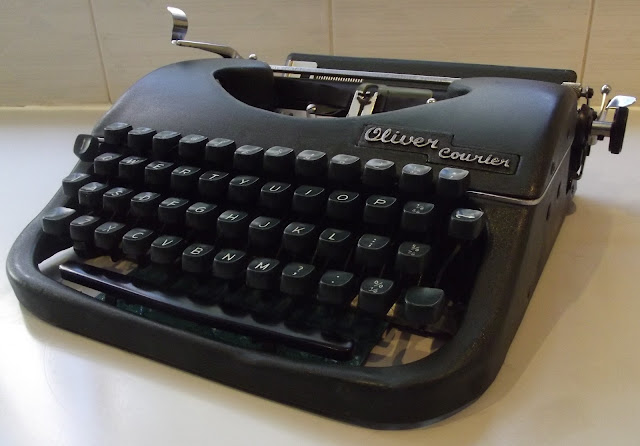 I must confess that after spending a few hours cleaning the Oliver this afternoon, the thought crossed my mind: If the seller had made an effort to tidy it up herself, she might have got the $120 she was after.
Anyway, I’m delighted with the Oliver – now …
The front of the frame has been straightened out, along with the spacebar itself, the paint chips have gone and the Oliver Courier is looking as it should for a 55-year-old portable.
I was shocked when I first took a close look at it. I’ve seldom seen such a mess. It was so bad that even the segment was covered in a film of some sort of gunk – which of course meant that, belying the item description, the typebars were struck tight and the machine couldn’t type. The back section, including the margins bar, was rusted up, but all that has now gone. And the chrome has been polished up all over.
Now the Oliver Courier not only looks great, it also types extremely well.

I must say, at the end of this short restoration job, the sense of satisfaction I've got from injecting new life back into the Oliver portable is enormous. Such simple pleasures indeed ...

Posted by Robert Messenger at 23:58

And you were a little bit depressive just a few posts ago... Sounds like things are going great! I am so glad to hear it.

That Oliver is stunning. It is too bad you didn't take a before picture. It is hard to believe it looked as bad as you say.

I've been doing a lot of typewriter rescue myself as of late; a particular Underwood comes to mind, that was set out and priced specifically for keychoppers. I think I'm going to take a fierce pleasure in bringing that one back from the dead. Heck, my first typer is an ongoing rustbucket of a project!

I'm so happy you seem to be finding your stride now! And what a pretty little machine; I'm not very familiar with Oliver portables yet, as I found the big-eared galoots that are their predecessors first, but Olivers big and small, I love them all! I can only imagine what condition that poor little fella was in. It's wonderful you've brought it back to such nice working condition. Kudos!

The lovely Oliver portables...another machine I am yet to own. That one is particularly nice, and, to me, has undertones of an SM3. Quite a lovely little typer.
I am glad to hear you did, in the end, get to purchase it. I had my first 'second chance offer' the other day, and I jumped right on it. Meeting up tomorrow night to grab it, and I will be sure to post something on it.
Congrats on the great find.

You expressed it exactly RIGHT -- typewriters truly are simple pleasures!

I have derived many hours of satisfaction from cleaning up the dirty machines in my collection, bringing them back to life. So I totally identify with your recent experience with the Oliver.

Nice job bringing the Oliver back into good condition! I also am happy when I can do that -- so much so that I almost prefer getting a dirty machine to a clean one.

I thought that Will Davis' note would make a nice surprise. :)

Congratulations on the Oliver. Your work brought it back to an outstanding typewriter. 17 A

You could say that I am "green with envy" at your new Oliver. I have an Oliver albeit an old one that needs to be restored. It sits in the garage waiting for the same kind of care that you have showed this little olive machine. It's rather a charming little typewr.

MAY I ASK YOU THE PRICE FOR OLIVER TYPEWRITER. I WILL BE LISTING SAME ITEM BUT ITS CREAM AND IN ITS BOX. IT LOOKS LIKE A SNAKE LEATHER. DO YOU KNOW HOW MUCH I SHOULD LIST IT ON EBAY
SADIKSEVIK@HOTMAIL.COM