On The Road With Typewriters: The 2013 Canberra to Brisbane Type-In Odyssey (4) 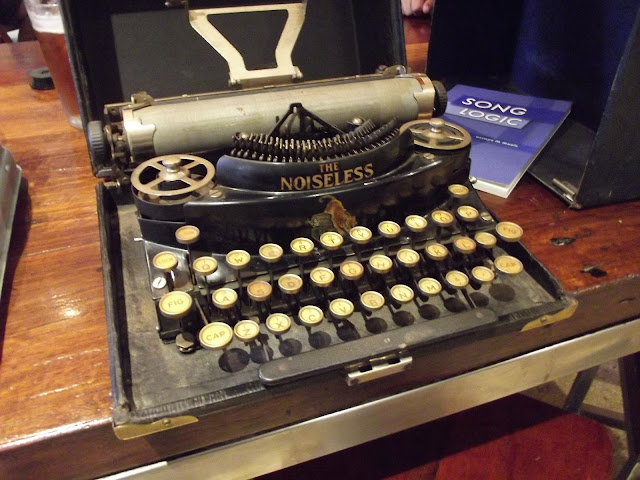 Though still a little worse for wear from the reunion celebrations at the Lansdowne Road Irish pub the night before - I'm not used to such events any longer -  I woke early, full of anticipation for the great day ahead. Touch (Under)wood, I'm delighted to say I've never suffered a hangover from drinking pints of Guinness, and I've had one or two in my time.
I also knew I had to be on my toes. Today was the day this whole 3500-kilometre round trip was about. It was the day of the first Australian Type-In, to be held at the historic Breakfast Creek Hotel in Brisbane. 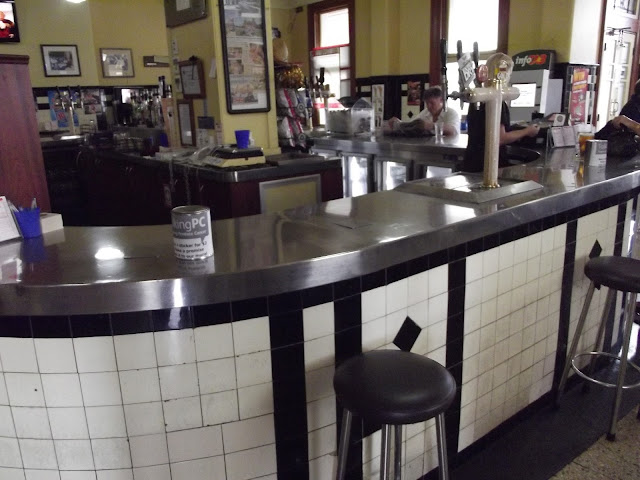 A typically old-style Australian bar, the rounded bar being in the centre of the large room and tiles everywhere, for ease of hose-down cleaning.
But first I had two typewriters to pick up in Brisbane. I had won them on Australian eBay some weeks before, and knowing I would be in Brisbane for the Type-In, asked the sellers if they would hold on to the machines until I got up there. Both sellers proved to be very cooperative and helpful.
I lived in Brisbane in the mid-1980s, but it has grown and changed enormously since then, and it never has been an easy city to find one's way around. Fortunately my friend Gary not only provided me with a global positioning system device ("Tomtom"), but programmed it so I could drive straight to the homes of the two sellers. Without that I probably would have spent the entire day roaming all over Brisbane, looking for these places in complete frustration, and might have missed the Type-In. As it was I gave myself plenty of time to pick up the typewriters ahead of the Type-In, and because I had the GPS, the process was done and dusted with three hours to spare. 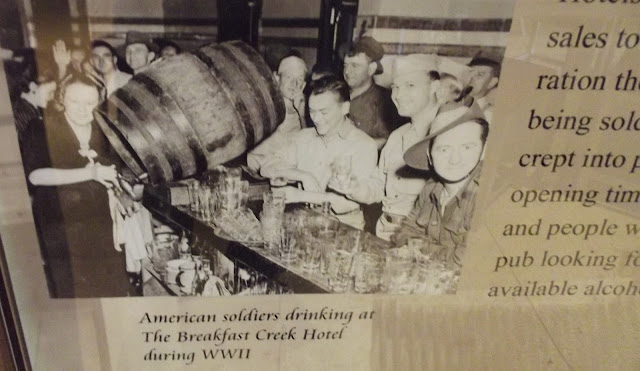 One of the reasons I have been able to get cracking so early each day up here is that while my body clock is still on Canberra time, there is no daylight saving in Queensland. Queenslanders grew up being taught to maintain the rage against daylight saving, on the grounds it faded the curtains and soured the school milk. Sorry for the Australian in-house joke, but Queenslanders were once known as Bananalanders in the sense that being "bananas" was a polite term for being loopy. 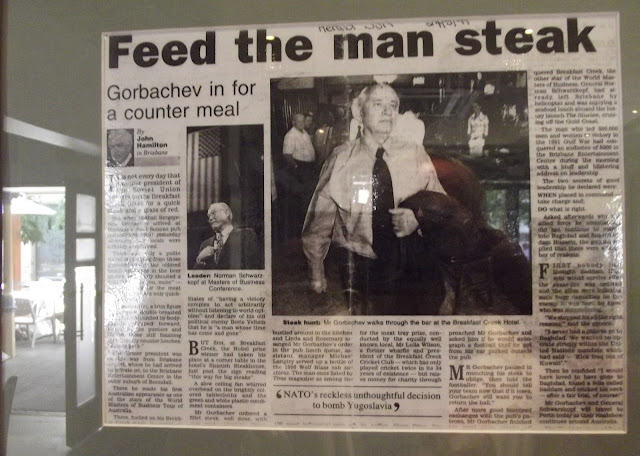 Normally I would have been full of trepidation approaching Brisbane to begin a hunt for typewriters through its myriad hilly little suburbs. But with "Tomtom" giving me directions in a calming, reassuring voice, by the time I got to Underwood I was totally relaxed about the mission. The sight of a London taxi cab on the highway might otherwise have thrown me. 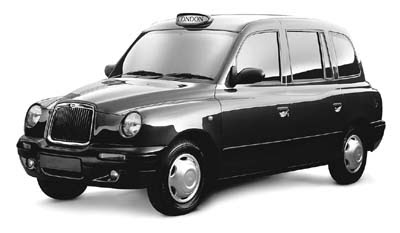 In Oxley, Fred handed over the mystery typewriter. He said he had been forced to buy it, along with a cheap, plastic Chevron, because the two typewriters were part of an auction package and all he really wanted was the third item, a richly decorated old New National sewing machine. At first glance I thought the typewriter might be a Bar-Let (never having seen one in the metal, it's hard to judge by size). But later, looking at this typewriter with John Lavery in the car park of the Breakfast Creek pub, I realised it must be a German machine. I plan to post photos of it tomorrow, after I get the Hervey Bay and have the chance to give it a bit of a clean-up and perhaps get it working. 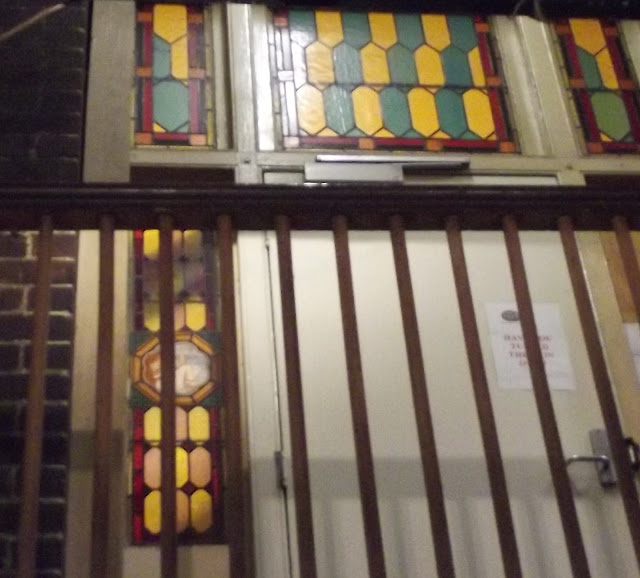 Stained glass panels upstairs in the allegedly haunted Breakfast Creek pub
Then it was on to Darren's in Toowong to pick up a lovely Noiseless portable. I was delighted with its condition, but as John Lavery later pointed out,  I will need to do something about the "exploded" feed rollers to get it fully operational.
Having accomplished this part of the day's agenda with such unexpected ease, I had plenty of time to get to the Breakfast Creek pub, have lunch there and take my time looking around this wonderful old building. 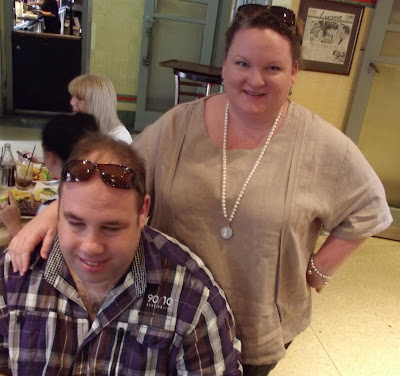 Scott and Jane
In due course John and Margaret Lavery arrived from Beaudesert, then Scott Kernaghan and his friend Jane. I took John and Scott out to the car park to show them various typewriters in the back of my station wagon, and suddenly Steve Snow emerged holding two typewriter cases. It was Type-In "on" - all systems go! 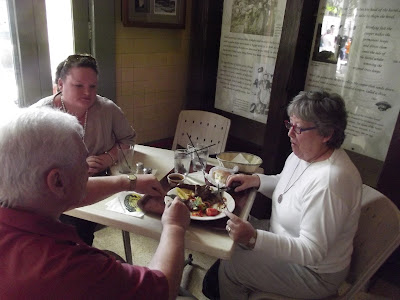 John and Margaret with Jane
John Lavery is a veritable mine of typewriter information. He arrived in Australia at the end of 1962 and worked for Olivetti in Melbourne. He knew everyone who worked in the typewriter business down there and some of his stories about their shenanigans were hilarious. 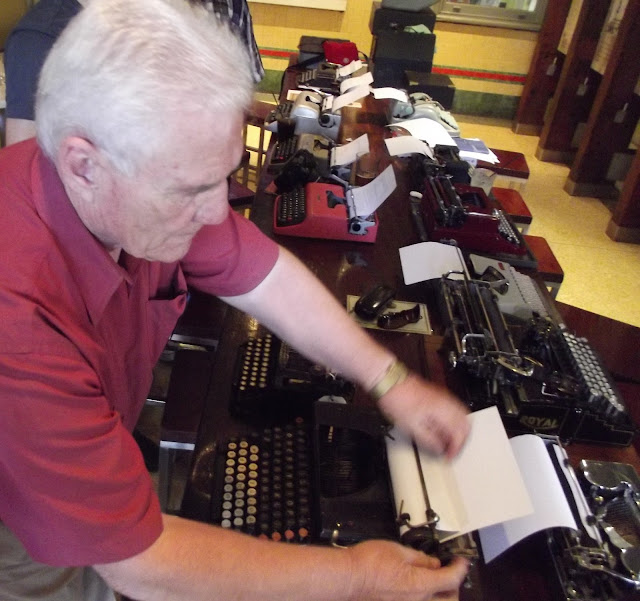 John Lavery
My favourite was the one about the Blickensderfer which suddenly "disappeared" from a typewriter store window display in Elgin Street, North Carlton. A day or so earlier, the agent for some local Mafioso had offered $2000 for it and been knocked back. 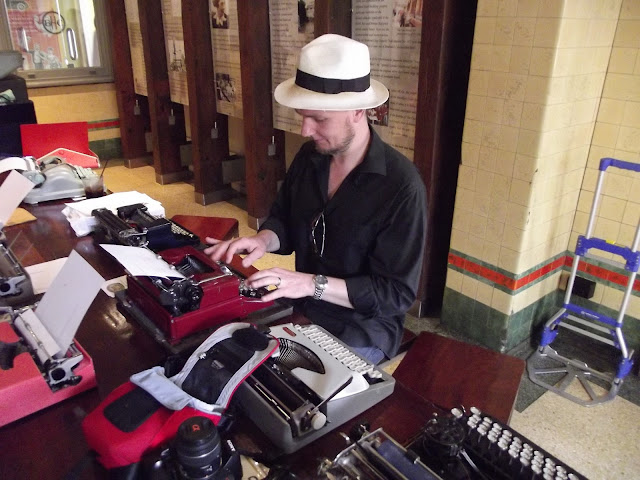 Rino Breebaart
It was wonderful to be able to shake the hand of people like John, Steve and Rino Breebaart and put a smiling face to their very familiar names. Of course I had met Scott in Canberra during my exhibition, but now I was also able to meet his charming partner Jane, as well as Kate, Louise and the delightful Margaret Lavery. What a memorable day!
I drove back to Surfer's Paradise last night feeling just so incredibly elated by the afternoon's events. We had decided to make it an annual event in Brisbane, to start a tradition. So here's to next year's Type-In, to doing it all again ... 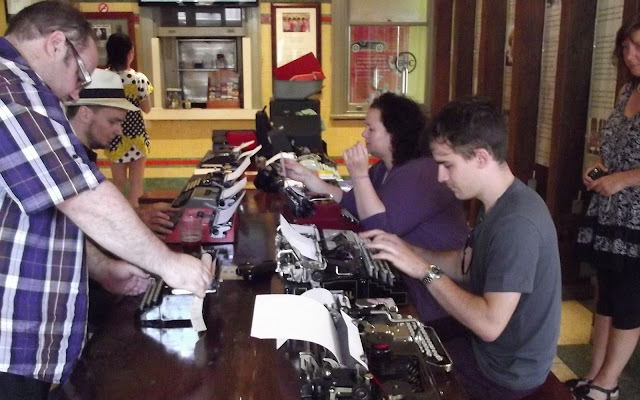 Posted by Robert Messenger at 09:12

It was a great afternoon - I enjoyed myself hugely. Also, it was really nice to finally meet - in the flesh - the people of the AU typosphere! Thanks for posting the photos, Robert.
rino

I love the Noiseless -- I must get a machine with that tiger decal someday! -- and am curious about the German mystery machine.

It was fun! And inspiring and educational. It was great to meet you and the other typewriter enthusiasts!

That's a great looking Noiseless. First one like that that I have seen.

Beautiful Noiseless and hurrah for a annual type in! I'll make sure to plan ahead for next year. ;)