On The Road With Typewriters: The 2013 Canberra to Brisbane Type-In Odyssey (7) 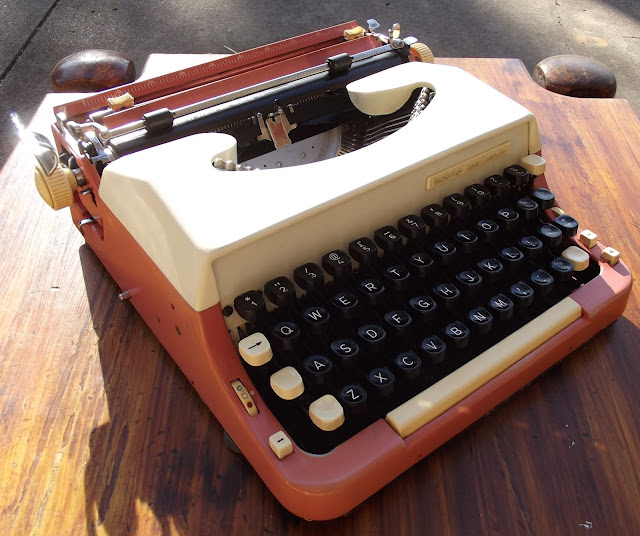 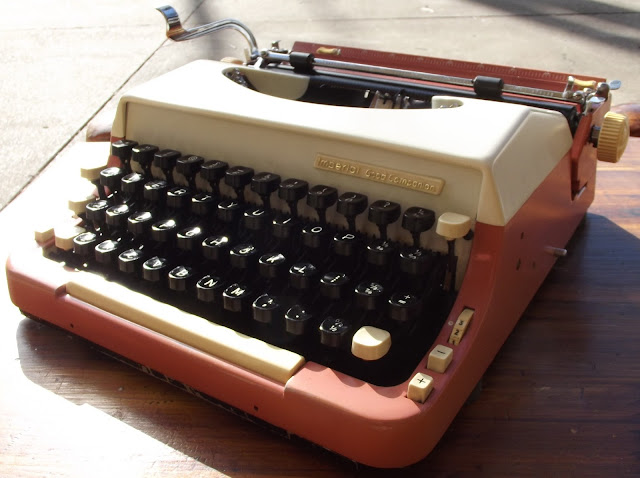 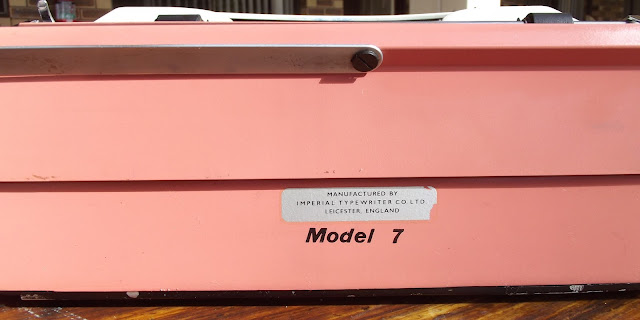 Basket shift
Black base tray extends out under the keyboard 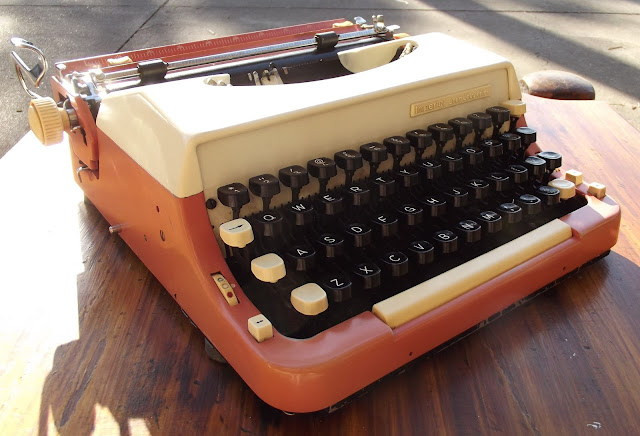 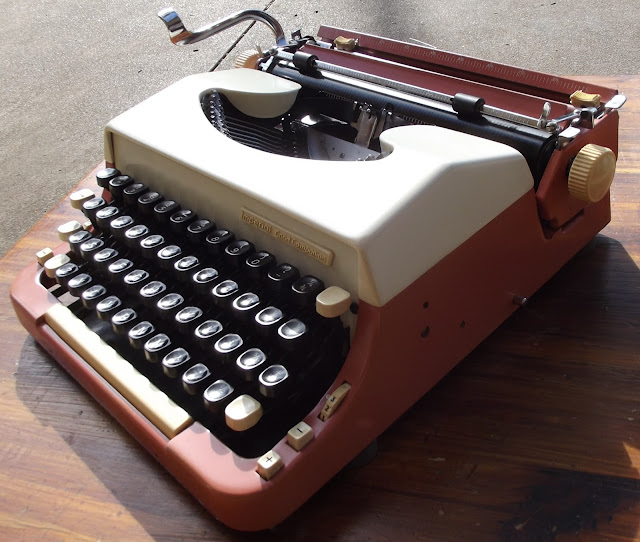 It was a long and winding road to Esk, but hopefully Esk will break my run of ducks as far as typewriters are concerned.
One of the unexpected delights of this odyssey is that Queensland road authorities have, in an effort to keep drivers alert and to stop them falling asleep at the wheel, placed trivia questions beside the highways.
This is a serious attempt to beat driving drowsiness and save lives. Between signs with questions and those with answers are urgings to keep "concentrating on the questions" and "continuing the quiz" as, the authorities insist, "this can save your life", it could be a "matter of life or death". I'd never previously imagined a trivia quiz might be a lifesaver. but I think this is a fantastic innovation.
The first question I encountered along the way was: "What is Queensland's oldest town?" It turns out this is a contentious point. The answer given, much to my surprise, was Gayndah, a town I knew very little about (or indeed knew where it was). It turns out it wasn't that far west of where I was staying, in Hervey Bay, so I determined to visit it. In the meantime, however, I began to question the answer. Between the question and answer signs, I had been thinking Ipswich or Maryborough. Ipswich was established in 1846 and Maryborough in 1847. Brisbane seemed too obvious an answer, yet it has been around since 1824. Gayndah was established in 1849. So what was the catch? In Gayndah I was told that it was Queensland's "oldest town that is still a town" (and not designated a city).
Before setting off from Hervey Bay for Gayndah, backtracking through Childers, I was firmly assured, "There's nothing there." There is plenty there - it's a lovely, thriving little town, much more alive than Biggenden or indeed Ban Ban Springs.
As I headed south I stopped in Goomeri, where some helpful people advised me where I might find typewriters in this part of the South Burnett district. So I sidetracked to Kilkivan, where an Olivetti Studio 44 in good condition had a $139 price tag on it, about double what I'd be prepared to pay, at most. Another store had an Nakajima electronic. After five days without a "new" typewriter, and feeling badly in need of a change of luck, I must admit I was sorely tempted, but again I left town empty-handed. (It surprised me just how many electronic typewriters were on offer in bric-a-brac and op shops.)
After five hours on the road, in Murgon I was told of a Remington in Wondai. "Wonderful Wondai" I thought as I rushed off down the Bunya Highway. Crossing Dingo Creek into town, I was certain my run of outs had ended. But the Remington had been sold the day before. A by-now familiar story. 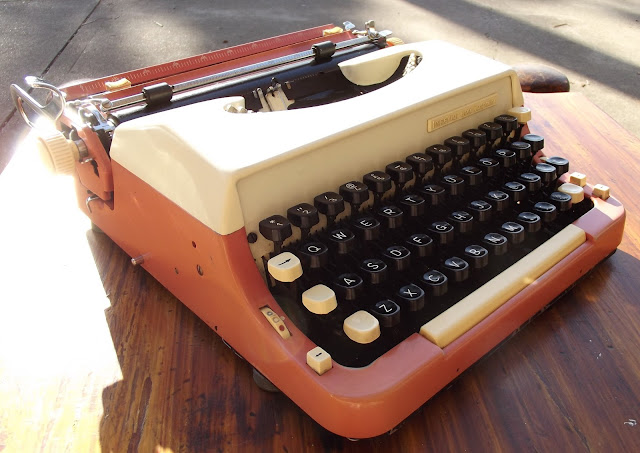 Now I was in "Peanut and Navy Bean Country". Kingaroy is possibly more famous for once being the home district of Queensland's notorious New Zealand-born premier, Sir John Bjelke-Petersen and his senator wife Flo. We had our own "Flo-Joh" show, but it wasn't racy at all - in fact quite the opposite. "Flo-Jo" might have been lucky to be allowed to run here under Sir Joh's iron-fisted, corrupt rule. Long, brightly-painted fingernails weren't allowed. Too easy to get dirt under them while harvesting peanuts and collecting graft.
Someone at the Type-In in Brisbane last Sunday told me Queensland was sadly now returning to those bad old days under Sir Joh. However true that may be, Kingaroy offered no typewriter joy. People kept telling me that if I stayed over a night in their town, they might be able to rustle up a typewriter, but I kept moving south. The off-chance of a Brother didn't appeal at all.
Based on what I was told in Goomeri, Nanango offered the greatest hope. But the ladies in the saddlery there said, "Sorry, no. They don't last long [in the store] you know." One did offer some small encouragement. "I bet," she said, "that the last place you look will the one that have a typewriter in it." So, heading for Esk through Blackbutt, I stopped at the Vinnie's in Yarraman. "No typewriters today," the old lady said. How right she was.
In Esk, yet again I had to take a typewriter out of the back of the station wagon in order the typecast. 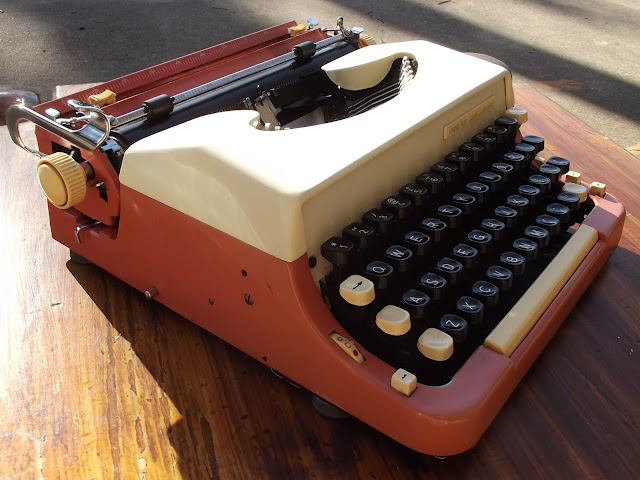 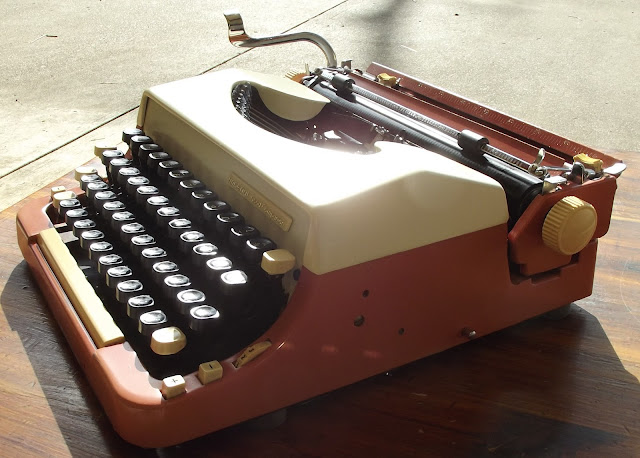 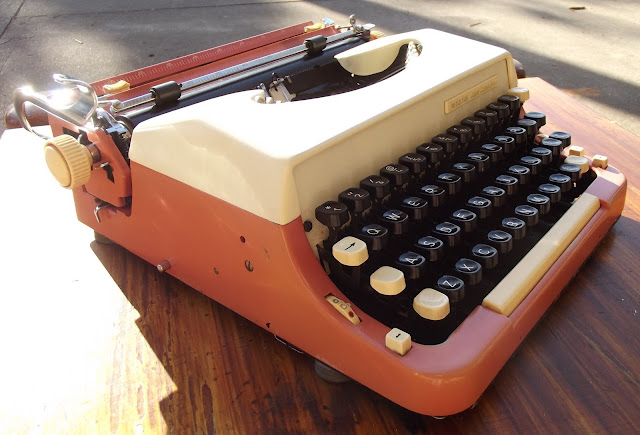 Posted by Robert Messenger at 11:11

On the bright side, you're having a fantastic trip across places I dream I'll be able to see at least once in my life. And you're taking us along thanks to your great reporting of the trip! Thanks a lot for that!

Good looking GC7. I hope you'll have some more luck in your hunting.

Not seen a 7 before. Amazing how different it looks to the 5, and then how similar from the neck down. The bash-tray on the underside is an EXCELLENT idea to protect its fragile nether parts. I bet it types as smoothly as a 5 too.

I absolutely love that route through Biggenden to Esk. It is a beautiful part of the country.

And yes... Queensland really does feel like it is returning to the old days of Joh.