On The Road With Typewriters: The 2013 Canberra to Brisbane Type-In Odyssey (9 & Last) 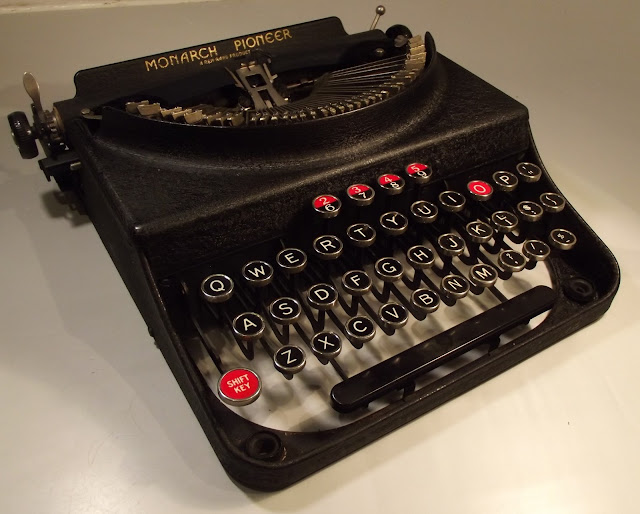 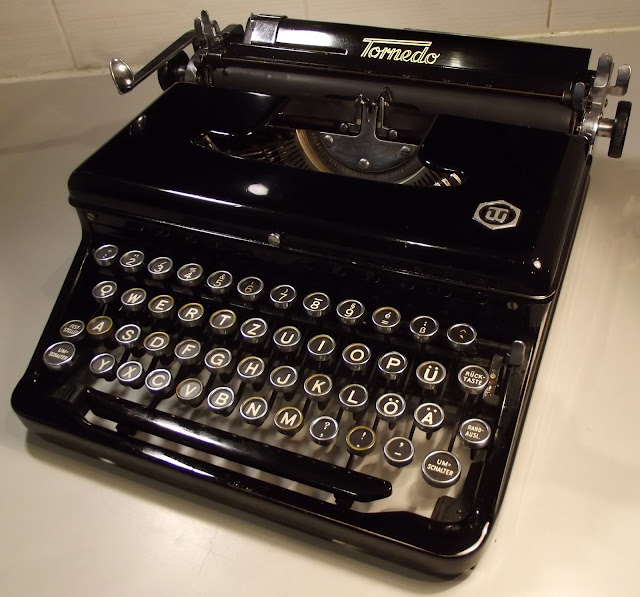 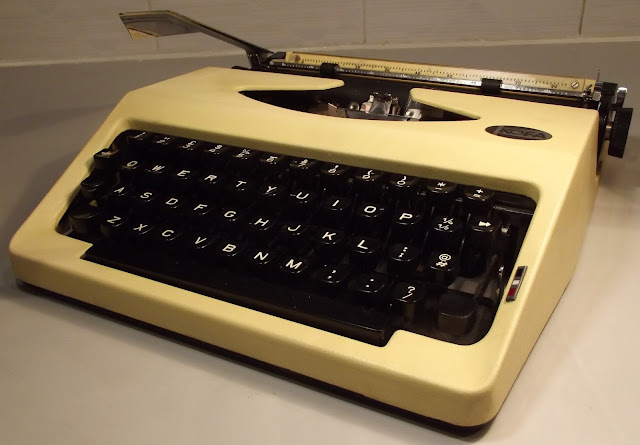 As flagged yesterday, I arrived home this evening to find three "new" old typewriters: a 1937 Monarch Pioneer, a 1949 Torpedo Modell 18 and a "modern" Kofa Model 100 (aka Jordi Traveller). I plan to go into more detail on these models at a later date - the Monarch Pioneer as part of a post on 1930s "basic" Remingtons and the Torpedo in another look at that German company's wonderful range of portables.
Suffice to say in the meantime that the Monarch Pioneer, serial number C108005,  is described as being "embarrassingly basic", has a three-and-a-half bank keyboard, and is one of 17,500 made between October 1937 and January 1938. It has no carriage return lever. For all that, I adore it. The Torpedo is apparently an earlier (1949-51) variation of the better-known Modell 18 (and 18B) - the export version of which was a Blue Bird. The Kofa is a truly weird Chinese combination of the Olympia SF/Traveller carriage and Adler-Triumph Tippa mechanics. 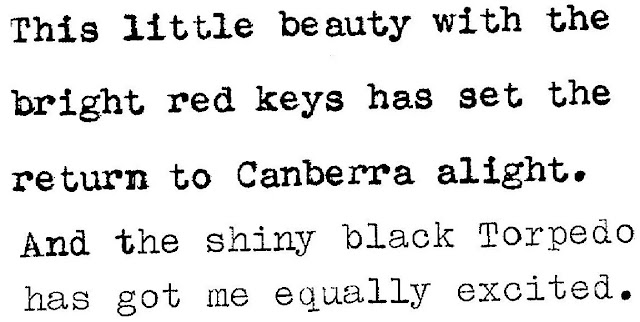 I thought I'd got the timing for my last day on the road absolutely spot-on. Having managed to spend an extra night in Queensland, catching up with old friends in Brisbane on Saturday, the final leg of the odyssey would be a Monday. Perfect to pick up the mystery typewriter at the Old Bakery in Cundletown, the one I'd spotted through a cob-webbed window 10 days earlier, after leaving Taree headed for Surfer's Paradise.
I checked out of my Kempsey motel at 8.30am. The receptionist directed me to an antiques shop on the way out of town. It was closed, but I could see no typewriters there anyway. I determined there would be no further distractions, no more stops before Cundletown. That was the machine I really wanted.
Approaching Taree, I sidetracked off the Pacific Highway to reach Cundletown at 9.40. But the Old Bakery was still unopened. Fearing this might be the case, I'd taken the precaution the night before of getting a mobile phone number from the White Pages.
I peered in through the spider's window. The mystery typewriter was still there, but it looked as if it had been shifted, turned so it was facing more toward the window, to allow a much better view of it. Maybe the shop owner had read my blog, and was keen to do business. I could make out the carriage - it appeared more and more like an Olympia semi-portable, yet not a  model I'd seen before.
A note on the door said, "Open Mondays and Tuesdays, 9.30-4pm". There was also a landline number. I had already tried the mobile number, and got no answer. So I called the landline. A man answered. He explained he was on a farm, threequarters of an hour away from Cundletown. He was clearly not keen to come into town and open the store. The antiques shop was his daughter's, he explained, but she'd lost interest in it and he was trying to get rid of the stock. He apologised profusely for the inconvenience, and offered what were completely unsatisfactory options. It was already quite evident that I going to go away from Cundletown empty-handed, that the mystery typewriter was not leaving that run-down shambles of a shop. Not with me, anyway, not this morning.
I filled the tank, complaining bitterly as I did so to the petrol station owner about the way Old Bakery did business. He feigned interest and said, "I've never seen it open".  And with that I set off again - Canberra would be my next stop, my last stop of this 3500-kilometre road trip.
Six hours later I was home. Charlie the Typewriter Guard Cat didn't want to know me. But he did give a cursory nod in the direction of three packages. Thank goodness I had something to play with.

That's a beautiful Pioneer and Torpedo! Very nice. (No comment on the Kofa.)

Pity about the Cundletown Mystery Machine. I studied your photo earlier and it did look Olympia-esque, but I couldn't be sure.

Glad to hear you made it home safely and that the trip was very fruitful.

Congratulations on the magnificent machines you added to your collection; I think the blue Corona, the Urania Piccola, the Remingtons, the adventure with that funny kangaroo, the fantastic landscapes, the beautiful birds and the sheer experience of the type-in make up for the loss of that unidentified machine. And yes, I hope I'll be able to visit Oz at least once in my lifetime; that's one of the experiences I want to take with me. And the fantastic journal you gave us of your trip convinced me even more of visiting!

Thank you so much for sharing the adventures and the pictures from your trip, I for one almost could feel like I was there.

That Monarch Pioneer is stunning. Glad to see you got home safely!

The KOFA typewriter as displayed is better known as Hero Typewriter in China. The Shanghai Typewriter Factory began to produce these machines since late 1970s. During the first several years, however, they were named Flying Fish. They were imitations of Adler Tippa according to a "Typing Coursebook" of mine.

As a communist tagline famously put: "In modern history, China suffered from enduring impoverishment and long-time debility and was at a time at the mercy of foreign powers.” And “Lagging behind leaves one vulnerable to foreign attacks, a never forgotten-lesson we've learned from our tragic past of foreign aggression", a line that has literally whipped the whole nation to work its ass off for the last three decades. Hero typewriters came to existence precisely when China aggressively launched its opening-up and reform policy with a view to regaining the country’s past glory and its due international standing. Foreign trade was thought to be a way to make quick money. That's how learning foreign languages, especially English and other vocational skills essential for modern commerce, such as typing, became important.

The Shanghai No.2 typewriter factory, branched out of a horology and precision equipment business, was a household name at least in the stationary business. Later, it became a huge conglomerate encompassing pen, pencils, paint, stretching as far as real estate at the beginning of 21st century. Recently, news has it that the business empire collapsed and fell prey to acquisition deal. China has three typewriter factories, all based in Shanghai, the country’s most cosmopolitan city. Later, the Shanghai Typewriter Factory was ordered to become two independent factories, the Shanghai Typewriter Factory and Shanghai No. 2 Typewriter Factory. The former started to produce typewriters under the name Flying Fish, which is essentially Adler Cotessa, while the latter under Hero same as the one shown in the pic. There are variants in ensuing years, but all essentially same in design, with TP900 an only exception. Flying Fish also produced desktop models, which, according to a typewriter engineer friend of mine, has the carriage of Remington and body of a Underwood Gold Touch. In mid-1980s, Shanghai Hang Kong Engine Factory (which means aviation, Romanized Chinese pinyin) was founded to produce Hang Kong typewriters, imitations of later-version of basket-shift Brother Typewriters of Japan. Under the command economy, all three brand-names were exported under the “unified code” KOFA.

My two-cents, hehe…. Thanks Mr. Messenger for keeping this blog, so that I could immerse myself in the kingdom of typewriters every night. In order to view your website and other typewriter lovers, I have to pay for a VPN. I know it’s unheard of in democratic countries; it is a special software to circumvent Great China Firewall which the communists use to block “politically sensitive websites” blogspot included.

I dig my little KOFA, just like yours! Maybe a bit of a pathetic, Frankensteinian thing, but I still like it.

"embarrassingly basic", I like it just because of that phrase. The Torpedo is also very handsome!

Charlie will change his mind about you when you show him your new finds. Especially those with cases will quickly get his love back again.

Great research you have done. I looking for a brand-new typewriter and the Kofa's certainly seem to be okay typewriters. Wonder what the major differences are between the Kofa 100, 300 and the 626TAS? Which one would you recommend? Thanks.