No Typewriter Ever Violated Me 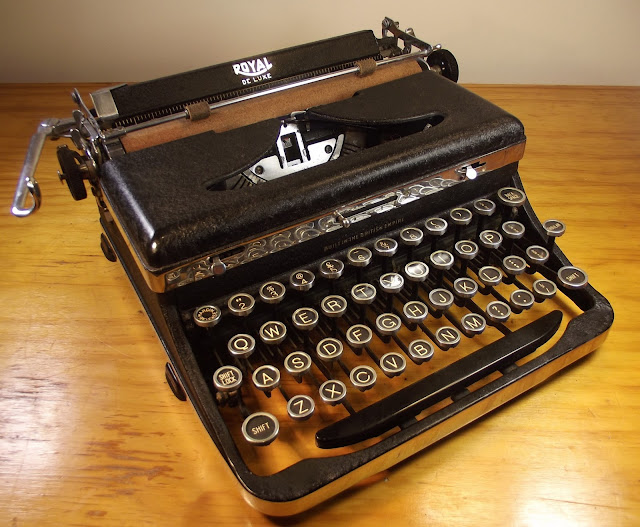 This 1937 Canadian-made ("Built in the British Empire") cork-platened Model A Royal De Luxe portable typewriter, serial number A-689650, was given to me in 2011 by leading Australian war historian, Professor Bill Gammage*. It was sold to Bill's father by Sydney Pincombe Pty Ltd of Sydney in 1938, four years before Bill was born in Orange, New South Wales. Bill went on to research and write about the fight for rights and justice in Turkey and Australia. 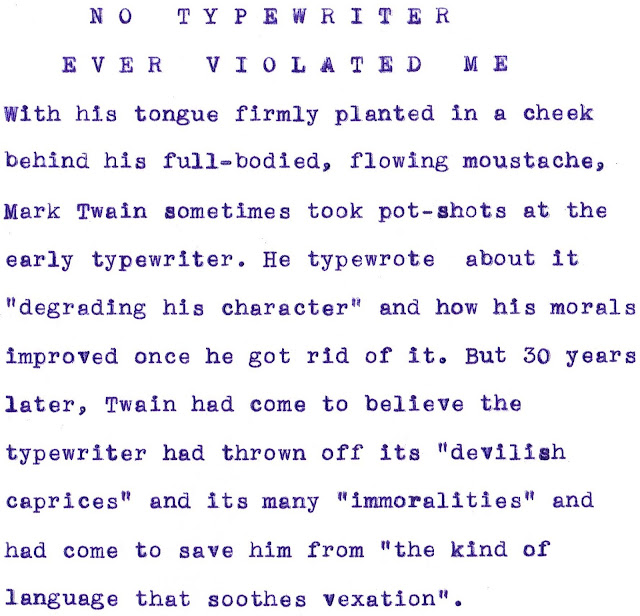 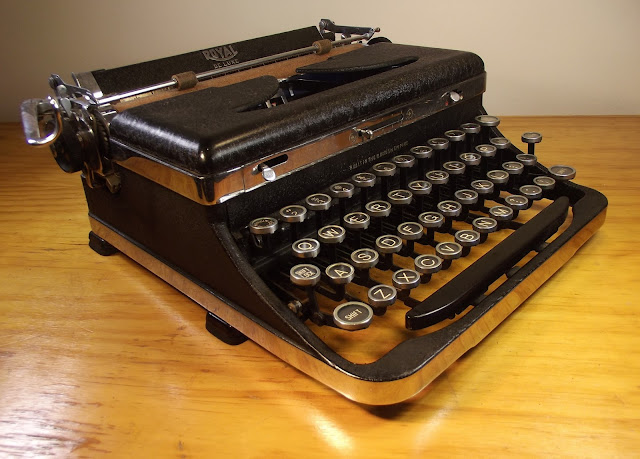 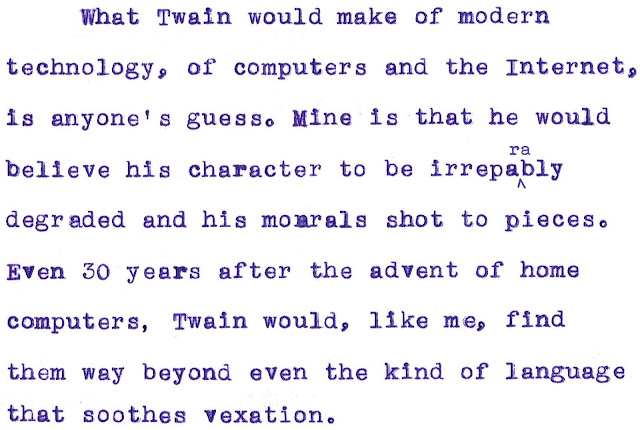 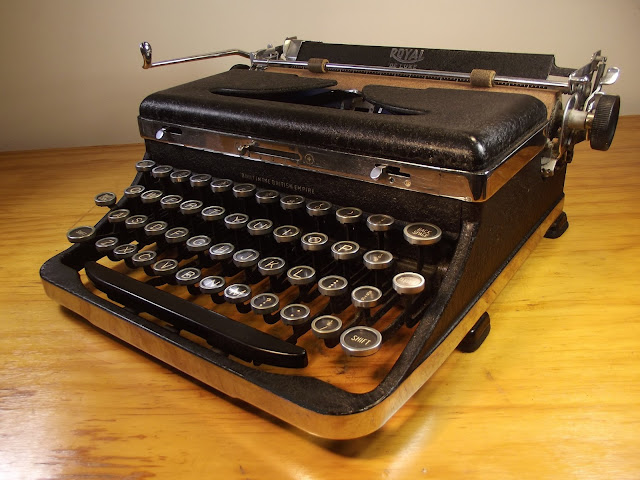 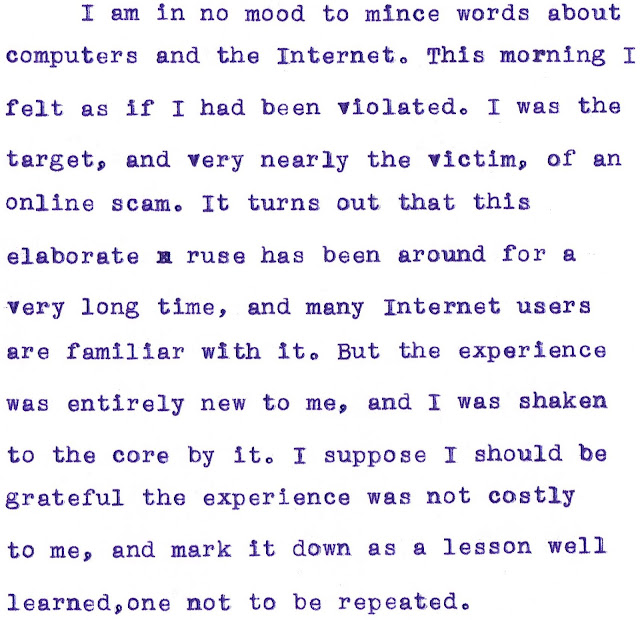 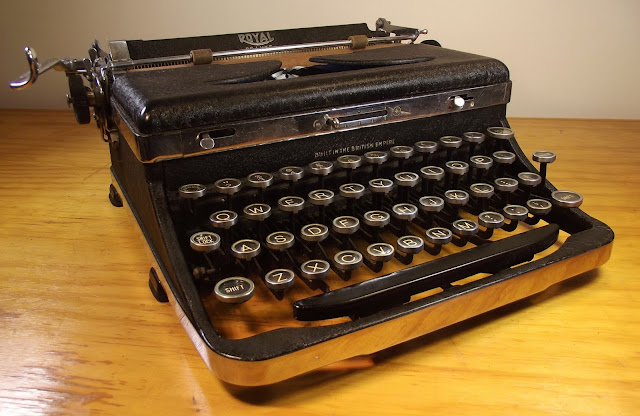 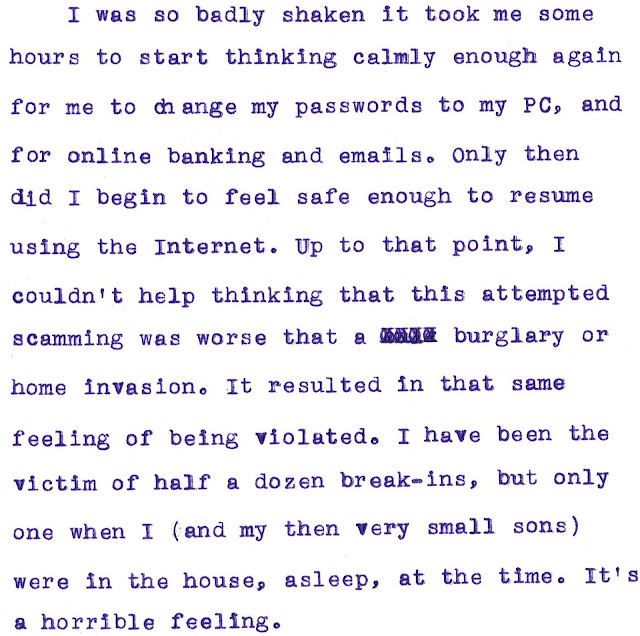 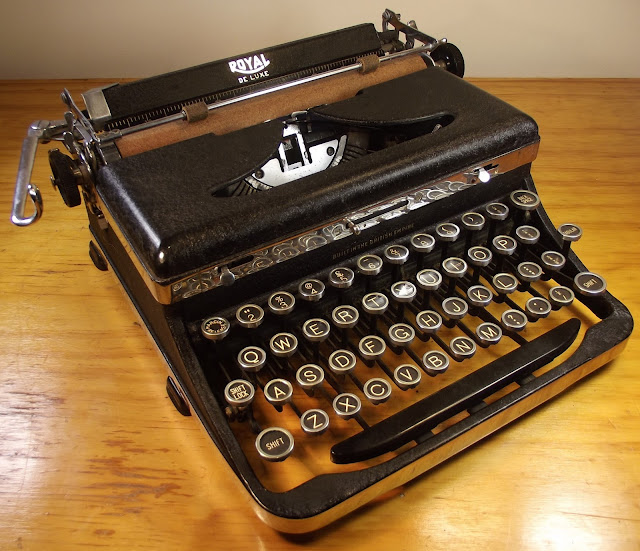 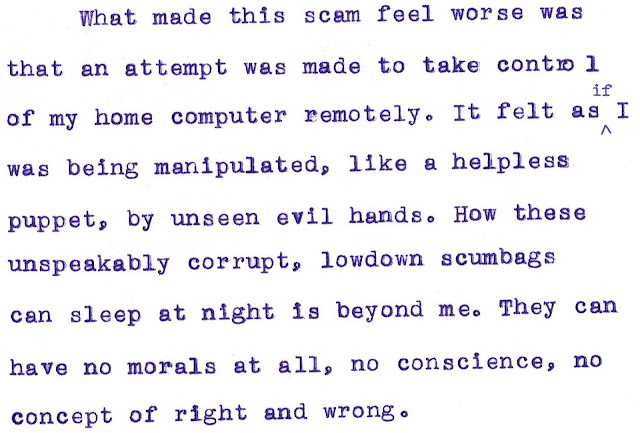 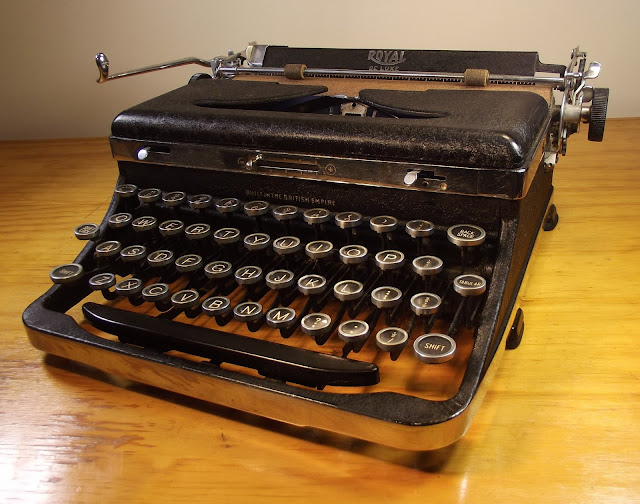 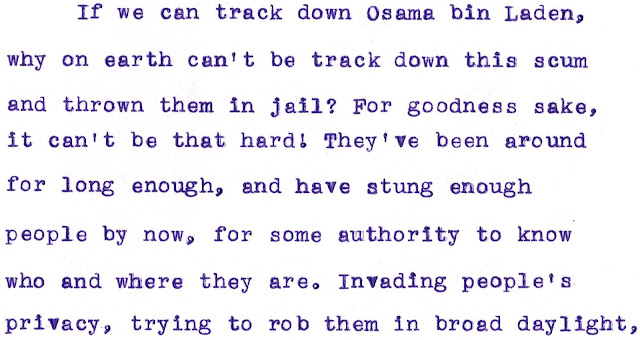 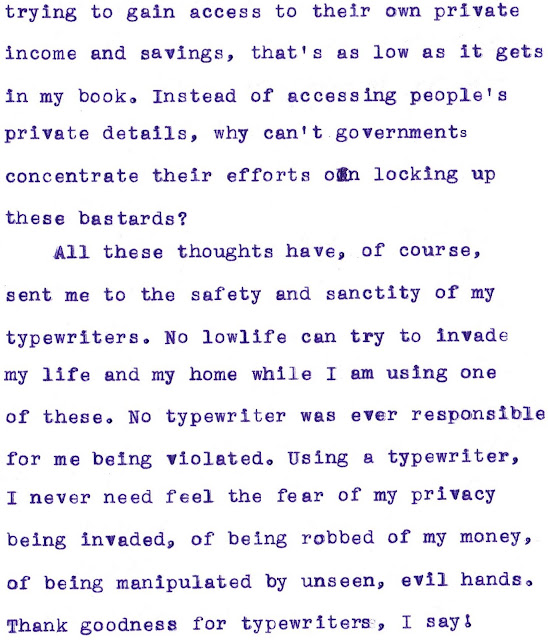 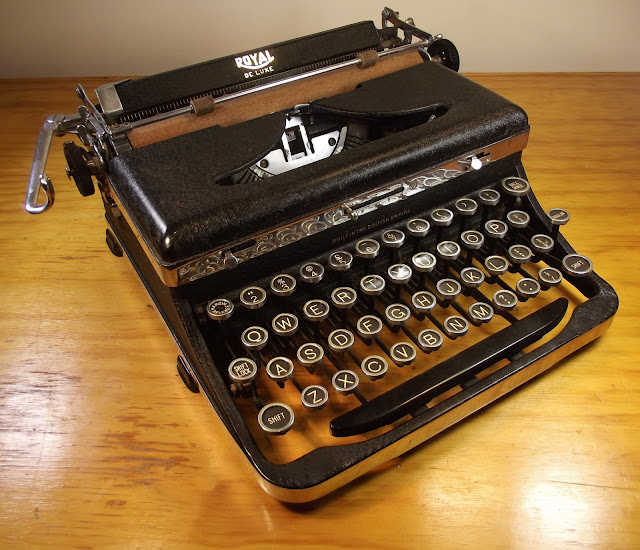 At the root of my vulnerability to this cyber attack was my frustration in not being able to get rid of the "MyStart" extension from Google Chrome. After all this drama was over, I finally found how easy it was to get rid of it - only adding to the annoyance of the whole thing.  Earlier, through the control panel on my computer, I had been directed to a program which promised to clean "IncrediBar" off my machine for good - at a cost of $US40. Having scanned my computer with this "SpeedMaxPc" program, and apparently having "fixed" a range of problems, I then received the phone call from the scammers. Under the impression that "SpeedMaxPc" was a Microsoft-approved program, I was therefore "open" to the suggestion from the scammers that several problems had been reported to Microsoft. The scammers' timing was, by sheer chance, perfect. This YouTube video shows exactly what happened to me: 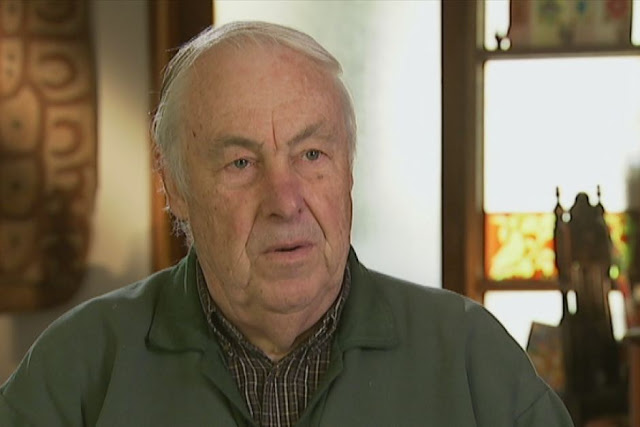 *William Leonard "Bill" Gammage AM was born in Orange, New South Wales, in 1942. He is an Australian academic historian, Adjunct Professor and Senior Research Fellow at the Humanities Research Centre of the Australian National University in Canberra. He went to Wagga Wagga High School and then to ANU. He was on the faculty of the University of Papua New Guinea and the University of Adelaide. He is a fellow of the Australian Academy of Social Sciences and deputy chair of the National Museum of Australia. Gammage is best known for his book The Broken Years: Australian Soldiers in the Great War, which is based on his PhD thesis written while at the ANU. It was first published in 1974, and re-printed in 1975, 1980, 1981 (the year in which Peter Weir's film, Gallipoli, came out), 1985 and 1990. The study revives the tradition of C.E.W. Bean (who used a Corona 3 portable typewriter). Bean was Australia's official historian of World War I, one who focused his narrative on the men in the line rather than the strategies of generals. Gammage corresponded with 272 Great War veterans, and consulted the personal records of another 728, mostly at the Australian War Memorial. He has written several other books about the experiences of soldiers in World War I, including three definitive books about Australian soldiers in the war. In 1998, Gammage joined the Humanities Research Centre at the ANU as a senior research fellow for the Australian Research Council, working on the history of Aboriginal land management. His scope was cross-disciplinary, working "across fields as disparate as history, anthropology and botany". In the subsequent 13-year period he researched and wrote the book The Biggest Estate on Earth: How Aborigines made Australia, released in October 2011. It won the 2012 Prime Minister's Prize for Australian History in the Prime Minister's Literary Awards. As a historical adviser on Gallipoli, Gammage has worked on many documentaries and his writing is cited as an authoritative source on Australia's participation in World War I. For the film Gallipoli, Gammage was employed as the military adviser and he worked on the text that Australia's leading playwright  David Williamson turned into the screenplay for the film. In 2005 Gammage was made a Member of the Order of Australia.
Perhaps it may seem ironic that I have used for this typecast a typewriter given to me by an expert on Gallipoli and World War I, a war in which Australians fought and died for freedom. Freedom to do what? To use the Internet and in doing so innocently fall prey to cyber attacks from such vicious, nasty, shit-rotten criminals? What sort of freedom is that? Americans, Australians and New Zealanders died in their tens of thousands in two world wars to preserve law, order and justice - and we finish up with this!

Posted by Robert Messenger at 14:29

How awful. I hope that the sight of your beautiful Royal Quiet Deluxe has been able to lift your spirit after this unpleasant violation. These sort of criminals are disgusting (and that's coming from a former criminal defence solicitor who has met more than his fair share of murderers, rapists, and other miscreants). Shame on them.

I find it as disturbing as you do that our priorities are not on the real harm these scum are doing. Glad you got out with relatively light damage.

How rotten! I'm glad that the damage was minor. Unfortunately there seems to be an unlimited supply of con artists online, sending billions of phishing messages every day, setting up fake websites, etc.

Sorry you got hit. Some people are just marginal examples of Homo Sapiens.

The Royal is lovely and will never let you down! Kind of like Arnold in Terminator 2. Or something like that.

It doesn't matter how savvy we are, it is still all too easy to get pulled into these things. We tend to trust other people, you know? I got pulled into a phishing trip that caught my bank account password by an email that looked, down to the logo and the language, just like what my bank would send. Fortunately I realized what i had done immediately and got things fixed before all $12 in the account was gone. But really, it can happen so easily. Hopefully i am wiser now.

That cork platten - I am pretty new to this typewriter thing, but isn't that pretty unusual? Apparently it holds up. I wonder if it sounds different, or affects the look of the imprint for better or worse. Sure looks cool.

These scumbags invading privacy, includes the government right? They can't do anything about it, because they are too busy invading privacy themselves. At least in the USA and Europe they are, don't know (yet) about Australia.

It's very sad that you fell victim to an online scam. You are right that these kind of people don't have any morals. Otherwise you would use the same technology to make things saver so private information doesn't get leaked. Some of these little scumbags are, by fact, very young people learning new tricks on their laptops without having learned the boundaries. Others sadly did grow up and continued the scamming and spamming... :-(

I do have to add how appropriate it is that you have pounded out this vehement post on a typewriter (with a cork platen, no less) that was owned and used by a man who chronicled the fight for rights and justice in Turkey. Taksim Square and Gezi Park in Istanbul are today the center of a new fight for rights and justice -- so your timing is spot on.

Finally, may I propose that the typosphere adopt your rallying cry for a T-shirt: "No Typewriter Ever Violated Me."

Jerks. Sorry that happened to you, but seeing a cork platen would lighten my spirits quickly.