My Typewriter Day gift to myself.
Happy Typewriter Day, Typospherians!
(I hope you all got to type on a machine you found to be as nice as I found this one) 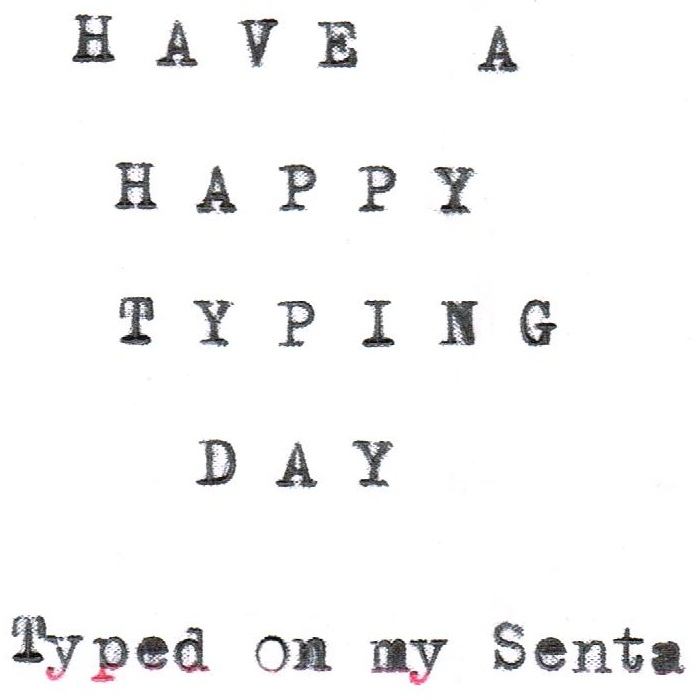 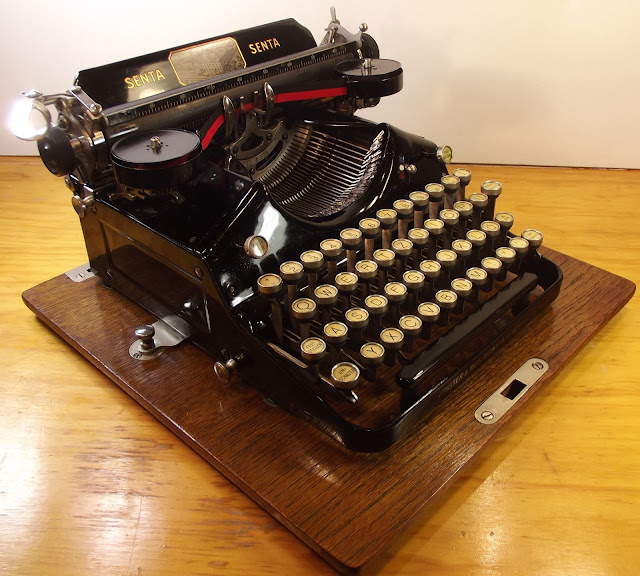 The Senta portable typewriter was designed by Franz Kraudzun, who was born in Königsberg in Prussia on July 20, 1885.

Franz Kraudzun
According to Ernst Martin, Kraudzun spent many years trying to find a company to make his typewriters. 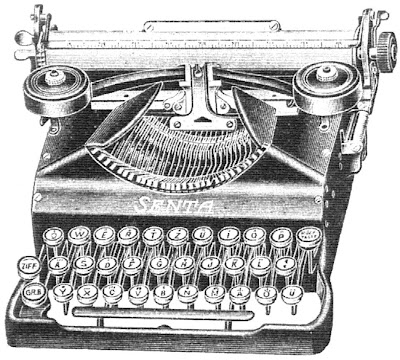 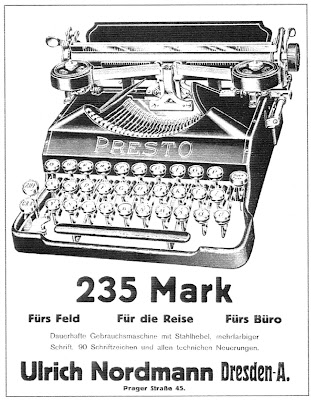 From 1921 the Senta was also marketed as the Presto by a Dresden company and in Bulgaria as the Balkan. 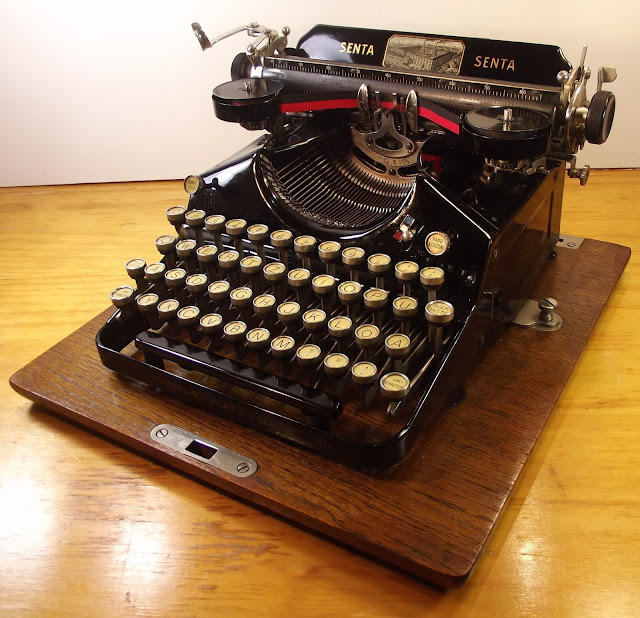 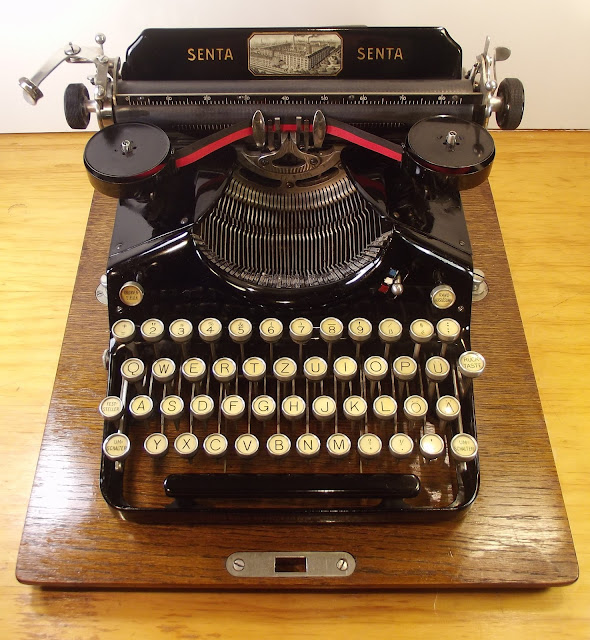 In 1926, the Model 4 Senta, with a four-bank keyboard, reached the market, but its lifespan was short, as Frister & Rossmann AG went into liquidation in 1929. 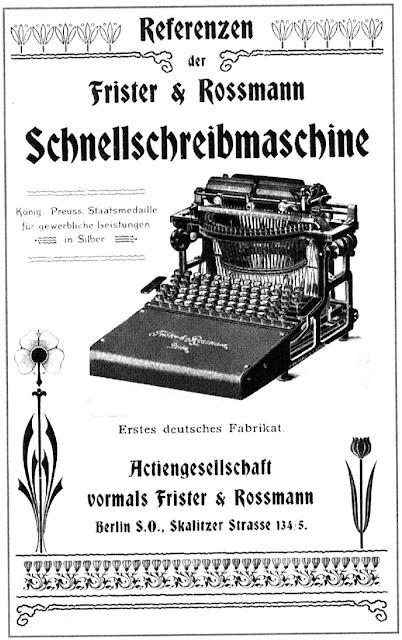 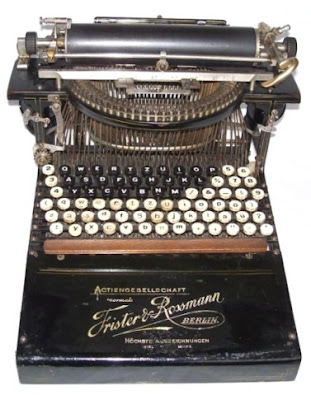 Arnold Betzwieser Collection
Frister & Rossmann AG had branched into typewriters in 1892, when it gained the rights to reproduce the Caligraph under its own name. It also sold Lee Burridge's Sun and Ed Hess's Royal Standard through to the Model 10. 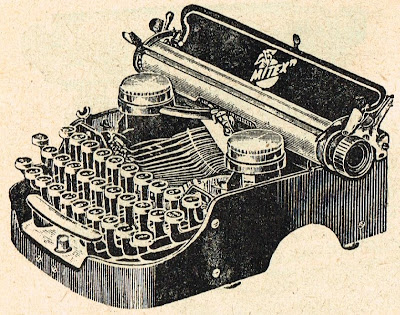 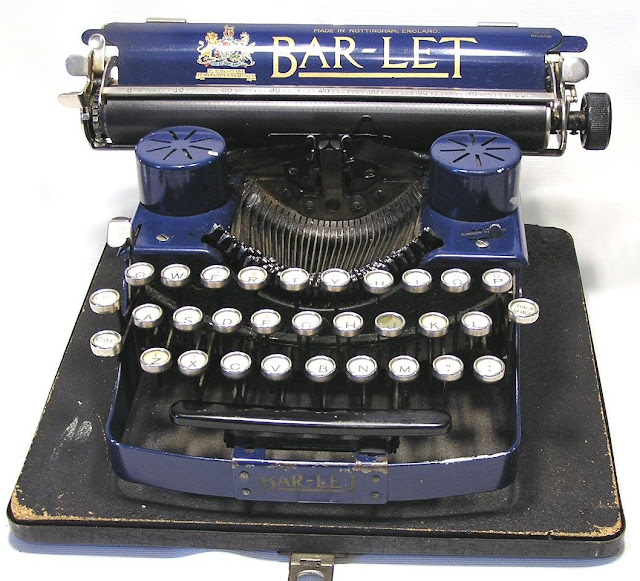 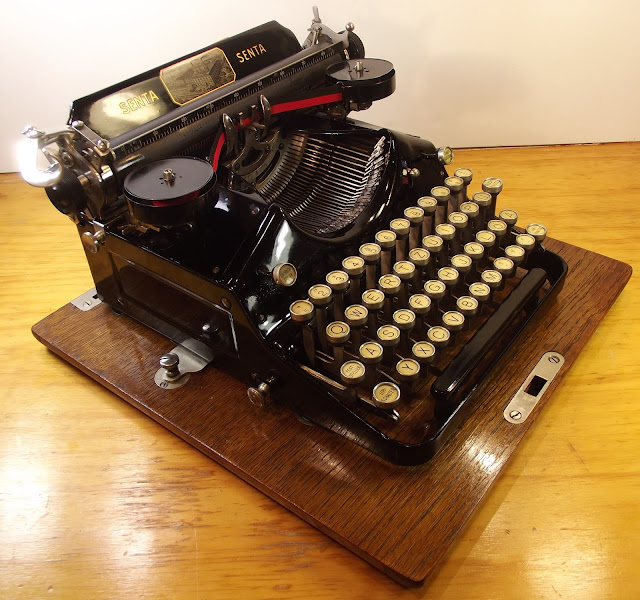 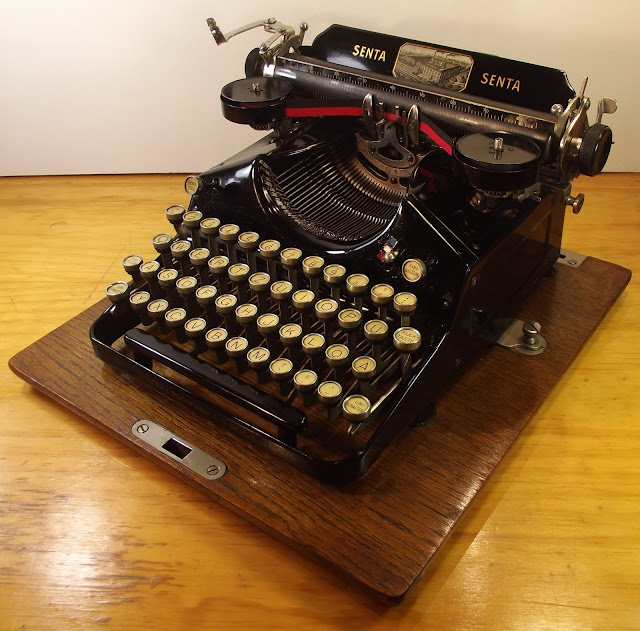 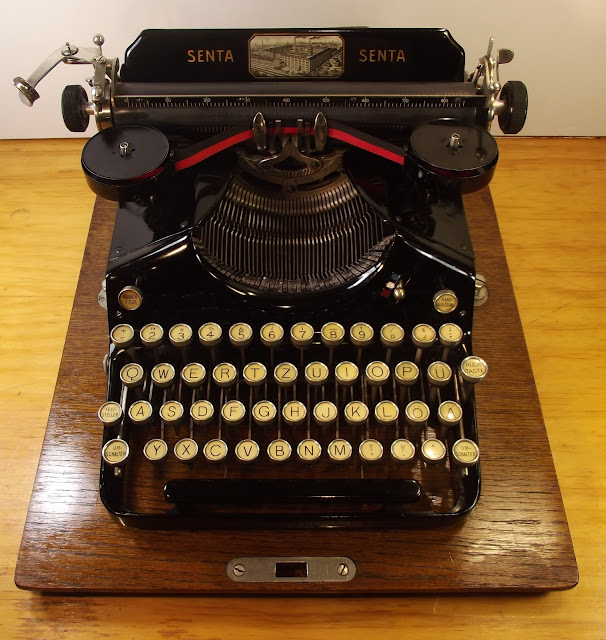 In 1931 the rights to the Mitex design went to the Bar-Lock Typewriter Company in Nottingham, England. This company had been set up by William Richardson in 1914 to make Charles Spiro's Bar-Lock. Richardson opened a factory in Nottingham in 1919 to make a Herbert Etheridge- designed frontstrike Bar-Lock, but then sold the plant to Ernest (not John) Jardine in 1925. A Bar-Let Model 2 followed in 1936. 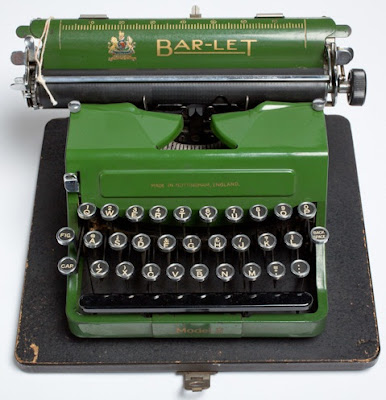 It seems to me ironic that the British Bar-Lock Company started out making a machine designed by a Prussian-born inventor (Spiro) and ended up by making a typewriter designed by another Prussian. Kraudzun died on September 15, 1943. 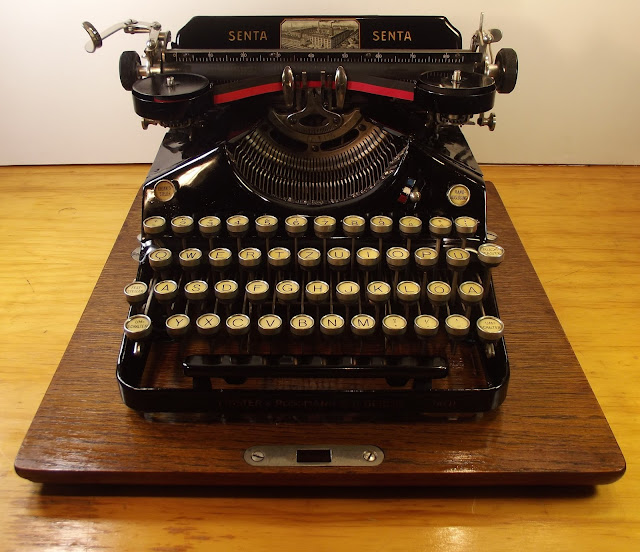 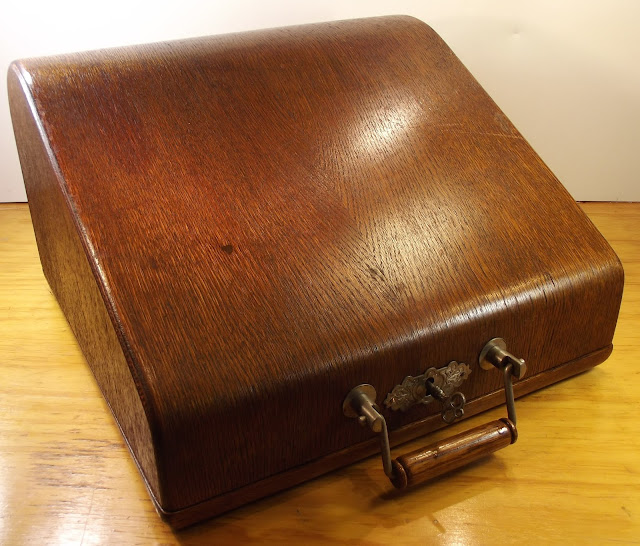 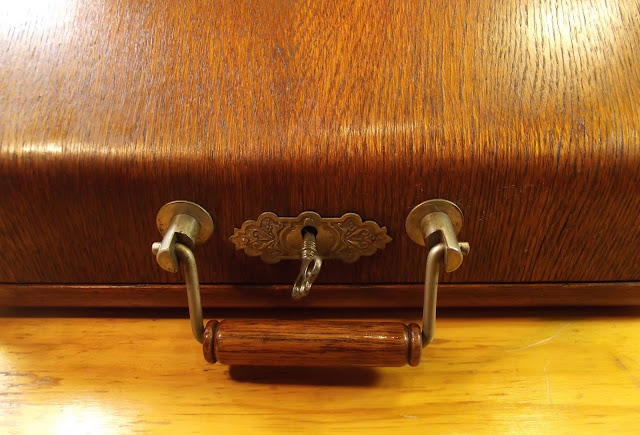 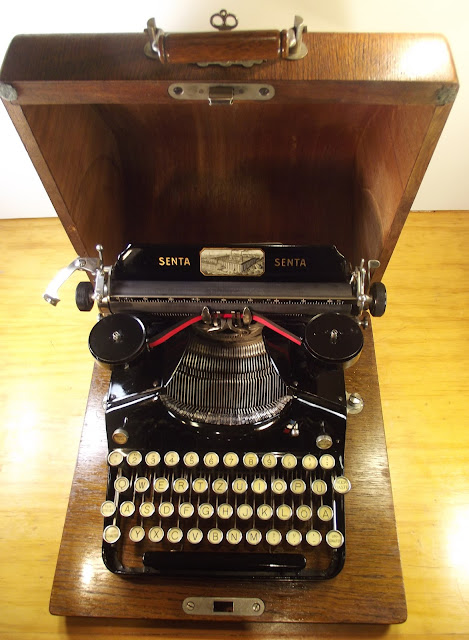 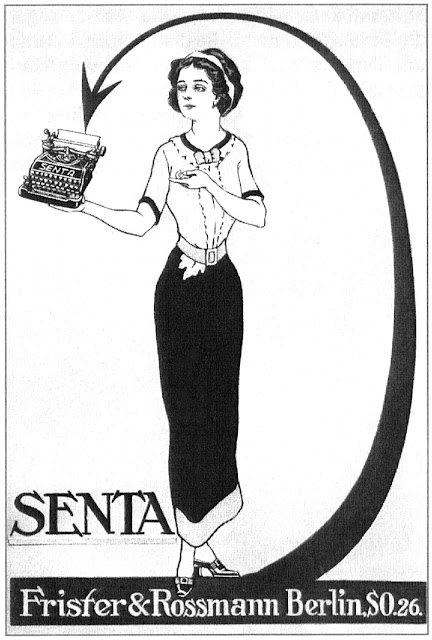 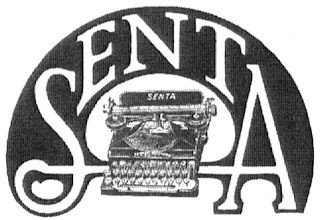 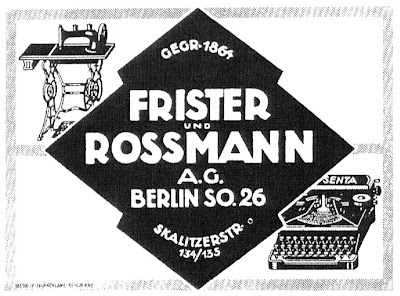 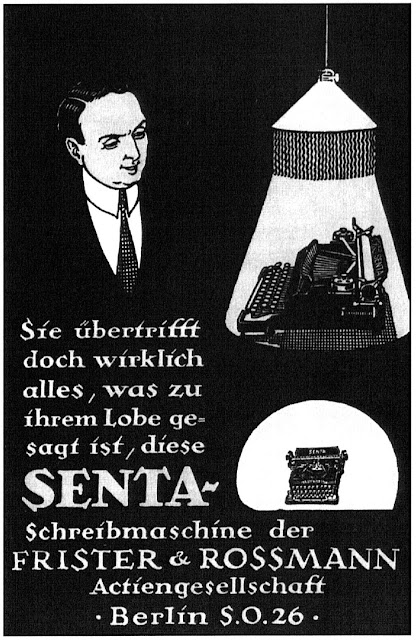 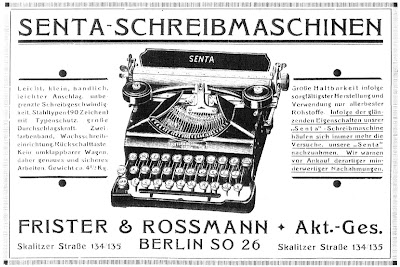 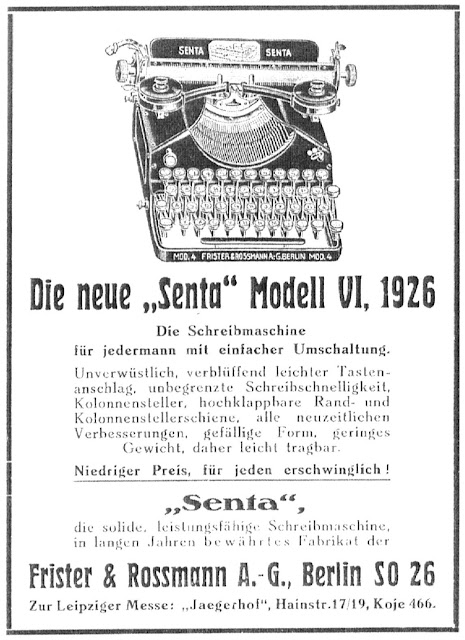 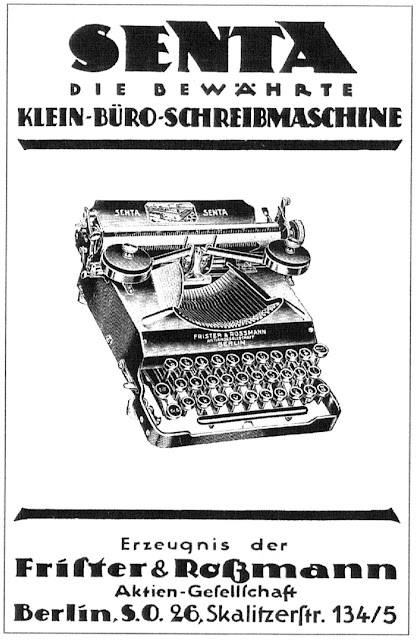 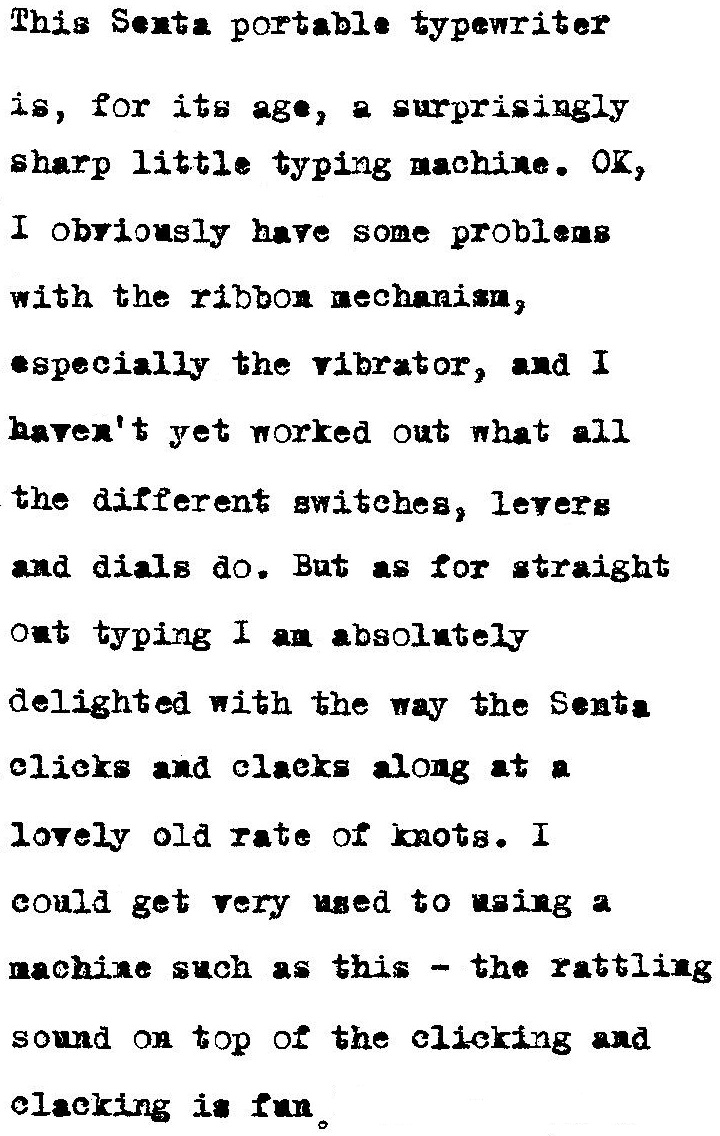 Posted by Robert Messenger at 21:37

That is one gorgeous typewriter! How attractive. And some of that marketing material is so very of the era. I love it.

Congratulations! Your Senta came with a lovely case. What's the serial number? (Mine is 48051.)

Just lovely, and the case too.
World Typewriter Day cheers!

Ooooh! Wonderful! You are very blessed to own such a machine. Congratz!

A gift to yourself? Generousity must begin at home. It looks immaculate and stunning, all the way down to the drop handle on the case and the lithograph on the paer table. And thanks for the insight into Bar-Lock. A stranger typewriter I have yet to see than the Bar-Let Model 2. Still can't figure out why the carriage pivots back the way it does (though it is a net party piece). Belated TWD2013.