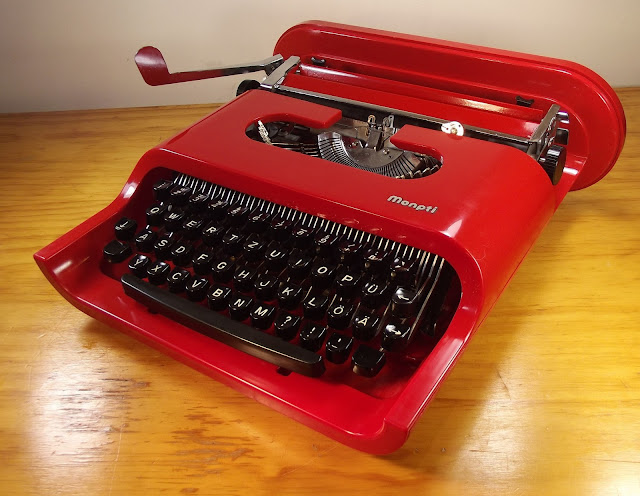 This Monpti arrived here about an hour ago and I am so excited to at long, long last get my hands on a Monpti I haven't even found time yet to put a ribbon in it, let alone test type with it. I promise I will typecast with it, but first I'll break the rule of a lifetime and actually read the instructions before using it. A very special thanks to Peter Muckermann in Germany for getting this Monpti to me so swiftly and safely. The seller wasn't prepared to ship it to me in Australia because "filling out forms is boring". Happily, his typewriter is anything but boring. 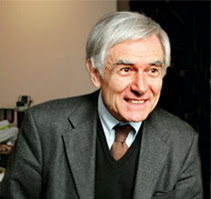 Credit for the Monpti goes to Budapest-born, German-based designer Stefan Lengyel (above), who created this typewriter in 1968 (a year before Ettore Sottsass's lookalike Olivetti Valentine went into production). The Monpti was made by Zbrojovka Brno NP in Vyškov, Czechoslovakia (makers of Consul typewriters), and marketed by German department store Karstadt in 1971, two years after the Valentine. 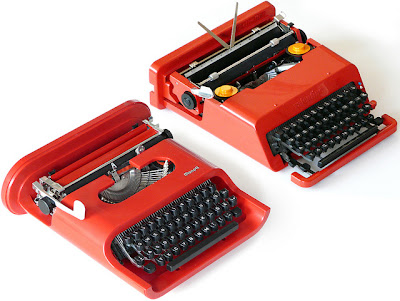 A very similar design to the Monpti was assigned by Richard Penney to Sperry Rand in 1969, the year after Lengyel's design. 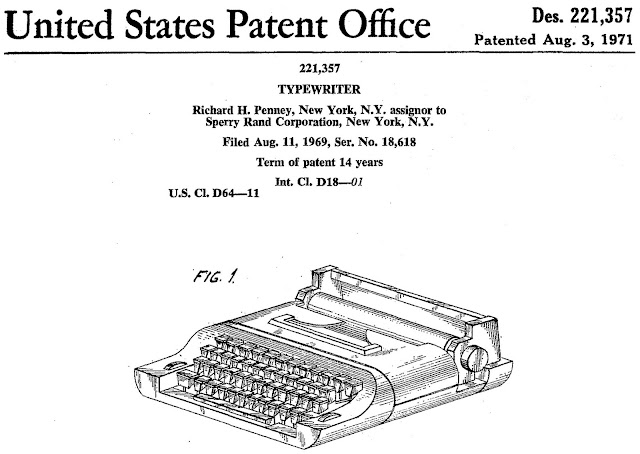 Born in 1937, Lengyel studied design at the College of Applied Arts in Budapest from 1956-61, and in 1964 became an assistant at the Hochschule für Gestaltung in Ulm, where he worked with Hans Gugelot. In 1965, Lengyel went to the Essen Folkwangschule, where he became head of the industrial design department in 1969. In between, he spent time as a guest professor in various countries, including the US, Finland, Italy, Spain, China and Japan. From 1981 to 2003, Lengyel held the chair of industrial design at the University of Essen. Since 2001, he has held the chair of industrial design at the University of Art and Design in Budapest.
Lengyel's clients included Berker, Dorma, Liesegang, Krohne, Rheinmetall, Ruhrgas, Mauser Office and Aral. For many years he was also a design consultant for Miele and Rosenthal. 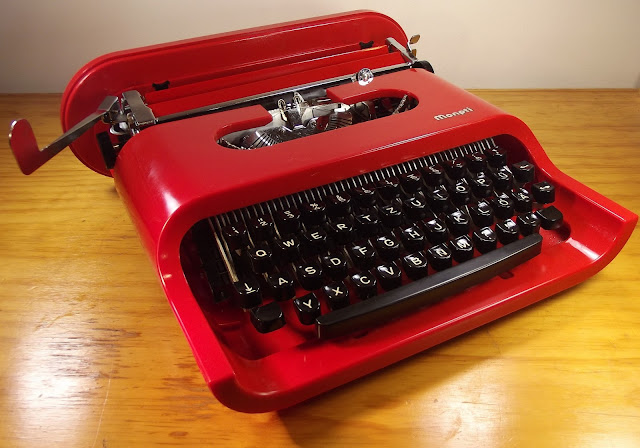 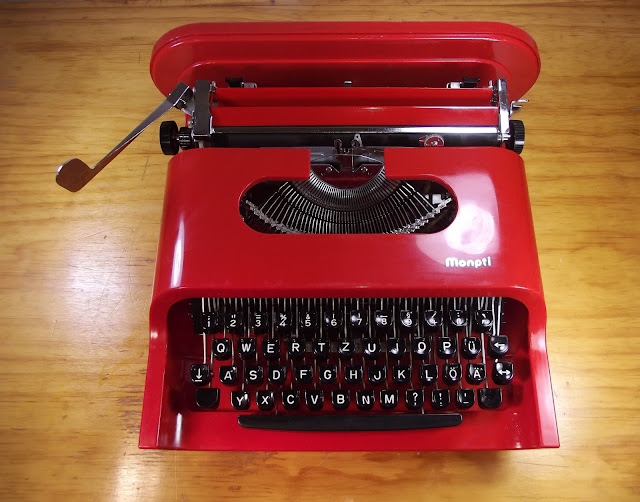 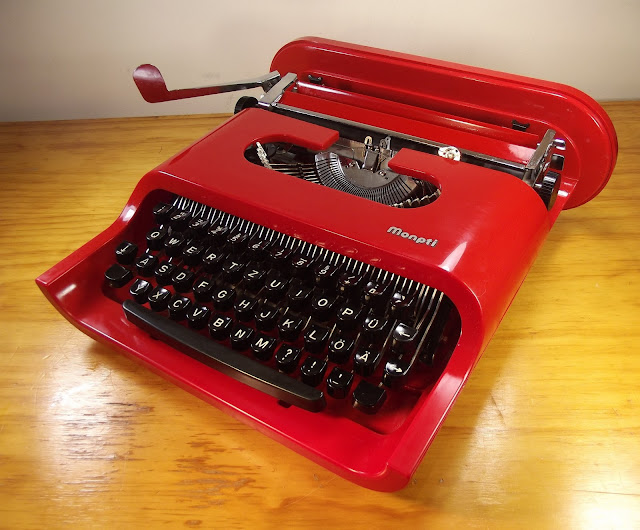 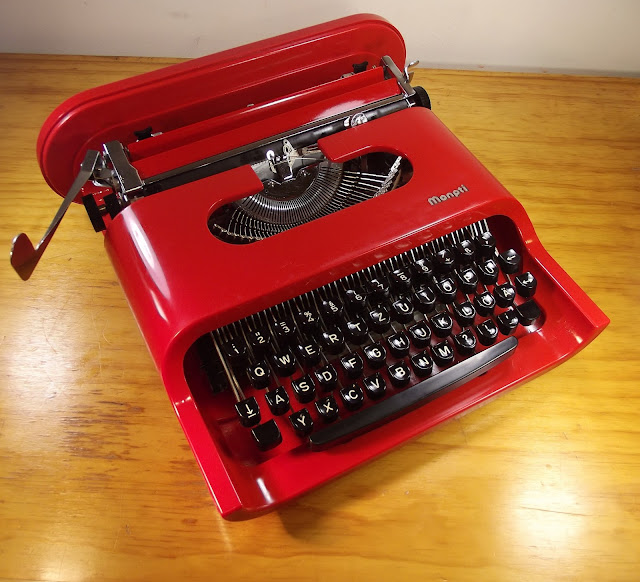 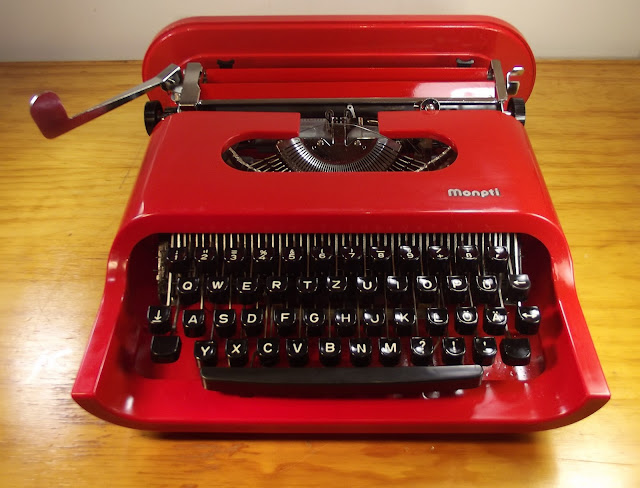 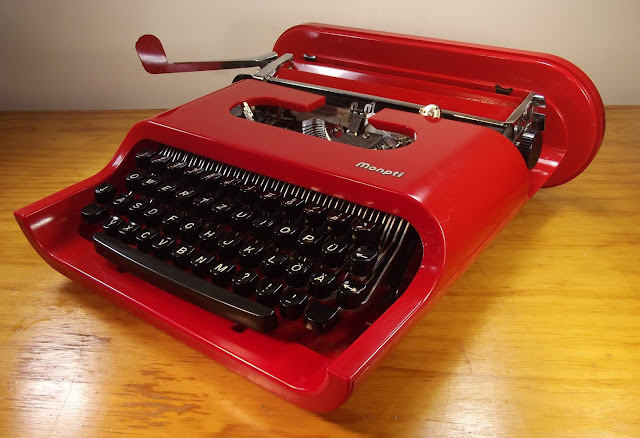 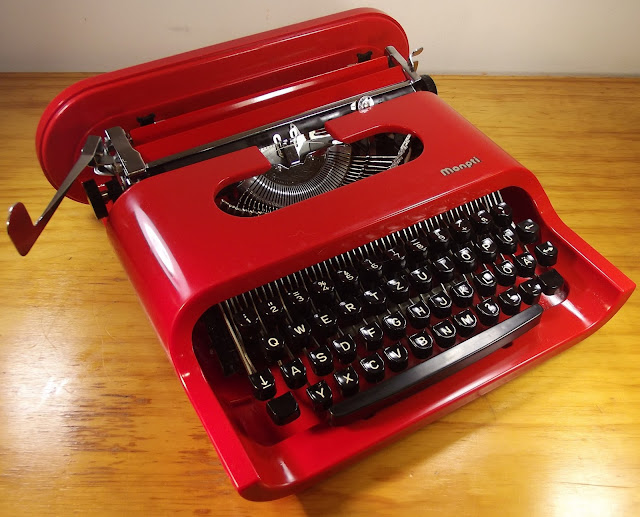 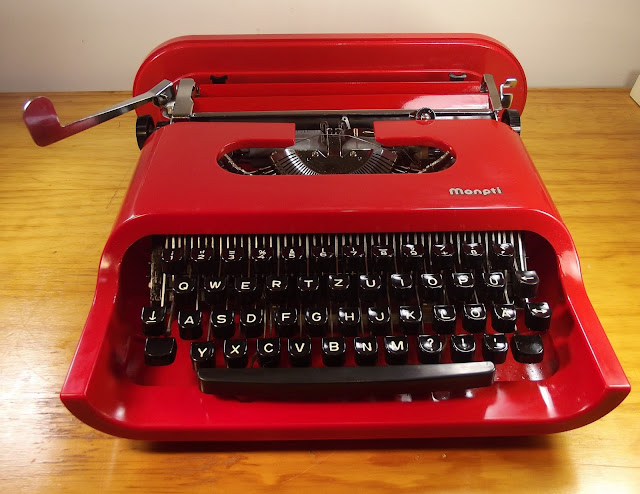 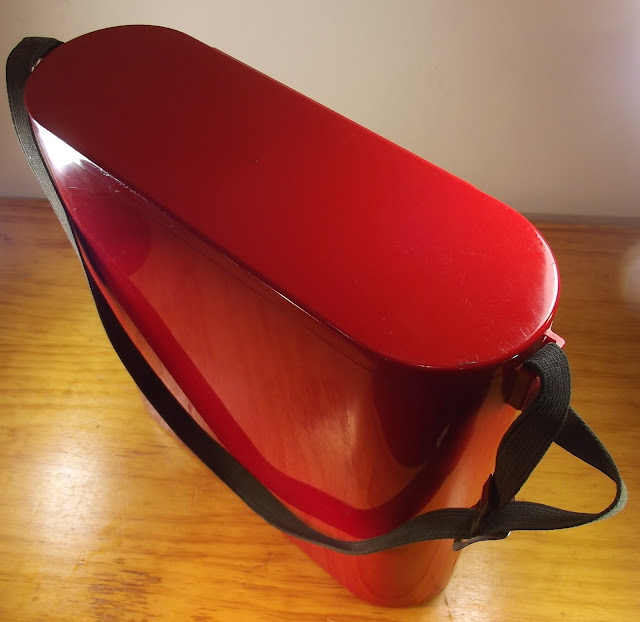 Posted by Robert Messenger at 18:15

I think this typewriter looks quite a bit nicer than the Valentine.

Funny that the instructions don't show the radical body, but just the more standard Consul form.

You make it sound like Christmas! The happiness is catching. I really like the way both the Valentine and the Montpi slot into their cases. In fact, I'd say it was the case which is the talking point even more than the machines - which are less revolutionary I suppose.

Congratulations on the acquisition of that rarity. At least it seems rare to me - a search of completed listings on eBay US can't find one, and my limited readings have never encountered it.

One has to speculate whether Sottsass might have been "informed" by it. I'll pass on choosing the looks of one over the other, but I think the Valentine's case design with the handle is an improvement, since you can slip the machine in with one hand, while it looks like you'd have to put your drink down for a moment and use two hands to tuck the Monpti away.

From the pictures, it looks like the red is much nicer than the Valentine. I agree with Richard, the Monpti has a nicer form.

That is one gorgeous typewriter! Love the carrying case, for some reason it reminds me of something one may see in an Army surplus store (not in RED, of course). Thanks for posting!

Very bad quality ; i just got one in France (I'm French), and it feels like a bad quality toy you have in your hands... The plastic is not so good, and really really not a good as the Valentine plastic...

Hard to explain in English for me, but everything, except the design, is "shity" on this machine... no comparasion to Valentine in the quality of materials...

I'm glad to have one though...

There's one of these on yahoo auctions in Japan. I'd pick it up but just dropped money on a Voss and the wife is still angry.