On June 23, 1912, the 44th anniversary of Christopher Latham Sholes' first type-writing machine patent being issued - a date now celebrated across the world as Typewriter Day - Ethel Sara Stoney Turing, daughter of the chief engineer of Madras Railways, gave birth to a son at Maida Vale in London, England. 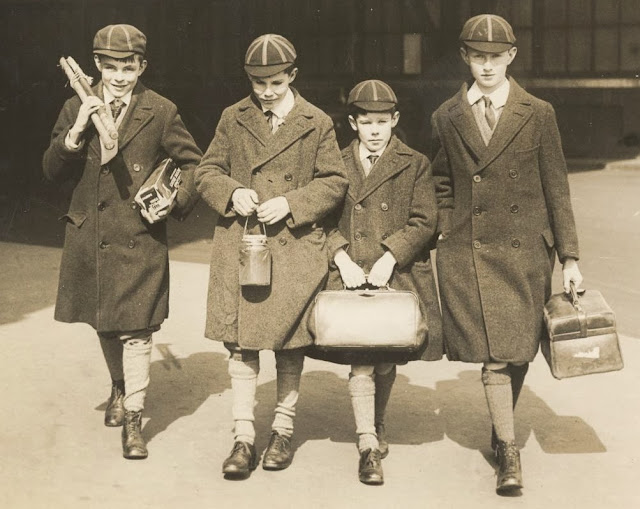 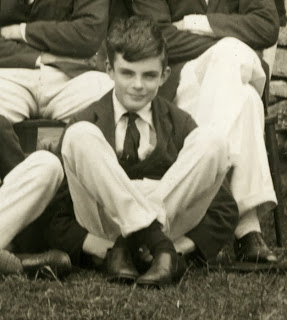 Alan Turing at Westcott House, Sherborne School, 1926, aged 14.
Eleven years later, in the summer of 1923, that boy, Alan Mathison Turing, wrote to his parents, then in Chhatrapur, Odisha, India (his father, Julius Mathison Turing, was with the Indian Civil Service) from his school at Hazelhurst, Sussex.
He told them that "this week I thought of how I might make a typewriter like this". 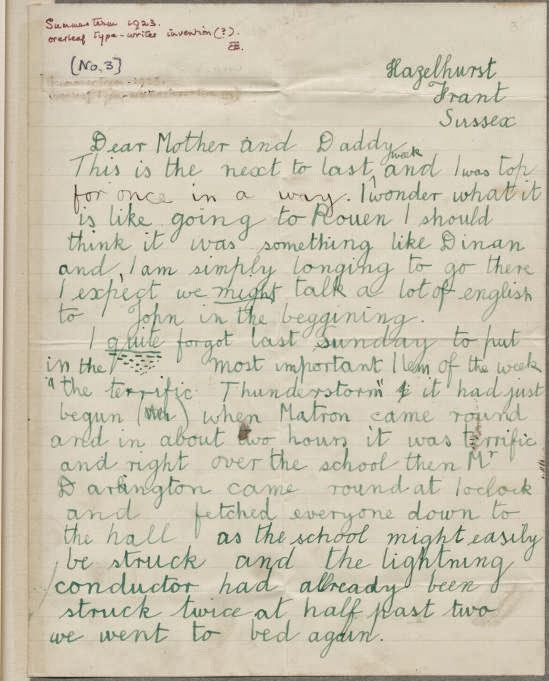 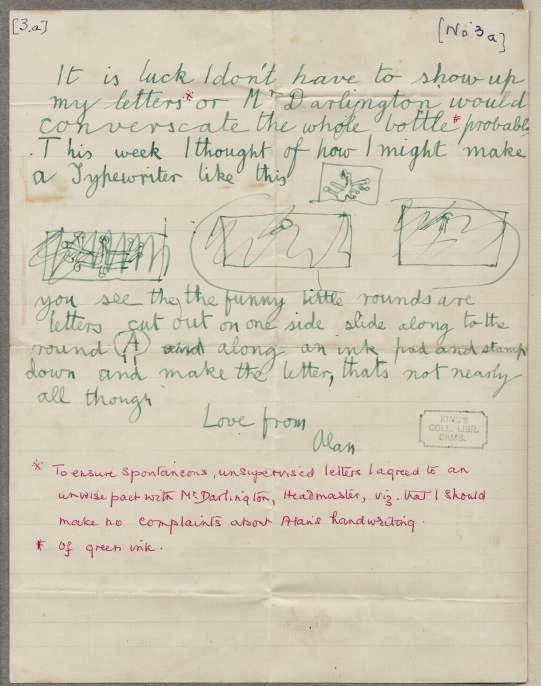 Alan Turing never did invent a typewriter. But he used the inspiration of a typewriter to become the Father of Computer Science. 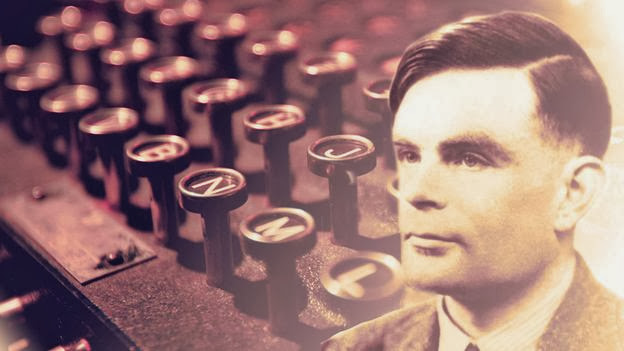 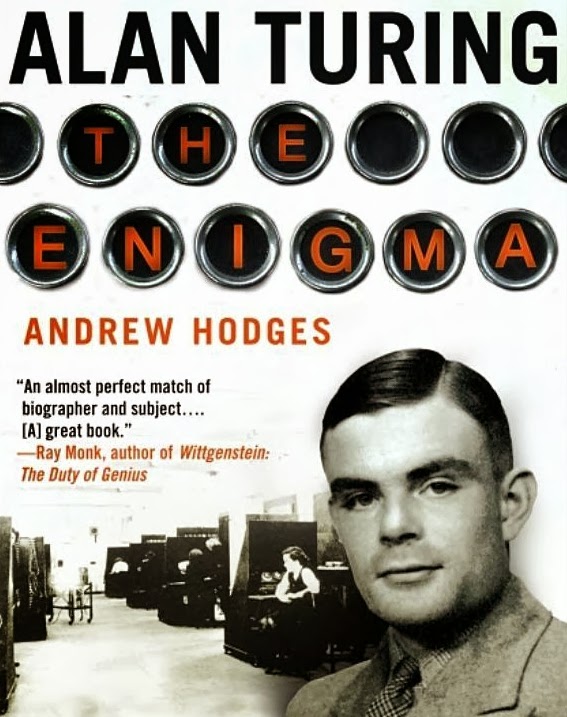 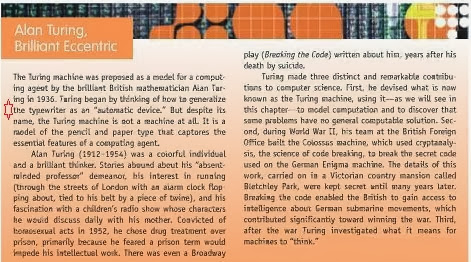 Last night I happened upon a very moving documentary about Turing on TV. It led me to look a little further into his life and to discover the connection in his work with the typewriter. This is a Welsh slate statue of Turing at Bletchley Park, sculptured by Stephen Kettle, having been commissioned by the late American billionaire Sidney Frank: 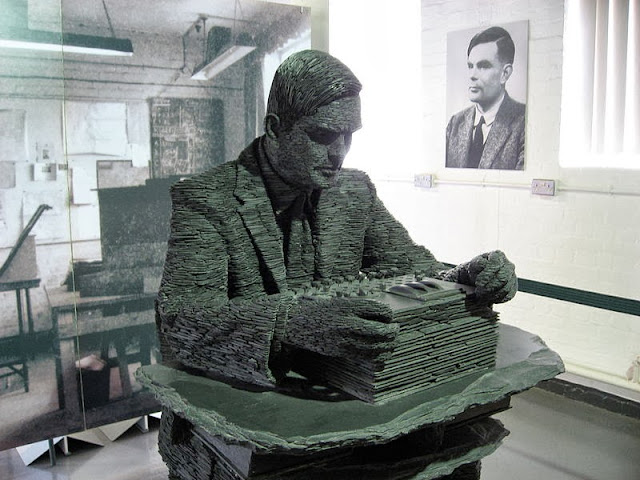 Below, from Hodges' Alan Turling: The Enigma: 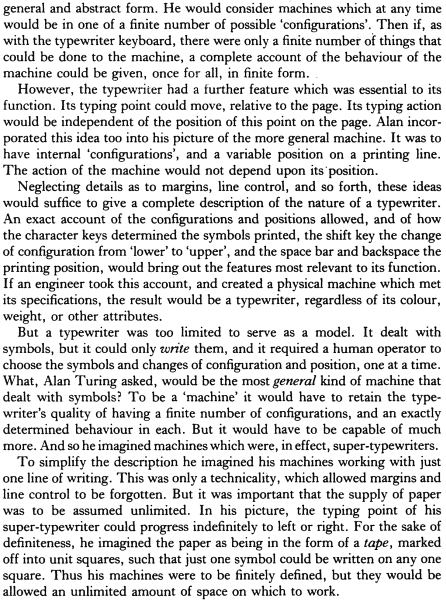 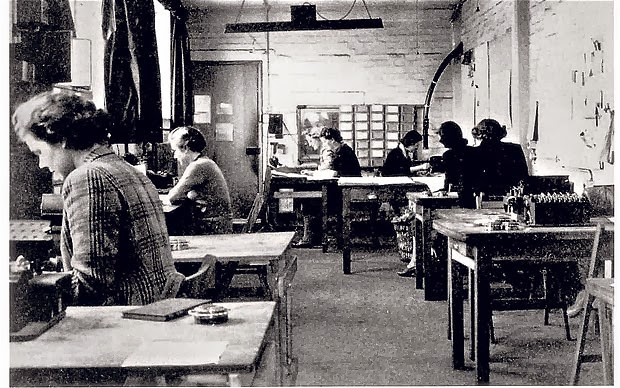 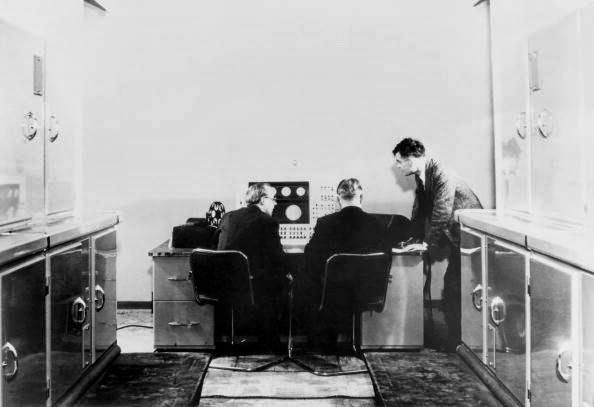 Turing, right, in 1951. Ferranti, a weapons and electronics company, was commissioned by the British Government to manufacture this computer. It was based on a prototype known as the Manchester Mark I, which was built at Manchester University in 1946 under the supervision of Professor Max Newman. Turing had previously been involved with the construction of the ACE (Automatic Computing Engine) at the National Physical Laboratory, and with the construction of 'Colossus', the world's first electronic programmable computer, built at Bletchley Park, Buckinghamshire, during World War II. Below, "Colossus": 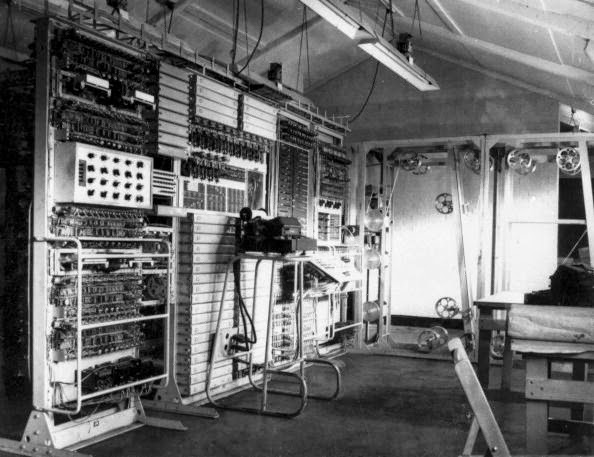 Bletchley Park was the British forces' intelligence centre during World War II. Cryptographers intercepted and deciphered top-secret military communiques between Hitler and his armed forces. The communiques were encrypted in the Lorenz code which the Germans considered unbreakable, but the codebreakers at Bletchley cracked the code with the help of Colossus. Below, the  'Enigma' deciphering machine used by the German Navy, displayed last year at the Heinz Nixdorf Museumsforum (HNF) in Paderborn, Germany. The HNF presented a special exhibition 'Eminent & Enigmatic - 10 Aspects of Alan Turing' on the 100th anniversary of Turing's birth. 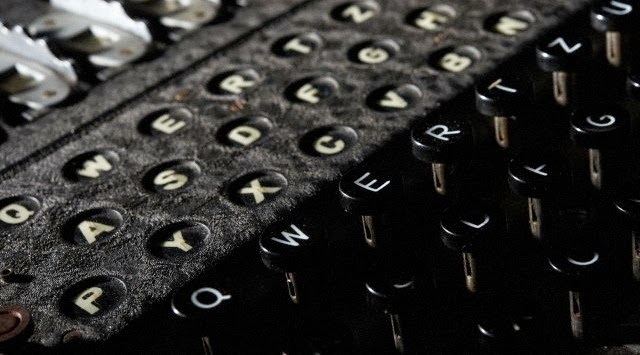 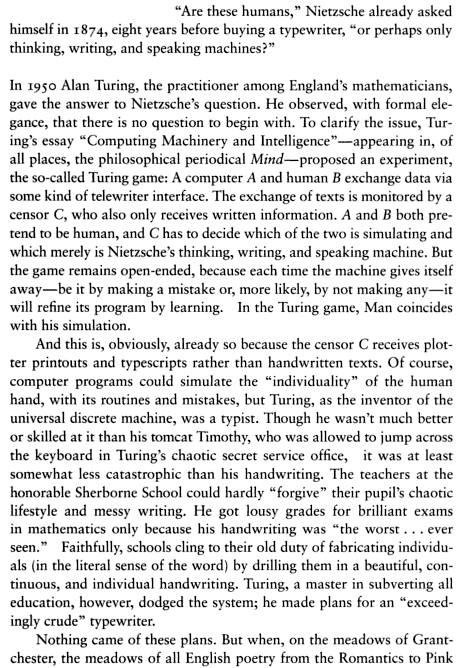 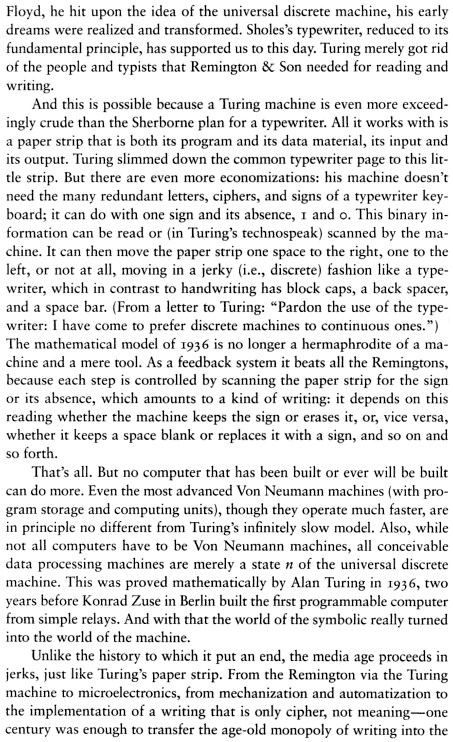 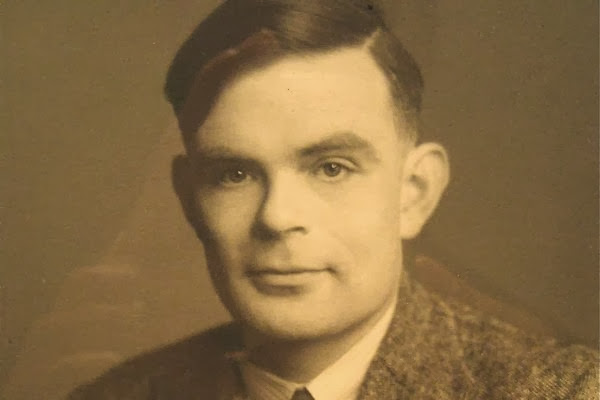 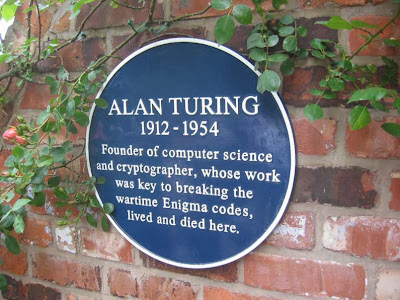 Hollymeade, Wilmslow, Cheshire.
Turing was a mathematician, logician, cryptanalyst and computer scientist. He was highly influential in the development of computer science, giving a formalisation of the concepts of "algorithm" and "computation" with the Turing machine, which can be considered a model of a general purpose computer.
Turing is widely considered to be the father of computer science and artificial intelligence. 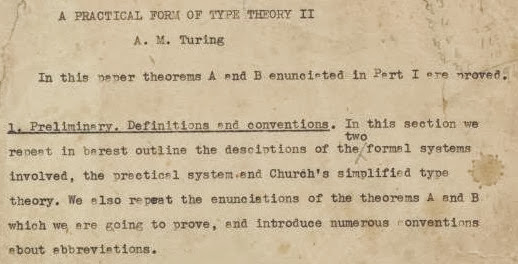 A sample of Turing's typing
During World War II, Turing worked for the Government Code and Cypher School at Bletchley Park, Britain's codebreaking centre. For a time he was head of Hut 8, the section responsible for German naval cryptanalysis. He devised a number of techniques for breaking German ciphers, including the method of the bombe, an electromechanical machine that could find settings for the Enigma machine.
After the war, Turing worked at the National Physical Laboratory, where he designed the ACE, one of the first designs for a stored-program computer. In 1948 Turing joined Max Newman's Computing Laboratory at Manchester University, where he assisted in the development of the Manchester computers and became interested in mathematical biology. He wrote a paper on the chemical basis of morphogenesis, and predicted oscillating chemical reactions such as the Belousov-Zhabotinsky reaction, which were first observed in the 1960s.
Turing's homosexuality resulted in a criminal prosecution in 1952. He accepted treatment with female hormones (chemical castration, or "organo-therapy", through stilboestrol, a synthetic oestrogen, causing gynaecomastia) as an alternative to prison. Turing died in 1954, just over two weeks before his 42nd birthday, from cyanide poisoning. An inquest determined that his death was suicide.
In September 2009, following an Internet campaign, then British Prime Minister Gordon Brown made an official public apology on behalf of the British Government for "the appalling way he was treated". In May last year, a private member's bill was put before the House of Lords to grant Turing a statutory pardon. In July this year it gained Government support.
In 1999, Time Magazine named Turing as one of the 100 Most Important People of the 20th century. It said, "The fact remains that everyone who taps at a keyboard, opening a spreadsheet or a word-processing program, is working on an incarnation of a Turing machine." In 2002, Turing was ranked 21st on the BBC nationwide poll of the 100 Greatest Britons.

Posted by Robert Messenger at 13:25

An inspiring man. I once saw and touched an Enigma machine. Very impressive mechanism.

Also, Hut 1 of Bletchley Park with the Diplomatic Wireless Service (DWS) exhibition has closed. Sad thing because during the war Hut 1 was the radioshack and it now has no radio's anymore.

As always a great article!

I have to say I had a good chuckle reading Turing's mom's note at the end of his handwritten letter: "to ensure spontaneous, unsupervised letters I agreed to an UNWISE pact with Mr. Darlington, headmaster, viz. that I should MAKE NO COMPLAINTS ABOUT ALAN'S HANDWRITING".

What the heck was he thinking of in that little sketch of a typewriter at age 11?

I think society is open enough now that Turing would not have been persecuted for his homosexuality as he was in the 1950's. The Wikipedia article does a nice job of presenting the "enigma" of his supposed suicide. Thanks again, Robert for an interesting post. They always inspire me to read a bit more about the subject.

Thank you Spider, Miguel, Richard and Tony for your very encouraging comments.
Miguel, I think the handwriting problem relate to the typewriter idea. He also, a little earlier, "invented" a pen.
Richard, I thought a Blick - he does mention an ink pad, and it looks Blickish to me.
Tony, you will have noted the difficulty getting a pardon or overturning the original offence, and the reasoning put forward.