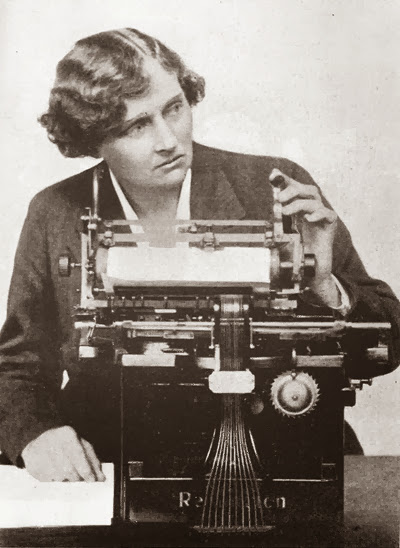 This photo, of Ettie Rout with her Remington typewriter, appeared in her 1926 book, Māori Symbolism.

When Ettie Annie Rout suicided in the Cook Islands, 77 years ago this month, the British Press Association wrote an obituary saying she was "one of the best known of New Zealand women". The PA story implied Rout's claim to fame was her typewriting speed. Yes, she was a highly skilled typist and had once supported herself and her family through her typewriting prowess. For fear of incurring a hefty fine, however, PA could not write what Ettie had really achieved. She was one of the world's great pioneering safe-sex campaigners. She had saved the lives of hundreds, if not thousands, of Australian and New Zealand troops serving in Egypt and the Western Front in World War I.  Yet, in the British House of Lords, a bishop had called her "the wickedest woman in Britain". H.G.Wells was to describe her in his 1941 novel You Can't Be Too Careful as "that unforgettable heroine". And a French venereal disease expert had dubbed her a "guardian angel" of the ANZACs (Australian and New Zealand Army Corps) on the Western Front. For all that, she was forgotten in her own country until the late 20th century, when the AIDS epidemic required the same ideological battle to be fought all over again. The Christchurch AIDS Clinic is named after her.
Rout killed herself, far from her few remaining friends and her many foe, by taking an overdose of quinine while on board a ship headed from New Zealand to the Cook Islands, and dying at Avarua House, Avarua, on the island of Rarotonga, on September 17, 1936. She was buried in the churchyard of the Cook Islands Christian Church in Avarua, aged 59. She had returned to New Zealand after the failure of her marriage in London, but rebuffed as a "persona non grata" by her fickle former friends, had set off for the Cook Islands, cabling back in advance of her suicide that "Ettie Rout died at sea".
In 1922, Sir William Arbuthnot Lane, Consulting Surgeon to Guy’s Hospital, London, wrote, "To no woman has it been permitted to do the same amount of good, and to save more misery and suffering, both during and after the war, than to Miss Ettie Rout ... Not only has Miss Ettie Rout the qualities that characterise all great humanitarians, but she also possesses, in a unique degree, an intimate knowledge of the terrible troubles that arise from intercourse, and of the manner in which they can be reduced and perhaps eliminated." 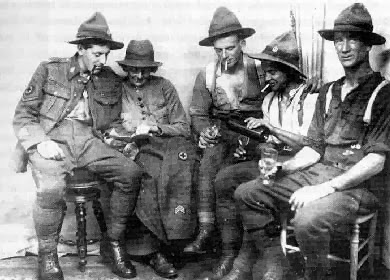 Ettie with New Zealand soldiers in Paris, 1918.
In an address to a Medical History of War Conference at the Australian War Memorial in Canberra in 2009, a New Zealand military medical expert, Dr David Bradford, said it was "almost entirely due to [Ettie's] influence that both the Australian and New Zealand armies dropped their punitive approach to soldiers with STIs [sexually transmitted infections] by the time of the Vietnam War and that we as Army regimental medical officers there were not only advocating condom use but mandating the supply of same before soldiers went on leave ... So her influence lives on and her stance has been vindicated many, many times over since the coming of HIV/AIDS in the 80s. I believe she should be regarded as a national icon in both Australia and New Zealand and there ought to be a well-beaten track to her grave - who knows how many countless men and women have been saved the ravages of STIs and more latterly HIV/AIDS by her wonderful example and courageous fighting spirit?" 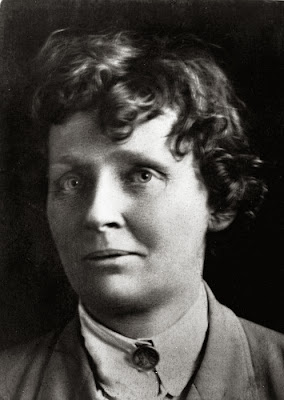 Ettie was born in Launceston, Tasmania, on February 24, 1877. At the end of 1884 the family arrived in Wellington, New Zealand. Ettie attended the Terrace School, Wellington, where she topped the Wellington Education Board's examination for Wellington and the Wairarapa in 1891 and won a scholarship to Wellington Girl's High School. But she gave up the scholarship, as her family left for the rural town of Woodville after her father's plumbing business had failed.
The family finally settled in Christchurch in 1896, and Ettie became one of the first pupils at Charles Gilby's College, where she studied Pitman's shorthand writing and typing. In 1902 she became one of the first government-appointed shorthand writers working in the Supreme Court and on commissions of inquiry. This work gave her a rare insight, particularly for a woman, into social issues.
Ettie supported her family on her earnings, teaching shorthand as well and in 1904 opening a business, initially with Horace Gilby, in Chancery Lane, as a public typist. She gained a public profile as a businesswoman and as a journalist, writing pieces for the Lyttelton Times newspaper, and as a physical culturist.

Ettie became involved in the labour movement in 1907. Three years later she set up a newspaper, the Māoriland Worker, with the shearers' union, of which she was an honorary member. But she had already offended her contemporaries by being a woman "peculiar enough to be as God Almighty intended them to be – the equals of men, physically and mentally". 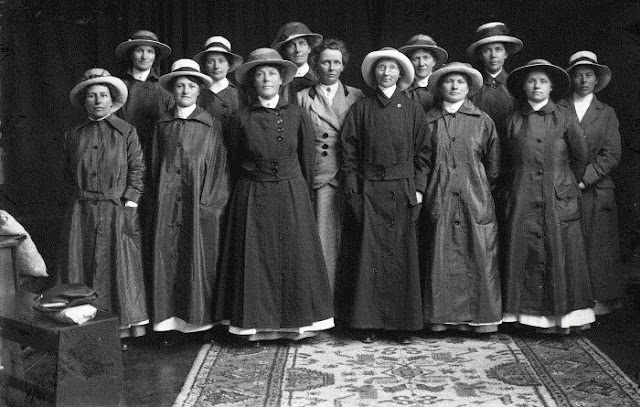 Ettie Rout in October 1915. Ettie (in the middle without a hat) and the first group of her New Zealand Volunteer Sisterhood to go overseas. Their uniforms were long blue-print dresses with white aprons and panama hats.
In July 1915, three months after the start of the Gallipoli campaign in Turkey, Ettie set up the New Zealand Volunteer Sisterhood. She invited women aged 30 to 50 to go to Egypt to look after soldiers. First, the volunteers spent a month training and helping with a cerbro-spinal meningitis epidemic. Despite government opposition, in October Ettie sent the first batch of 12 volunteers to Cairo, where they worked in the New Zealand YMCA canteen in the Esbekia (Azbakiya) gardens and in hospitals. When Ettie arrived there in February 1916 she immediately became aware of the major problem of the high venereal disease rate. The Australian Dermatological Hospital in Egypt was treating both Australian and New Zealand soldiers, and at one stage was receiving 250 new VD patients a day. Official estimates put the number of New Zealand troops who had contracted VD at 20 per cent, one in five. The real rate was possibly as much as double that: higher than the percentage of those who actually died in the war. Many soldiers were hospitalised with VD without ever having engaged in battle. Ettie wanted to see VD treated as a medical problem, not a moral one, and all available preventive measures used - including the issue of prophylactic kits and the establishment of inspected brothels. This was an extraordinary position for a woman to take up at a time,  when social purity was a major plank of the feminist movement. She lobbied the New Zealand Army Medical Corps with no success. In April 1916, when most of the New Zealand expeditionary force left for France, Rout remained in Egypt with the men fighting the Sinai-Palestine campaign. Believing the army was not looking after these soldiers well enough, she opened the Tel El Kebir Soldiers' Club and later a canteen at El Qantara, to provide better rest and recreation facilities and better food. For this work she was mentioned in dispatches and in Charles Beans' Australian official war history. 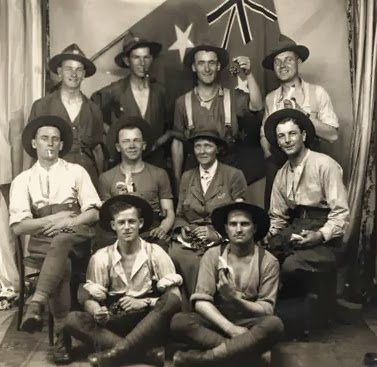 Ettie poses with a group of New Zealand soldiers in Paris in August 1918.
Realising the VD problem had not been solved, Rout went to London in May 1917 to push the New Zealand expeditionary force into action. After gathering the findings of leading doctors in this area, she devised a prophylactic kit containing calomel ointment (containing mercury), condoms and potassium permanganate (Condy's) crystals (for irrigation). She sold the kits to soldiers at the New Zealand Medical Club, which she set up at Hornchurch, Essex, near the New Zealand convalescent hospital. Rout was instrumental in the change of official policy, with her kit adopted for free and compulsory distribution to New Zealand soldiers going on leave at the end of 1917.

Grey River Argus, Greymouth, March 1918
The New Zealand Times published Ettie's letter in which she suggested free kits and inspected brothels. This caused an outcry. A deputation of women asked the prime minister to put an end to Ettie's medical club. But the letter made the defence minister, James Allen, rethink and he told the New Zealand general in charge of troops in England to do whatever he thought necessary to reduce the venereal disease rate. Ettie received no credit.
Under war regulations, New Zealand newspapers were banned from mentioning Ettie's name or her activities, with a £100 fine for breaking the law. In April 1918 Ettie arrived in Paris, where she set up what was effectively a social and sexual welfare service for soldiers. She stayed at the New Hotel opposite the Gare du Nord and as troop trains arrived from the front, she stood on the station's platform, called out for New Zealand soldiers, gave them her trademark kiss on the cheek, asked whether they had their prophylactic kits and handed out cards recommending the brothel of Madame Yvonne, who had agreed to run her brothel on "safe sex" lines and have Ettie inspect it regularly. Brothels were legal in France, but registered prostitutes, filles publique, were vastly outnumbered by up to 70,000 casual streetwalkers, the filles de joie. For her work in Paris and Villers-Bretonneux, a ruined Somme town, where she ran a Red Cross depot in 1919–20, the more enlightened French awarded Ettie the Médaille de la Reconnaissance Française, and the British War Office sent her a tribute from King George V for her contributions to the health and safety of the troops. French VD specialist, Dr Jean Tissot, dubbed Ettie "the guardian angel of the ANZACs". But Ettie wrote to H.G.Wells, "I stand with one foot on a hot brick and the other on the thin ice, so progress is rather slow." The New Zealand Returned Soldiers' Association sent a post-war tribute of £100, but kept the donation a secret.

Grey River Argus, October 1919
After the war Ettie wrote a number of books, including Safe Marriage: A Return to Sanity (1922), a safe-sex manual telling women how to avoid both venereal disease and pregnancy, which was a best-seller in Britain and Australia but was banned in New Zealand. It encouraged women to own their own bodies and take responsibility for their own sexual health. Ettie also wrote Māori Symbolism (1926), which purported to be a report from a Māori elder but reflected her own eugenic ideals. She also published vegetarian and wholemeal cookbooks and exercise manuals for women. She organised the defence in a major birth control court case in 1923, when a couple were tried for selling a copy of Margaret Sanger's Family Limitation pamphlet without checking that the purchaser was over 21 (shades of The Little Red School Book saga in Australia 50 years later!). 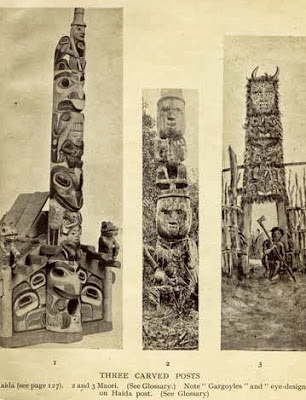 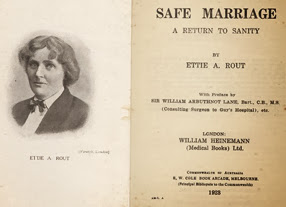 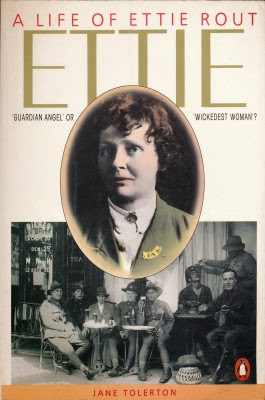 The life of this remarkable woman has been captured by Jane Tolerton in her biography Ettie: A Life of Ettie Rout – ‘Guardian Angel’ or ‘Wickedest Woman’?

Posted by Robert Messenger at 12:12

Very interesting -- she sounds quite brave and, of course, I never heard of her.

Ms. Ettie Rout should be renowned as a legendary lifesaver - thanks for the detailed bio of this great woman.