One Million Words of Pulp Fiction a Year for 15 Years! Walter Brown Gibson, his Corona Typewriter and The Shadow 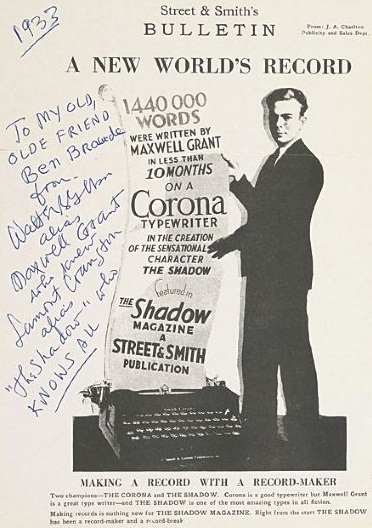 I am deeply grateful to Richard Polt
for tracking down this image for me. 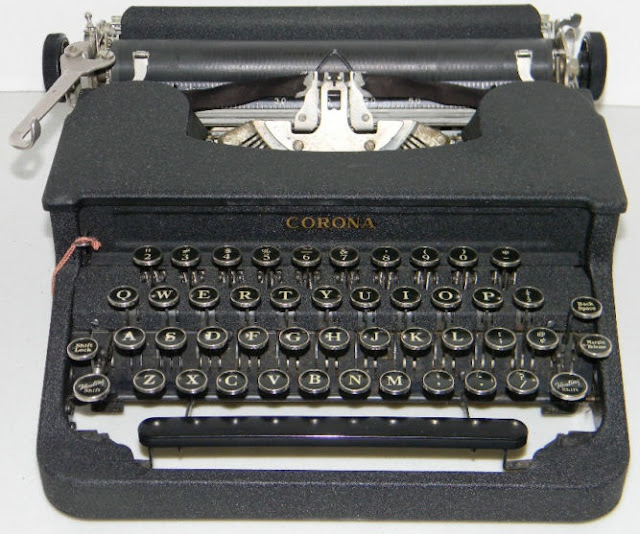 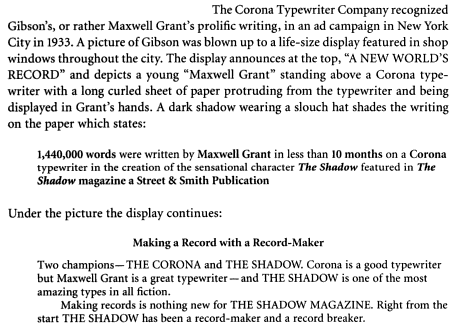 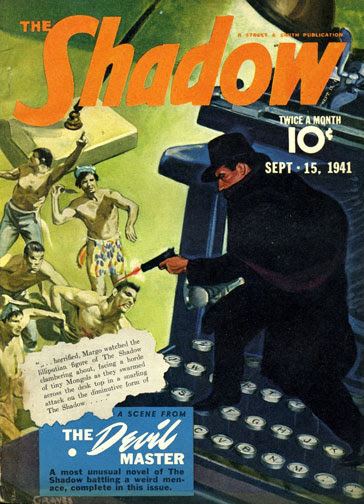 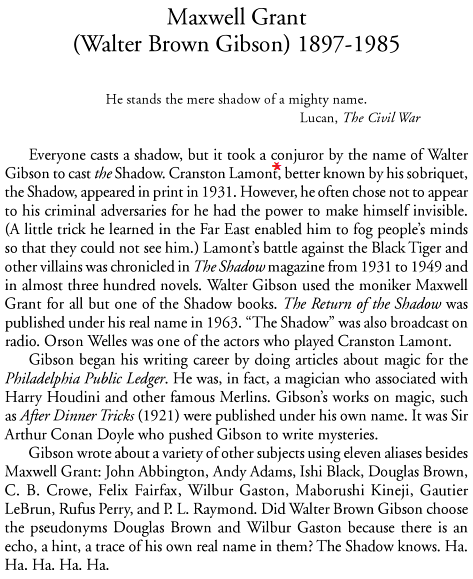 *I think this should be "Lamont Cranston"

Walter Brown Gibson was born in Germantown, Philadelphia, on September 12, 1897. He was best known for his work on the pulp fiction character The Shadow. Gibson, under the pen-name Maxwell Grant, wrote more than 300 novel-length Shadow stories, writing up to 10,000 words a day to satisfy public demand during the character's golden age in the 1930s and 1940s. He also authored five of the 12 novels in the Biff Brewster juvenile series of the 1960s (under the pen name Andy Adams). He was married to Litzka R. Gibson, also a writer, and the couple lived in New York state. With Litzka, Gibson co-wrote The Complete Illustrated Book of the Psychic Sciences (1966), a 404-page book which explains how to practise many popular forms of divination and fortune-telling, including astrology, tasseography, graphology and numerology.
Gibson graduated from Colgate University in 1920 and began working for newspapers in Philadelphia as a reporter and crossword-puzzle writer, specifically for the Philadelphia North American and later The Evening Ledger. In 1928 Gibson was asked by Macfadden Publications to edit True Strange Stories. In 1931, after submitting some crime stories for Detective Story Magazine, he was asked by publishers Street & Smith to produce the first print adventure of The Shadow, who at that stage was merely a voice, the mysterious narrator of the Street & Smith-sponsored Detective Stories radio drama. It was Gibson who created all the mythos and characterisation of The Shadow, including his alter ego of wealthy playboy Lamont Cranston. The popularity of the radio show's narrator inspired Street & Smith to translate the character into print, and Gibson was duly asked to produce 75,000 words for the first quarterly issue of The Shadow pulp magazine. This first Shadow story was published on April 1, 1931, just nine months after the character's appearance on the airwaves. Six months later, The Shadow was headlining a new radio show, and his pulp adventures, launched as a quarterly publication, within months was on a twice-monthly schedule, with Gibson producing the equivalent of 24 novels a year. Described as a "compulsive writer," Gibson is estimated to have written, at his peak output, 1,680,000 words a year and at least 282 of the 325 Shadow novels. As the Shadow character spun off into a daily syndicated comic strip, monthly comic books, movies and parlour games, Gibson went with him, scripting many of those comic book stories and the syndicated newspaper daily, as well as serving as consultant on the very popular Sunday night radio show.Gibson also wrote more than 100 on magic, psychic phenomena, true crime, mysteries, rope knots, yoga, hypnotism and games. He served as a ghost writer for books on magic and spiritualism by Harry Houdini. Gibson wrote the comic books and radio drama Blackstone, the Magic Detective. Gibson also introduced the famous "Chinese linking rings" trick in America, and invented the "Nickels to Dimes" trick that is still sold in magic stores to this day.
Gibson died in Kingston, New York, on December 6, 1985. 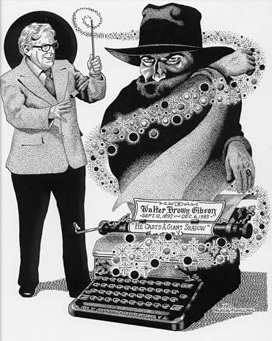 The artist appears to have mistaken a Royal for a Corona. 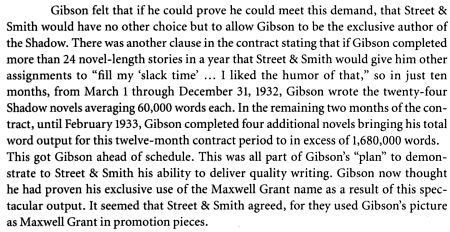 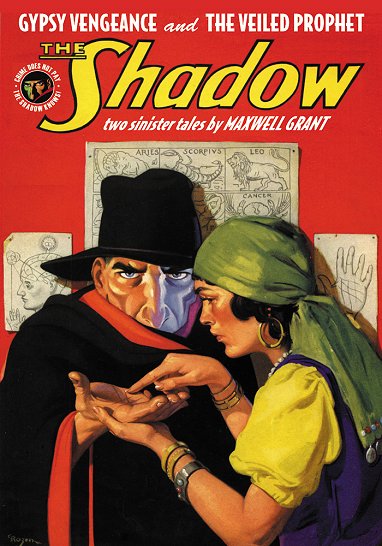 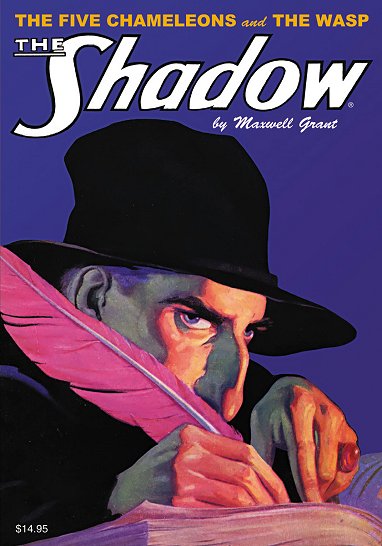 "This pink quill will never do ... must get a Corona typewriter!" 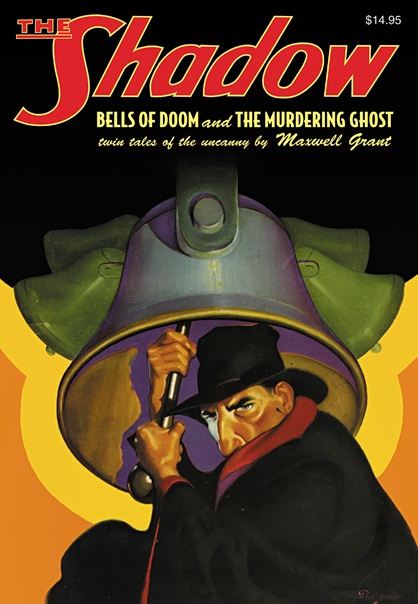 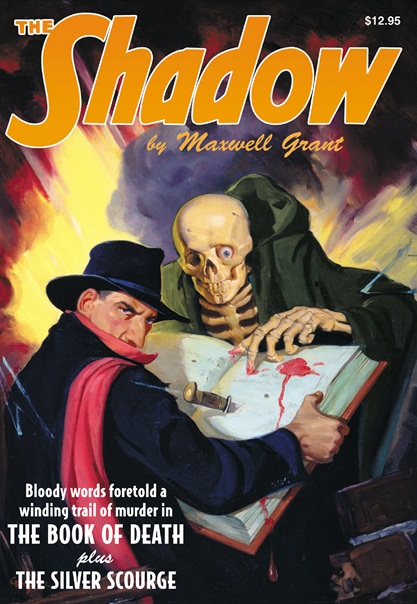 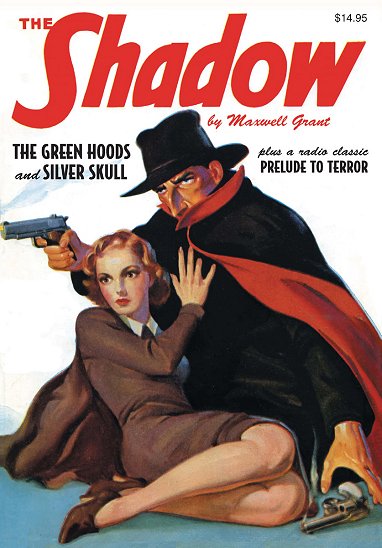 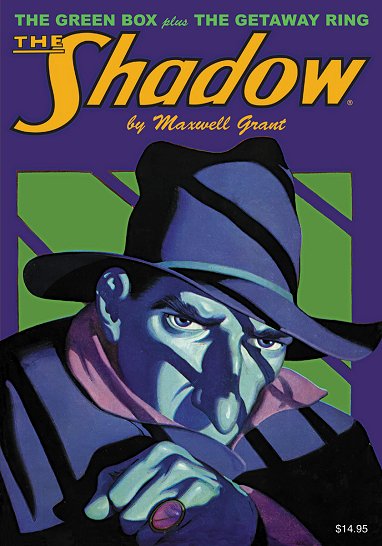 Ah, wonderful images! Ya gotta love the Shadow's schnozz. I'd like to read that story where the Shadow has been reduced to tiny size and is clambering on a typewriter.

A few years ago I read a novel called The Chinatown Death Cloud Peril, by Paul Malmont, that features Walter Gibson and Lester Dent as heroes. There are plenty of passages with typewriters, including one where a "striker" (typebar) on one of Dent's typewriters flies off and whizzes across the room, and another where Gibson types until his fingertips are bleeding. What was Malmont smoking?

Jesus Christus! How can I sleep now?