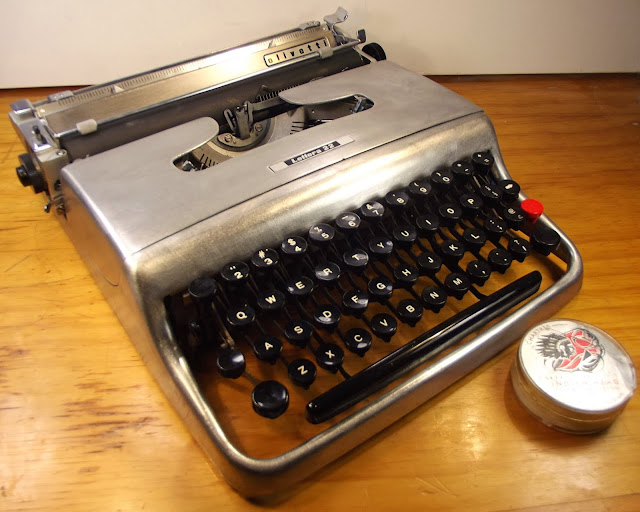 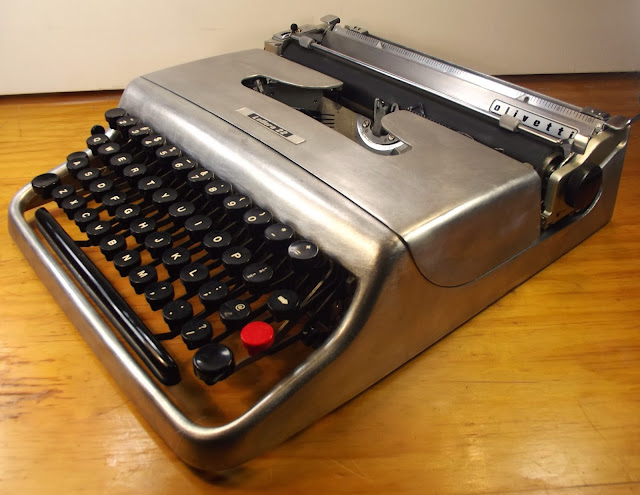 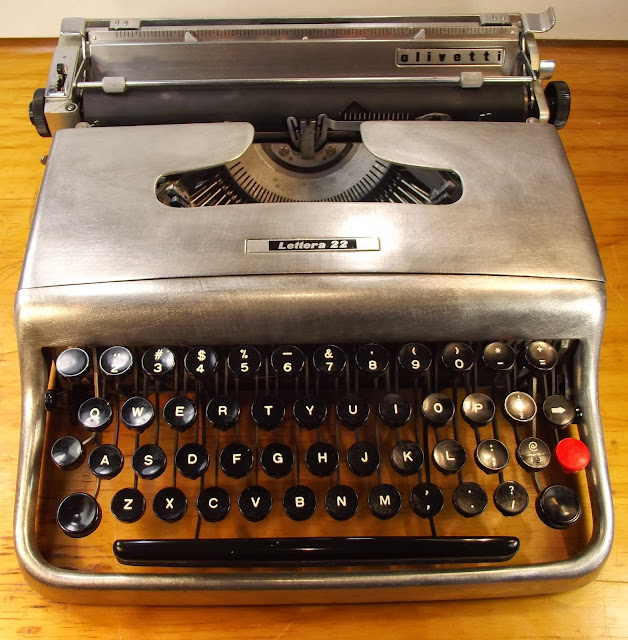 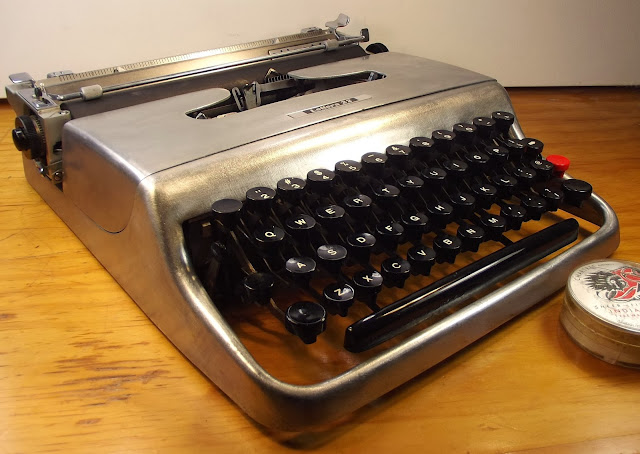 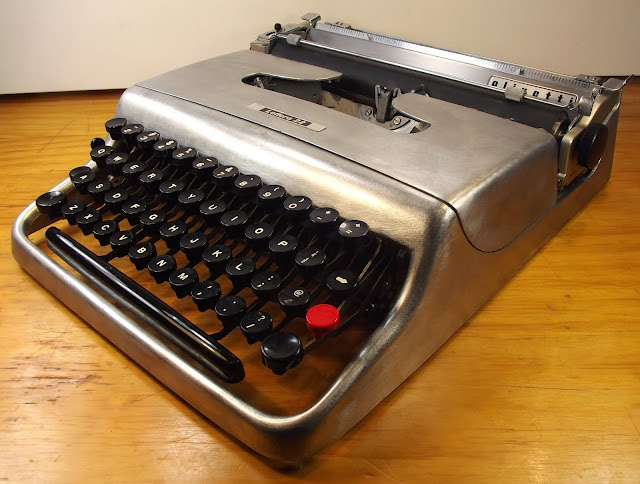 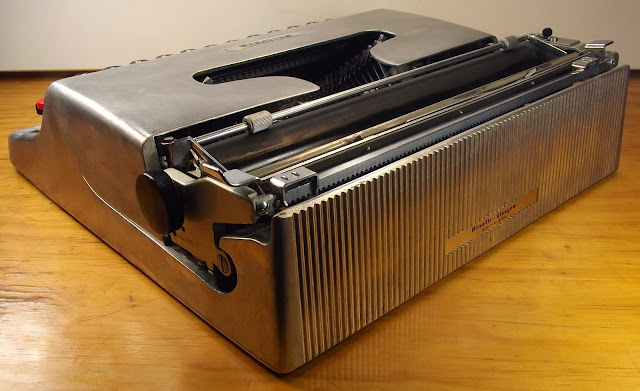 While working on another project, and waiting for things to dry in this scorching Canberra summer, I decided to finally tackle a paint-faded Olivetti Lettera 22 mask which had been sitting out the back for months - it was only adding to the clutter.
This turned out to be a bigger project than expected. Reinforcing that Olivetti, when servicing these machines, offered re-paints of the casing and ribbon spools cover (but not the paper plate), this machine had at least two coats – fawn on top and blue-grey underneath.  So it took lots of paint-stripper and even more elbow grease to get all the paint off.


The original plan was to repaint it in red and green stripes for Christmas, but it looked so good stripped to the metal that I grabbed the guts of a Lettera 22 from off the spare parts heap and assembled the machine. Only then did I realise why the mechanics had been chucked on the spare parts heap in the first place – it has no carriage lever! Ah well, even without the lever, it works greats and looks sort of sexy in the nude – I might just leave as it as it is. We’ll see …

PS: Before anyone springs to my aid, I do have a spare carriage lever I can fit to this machine - I just didn't around to doing it.
Posted by Robert Messenger at 19:26

Perfect candidate. I also noticed that where my Graphika is rubbed, there's that beige brown paint layer under the green. I think they just resprayed finished Lexikon shells to differentiate it.

Nice work. I've been wanting to take one of my aluminum body machines and strip the paint and buff out the metal. All I need is time.

But do you happen to have a spare carriage return lever for a studio 44 by any chance?

Beautiful job though, Robert. I really like how it has come out.

Interesting discovery about the Olivetti repainting.

Heh, Ryan Adney at Magic Margin has an L22 that he paint-stripped back when Richard Polt started the "Silver Surfer" craze:
http://www.magicmargin.net/2011/06/we-need-more-cowbell.html

I just recently gave up on a Lettera 22's broken carriage return lever. It's held into the mechanism by a tiny setpin that is really hard to get to, and is really tightly in there. I do not envy you the job of getting the old busted swing post out. Good luck!

Oh man. Nude and armless... and somehow I get to be the first one to suggest calling her the Venus de Milo! I was sure someone would have me beat.

Did you manage to get the paper plate off? I have a 32 that I am looking to repaint, but can't find how to get it off!

James, yes the paper paper came off. It may help to get the right side platen knob off, and you need a very small Allen key to do that. Once the knob is off, you can easily remove the platen, which enables you to more easily slip the paper plate out. It will also help to remove the bar holding the margin setters, which requires gripping the nuts while you unscrew the screws at either end. Essentially, the only real problem is a small spring behind the paper plate, which needs to be gently unhooked and then hooked again when replacing the paper plate. The operation varies from Lettera 22 to 32, with variations within the 22 model - it's much easier with the earlier 22s than the 32s. Oddly enough, when Olivetti itself repainted 22s, as an offered part of servicing, it didn't remove and repaint the paper plate.

James, I should also have mentioned that the whole operation is made much easier if you have removed the entire outer casing. Unscrew it and slip it off at an angle, left to right, clearing the carriage lock switch.

Thanks for the advice. Mine was quite different, but with your pointers and a bit of intuition I was able to get it. There were two small screws underneath the rollers that needed to be loosened and two clips on the back that needed to be pried off. Thanks again.

Hi Robert! Quick question. Did you remove the "Lettera 22" and "Olivetti" insert logos when removing the paint off the typewriter housing? If so how did you manage to take those off? I'm assuming they are glued on.

Yes, the badges were removed. Yes, they are glued on. In each case you will find two holes behind them. You gently push a prod (i.e. small screwdriver) through those holes and ease the badges off.

22Two questions, as I'm trying to strip and paint my L22:

1. I'm having trouble removing the platen. You mentioned an allen key but on the right platen knob of my machine, there are two nuts that seem to be holding on the knob and won't budge. Is that a different design, or am I missing an allen wrench hole?

2. There is some padding on the underside of the body plates which I assume is for sound dampening. Did you remove that or work around it? I'd love to find a material to replace it with.

Hi Robert. I just found a Olivetti Lettera 22 in a second hand shop and it too has no lever/ arm. Are they impossible to come by? When I googled it, your post popped up! Some of the comments suggest that it is nigh on impossible to attach one even if I do manage to find one. Suggestions? I love the sound of this machine and would dearly love to make it sing again!
Thanks, MBA.

MBA - practically impossible, I would say. Generally the rod upon which the lever pivots has snapped where the lever rests, so there's little or nothing to work with.

Any recommendations on a replacement case for a Lettera 22? Mine is thoroughly trashed. Stripped, rusted handles, broken zipper, water stains. Not great.

I’d love to fix it...
many thanks, contrasts39@gmail.com

Hi,
Thanks for this old discussion.
I have a snapped off lever as well And I still have the lever.
I’d love to fit it back on.
Does anyone here have any tips?
Thanks in advance, Dan

Well this appears to be a trend, I found an Lettera 22, but with a snapped lever. Not sure whether to jump on it, but I guess there is no fix for it?

Hi Atyper -
It’s still on my list of projects to do. I bought a beat up Lettera 32 for $20 simply to harvest the intact lever.
In the meantime, the 22 is one of my favourite typers. Returning the carrriage manually is not that bad.
Cheers, Dan