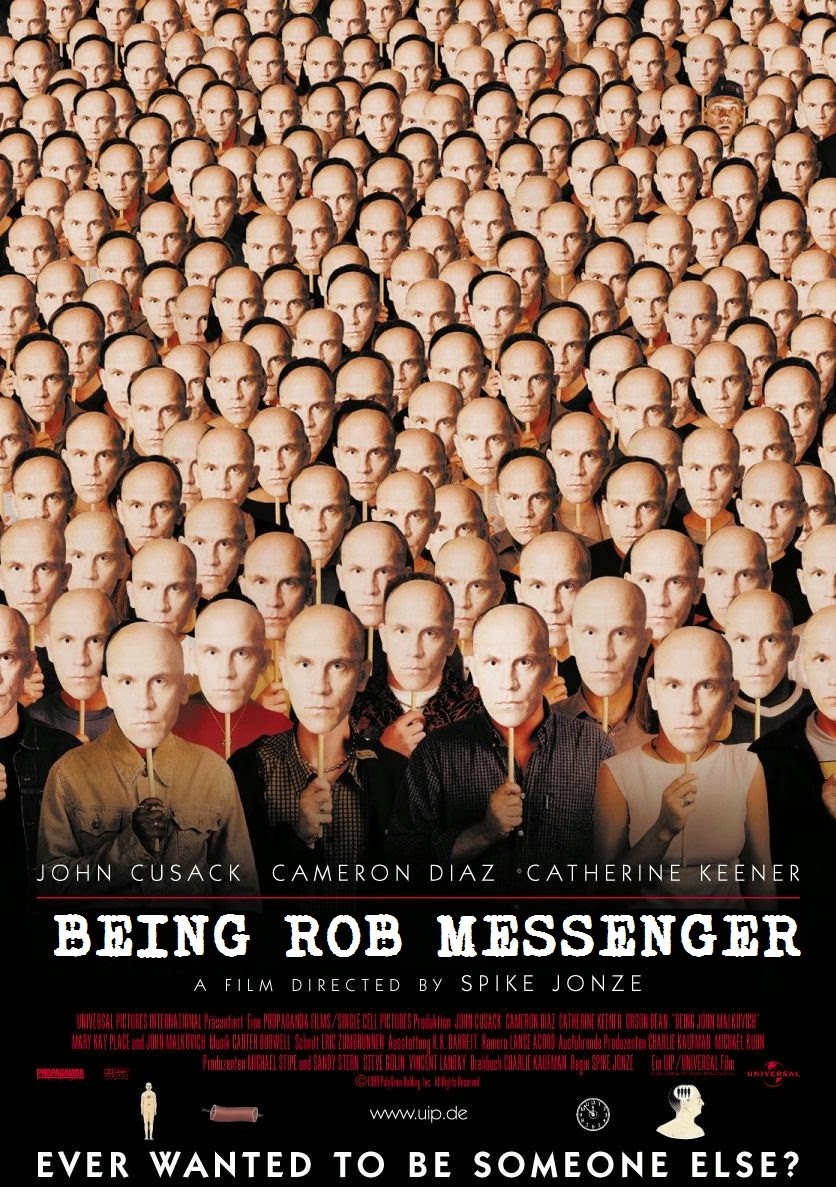 EVER NOT WANTED
TO BE SOMEONE ELSE? 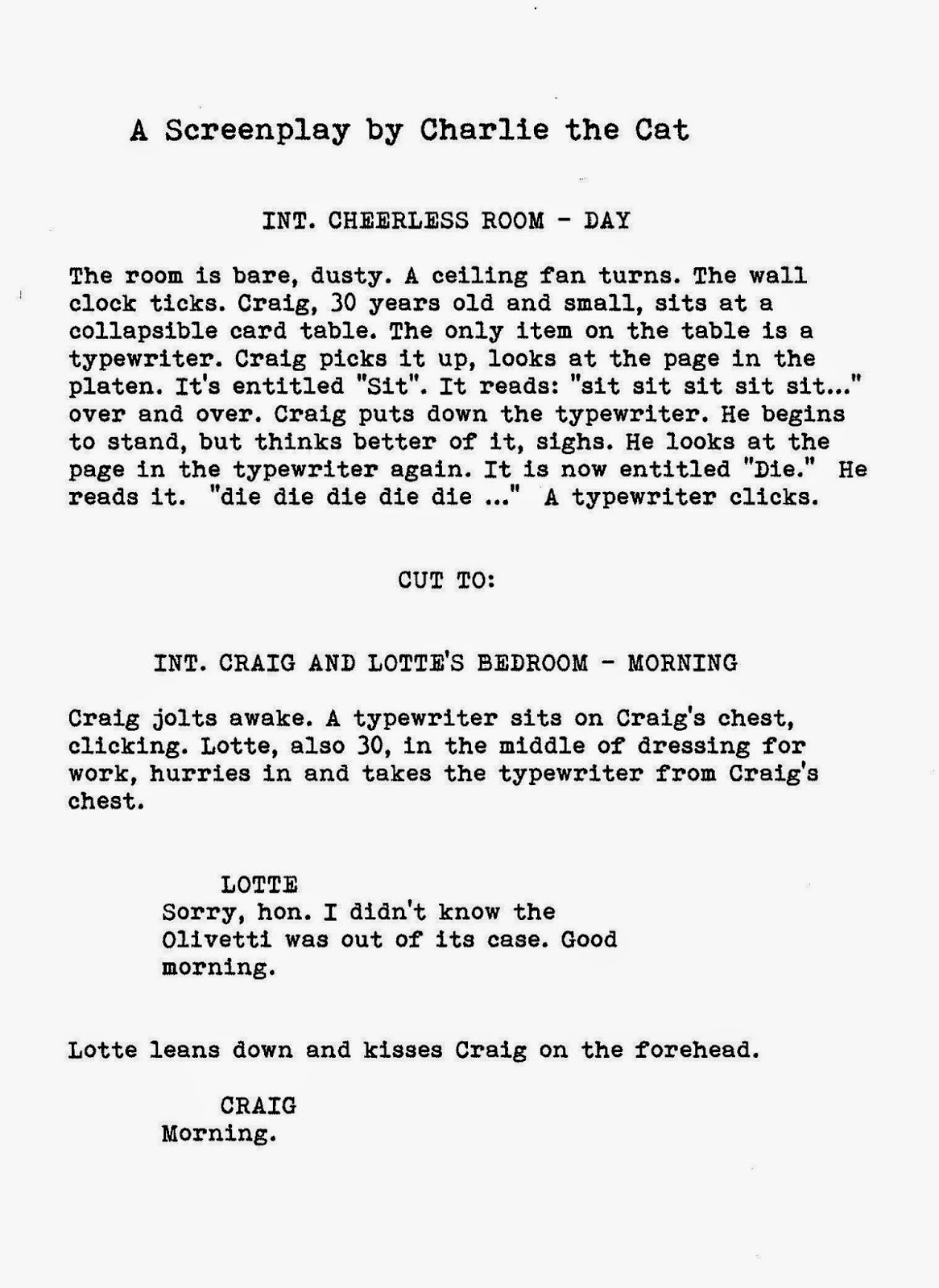 - with apologies to Charlie Kaufman
These are some of the saddest and sorriest days in Australian political history. Not since the Australian Labor Party self-destructed almost precisely 60 years ago - ensuring 23 years of Conservative rule, 17 of them under a man dubbed Ming the Merciless and Big Iron Bob -  has there been such mindless turmoil.
Back then Australians couldn't break wind without vice-regal approval. Now you'd swear our chambers comprise 226 mad farts. The Federal Parliament is a rabble, the Senate a shambles. Not one of our politicians seems capable of enunciating a properly constructed sentence. The Prime Minister keeps repeating the predicate of his sentences, as if we didn't get it the first time. Oh we got it all right, worse luck. It's embarrassing.
No doubt he's frustrated. He can't enact legislation, so he keeps on breaking election promises. Things are so bad, Australians have asked for a swap. Some Americans might even agree to go along with it. 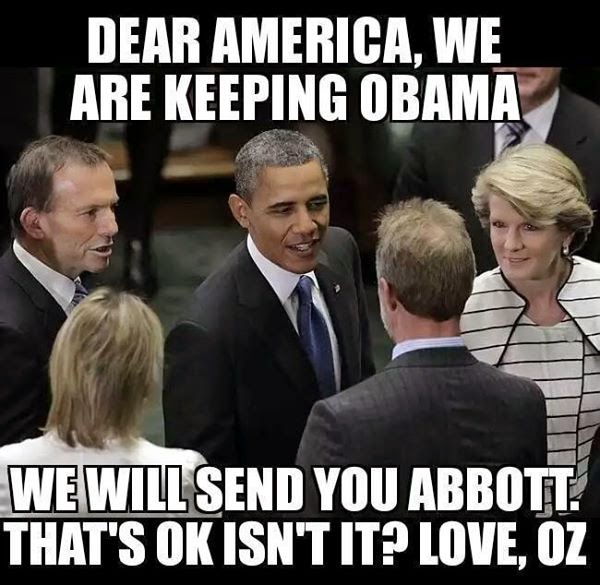 This appeared on Facebook.
In the latest prevarication, he's lashed out at the Australian Broadcasting Corporation and the Special Broadcasting Service, slashing funding to the only outlets which might offer even occasional sanity. He's been provoked, admittedly, by the ABC's response to accusations of Left-Wing bias - by having so-called "interviewers" shout even more loudly and rudely at politicians, for fear that viewers might actually get to hear what these people have to say. You never know, there might be a wise one in there somewhere.
Worse still, this is not a good time to be living in Australia with the name Robert Messenger. There are more than one of us, and one of them, I'm afraid to say, might never have used a typewriter, let alone owned one. What's more, this Rob Messenger is sitting smack bang in the middle of the one of the messiest and most pointless political confrontations going on in Australia right now. 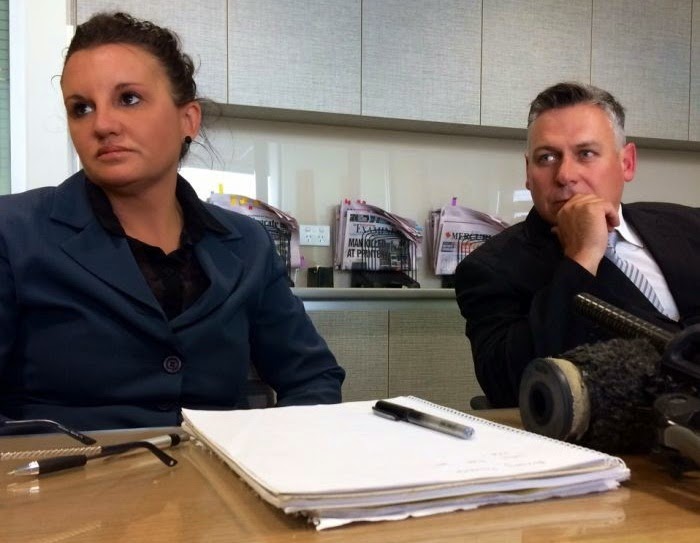 Where's the typewrier?: Lambie, left, and Messenger
This Rob Messenger is the chief of staff for a Tasmanian politician called Jacqui Lambie, who was elected to the Senate on the ticket of the Palmer United Party. Journalists soon dubbed Clive Palmer's party "PUP", but since taking their seats, these newcomers to Canberra have been far from united - more like a pack of rabid, in-fighting mongrel dogs. Consequently, Palmer United is only contributing to dividing the nation.
Confusion about the two Rob Messengers started out as a bit of an in-joke among my friends. Now it's got serious. People are stopping me in the street asking whether I am that Rob Messenger. To which, invariably, I reply in song:

It ain't me, babe,
I said a no no no,
It ain't me babe,
It ain't me you're looking for, babe
This Rob Messenger once promoted a documentary called Suffering in Silence, which I find I can no longer do. So before this confusion spreads even further, let's get it straight. This Rob Messenger is NOT ME!
He was born in Bundaberg, Queensland, a place I have only occasionally visited, usually to play rugby in the early 90s (although I was once in the psychiatric ward at Bundaberg Base Hospital getting my head sorted out). He was born on October 26, 1962, 14½ years after I was born, a very great distance away in Greymouth, New Zealand. He became an electrician and was a National Party and later a Liberal Party member of the Queensland Legislative Assembly, which is to say that politically he was a red rag to my red flag bull. 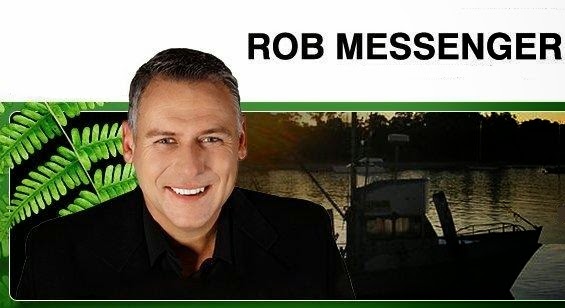 The only vague connection I can find between us is that we both had Townsville-based girlfriends, although he married his (Fern). He was also engaged to a rock chick (Tarni Stephens), which I never managed: 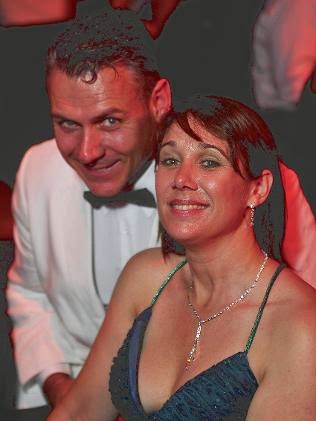 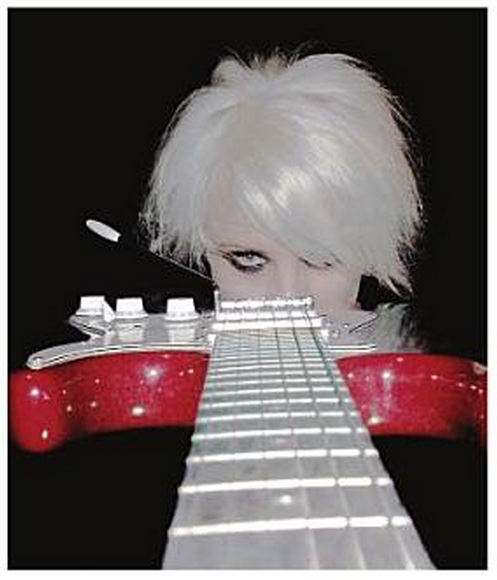 After losing his seat as an independent in 2012 Queensland state election, he joined PUP in May last year and in April this was appointed Lambie's chief of staff. He was expelled from the party earlier this month, after Lambie became embroiled in disagreements with Palmer. Palmer is a billionaire, with iron ore, nickel and coal holdings, who, as a sort of hobby, in having an exact-size replica of the Titanic built in China. 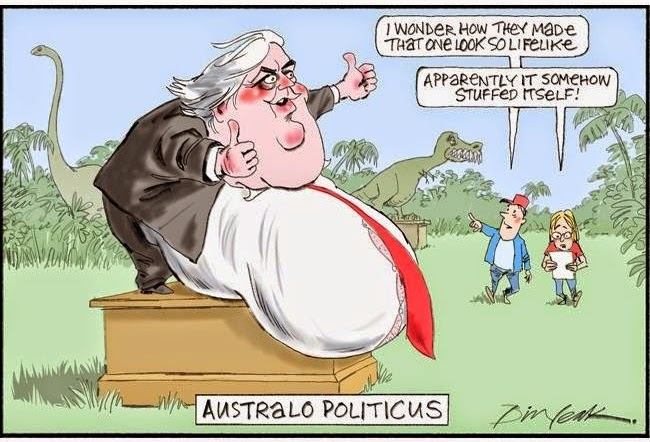 Australo Politicus: As News Ltd cartoonist Bill Leak sees Mr Palmer, who has his own Jurassic Park, called "Palmersaurus".
So, what I am objecting to in being confused with this other Rob Messenger? Well, name confusions can have serious repercussions. Five years ago one of my then very young sons was illegally ambushed by a bailiff with a summons addressed to a Robert Messenger on the Sunshine Coast in Queensland. I was living in Canberra, and have never lived on the Sunshine Coast. The summons concerned the purchase of two Aboriginal paintings worth $3000. Naturally, I took the prosecuting solicitors to the Victorian Law Association.
In this case, my opposition is to a name association with what I consider to be a bunch of reactionaries, people who are doing nothing to help sort out Australia's political morass, but are merely adding to it. As one friend wrote today, "Have you any idea how relieved I was to learn that you are not the brains behind La Lambie?" It's a typical sample of the reactions to my "It ain't me, babe" cry, one of dozens I've received these past few weeks.
Imagine me being tied up with a political party which has this logo:

Typospherians should be well aware by now of my feelings about having a Union Jack of anything Australian. The other night, watching a news item on Indian Prime Minister Narendra Modi's address to thousands of admirers in Sydney, I was enraged to see hundreds of these T-shirts: 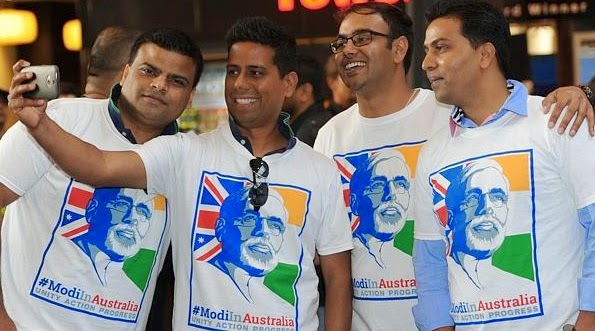 Mr Modi (along with Barack Obama) was actually visiting Australia for the G20 meeting in Brisbane. He wasn't in Britain, as these T-shirts indicate. The trouble with our flag is that, when used in this way, all one can see is the Union Jack. Mr Modi's address was relayed to the masses in India, where tens of millions would have thought he was in London, not Sydney. Same goes for Mr Obama's talks in Brisbane:

Spot a distinctly Australian flag here? No? If there was ever an argument for taking the Union Jack off our flag, the G20 gathering unquestionably provided it. Even The Big Bang Theory is about to take the mickey out of our flag (although it must be said that Sheldon Cooper thinks the koala is a bear, and he's supposed to be smart!): 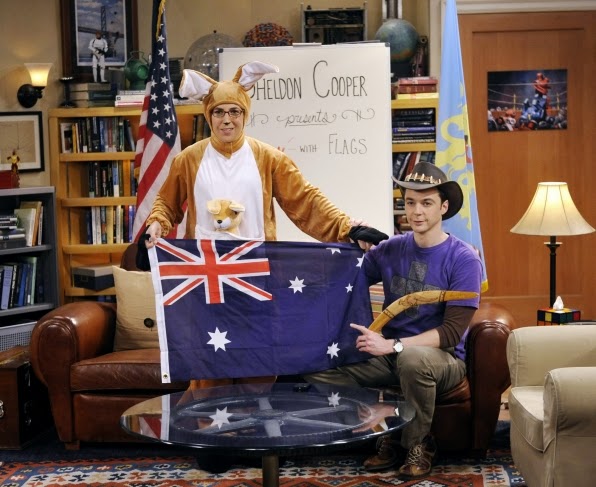 As I said, it's all too excruciatingly embarrassing! (Thank goodness they're ending the tired old "Fun with Flags" joke.)
Posted by Robert Messenger at 16:10

Must be terrible having the same name of a blasted politician.

I often exclaim, What ever happened to Statesmen? Those who truly care about their contry rather than their special interest(s).

Sounds like 2 countries with disfunctional 'leaders'. Seems neither know how to lead.

You're dead right, Bill. I was only just thinking the same thing myself. The problem with our present Government is that it hoodwinked the voters and got elected by promising to secure the long-term economic good health of the country, when all it really wants to do is secure its own long-term tenure. It actually doesn't give a stuff about the country and its people.

PS: Of course, Obama has now upset our "leaders" by pointing this out in Brisbane. They're bristling over Obama embarrassing them about climate change policies, for example.

Sorry Robert for the "pickle" that your in- both you, and your country!
US politicians are just as screwed up, too. Can hardly trust a one of them - especially the Republicans! Some of our country just voted them into more power - it doesn't make any sense. I hope we survive it all!
Wish we could do like France does, where you can vote for "none of the above, start over"

Tumultuous political times here in the USA, also, so I can sympathize. I'm fortunate enough to have a fairly unique name...enough to keep me from being confused with politicians, anyway.

I'm embarrassed to admit I'm an avid watcher of Sheldon and his show, but I've not yet seen the Aussie flag episode.