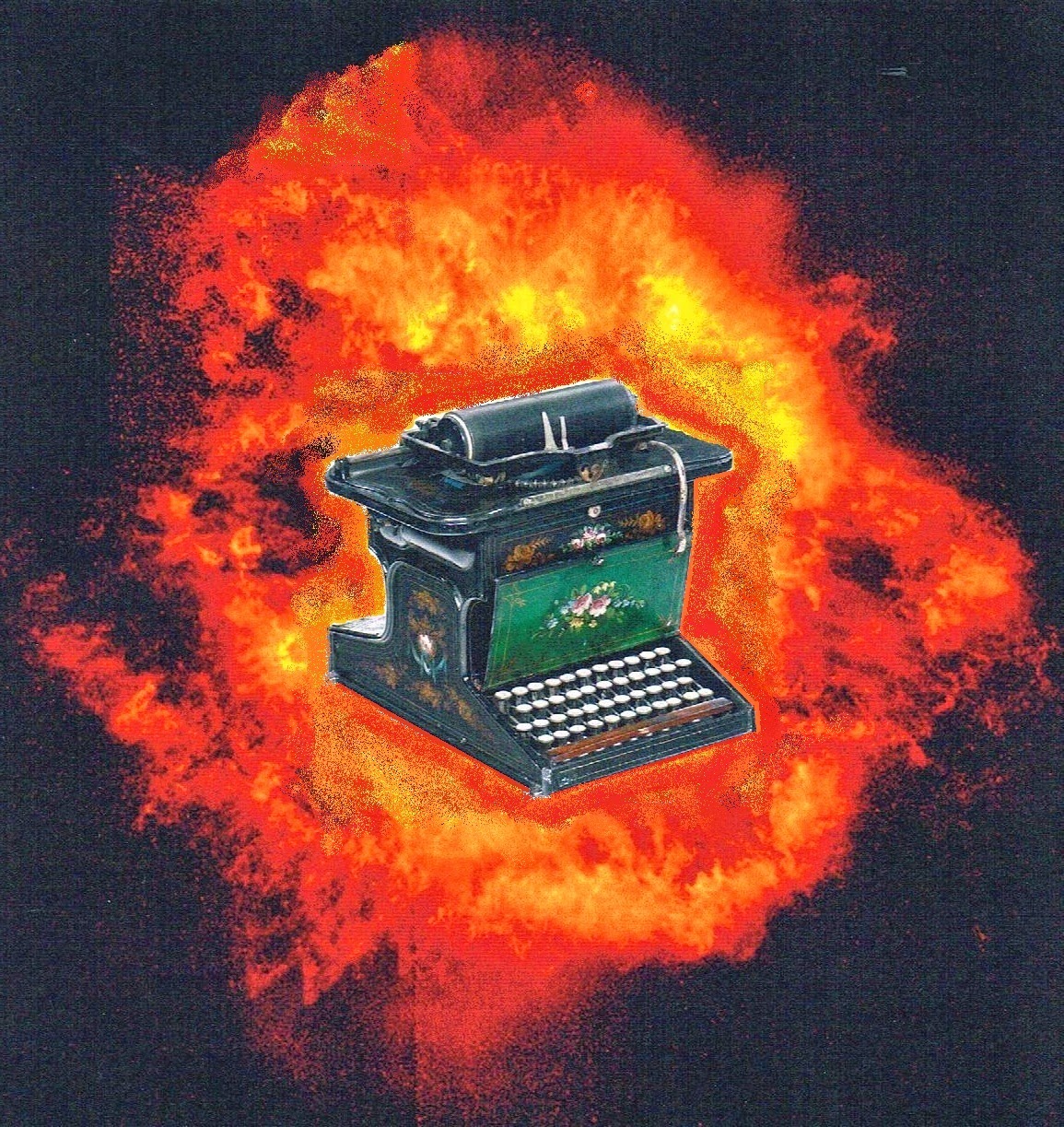 To mark my 1800th post (and my own return to newspaper print) I want to salute the newspaperman who first embraced the typewriter and set it alight, Asael Othell Bunnell.
Within 18 months of the typewriter first reaching the market, American newspapers were reporting: 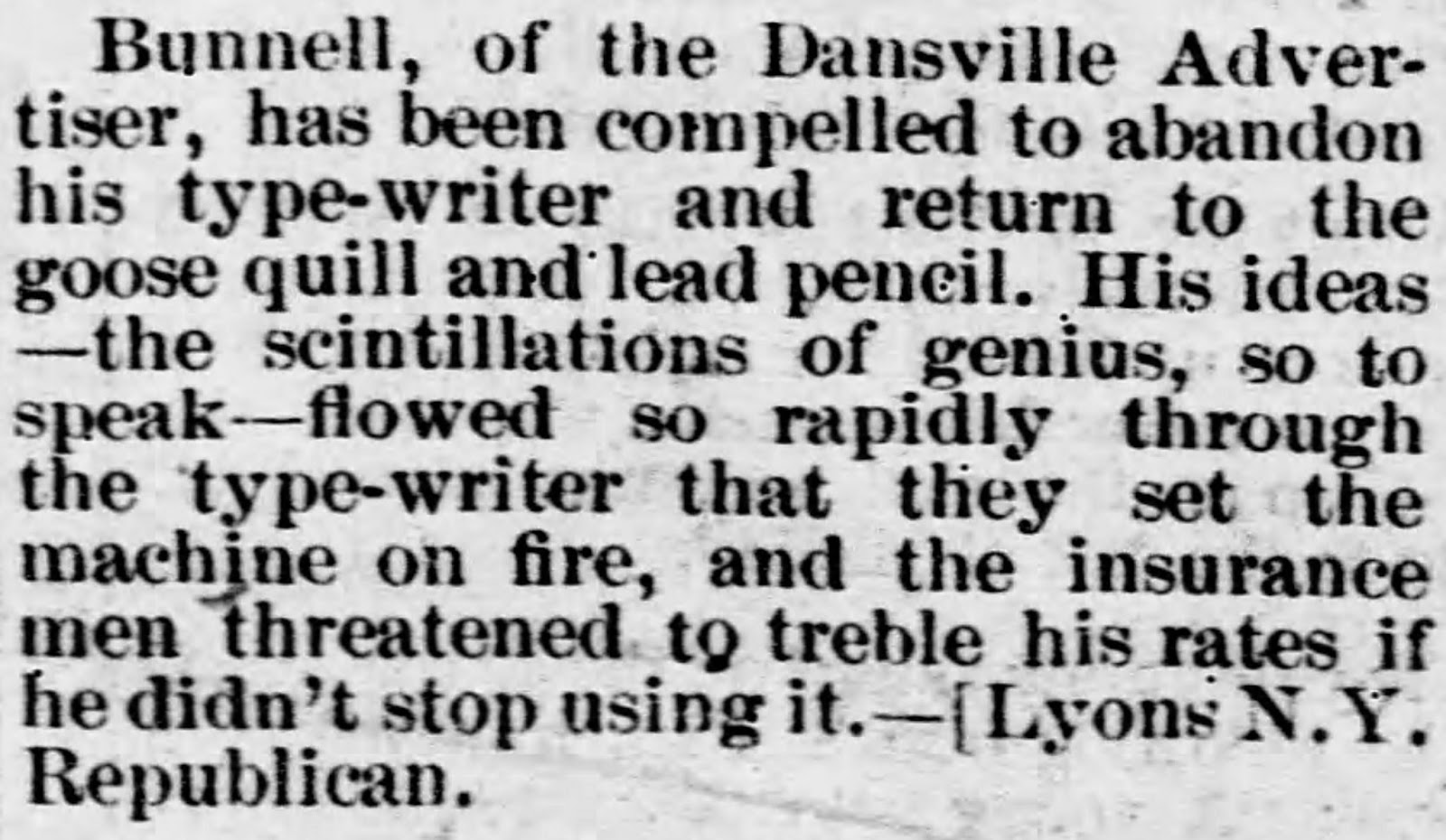 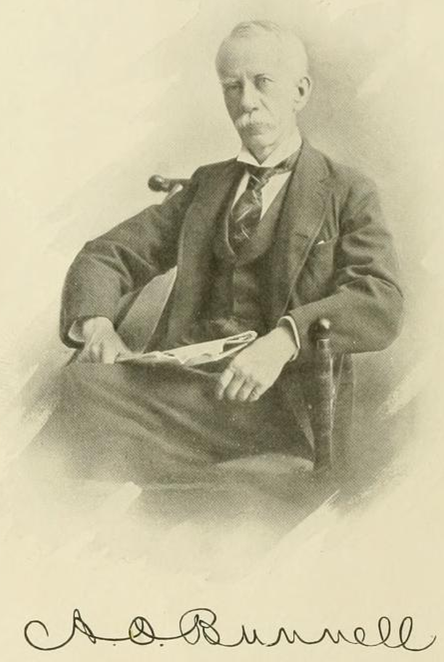 Asa Bunnell
In 1902, John A. Sleicher, editor of Leslie's Weekly, New York City, wrote, "No newspaperman in the state of New York, and probably none in the United States, is more widely known and more generally loved than A. O. Bunnell, the editor of the Dansville Advertiser. For over half a century the smell of printer's ink has been upon his garments."
Asa Bunnell was born in Lima, Livingston County, New York, on March 10, 1836. He moved to Dansville at the age of 14 and at 16 became a printer's apprentice at the Dansville Herald (which would eventually become the Genesee Country Express).  In 1860, aged just 24, he founded the Dansville Advertiser, and remained its owner, editor and publisher for the next 48 years.
"The paper typifies the man. It is a beautifully printed paper — clean and wholesome in its contents, elevated in its moral tone, and powerful in its widely exerted influence," wrote Sleicher. "Mr Bunnell has never sought public preferment. The love of his profession has kept him loyal to it. In the congenial atmosphere of the printing office, as boy and man, he has taken his greatest delight and realised his highest ambitions."
Bunnell was secretary-treasurer of the New York Press Association for 34 years, having become a member on its reorganisation after the Civil War, in 1865. In July 1894 he was elected president of the National Editorial Association, representing 20,000 newspapermen across the nation.
Bunnell died in Dansville on December 1, 1923, aged 87.
Bunnell started using a Sholes & Glidden typewriter when the machine was still in its infancy. The coming of its advent was heralded in a "New York Letter" which appeared in the Bucks County Gazette in  Bristol, Pennsylvania, on September 25, 1873: 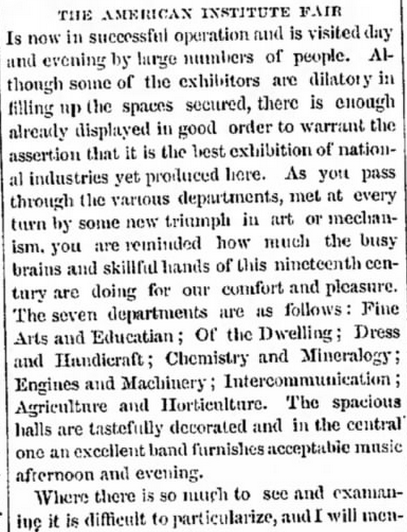 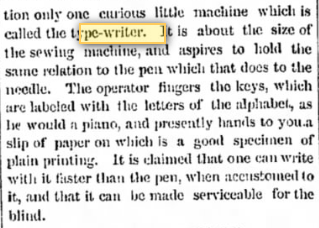 There were no news reports of its actual launch on the market, on July 1, 1874, and initially no mention of its inventor, Christopher Latham Sholes. Indeed, credit for it was in March 1874 given erroneously to Western Union's chief operator in Atlanta, Georgia, English-born George Albert Gustin (1842-1905; birth surname Peacock). Gustin, who had worked with General Robert E.Lee while in the South, moved to Washington and became stenographer and secretary to President Rutherford B. Hayes, the first president to have a typewriter in the White House. Gustin was also private secretary to four Postmaster-Generals. 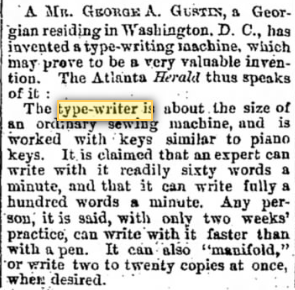 The Galveston Daily News, Texas, March 3, 1874
In May 1874, the Missouri Granger in Macon and the Red Cloud Chief in Nebraska credited James Densmore, the typewriter's chief promoter, with its invention. Its appearance at a Boston Exhibition of Art and Industry was announced in August.
Advertisements for the "greatest invention of the 19th Century" began to appear from early March 1875: 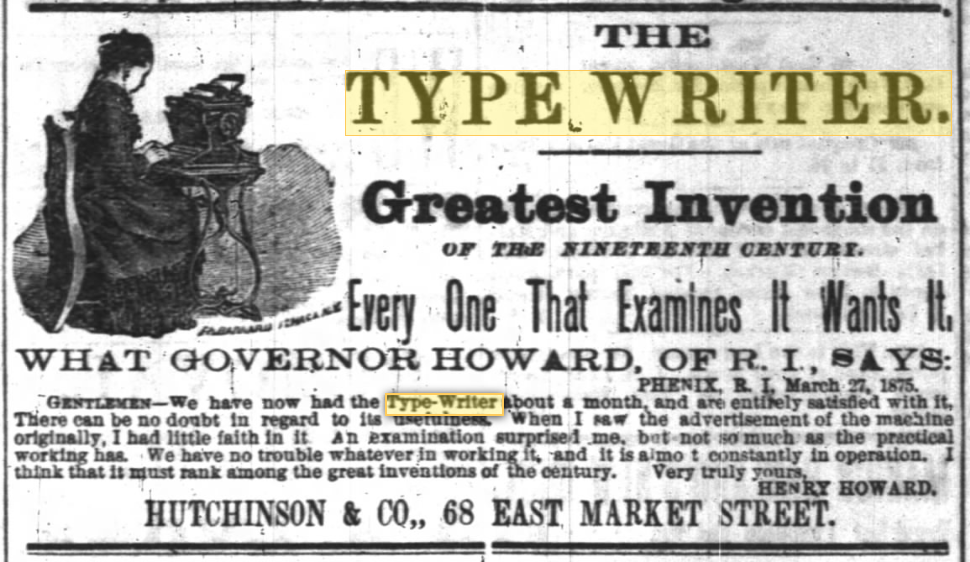 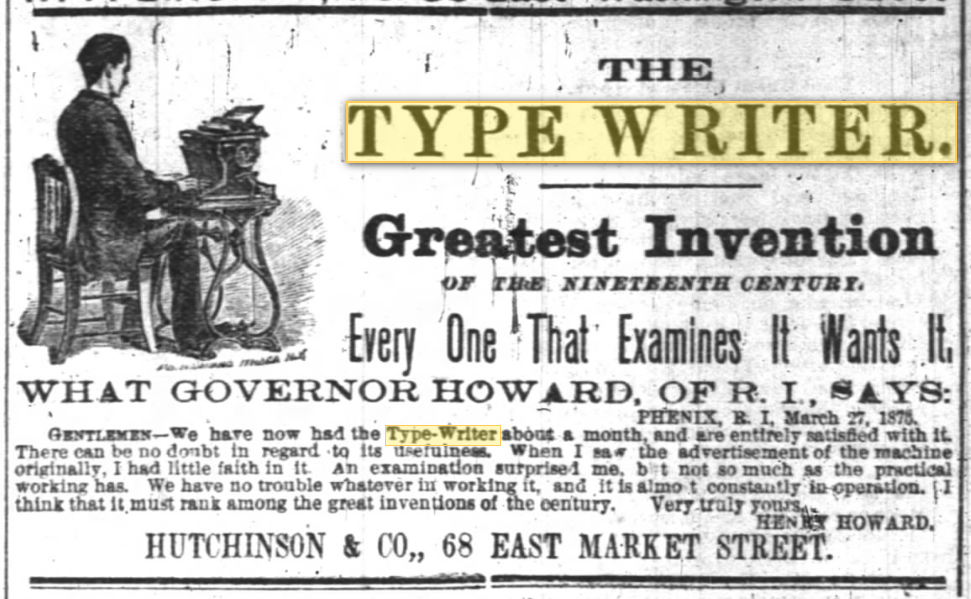 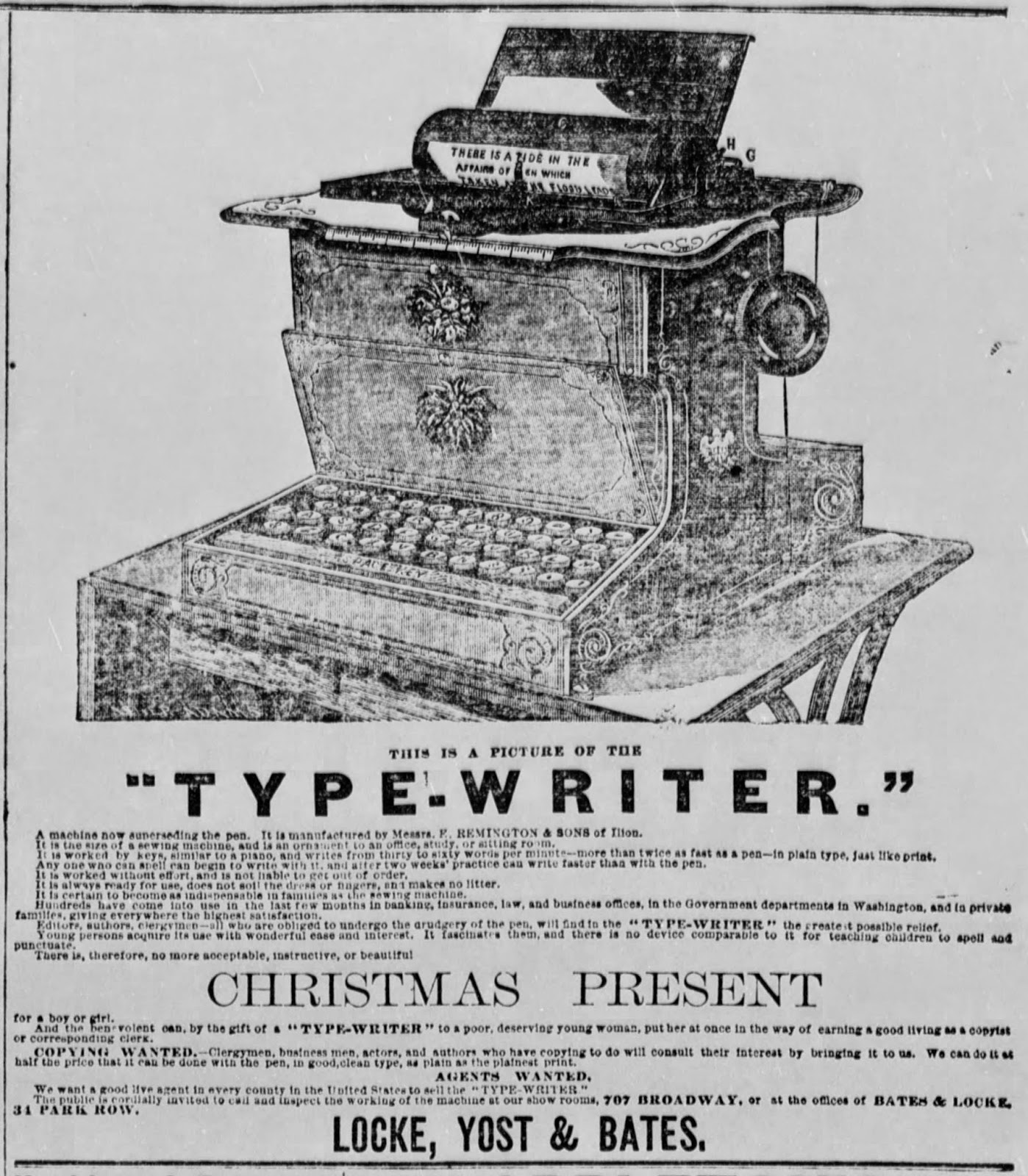 A fortnight later in, Dansville, New York, Asa Bunnell, whose creative surges had so inflamed his Sholes & Glidden, allegedly found the typewriter just "to hot to handle!"
"Bless the world"

It is interesting to note that the "type-writer" was advertised from the beginning as a Christmas present.

Bunnell seems to have been a man of wit.

But what's this about your own return to print? Tell us more!

Thank you Miguel and Richard for your comments.
Richard, I thought you might take a shine to Mr Bunnell.
As to my return to print, tentative steps so far (a cautionary tale of women in sports management, didn't want to bore you with it), but am hoping to restore my weekly column to full health at some time soon.
Under our tax regulations, I couldn't work for Fairfax Media for two years after being sent out to pasture (that is, "pensioned off"). That two year "ban" ended on October 31, so I am now able to return. Fingers crossed there may be some "pin" money in it for me!

So it's been two years already? I do hope you can return to writing a weekly column -- it's in your blood!