Nineteen years and nine days after Christopher Latham Sholes had passed away in Milwaukee (on February 17, 1890), New York and Washington DC newspapers reported the death of the "inventor of the first working typewriter".
Confused? Well, so obviously were the newspapers which reported on the death of Cincinnati's Benton Halstead in Washington on February 26, 1919: 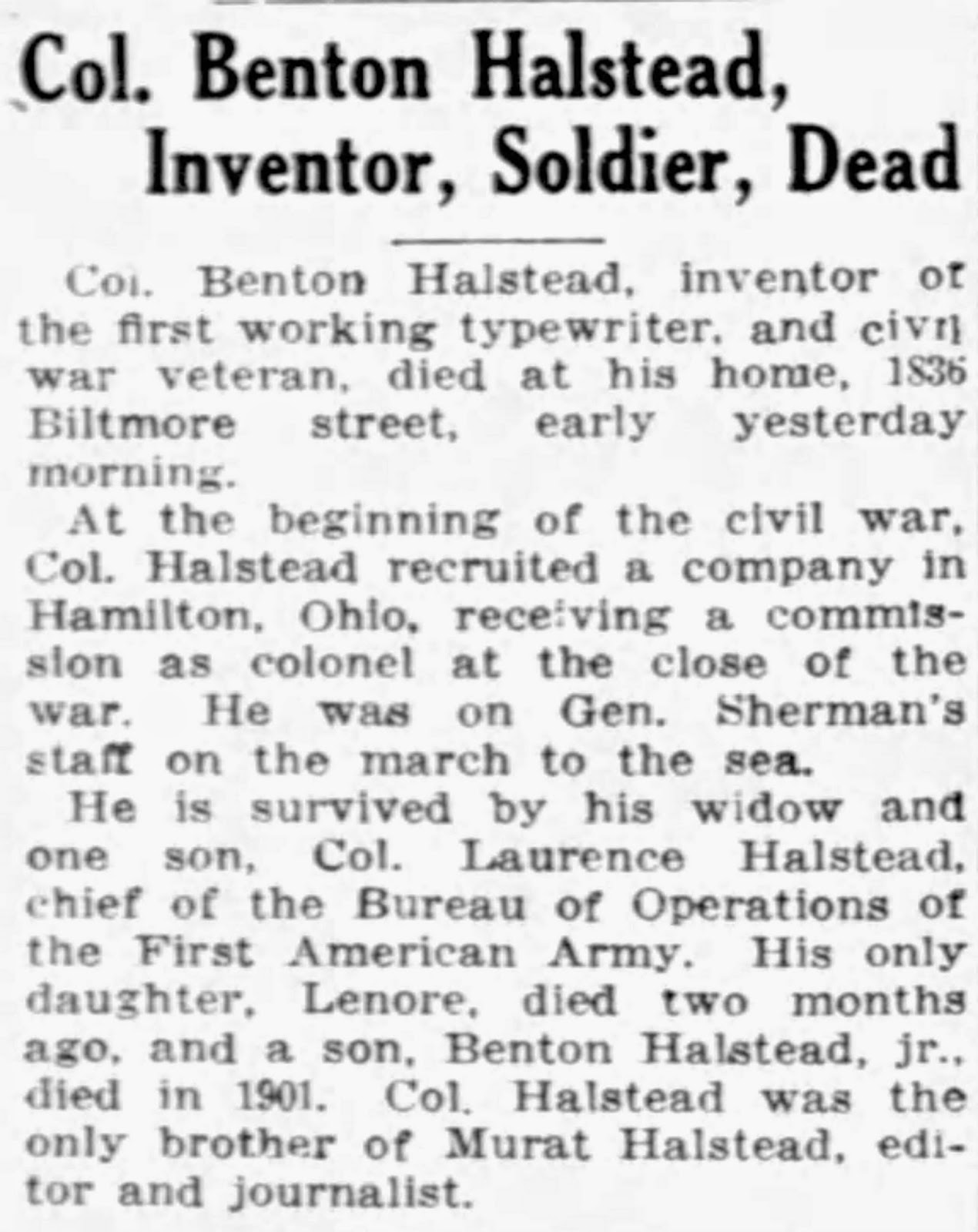 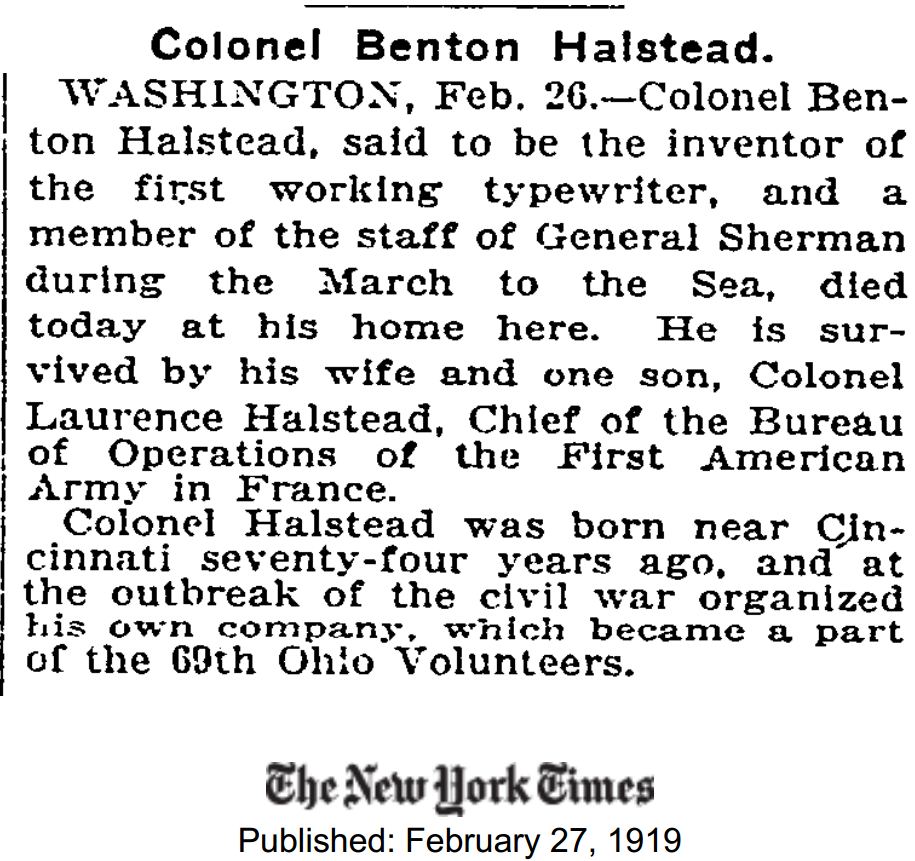 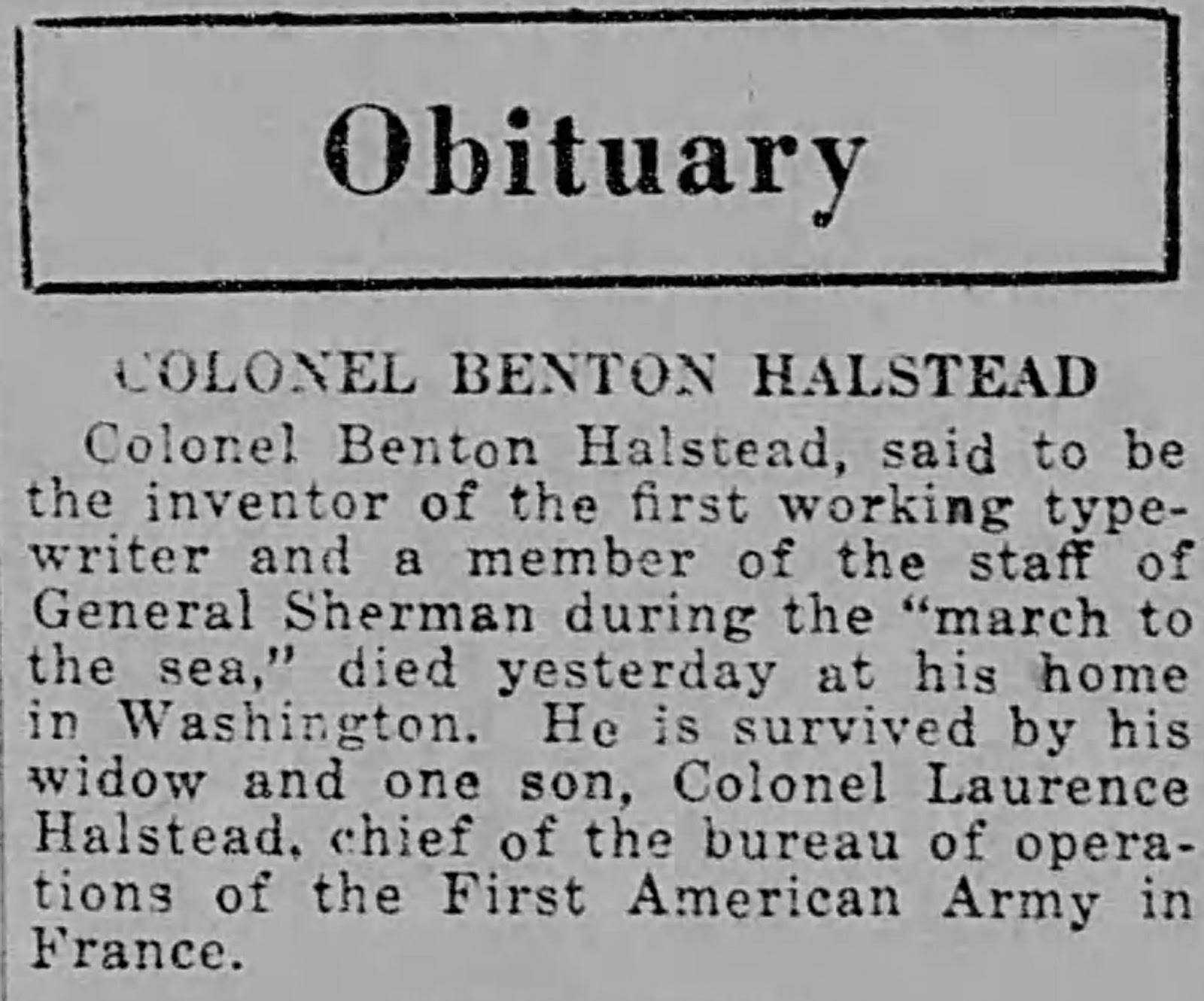 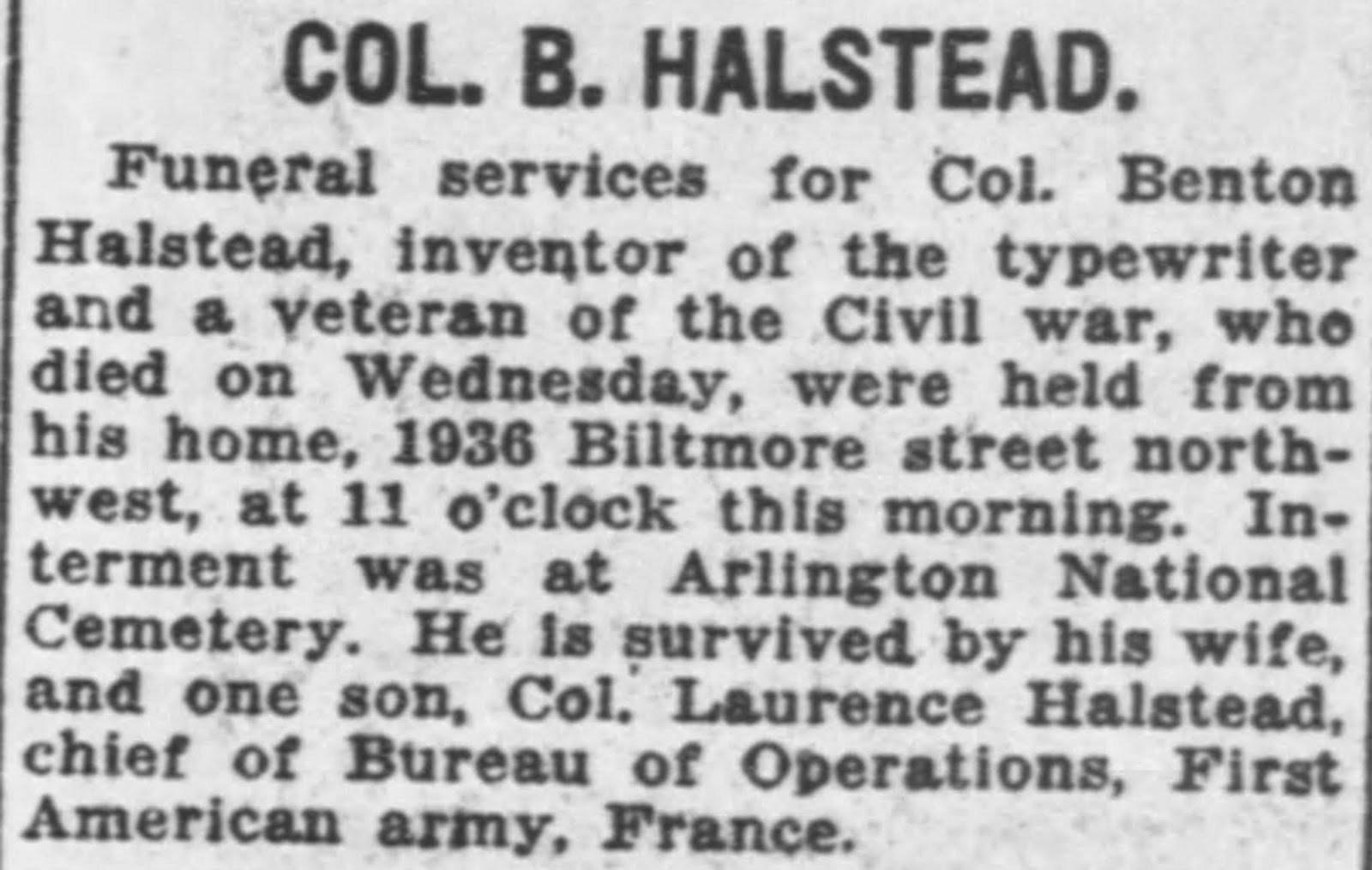 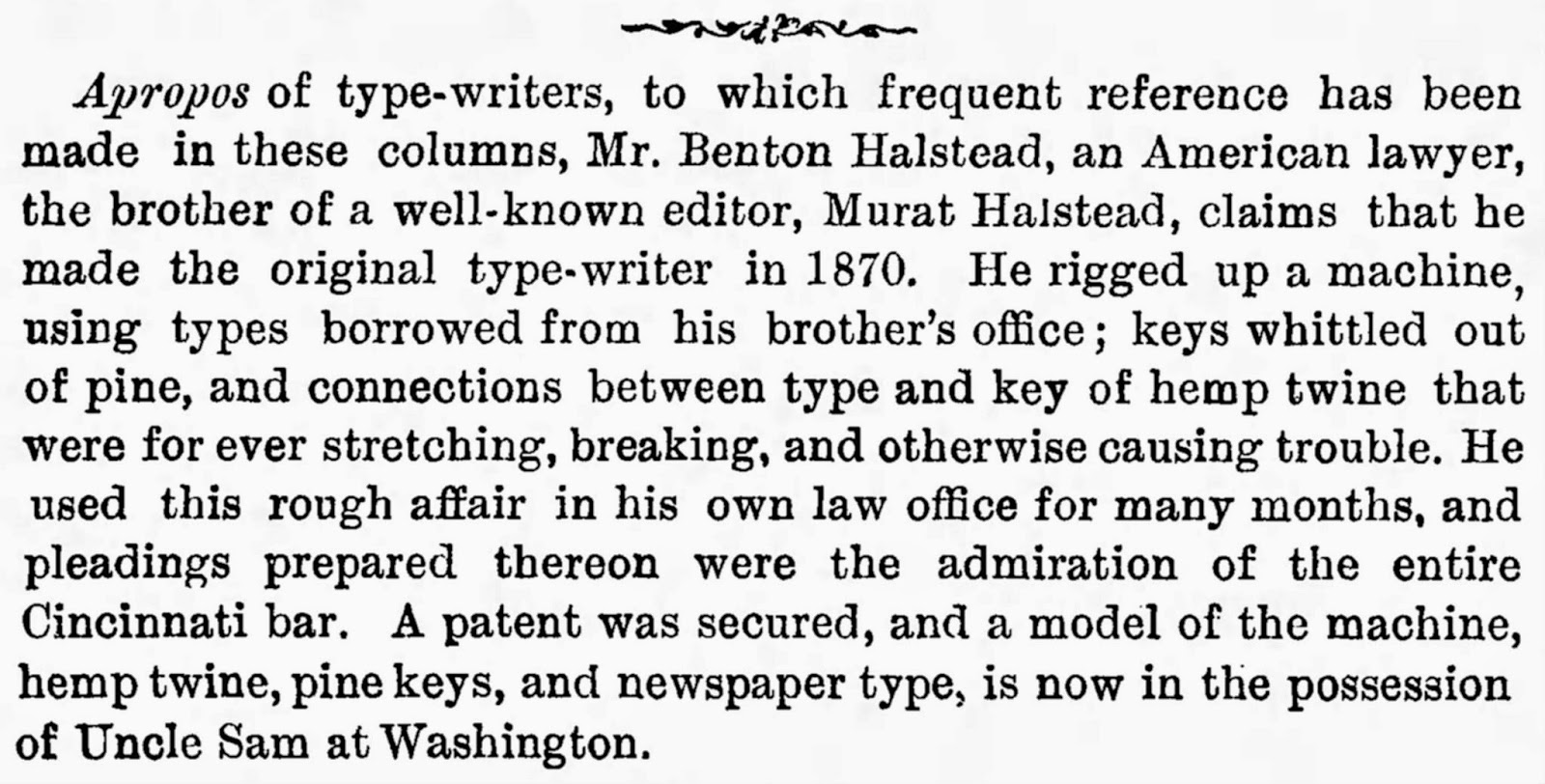 The Colonies and India, February 7, 1891
Now, the Halstead claim is worth considering. At least two of his typewriters were made, in Atlanta, Georgia, before the burning of the city in September 1864. Halstead didn't patent his "improvement in type-writing machines" until 1872, but it seems certain his typewriters did beat Sholes's in being built by at least six years.
Halstead assigned his first typewriter patent to the famous Cincinnati Commercial journalist, chess writer and war correspondent Captain Joseph W. Miller (1838-1925), and it was Miller who would later take one of Halstead's brass typewriters with him to the St Louis Globe-Democrat, when Miller became its editorial writer in 1892. 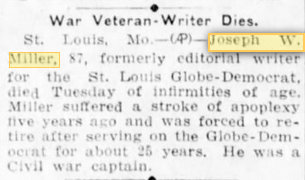 German typewriter historian Ernst Martin, who also dates the Halstead machine to 1864, mentions that one of them was on display at the St Louis Globe-Democrat, as does a family historian, William Leon Halstead, in his 1934 book The Story of the Halsteads in the United States.
Martin adds that another machine, which he says was owned by Halstead's widow, Rowena Halstead, was intended for the National Museum in Washington. However, it would seem it never made it there.
Martin says the Halstead typewriter was completed in Atlanta on July 21, 1865, and was "used in his [law] office in Cincinnati, at 68 West Third Street". Halstead lived in Riverside.

Interestingly, Typewriter Topics did not mention Halstead's death in 1919, nor the inventor in its 1923 history of the typewriter. But a sister journal, Office Appliances: The Magazine of Office Equipment, did report his death, saying Halstead "was among the early inventors who worked on the problems of the typewriter." It also said his passing "had brought forth recollections" of "How one typewriter model developed".
Michael Adler described Halstead's typewriter as a "downstrike machine with a semi-circle of typebars at the rear and a piano keyboard at the front". "Typebars printed down on a flat paper carriage, weight driven, through a ribbon, and spacing was by means of a stirrup." 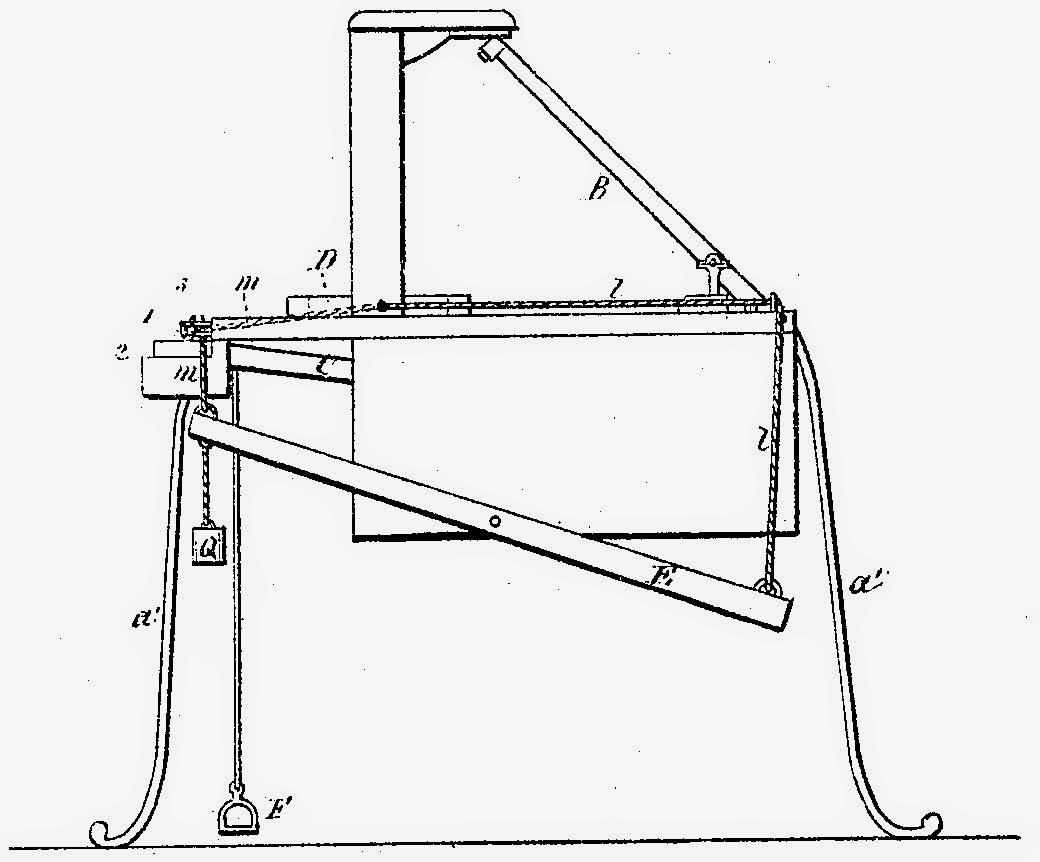 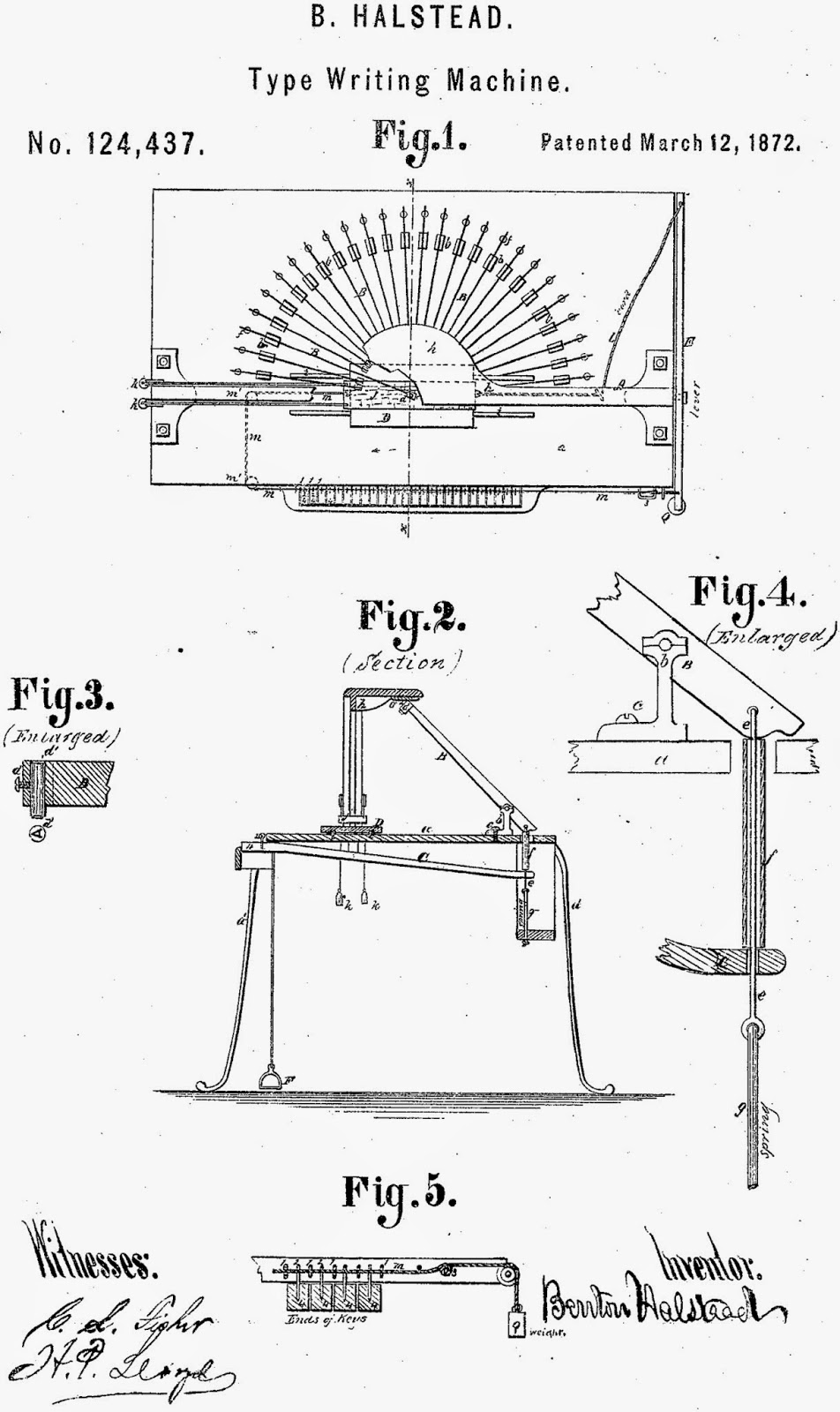 What neither Martin nor Adler mentioned is that Halstead applied for an unassigned second typewriter patent five years after the first, in March 1877: 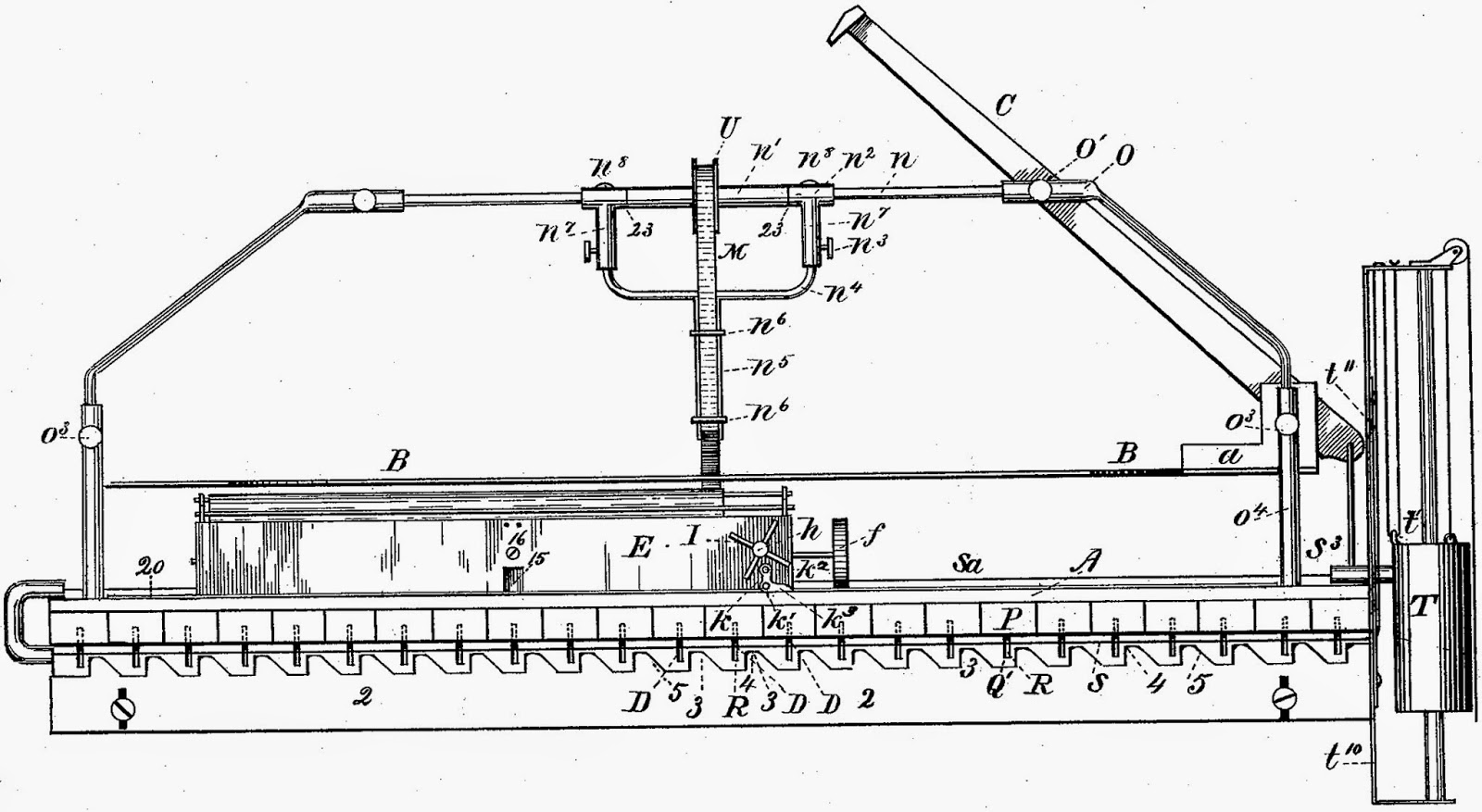 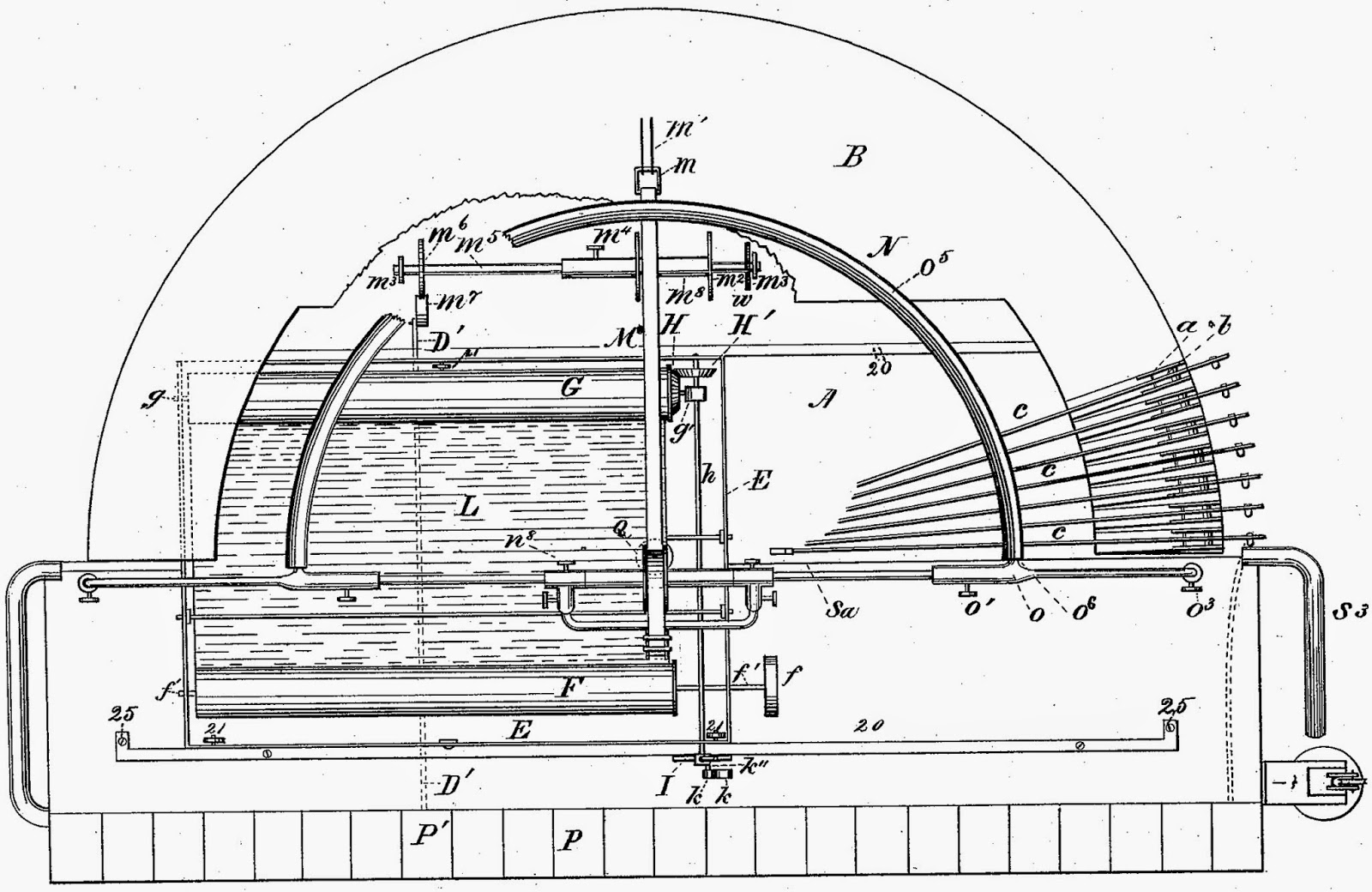 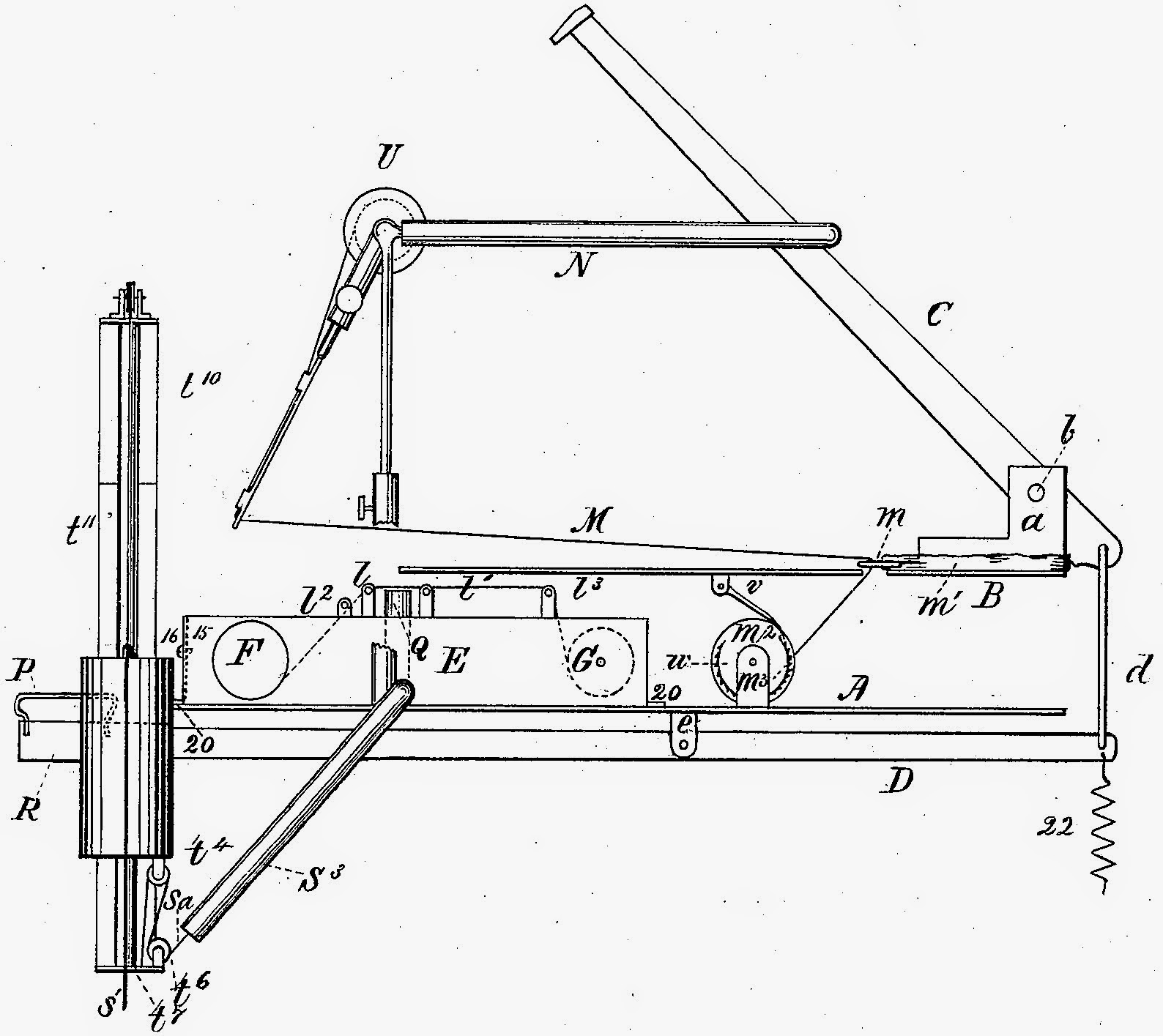 Benton Halstead was born at Paddy's Run, outside Cincinnati, on March 11, 1834.  As a colonel in the Civil War, he led a regiment of the Ohio Volunteer Infantry. 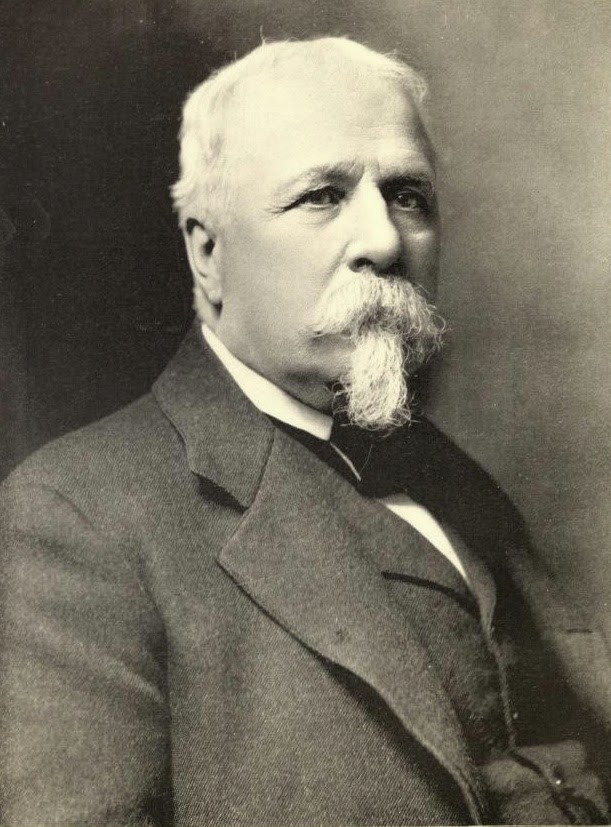 Murat Halstead
His brother was Murat Halstead (1829-1908), a famous Cincinnati journalist, author and publisher who joined the Commercial in 1853, became its editor in 1865 and its president when it consolidated with Gazette in 1883. He wrote 3000-500o words a day, sometimes for 100 days consecutively during presidential campaigns. He moved to New York City and became editor of the Brooklyn Standard Union. 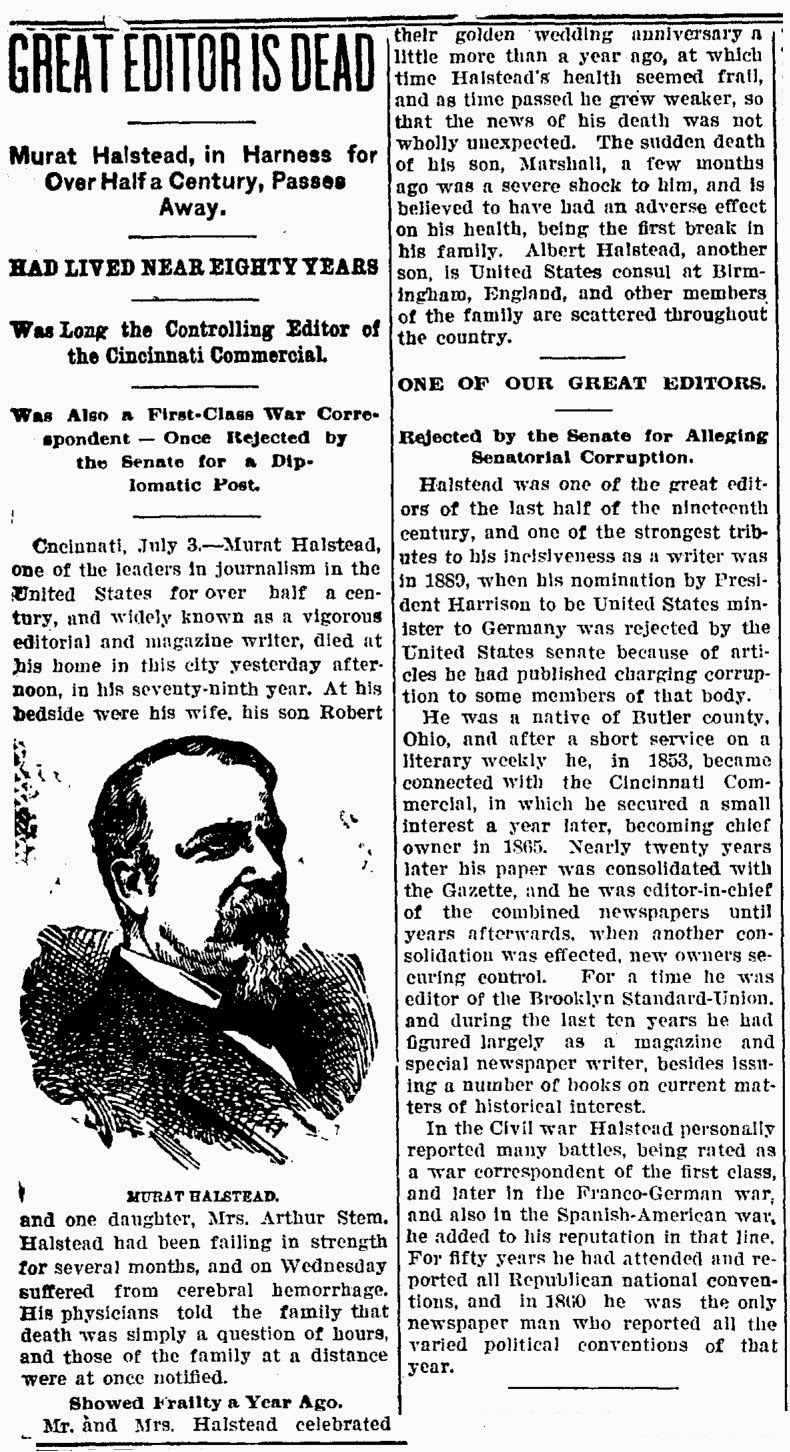 Benton Halstead's son Brigadier General Laurence Halstead DSM (1875-1953) was instrumental in developing the finger printing method that is used today for identification of criminals. Father and son are both buried in Arlington National Cemetery. 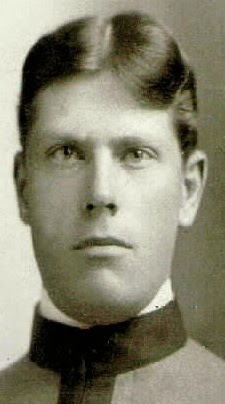 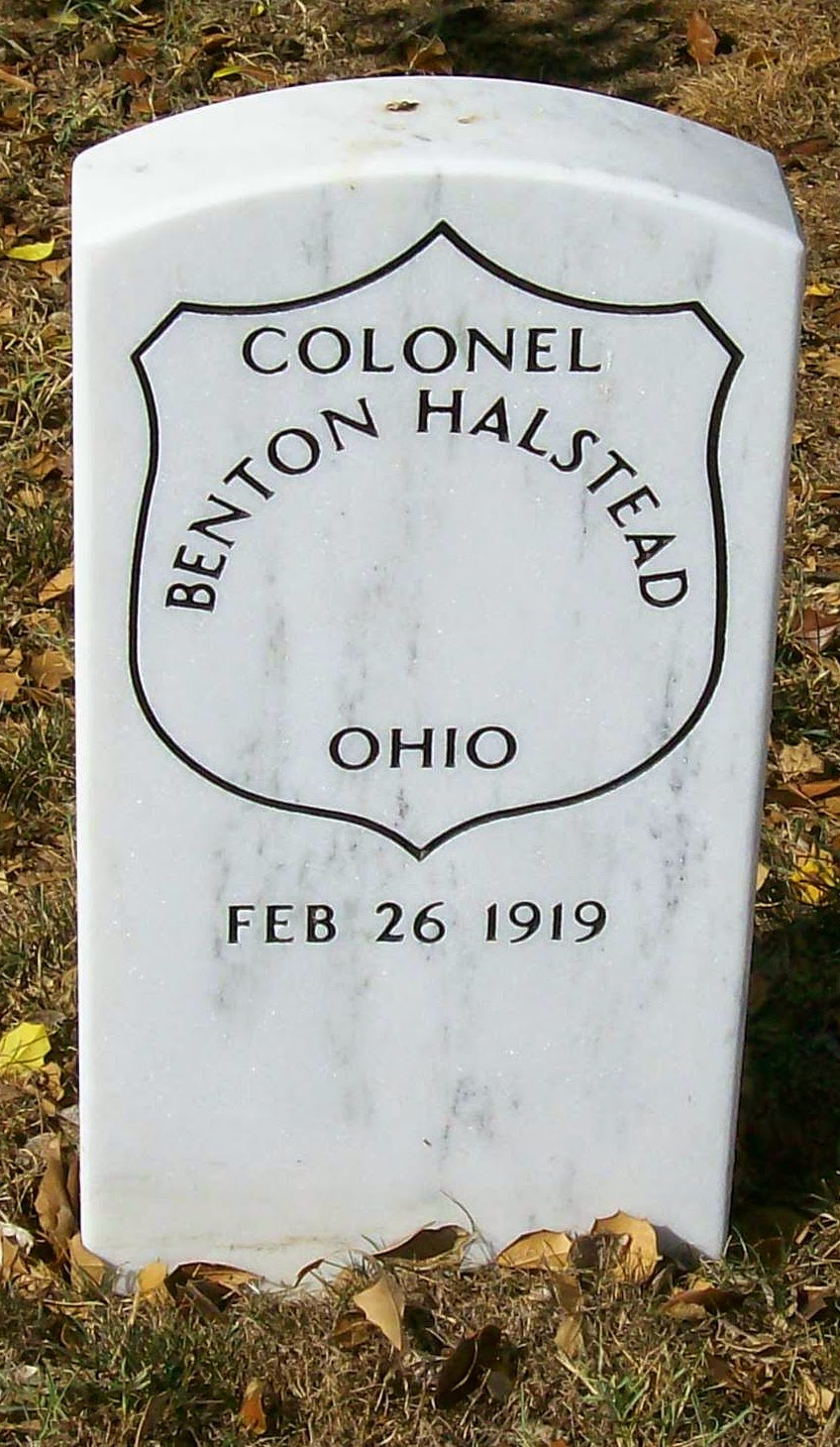 Posted by Robert Messenger at 00:04

Fascinating. I knew nothing of this Cincinnatian. Maybe I'll find one of his typewriters around here. (A man can dream.)

First I heard of Mr. Halstead.

Thank you Richard and Bill.
Richard, there has to be a possibility you will find one.
I could only read a snippet view of the two Office Equipment articles, but the second one suggested Rowena Halstead was offering some information about its whereabouts. Washington?
And surely the St Louis paper didn't throw out theirs.
I suspect Martin's detailed information must have come from the Office Equipment articles. If we could read those we might find out something.