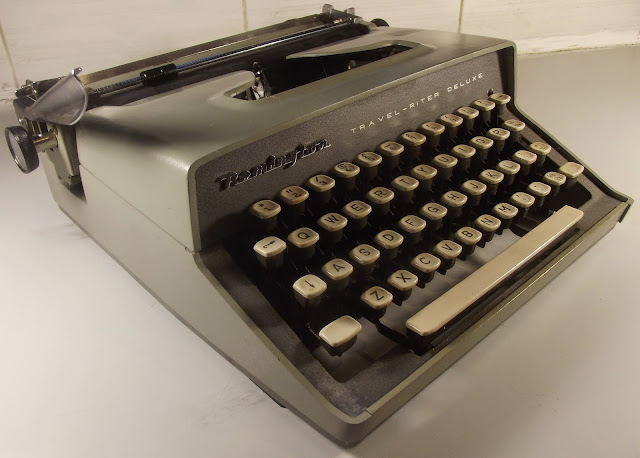 This model also appears as a Monarch and an Envoy.
About a month ago, after visiting the Nicksons to see their Depression Era typewriter collection, I popped into a bric-a-brac store on my way home and was shown a much later Remington Monarch portable typewriter. Actually, it's a Travel-Riter DeLuxe, but it's basically the same thing as what I am more familiar with as a Monarch.
These are early 1960s Dutch-made versions. The store owner had bought this one before finding out it didn't type. The typebars moved, the carriage didn't. That the carriage didn't move distracted me from what turned out to be other major issues: tell-tale things like the ribbon vibrator not moving, the ribbon spools not turning  and the ribbon colour selector switch not working.
Anyway, I turned it upside down and noted the key and spacebar mechanisms were all working, to a certain point. But the most noticeable sign of trouble was the distinct rasping sound the carriage made when moved from left to right. So I realised I'd have to take it home and take it apart to get at whatever was causing the problem. The store owner was happy for me to do that, of course, since she wasn't going to be able to sell it the way it was.
Yesterday I got around to the task. Fortunately, I'd taken apart another very similar, though slightly earlier design, so I could compare the workings between the two. The first thing I realised was that someone else had taken the problem portable apart before me, and hadn't put it back together very well. For one thing, they hadn't replaced the factory screws, but put in much more modern and larger Phillips head screws. I'm assuming the original owner had tried to fix the machine, failed to do so and reassembled it badly, then sold it as was.
First I loosened the escapement rack. There was clearly some impediment under it, stopping it from being lifted up smoothly. In the process of trying to lift it out, and with all the jigging about between the two machines, the source of the problems quickly became readily apparent. In fact, it almost dropped out on to my lap. But not quite - it was still stuck at one end in the escapement rack.
It was a rod under the right rear of the machine, as I faced the typewriter from its back end. Only then did I realise the ribbon colour selector switch, the ribbon vibrator and the spool capstans were all banjaxed. They couldn't work because the flanges which would normally operate all this gear were attached to the unattached rod. It had been jarred loose from its screws. 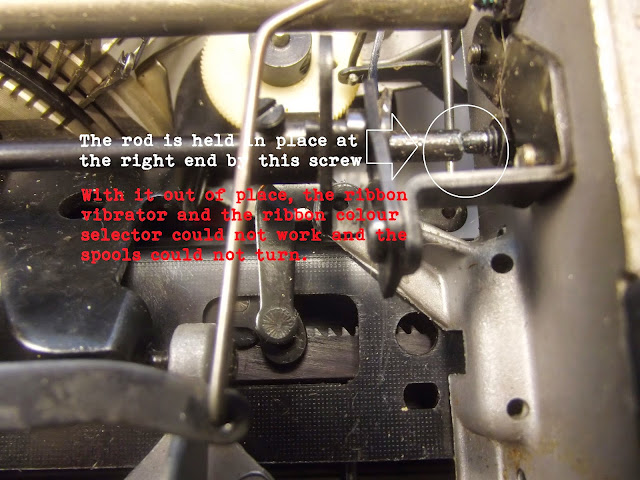 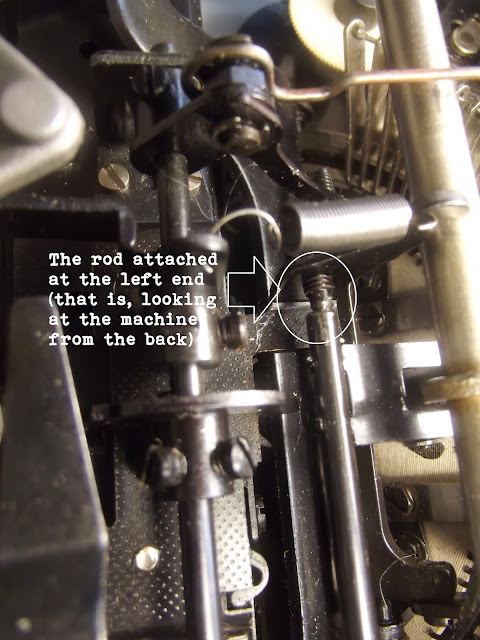 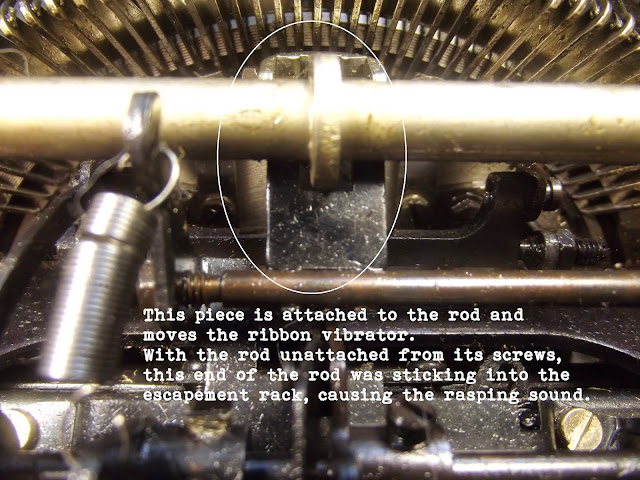 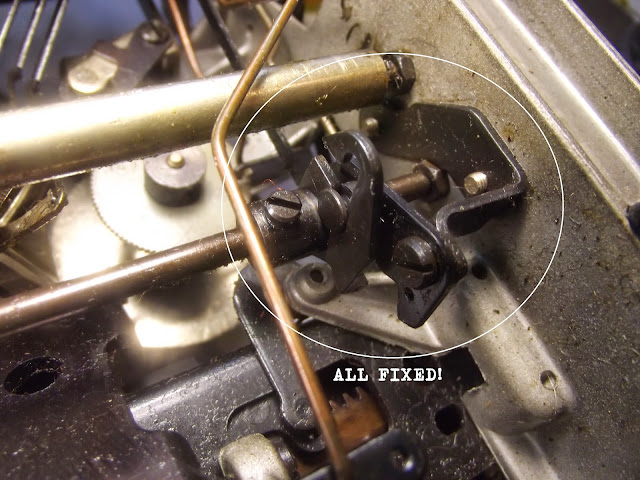 Apart from the end sticking up into the escapement rack, the rod had come completely loose. It is hollow and is normally held in place by screws at either end. The screws were impossible to loosen, so I had to wedge the rod back into place between the screw ends, which I managed with some effort. All the while I had to ensure the flanges which operate the ribbon colour selector and the spool movement, and the piece which moves the ribbon vibrator - all of which is cogged to the star wheel and moves the carriage - were placed and held together in their proper positions by this rod.
Breathtaking just to read about it, I know, and breathtaking to do it.
But, once done and, voilà! The typewriter types!

I suspect this problem resulted from a design fault. With the earlier model, the colour selector switch is far more straightforward - simple but effective. On the problem typewriter, the design has changed to a dial inserted in the mask beside the keyboard. My experience indicated that this was stiff and didn't work very well. I reckon that with any sort of pressure applied to it, it could bugger up the typewriter. After all, the flanges at the rear of the mechanism have to move somewhere if one forces the switch to move, and that somewhere comes into being when the rod holding the flanges is pushed off its screws. Maybe the original owner, in forcing the colour selector switch, dislodged the rod. That's my theory, anyway ... 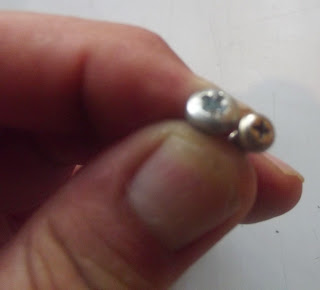 The original factory brass nickel-plated screw is on the right, the newer (though already burred) zinc-plated screw left.
Posted by Robert Messenger at 21:05

Nice repair Robert. Great set of detailed photos to keep in mind for this or similar models.

I am currently dealing with a "banjaxed" early Underwood portable that's driving me up the wall.

Robert, what do you know about the changes to this machine when it became a Dutch-built Monarch 2 in the 70s? It seems the mechanism was simplified and done more cheaply. I'm wondering if the factory in Holland had a different machine design that they used for various models, or if the new Monarch 2 was somehow loosely based on this earlier machine which is said to be derived from a Torpedo 20. Here's my link to this new Monarch 2.

And here are some naked guts shots of this Monarch 2 - a facebook album: