I still hadn't had my early morning "wake-up" cup of coffee in my Xavier University mug (with broken handle) when I read Richard Polt's comment on my post from yesterday about Doug's SM2 Olympia portable typewriter. So, not being as alert as I might have been, I immediately went into a bit of a flap, thinking I might have got it wrong, and it was an SM3. However, it turns out the main distinguishing feature between the SM2 and the SM3 is tabulation, the key for which normally sits up on the top right of the keyboard. I was right to assume the SM3 is the DeLuxe version of the SM2, although, the tab key apart, it isn't always all that easy to distinguish between them. For one thing, there are two distinct variations of the SM2, the early one having raised areas on the spools cover, on top of where the spools sit, mimicking the spools flaps on the earlier Olympia portable. This similarity with the SM1 (aka Orbis) might alone be used to mark these out as SM2s. However, later SM2s also have the flat top, the same as the SM3. As well, there are earlier SM2s with the name badge on the paper plate and later ones with it on the front of the spools cover. So it can get quite confusing.
I had already planned to follow my post on Doug's SM2 with one about advertising for Olympia portables in the United States and Australia in the immediate post-war era and through the 1950s. In part I had used these ads to identify Doug's SM2, as well as online images of the SM2 and Leonhard Dingwerth's two-volume 2008 book on German typewriter manufacturers. Not that I could I say these sources gave me absolutely definitive answers. But looking through the ads and images does help identify some of the distinguishing features. 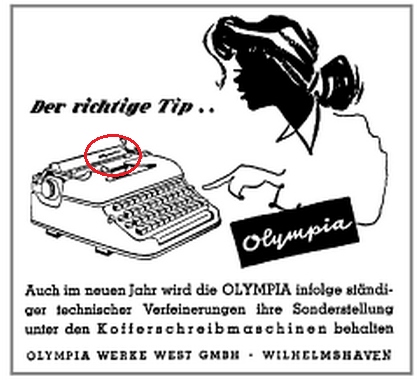 1952 advert
US adverts did not distinguish between models. In Australia, advertising code letters and numbers offered some hints, but only the "new model SM2" was identified from other models. These Australian "new model SM2" ads partially sorted out something that was a bit confusing in Dingwerth's book - which states in one part that the SM2 first appeared in 1950 and an updated version came out with the SM3 in 1952, and in another that the SM2 first came out in 1952. However, an advert for the flat-topped SM2 (with name badge on paper plate) appeared in the Sydney Morning Herald as early as October 1951: 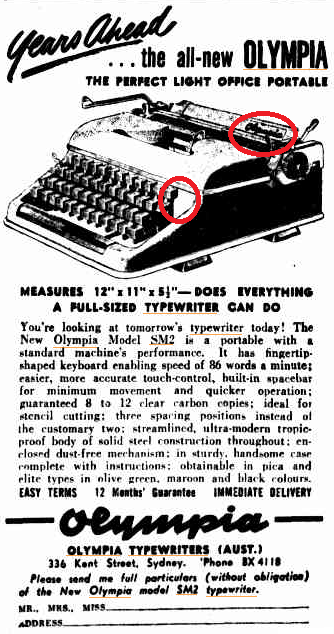 Below is a 1950 German advert for the (Olympia Werke West) Wilmelmshaven-made Olympia SM1, interestingly also with a flat top and name badge on the paper plate. Australian advertising, however, establishes another variation of the West German-made SM1-Orbis had the raised areas on the spools cover, as did the first SM2: 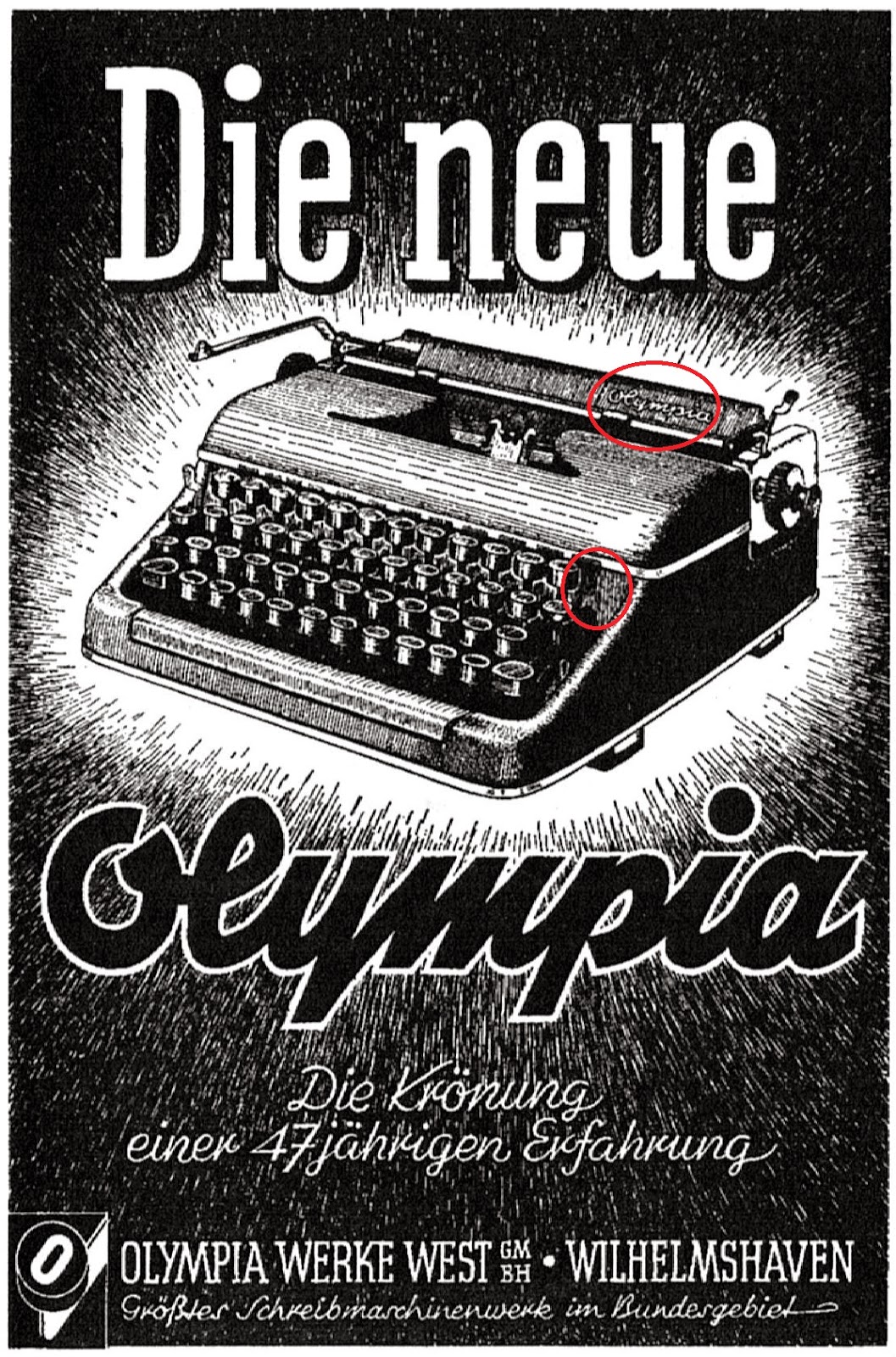 The two things that most interested me in this research into Olympia portable advertising in the US and Australia were:
1. That the first Olympia portable advertised for sale in Australia after World War II was the Plana made in Erfurt. This appeared in the Daily News in Perth, Western Australia, in November 1949, before the separation between Erfurt and Wilhelmshaven had been fully sorted out and two years before Wilhelmshaven had won the right to use the trade name Olympia (Erfurt adopted Optima).  So Australia was shipping in East German-made Olympias before it was able to market West German-made Olympias. I was surprised to find the Plana was even sold in this country. 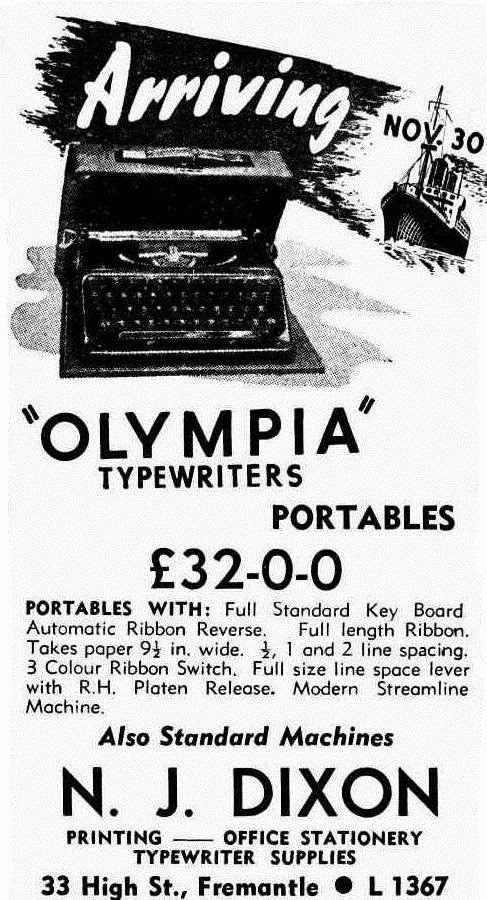 Machines from the West German company began to be advertised in earnest in 1950 with the establishment in this country of Olympia Typewriters, a division of Hedesan & Company in Sydney, set up to import goods from the reconstructed north-western section of Germany, including Büssing AG trucks and buses from Braunschweig. And this advertising was for the Olympia Orbis (the SM1 with the raised areas on the spools covers and name badge on the paper plate). Advertising codes identify this as an SM1:

These were sold in Melbourne up to March 1952, by John McCallum Trading. 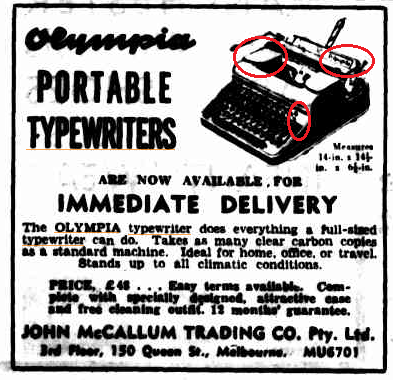 In 1954, advertising for all Olympia typewriters in Australia ground to a sudden halt, and didn't resume until 1963. In the interim, there simply wasn't an importing agency. What sold in the period from 1951 to 1954 was the SM2 and its "DeLuxe" version, the SM3 (each with the flat top and from 1954 with the name badge on the spools cover): 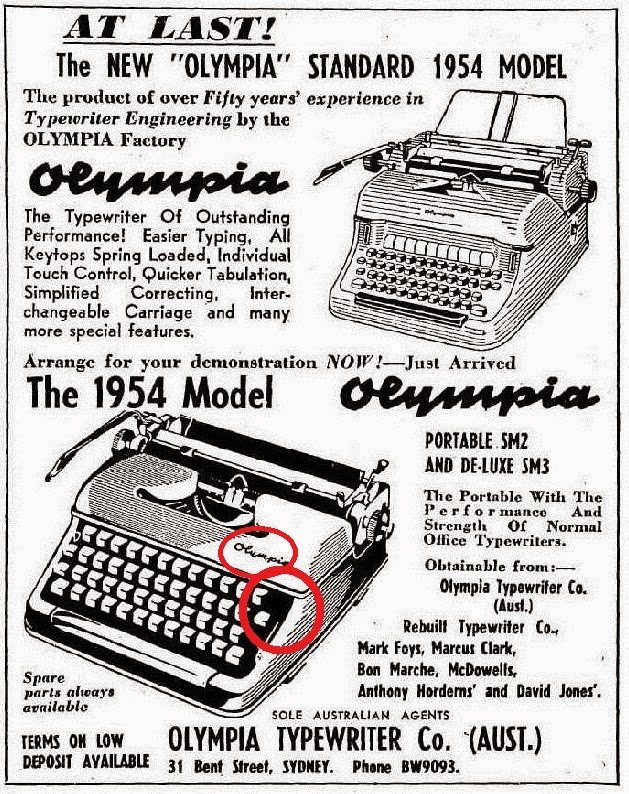 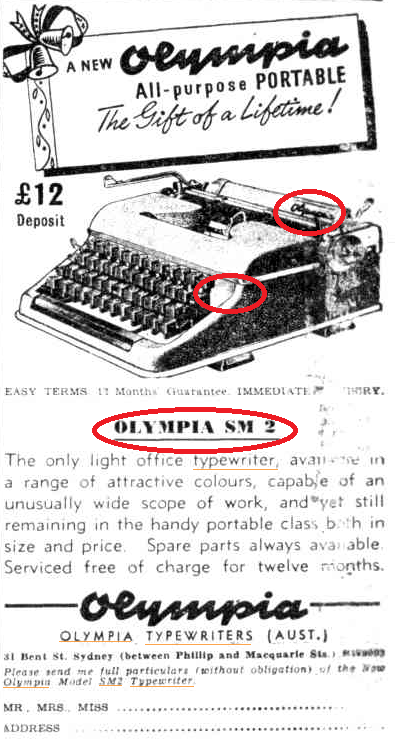 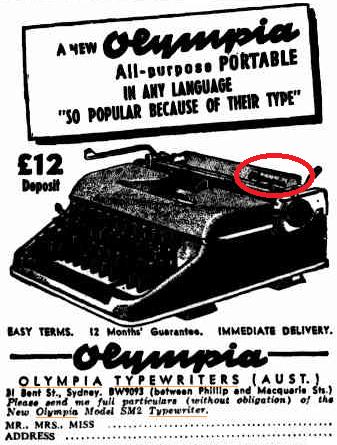 2. In the United States, for me the most fascinating aspect of Olympia typewriter advertising was the emphasis placed by some selling agents on the West German (Wilmelmshaven) manufacture - bearing in mind this was at the height of the Cold War.
In June 1945, Joachim Wussow had rolled up Olympia portable typewriter blueprints (with the notable exception of the Plana), packed them in his car with his family, and escaped the advancing Soviet army, which was about to take over control of the area around Erfurt. Wussow headed West, into American occupied Germany, and eventually in 1946 found a base in Wilhelmshaven. In May 1954 The Rotarian told some of his story: 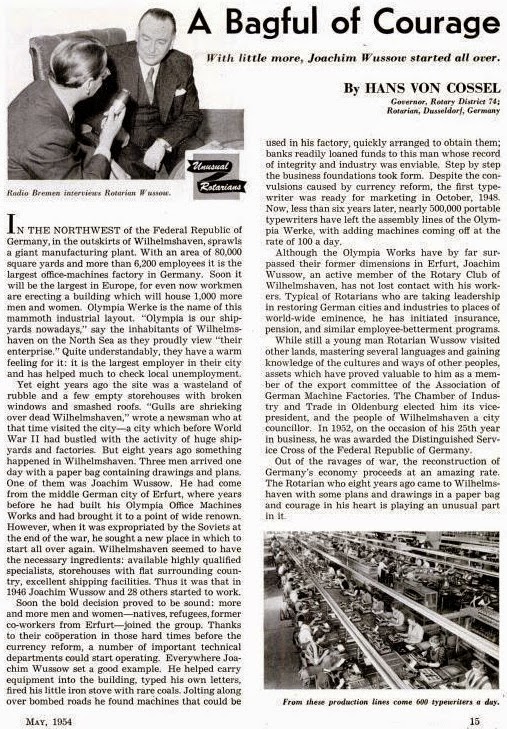 In 1958-59, at least one Olympia agent in the US felt this was something worth stressing ("Wussow Escapes Reds"): 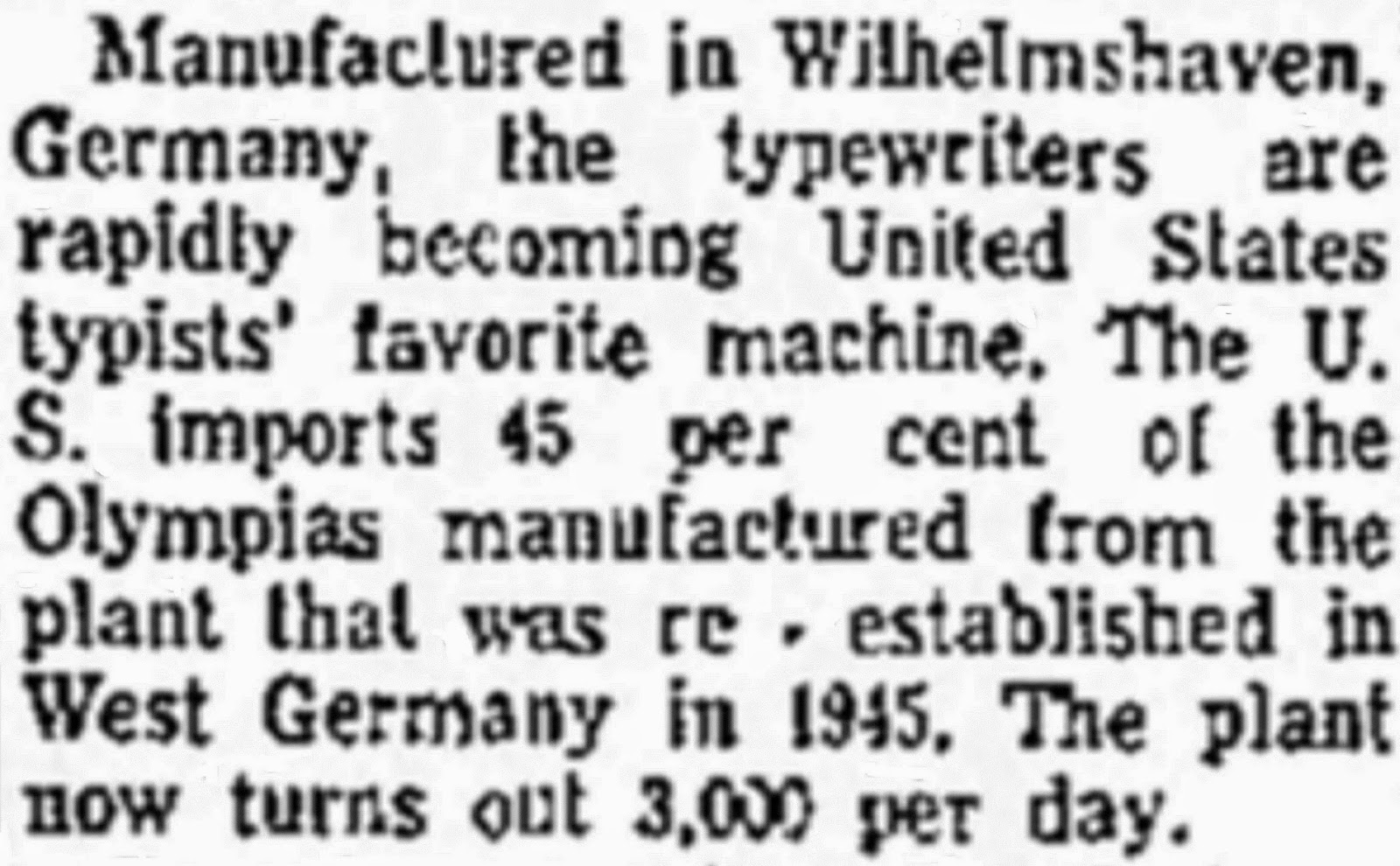 Olympia SM2 and SM3 portables (with name badges on the paper plate) weren't widely advertised in the US in the period 1951-52, when they were quite heavily advertised in Australia: 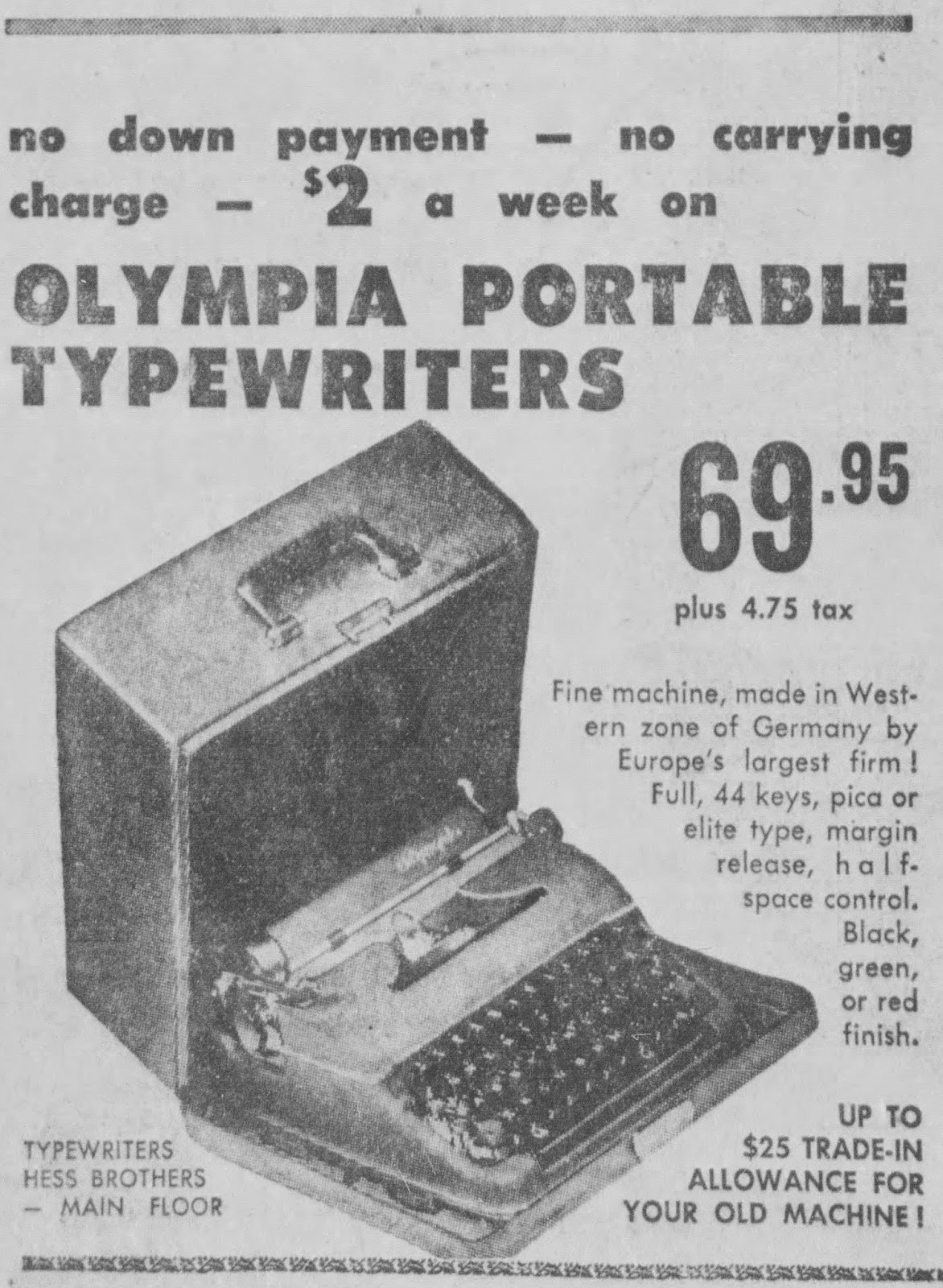 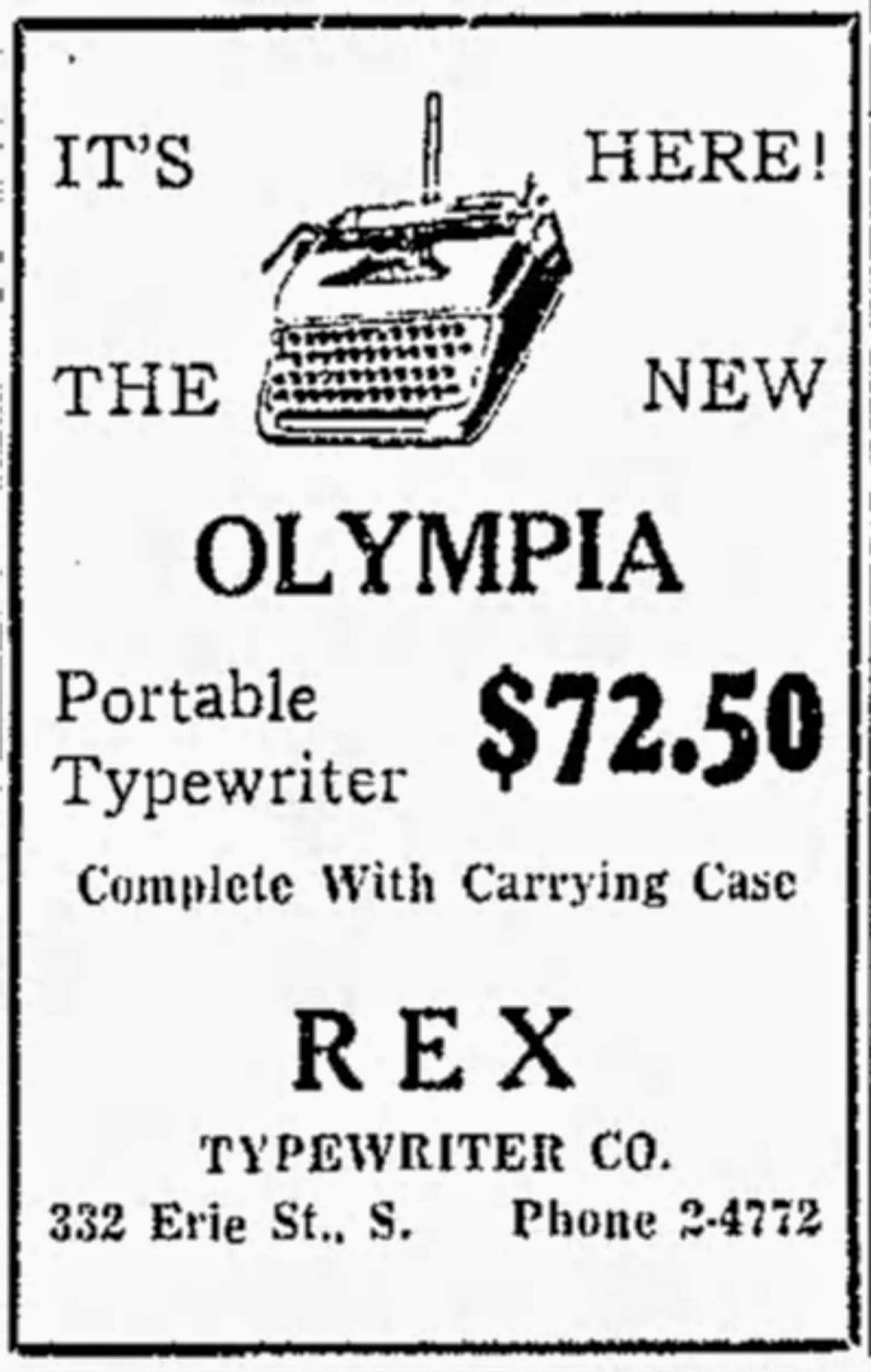 In 1957-58, however, US advertising picked up considerably - at the very time these models weren't being sold in Australia. One of the more interesting aspects of this late 50s campaign was the spotlight put on Olympia's cursive typeface: 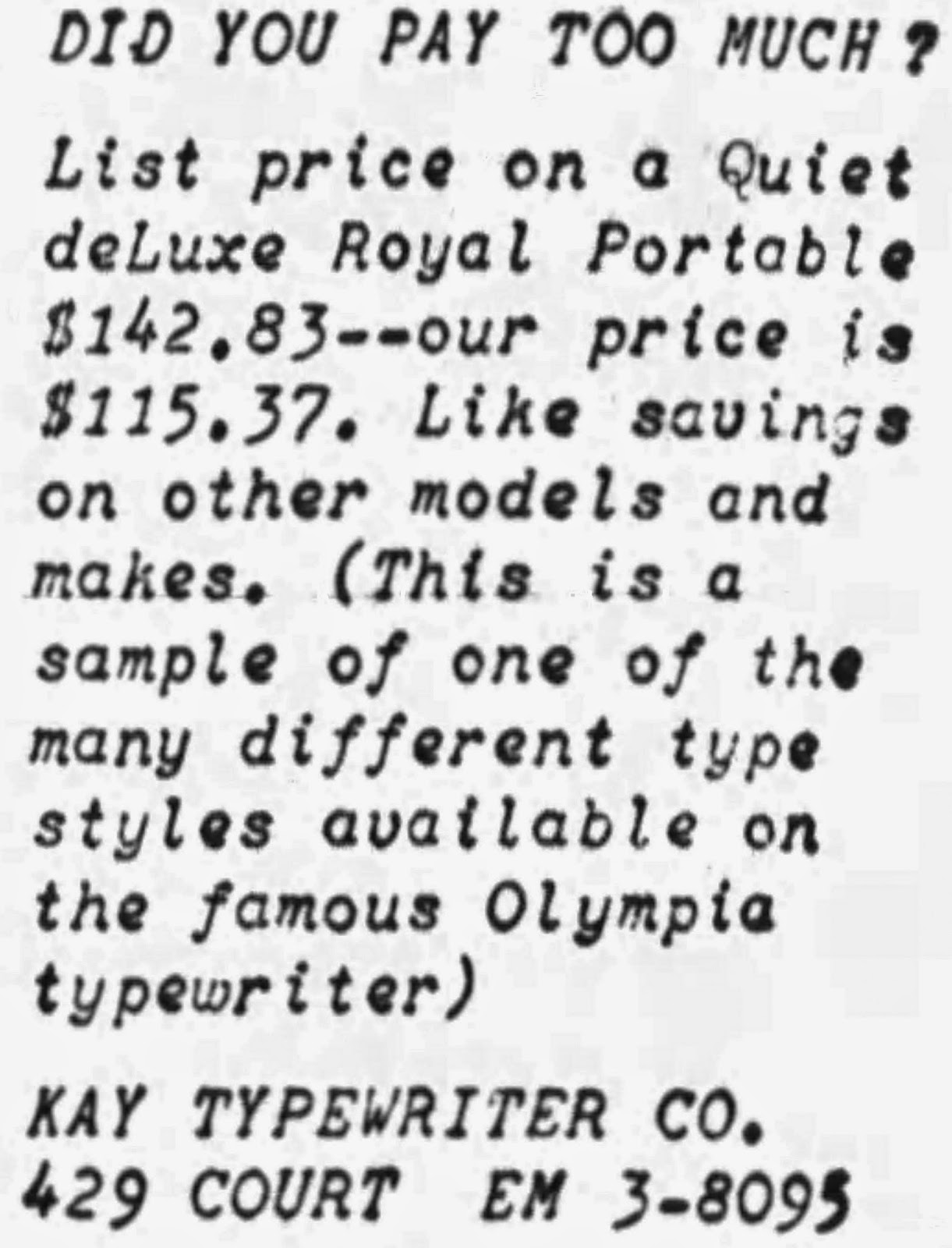 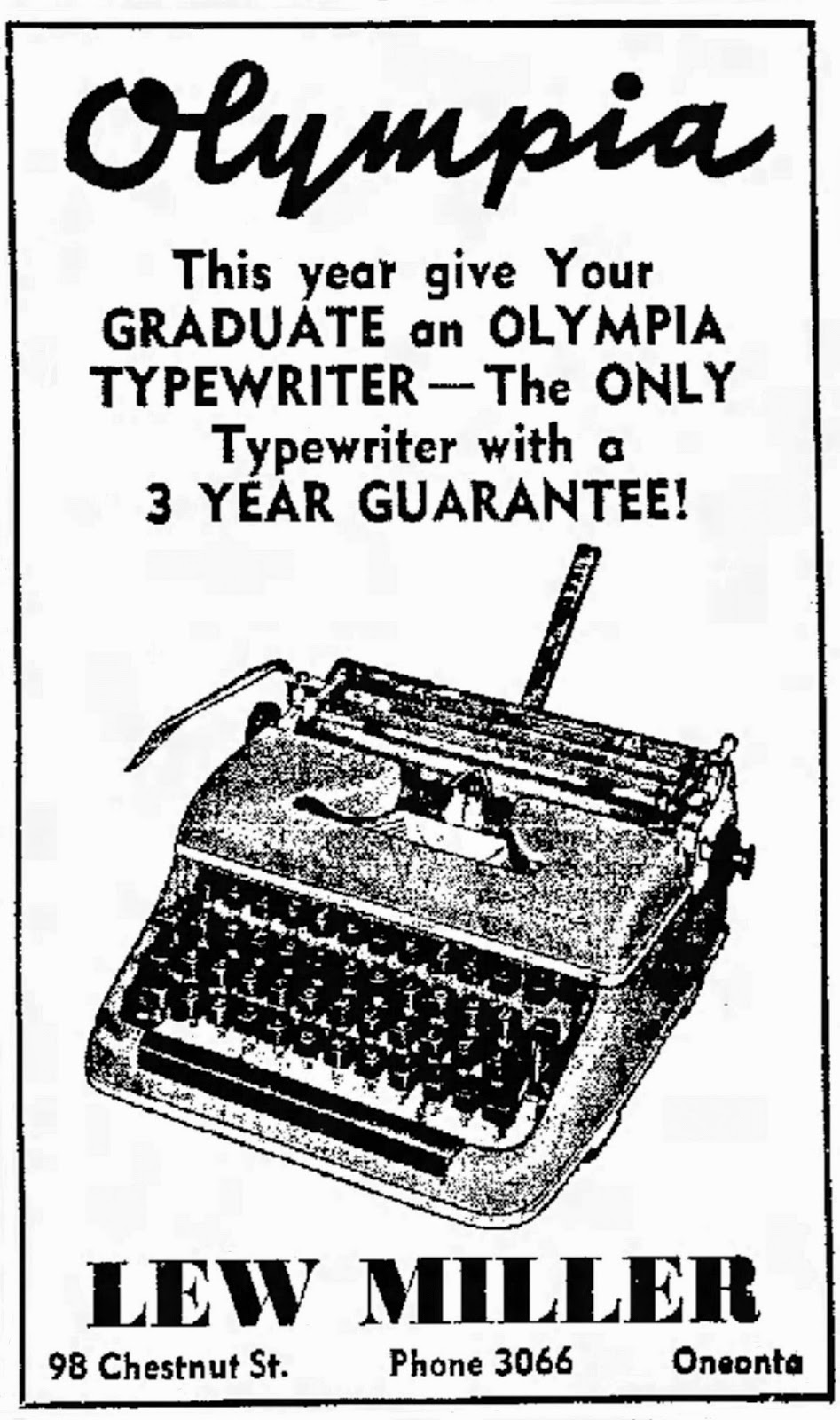 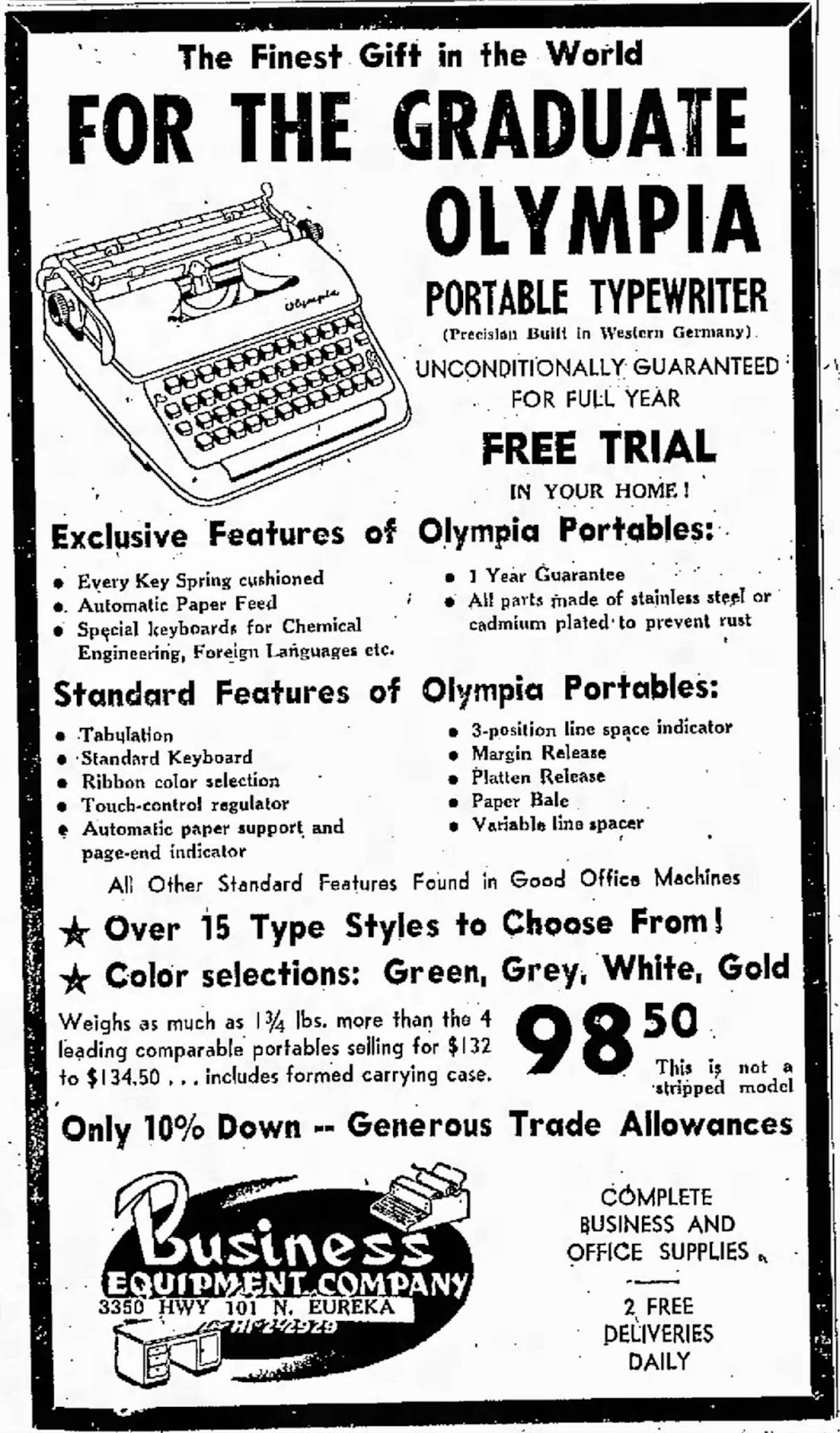 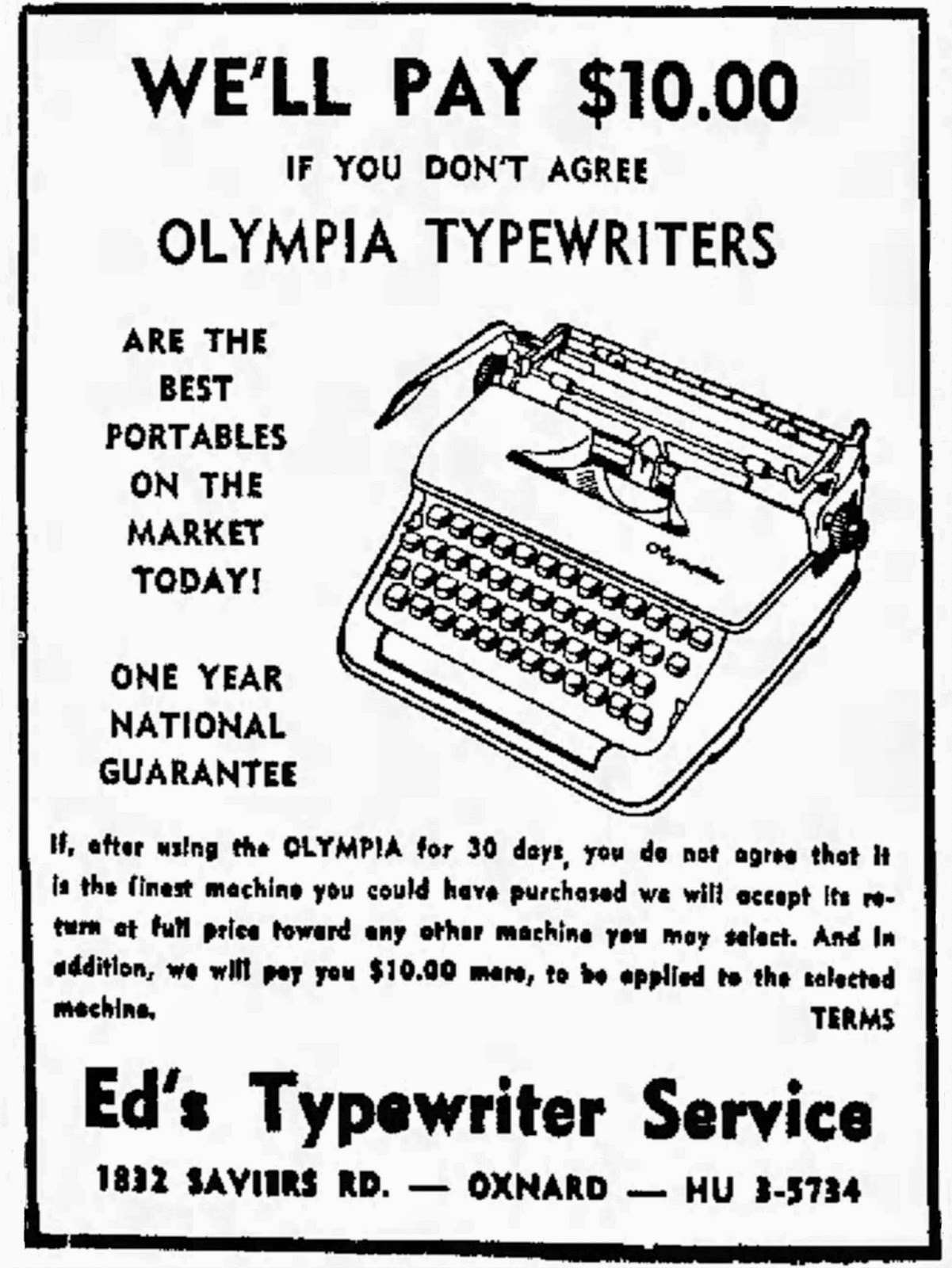 These images show some of the more noticeable differences between the later SM2 and the SM3 (according to Dingwerth, the SM4 emerged in 1958): 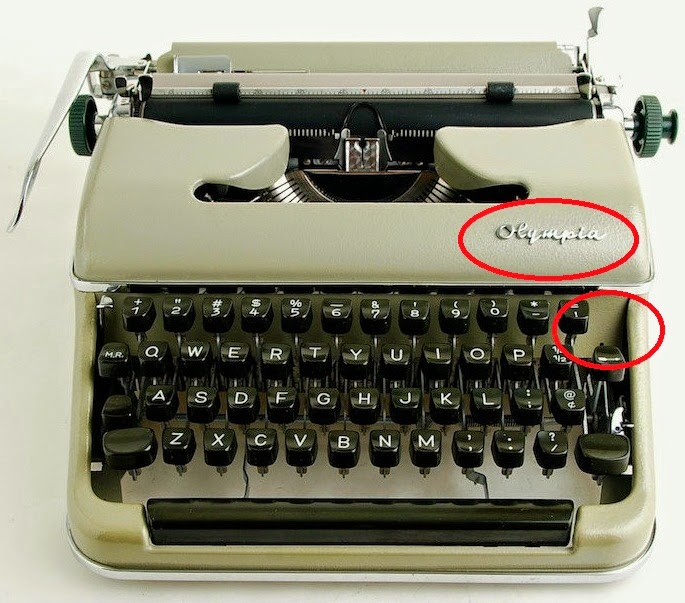 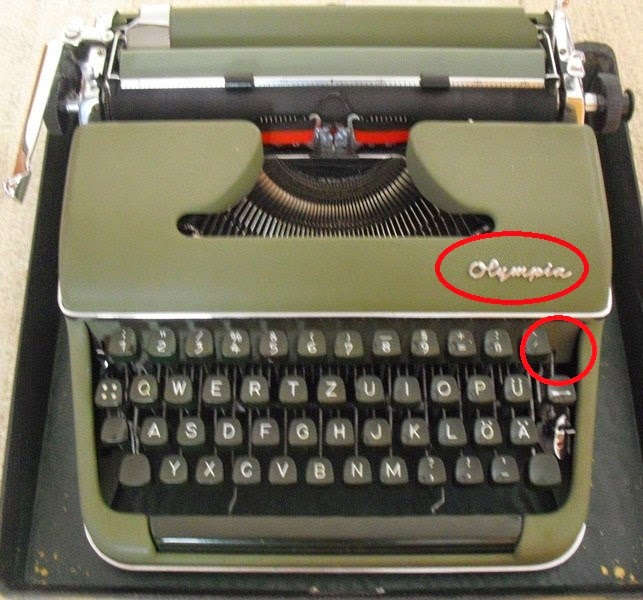 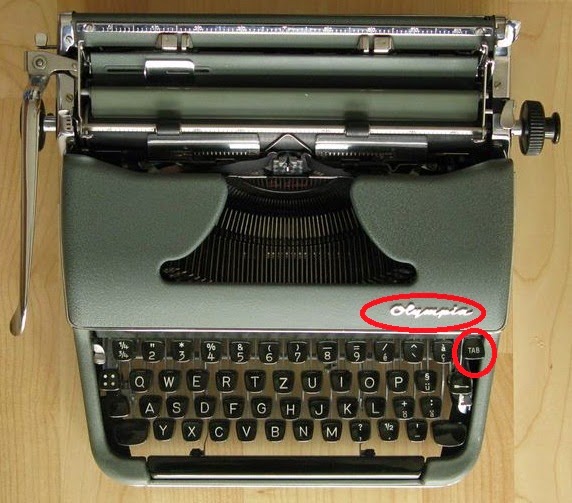 This, conversely, is the SM2 I bought at WordPlay in Cincinnati last year: 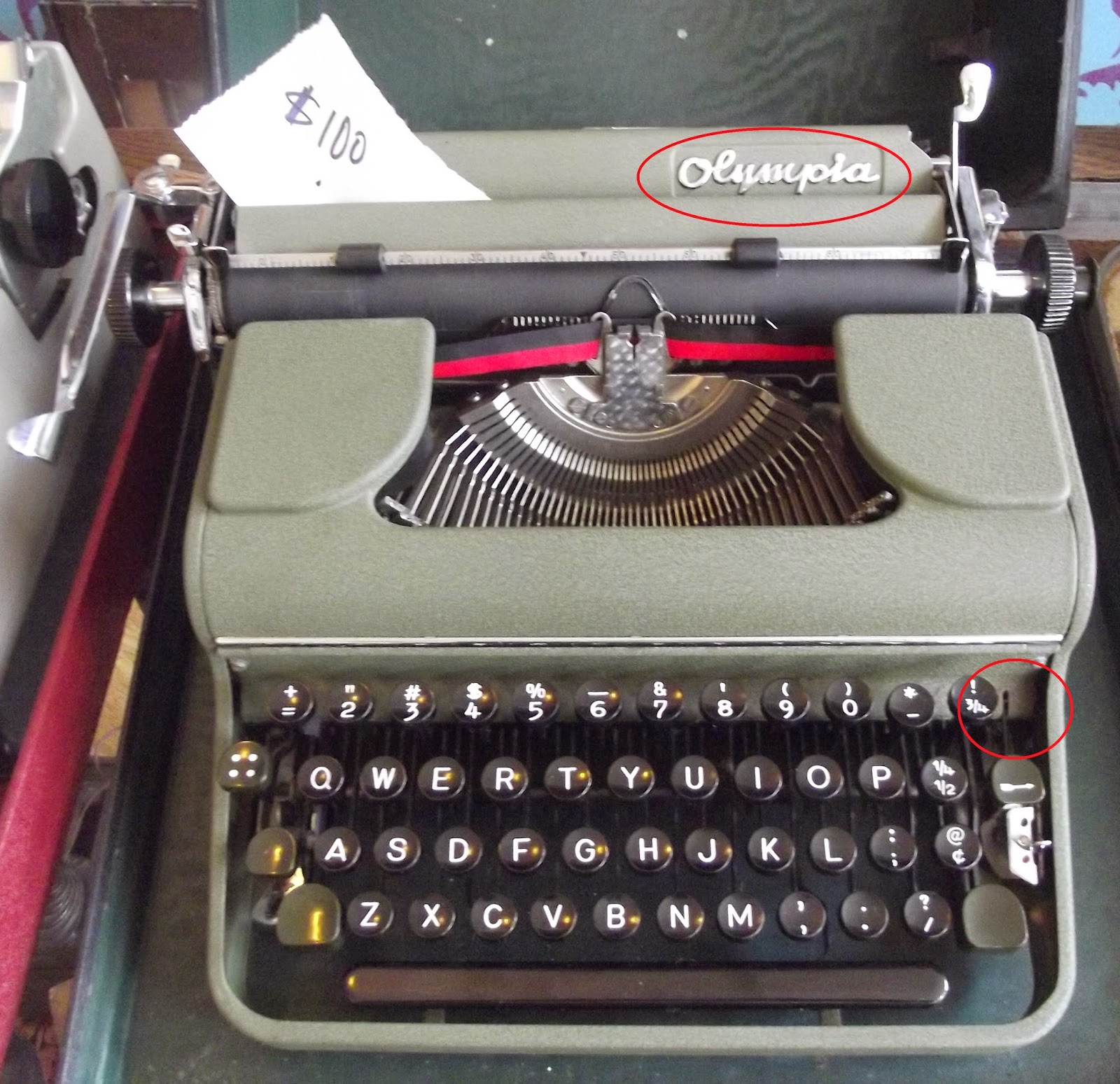 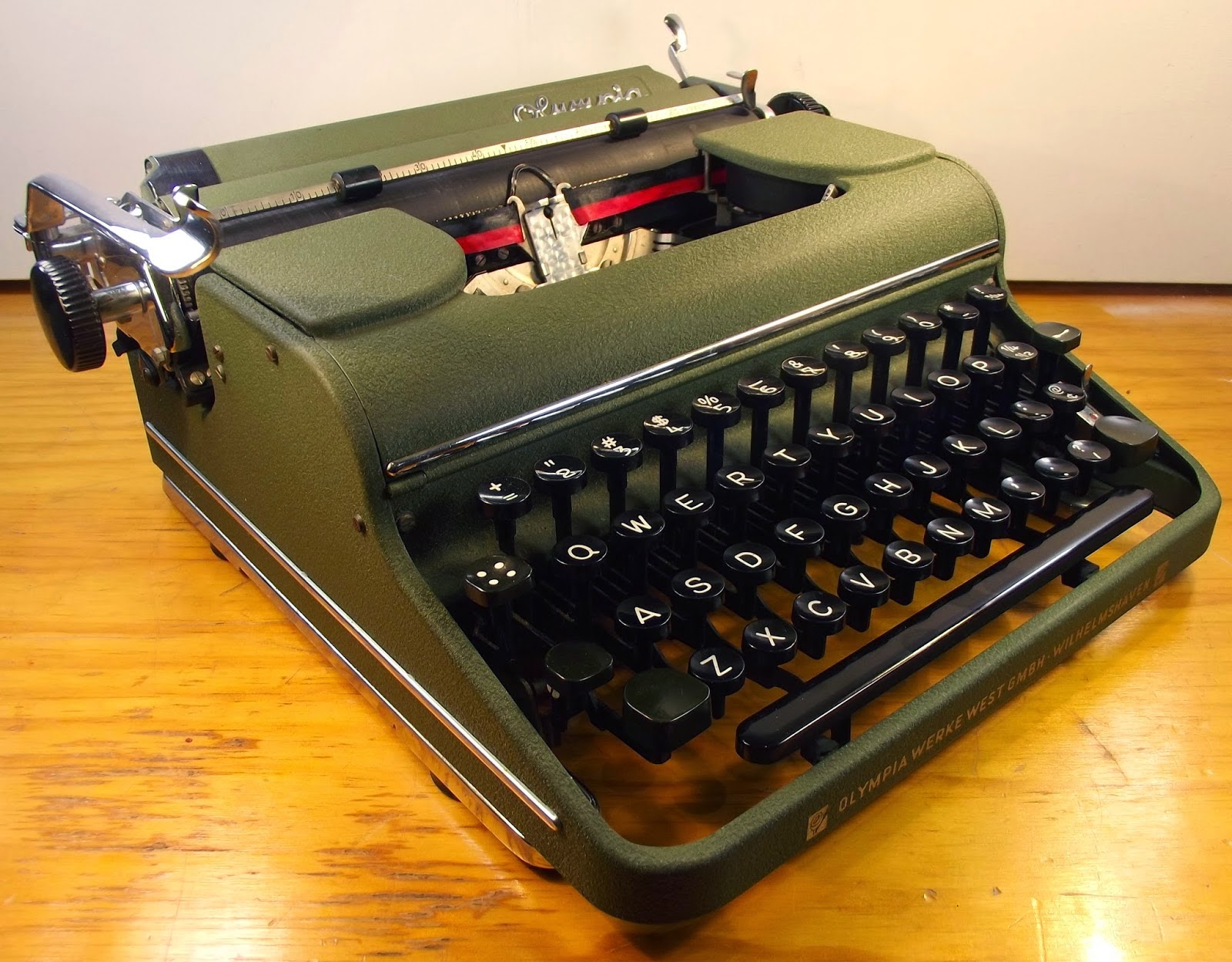 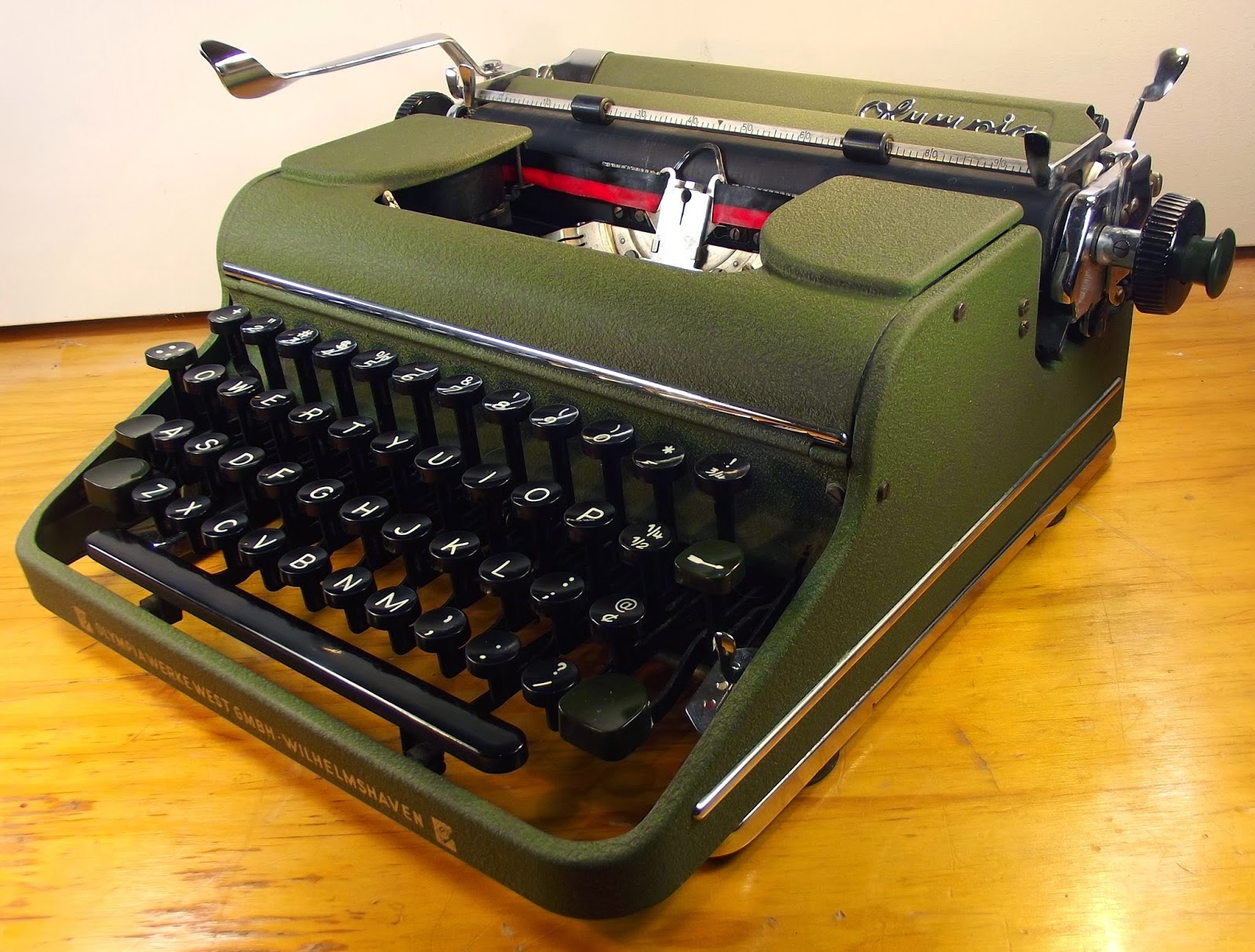 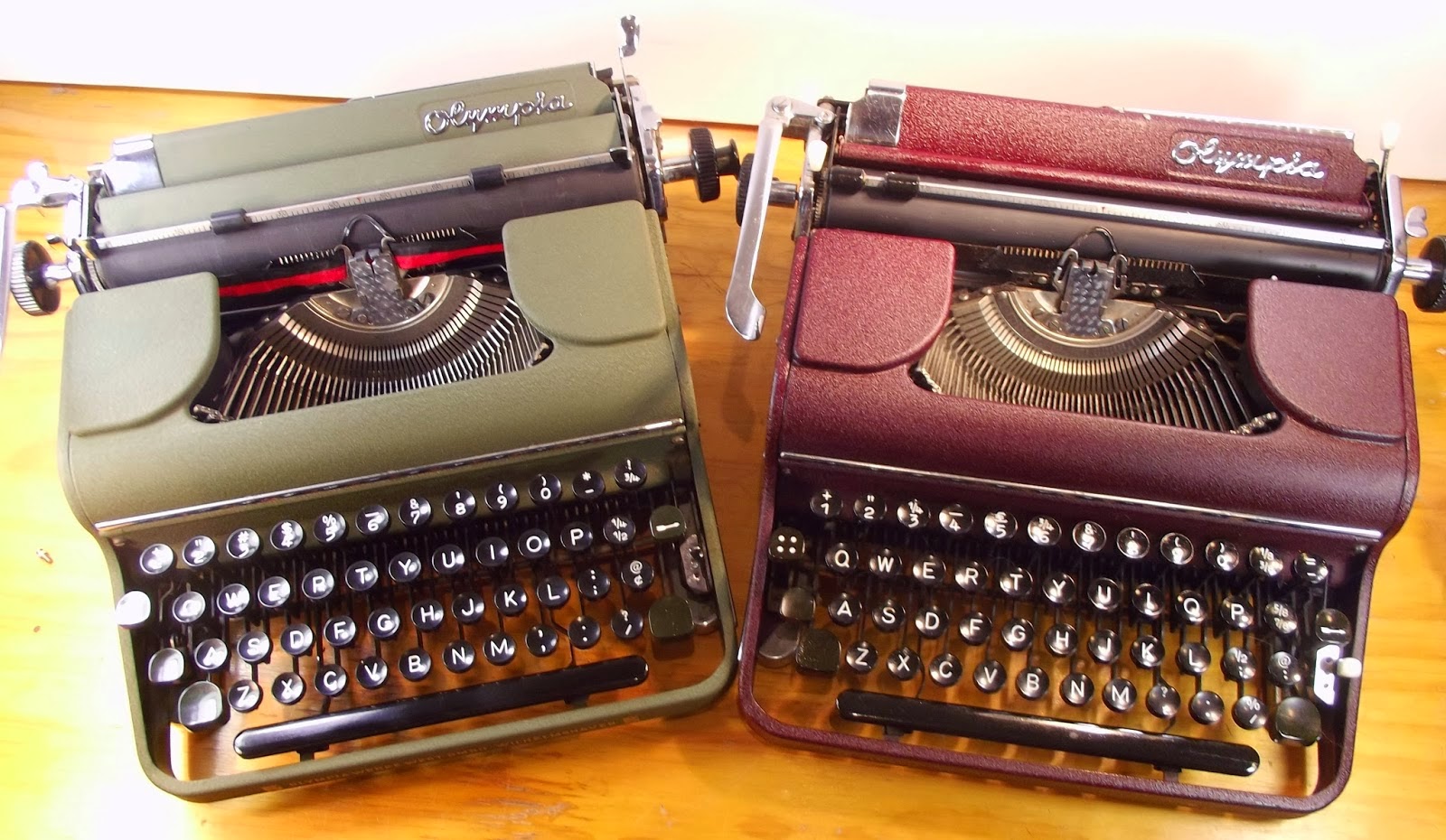 And here are later SM2s that I once owned: 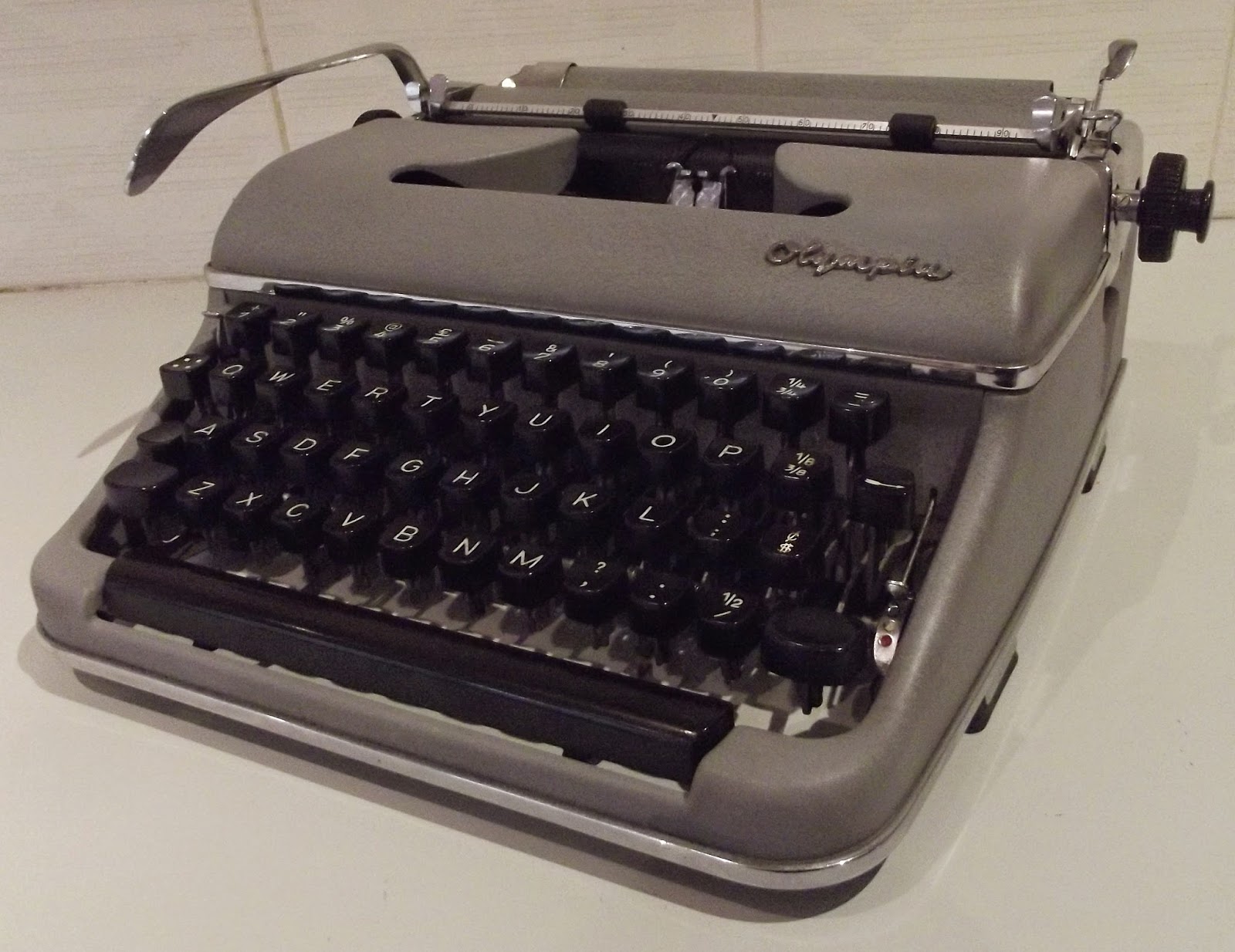 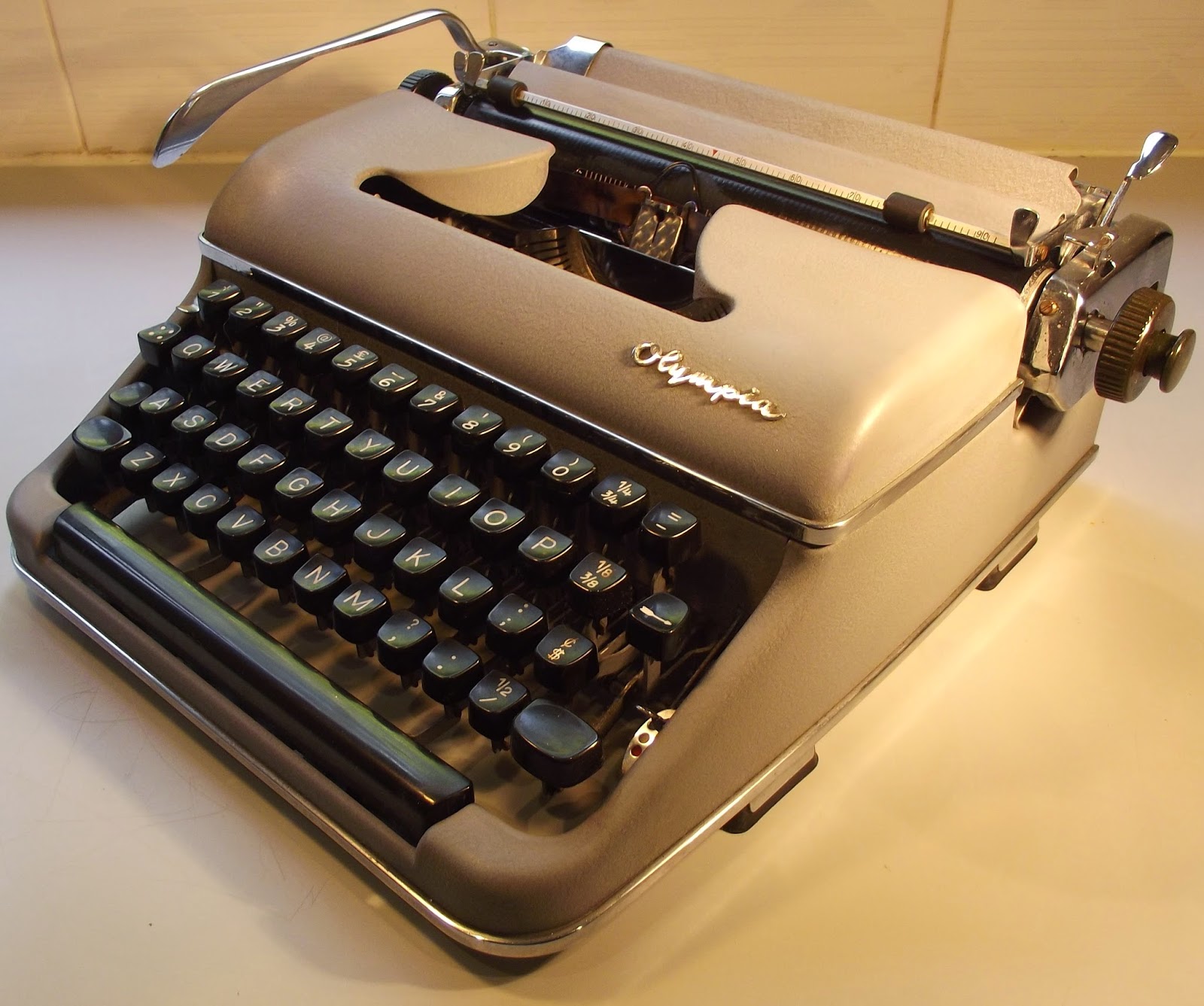 I readily admit that correctly identifying these models caused me much angst and confusion in the past.
Posted by Robert Messenger at 11:21

In 1951, a Portland, Oregon (USA) based typewriter dealer began selling the Olympia portable. However, there was a strange controversy that ensued: http://royaltypewriters.blogspot.com/2014/08/a-so-called-russian-typewriter-olympia.html

This post will be handy when researching some of my SM2 and SM3 typeweriters.

Thank you for setting me straight! From now on, I will simply look for the tab key, or absence thereof. I had it in my head that SM2's all looked like the one you bought at WordPlay.