Henri Emanuel Longini (1875-1929): The Longini 'typewriter', the Blickensderfer 3, the Dactyle and the Muldivo 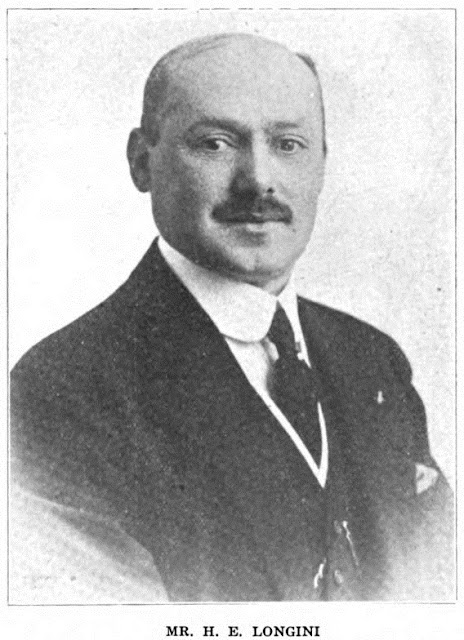 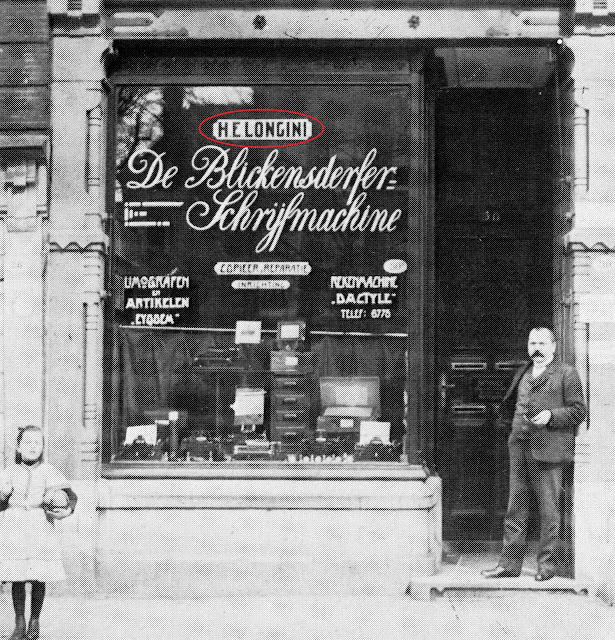 Henri Emanuel Longini standing outside his Dutch office, in Rotterdam, in about 1910. The image, kindly sent to me by Peter Weil, is from the book Vom Sektretär zur Sekretärin - Ein Austellung zur Geschicte der Schreibmaschiune und iher Bedeuting fur den Beruf der Frau im Buro (From Secretary to the Secretary - An Exhibition on the History of the Typewriter and its Importance for the Profession of the Woman in the Office), by Rolf Stümpel, Gutenberg Museum, Mainz, March 29-June 9, 1985, p63 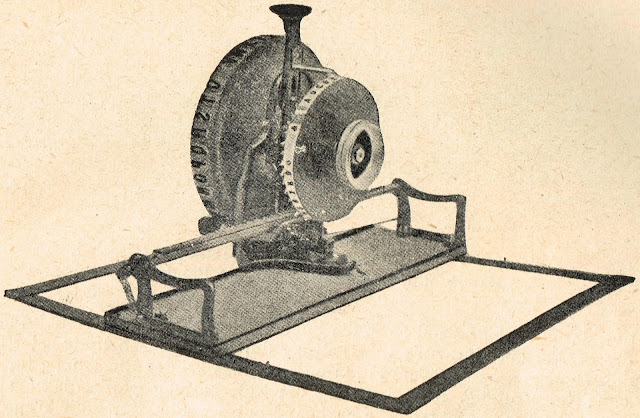 The Longini "typewriter", Belgium's first writing instrument, was invented by Henri Emanuel Longini and marketed by him in 1906. 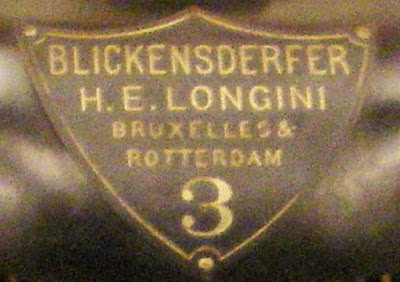 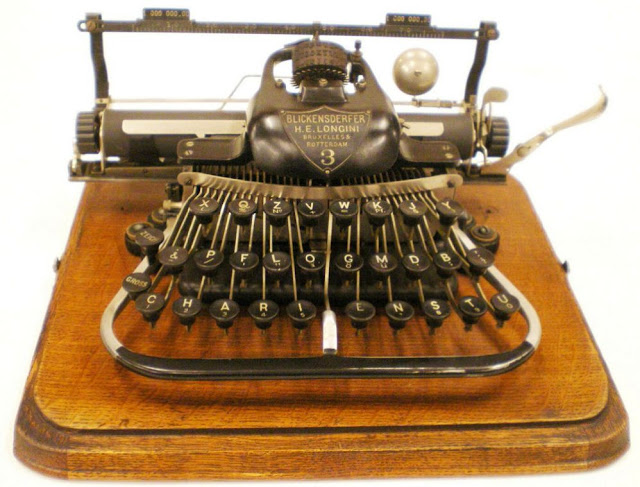 This machine is in Museon, The Hague
Longini marketed from Rotterdam in Holland and his headquarters in Brussels in Belgium rebadged Blickensderfer 7s,  as both wide-carriage and conventional width carriage Blickensderfer 3s. Longini's HQ was at 31 Rue des Croisades, Saint-Josse-ten-Noode. 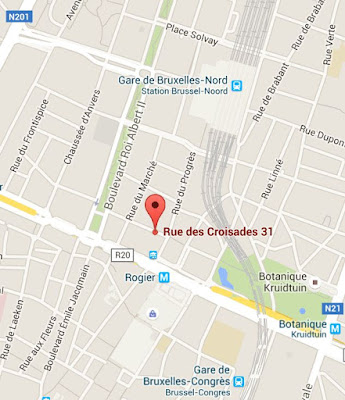 The conventional width carriage machine above has the serial number 135168 (1909). The wide-carriage version, below, was first seen on this blog almost three years ago now. 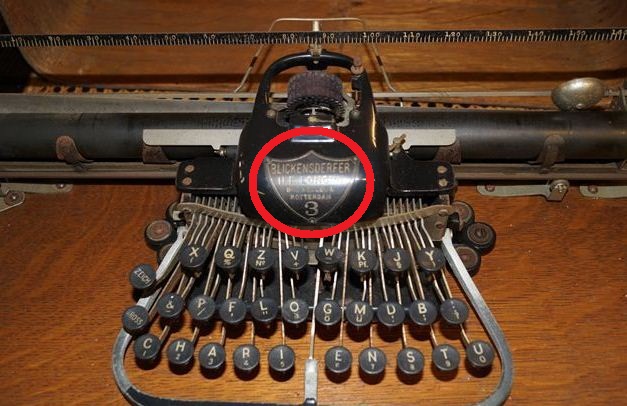 These add another Blick badge to those more commonly known, such as de Renzy and Reed's New Zealand Typewriter Company, Groyen & Richtmann of Solingen and Cologne, the Rimingtons at Cheapside in London and Newcastle-on-Tyne, Rochefort's Dactyle of Paris, and the Creelman brothers of Ontario; not forgetting, of course, Stamford, Connecticut. 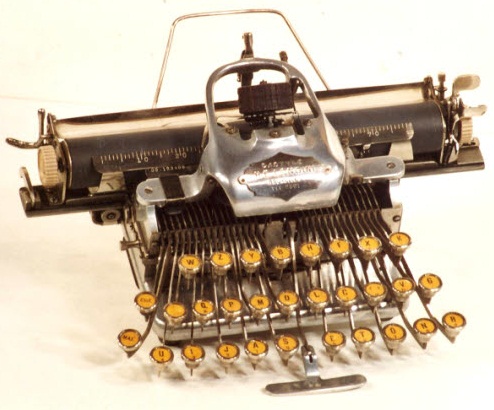 Yet another variation of the Blick badge is on this aluminium Dactyle Featherweight, serial number 170378 (1913), which has the H.E. Longini Bruxelles (Brussels, but apparently not Rotterdam as well) badge. This model was part of the late Tilman Elster's Collection. 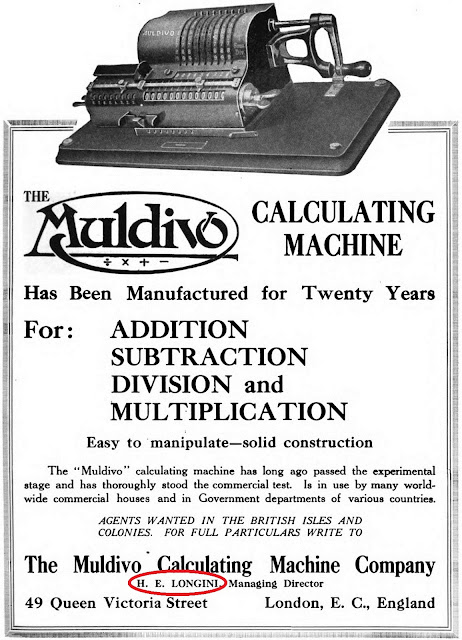 When World War I broke out in 1914, Henri Emanuel Longini, who was born in Strasbourg, then part of Germany, decided to leave his Belgium and Dutch office supply businesses in the hands of others and set up shop on London's "Typewriter Row", Queen Victoria Street. While he was in London, a brother ran his shorthand training school and, despite German occupation of Belgium, clandestinely taught more than 1000 Belgians to speak English.

Longini took over the Muldivo Calculating Machine Company, which had been established in the same London building in 1912 by Henri Ebstein, and did not return to Belgium until after the war ended in 1918. Ebstein was born in Wintzenheim on May 1, 1881. The family changed its name to Easton in 1938. Henri Easton died in London on April 18, 1963.
Having first employed Oswald Jahn as his representative in Rotterdam, in 1915 Longini replaced the deceased Jahn with J.A. Ressing, of Dinxperlo, right on the German border, as his general agent in Holland. 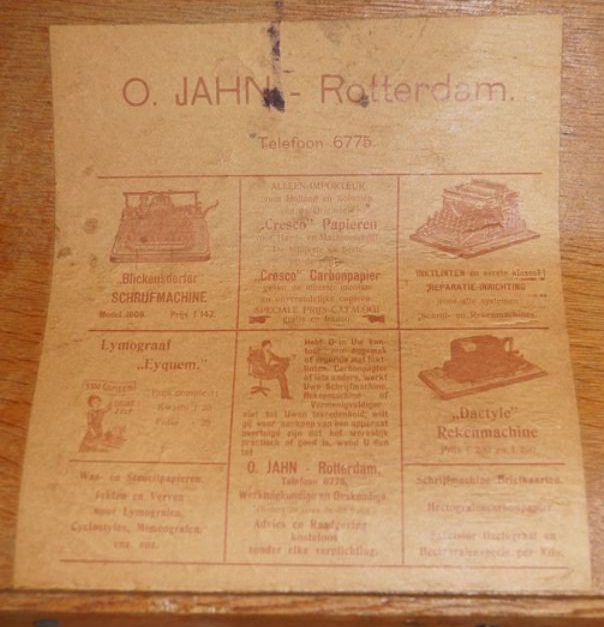 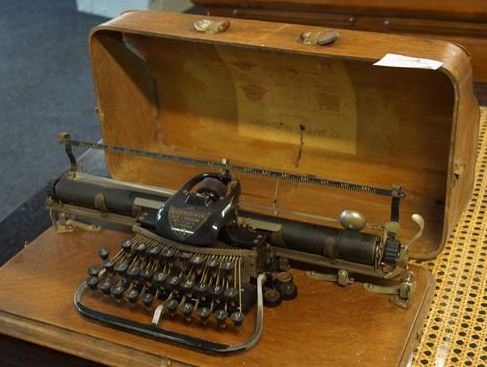 Longini was born on September 14, 1875, and his first career was as a skilled young lithographer in his native Strasbourg. In 1871 this city had become part of the new German Empire as an outcome of the Franco-Prussian War and the Siege of Strasbourg. In 1919, following the Treaty of Versailles, the city was annexed by France.
In the mid 1890s Longini moved to Saint-Josse-ten-Noode in Brussels, where he initially worked as a trade clerk (on February 26, 1904, he was declared a Belgium citizen). Longini entered the office supply business in 1897, aged 22. One of his first agency deals was for the German-made Brunsviga calculating machine, manufactured by sewing machine makers Grimme, Natalis and Company AG of Braunschweig. 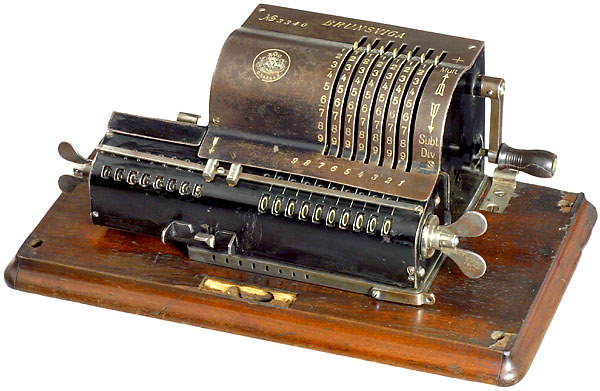 In March 1892 GNC won the licensing rights for Germany, Belgium and Switzerland for Willgodt Theophil Odhner's calculating machine, at a cost of 10,000 marks plus 10 marks a machine. The first Brunsviga machine was delivered in July 1892 for 150 marks, It was exhibited at the 1893 World's Fair in Chicago, where the Blickensderfer typewriter also made its debut. 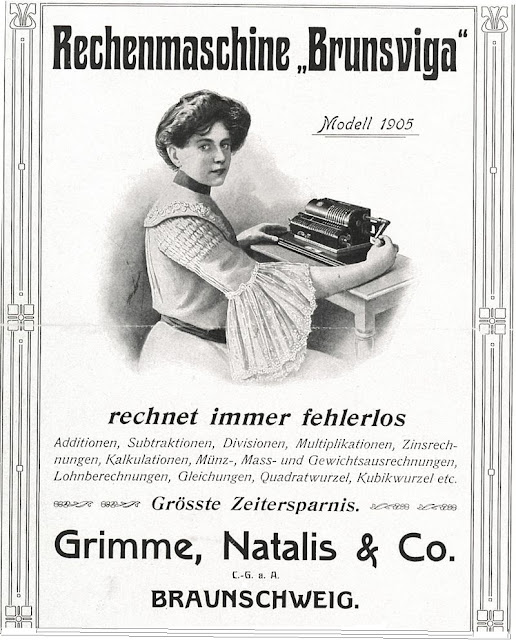 Longini was one of those agents who had to undergo a six-week training course on the use and servicing of the Brunsviga at the Braunschweig plant. But at 31 Rue des Croisades, Saint-Josse-ten-Noode in Brussels he also sold typewriters, duplicators, adding machines, ribbons, carbon papers and steel office furniture. As well, Longini founded the Belgium Stenographers' Association, of which he became president, and in 1922 wrote a manual based on the Prévost-Delaunay shorthand system.
He first came to prominence in the typewriter industry with his "Longini typewriter", which was, according to Typewriter Topics, "not exactly a typewriter in the present acceptance of the term, [though it] was a writing machine. It was not designed for correspondence, but intended instead for the writing of signs and placards in extra large letters by mechanical means. The machine wrote only capitals and the impression was accomplished through use of a large and upright typewheel. The card was slipped beneath, the wheel turned by means of a knob with the left hand, and the printing done by pressure on a single key at the top. The Longini would write on paper, wood, cardboard or metal. It sold at a reasonable price ... Even though not a typewriter in the popular sense, it can be said to be the first writing instrument made in Belgium." Wim Van Rompuy says the Longini (he calls it "Miss België") used two ink rollers and exchangeable type.
The Longini was not, it seems, a success, and the next year, 1907, Longini invented an improved printing adding machine. He had previously, in late 1905, patented in Germany an adding machine "with pusher (or slide) drive" (DE 184 719). Perhaps stung, or financially handicapped by the failure of his "typewriter", Longini decided against attempting to manufacture and market the adding machines himself, but immediately sold the rights to them to Grimme, Natalis and Company AG. 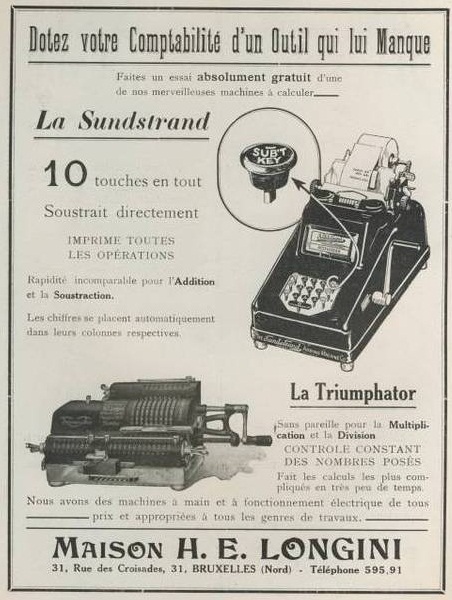 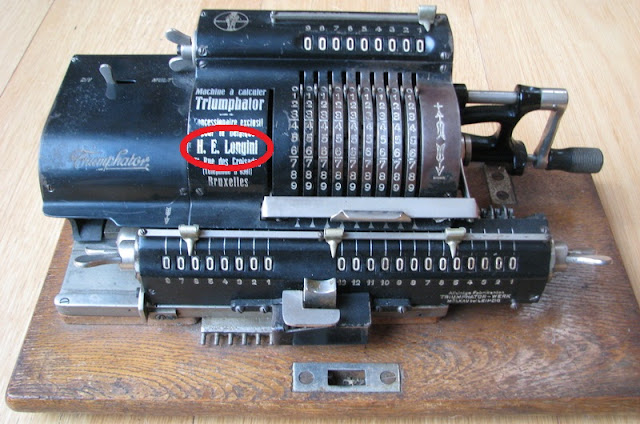 From his move to London until his death on September 6, 1929, just a week before his 54th birthday, Longini concentrated his efforts on calculating machines. By the time he took over the Muldivo business, he had been intimate with the basics of this machine for 18 years. Apart from the Muldivo, he also sold a range of other brands and machines, including  the Astra and Triumphator, the Sundstrand and Barrett adding machines, the Addressograph and Ditto, the Victoria copying machine and the Rotaprint, and Woodstock typewriters. The calculators, such as the Muldivo and Triumphator, were all pretty much clones of Odhner's original 1893 design. 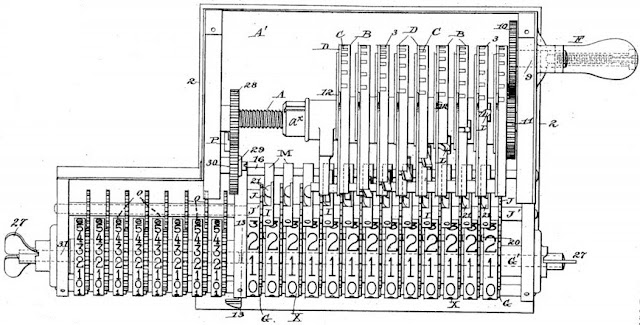 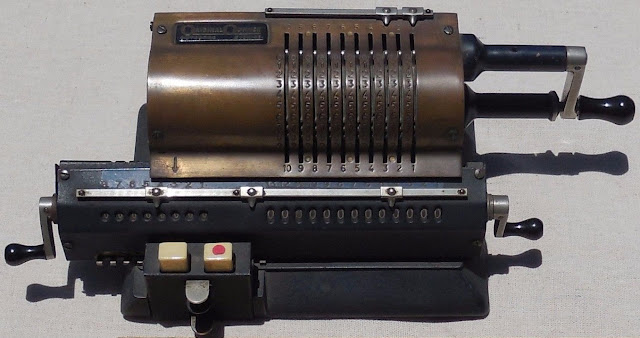 Odhner (1845-1905), a St Petersburg-based Swedish engineer (he was born in Dalby, Värmland), invented the Arithmometer, a hugely successful portable mechanical calculator, before selling the Germany, Belgium and Switzerland rights to Brunsviga. 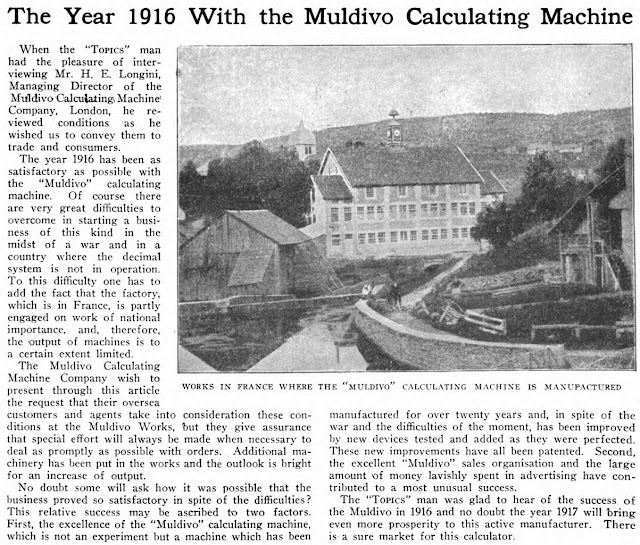 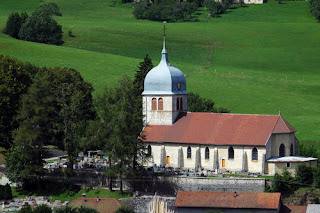 As it is today
The Muldivo company Longini took over in London initially had its pinwheel machines made in Foncine-le-Haut in the Jura district, on the Swiss border in eastern France. The owners of the factory were the Chateau Brothers [Chateau Freres] of Paris. 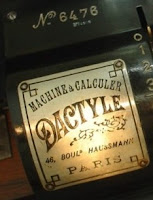 In France, this machine took the same brand name as the Blickensderfer typewriter, the Dactyle. Both this and the Muldivo were brand variations of German Brunsviga machines. 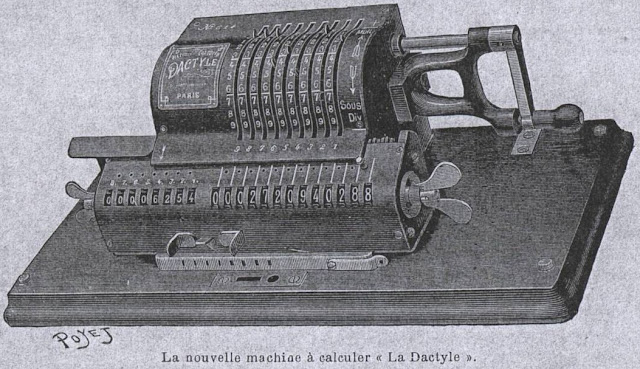 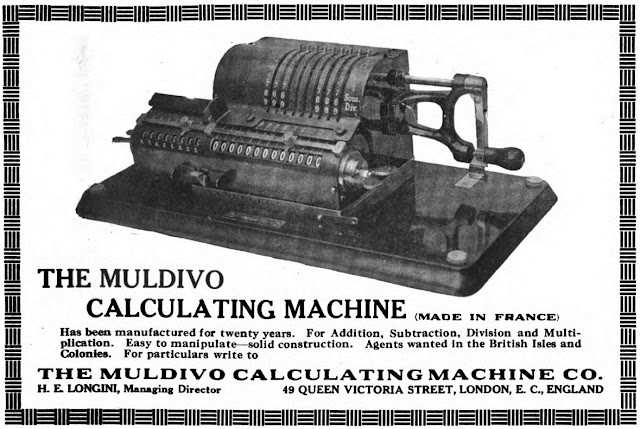 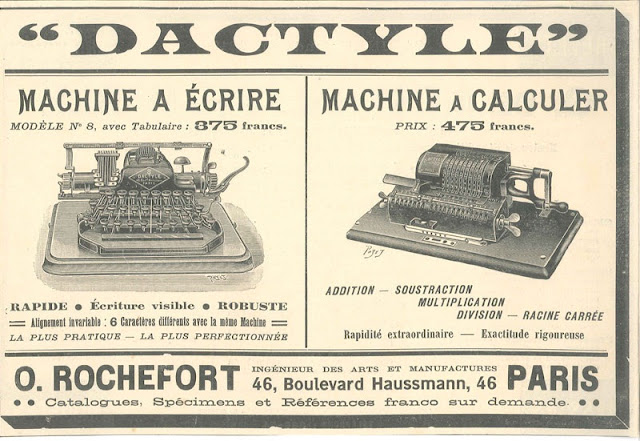 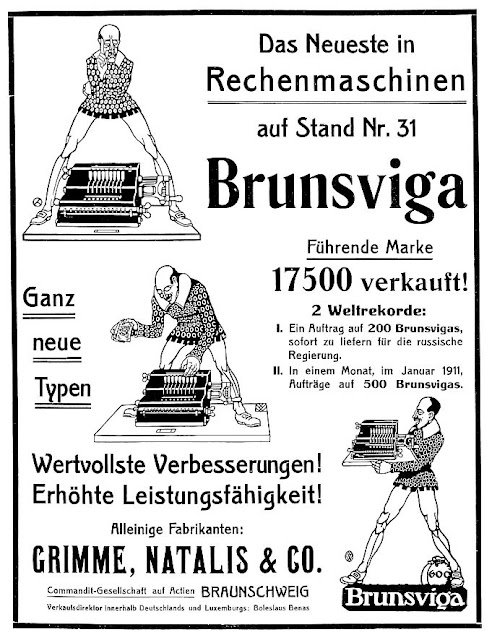 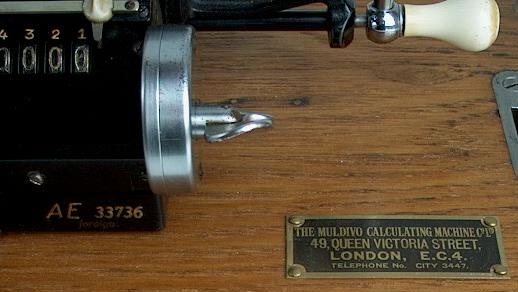 Muldivo was also the distributor of the Britannic model made by Guy's Calculating Machines and in 1939 Muldivo took over the Guy brothers. 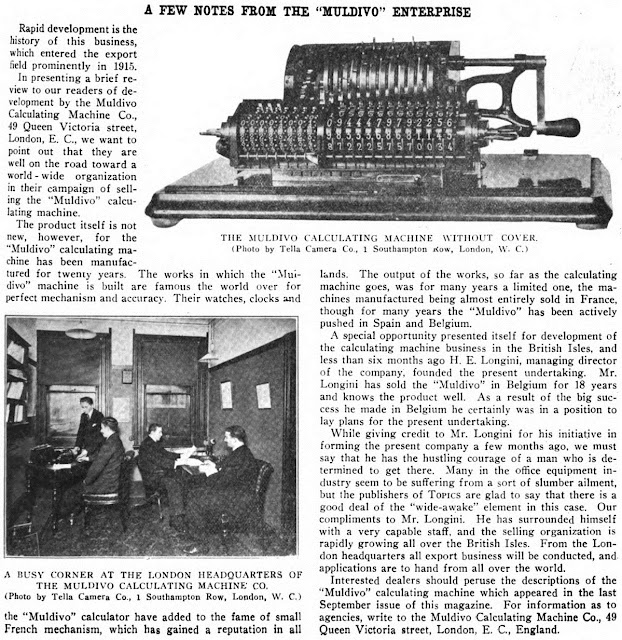 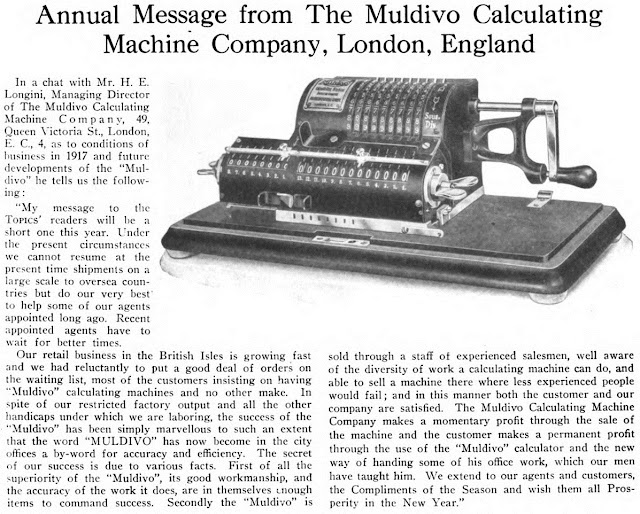 Posted by Robert Messenger at 16:02

More great research. Being an ignoramus about Belgian technology, I was not aware of Longini's invention, which reminds me of the Dart Marking Machine. I wonder whether any have survived.