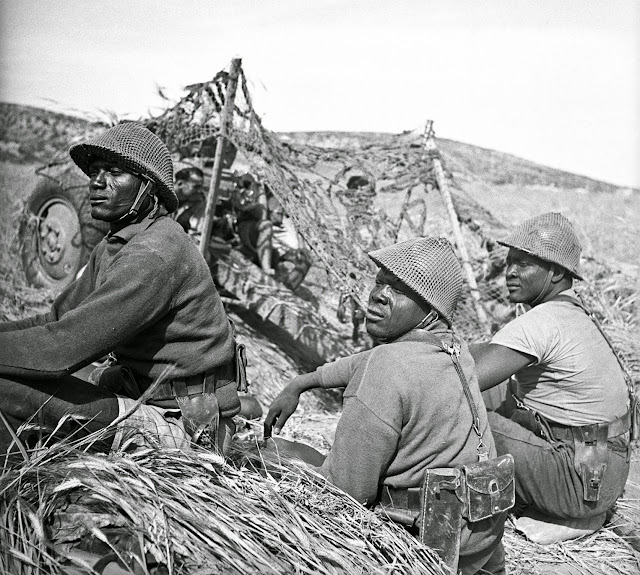 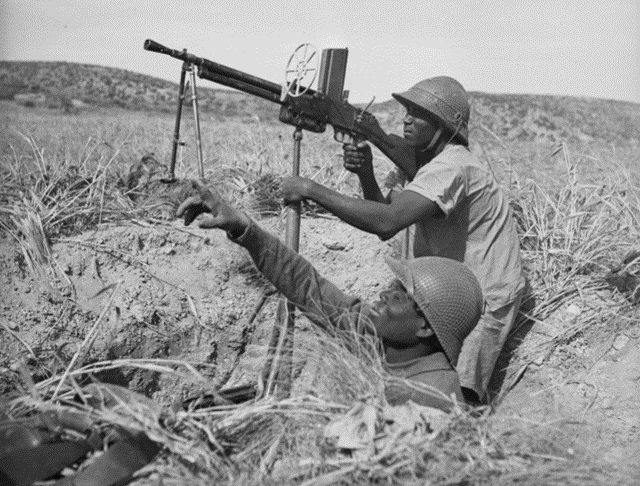 These photographs were taken by New Zealand World War II cameraman Mervyn Daniel Elias toward the end of the Battle of Tunisia in May 1943. They show so-called tirailleurs sénégalais fighting against the invading armies of fascist Germany and Italy, on the side of the Free France Forces in a predominantly Sunni Muslim country. The tirailleurs sénégalais are also mainly Sunni Muslim. As well as in North Africa, the Senegalese fought for France and for freedom in Europe. During the Battle of France, the Senegalese and other African tirailleur units served with distinction at Gien, Bourges and Buzancais. The Senegalese saw extensive service in Italy and Corsica during 1944, as well as in the liberation of southern France. The world has been turned on its head since then. 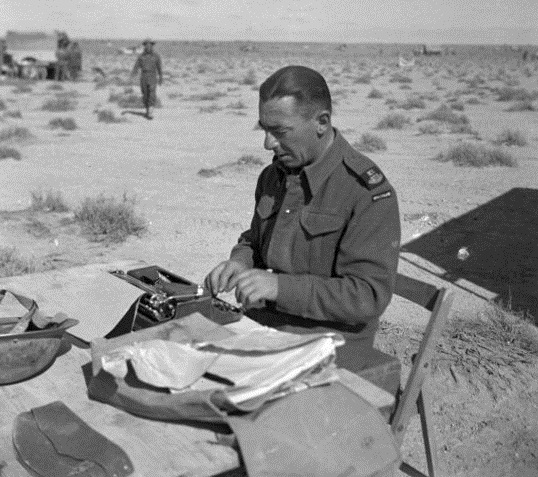 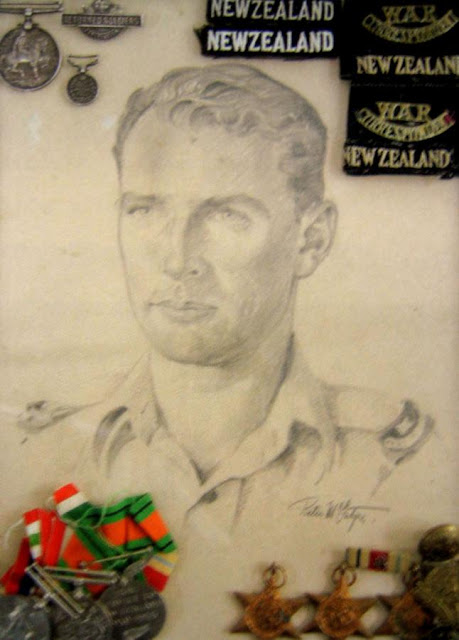 Drawing of Merv Elias by fellow New Zealander,
Dunedin-born war artist Peter McIntyre (1910-1995).
McIntyre served as a gunner in Egypt before being commissioned
Official War Artist, and in this capacity he served
in Greece, Crete, North Africa and Italy.
My post yesterday on "legendary" Californian war correspondent Tom Treanor (thanks Richard P, Bill M and Joe V for the positive comments) grew out of a plea for help last week for information about a New Zealand war photographer and movie cameraman called Mervyn Daniel Elias. 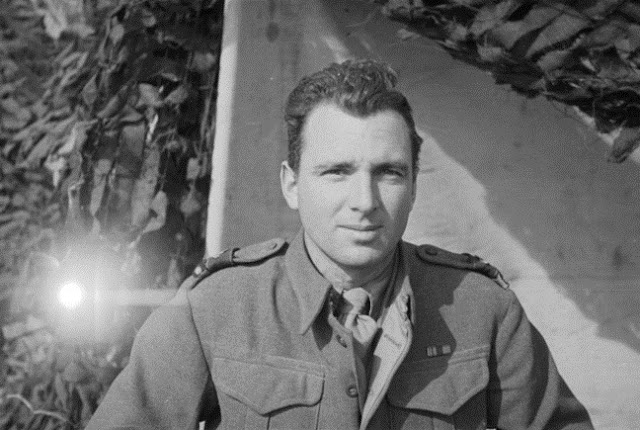 Merv Elias
I posted first on Treanor because, having stumbled across him during my research into Elias, I was astounded by how little was known about this great American journalist. There's acres out there about the like of Ernie Pyle (justifiably), yet not much about so many other "soldiers of the press". It seems Treanor was "legendary" at the time he died, aged 35 in August 1944, but the legend obviously didn't last very long. By one of those weird coincidences which, happily, seem to happen to me regularly, I was equally surprised to find after posting on Treanor yesterday that a book, Dying for the News: Honoring Tom Treanor and Other Reporters Killed Covering World War II, by Washington DC author and former TIME-LIFE Middle East and Europe reporter Gary G. Yerkey, was published just a month ago. Great minds, as they say ... 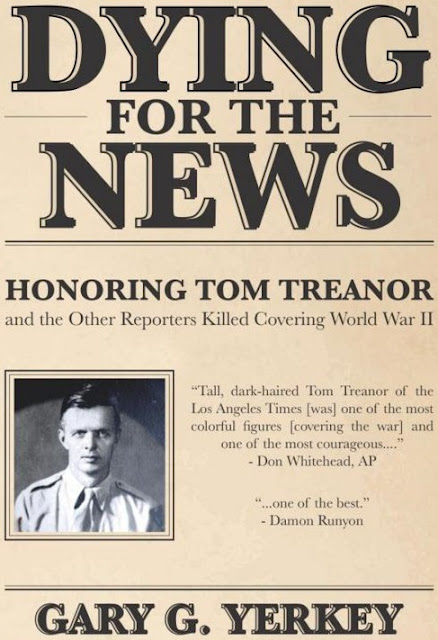 Anyway, what led me to Treanor in the first place - on the 97th anniversary of Remembrance Day, November 11 - was the online scan of his own wonderful book, One Damned Thing After Another. 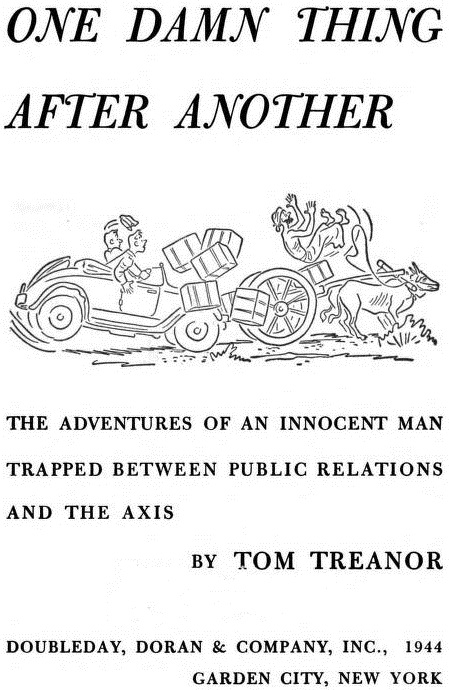 Treanor's introduction to One Damn Thing starts with the American correspondent paying a glowing tribute to Merv Elias. What does appear elsewhere online about Treanor in some cases refers to the assistance he received in Egypt from New Zealanders, but none of it specifically identifies Elias. Treanor himself made no secret of his indebtedness to Elias. What made his story all the more appealing to me was Treanor's regaling of Elias' experiences in the bar of Shepheard's Hotel in Cairo. Since this is a bar in which I too have had a beer or two (indeed, at Christmas 1978 I drank the place dry of Guinness Foreign Extra Stout - all I had to show for it was a sore head and this label off one of the bottles), it naturally struck a chord with me: 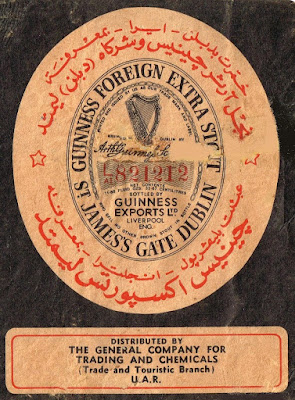 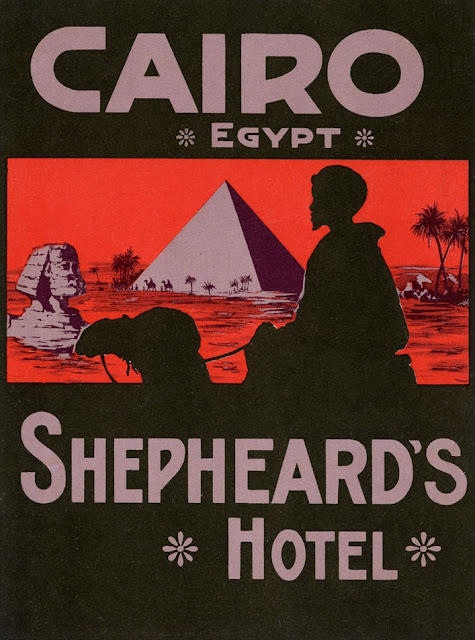 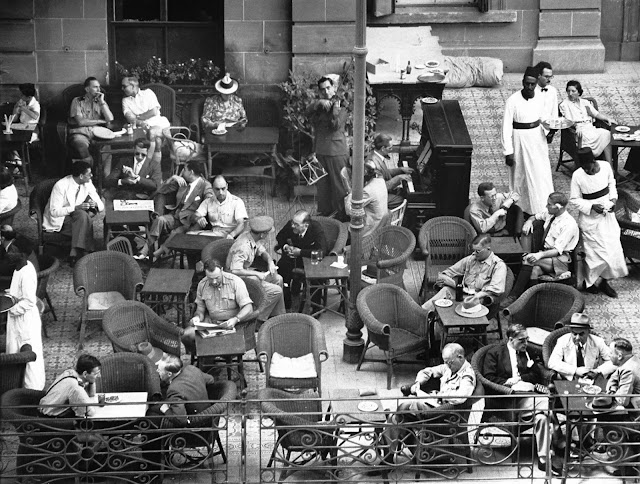 These are the excerpts from Treanor's book:

INTRODUCTION
I SUPPOSE it's usual in a preface to thank persons who gave literary aid and advice, read manuscript, and so forth. But I am under heavier obligation in this book to people like Merv Elias, of the New Zealand Public Relations, who got me to the front when I wasn't supposed to be at the front. I owe a real debt to Merv. He was kept in confinement for a time because of his activities in my behalf. He was threatened with dishonourable discharge from the New Zealand Army and was faced with being sent home in disgrace. Meanwhile I couldn't do anything for him, as I was in the process of being expelled from the Middle East.
Fortunately, all ended well. When Merv's court-martial came to a boil, it had to be called off. It was discovered Merv wasn't in the New Zealand Army after all. He had some kind of queer and unsuspected civilian status. He was merely attached to Public Relations as a newsreel cameraman. This confused the issue until the whole business was dropped. Besides, they decided they didn't want to send Merv home because there was no other newsreel cameraman in the New Zealand forces. That's the way things often go. So it's people like Merv whom I must thank.
CHAPTER VII
Before the Battle
The colonel afterwards insisted that with lures and wiles and sorcery I mesmerised the New Zealand Public Relations into taking me to the front illegally. "You knew you were doing wrong, Treanor,'' he said. No such thing. Everything was done above board through Merv Elias, the New Zealand motion picture cameraman [seen below right, on the Italian front]. Merv had previously received permission to take up [Bob] Landry, of LIFE, who was equally unaccredited, and 11 pages of Landry's pictures had subsequently been published. No secrecy about it.
Merv arranged for me to go with the New Zealanders on a similar basis. Naturally, I said nothing about this to the colonel, since I already knew he wouldn't give me the sweat off his brow. As I told him later, I didn't consult him or ask his permission because my object was to get to the front, not to not get to the front. He tried to play this up as a confession of guilt but there was no guilt whatever. Merv and I were blameless. We were two woolly lambs.

Merv picked me up at Shepheard's on a brilliant October morning, a week before the Eighth Army launched its attack on El Alamein. He was tired and distracted and said he had lost his hat the night before in the bar. I was nervous to get off before something interfered, but Merv insisted on finding the hat and spinning a long yarn about an odd sawed-off character with whom he had been having some whiskies when he last saw the hat.
"He stood about five foot three," said Merv, "but he didn't look small because he was so powerful. If you took a rock and bashed a couple of eyes in it, you'd have his face, into which was stuck a black pipe. He wore white trousers, a long black coat and a black hat like Anthony Eden's which he never took off." According to Merv, this character approached the bar in a dignified and resolute manner and spoke in a voice that could be heard in tempest: "Make it a beer." It wasn't a rude voice. It was the kind of voice that would necessarily go with a human barrel. He lifted his glass to himself in the mirror, according to Merv, and drank himself a bottoms-up toast. "Make it a beer," he thundered again. Merv took a stroll alongside to get a better look and the sawed-off dynamo turned on him, exposing some jagged, tobacco-stained teeth. "Can I shout you a drink, son?" he roared. Anyone can shout a New Zealander a drink any time of the day. Merv reckoned he'd have a gentle whisky and the sawed-off gent shattered the cool tranquillity of Shepheard's bar with "Make it a whisky." Then he told Merv (and the rest of the bar for that matter) his story. For 30 years he had been shipping out all over the world, and for all 30 years he had nursed an ambition to have a drink in the Shepheard's bar. Not once in 30 years, however, had a ship of his touched Egypt until the day before, when he had put in at Suez. So here he was at last in the Shepheard's bar, which is not so wonderful as to be worth 30 years of anticipation, but on the other hand it's not bad.
In these war times it's fairly colourful with uniforms of historic  regiments, and until Rommel was knocked out of Africa it was redolent of desert talk. Military secrecy never benefited by the Shepheard's bar but for the morale it did a great deal. One of the greatest sights in Egypt was watching an officer come directly in from the desert, brick-red from the sun, in sun-faded uniform, his hair stiff with sand, and call for a beer. The curious expression that would live on his face while he handled the cool glass before raising it to his lips was worth a Picture of the Week in LIFE Magazine. I don't know why Landry never got it. The Shepheard's bar is all right. It has that cool feel and musty smell of an old dignified bar made of heavy, polished dark woods - a look and smell that the chromium and red leather cocktail lounges will never achieve.
Many a hat has been lost there besides Merv Elias.
Merv had no conclusion to his story about the sailorman. The last he remembered, the fellow was in a thundering conversation, right in his element, talking first to a Scotchman [sic] in kilts on his left, and then to a pukka hussar in cherry-red pants on his right. Some time after that Merv lost his hat. We eventually found the hat in a heap of lost hats that Shepheard's maintains behind the desk. Anyone can shuffle through this pile until he finds his lost hat. It's honour system. The clerk never asks any questions unless you start trying on hats to find one that fits you.
By this time the noon drinking period had rolled around and we had a gentle whisky or two to get Merv back into shape and then we climbed into the back of our truck, spread our sleeping bags on the floor, and dropped off into a siesta, rolling past the Sphinx, the Pyramids, and finally on to the desert road which leads to the Mediterranean and then up to EI Alamein. 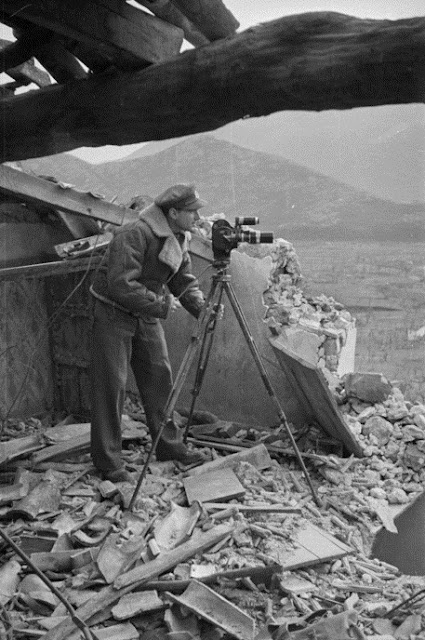 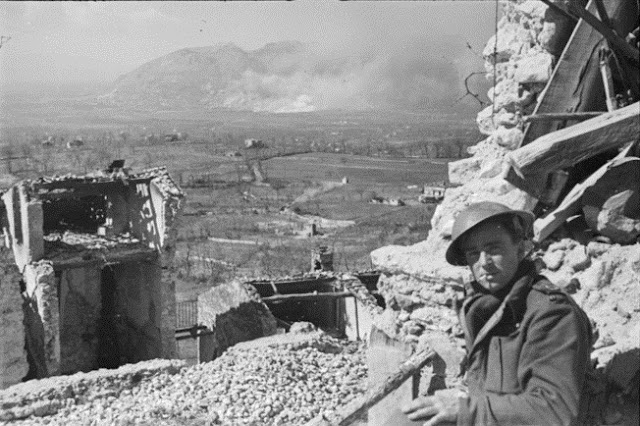 Merv Elias working at Monte Cassino, where Tom Treanor
had been the first Allied war correspondent to step foot.
Mervyn Daniel Elias was born in Wellington, New Zealand, on January 30, 1914. He worked as a cinematographer in Wellington and in 1940 wrote a book about a New Zealand boy teaching his fellow students the finer points of rugby union football at an English private school. 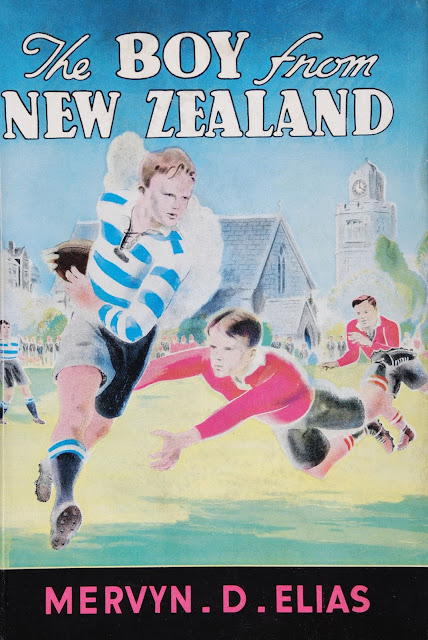 On January 27, 1941, the New Zealand Government approved a war Cinema Unit and appointed Elias and Ron McIntyre as operators attached to the Second New Zealand Expeditionary Force. They arrived in Cairo on March 28 and set up a base at Maadi Camp. One of their first projects was a National Film Unit newsreel showing the aftermath of the Battle for Crete (scene below). 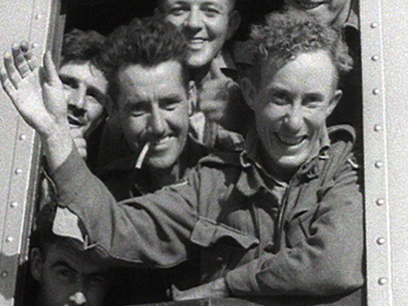 Elias returned to New Zealand, but beyond 1954 nothing is known of his subsequent life. He may have settled in the US. 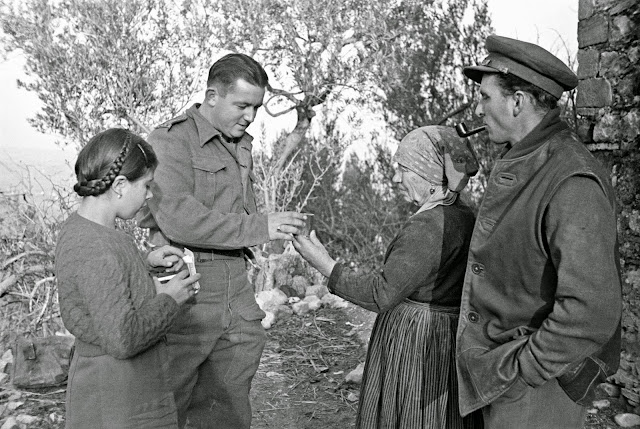 Elias, right, with Italian women, and below filming from on top of a van in the Egyptian desert 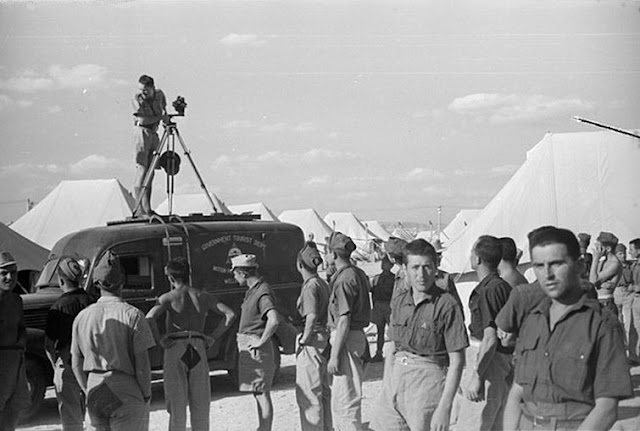 Posted by Robert Messenger at 01:02

I greatly enjoyed the piece on Traynor, and listened to the NBC radio bit just now. You've dug up some very interesting people :D