A Different Kind of Advice on Typewriters 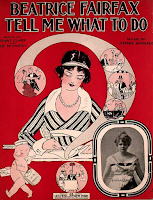 Oh Beatrice Fairfax, give me the bare facts,

How do you make them fall?

If you don't save me, the things the Lord gave me

Never will be any use to me at all. 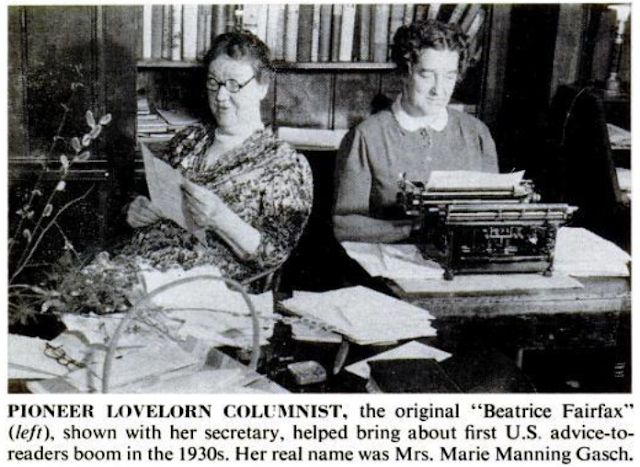 Last week The New Yorker ran a “Cultural Comment” by Jamie Fisher titled “The Age of Peak Advice”.  “You can get life tips from a greater diversity of voices than ever before, but what are we really searching for?” asked the article’s go-first. “There is often something disappointingly unambitious at the heart of ‘literary’ advice columns these days, tiny fixes wrapped up in lush language.” Fisher wrote, “We are living in the age of peak advice … The origins of the advice boom trace back to 2010 …” 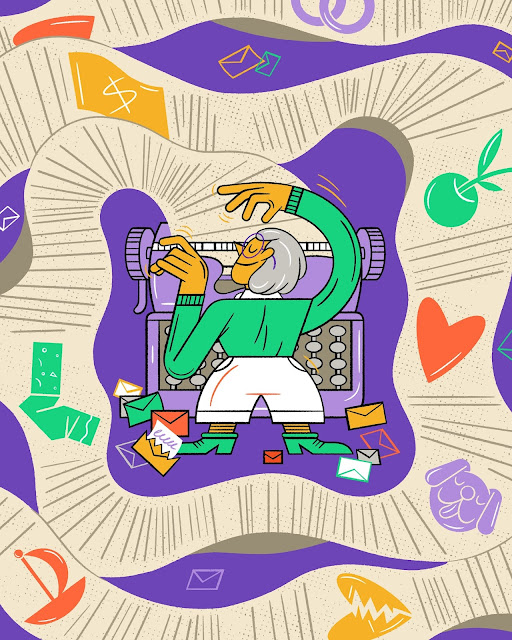 Typewritten advice columns in print newspapers go back, in fact, to 1898, 123 years ago, when Marie Manning wrote the first installment of “Dear Beatrice Fairfax”. Manning, born in Washington DC on January 22, 1872, and a graduate of Miss Kerr's Finishing School for Girls, began writing as a columnist for the New York World in 1896. She followed her editor when he moved to the New York Evening Journal in 1898 and collaborated with two other female journalists on a woman's page titled the “Hen Coop”, which received three readers' letters seeking personal advice. Manning suggested a new column exclusively devoted to personal advice, named "Dear Beatrice Fairfax", after Dante's Beatrice and her own family's country home in Fairfax County, Virginia. The column began on July 20, 1898. Here is the first installment: 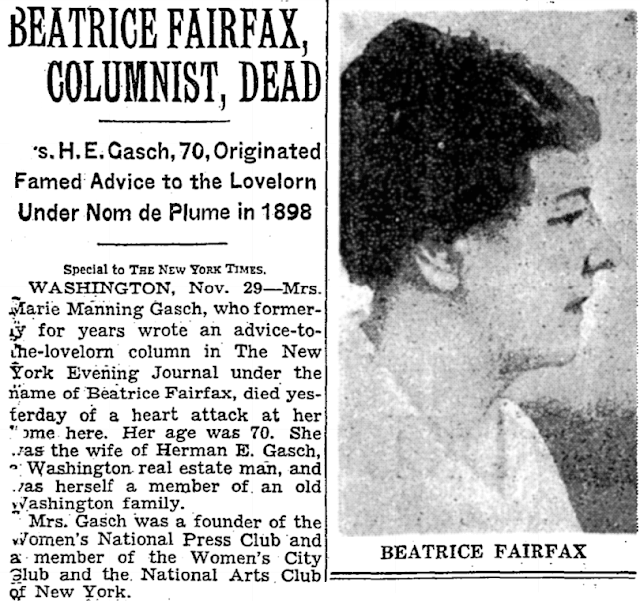 Manning married a Herman Eduard Gasch in 1905 and thereafter devoted most of her life to raising their two sons. But the Wall Street Crash of 1929 caused family financial hardship, so she went back to work for the New York Evening Journal, again writing under the name Beatrice Fairfax. Mrs Gasch wrote the column until her death, at age 73, on November 28, 1945. 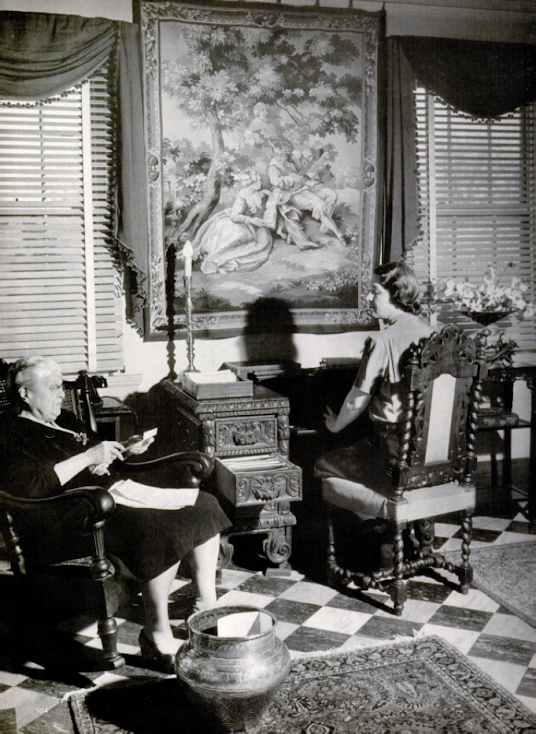 Dorothy Dix dictates her copy to her secretary, a Mrs Cyril Ryan, in 1940.

What was to become an even more internationally famous advice column had first appeared under the heading of “Dorothy Dix Talks of Women We Know” on the “Woman’s Way” page of The Daily Picayune-New Orleans on Sunday, April 5, 1896. The name “Dorothy Dix” had been used in The Daily Picayune since August 18, 1895, when it appeared over an article headed “Discourses About the Philosophy of Clothes”. Dorothy Dix was Elizabeth Meriwether, who was born on the Woodstock plantation on the borders of Montgomery County, Tennessee, and Todd County, Kentucky, on November 18, 1861. Dix had become America's highest paid and most widely read female journalist at the time of her death in 1951. Her advice on marriage was syndicated in newspapers around the world and had an estimated audience of 60 million readers.

Meriwether married her stepmother's brother, George Gilmer, in 1888 and began her journalism career after her neighbor Eliza Nicholson, owner of The Daily Picayune, saw her work and offered her a job as a reporter. As Mrs Gilmer she wrote obituaries, recipes and theater reviews. She later adopted the name Dorothy Dix, using Dix in honor of an family slave named Mr Dick, who had saved the Meriwether family silver during the Civil War. At least that was Gilmer's story. In fact the name Dorothy Dix had been around for a long time before she started writing advice columns. It was used when referring to Dorothea Lynde Dix (1802-1887), an author, teacher and reformer. Her efforts on behalf of the mentally ill and prisoners helped create dozens of new institutions across the United States and in Europe and changed people’s perceptions of these populations. Charged during the American Civil War with the administration of military hospitals, Dix also established a reputation as an advocate for the work of female nurses. Her own troubled family background and impoverished youth served as a galvanizing force throughout her career, although she remained silent on her own biographical details for most of her long, productive life. As for “Dorothy Dix Talks”, it would become the world's longest-running newspaper feature. 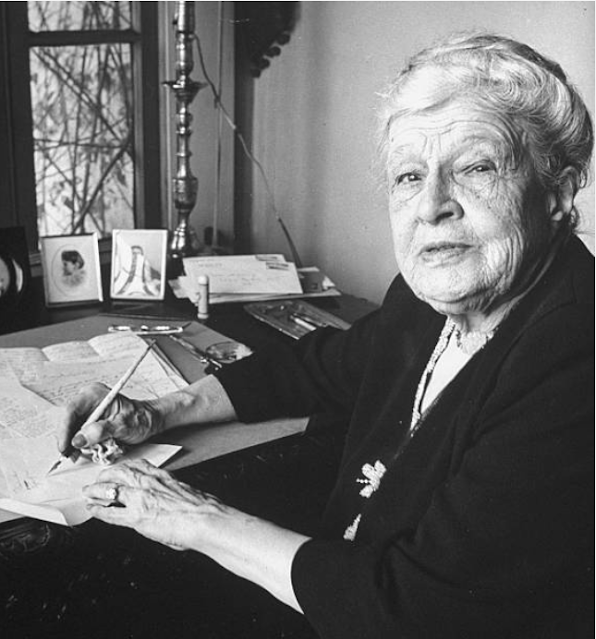 The column's widespread popularity began in 1923 when Dix signed with the Philadelphia-based Public Ledger Syndicate. At various times the column was published in 273 papers. At its peak in 1940, Dix was receiving 100,000 letters a year and her estimated reading audience was about 60 million. On top of all this, for years Gilmer worked for William Randolph Hearst’s New York Evening Journal as its leading crime reporter. She died in New Orleans on December 16, 1951, aged 90. But her name lives on in Australia, where the term “Dorothy Dixer” comes from the columnist’s reputed practice of framing questions herself to allow her to publish prepared answers. Here a “Dorothy Dixer” refers to a question from a Member of Parliament to a minister that enables the minister to make an announcement in the form of a reply. 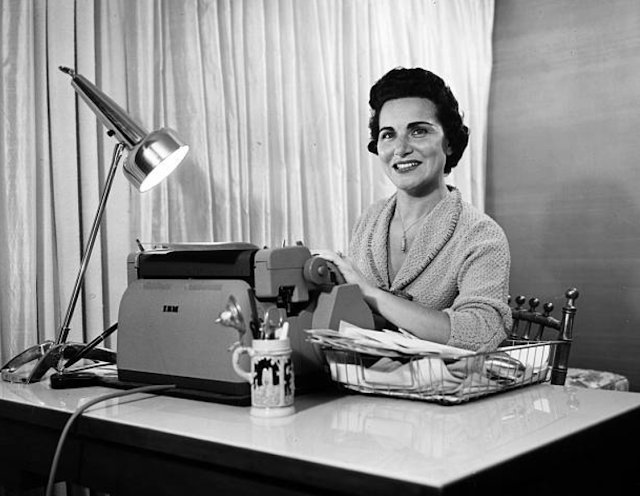 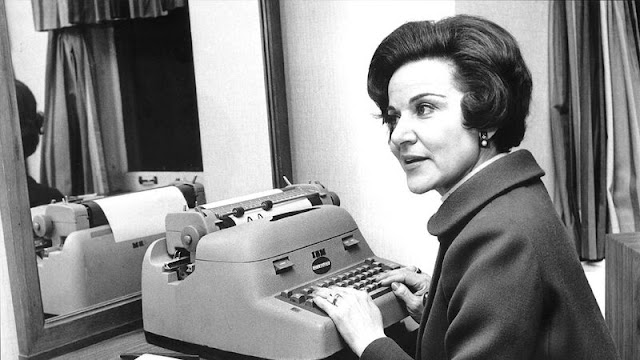 The most notable successors to Beatrice Fairfax and Dorothy Dix were identical twin sisters, Abigail Van Buren and Ann Landers, born 17 minutes apart as Pauline Esther “Popo” Friedman and the slightly older Esther Pauline “Eppie” Friedman respectively, in Sioux City, Iowa, on July 4, 1918. They had become “the most widely read and most quoted women in the world” by 1958, according to LIFE magazine. Pauline Esther became famous for her Dear Abby advice column, founded in 1956. She adopted Abigail Van Buren by combining the Old Testament prophetess from 1 Samuel with President Martin Van Buren. The Dear Abby column was syndicated in 1400 newspapers and had 110 million readers. Esther Pauline began writing the “Ask Ann Landers” column in 1955 after the death of its creator, Ruth Crowley, who had started the column in the Chicago Sun-Times in 1943. Esther Pauline won a contest to take over the column later that year, and took on the identity of Ann Landers. She continued it for 47 years, by which time its readership was 90 million people. A 1978 World Almanac survey named her the most influential woman in the United States. Pauline Esther died in Minneapolis, Minnesota, on  January 16, 2013, aged 94, and Esther Pauline died in Chicago, Illinois, on June 22, 2002, aged 83. 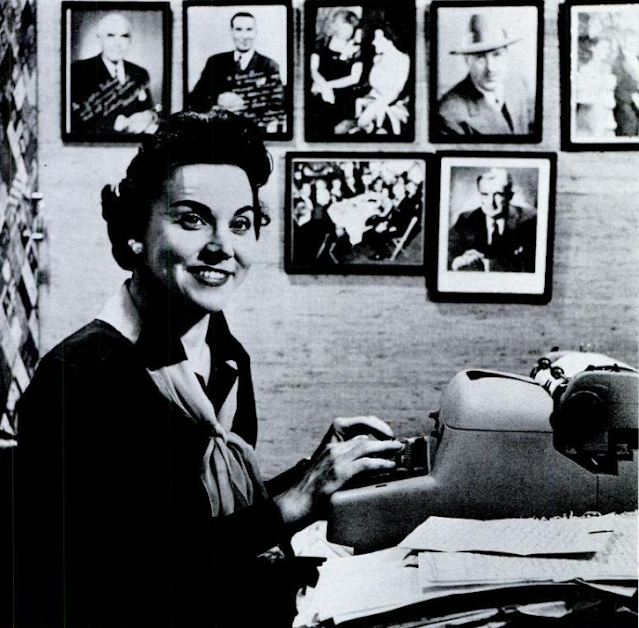 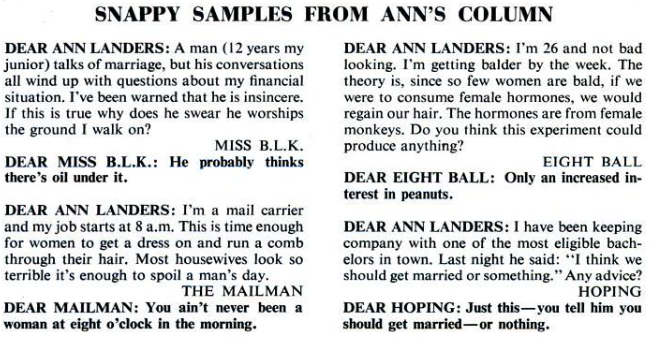 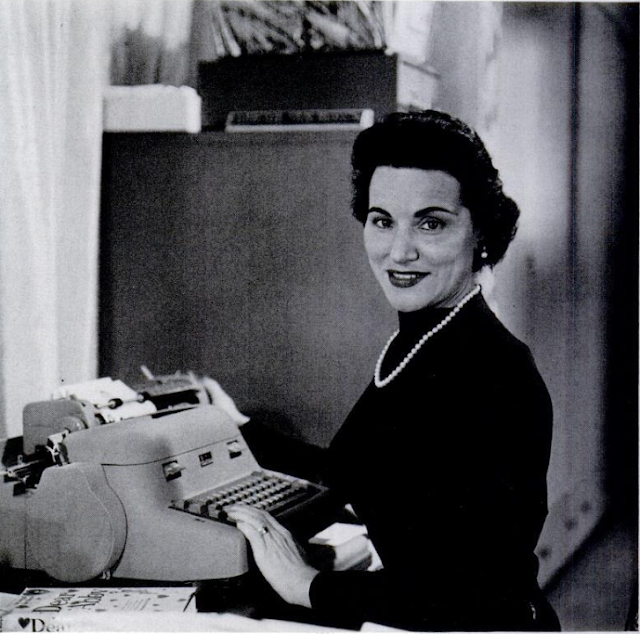 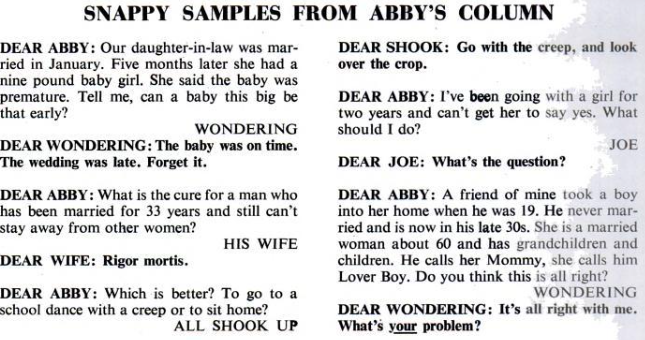 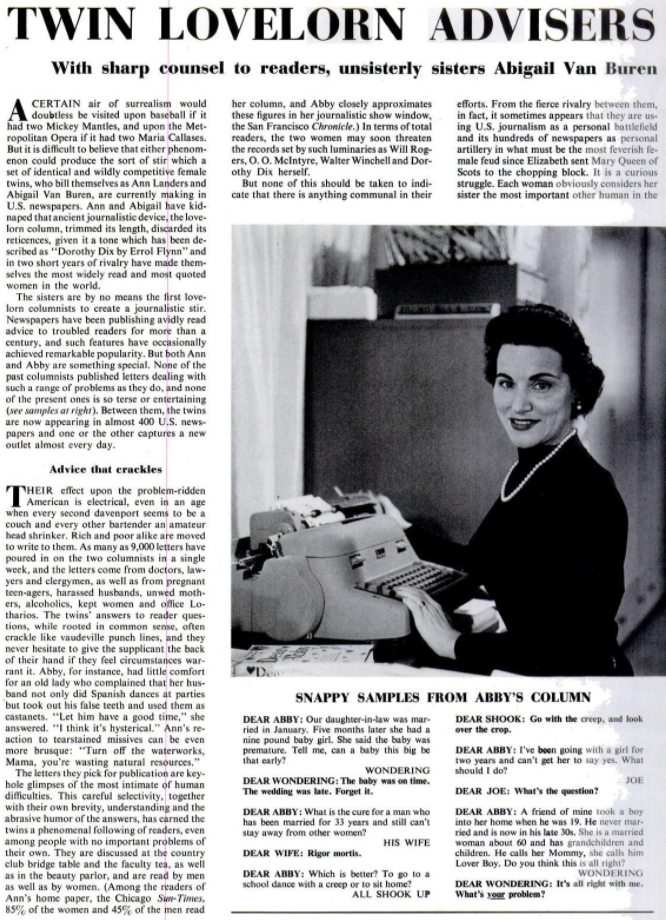 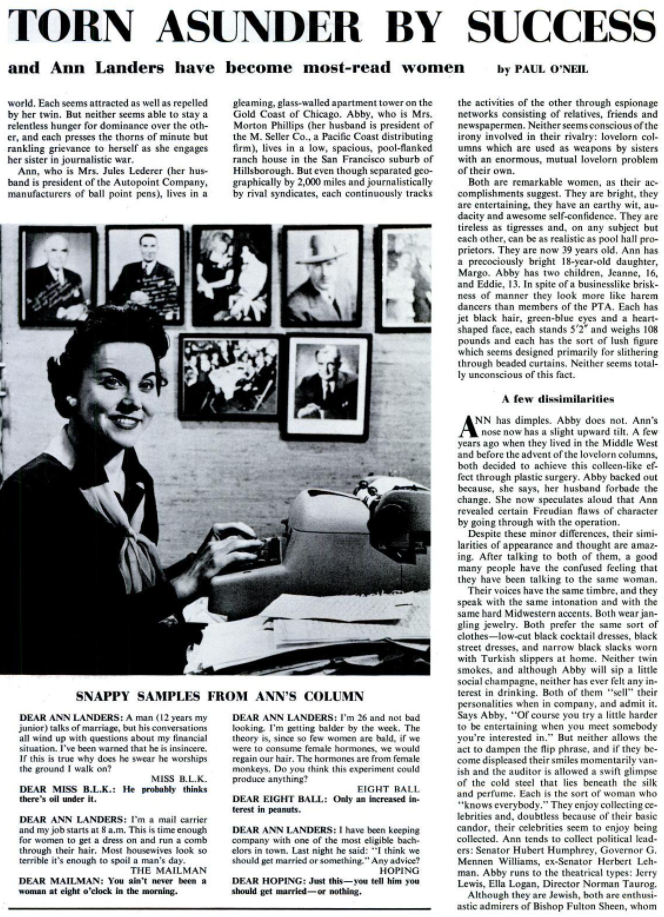 Some other advice columnists 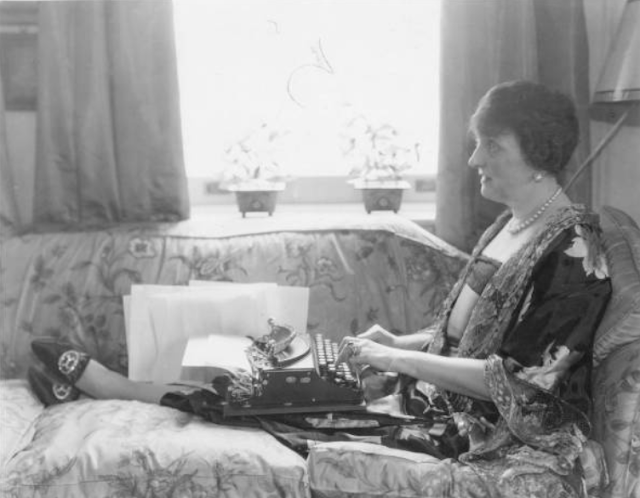 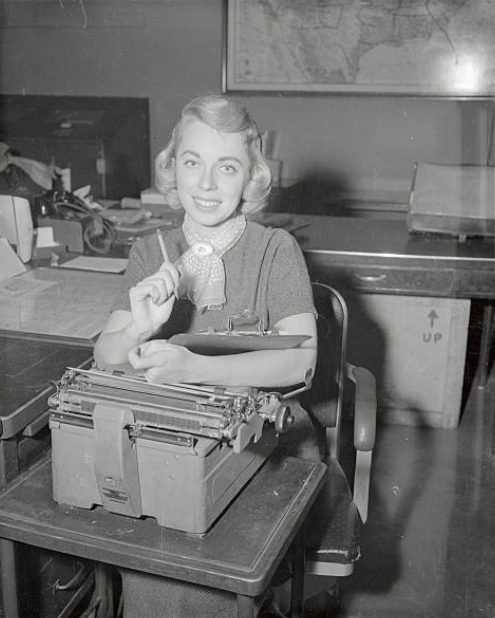 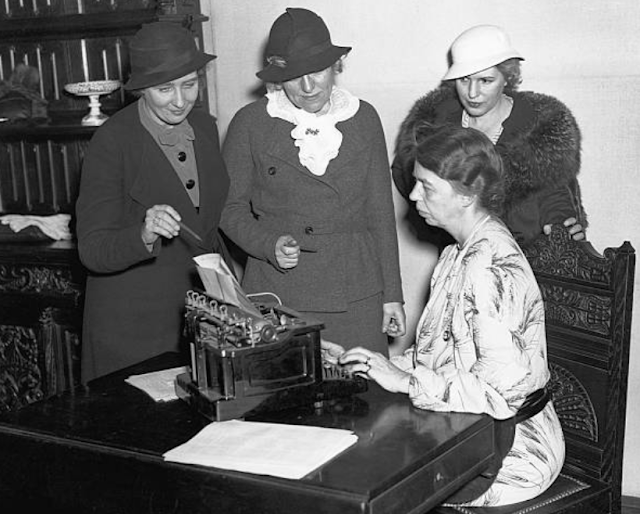 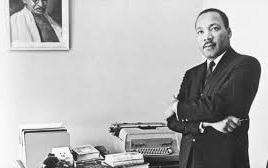 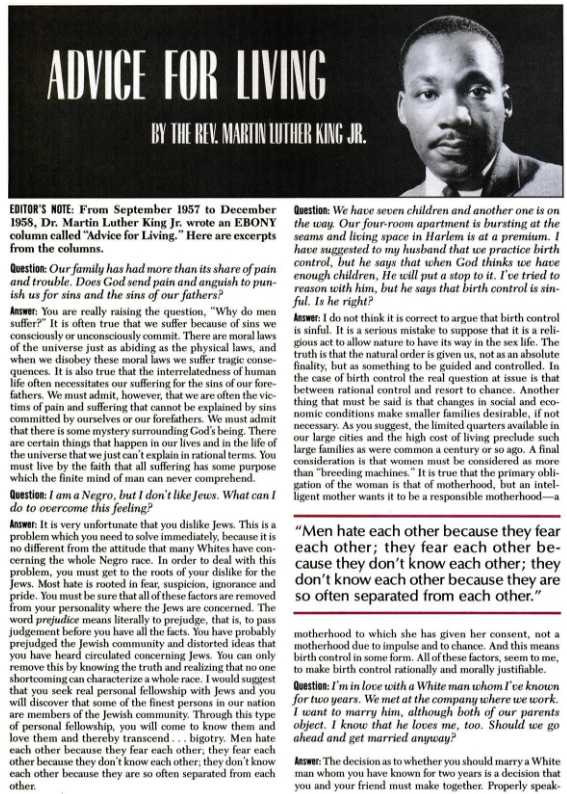 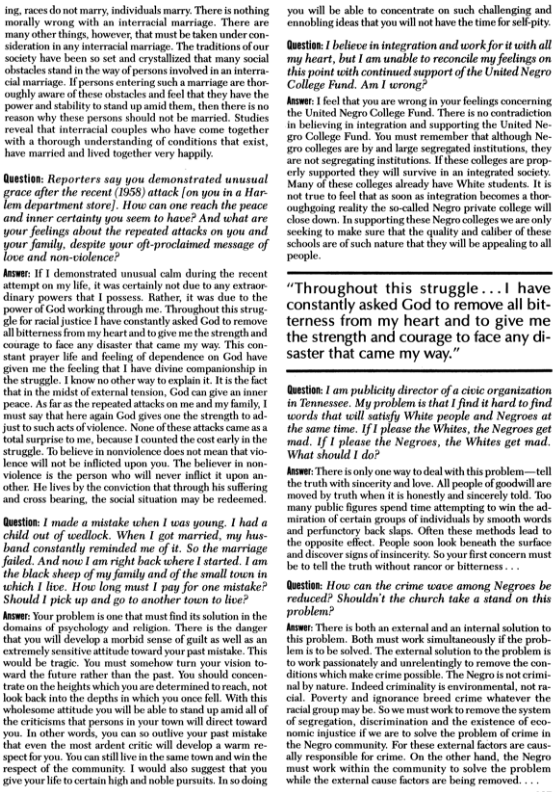 Some advice columnists were men, and in 1958 Montgomery Clift played just such a journalist in the movie Lonelyhearts, based on the 1933 novel Miss Lonelyhearts by Nathanael West and the 1957 Broadway play by Howard Teichmann. Maureen Stapleton, in her first film role, was nominated for an Academy Award for Best Supporting Actress, as well as for a Golden Globe. Here is an Al Hirschfeld illustration of the cast, showing Stapleton at the door  Clift, Robert Ryan, Dolores Hart and Myrna Loy: 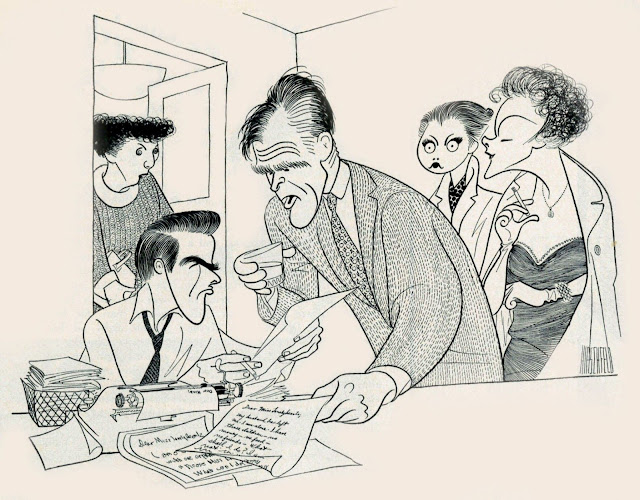 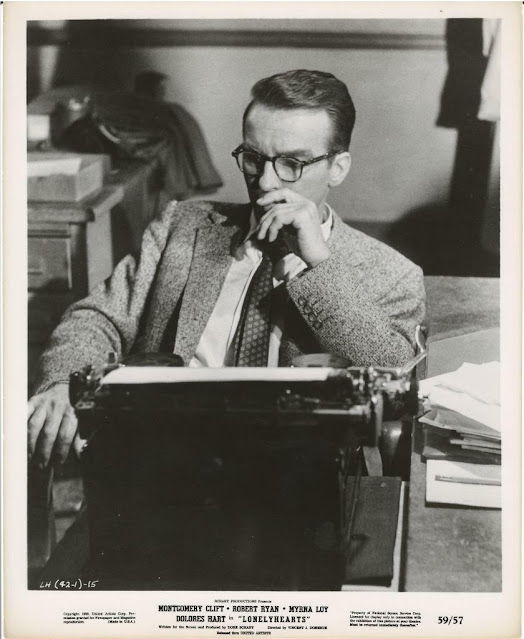 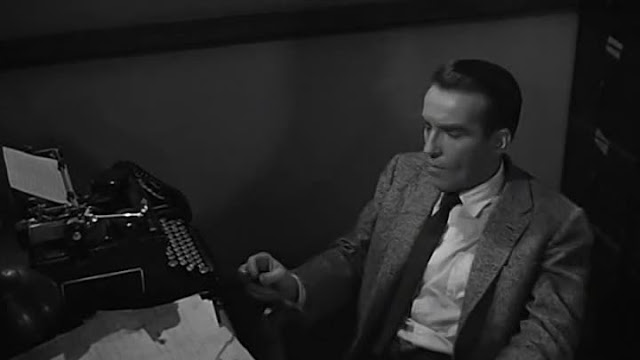 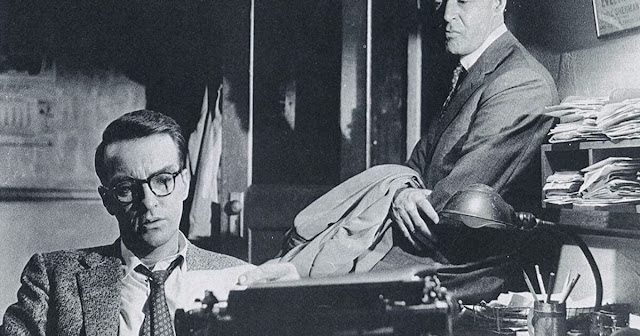 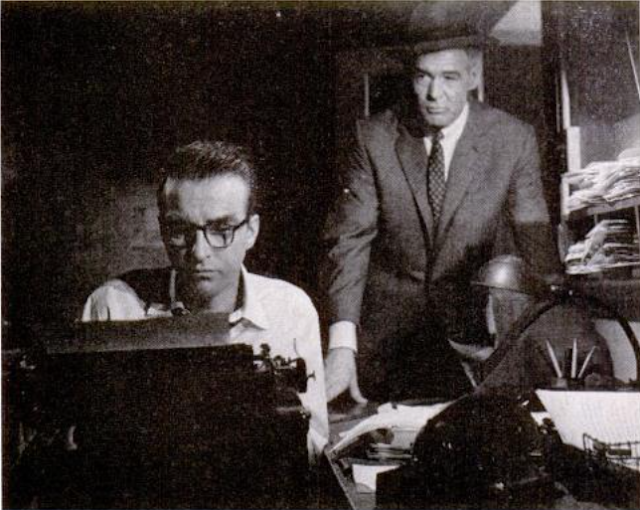 Posted by Robert Messenger at 13:20

MLK wrote an advice column? I learn something from every post of yours.
Love those snappy samples from the sisters.
Fairfax's initial column is more wordy, but also wise.

My mother, who just celebrated her 92nd birthday, loved the Ann Landers column in our daily local paper. She would many times read a question and answer aloud. As a kid, I sorta listened .. sorta not. But, your post triggered a memory tucked away and made me smile.