'My Salinger Year', and Oodles of Typewriters 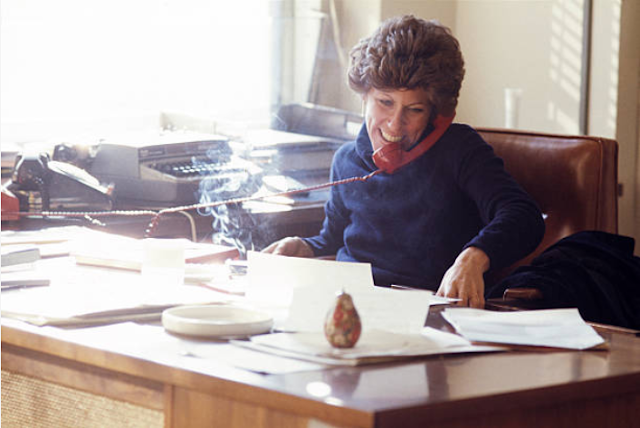 Real female literary agents did smoke at their desk and use portable typewriters – in this case a Smith-Corona, not unlike the one borrowed from her agency by ‘Joanna’ in the movie My Salinger Year. Possibly providing inspiration for the ‘Margaret’ character in the movie was Joni Evans (1942-) of Simon & Schuster, photographed here in December 1976.  Evans helped play “an important part in opening up major executive jobs to women in the book industry as well as making editors and publishers more conscious of the need to think about the markets for a book”.

When a typewriter font is used in the title and credits, it’s a fairly safe bet there will be typewriters in the movie. And there are quite a few being used in My Salinger Year, the film based on Joanna Margo Rakoff’s 2014 book of the same title, about her experiences at age 23 of working in a $18,500 a year clerical job at the Harold Ober Associates literary agency in New York City in 1996. 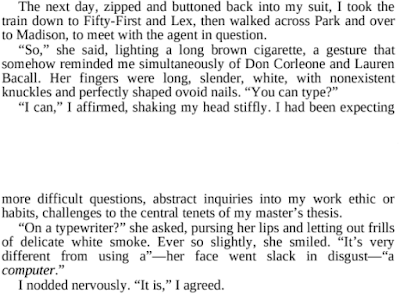 A snippet from Rakoff's book. 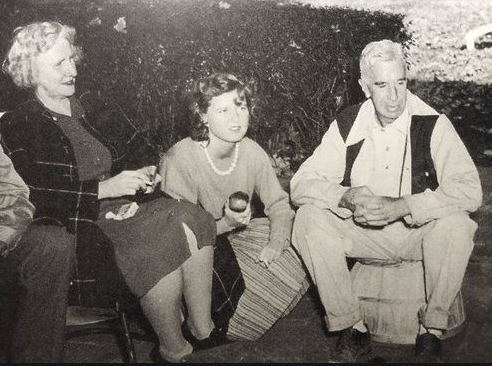 Harold Ober, right, with his wife, left, and Scottie Fitzgerald, daughter of F. Scott Fitzgerald.
The movie stars Margaret Qualley as Joanna, Sigourney Weaver as the agency’s head Margaret and Tim Post’s back as J.D. Salinger (a slightly less challenging role for Post than that of a US Army General in X-Men: Days of Future Past or a concierge in Enemy). 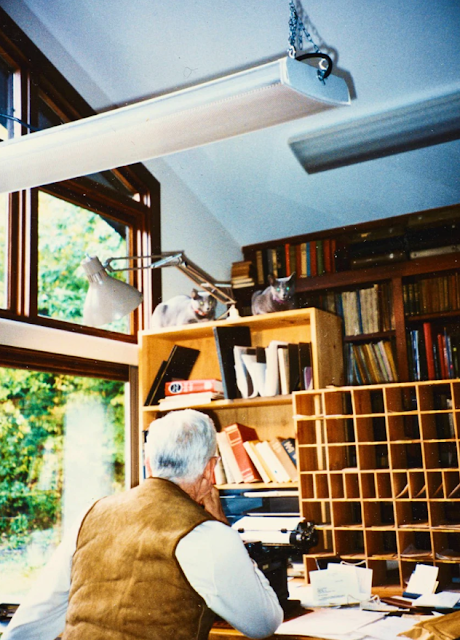 The part of Salinger that Tim Post plays.
One of the more interesting characters is the “Boy from Winston-Salem”, played by Théodore Pellerin, who pulls a Brother manual portable typewriter out of a closet and writes to Salinger while sitting on his bed. 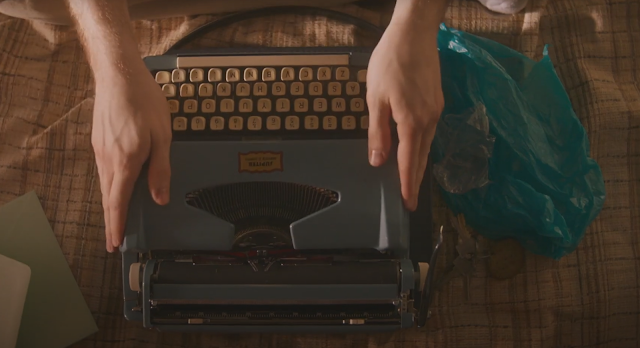 Salinger was, of course, notoriously fan-shy and the job given to ‘Joanna’ by ‘Margaret’ is to open letters in Salinger’s mountain of fan mail, type a 1963 created template reply on an IBM Selectric and then shred the fans’ letters. ‘Joanna”, never having read Catcher in the Rye but having ambitions to be a published author herself, empathises with some of the letter-writers and ignores Margaret’s strict instruction not to reply with words beyond the template (or empathise). Joanna takes from the agency’s small stock of typewriters a Smith-Corona manual portable and types replies on it at home. This leads to an hilarious confrontation outside the agency’s lifts with one of the movie’s stand-outs, petite Romane Denis as a struggling schoolgirl (“What sort of a name is Rakoff anyway?”). 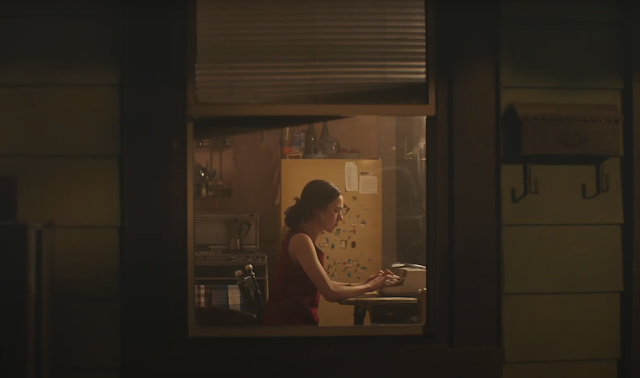 As might be expected, the filmscript takes liberties with Rakoff’s non-fiction, autobiographical book. Rakoff, below, did write, “I couldn’t actually type. I had lied about my typing skills at the urging of the lady at the placement agency. ‘No one your age can type,’ she’d told me, wrinkling her pretty face in a gesture of dismissal. ‘You grew up with computers! Tell her [Margaret] you can do 60 words a minute.’” Immediately after this admission, however, Rakoff said she had been able to type at 60 words a minute, having, as a New York middle school student, taken a state-mandated typing class in eighth grade. “For a few years afterward, I pounded out papers on the typewriter at my dad’s [dental] office, never glancing down at the keys …”  For all that, the Joanna in the movie struggles to get the IBM Selectric started, and is very hesitant in her initial typing. But no worry, as Margaret hates computers and only allows one into the agency during Rakoff’s time there, so that her staff can check on people lifting Salinger copyrighted material and publishing on their blogs. 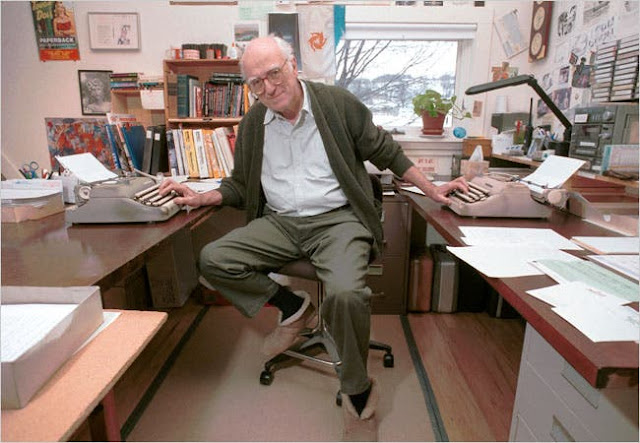 'Joanna' and 'Margaret' find they both love the work of Donald Westlake. 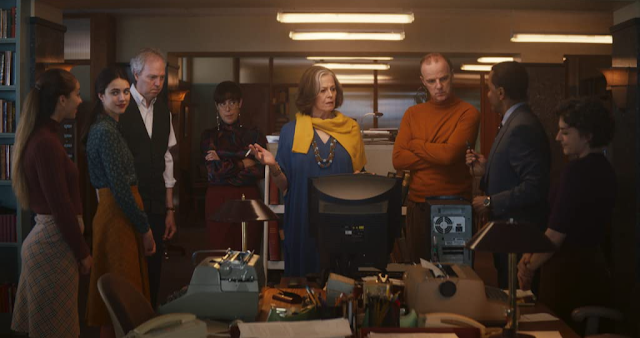 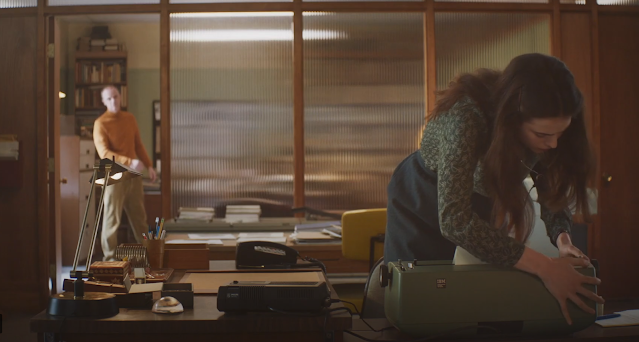 Trying to find the 'start' switch. 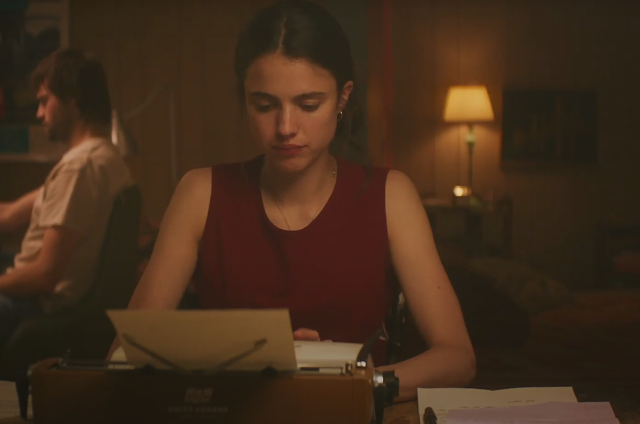 Working from home on an SCM manual portable.

Everyone uses typewriters at this agency. 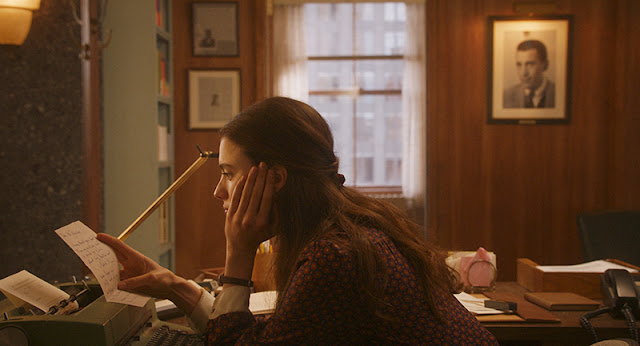 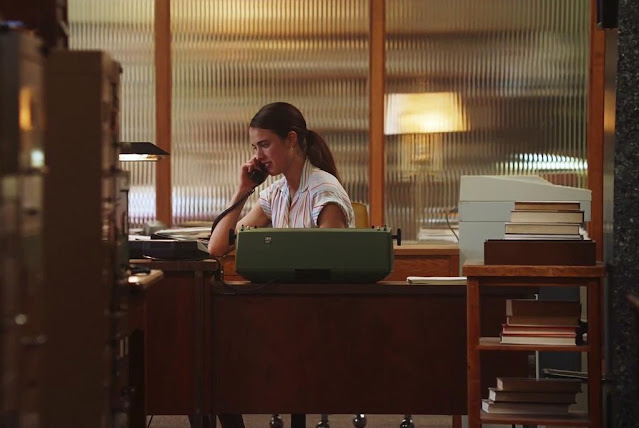 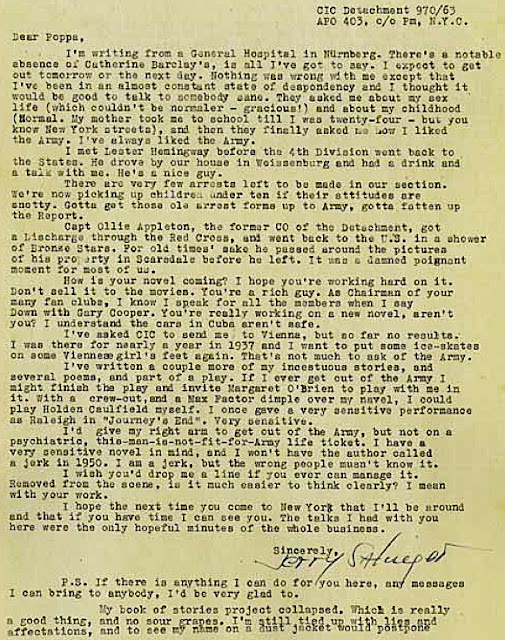 Salinger may have come to shun fans, but he was once a fan himself, a fan of Hemingway. 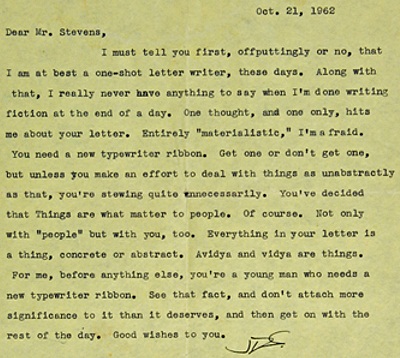 And Salinger did reply to fans, at least up to 1962.
A few writers represented 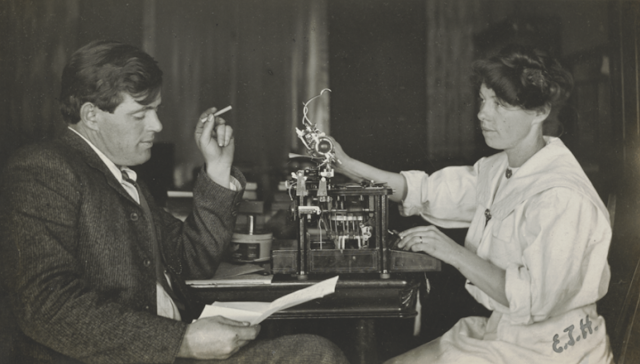 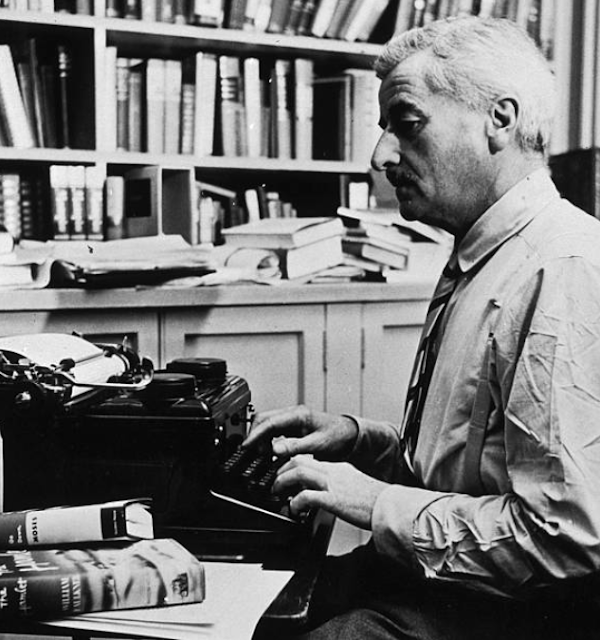 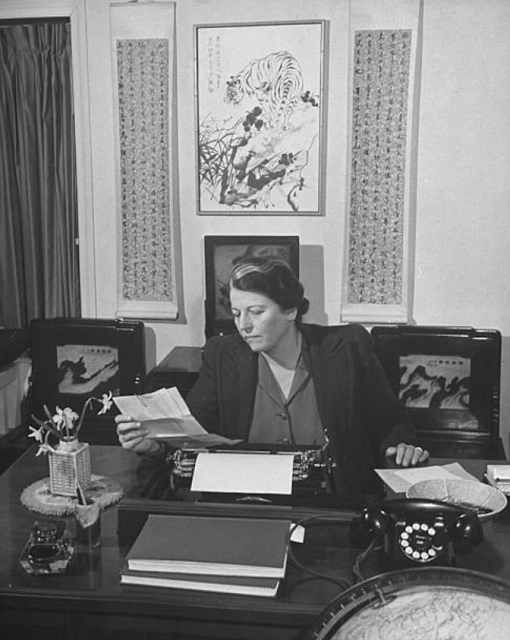 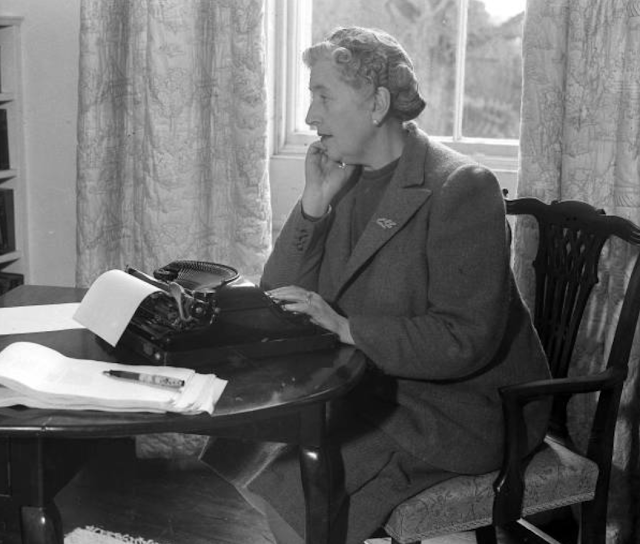 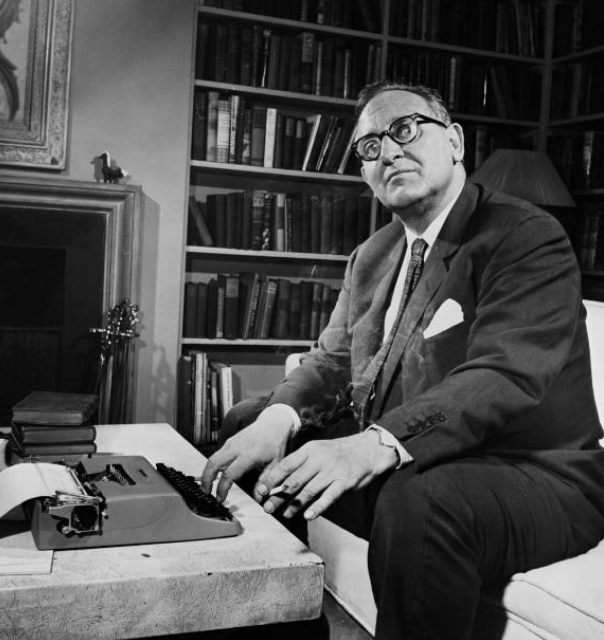 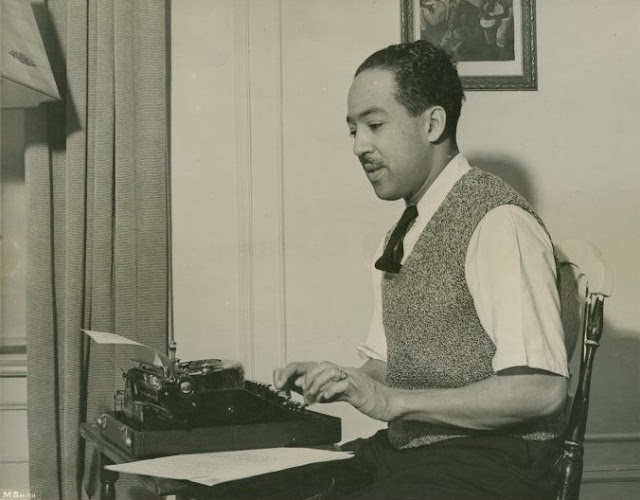 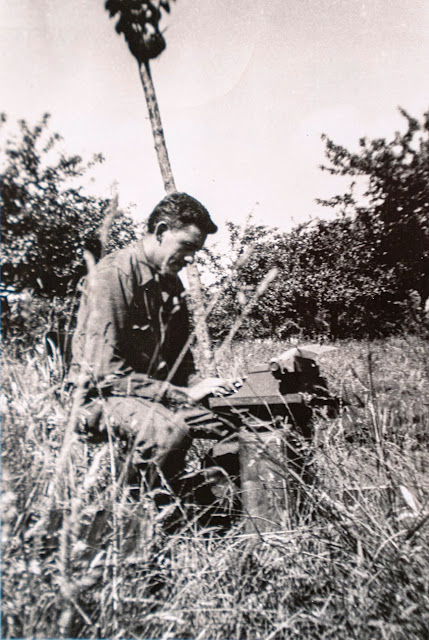 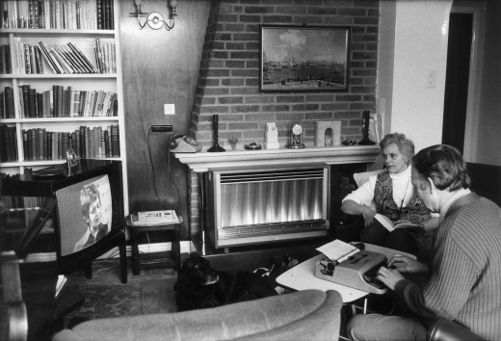 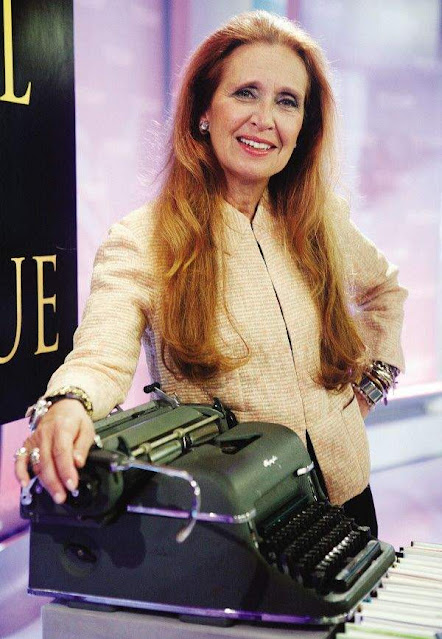 It is nice to read letters written by Salinger. I need to look for the movie on DVD or streaming. Thanks for all the typewriter photos.

I love the Salinger picture. I occasionally drag a Hermes Baby out into the yard and type on a little table. But I'm most jealous of the Herriot picture ... I could NEVER do anything useful with the TV in the room.

The movie won't be released in the US until next month, apparently. While the reviews don't represent it as a dismal experience, they're not too kind. I'll watch it if it's free to stream.

The letter to Hemingway is nutty. Apparently they had met in August 1944, after the liberation of Paris, so that and Salinger's impending nervous breakdown explains the chummy, manic tone.

The premise of the move sounds fun, and the wealth of typewriters is appealing. I hope it's decent!

Thanks for your comments Richard, John, Marty and Bill.
I should have mentioned that I wrote this after seeing the movie on Monday, so most of it is my own take on "My Salinger Year".
I enjoyed it, and was glad I got to see it. I think you will be too, Richard. Yes, it is quite decent, and the Guardian review ("bafflingly insipid, zestless ...") was overly harsh in my opinion. It didn't move me emotionally, but there were some really amusing moments - a lot of it was sombre too. I'd rate it 3.5 out of five.