Oberwager’s Typewriter and the Sour Grapes of McCarthy’s Wrath

which declared, “This Machine Kills Fascists”

·       Jerry Oberwager’s reward was to be targeted 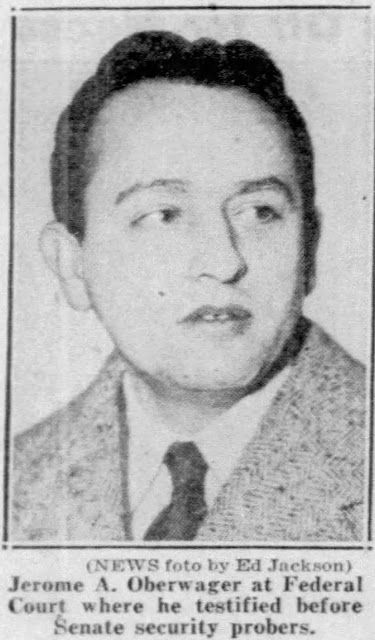 At 6pm on December 30, 1952, a Bronx sculptor and United Nations employee and his wife stepped off Air France flight 009 from Paris at Idlewild Airport in Queens, New York City, and were promptly arrested as suspected Soviet Union spies by two special agents of the security division of the US State Department. It was at the height of the McCarthy witch hunt, and in return for everything Jerome Abraham Oberwager had done for his country, serving in the Army Ordnance Division from 1943-46 and aiding mentally scarred American soldiers at the Aberdeen Proving Ground in Maryland in 1944, the US Government turned on him. At the US Army facility adjacent to Aberdeen, Oberwager had made puppets for shows to assist US Army psychiatrist, Pittsburgh’s Lieutenant Colonel R. Robert Cohen, treat combat neuroses. While some respectable American newspapers, such as the Boston Globe, praised his subsequent international work in this area – which had started in the youth workshops of 14th Street in New York City - others in their ignorance denigrated it. Oberwager and his wife and gone to Paris in 1952 for an international conference, at which Oberwager had demonstrated a mechanism for printing presses that he had developed. They returned to face philistines.

Oberwager and Marian Schneyer Oberwager were held overnight at the Ellis Island Immigration Station and the next morning, New Year’s Eve, were questioned for hours by Acting US Attorney George W. Percy. Later they were arraigned before US Commissioner Edward E. Fay on charges of leaving the US without bearing valid passports. In truth, McCarthy’s stooges believed they were both Soviet spies, as The New York Times pointed out in Jerry’s 2017 obituary. The Oberwagers had returned to the US after 18 months working for the UN Economic, Social and Cultural Organisation in Pátzcuaro in south-west Mexico and had flown out of Idlewild for Paris on Air France flight 026/1101 on November 1, 1952, using United Nations laissez-passer No 5664. A UNLP is a diplomatic travel document issued by the UN under the provisions of Article VII of the 1946 Convention on the Privileges and Immunities of the United Nations in its offices in New York and Geneva, as well as by the International Labour Organisation. Though it’s a valid travel document which can be used like a national passport and is recognised worldwide, the Oberwagers’ department had set off alarm bells among McCarthy’s battalion of stool pigeons.

Percy told Fay the Oberwagers “were not cooperative” because they refused to tell him they were members of the Communist Party. The Oberwagers’ attorney Edward J. Malament, an officer of the New York chapter of the progessive public interest association the National Lawyers Guild, asked Fay whether the couple had become victims of “current hysteria”, a suggestion Fay didn’t take kindly (Big Joe was watching!). Nonetheless, while Perry recommended bail of $10,000 each, Fay set it at $5000 each, pending action of a federal grand jury. Jerry Oberwager resigned from the UN the next day, after six years of service. But he didn’t disappear from McCarthy’s sights, far from it. On February 19, 1953, he was questioned by the US Senate Internal Security subcommittee at the US Court House. Oberwager told the subcommittee he had been a UN visual information officer and had taught film scriptwriting in Pátzcuaro. He refused to tell the subcommittee whether he was a Communist, or indeed whether he was the same man out on bail over the immigration issue. In late November the subcommittee listed Oberwager as one of eight men in “important military posts” who had “refused to deny evidence of Communist Party membership”. 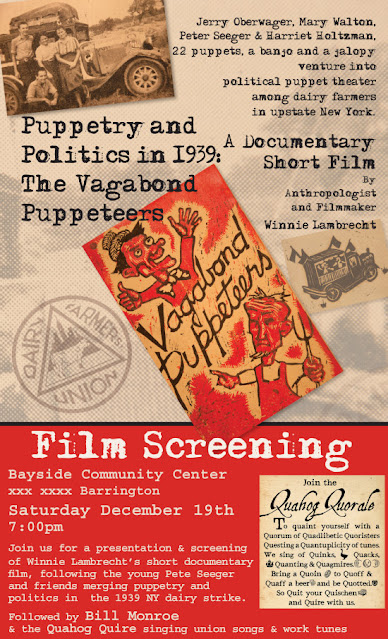 What brought on these suspicions of the Oberwagers being Communists was, as difficult as may be to believe, Jerry Oberwager’s involvement with a group called the Vagabond Puppeteers. In 2016 a short film called Puppetry and Politics in 1939: The Vagabond Puppeteers was screened. It told the story of how four young New York artists - Mary Walton (later Walton Jimenez), Oberwager, Pete Seeger, and Harriet Holtzman (later Holtzman Lansky) - travelled through upstate New York in the summer of 1939. Their initial aim was to help rural farmers obtain electricity, but they soon realised that the true issue was the price of milk, which was so low that the farmers were producing it at a loss. The group became active in the Dairy Farmers Union campaign of milk strikes by adapting their puppet performances to support the message of the strikes, entertaining the pickets, and preventing the delivery of ‘scab’ milk to the processing plants. The quartet converted a 1929 Oldsmobile into a mobile stage and made a cast of 22 papier-mâché puppets. During the tour they lived largely on the donations of the upstate farming communities. 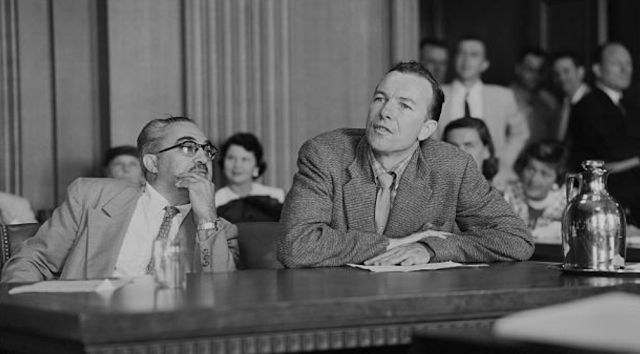 In 1955 Pete Seeger answered a subpoena to testify before the House Un-American Activities Committee, but refused to answer questions he said were improper, asserting a First Ammendment right not to speak. This led to a long court battle. He was indicted for contempt in 1957 and convicted in 1961. 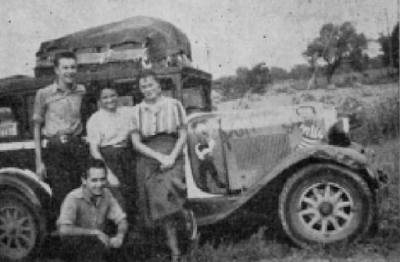 The Vagabond Puppeteers: Oberwager kneeling in front of
Seeger, Harriet Holtzman and Mary Walton.
At the end of this trip Oberwager returned to his loft on the sixth floor at 57 East Fourth Street, East Village, Manhattan. There he was joined by the wandering minstrel and his co-Puppeteer Pete Seeger. The Vagabond tour had started just after John Steinbeck’s classic novel The Grapes of Wrath was published, on April 14, 1939. A little more than eight months later, on January 24, 1940, John Ford’s movie version of the book, starring Henry Fonda, had its world premier in the Rivoli on the corner of Broadway and 49th Street in New York City. Among the first people to go and see it, not once but twice, was Woody Guthrie, originally from Okemah, Oklahoma. Guthrie hadn’t read Steinbeck’s novel, but was familiar with the settings and the subject matter. Guthrie had been working with Alan Lomax on his first album (Dust Bowl Ballads) and Lomax had suggested The Grapes of Wrath as a source of inspiration for one of the songs Guthrie needed to write to complete a two-album, 12-track set. So Guthrie took himself off the movie. Seeger related the story in The Incompleat Folksinger in 1972: “Anything worth discussing was worth a song to Woody ... I remember the night he wrote the song Tom Joad. He said, ‘Pete, do you know where I can get a typewriter?’ I said, ‘I'm staying with someone who has one.’ ‘Well, I got to write a ballad,’ he said. ‘I don't usually write ballads to order, but [recording company] Victor wants me to do a whole album of Dust Bowl songs, and they say they want one about Tom Joad in The Grapes of Wrath.’ I asked him if he had read the book and he said, ‘No, but I saw the movie. Good movie.’ He went along to the place I was staying - six flights walking up - on East Fourth Street. The friend I was staying with [Oberwager] said, ‘Sure, you can use my typewriter.’ 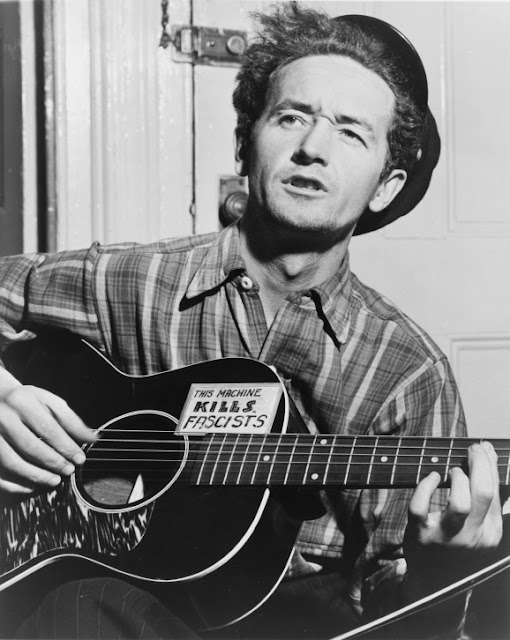 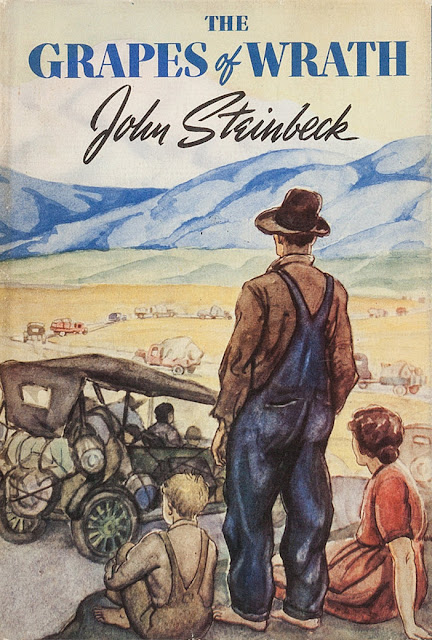 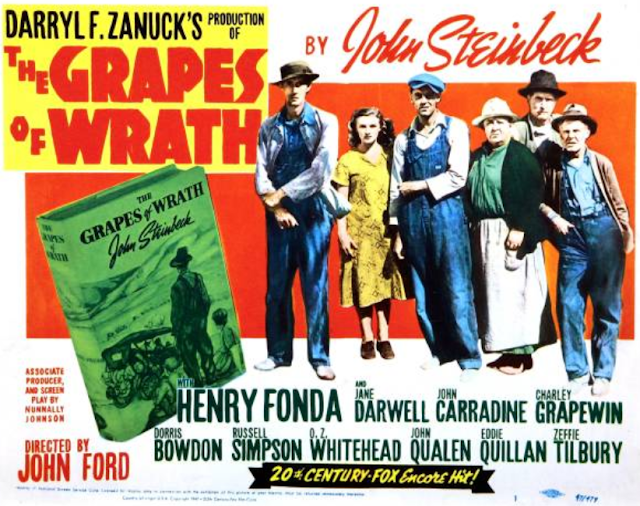 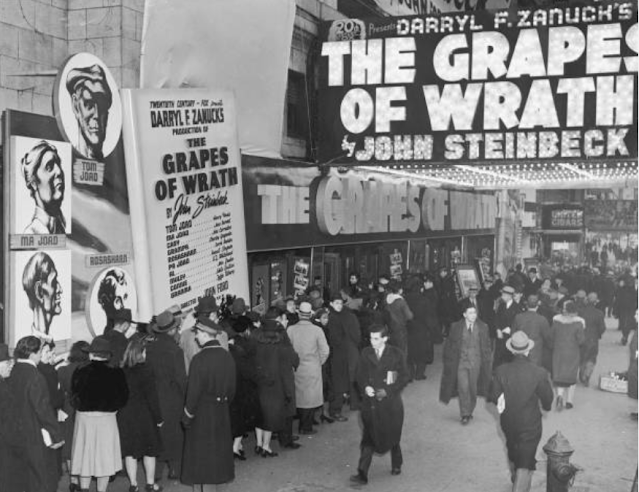 Woody Guthire was in the crowds queuing up to see the movie version of The Grapes of Wrath. 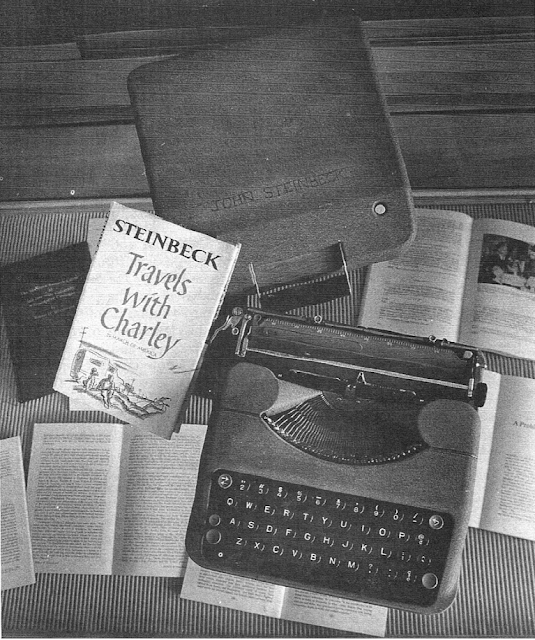 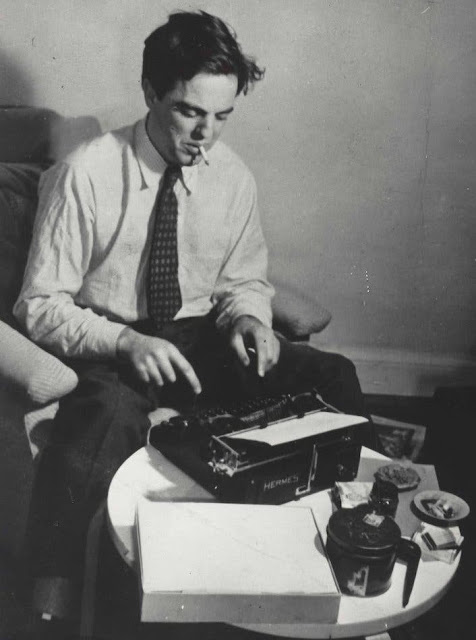 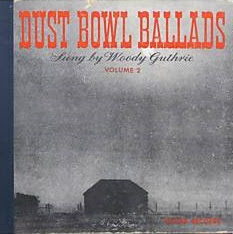 “Woody had a half-gallon jug of wine with him, sat down and started typing away. He would stand up every few seconds and test out a verse on his guitar and sit down and type some more. About one o'clock [Oberwager] and I got so sleepy we couldn't stay awake. In the morning we found Woody curled up on the floor under the table; the half gallon of wine was almost empty and the completed ballad was sitting near the typewriter. And it is one of his masterpieces. It's a long song - about six minutes - and it compresses the whole novel into about 20 verses. It doesn't cover every detail, but it gets an awful lot of them.” 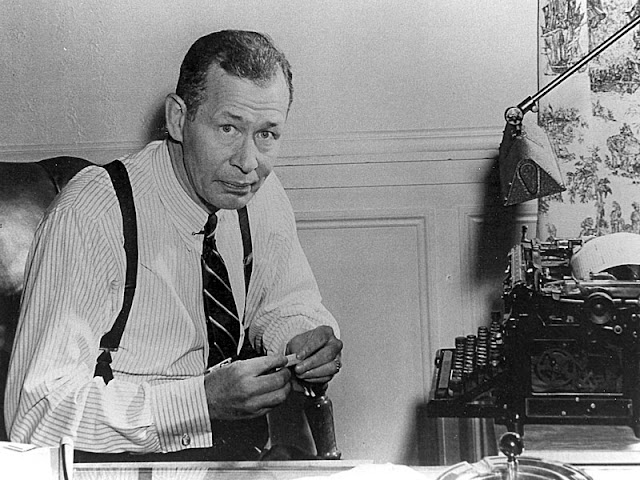 Nunnally Johnson types the filmscript of The Grapes of Wrath on an Underwood 5.
Tom Joad in fact had to be turned into two 78rpm tracks, one of three minutes 24 seconds and the second of three minutes 30 seconds. There were 17 verses. Steinbeck’s novel contained 169,481 words on 464 pages. The average reader will spend 12 hours and 23 minutes reading it at 250 words per minute. The movie lasted 129 minutes, with a screenplay written by Nunnally Johnson. Guthrie’s Tom Joad was recorded at the Victor studios in Camden, New Jersey, on April 26, 1940. In just one a year, Guthrie had condensed a saga that took 12½ hours to read and 1½ hours to watch to seven minutes listening. Little wonder Steinbeck sent a postcard to Guthrie, saying, “You sonofabitch! It took me 250 pages to get the Joads from Oklahoma to California, and you did it in two verses.” Seeger added, “Half the job was done by Nunnally Johnson and Woody did the other half by boiling it down to six minutes.”

Jerry Oberwager died at his home in Great Neck, New York, on January 31, 2017, aged 99 years. He was born in Newark to Austrian parents on August 30, 1917. After high school, he was accepted to the Beaux Arts Institute to study sculpture (he worked as an apprentice in the studio of Paul Manship on the Prometheus at Rockefeller Centre). His obituary said, “throughout his life he loved making reproductions of colonial American furniture, along with an occasional hand-hammered silver spoon for a baby, sculpture, and more. He was an extraordinary problem-solver blessed with intuitive mechanical and engineering wisdom.” He married Marian in 1943 and during their 70 years together they worked and organised and demonstrated and marched for justice, equality, peace and freedom across causes grand and small. Marian died in 2013. 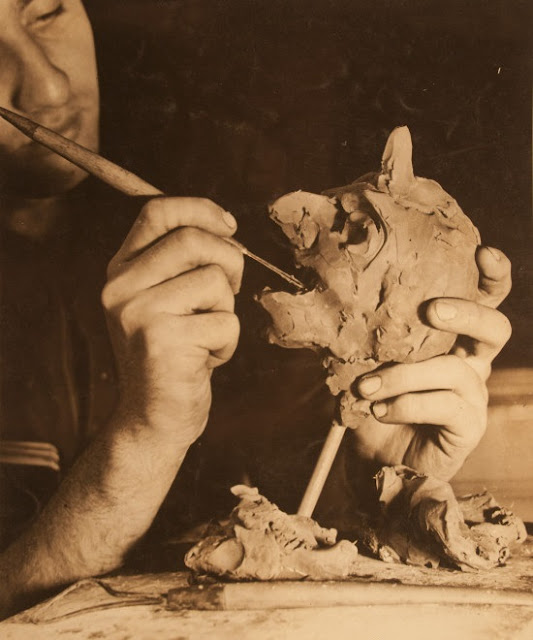 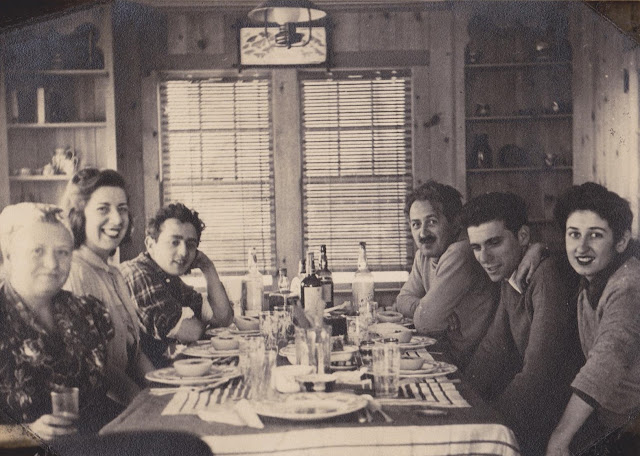 Jerry third from left in a Oberwager family gathering in December 1940. 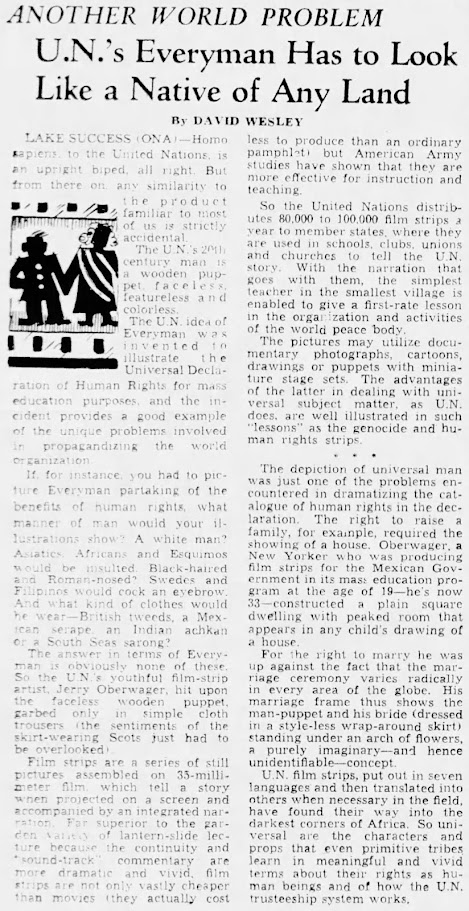 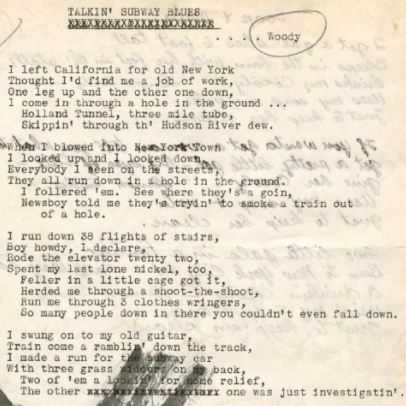 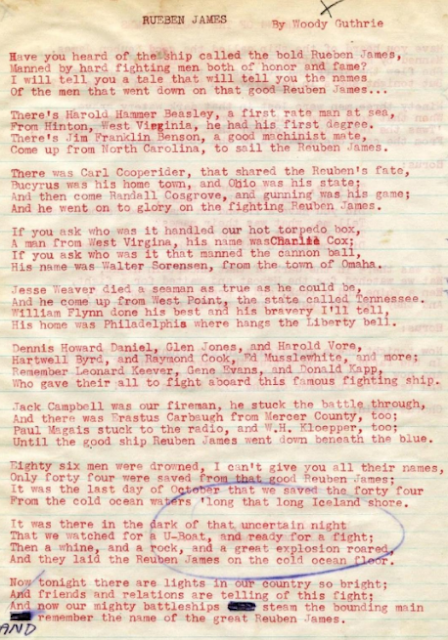 Some of Woody Guthrie's typewritten lyrics. 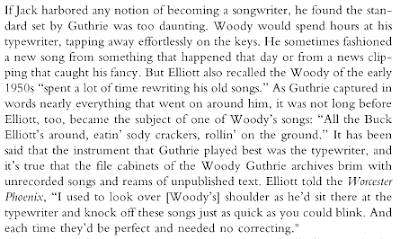 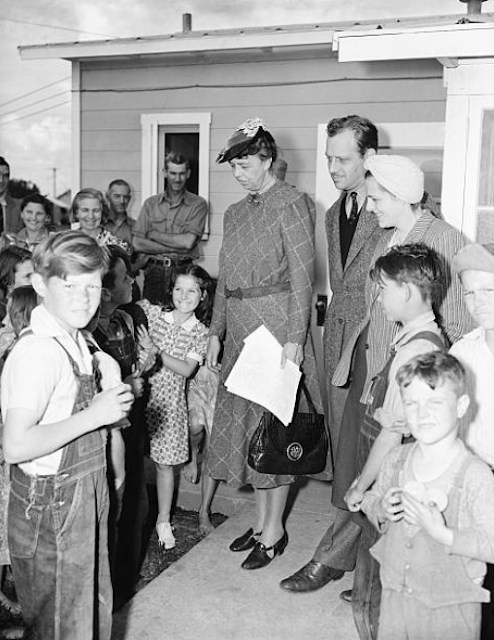 On April 3, 1940, Eleanor Roosevelt visited Dust Bowl refugees at the US Government's migratory workers' camp at Visalia, California, and general conditions described in The Grapes of Wrath were not exaggerated. As a youngster, Jerry Oberwager had hitchhiked to Washington DC and camped on the Mall, where he was awoken by Mrs Roosevelt while she was on horseback.
Posted by Robert Messenger at 12:06

Aw Robert! What a story!

We are in the presence of a one hundred percent solid-gold Jen You Wine Investigative Journalist with a right real handy knack of puttin' them words in right seemly order.


I'm a gonna Wreck Oh Mend ewe four one of them there Poo Litzers!

Wonderful research and compilation of so many threads. Thank you.