Bringing the Typosphere Together, Nine Years On

I was delighted to be invited by Portland, Oregon, blogger Bill Guthrie (The Typewritemosphere) to take part in a series of Question and Answer interviews he has been conducting. My responses to Bill's 12 questions are here.  Also taking part in Bill's series, "A Typer's Dozen", have been Richard Polt and Joe Van Cleeve, and I believe we may soon hear from the irresistible Ted Munk. Between Bill's work on this series, Jonathan Posey's insightful podcasts and David Brechbiel's wonderful work on the Virtual Herman's Zoom presentations, the pandemic seems to have somehow joined forces with our typewriter passion to bring the worldwide Typosphere even closer together. The efforts of Jonathan, David and now Bill have made it an astonishing few months for me, all the more so because of the periods of isolation we have all had to endure. 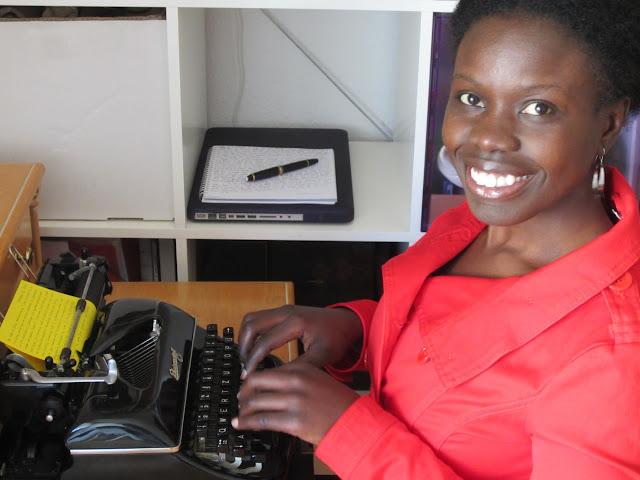 It seems light years now since Richard Polt, in Cincinnati, Ohio, hosted a then "breakthrough" event in which Adwoa Bagalini (above) in Geneva, Switzerland, Peter Baker in Tacoma, Washington, and myself in Canberra, Australia, took part. It was a 40-minute “Hang Out Type-In” on Google+ to mark International Typewriter Appreciation Month, and actually it will be nine years ago this coming February 24. Richard described as a “virtual type-in”, a multi-party video conference that was “a strange and enjoyable sort of event”, and added at the time that we may well look back on it and laugh about how primitive it was. Indeed, we can do that, now that Zoom meetings and Podcasts are the thing. But it was an historic occasion. Little did any of us realise back then just how enormous the Typosphere would become.

Thank you Jonathan, David and Bill. You have brought fresh warmth and conviviality into international typewriter-loving community.

Posted by Robert Messenger at 21:18

You stated some fine answers.
Seems like only yesterday the Typosphere celebrated Typewriter Month. Over the past few years I have not heard it mentioned except a very few times. Same with Typewriter Day.
I'm no help as I've left my blog alone in my quest to move to WP.

Robert, thank you very much for the mention as well as for linking to my blog. It was a real pleasure having you participate in my Q&A series. I am indeed working on Ted's entry now and hope to have it posted soon.

I happily remember that event. We had no clue that a pandemic would force so many screen-mediated meetings.

If there was any good thing to come out of the NCV Quarantine, it would be the fact that quite a lot more people had time and curiosity enough to discover and take up typewriter collecting. Very exciting!
Oh, also - If you're not busy some... ummm... 3am Monday morning according to worldtimebuddy.. geez, that's not a great time for you in AEDT.. anyway, there is a Zoom meeting every 9am Sunday my time where about a dozen or so collectors that meet and talk about typewriter stuff and whatever. See http://typepals.com/

If you're an early-morning type, come and join us sometime. (:

Thank you for mentioning Virtual Herman's and presenting so late into your night. It was a joy to gather the global typosphere together for a weekend of learning, fun, and fellowship. It pleased me to visit and meet many typewriter friends who, due to distance or circumstances, can’t attend the live WV meeting. For this reason alone another Virtual Herman’s in a year or so might be planned.