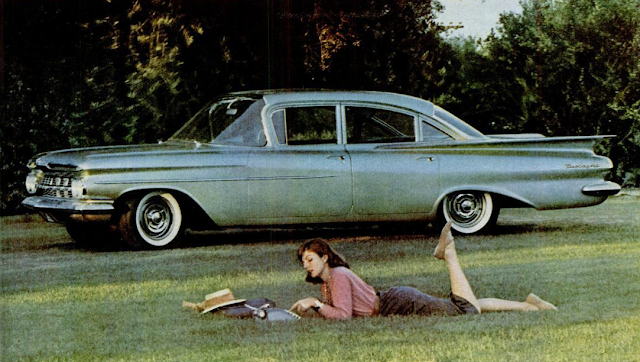 Inspired by comments from Bill MacLane, Richard Polt and Bill Guthrie (I had a couple of Triumph Spitfires in the 1970s too, Bill, but my first car was a Morris Mini), and a thorough analysis from Paulo Dal Cheile, I went looking for more Big Gas-Guzzling Car ads.

I knew that if I dipped back into the late 1950s, I’d find some real beauties. And to my surprise I found an ad which combined both a Big Car and a typewriter – albeit a very small blue typewriter. I can’t make out what it is, but with the white keytops it could be a Olivetti Lettera 22 sold in the US from 1955 as a Sears Tower Courier or from 1956 as a Sears Tower Chieftain. Then again, the Couriers were primarily red in colour. (There is some suggestion they were made in the integrated works in Mexico City by Olivetti Mexicana SA). At the same time, with the higher carriage lever, it could be a Smith-Corona Skyriter, also sold as a Tower Chieftain. I really can’t tell. What I can say is that the massively long car in that ad is a 1959 Chevrolet Biscayne. Like I said in the earlier post, the names alone are synonymous with "BIG" - Pontiac, Studebaker, Cadillac, Chrysler ... 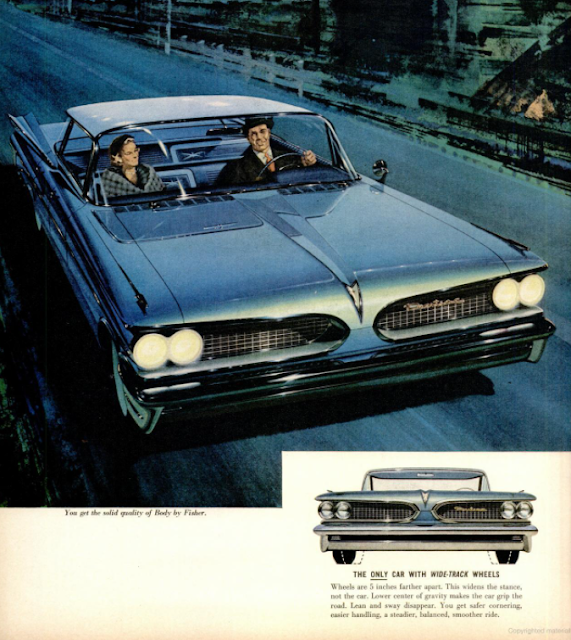 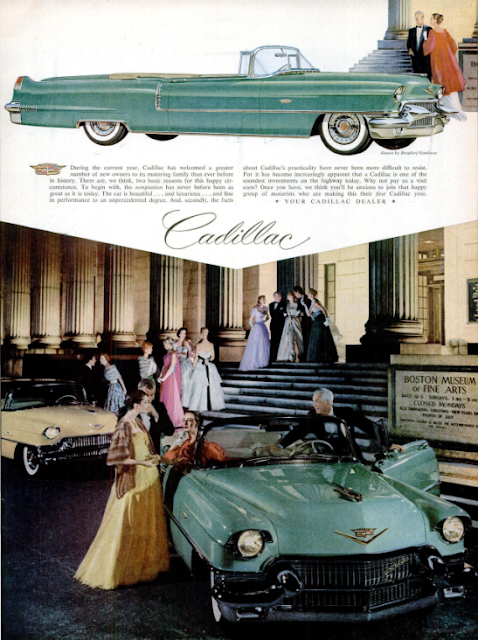 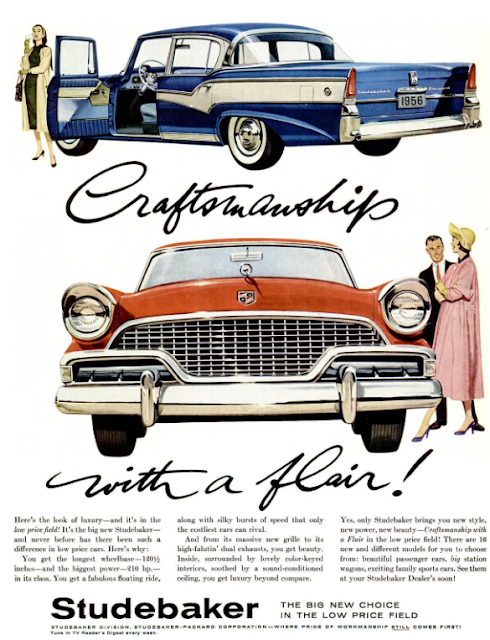 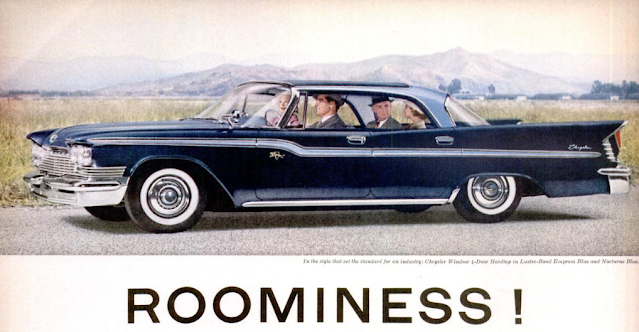 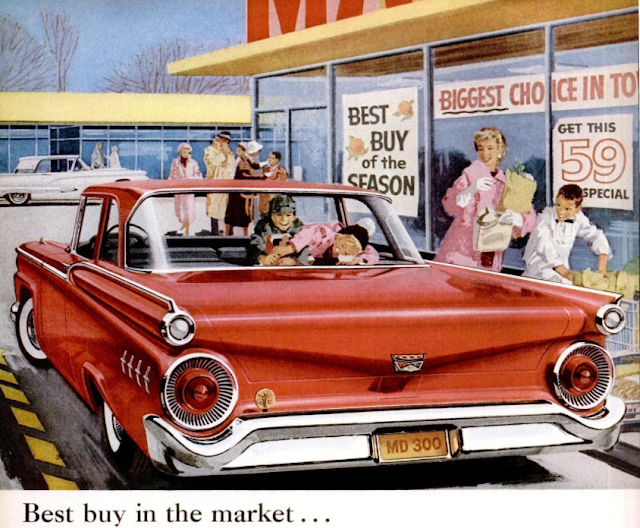 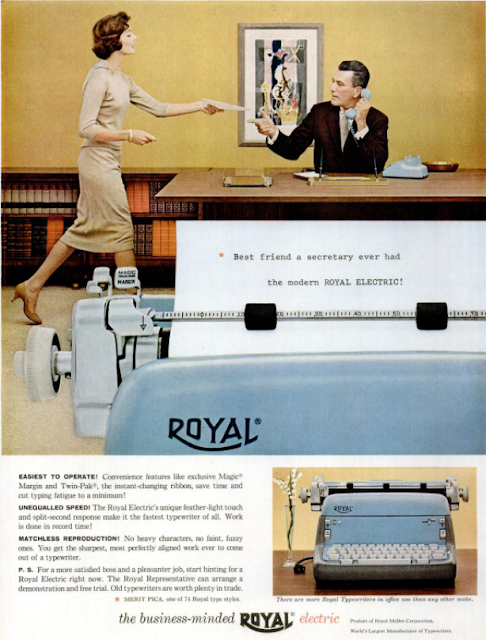 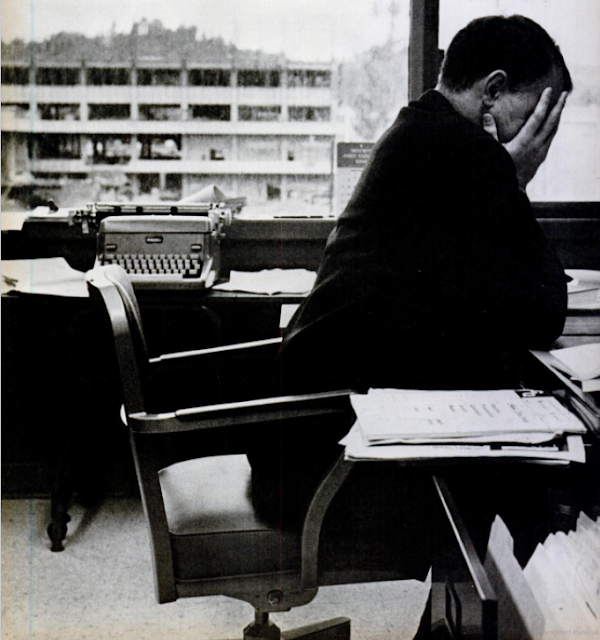 1959 was also a year when the Royal FP standard typewriter was still a “drab blob” (Alan Seaver’s words on his "Machines of Loving Grace" website) – and you can tell by the way this schoolteacher is holding his head in his hands that he’s not happy about that. The Royal Electric in a pastel blue had arrived in 1954, just not at this guy’s school! And then in 1959 there were all those lovely portables, Laird Fortune Covey's Royal Futura in particular, but also the Remingtons, Joe Barkdoll's Smith-Corona 5TE electric portable and the array of Paul Braginetz-designed Underwoods. 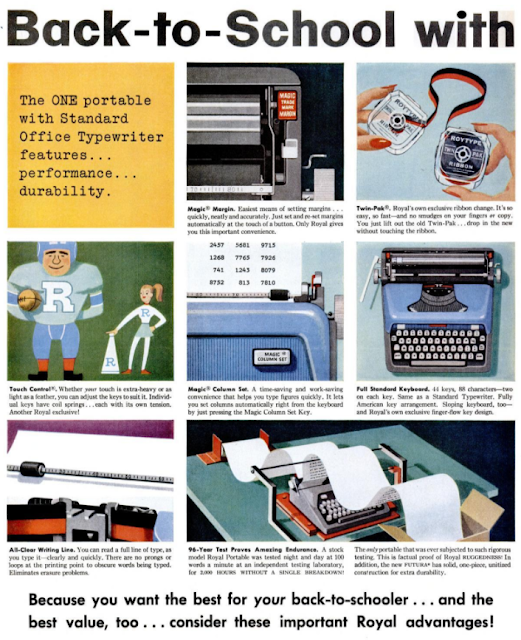 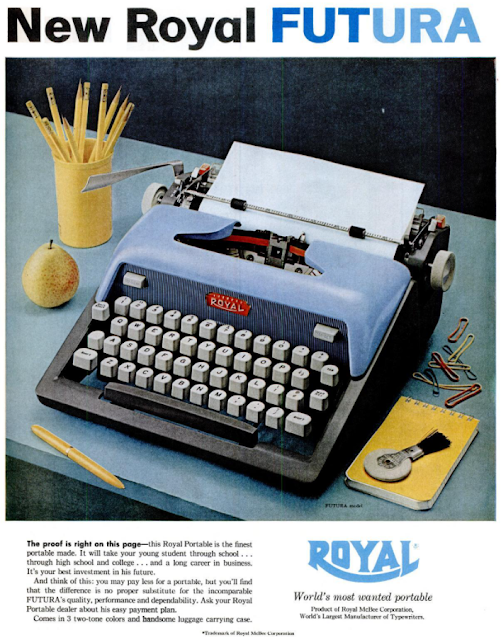 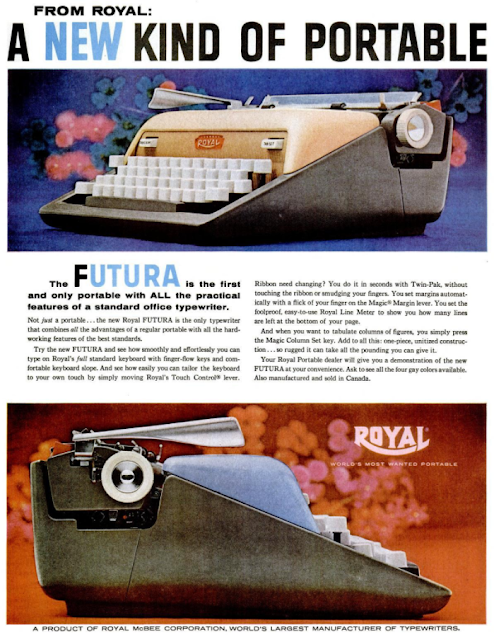 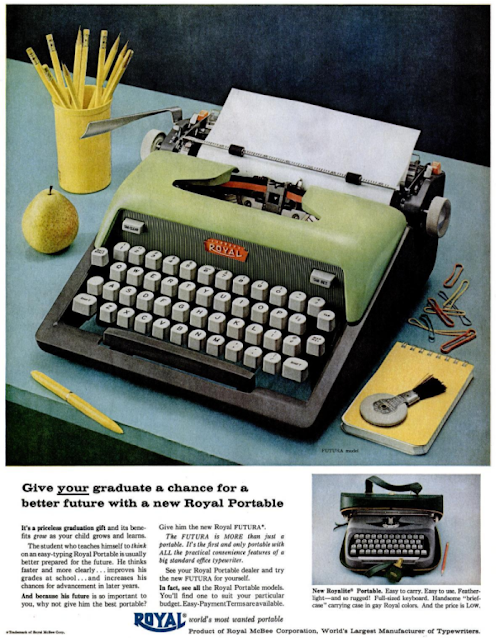 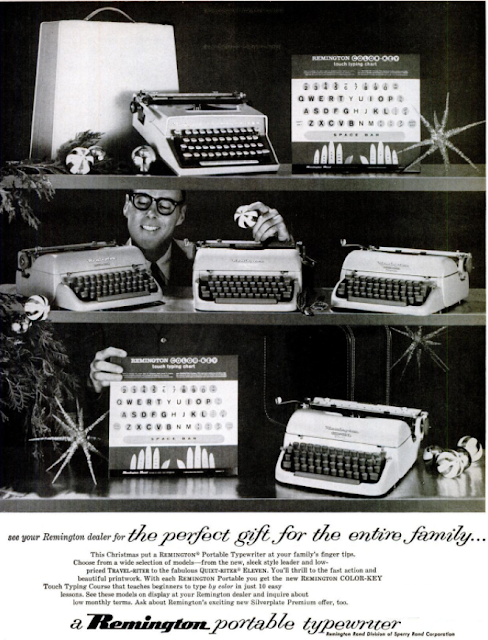 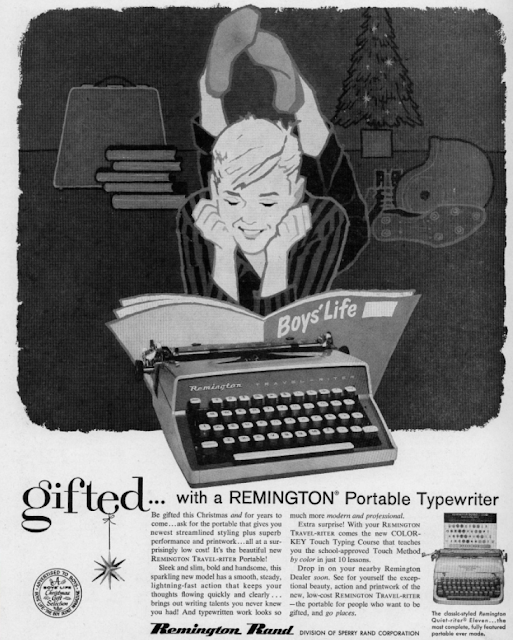 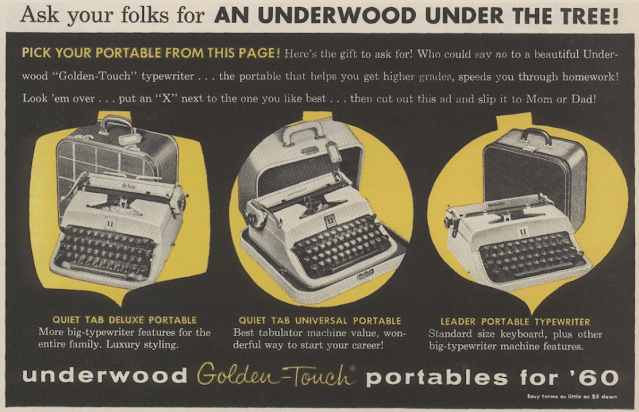 And for the benefit of Bill Guthrie ... 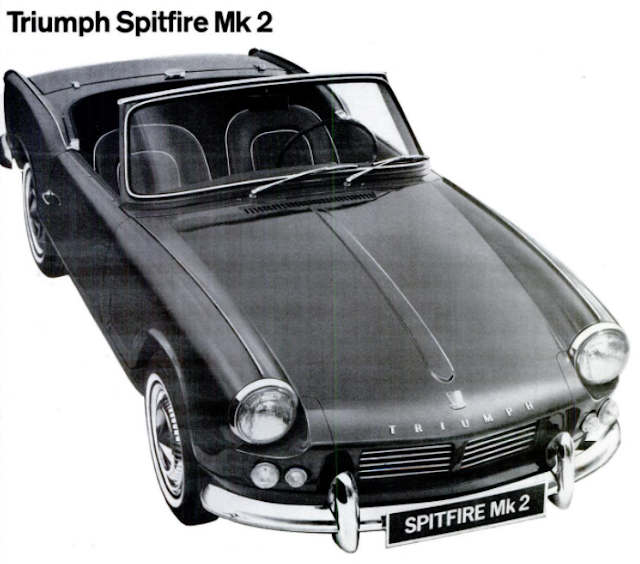 Posted by Robert Messenger at 20:13

Those fine advertisements take me back to my childhood; fancy cars and plenty of typewriters. I miss the comfort and roominess of those big cars. I guess that is why I prefer my truck.
Then, I'd love driving around in a Spitfire!.

Another thing that always stands out to my eye when looking at vehicles from the 50's and 60's in particular are the wide variety of colors that were offered back then.

I like how you brought things to a close with the evolution of cars and typewriters alike as they both began to feature smaller, sleeker designs. Along those lines, it is funny to think that Triumph Motor Co. billed their TR7 sports car as "The Shape Of Things To Come", when clearly Royal had beaten them to the punch with the Futura.

When I first saw that little typewriter in the ad at the beginning of your post, I immediately thought "Cole Steel." Then again, it could be a Royalite (or one of the many similar little Dutch Royals with a bewildering variety of names). That's probably more likely than a Cole Steel, which is pretty rare.

Thank you the two Bills and Richard for your comments.
Now you mention it, the Cole Steel is a definite possibility. I notice there's a pale blue on on the Typewriter Database, and that the Cole Steel was advertised for sale in the US in November 1957, so it's very likely (especially with the lifting carriage lever).
Bill M, Spitfires could be surprisingly comfy!
Bill G, just come across an ad for a 1958 Oldsmobile - WOW! All that chrome!