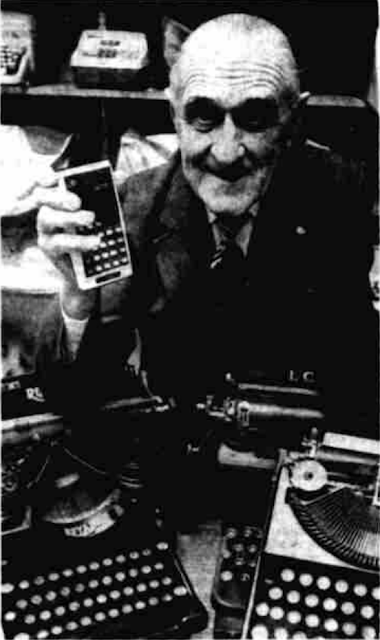 Pinned between the A33 and the B3031 in Reading, the historic market town in the Thames Valley in Berkshire, England, is arguably the oldest extant typewriter business in the world. Admittedly, it no longer deals in typewriters, and changed its business name from Fraser’s Typewriters to Frasers Office Supplies, dropping the possessive apostrophe as well as the typewriters, on October 8, 1993, after 74 years of selling and repairing typewriters. Still, it continues to be a Fraser family business, one now jointly run by the direct descendants of founder Arthur Riddell Fraser (1891-1985). And as far as the Frasers are concerned, it is the same outfit that Arthur started on July 1, 1919, though from an initial budget of £17 and 6 shillings it now has annual revenue in excess of £2.8 million. 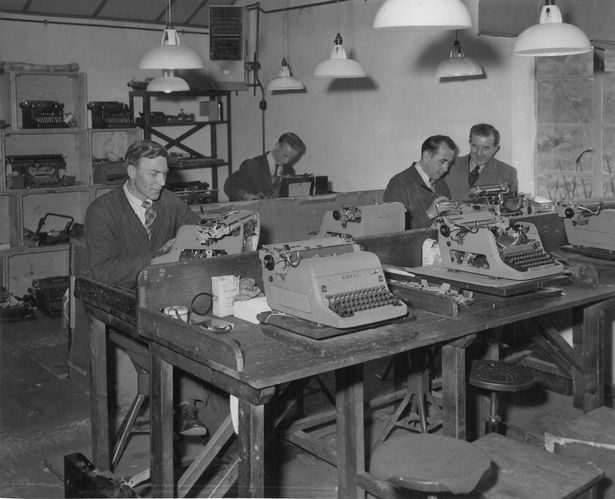 Arthur himself started in the typewriter trade in Manchester as a 14-year-old on February 19, 1906, earning 10 shillings a week, and continued in it until he retired in 1985, a stint of an astonishing 79 years. 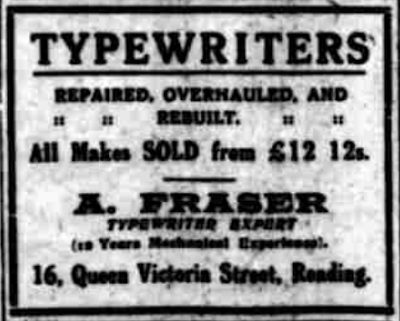 Arthur's 1919 advertisement
Arthur’s first business address was 16 Queen Victoria Street, Reading, a pedestrianised thoroughfare wedged between the King’s Road and London Road, and an appropriate address given Queen Victoria Street was once London’s “typewriter row”. Arthur advertised himself as a “typewriter expert” with 13 years’ mechanical experience. He sold all brands, new and rebuilt, starting at 12 guineas, as well as carrying out repairs and overhauls. Within 18 months of opening his business, Arthur had the sole agency for the Oliver in Berkshire, Buckinghamshire, Hampshire and Oxfordshire. Before his company moved to its present address at 7 Arkwright Road, it made many moves, including briefly to 89 Broad Street in 1929. For 44 years from 1934 Arthur was based at 5 Blagrave Street. Arthur’s son Gerald (1920-) joined the firm that same year. Before the present address, there was another move, to 135 Cardiff Road, then in 2011 the last shift to Arkwright Road.

In a page 4 picture story in the Reading Evening Post on February 13, 1981, the Post labelled Arthur “the king of typewriters”. “When it comes to typewriters,” the Post said, “there is no-one alive who knows more about the subject than Mr Arthur Fraser. For next Thursday he celebrates 75 years in the trade, which, he claims, makes him the oldest typewriter man in the world. He will be 90 in April but he still goes into [his] Blagrave Street offices every day, to advise or to lend a hand.” In 1969, marking his company’s 50th anniversary, the Post had merely called Arthur the “grandfather of the typewriter trade in Great Britain” and “one of the oldest typewriter men in the world still fully active”. 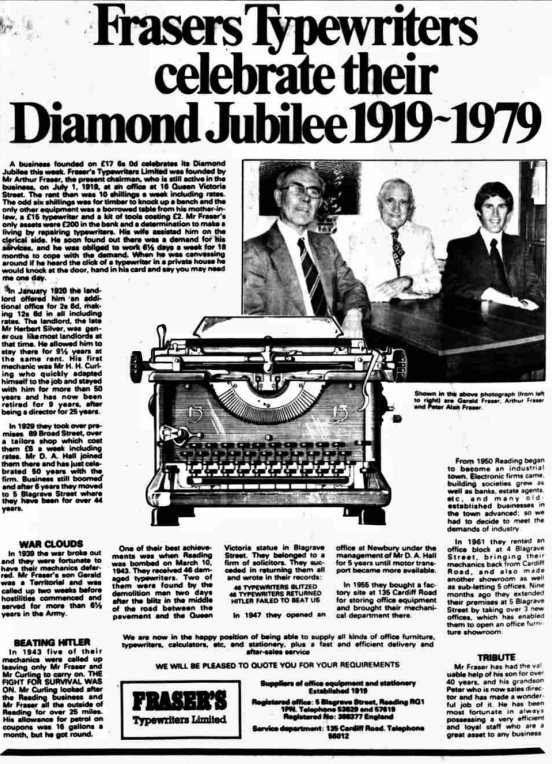 Arthur was born in Manchester on April 16, 1891. From November 1914 he served as a mechanic with the Royal Flying Corps. After World War I he moved to Reading and in July 1918 married May Elizabeth Hamblen. It was from his wife’s mother, Sarah Ann Hamblen (née Martin), that Arthur borrowed a table for the first typewriter, worth £15, that he took into his Queen Victoria Street office. Arthur’s opening budget was £17 six shillings. He had to pay 10 shillings a week rent and rates for the company headquarters, and from what was left over after living expenses he bought £6 worth of timber for benches and tools worth £2. But the business took off and Arthur worked six and a half days a week for the first 18 months to meet the demand for his skills. Mrs Fraser was company secretary for 36 years. Arthur took on an assistant mechanic, Herbert Henry Curling (1903-1986), who stayed with him for more than 5o years – after 25 years Arthur made Herbert a co-director. Herbert retired in 1970. Douglas Ashley Hall joined Arthur and Herbert in 1929 and retired in 1984. Hall’s grandson, Nicholas Ian Clark (1968-) joined in 1985 and is now one of Frasers’ co-owners. 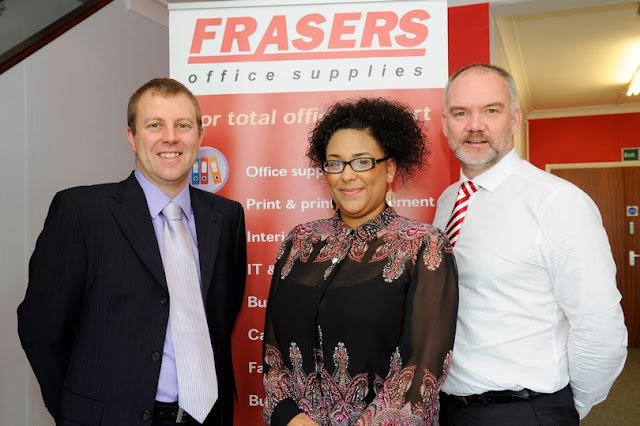 Arthur's great-grandson Alan Fraser, left, with co-owner
Nick Clark, right, and apprentice Chante Edwards
Second World War service took Gerald Fraser and a number of trained mechanics away from Blagrave Street, but Arthur and Herbert trained two women and three boys to carry on the company’s work. When Nazi bombers targeted Reading on the night of February 10, 1943, the “casualties” included 46 typewriters, two of which, from a law office, were found buried in debris in the middle of a road by demolition workers two days after the raid. Arthur later recorded, “46 blitzed typewriters returned. Hitler failed to beat us.” Indeed, business had become so brisk by then that Arthur made Fraser’s Typewriters an incorporated private limited company on January 23, 1944. The company started a profit-share scheme in the 1950s. Arthur’s grandson Peter Alan Fraser (1947-) joined the firm in 1965 and Arthur’s great-grandson Alan Paul Fraser (1974-) is now a co-owner of Frasers. 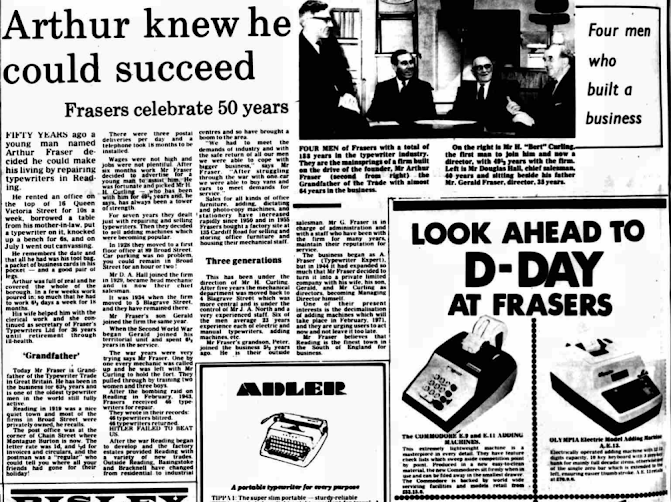 Posted by Robert Messenger at 10:16