When the Clacking of a Typewriter Stopped a Davis Cup Final 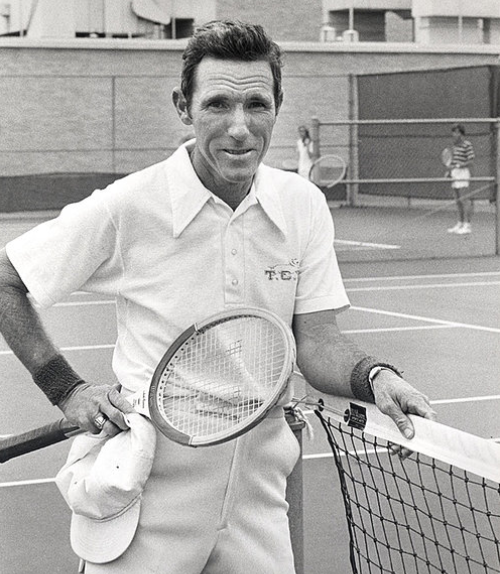 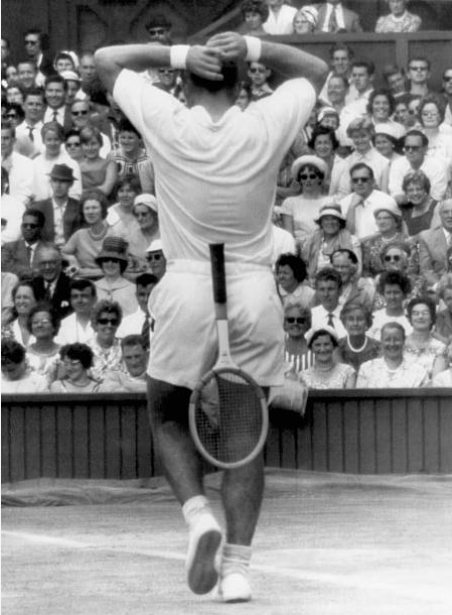 Chuck McKinley, fond of letting go of his racquet, made
an ass of himself in the Davis Cup Inter-Zonal final.
This was when a good many of Western Australia’s Italian migrants – very few of whom were tennis aficionados - turned up to support their native land in the Davis Cup Inter-Zonal final against the United States. West Australians didn’t rate Italy much of a chance to advance to the Challenge Round, to be played against Australia at the White City Stadium in Rushcutter’s Bay, Sydney, after Christmas, so tickets for the Perth tie were readily available. It seems WA’s very large population of Italian-born residents was quick to snap them up. 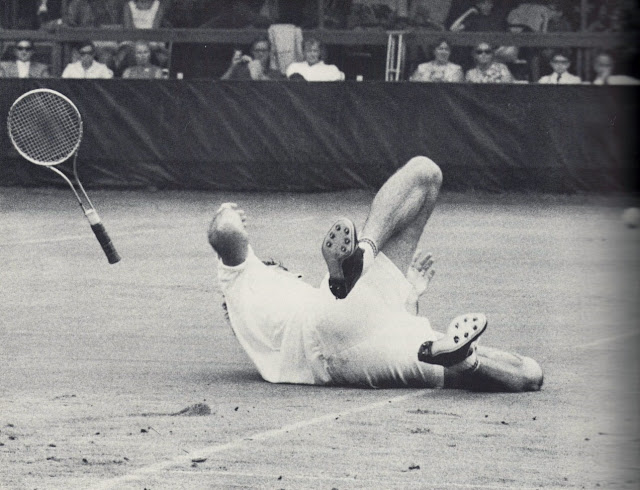 Butch Buchholz and the US team came crashing down to earth in Perth.
The Americans, headed by Butch Buchholz, just turned 20, and Chuck McKinley, still 19, were expected to have no difficulty in beating 32-year-old Orlando Sirola and Nicky Pietrangeli, 27. But the US players had already developed a reputation for brattish outbursts in the Eastern States that Australian summer, and their bad tempered performances were to mar the cup tie in Perth. 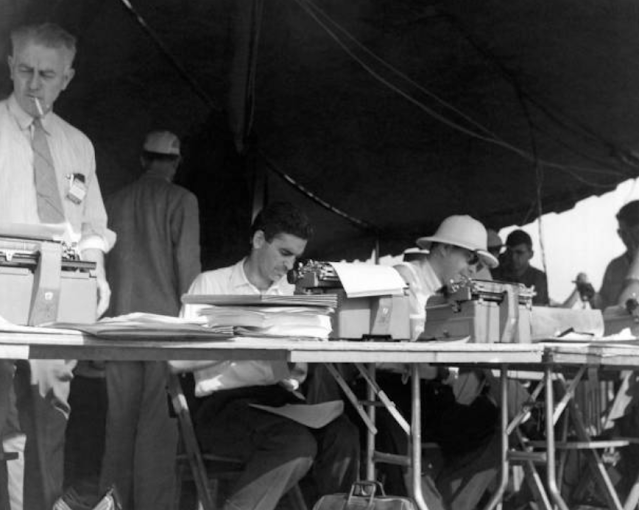 Among other things, Buchholz had shown a penchant for smashing racquets, a petulant act then unheard of in this country. The whole team seemed to have lost a grasp on what Australians took to be “the spirit of the game” - as the Americans were reminded by the referee in Perth, Len Spencer. In the match against Italy, US co-captain, Texan Tut Bartzen, continually stopped play to complain about the clattering of a reporter’s typewriter – that is, until Spencer told Bartzen to shut up.

The Italians in the King’s Park crowd, of course, lapped it all up. Not alone were “their boys” winning – Italy had never previously advanced beyond the semis, and Sirola and Pietrangeli had been whitewashed by the US at the King’s Park in 1958 – but the Americans were seriously losing their cool in the process. If you want to get an idea of some of the fun, there’s a British Pathé segment (voice over from New Zealander Brian Henderson) on YouTube. There you will see McKinley miss a simple dink and throw his racquet into the packed stands, which were more than the width of another court away. It was a mighty toss, and a mighty dummy spit. 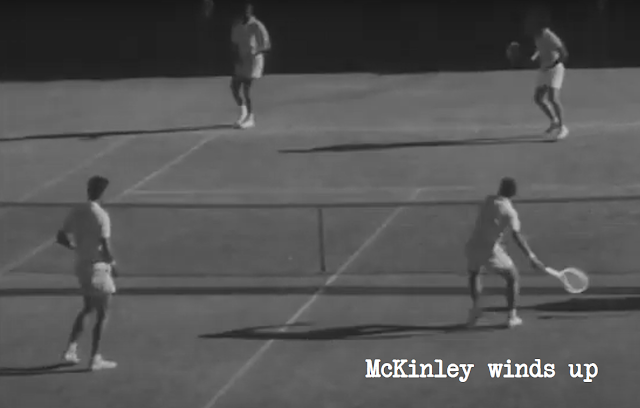 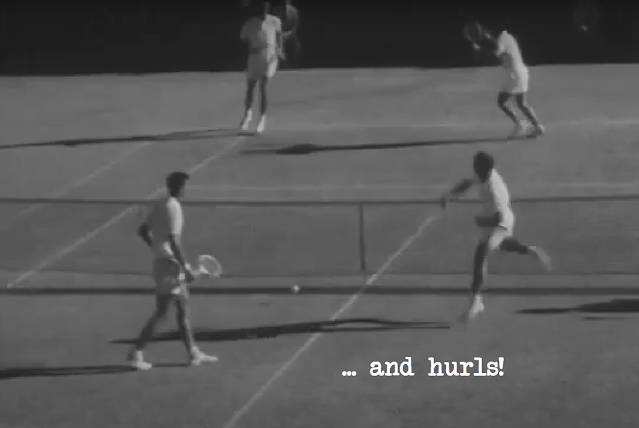 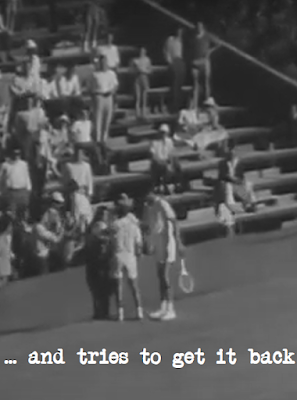 Alan Clarkson in the ‘Sydney Morning Herald’ estimated McKinley’s hurl was at least 45 yards. “It landed in the second row of a group of Italians,” Clarkson reported. “Sirola went [with McKinley to retrieve the racquet] undoubtedly fearing the Italians, excited by the win, would try to harm McKinley.” An Italian spectator refused to give McKinley his racquet back, but eventually handed it over to Sirola. Clarkson went on, “Excited Italians in the crowd repeatedly had to be asked to keep quiet as they barracked enthusiastically for their countrymen.” The crowd was “at fever pitch”. 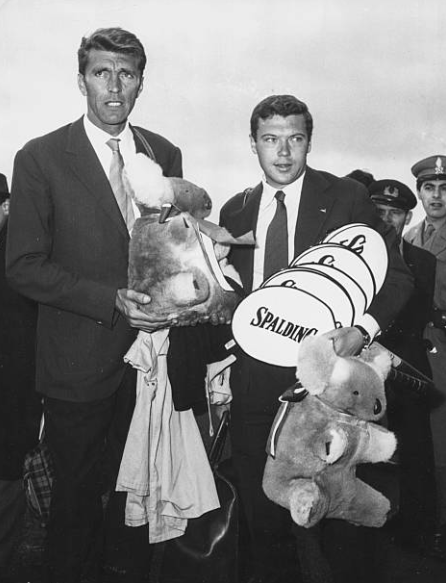 Sirola and Pietrangeli return from Australia in January 1961 with their spoils.
Sirola and Pietrangeli beat Buchholz and McKinley in the doubles 3-6 10-8 6-4 13-11 and Italy went on to take the tie 3-2. The Americans had completely lost the plot and in the reverse singles Pietrangeli beat Buchholz and Barry MacKay, at 25 the senior US team member, lost in straight sets to the aging Sirola. A very chastened and chastised McKinley was left to cool his heels, but WA journalists were convinced considerable damage had been done to the US locker rooms – the reporters were refused entry to confirm their suspicions.

WA Lawn Tennis Association Ken Miller summed things up afterwards when he said the Americans “needed a smart kick in the pants, Buchholz in particular”. It was clear that David Freed, then 51 and only that year appointed US team captain, had lost control of his young charges and a year later was relieved of his duties. 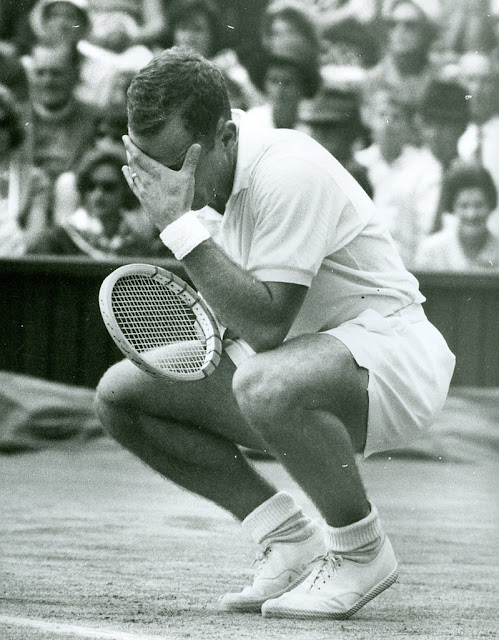 Chuck McKinley regrets.
It turned out there was an underlying factor in the desperation and disappointment shown by the Americans at King’s Park. At the time it was tennis’s worst kept secret that Buchholz and MacKay would sign professional contracts with Jack Kramer immediately after their Davis Cup commitments were completed – indeed, they were already headlined as playing in professional events in Auckland and Christchurch early in the New Year. But the sign-on figure would be impacted by their cup efforts, and of course they eventually had to accept money that was way below what they’d hoped to be paid to turn pro. On December 21, while Pietrangeli continued to ponder $50,000, the two Americans signed for a minimum guarantee of half that amount over three years.

McKinley, once described by English sportswriter John Lovesey as looking “less like a tennis player than a wirehaired terrier trying to catch a rat”, was on December 31 suspended by the USLTA for his record racquet throw. The suspension ended on May 26 and six weeks later McKinley played Rod Laver in the Wimbledon men's singles final, losing in straight sets.
Posted by Robert Messenger at 16:45