Here's To You, Nancy Robinson, and Your World Typewriter 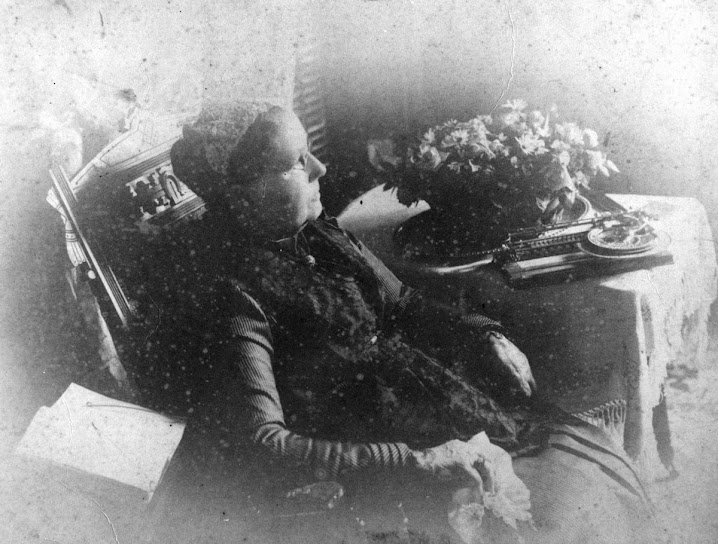 This must surely be one of the earliest photographs of someone with an index typewriter. The lady with the World by her side is Nancy Robinson Miller. At the time of her death, aged 85, in Sacramento on February 15, 1894, she was one of the richest women in California. Her estate was valued at $145,000, which translates to $4.8 million today.

Mrs Miller had accumulated that money through her late husband, Henry Miller (1806-1878), one of the two men to whom Darius Odgen Mills sold a third share in Mills’s bank in 1862. Mills (1825-1910) was at one time California's wealthiest citizen, the result of wise investments accruing, by November 1849, in $40,000 from the California Gold Rush and the establishment of the Gold Bank of D. O. Mills & Co. By the time of Nancy’s death, her son Frank had gone on to be president of the Mills Bank.

Nancy Robinson was born at Roaring Brook, Connecticut, on May 6, 1808. Her father died when she was 18 and she moved to Rome, Oneida, New York, where she met and married Henry Miller in 1830. The couple settled at Farmington, Michigan, and later Milwaukee, before moving to California. 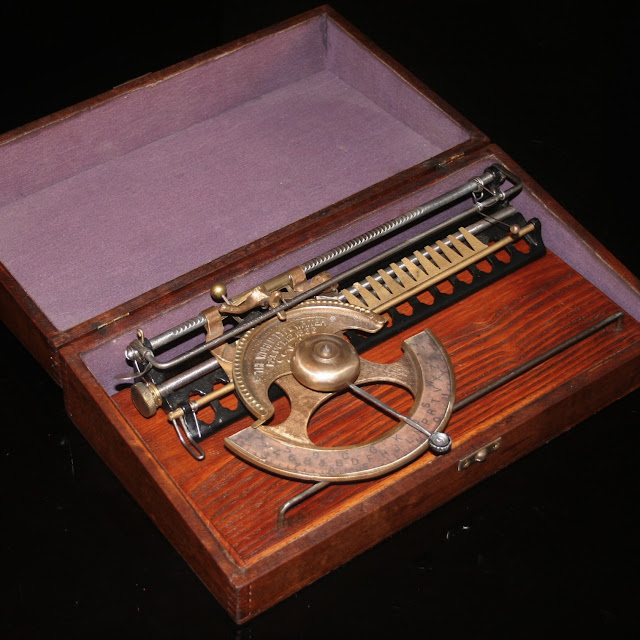 The World typewriter emerged from Typewriter Improvement Company of Portland, Maine, in  1887 and production later switched to the Pope Manufacturing Company’s factory in Boston, home of the typewriter’s inventor, the engraver, designer, toolmaker, die sinker and jeweller John Becker. Two of Becker’s brothers, George - a Providence, Rhode Island, jeweller - and Philip became involved in the design, production and sales of the World. Philip later manufactured the Simplex index typewriter and was president of the Simplex Lithograph Company. 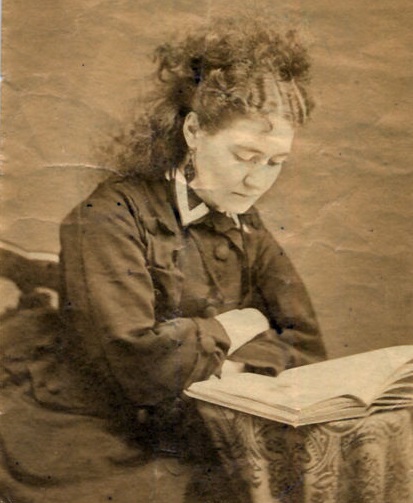 John Becker was born in Marburg, a town north of Frankfurt in Germany, on May 9, 1850, and arrived in America as a young child. The family settled in East Boston. By the time of his death, at the age of 77, in Hollywood, California, on May 20, 1927, Becker’s creation of the World typewriter was long forgotten and he was only remembered for inventing the Becker vertical milling machine – a somewhat larger item than the Becker typewriters. 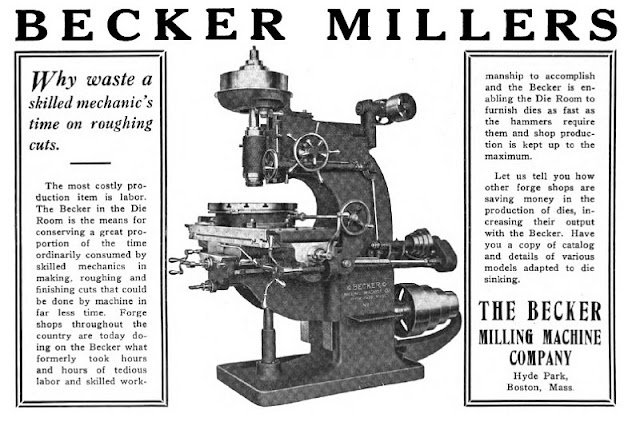 Becker moved to Hollywood from Hyde Park, Boston, in 1919, leaving his Massachusetts manufacturing concern, Becker Milling Machine Company, in other hands. He had become a skilled engraver and toolmaker at school and later applied these arts in East Boston and Fitchburg. In 1913 former Massachusetts Governor Eugene Foss took over Becker’s plant and consolidated it with the Brainard Milling Machine Company at Hyde Park. During World War I it was taken over by Robert T. Herrick, and Becker sold his interest before relocating to California. 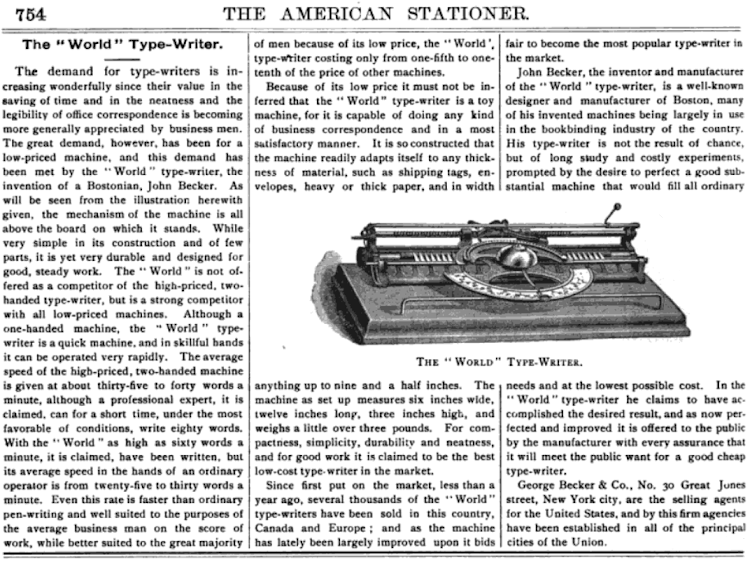 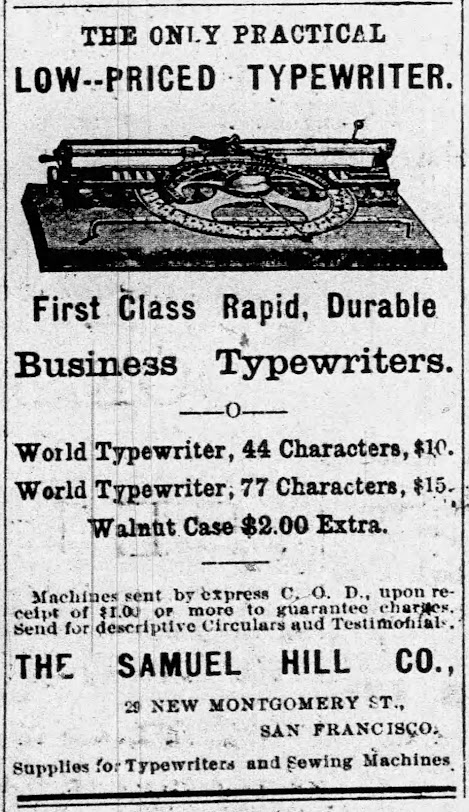 The World was being sold in California by 1889, five years before Nancy Miller died. 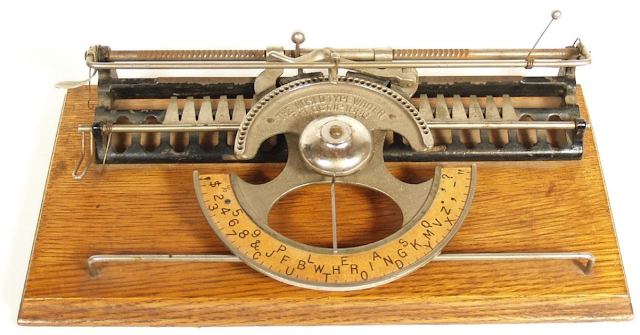 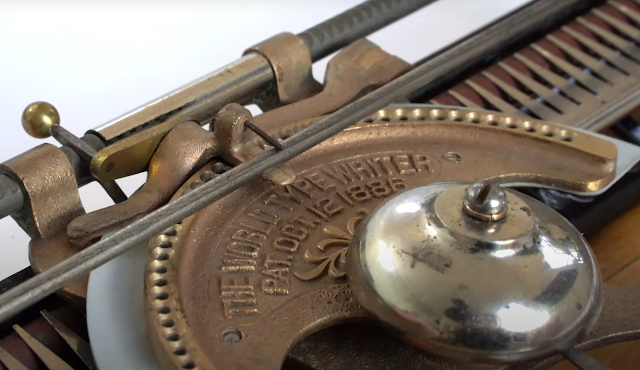 Posted by Robert Messenger at 19:53