Billy Rempfer: Ultimately Subdued by the Thunders of Silence 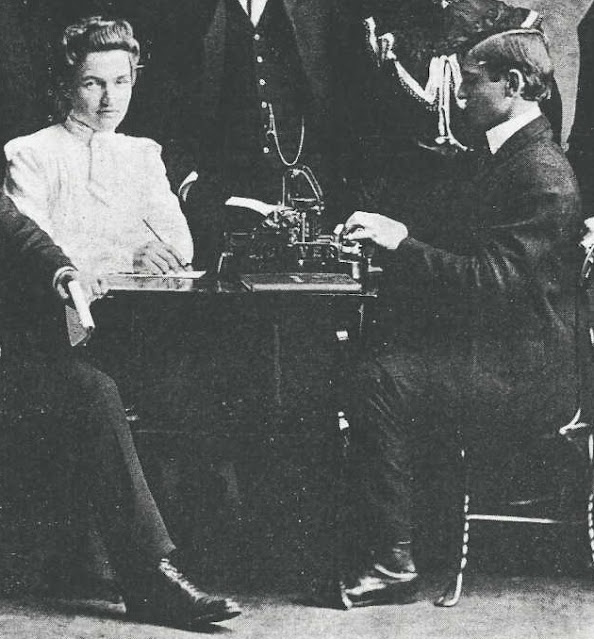 The fellow at the Oliver typewriter is William Christian Rempfer, an interesting cove who at various times was a socialist, a pacifist, an anti-conscription campaigner, a debarred attorney, farm labour organiser and for most of his life a bank president. Sounds a bit Jekyll and Hyde-ish, doesn’t it? A real mixed bag. 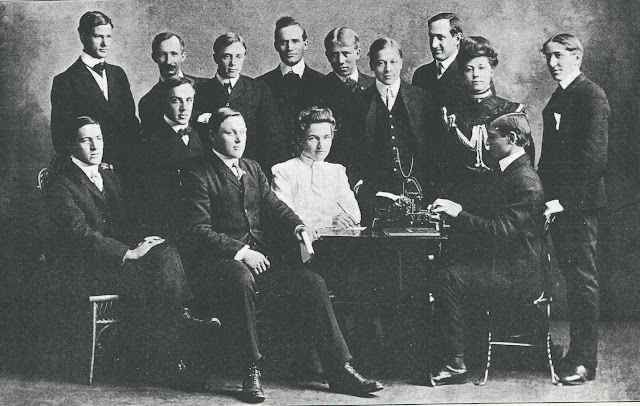 Billy Rempfer, as he was known when he attended the Dakota Wesleyan University in Mitchell, South Dakota, is seen here as part of the university’s shorthand and typewriting department, under instructor, Michigan-born Alice Moshier (1882-1965). The ambition of those in the department, according to the university, was “to become proficient enough to take the inspiring, instructive, indispensable, revised and reversed chapel speeches”. Apparently Billy was an orator of note. 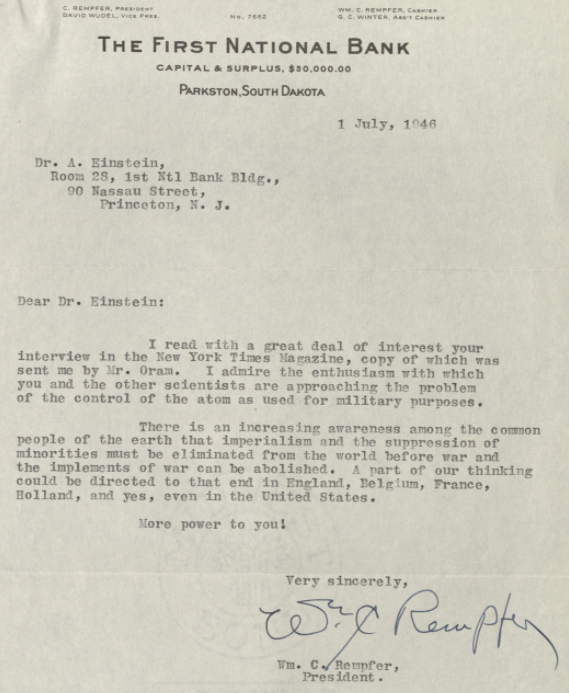 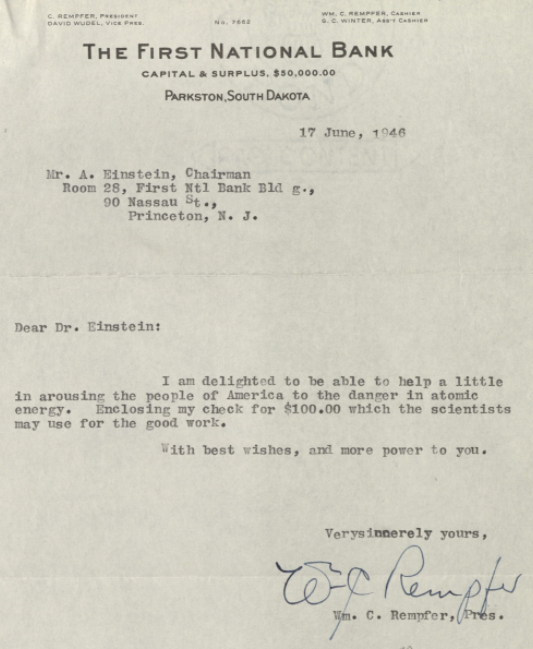 Billy used his typing skills in later life, too, to write encouraging letters to such notables as Alfred Einstein and the sociologist, socialist, historian, civil rights activist, Pan-Africanist, author, writer and editor William Edward Burghardt Du Bois, ending them with the words, “More to power to you”, a phrase usually associated with the Irish. 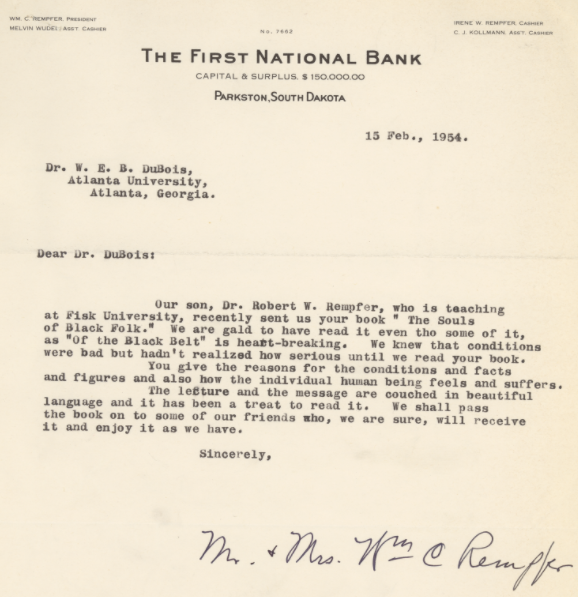 At the Dakota Wesleyan University, Billy was a member of the Daedalian society – a university group aligning themselves with the ingenious, the intricate, the cunning, the artistic and this skillful. In his case the yearbook said he had “beautiful pronunciation in French and German”. He was actually of White Russian stock. Billy was also a footballer and a champion tennis player. 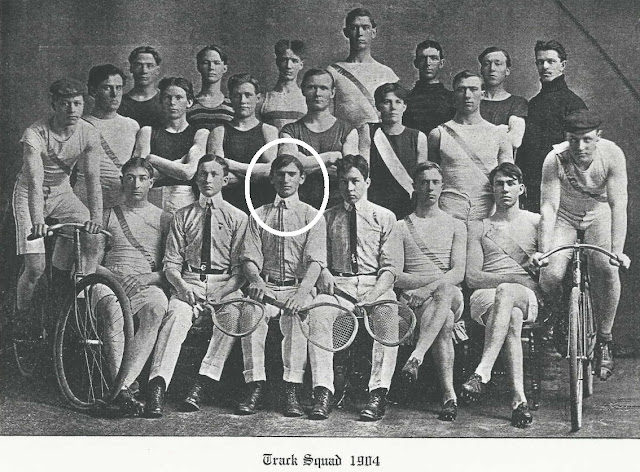 Billy was born (on April 28, 1886) and died in Parkston, Hutchinson County SD, which doesn’t suggest much in the way of broad experience. But he did travel far and wide, including to England on the Europa in 1935. From 1903-05 he served the South Dakota legislature as bill clerk and house journal clerk and in 1907 became assistant secretary in the senate. At the same time he graduated with a BA from the Dakota Wesleyan University, going on to the School of Technology in Boston and then Harvard, where he studied law and graduated cum laude in 1910. From that year until 1955 he was with the First National Bank of Parkston, first as a cashier and later as president. Also in 1910, Billy was admitted to the bar in South Dakota. He served as a Hutchinson County judge from 1919-23 and state attorney of the county from 1923-25. 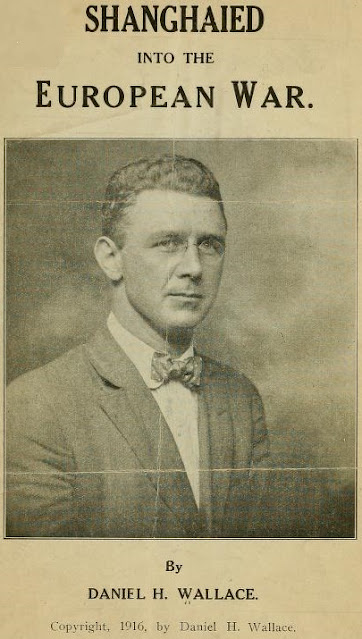 Billy’s leanings toward the left had become widely apparent by 1916 and in 1918 he defended the group of Hutchinson citizens who were charged with violating the espionage act by discouraging enlistments. This concerned the distribution among them of a League of Humanity book through the Industrial Workers of the World headquarters in Chicago. The book, by Daniel H. Wallace of the American Truth Society, was called Shanghaied Into the European War, and its sentiments signalled Billy’s opposition to Woodrow Wilson’s conscription plans.

In Billy’s case, it seems his position with regards to the US becoming embroiled in World War I was misinterpreted as a pro-Germany stand. And this didn’t make him especially popular in parts of North and South Dakota, where there were towns with names like Scotland. Billy, as executive secretary of the South Dakota branch of the People’s Council of America for Terms of Peace, was run out of a town ironically called Freeman, stymied in Sioux Falls and kidnapped and railroaded out of Mitchell. 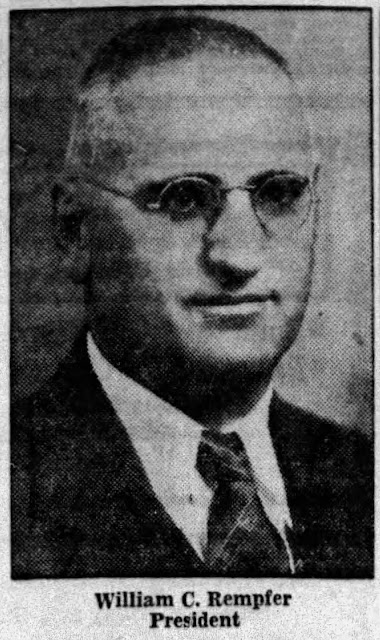 Among the items on his platform were free speech and free press, topics which have parallels today. In February 1918 The Aberdeen Daily News said Irvin Shrewsbury Cobb’s Saturday Evening Post piece “The Thunders of Silence” was applicable to Billy – that he should have been made the victim of a conspiracy of silence and ignored by the press. “What would become of William C. Rempfer of Parkston if the newspapers of South Dakota and of nearby towns in other states ceased to mention his caperings in behalf of the People’s Council for Democracy and Terms of Peace?” Certainly, from that time until his death on April 17, 1958, aged 71, Billy never toyed with controversary again.
Posted by Robert Messenger at 21:05