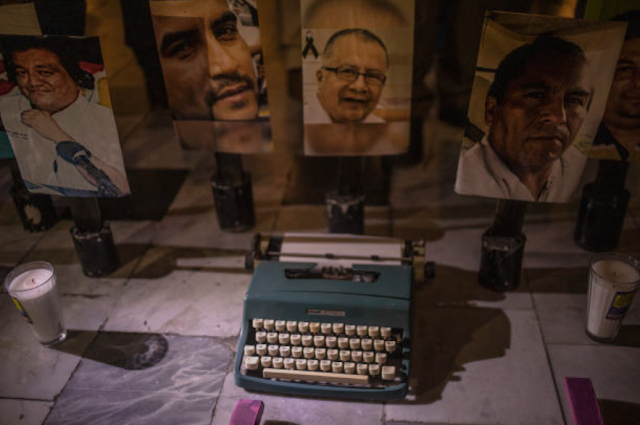 An Olivetti portable typewriter has once more featured in protests in Mexico over the killing of journalists. This photo was taken in the Zócalo, the main square in central Mexico City, where journalists from the state of Veracruz in eastern Mexico displayed images of murdered colleagues. Last Tuesday Mexican journalists started nationwide protests to denounce the murders of three reporters, demanding an end to impunity that has often characterised the killings of their colleagues. The protests follow the murder of seasoned journalist Lourdes Maldonado last Sunday, some three years after she raised the issue of killings with President Andres Manuel Lopez Obrador and said she feared for her life. Protesters in the central state of Puebla laid flowers and candles on the street along with signs that read “I'm angry at censorship”, while in the northern state of Chihuahua protesters scrawled on a wall “Journalism is a risk” and drew the face of Maldonado. Israel Ibarra, president at a Baja California communications college, said if government and society failed to act they would be “complicit” not only in the murders of Maldonado and others but “the murder of freedom of expression in Mexico”. Mexico is one of the world's most dangerous countries for journalists, and 145 have been killed between 2000-2021, according to Article 19, an advocacy group.

Reporters also held a vigil in the Journalist's Square in Ciudad Juarez and in Veracruz after the Mexican journalist networks voted to stage the gatherings, which coincides with online protest campaigns. “It is matter of urgency that state and federal authorities prevent attacks, protect journalists when they are victims, and investigate crimes committed against the press with due diligence," Article 19 said.

Maldonado's murder in the northern border city of Tijuana, where she worked for many years, followed the killings of two other Mexican journalists this month. Lopez Obrador, who has been criticized for not doing more to protect reporters, said his government would investigate and “clear up this crime to prevent further murders of journalists”. Critics say Lopez Obrador has failed to deliver on pledges to reduce violence, combat deeply entrenched organised crime, or reduce impunity. The president says crime and violence are the products of chronic corruption and inequality. 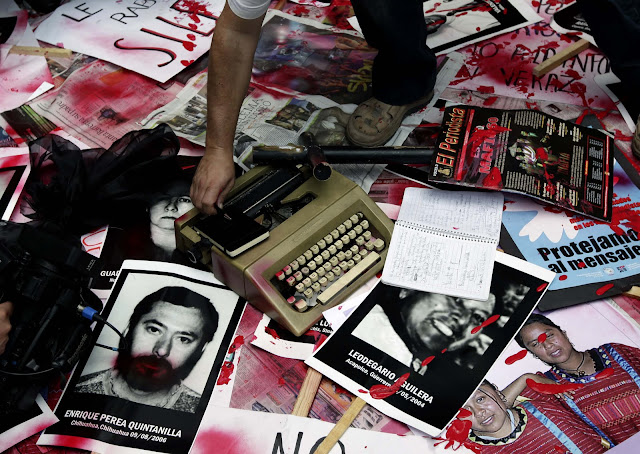 An Olivetti portable typewriter was used in a similar protest in August 2010, after the abduction of four journalists by the Pacifico drug cartel to demand television stations broadcast a video linking the Durango state government to a rival drug gang.
Posted by Robert Messenger at 12:21

had read how her dog, a rescue, was waiting at her front door two days after her murder. sure hope somebody came to take him to a new and loving home. photos with yellow police tape.

this journalist killing stuff in mexico is an enormous issue and it gets zero play in the usa because we're too busy being offended by idiot fascists or neoliberal corporatists in the media's culture war propaganda scheme to obscure attention of the reality that class warfare is enslaving us, whomever is in charge.

they're ahead of us in mexico with government corruption. they are where the usa will be in a few years.

I find this reality from my country pretty disappointing and embarrassing. To me, it's a shame that Mexico be known because of its high rates of violent censorship and suppression.

Being ruled by a dictatorship that started since the early times of the "Mexican revolution" (1910-1921), after this, being sabotaged by a well known series of countries and people over here. The government of the PRI (Institutional and Revolutionary Party... a contradictory name, specially because it's a fascist, neo-liberal party into corporatism, pretending to be "democratic") became corrupt and evil as time went forward. But violent suppression started in 1968, when college students were murdered in Mexico City on October the 2nd. From then on, there is a "dirty war" (that's how journalists and scholars call this) from the PRI against any kind of opposition and dissidence. Actually the statistics about how many victims of the PRI exist are obscure (intentionally, by the way; the PRI is even worse than Nazi Germany or fascist Italy), but it's believed around 100 thousands of people have been "disappeared" by the PRI partisans and supporters.

Note: The reason for which those journalist end up "disappeared" is because they are revealing hideous pacts between the PRI, the PAN and the PRD (the other three Mexican parties), the drug-dealing cartels and certain well-known agencies of security abroad (I can't give names at the moment), or them, being part of everything at the same time.

Side notes: The Olivetti typewriters are the most common ones here in Mexico. Specially the Lettera 32 and Lettera 25. After them, the Lettera 31, 35 and 22 (the 22 is actually a little bit harder to find). Then, the Studio 44, 45 and 46 are the most common and well-known models (I have the Studio 46, whose design I find great). And finally, the sort-of rare, hard-to-find Linea 98. The Olivetti Linea 98 is not as common as the Lettera models because the Olympia SG-3 still is the mainstream typewriter. Also, Lettera models, since most of them were made in Mexico, are well known because of their flaws: Letters can't be properly aligned, gears will fail sooner or later (they are super cheesy, bland and flimsy), and, despite their attractive designs (Lettera 25 is an exception, though; nobody likes that weird tone of... brown?), their typeface is lame and boring, and super common, unlike the huge Olympia, which used to include interesting and innovative typefaces sometimes. Their most evident defect is the lack of the "!" sign (and the reason which huge Olympias were always preferred, putting aside the fact people over here associated the brand with all those defects, and that's why Olivetti Linea 98 is sort of rare over here).