H. Allen Smith, his Oliver Typewriter, and Getting ‘Stranded on the Davenport’ 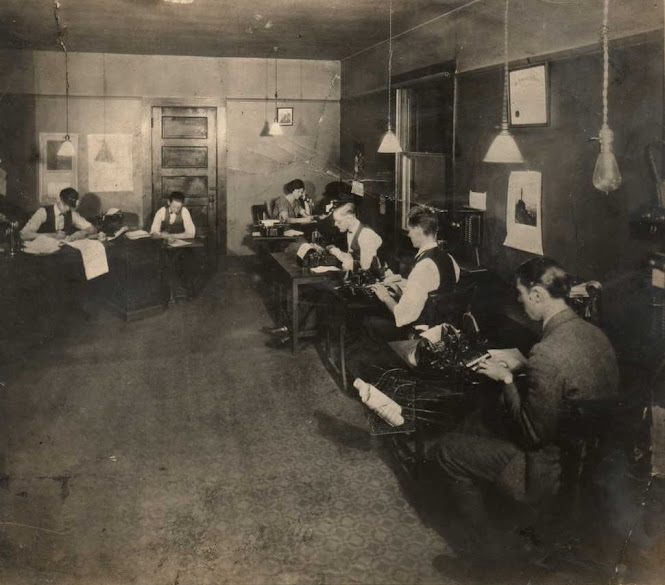 H. Allen Smith, second from right, at an Oliver typewriter in the newsroom of the Huntington Press in Indiana in 1923. It was on just such an Oliver in the Press office that one Sunday evening in early 1924 Allen Smith wrote his "Stranded on a Davenport" story, the one that resulted in him being charged in court with writing 'obscene literature'. In this photo, on the far right, below the naked lightblub, is George Donnelly 'Don' Sullivan (1902-1975), whose designs on Allen Smith's older sister, Jean Elizabeth Smith (1901-1990), led to him getting Allen Smith a job as a reporter on the Press. Don and Jean were married in 1928 and Don went on to make a name in journalism in his own right..
Sitting at my desk at the back of Miss Crumpton’s fourth-form English class, I watched as Pauline Williams in the front row leaned to her left and surreptitiously handed Georgina Nielsen, the girl beside her, a sheaf of yellow paper. My heart was pounding. As much for Pauline – she who’d never been kissed - as the thought that she might as well have been passing along my death warrant. Had Miss Crumpton spotted the exchange, she would undoubtedly have asked to see the document. And at the very least, I figured, that would have led to me being expelled from Greymouth High School. Worst still, to me having my Underwood Universal portable typewriter confiscated by my parents – or the police - and being the subject of a small town salacious scandal, satisfying the demands of a municipality of gossipmongers for months ahead. 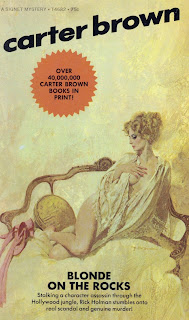 The yellow sheets contained the latest in my series of novellas about the MI6 spy Anthony Marks, 005. These exceedingly juvenile works, inspired and completely informed by Carter Brown pulp fiction and James Bond movies – where else would I have found such ideas? - were typed on the Underwood at night in my bedroom, stapled together and taken to school for the benefit and lurid imaginings of my equally sex-starved classmates. Pubescent virgins and bull virgins, each and every one of us. That none of my novellas ever fell into the hands of an adult, teacher or parent, continues to be regarded by me, these 59 years later, as something of a minor miracle. I knew full well back then that the consequences would have been indeed dire, and so as to not push my luck any further I gathered together all the Anthony Marks stories and destroyed them. Being handed from student to student in class, avidly read and absorbed in acts of dissipation by such impressionable young yokels, was a risky business. That the memory of their contents is still firmly instilled in 70-year-old minds was made clear to me only a couple of years ago. 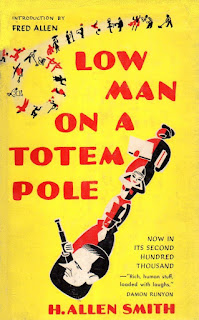 It was during a brief, intemperate but exhilarating period in 1963 that the escapades of the amorous Anthony Marks leaped unfettered – and largely in Marks’s state of undress - from my typewriter on to the paper offcuts – pink, pastel blue and green, yellow – given me at Digby and Phil James’s printery. It all came back in vivid recall when my wife read to me H. Allen Smith’s hilarious confession “Stranded on a Davenport” from the 1954 collection The World, The Flesh and H. Allen Smith, edited by Bergen Evans. (“Stranded on a Davenport” had originally appeared in Allen Smith’s 1941 memoir Low Man on a Totem Pole, under the heading “Newspaper shops, large and small”). The similarities between my dabbling in literary titillation and Smith’s 1924 “odious opus” (as he called it) are striking – except I never got caught and never had to go to court.

Allen Smith’s version of events in “Stranded on a Davenport”, written 16 years after they occurred, is not entirely factual – for one thing, it is set in 1924, when Allen Smith had just turned 16. But it is a wonderful piece of writing nonetheless, and some poetic license is surely justifiable. The original “Stranded on a Davenport” was written in an Indiana newspaper office on newspaper copy paper using an Oliver typewriter, which Allen Smith described as “an instrument as rare in Indiana as the barracuda”, In truth. all the three reporters in the photograph at the top of this post are using Olivers. That said, here are the pertinent details, as outlined by Allen Smith himself in Low Man on a Totem Pole: 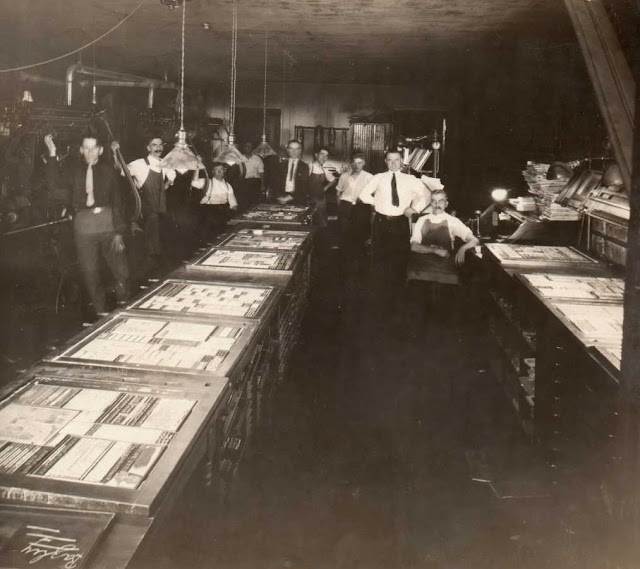 
“I had been employed on the [Huntington] Press for about a year. The Press was a morning daily, and the Herald came out in the afternoon … The Press did not publish on Monday mornings, for that would involve desecrating the Sabbath by working on it – wherefore, the two-story building which housed the paper was closed tight on Sundays.

“All employees carried keys to the shop, however, and it was a Sunday night that Rome Brading [Rome Maurice Brading, 1906-1977] and I wandered into the deserted newsroom with no thought in mind of offending the peace and dignity of the people. Brading was my best friend. He attended the public high school, whereas I had abandoned education on completing the eighth grade at St Mary’s. Brading’s father owned a barbershop on Jefferson Street, and sometimes we would go there late at night, tilt the chairs back and lie in them, talking about the anatomy of girls and other matters.

“On this summer Sunday night Brading sat down at a typewriter and began pecking out a special-delivery letter to his girl (who lived a block and a half from him). Having nothing better to do, I went to work at one of the old side-wheeling Olivers and in about thirty minutes, I knocked out the bawdy screed that was to send me forth into the world, a disgrace to heaven, home and mother.

“I titled it ‘Stranded on a Davenport’, and in length it ran, I should say, close to one thousand words. It was in the first person, written supposedly by a young woman with swivel hips and animal appetites. It described in luxuriant detail the inception, progress and conclusion of an extremely amorous adventure. It was one of those things – well, as Mart O’Malley [Allen Smith’s lawyer, Martin Joseph O’Malley, 1891-1972] told the jury: ‘I’ll venture to say, gentlemen, that there’s not a man among you who never has had such a piece of literature in his possession.’

“I pasted the sheets together and tossed the completed essay over to Brading. He read it and as he read he giggled and guffawed and slapped his lean thighs in the manner of prurient youth. After that we adjourned to Tommy Ellis’ restaurant for coffee.

“By the next day I had forgotten it. Not so Rome Brading. He took ‘Stranded on a Davenport’ to school Monday morning. Somehow it got into the hands of his girl friend, who was studying typing. She made half a dozen copies and distributed them among her female friends, and they made copies, and by the end of the week the thing had snowballed into a circulation of astounding proportions. All this time I was blithely going from undertaker to feed store to interurban station in pursuit of little news items, oblivious of the terrible storm soon to break.

“It was said that every teacher in high school had her personal copy of’ ‘Stranded on a Davenport’ before two weeks had gone by, but the explosion came when the principal – a male creature – got his hands on it.” The principal was Charles Emory Byers (below, 1882-1930). 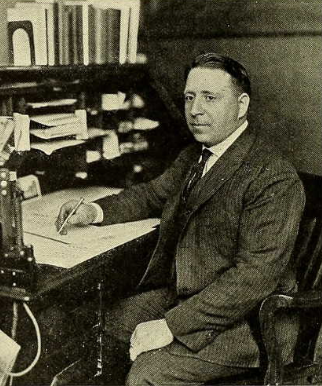 Allen Smith and Brading were tried separately, 13 days apart. O’Malley advised Brading to plead not guilty to “giving away obscene literature” and on April 15, 1924, a jury acquitted him (see newspaper report below; this was written by Allen Smith himself, at his editor’s insistence). Allen Smith wrote in Low Man on a Totem Pole, “Several high-school girls squirmed and blushed their way through admissions that they had received copies of the contaminating document. Each admitted that she had read it, volunteering the information that she had no idea of what it meant.” Allen Smith added that assistant prosecutor Cato Burdge Hurd (1894-1987) called Brading and Allen Smith “corrupters of maidenhood, sin-sodden wolves bent on sullying the fair name of Huntington before the world. (I have no hesitancy in saying that at this time I was a virgin. I think the fact stands as a tribute to my literary skill.)” 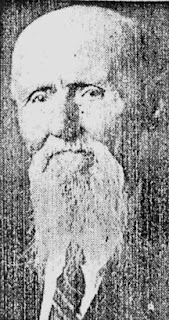 To his surprise, Allen Smith was told by O’Malley to plead guilty when he appeared on April 28 before Justice of the Peace Squire George Washington Stults (right, 1843-1941), to answer a charge of “authorship and circulation of lewd, licentious, obscene and lascivious literature.” The trial was over very quickly, and Allen Smith was fined $10, with $12.50 costs, and given 90 days to pay the $22.50. As well, city attorney Wilbur Emmett Branyan (1879-1941), described by Allen Smith as “a pious gentleman who took an interest in the morals of his neighbors”, told Allen Smith he was “going to spend two hours with him each week studying the Scriptures”. Allen Smith added that he “had discovered that I could no longer get a date with a decent girl in town (no indecent ones were to be had).” The $22.50 was paid by July 27 and Allen Smith left Huntington on September 9 for Jeffersonville. But he was back for a visit to his family in Huntington for Christmas 1924.

Allen Smith claimed in Low Man on a Totem Pole in 1941 that in Huntington “The great ‘Stranded on a Davenport’ case has been forgotten. And so, I found, have I.” Neither claim was, of course, true. In my case I know the Anthony Marks novellas have not been entirely forgotten either. But, like Allen Smith, I have learned to “never trust a cop” and, as far as I’m concerned, that applies to high school teachers, too.

Footnote: Allen Smith described Squire Stults (above right) as "a little old man straight out of a Keystone comedy. He was skinny, bald, and wore white chin whiskers which fanned the air when he talked in precisely the manner of a rube comic.  He had a habit of spitting tobacco juice over his right shoulder just before speaking."

Posted by Robert Messenger at 18:08