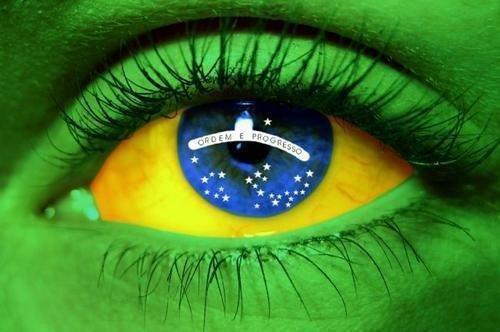 In a post last May on the Top 10 Olivetti portable designs from Ettore Sottsass and Mario Bellini, up to the Lettera 52, I made a half-hearted promise to look at the Brazilian Olivettis. Then someone complained I hadn't covered the whole Olivetti portable range.
Well here, at long last, they are, just three of them: the Roma, the Tropical and the simply awful Lettera 82 (also, shamefully, marketed as a Hermes Baby; Giuseppe Prezioso would be rolling in his grave, poor man).

Plastic DOES matter. These three typewriters are, as one can clearly see, essentially the same machines, mechanically - except two come in metal and one in plastic. The one in plastic is a woeful typer, the other two type very well.
The interesting thing about the Roma and the Tropical is that the mask design, by Alfons Boothby and Georges Joseph, was assigned to Olympia in 1969 and used by Olympia on the Traveller Deluxe and Japanese-made Olympiette series. There is a touch of Japanese about these Brazilian Olivettis, too, with the margin setters clearly from Silver-Seiko. Yet the Chevron, also with the same mask design, was made by Nakajima. Go work that one out. 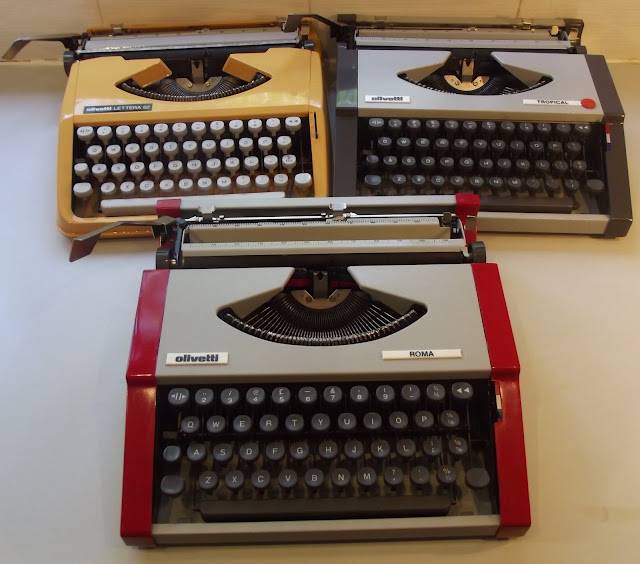 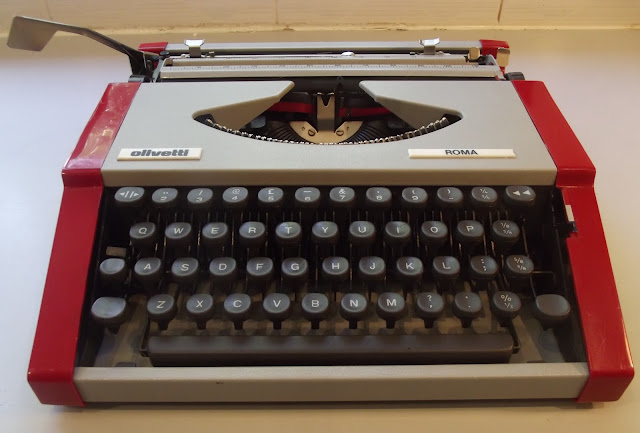 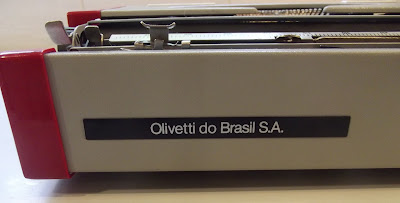 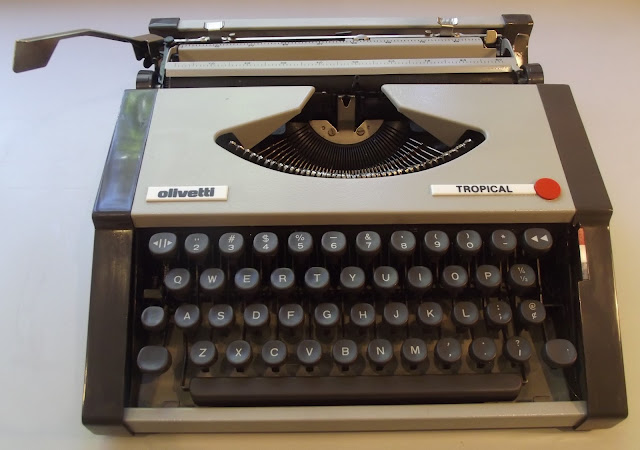 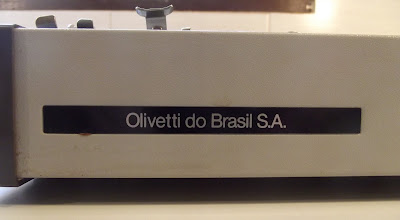 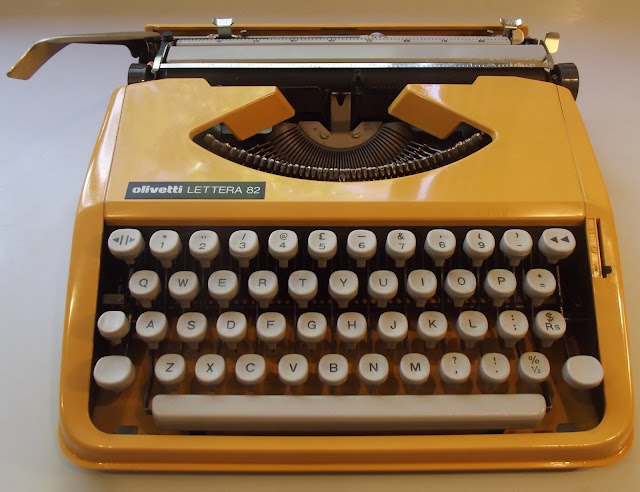 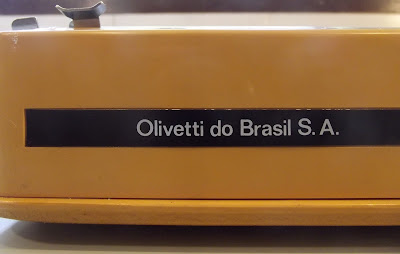 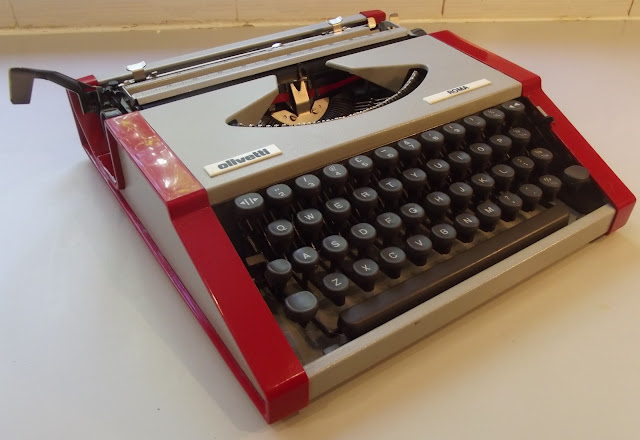 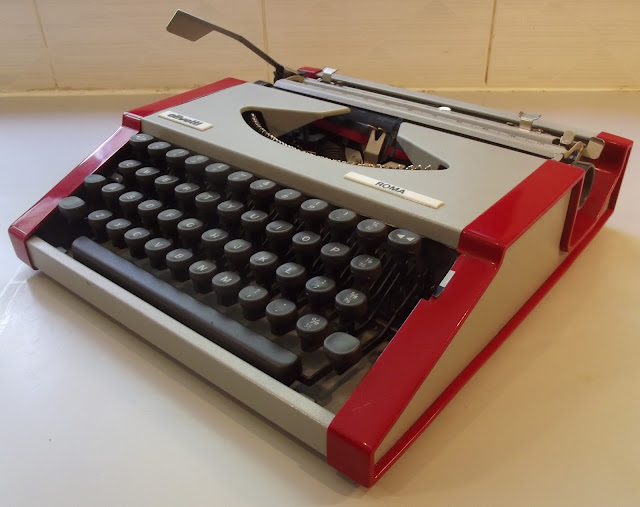 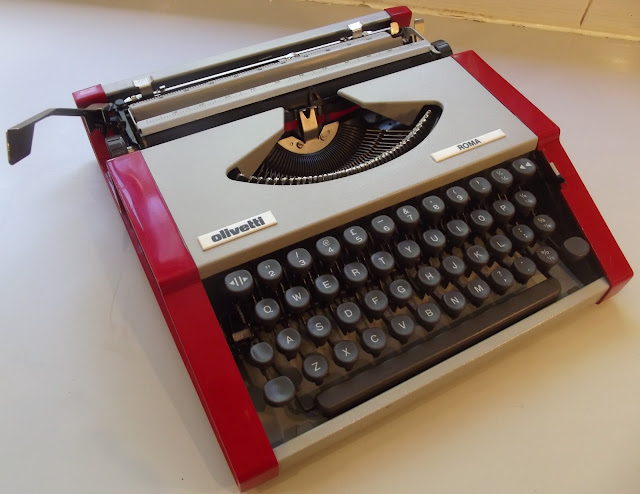 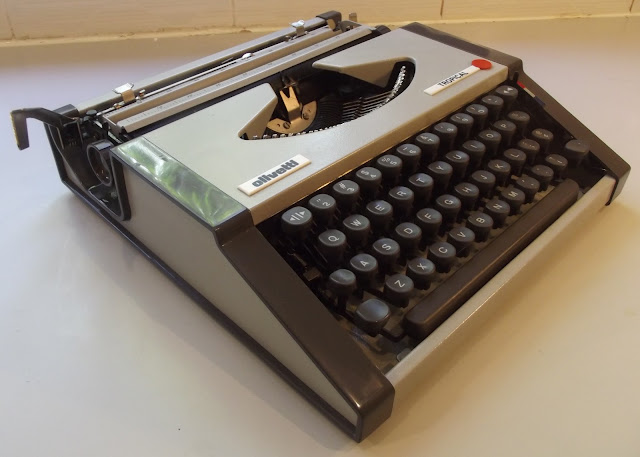 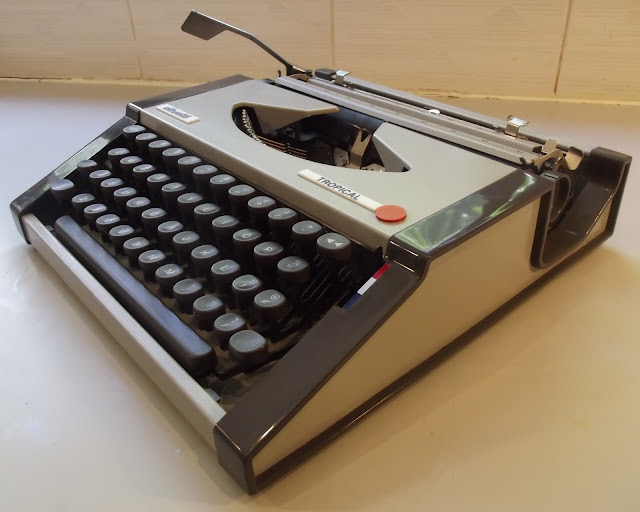 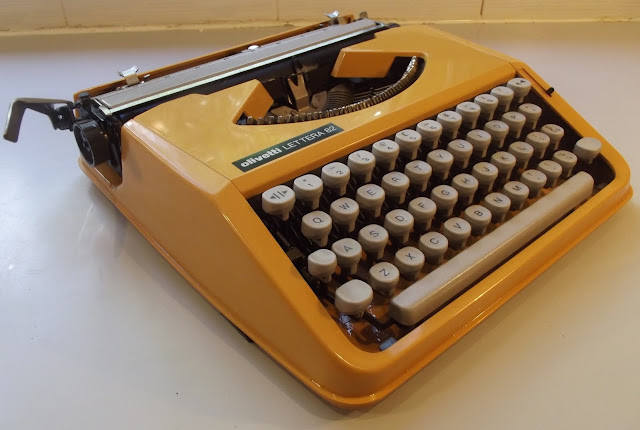 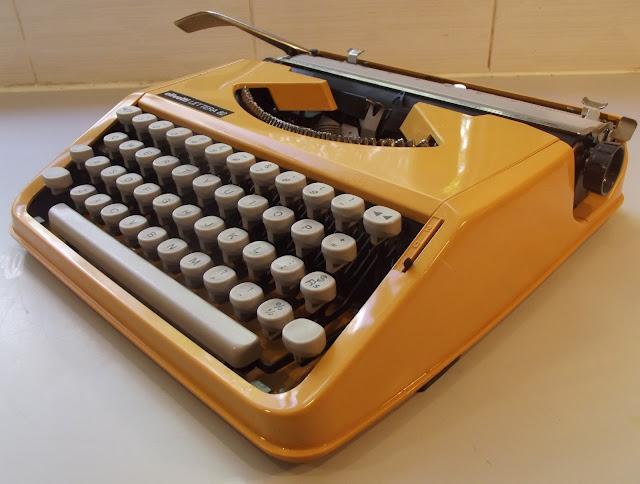 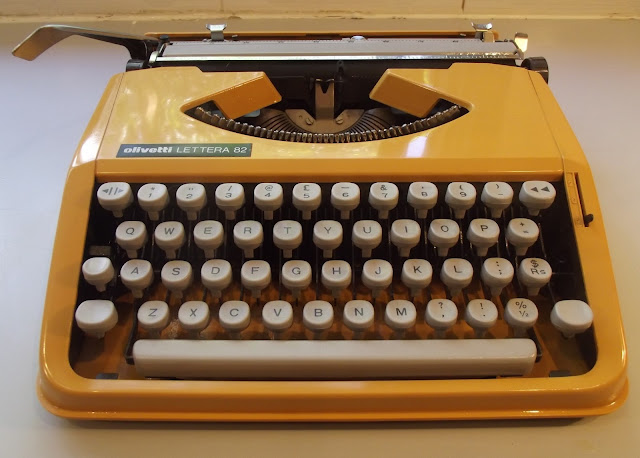 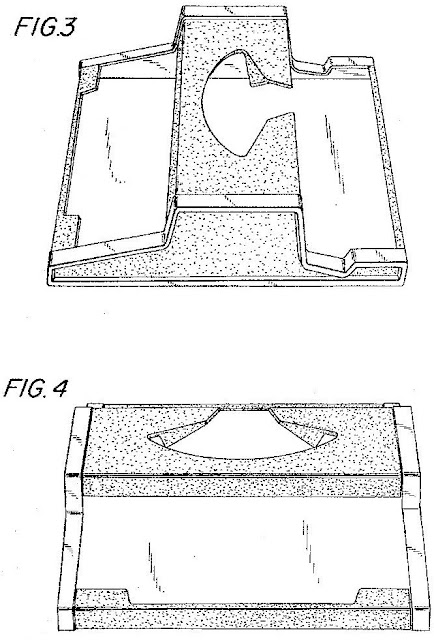 The 1969 Boothby-Joseph design for Olympia 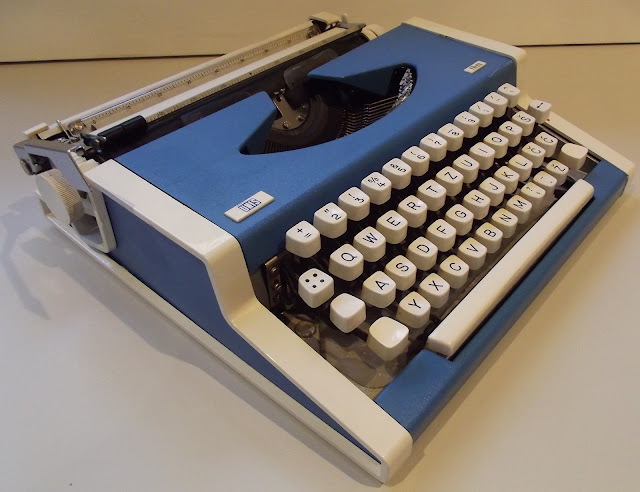 The Yugoslavian version of the Olympia Traveller Deluxe 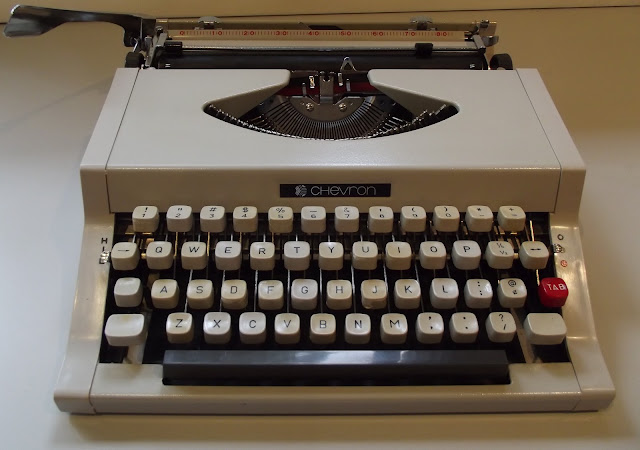 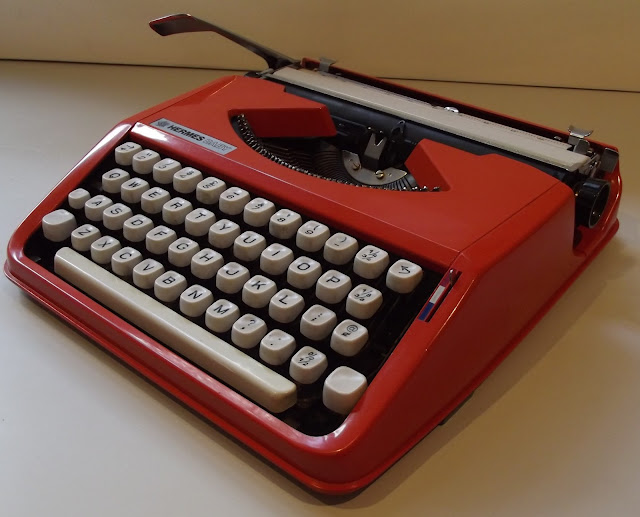 Posted by Robert Messenger at 16:35

My Olivetti lettera 82 (in turquois) is not so bad - not worse than the last charge of Hermes Baby made by Hermes Precisa International, at least.
Here is my question: what are the serial numbers of all these nice Brazil machines?
PS: good morning

What a coincidence; I just used a Brazilian Remington 25 to type an entry for my blog...

plastic matters, indeed. It types considerably well, but you have to go a tad slower than in the metal-cased machines.

Robert, May I suggest a fix for the bouncing segment of the "plastic" typewriter. Try making the segment return springs stronger. This assuming that the up and down segment stops are correctly adjusted for correct motion.
cheers,
John L

Robert,
May I suggest a remedy for the bouncing segment of the "plastic" Olivetti. Try to make the typebar segment return springs stronger. Making sure that the up and down motion stops are correctly adjusted.
Cheers,
John

Ah, I see that I sent yoy this advice twice, so it must be GOOD!

I had no idea that my Brazilian Rocket was related to the Olivetti line. I like learning these things, thanks for all your research!

I must have missed your previous statement on Brazilian Olivetti typewriters. I never knew they were made in Brazil.

Not sure if this is the best place to post this but I've just picked up an Lettera 82 - need it for the most basic of tasks so it will do the job nicely enough for me. Well, nicely enough if I can find the numbers 1 and 0! There is no key for them it seems? Have I bought a lemon or is it hiding somewhere. Obviously I don't have a manual (god help me when I try to attempt to change the ribbon in the future). And what does that lever on the right do with the numbers 2-0-1? Appreciate your help! Carolina

Hi Carolina. The lower-case l acts as the figure one (1) and the upper-case O acts for the zero (0). The lever on the right is for touch control.

Thank you for such a quick reply Robert. I'm laughing at myself because clearly I am a typewriter newbie! My husband also just told me where they were - even more embarrassing that he knows and I don't! Thanks again!

I'm brazilian and I have an Olivetti Lettera 82 and I love it! Here is a little hard to find typewriter machines... Most of them are big, heavy, hard or doesn't work, and the Lettera 82 are very popular and easy to find working! Brazilian people unfortunately don't preserve their old things... But I do!

I'm brazilian and I have an Olivetti Lettera 82 and I love it! Here is a little hard to find typewriter machines... Most of them are big, heavy, hard or doesn't work, and the Lettera 82 are very popular and easy to find working! Brazilian people unfortunately don't preserve their old things... But I do!

I just bought an Olivetti Tropical at our local rubbish tip shop yesterday (yes, they have a shop selling salvaged items though not electrical items).
I have just been cleaning it - my way of becoming familiar with an item.
It is in excellent condition, clean and smooth working. The ribbon even had ink!

One thing, though, it has no label on the back to indicate where it was made. Were they all made in Brazil?

I don't collect typewriters per se but vintage domestic objects in general and this was just another addition!
I have had several Valentines and also some Mario Bellini Olivetti Personal ET 55s and 56s electronic typewriters.
General collection - https://www.flickr.com/photos/36040317@N02/
Typewriters - https://www.flickr.com/photos/36040317@N02/albums/72157615046721271
Michael

Do you know if there's a quality difference between of Olivetti models that were fabricated both on Europe and on Brazil? I mean the Studio 44, the Lettera 22, the Lexikon 80 etc. Because, here in Brazil, we can find cheap Olivetti typewriters all around. But if they are "made in Italy", the prices duplicate or even triplicate. I never known if there's a quality issue or if it's just a label fetisch. What do you think?