And Provided Athletics Worth While!
“Writing good editorials is chiefly telling people
what they think, not what you think.”
- Arthur Brisbane 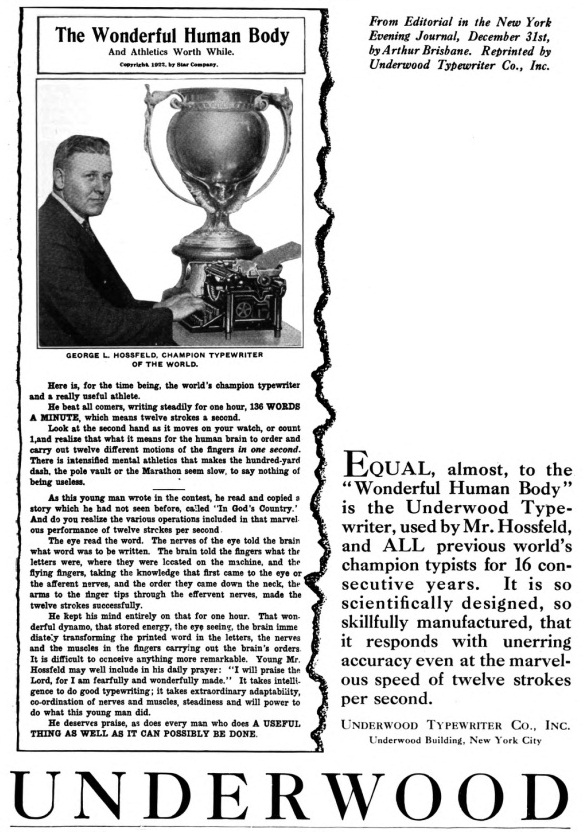 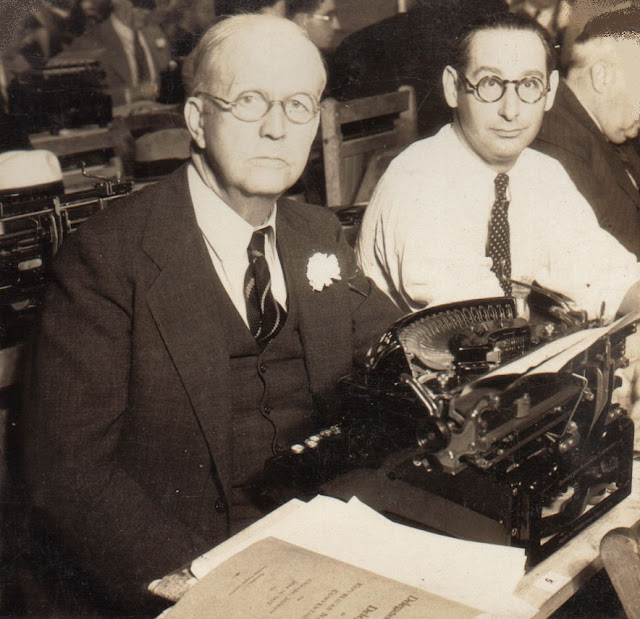 Arthur Brisbane (December 12, 1864 – December 25, 1936) was one of the best- known American newspaper editors of the 20th century. Born in Buffalo, New York, he began work as a newspaper reporter and editor in New York City in 1882, first at the Sun and later Joseph Pulitzer's New York World. Hired away from Pulitzer by William Randolph Hearst, in 1897 Brisbane became editor of the New York Journal and Hearst's close friend. His syndicated editorial column had an estimated daily readership of more than 20 million. He remained occupied in journalism and the newspaper field until his death in 1936. Hearst said " ... Arthur Brisbane was the greatest journalist of his day," and Damon Runyon wrote, "Journalism has lost its all-time No 1 genius."
In 1897, he accepted the editorship of the Evening Journal, flagship of the Hearst chain, and through it gained influence unmatched by any editor in the United States. His direct and forceful style influenced the form of American editorial and news writing. The saying, "If you don't hit the reader between the eyes in your first sentence of your news column, there's no need to write any more," is attributed to him. In 1918, he became editor of the Chicago Herald and Examiner, and in the 1920s became editor of Hearst's first tabloid, the New York Mirror. A Time magazine  cover story on August 16, 1926, described his influence: "The New York American, the Chicago Herald-Examiner, the San Francisco Examiner and many another newspaper owned by publisher Hearst, to say nothing of some 200 non-Hearst dailies and 800 country weeklies which buy syndicated Brisbane, all publish what Mr Brisbane has said. His column is headed, with simple finality, 'Today', a column that vies with the weather and market reports for the size of its audience, probably beating both. It is said to be read by a third of the total US population. Obviously this is an exaggeration, but half that many would be some 20 million readers, 'Today' and every day."

Above, George Hossfeld as he looked in 1918, and below, in 1922.
For a 'fine athlete', he has packed on some weight in those four years.
Hossfeld went on to win 10 world championships. 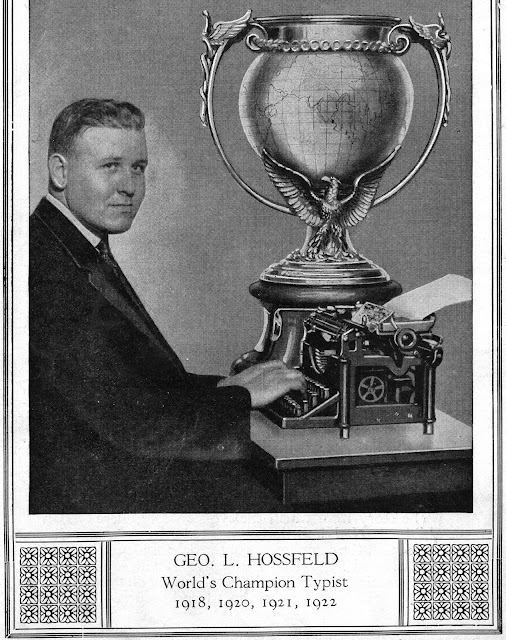 George Leonard Hossfeld was born in Paterson, New Jersey, on December 5, 1898, the son of Johann Caspar Hossfeld (born June 22, 1863, Meiningen, Leipzig, Germany) and his wife Anna Hoerber Hossfeld (born of German parents in Paterson, August 7, 1860). But for one of those simple twists of fate, George Hossfeld might never have been among us to win world typewriting titles. His mother lost her first-born child and was told she would not be able to have more children. Shortly afterwards, the Hossfelds’ neighbour died when her seventh son, William, was nine-days-old. Because the families were close friends, Caspar and Anna offered to care for Willie in place of the child they had lost. On June 6, 1891, the Hossfelds adopted the baby, giving him the name William Carl Hossfeld. On October 26 the following year, the Hossfelds welcomed son Elmer into the world. And more than six years later, George was born. George Hossfeld died on January 10, 1972. 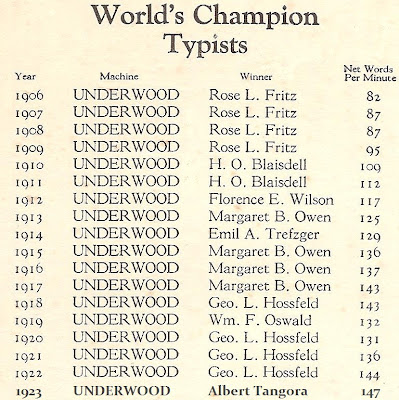 Meanwhile, across town, another typewriter company, another world typing champion ... 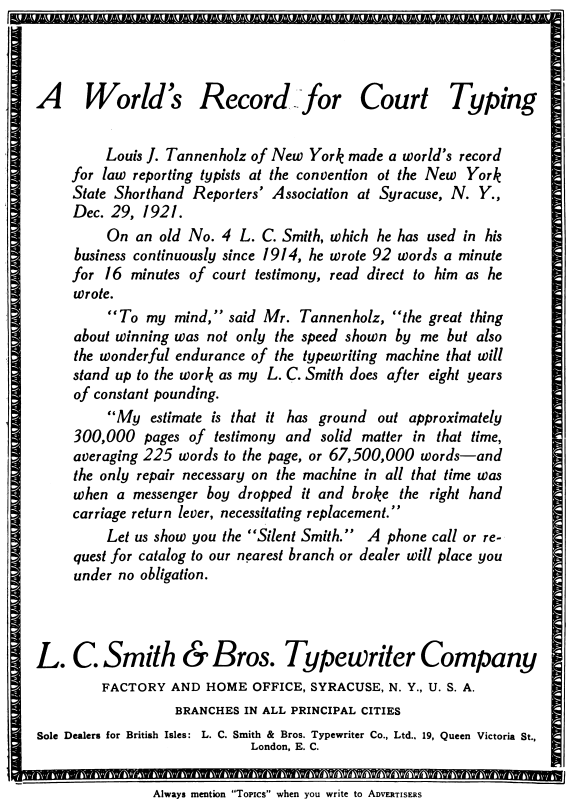 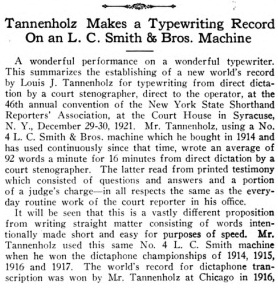 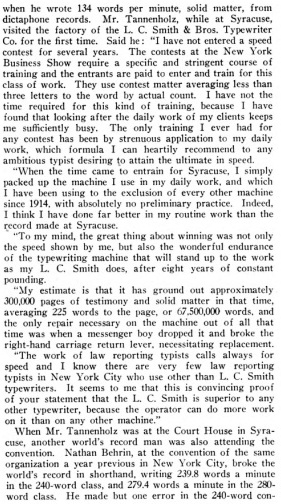 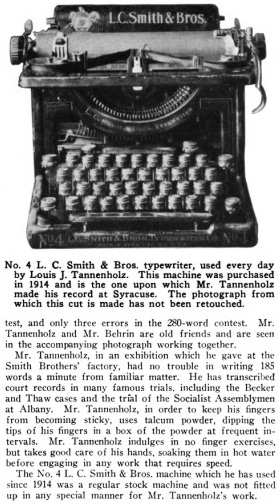 From Typewriter Topics, February 1922
Posted by Robert Messenger at 17:01

When I worked at MacDougalls I was told that these typewriters carefully "tuned". The main spring tension was increased and the escapement dog was carefully filed down. The return spring on the dog rocker was stronger than a stock machine. How much of this is true I am not sure but I had it on good authority from an old mechanic that this was standard practise when you wanted to increase the speed of the typewriter.