HAVE TYPEWRITER, WILL TRAVEL (Even if it's in a sinking car!) 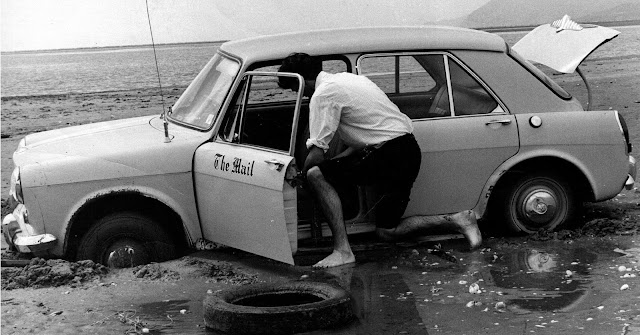 The story must get through: A dedicated, then 20-year-old sports editor of The Nelson Evening Mail takes off his shoes and socks, rolls up his shirt sleeves and trouser legs, gets down on his knees in the wet sand and types out his copy on an Olivetti Lettera 32 portable on the front seat of a rapidly sinking staff car at a beach on Tasman Bay in New Zealand in February 1969. The car did sink, but was later rescued. The story did get through, and was later praised. The journalist didn't drown, but survived to write this post exactly 44 years later. 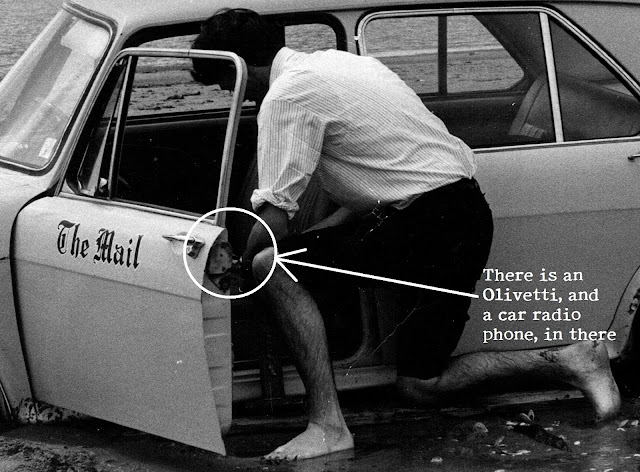 Photos by Colin Warren, of Westport, Buller.
William Boot has nothing of this, Jasper!

Forget the rising tide, save the Olivetti - it's in the boot of the car.
I'll need it for International Typewriter Appreciation Month in 2013. 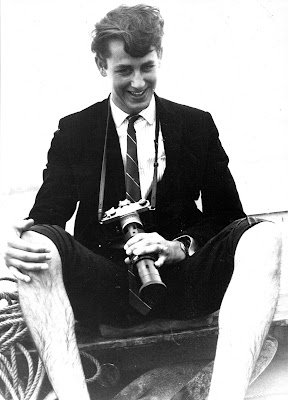 Last time I cover a regatta on Tasman Bay
Posted by Robert Messenger at 16:23

Robert, this is the real deal. No W. Boot fantasy going on, here. Even if typing copy from a sinking car is pretty ludicrous.
And the stories are only getting better, too.

Our first family car was a Morris 1100! And our second, for that matter.

As much as I love typewriters and I'm glad you managed to finish the note and save the faithful Lettera 32, I can't help but wonder: what kind of car was that? And what became of it? Could it be saved before it was engulfed by salt, sand and waves? Or it's now one of those hidden metallic treasures (or wrecks) that make beachcombers' metal detectors go wild?

Nice to see the Morris 1100 mk1 in the picture, I have one in Trafalgar Blue at home. As an unplanned collector of typewriters ( I bought an Empire DeLuxe portable in brilliant condition for £1.50 in a bootsale), I have to say how much I enjoy reading your blog. Thank you.

That's fantastic, Robert! Thanks for sharing that.