'The Evening Press' Case Room - RTÉ Archives
I am a "member" of a Facebook group through which former editorial staff members of Dublin's The Irish Press stay in contact. Yesterday the moderator of this group, Ronan Quinlan, posted a most fascinating little video, passed on to him by Louise Ní Chríodáin, about the way in which the newspaper's pages were put together in what I remember as the "stoneroom" or simply "stone", in this instance called the "caseroom". Of course, this process did not involve typewriters, but the copy being typeset on Linotype machines was all typewritten.
I am aware that some Typospherians are quite interested in this long-gone newspaper production method, even though it had little to do with typewriters. Watching the five-minute video, made by Raidió Teilifís Éireann in November 1964 (10 years before I joined The Irish Press) and now available through RTE's archives, brought back many happy memories of working in stonerooms in various parts of the world. It reminded me that the set-up and layout of these sacred areas of a newspaper building, the procedure and the language (the words used in the process) were common to stonerooms wherever I worked – New Zealand, Australia, Ireland and England.
This is definitely a lost art. Some years ago I wrote a column about working on the stone, and searched the Internet in vain for something like this video, or at least a written description of the process, to confirm my recollections. Is it a "forme" or a "form"?
To this day I find people are still interested by the way it was done. For example, as old-timers such as myself recoil at the mistakes which now appear so regularly in print, we recall the way in which newspaper moguls like Rupert Murdoch, so eagerly embracing new technology in the mistaken belief it would save money, mercilessly ripped the guts out of so many tiers of the story checking process. The compositors themselves read the type, upside down and back to front as it was, checking for errors. In the video, one sees the proofing process, with galley proofs being run off from long, thin galleys of Linotype set copy, to go to the proofreaders' room (always adjacent to the stoneroom). Good copytakers often corrected grammar as they typed, even before the copy reached sub-editors. Then there were check sub-editors. And the linotypists were never afraid to draw attention to mistakes. All of these tiers of checking copy have now gone.
All this was brought back to mind, coincidentally, as I was preparing to make a presentation to book editors titled "A Curiosity-Breeding Little Joker: Mark Twain and the Early Typewriter". One thing one will always be asked at a typewriter presentation is to do the impossible and explain the mystery of QWERTY. I find Twain's reference in his first typewritten letter (to his brother Orion Clemens, on December 9, 1874) to being reminded by the typewriter of "old Robert Buchanan", quite intriguing. Twain says he was "lost in admiration" for Buchanan's "marvelous intellectual capacity" in setting up articles "at the case" (by hand) "without previously putting them in the form of manuscript".

I'd say Twain knew nothing about the development of the typewriter, or about the man behind it (Christopher Latham Sholes) - which means Twain wouldn't have known Sholes had a similar background to his own in typesetting newspapers. Therefore, the reference to Buchanan was just one of those spooky, spine-tingling yet tantalising chance asides. In his Antique Typewriters: From Creed to QWERTY (1997), Michael Adler quotes an alleged Sholes explanation for QWERTY from Milo Milton Quaife's 1925 Henry Roby's Story of the Invention of the Typewriter. 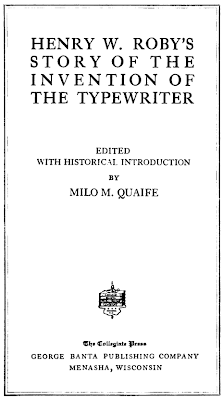 We do tend to grasp at these, since Sholes himself left nothing to help unravel the enigma: 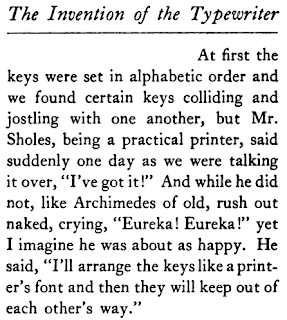 P44
Adler says "This is not a bad theory", but then goes on to dismiss it along with all the other theories.
A much less happy coincidence was that this morning I got the expected word of the death of a dear old friend, John Joseph Carter, aged 86. Jack Carter was a compositor who made the transition to journalism long before I first met him, in 1979. Throughout the second part of his career, Jack made excellent use of the knowledge he had acquired in typesetting and page assembly. He taught me more about typography that anyone else I ever met in newspapers, and I am forever thankful for it. Once new technology was entrenched, this knowledge was never made available to young journalists, which is a great pity. They have no idea about correct leading, about why Helvetica was designed and how it should be used (single column, caps only), about the awful eyesore created by mixing serif with sans serif, about never using serif on coloured backgrounds. The local rag has had to apologise on at least three occasions that I know of, because whatever the type said, the reader simply couldn't read it! How stupid is that?
Jack's greatest claim to fame came one Saturday evening as he was turning off the lights and locking the doors after a long shift. Word came through of a major earthquake. Jack not only wrote the story, but typeset it and placed in a remade page - then, in crowning glory, he turned the presses back on to roll with this up-to-date news.
After watching the Irish Press video, I went looking for similar films which showed the writing and sub-editing processes in newspaper newsrooms. If you watch the Irish Press "caseroom" film, you will see that RTE's archives also have a long news item about the newspaper business in Dublin in 1971 - but there's not a typewriter in sight.
What came up at the top of a YouTube search was a series of clips from the British TV drama series The Hour, set in a London TV network's newsroom. I have watched a couple of episodes of this show, having noted comments from Mike Clemens (no relation to Orion or Samuel, I believe)  on typewriters appearing in another British TV show, one starring Stephen Fry. I was confused by the range of typewriters used in The Hour, as the episodes I saw seemed to be set around the height of the Cold War and the Cuban Missile Crisis. My eagle-eyed friend Jasper Lindell also spotted this inconsistency, and emailed me with images of typewriters such as an Olivetti Lettera 25 beside a Remington International (which I used at The Australian in 1969) and a much older Remington. It seems little care is taken these days to get the right machines for the right era. 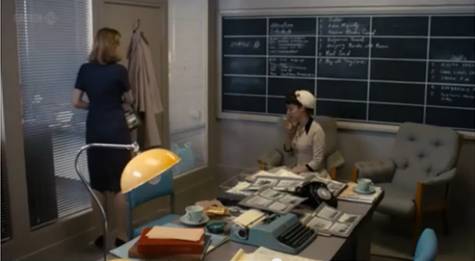 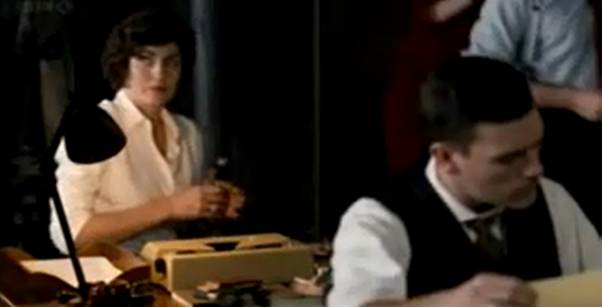 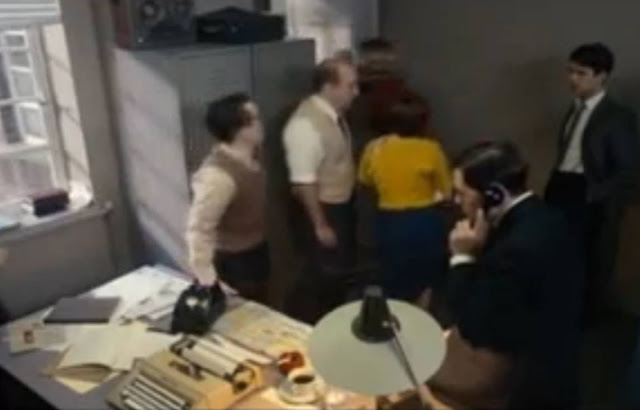 But as for real newspaper newsroom footage, this short New York clip was further down the list:

Posted by Robert Messenger at 15:39

I find, too, that good information on typography - information that isn't from supposed "experts", who gave the name to themselves - is very hard to come by.
Surely we don't need another dead art, when we're reading so much - albeit in on a screen.
And my new favourite game is spot the mistakes in every newspaper or magazine I read...

I too would like to be able to find more on typography. I had 3 favorite places when I was growing up in a small town. The local TV repair shop, one of the garages and the local small town newspaper. It was fascinating to watch the print being set by the Linotype operator and the presses and all the other things in a print shop.

One of my favorite shop classes was our print shop where we had 2 job presses and had to set our own type.

I do not know what modern publishers do but rely on spell checkers and character recognition software because I see a tremendous amount of the incorrectly used word properly spelled in newspapers and magazines. I wish I would have kept one from one of the area papers. Not too long ago they even published the incorrect, but correctly spelled. word in the headline!
I see it often in magazines.

I have a olivetti lexicon 80