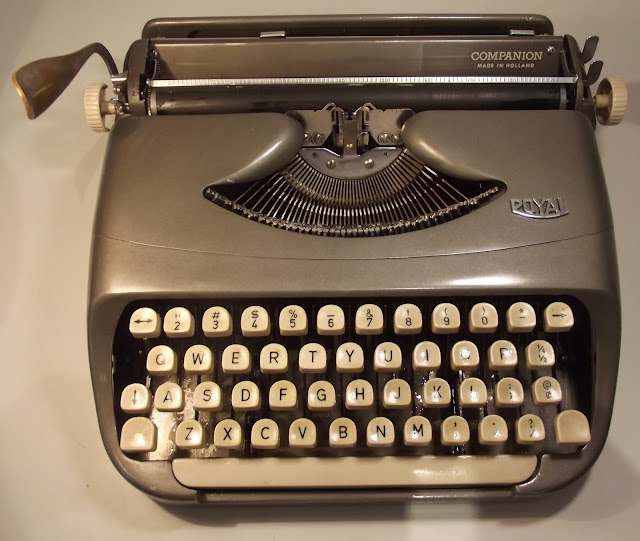 I mentioned this Dutch-made Royal Companion portable typewriter in an earlier post, promising to return to it with a look at the steps taken to get it back into good working order. It was a long and not inexpensive process, but worth it in the end. The Royal Companion was listed as being sold in "good working condition", but was far from that. When it arrived:
1. It couldn't type. The typebars on each end of the typebasket were jammed in under the ribbon spool cover and, when the keys were struck, the bars simply couldn't move or, in some cases, just clanked up against the under side of the cover.
2. The ribbon spool cover was jammed on so tightly it couldn't be lifted off.
3. The grips under the spacebar, which should have been held in under the front lip of the mask, had come adrift of the mask and the spacebar was floating up with the bottom bank of keys.
4. The inner workings were absolutely filthy.
I had, of course, previously encountered the problem of typebars failing to clear the opening in the ribbon spool cover. This was with the Rexina (aka Baby Alpina, Condor) which arrived from England last year. At that time, both Richard Polt and I thought the problem might have something to do with worn grommets. I think we were right, but partly because the bottom section of the Rexina is plastic, I was unable to fix it properly.
Given that experience, my first thought with the Royal Companion was grommets. All the signs were there: the ribbon cover sitting too low and being jammed on so tightly, and the floating spacebar. A quick inspection under the typewriter showed that, yes, all the grommets had perished, to varying degrees. They would need to be replaced. But grommets are hard to come by - at least I find they are. So some improvisation was called for.
On the Royal portable, the grommets provided both a little elevation off the writing surface (on the bottom side of the base plate) and some shock absorbing between the machine and the base plate (on the upper side). There were also a number of smaller rubber rings around the upper side to help absorb shock. The improvised grommets required two parts: one on the bottom side of the base plate which would stop the screws simply going straight through the opening (this meant using what survived on the original grommets - when they perish with age, they shrink and harden), and one on the upper side.
So here is the work step by step:

One of the better grommets, but still too brittle, hardened and flattened to do its job 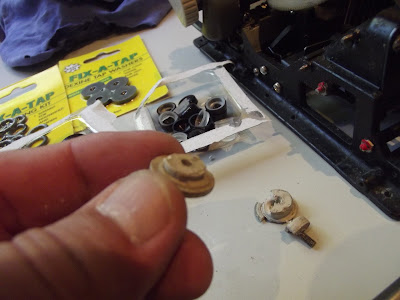 A broken grommet, one which could be trimmed and recycled 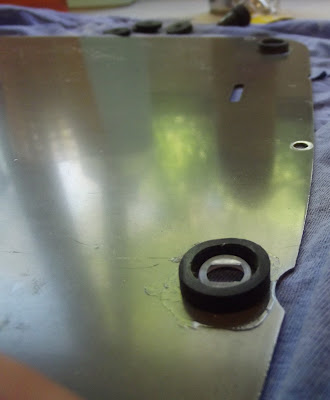 Bottom half of an improvised grommet, with an improvised centre section to stop the screw going straight through the large opening. The recycled, trimmed part of a hardened old grommet proved useful here. 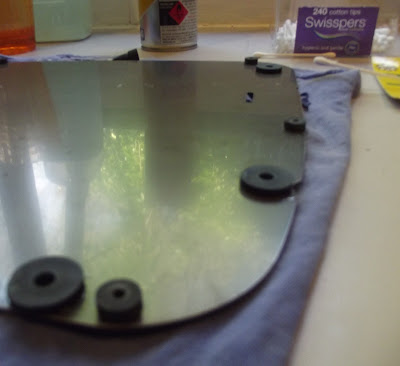 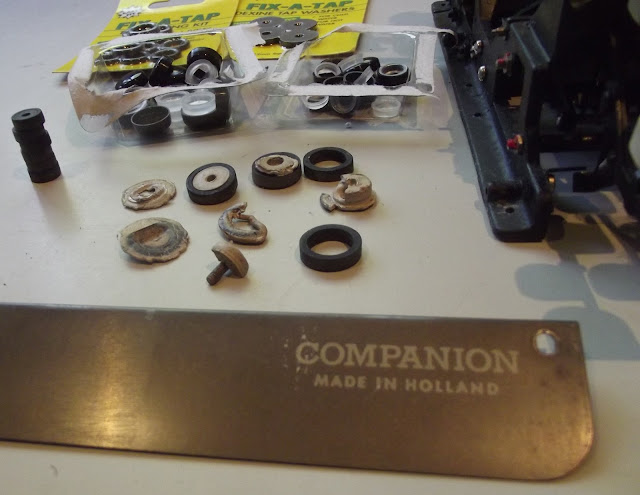 One small point: Parts of a typewriter might sometimes appear to have scratched or chipped paintwork. It's worthwhile trying a mild cleaning agent first, as in this case it proved to be simply smeared liquid paper. Behind the paper plate here can clearly be seen the state of the original grommets. 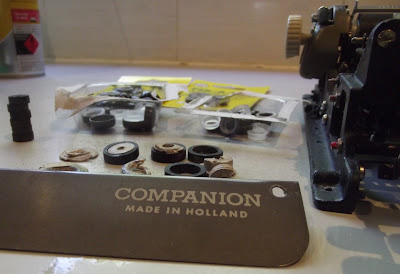 Regardless of whether the machine needs repairing, I have always advocated taking the base plate off a portable, anyway, to clean out under the workings. The first example here is a Chevron, the later examples this Royal Companion: 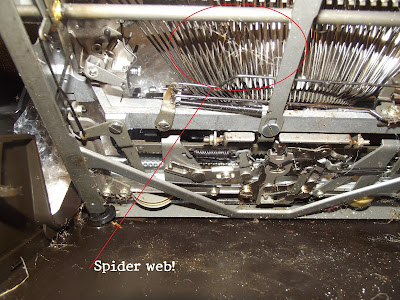 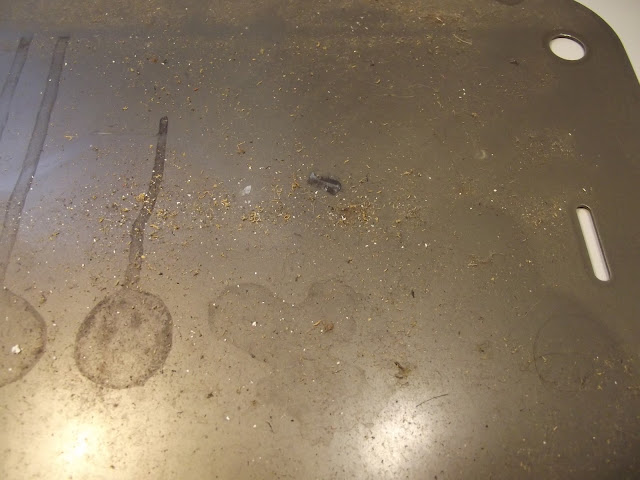 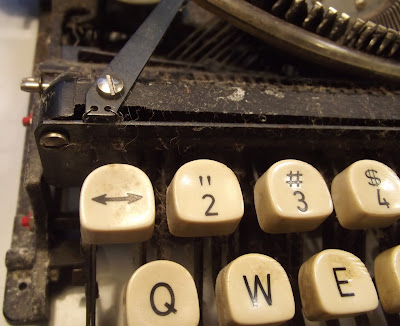 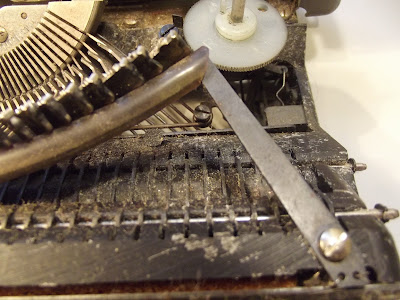 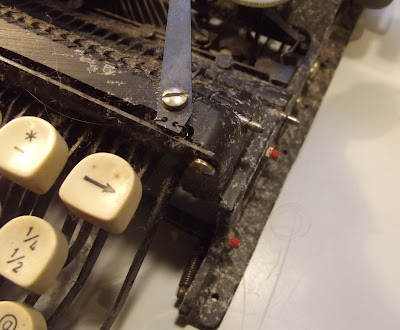 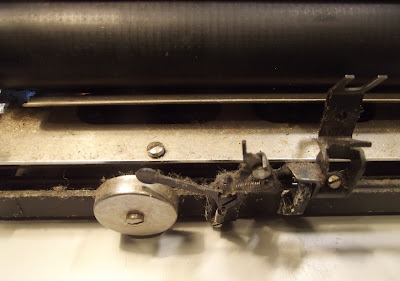 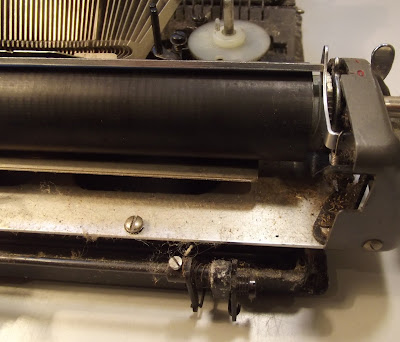 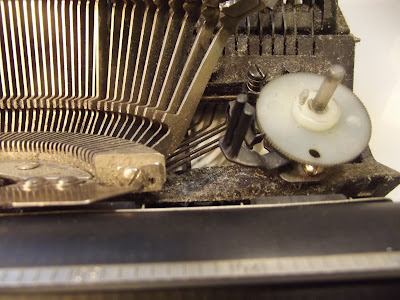 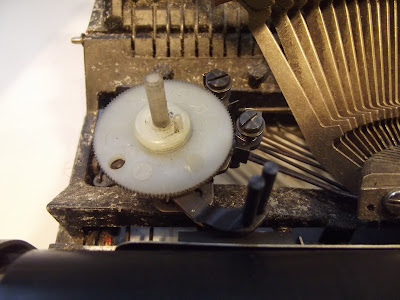 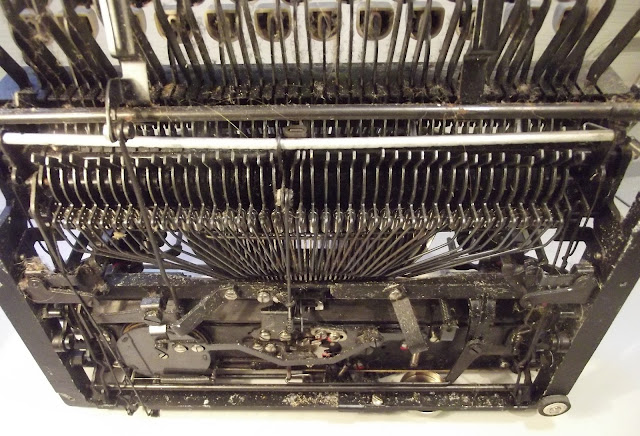 A liberal spraying with a light cleaner-lubricant and a good blow-through with an air-compressor will soon rid the typewriter of  all this disgusting gunk: 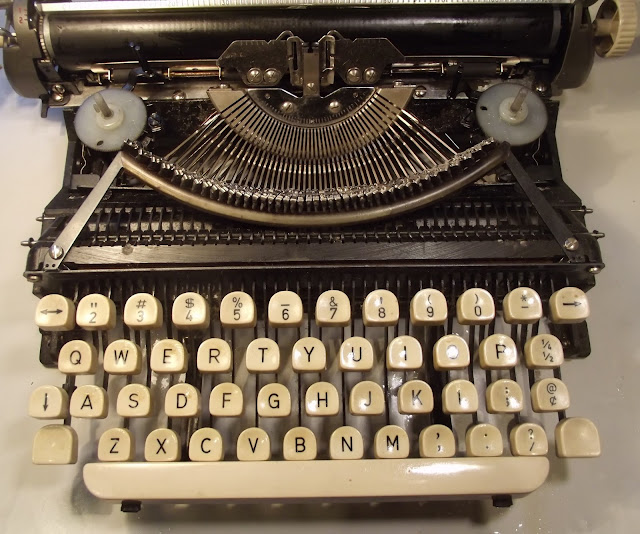 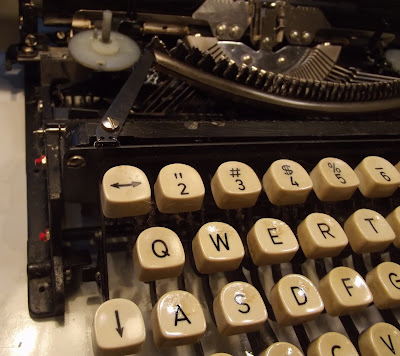 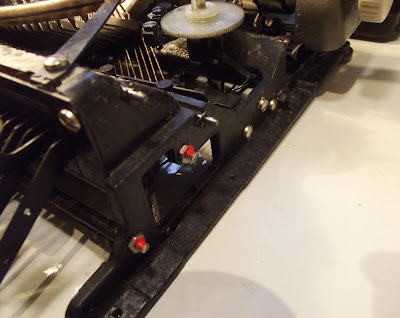 One can see from the finished product, below, that all the typebars are now clear to move out through the ribbon spool cover opening, the cover comes off easily, as it should do, and the spacebar sits down in its proper position. The typewriter is back working as it is supposed to do: 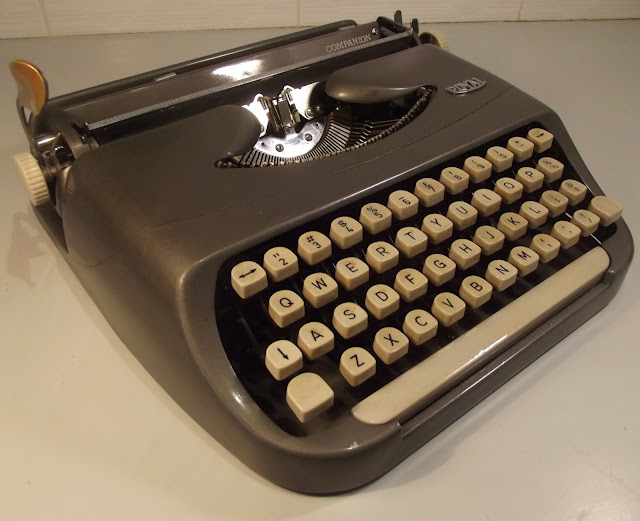 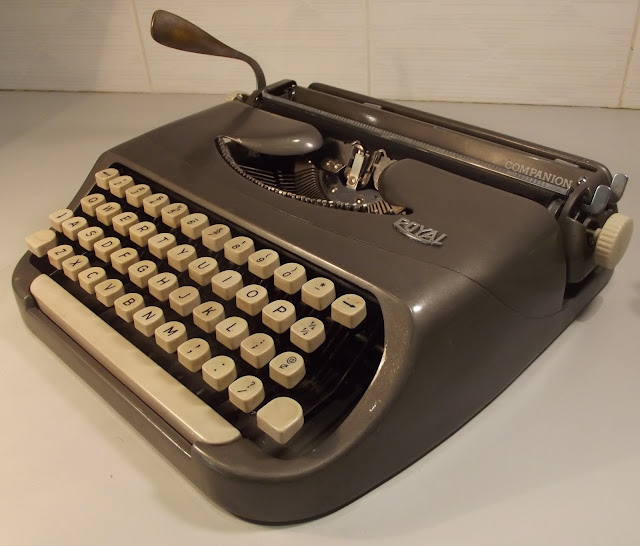 This typewriter was originally sold in Palo Alto, California, but somehow found its way to Australia, before being sold to me. Its serial number is 5358098

Posted by Robert Messenger at 09:04

Congratulations on the great restoration Robert. It is amazing how dirty some machines get too. Looks like a new one.

Very nice work. It's now a handsome and inviting machine!

My local hardware store fortunately includes some assorted grommets among the many drawers of screws, washers, etc.

This is unrelated, but thought you and your readers might enjoy it: in a recent NPR interview, writer Charlie LeDuff said that he's not a journalist, he's a reporter; the difference is that journalists can type without looking at the keyboard.

Fantastic looking machine! And it's a typeface worth the effort, too!

Oddly, I did the exact same thing to a Royalite just recently!

Thank you Bill, Richard, Vikram and Scott for your comments. I agree about the font.
I was told the only place to get grommets these days was in a shop specialising in modern technology electricals/wiring, but wasn't able to check that out. Without proper grommets, of course, I had to glue the two halves of the improvised grommets to the base surface. Scott, have you posted on your Royalite work?
As for Mr LeDuff, I can only concur. Thank you for that link.

Wow, that was impressively filthy! Good work cleaning it up. I'm surprised, but shouldn't be, that those grommets could make such a difference.

No, not as yet. I haven't even posted about the trauma of actually getting it from the seller yet.