HAVE TYPEWRITER, WILL TRAVEL (II)

As part of International Typewriter Appreciation Month, I’m telling a few tales about the way in which sports writers greatly appreciated their portable typewriters on their international travels in the 60s and 70s.
HAVE TYPEWRITER, WILL TRAVEL
Part Two
The Olivetti on the Nile 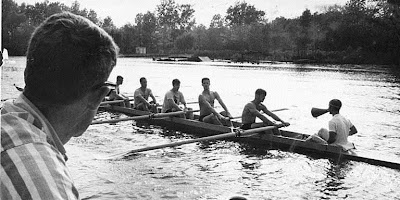 Richard D. Erickson only ever used a typewriter to type his rowing schedules. There was never room nor need for one on his coach’s launch. As a sideline to coaching the oarsmen and women of the University of Washington, Dick Erickson sometimes filed rowing reports to a Seattle radio station. But these were mere sound bites, if very loud ones. They were off-the-cuff comments, never written. The same applied when, later in life, Erickson took up cable TV commentating for the spring Windermere Cup opening day races on the Montlake Cut on the Lake Washington Ship Canal. Erickson, never known to restrain his enthusiasm, didn’t feel a need to write down what he was about to say: he was an unabashed rowing fan without a typewriter, and he knew his sport.

Throughout my long career in sports writing, I was unashamedly the proverbial “fan with a typewriter”. Hardly surprising, since whatever skill I had in banging out stories on my Olivetti Lettera 32, it took me across the globe many times and got me ringside seats at the peak events of all the sports I loved most. I covered two Olympic Games, three Commonwealth Games, more than 100 rugby Test matches – from Murrayfield in Edinburgh to Carisbrook in Dunedin – and World Cups in both codes, world track and field, swimming and rowing championships, Royal Henley, Ashes Test cricket, Wimbledon and the Australian Open tennis, British Open golf and Admiral’s Cup yachting. Not bad for a kid from the boondocks of New Zealand. And, in most cases, not bad for the same little Olivetti.
I once even plonked the Lettera 32 beside Maury Wills at Candlestick Park, where Wills boasted to me about being in the Guinness Book of Records for circling the bases in 13.4 seconds in 1953.  He and I exchanged observations about “a pitcher’s game’ and “a bowler’s wicket”.  One offers a great deal more excitement than the other, but I won’t hint at which. 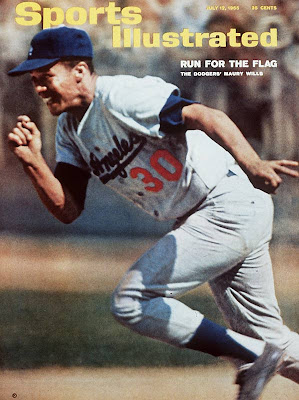 Maury Wills on the cover of SI
Bowler’s wicket or otherwise, I always felt a keen sense of excitement as I sat at my Olivetti in the Press boxes of the sports world. The constant challenges of writing and filing copy were a very large part of that. Facilities afforded the Press at major sporting events from the late 20th century are light years ahead of those journalists in the 1960s and 70s had to endure. More importantly, back then we could not have envisaged the technology, such as mobile phones and laptops with modems, which later became available to transmit copy. But I wouldn’t trade my experiences from the earlier period for one jot of the dream ride that sports writers get today.
Nor would I contemplate swapping my memorable misadventures in Egypt during a steamy Christmas 1978 for the air-conditioned comfort of a modern press room.
In Part One of this series, I mentioned the special difficulties which were presented in covering rowing. I love rowing, but by its very nature, in the days when there were few of the hugely expensive man-made courses around, rowing was not a Press-friendly sport. Rowers headed for the best and longest (standard length, 2000 metres) stretches of relatively still water that they could find, often reservoirs or lakes; rivers with any sort of flow in them were a last resort. Hence, there were usually no built-up areas within sight, so no telephone lines. In such circumstances, being armed with a portable typewriter became all the more critical. 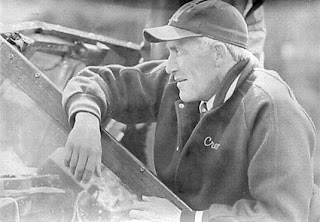 Dick Erickson
A memorable character I often encountered on the international rowing circuit was Erickson, one of those people for whom Alexander Graham Bell’s invention, let alone Christopher Latham Sholes’, had little purpose. Erickson’s booming voice (most necessary for a rowing coach) could cross the Atlantic in a single bound, and I used to imagine the Seattle radio station simply hanging a microphone out of its distant window. Invariably, Erickson’s tone also conveyed a grandiose message.
One balmy Friday evening at Royal Henley, a useful Irish police crew, the Garda Síochána na hÉireann eight, beat Harvard University to advance to a semi-final clash with Erickson’s renowned Huskies in the Grand Challenge Cup, the most prestigious event.  Erickson somehow managed to squeeze his considerable frame into a British Telecom booth outside the Press Room and knocked the jowls of Fleet Street journalists from the nearby bar slide by hollering down the line, “Tomorrow we meet the Irish cops, and man can those guys move? But we’re gunna make ’em look like flatfoots!” Erickson’s eight Big Foots did beat the Garda, but not by much. Under Mike Hess’s captaincy, Washington went on to take the title too.
Yet Erickson was capable of the classic understatement. When he took Washington’s Huskies back for their fourth consecutive visit to Egypt, for the 11th Nile International Rowing festival in 1980, Erickson calmly observed, “This is one of the most unusual athletic contests I’ve ever attended.” 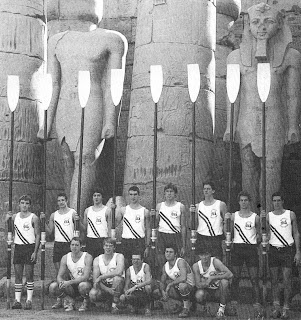 The Huskies at Luxor
I had had the pleasure of the company of Erickson during Washington’s second visit to Egypt, in 1978, and I can only vouch for this assessment. Also invited to the “Festival of Oars” on the Nile was an Irish Universities team, and I quite happily gave up a Christmas at home in snowy Dublin to cover the trip, and spend a largely uncelebrated Yuletide under the clear blue skies of Luxor and the smoggy ones of Cairo. From experience in working in North Africa, I knew my Olivetti would be my most vital piece of luggage.
Washington’s rowing program budget was apparently large enough for the US representatives to ship to Egypt a carbonfibre shell and oars. The Americans, unlike the Irish, were aware of what lay ahead of them. When the bus from Luxor Airport approached the Savoy Hotel, one of the Huskies warned, “What you see if just a façade.” He was dead right. Accommodation was a line of small, basic shacks beyond the almost imposing front. The Americans also knew to take with them massive jars of peanut butter. As for us, it was a case of Irish incompetence meets Egyptian ineptitude. We were simply told to assemble at Orly Airport, by whatever means available – boat, train, plane or hovercraft. Preparation? Zip and zero. Equipment? None, bar just the one portable typewriter.
Instruction from the Egyptian Tourism Ministry was, “Once at Orly, we will look after everything else.” If this had turned out to be even half true, the trip would have held little of the fascination it did.  We were embarking on a 10-day reign of utter confusion. But it was a confusion of fun. 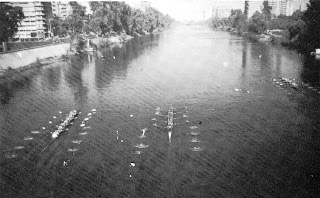 The course in Cairo
The highlight was the opening ceremony at Luxor Temple, followed by a parade through the town’s chanting crowds to the start line. One eights race was held in Luxor, two days before Christmas, and a two-program started in Cairo on Boxing Day. Washington, winning in Luxor, had never rowed so fast. There was a 35-metres a minute flow in the Nile, and it took the Huskies just a tick over six minutes to cover the two miles. The Irish paddled home 22 seconds in arrears. They had excuses. “The boat they lent us came out of the Egyptian Museum of Antiquities,” complained the stroke, Gerry Macken. “It was last used in the year 3002 BC.” Macken decided to fix the well-seized seat slides by stealing into the Washington camp late one night, grabbing a few fistfuls of peanut butter and lubricating the rails.
On the flight back to Cairo, Erickson handed each member of his crew 10 Egypt-Air postcards and instructed the oarsmen to write to sophomores back home, encouraging them to work hard to make the team for Egypt the following year. Such dedication to a fairly pointless cause! 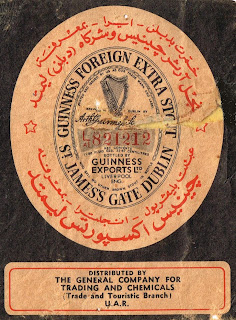 In Cairo we did stay in a grand hotel, Shepheard’s, and on Christmas Day, with nothing else happening, we drank the place dry of Guinness Foreign Extra Stout. On a narrow stretch of the Nile, Domnhall McAuley, a sculler from Queen’s University, Belfast, narrowly lost to Abdel Aziz Mohammad and a dead, bloated donkey, which floated, feet up, across the finish line a length ahead of Domnhall. But McAuley got no medal. Indeed, I was the only Irish medal-winner: a silver, for turning up to cover the festival!
I deserved it too. Each day I was in Egypt, I had dutifully written a story on my Olivetti, taken it to the hotel’s reception, and left instructions that it be wired to Dublin. 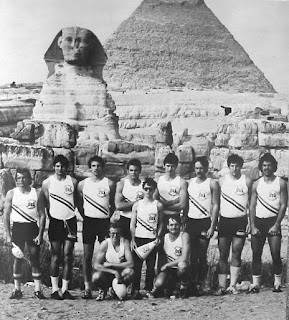 The Huskies at Giza, outside Cairo
We flew back to Paris on an otherwise empty Egypt-Air jumbo jet, missed our connection to London,  took a bus to Gare du Nord, a crowded train to Dunkirk, a rough ferry crossing to Dover, a train to London, and finally got a flight home to Dublin. In the process I had mislaid my passport and wallet, but retraced my steps and found them on a bus seat at Orly. It was only at Dublin Airport that I was “mugged”. Mr Macken, the mischievous stroke, informed me that his crew had commandeered my Olivetti from the carousel, and unless I handed over my silver medal for safe keeping in Trinity College’s archives (“We have to have something to show for this trip,” he explained, quite reasonably), I shouldn’t expect to ever see it again. The medal remains at Trinity College to this day, not too far distant from John Millington Synge's Blickensderfer 5.
I reached home, typewriter restored, exhausted, dirt-encrusted and feeling thoroughly enriched by my Egyptian experience. My editor called. Not one word of what I’d written on the Olivetti in Luxor or Cairo had reached Dublin. “Never mind,” said Tim Pat Coogan. “I hope you had a lovely break from your typewriter over Christmas.” Some break!
*Richard Davis Erickson, born in Arlington on December 29, 1935, died at Marysville on July 26, 2001, aged 65.


Tomorrow:  Round the World on a Typewriter
Posted by Robert Messenger at 23:05

What a pleasant surprise to read about this storied character on a blog from so far away! I graduated from UW in 2009 and saw my first Windermere cup races just last Spring!