I had no idea of the degree to which I was tempting fate last night by writing in such a frivolous way  about New Zealand's thieving parrot, the kea.
These marauding birds must be taken seriously, even in the growing darkness of late evening high in the South Island's mountain ranges.
Less than 24 hours after posting about the kea, in the very same spot I had mentioned, at Arthur's Pass on New Zealand's Southern Alps, I was fending off keas to protect the Kolibri. 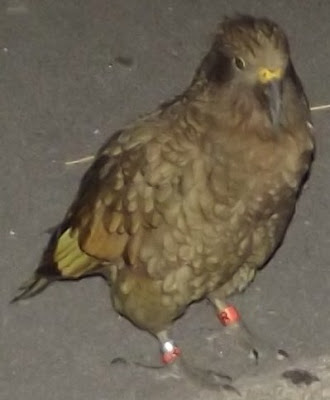 Forgive the quality of this photo, but it was taken in darkness tonight of the more confronting of the two keas at Arthur's Pass. These guys mean business.

Posted by Robert Messenger at 22:30

Clearly, The Kolibri has survived! Keep an eye on those sneeky bar-stools. They may have hidden away in the back of your car, anticipating a moment when you may be alone or asleep.

Ah, I see the internationally famous gang of feathered bandits are on the loose again! That Kea looks slightly annoyed to have been caught in the act, but also eerily cool with having his picture taken. Or is he used to pose for his mug shots? "Face the camera... now turn right... turn left..."

Those keas have good taste!!! Hahaha!

He who would cross the Bridge of Death Must answer me These questions three, Ere the other side he see:

Reminds me of the stories I've heard about macaques in India. They steal stuff all the time from tourists and natives alike.

Sounds like you were tempting fate and making life too easy for them. Maybe they are just waiting for a homecoming Kiwi with a Blickensderfer Featherweight?