The Life of a Typewriter Technician, by Michael Klein (2)

THE DAY I FELL INTO A 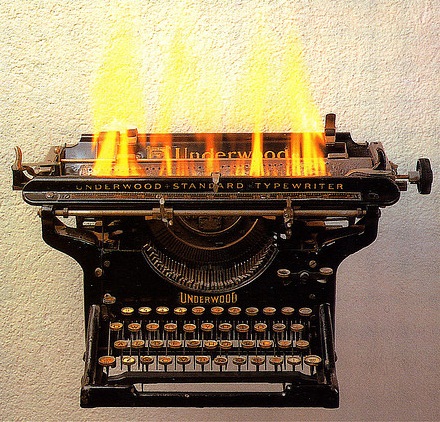 Hess Collection. A Hess would never allow a Royal to burn


I went down, down, down,
and the flames grew higher
That typebasket of fire.
By MICHAEL KLEIN
I had just started out as a typewriter mechanic and in my first week of work, my colleague took me into a wonderful shop called Ames Agencies. This shop supplied the office equipment trade with tools and platen refurbishment services. They had a magnificent assortment of specialist tools, the like of which you would never find in any hardware store.
Brands were stocked such as Excellite, Facom, Druesche, Knippex, all of extremely high workmanship and precision built – they just felt right in the hand. Here are some of the tools that I still proudly own (from left, blowtorch, peening tool, type alignment tool and roller pliers). 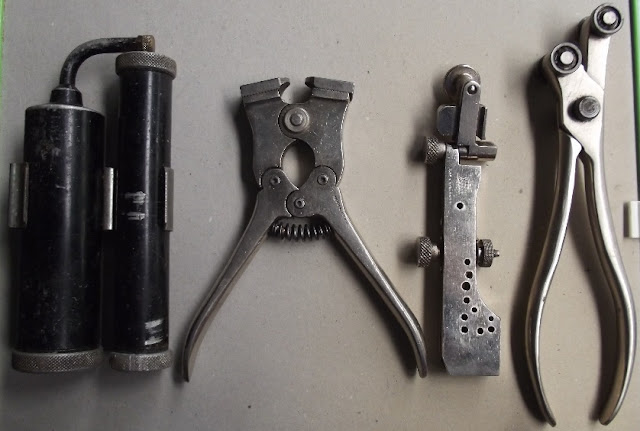 These particular tools are all used to align the height, depth and angle of the typeslugs as they hit the paper. It is a near impossible task to get the typefaces aligned to the same precision as they come from the factory (which is what forensic scientists used to exploit when identifying which typewriter created a particular document, as typewriters all wear at varying rates and so develop a unique “signature”).
It was an unfortunate incident with this blowtorch that I will relate now.
As a young and inexperienced typewriter technician, I was in an office trying to align a typeslug that had come adrift (a common fault, as they are only soldered onto the tip of the typebar and with constant pounding they do come loose). I had practised many a time back in the workshop the use of my trusty blowtorch to perform the re-soldering job. In fact I proudly considered myself somewhat of a deft hand at it.
However, this was my first attempt out in a customer’s office. Unfortunately, there is a slight design fault with this particular brand of blowtorch, which ran on methylated spirits. In those days air-conditioning in a car was not common and on a hot, sunny day, the tool case in the back of the panel van could get very hot between jobs, especially if it sat in the sun.
Well - a blowtorch stored in such a situation can develop internal pressure in the heat, and if subsequently used under such circumstances can erupt in quite an impressive plume of flames!
So what does a naive and somewhat shy young lad do to preserve what little dignity he has left in such a situation in front of a pretty young lass of a typist? All I could do was to try and put out the fire with my cleaning rag. Picture this – instead of putting out the flames, the rag (which was soaked in an even more volatile cleaning fluid, Shellite) causes an even more impressive bonfire. By now I’m panicking (and I suspect also the typist, and now her manager, who is poking his head into the office to see what the commotion is all about).
In the turmoil that fast escalated, all I could think of was to toss the flaming cleaning cloth into the wastepaper basket on the floor. Well, you can now imagine how the situation developed, as there were papers in said bin.
This incident was for some inexplicable reason always brought up at our weekly social drinking sessions, held with my colleagues. It gave them much amusement and myself much embarrassment for many months. 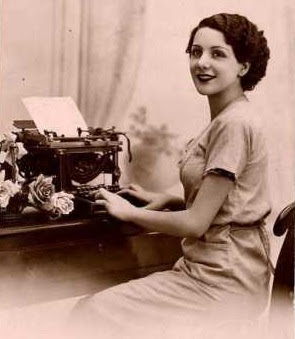 Oh Michael, light my fire!
Posted by Robert Messenger at 12:59

Thank you for the story.

What an embarrassment! Good thing you didn't burn the building down and the typist with it.

I think everyone who had the need to use the dreaded meth blow torch has a similar experience...When they worked, they worked well, but when they misbehaved, oh boy.... Enjoyed reading this, brought back memories. (Facit typewriters)