3D movie star typewriter back from Beyond the Edge 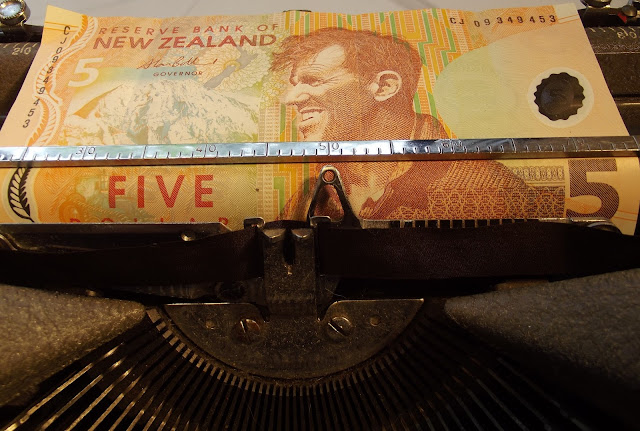 The "Empire Aristocrat" portable typewriter returned from filming at Aoraki across the Tasman with a New Zealand $5 note stuck in its platen. To understand why, look at the photo below of actor Chad Moffitt, who is playing Sir Edmund Hillary in the movie, holding the NZ $5 note. See the distinct likeness: 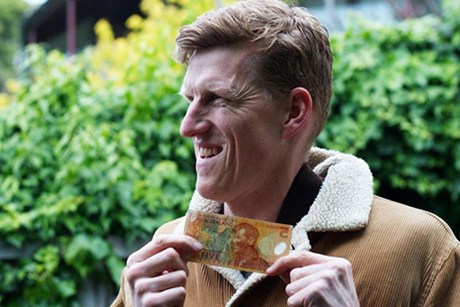 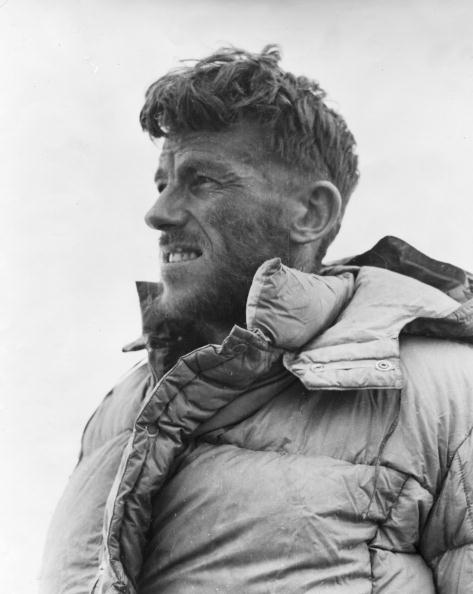 Beyond the Edge is the name of a 3D movie being made in the Aoraki-Mount Cook National Park in the Southern Alps of New Zealand. It will mark the 60th anniversary of Sir Edmund Hillary and Sherpa Tenzing Norgay conquering Mount Everest in 1953. The successful British expedition was led by Sir John Hunt, who apparently used an Empire Aristocrat portable typewriter in the Himalayas. 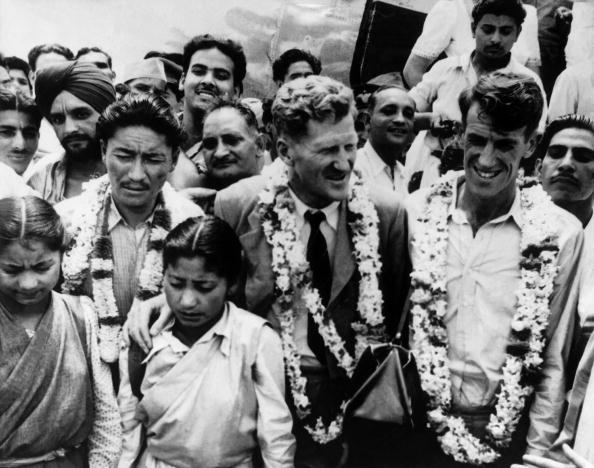 Sherpa Tenzing, John Hunt and Edmund Hillary arrive at Safdarjang Airport on July 1, 1953, after the ascent of  Everest. Hunt is carrying his typewriter in his briefcase.

Aoraki, south-east of Greymouth. It was the sighting of the Southern Alps that led the Māori to call New Zealand Aotearoa, "The Land of the Long White Cloud".
The filmmakers are determined to be as authentic as they possibly can and approached me to supply an Empire Aristocrat. I didn't have one that I was willing to part with and send across the Tasman Sea to New Zealand for the filming. Instead I "mocked up" a Hermes Baby to look exactly like an Empire Aristocrat, adding some red coloured keytops and a decal. Returning the machine to me, propsmaster Grace Mok said, "Thanks again for your wonderful assistance and your beautiful typewriter. We loved the typewriter!  It's always so great for a propsmaster to be able to obtain the most authentic prop to the cause." 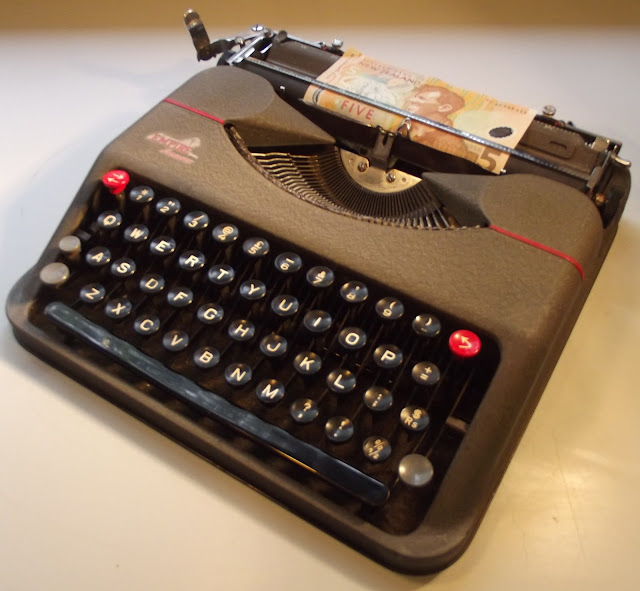 The film production team are under the watchful of people like New Zealand Alpine Club boss Sam Newton, who "isn’t holding his breath" about the accuracy of details. Likewise Adventure Consultants CEO Guy Cotter said, "Most people close to mountaineering probably don’t have a whole lot of faith that a good climbing movie will ever be made. We’ve seen some fairly trashy renditions of what went on in ‘96, so it is actually good to see that there are some real professionals who want to make a real story of it rather than just doing the standard drama that appeals to everyone’s preconceived notions of what mountaineers are like.” Newton agreed: "The Eiger Sanction with Clint Eastwood, Cliffhanger with Sylvester Stallone and the more recent Vertical Limit have all been rubbish. Recent history is littered with some pretty awful climbing films. Touching the Void, which was a film adaption of Joe Simpson’s book, was pretty good so it can be done."
Newton said the most important thing he hopes filmmakers get right in Beyond the Edge is the contribution of Kiwi George Lowe and the other “unsung heroes of the team” - such as Hunt. 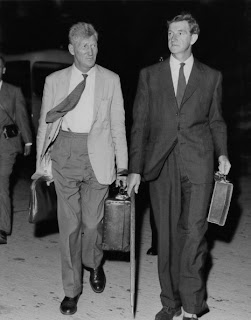 John Hunt and George Lowe after a British-Russian expedition in Central Asia. 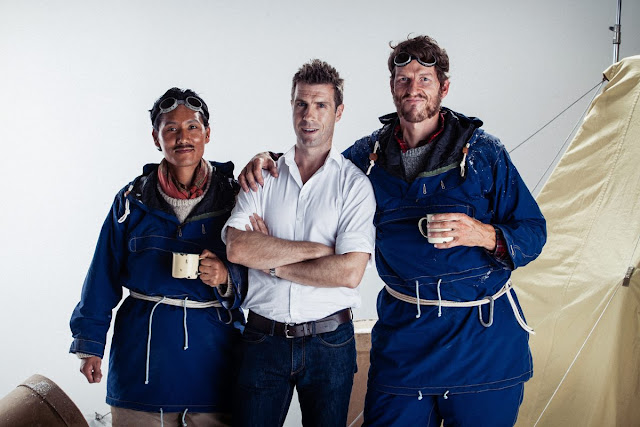 From left, Sonam Sherpa, Matthew Metcalfe and Chad Moffitt.
General Film Corporation (Giselle, Love Birds, Dean Spanley) announced the two lead roles of Hillary and Tenzing are being played by Nelson actor Chad Moffitt and Nepalese-born Mount Cook resident Sonam Sherpa. Producer Matthew Metcalfe said, "Chad's a dead-ringer; friends and family of the late Sir Ed have remarked upon it. He also auditioned the best and showed the greatest understanding of the role." Writer and director Leanne Pooley added, "From the first time Chad auditioned I knew he was special and would be right for the role." 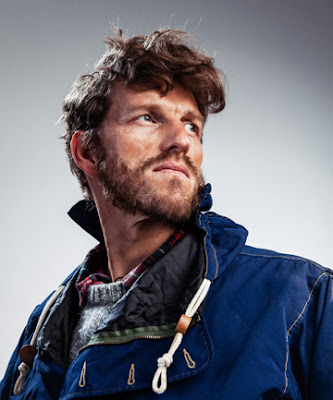 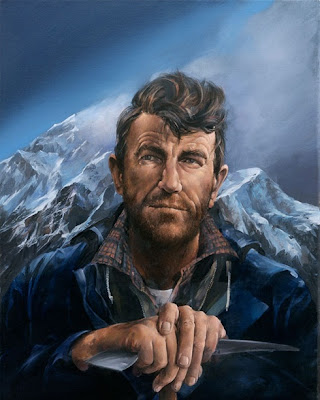 Metcalfe said, "After an exhaustive search we were thrilled to discover Chad and Sonam. They will be in great hands with a team of talented world-class Kiwi filmmakers, including award-winning documentary maker Pooley, Oscar-winning production designer Grant Major (The Lord of the Rings: Return of the King) and acclaimed New Zealand cinematographer, Richard Bluck (the Rings trilogy, Avatar and The Hobbit)."
The Royal Geographical Society in London, which supported the 1953 Everest expedition, is supplying photographs and original materials from its archives. The film is due for completion in September and will be released late in the year. 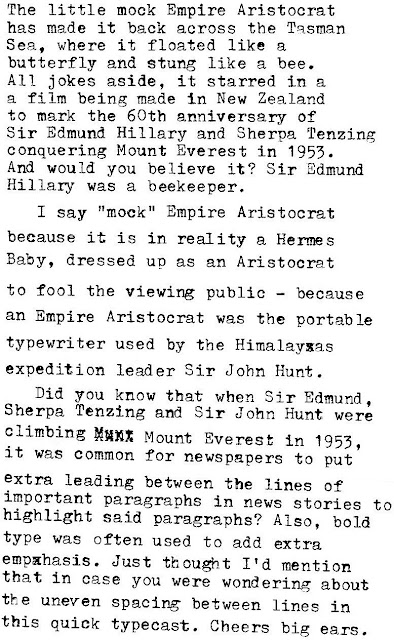 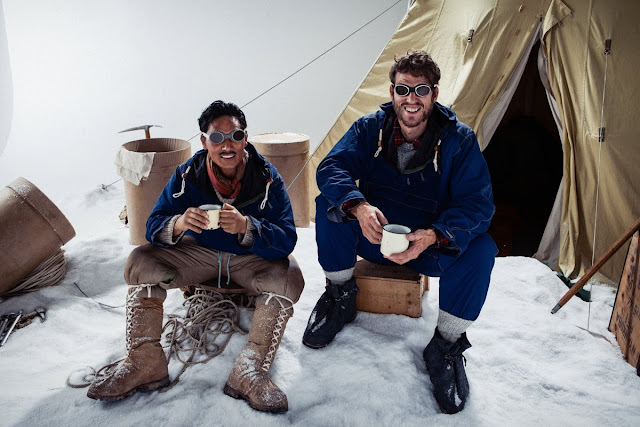 On the set of Beyond the Edge.

Posted by Robert Messenger at 15:47

That is absolutely fantastic, Robert. A good film about the expedition is sorely needed. I had always hoped that Jan Morris' account 'Coronation Everest' would be turned into a screenplay. The lengths they went to secretly transmit the success and scoop other news outlets was fascinating. Some of my favourite memories are from climbing around Aoraki (haven't done an ascent of Aoraki itself yet thought).

Brilliant. And I'm eagerly looking forward to this movie. Not just for the typewriters!

Amazing, Moffitt looks exactly like Hillary! I hope the rest of the film will be just as convincing, and in 3D it ought to be really exciting.