How Good is the Typosphere? 5TE Works, Thanks to Ted

Michael Clemens commented a couple of weeks ago on the wonders of the Typosphere - the way it allows typewriter lovers across the globe to share information and help one another out. Another excellent example came this morning, when Ted Munk, in a comment on my Green Typewriter Day post, pointed me in the right direction toward fixing my "new" Smith-Corona 5TE electric portable.
Ted had actually read my typecast, which was about using a green typewriter ribbon in a green Underwood Universal. As an aside, I had mentioned that the coloured ribbons arrived from California at the same time as the pink 5TE. When I switched the 5TE on, sadly, all the keys seemed to want to type at once.
Ted commented, "I recently dealt with a 5TE with the 'all keys want to go at once' issue. The fix is easy: just remove the aluminum plate underneath the front of the machine (one screw, and you just lever out the plate tabs from the front rubber feet mounts). Under the plate is where the rotating bar trips the keylevers. Carefully clean and lubricate all of these linkages and ensure they aren't sticking open, and the problem should go away after the linkages free up." 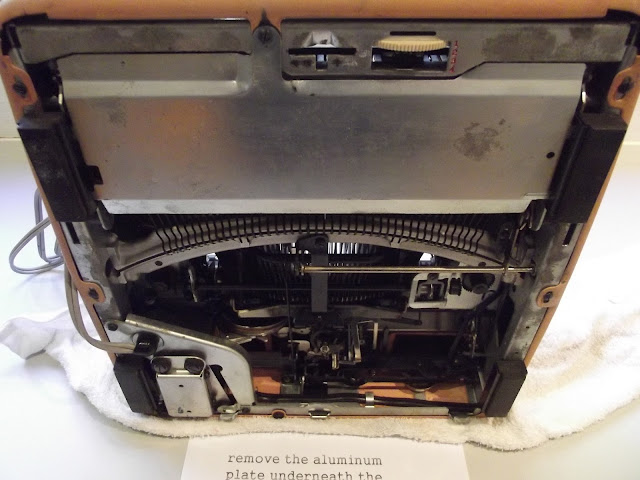 I printed out Ted's instructions, went downstairs and did exactly as he advised. It worked! I had to reattach half a dozen of the tiny springs, which had presumably come unattached due to the pressure put on them by gunked-up levers. That took a little while (a couple of the springs disappeared, so I used springs from a parts Olivetti Studio 45 and cut them down to the smaller size).  Meanwhile, however, I could see precisely what Ted meant about the linkages sticking open. 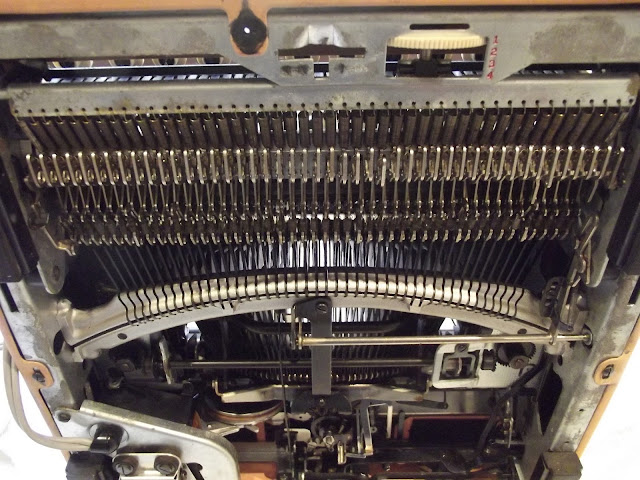 It is easy to see the stuck linkages (mostly right) here 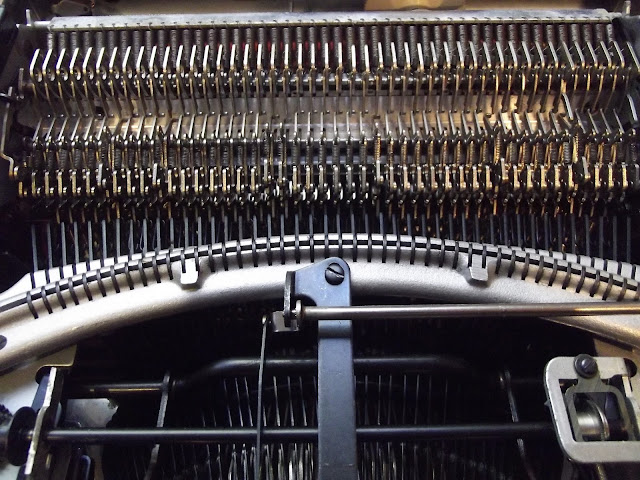 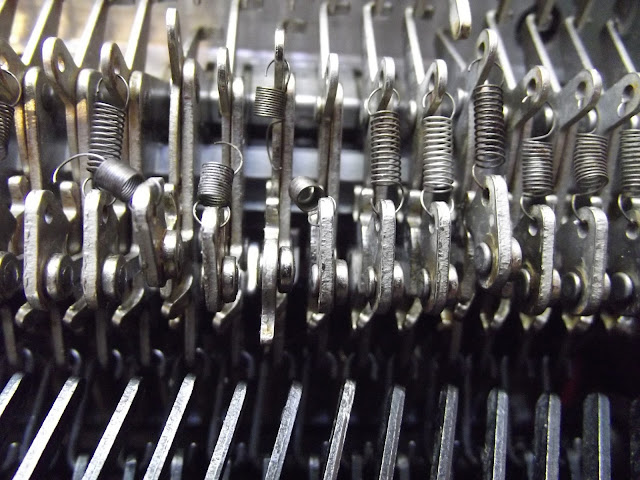 Here are examples of the tiny springs which had come unattached. In one case (centre) the linkage connection has turned down, away from where it should be. 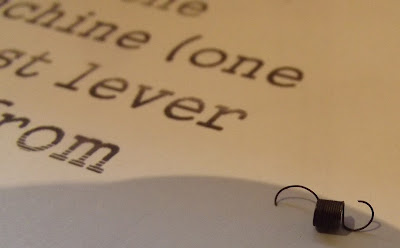 One of the small springs
With the Reverend Mr Ted's guidance from above, the 5TE was soon working fine. I only switched it on briefly, as I'm a bit worried about the voltage change, after switching the power plug to an Australian three-point plug from the original two-point plug. I don't want to burn out the little old motor. The typebars had been operating together at a fierce rate of knots before I applied the Munk magic. But I was still able to check that everything was going as it should, including the small rubber belts.

Posted by Robert Messenger at 21:44

Is it a British two point plug? Or American? I'm just guessing that it is an American.

Nice work. I'm hoping to see this machine in working order sometime in the near future. And, Ted's great, isn't he!

You can find the electric specs of your machine in a label attached to the rear panel, right under the carriage (odd place, I know). There you should see the voltage and frequency on which it is meant to work. If it says 120 V 50 Hz or something like that, the motor is designed for the American electric system; no big deal, you could use a voltage converter of the sorts sold in gadgetry stores for the use of travellers visiting Oz with their American-voltage laptops.

Another, more radical but also more permanent solution, would be to take the motor to a place where they fix them (I'm thinking perhaps a place where they fix washing machines) and have it upgraded to the proper voltage; it would be a matter of changing the copper threadings of the stator and change the power cable, complete with plug.

I too look forward to see pictures of that machine!

Just in case this helps: http://modernidadyobsolescencia.blogspot.mx/2013/04/unsolicited-help-for-robert-messenger.html

These little 5TEs really are neat little machines. They look just like the manual Super-5's, but internally about the only thing similar between the two is the carriage assembly, the segment assembly and most of the body panels.

For an electric, though, they are pretty easy to understand and fix, as long as that drive belt stays together. :D

Very cool. I've seen a few of these in questionable shape and won't be as intimidated by them in the future.