Typewriter in Bob Dylan's Back Pages 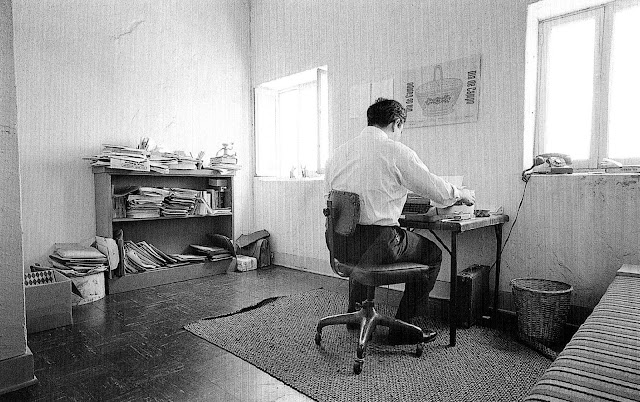 i went home an began writin
Four-and-a-half years ago, Simon & Schuster published a book called Hollywood Foto-Rhetoric: The Lost Manuscript, with "text by Bob Dylan". Despite this fact, it didn't sell. I picked a mint condition copy up at one of those bargain basement places, for about $5. I was curious that a book with "text by Bob Dylan" and including a photograph of a man sitting at a Remington-Rand portable typewriter had been, at least to me, so obscure (and selling, new, at such a low price). At one time or another I think I have owned just about every book written about or by Dylan. 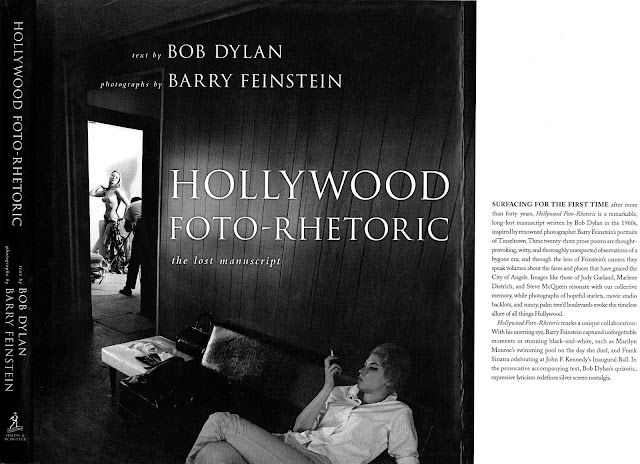 I discovered in a review written by The New York Times' Charles McGrath, under the heading "His Back Pages", that this book contained what Dylan himself, "in characteristic fashion had forgotten all about ... a series of 23 poems he wrote in the early 1960s to accompany a collection of Hollywood photographs by Barry Feinstein".
McGrath said the "Dylan archives [are] a cavernous storage space so full of odds and ends that even Dylan himself doesn’t know what’s in there. Just when you think the place has been emptied out, something new - a bootleg tape, some video footage, a collection of sketches and doodles - pops to light." McGrath called the tome "one of the oddest coffee-table books to come along in a while."

The reviewer said "That 'f' in 'foto-rhetoric' leads you to anticipate a volume in tabloidy, Hollywood Confidential style, and there are a couple of glimpses of weird Kenneth Anger-like Hollywood. But most of the photographs are more moody, even arty, than they are leering or sensational. Feinstein went on to become the court photographer of rock ’n’ roll royalty, but in the early ’60s he was working as a studio flunky for the mogul Harry Cohn, and he took these pictures backstage on movie sets or driving around town after hours.  They’re suffused with a kind of anti­glamour that was probably meant to be tough and unflinching at the time but now seems almost tender."
"What Dylan brings to this vision is a kind of antic surrealism, at times reminiscent of the liner notes he wrote for Highway 61 Revisited ... he is reluctant to call the text poetry. But they certainly look and read like poems, in tense, narrow lines, of just one or two beats sometimes, that stack on the page ...
"The style seems learned partly from the Beats, terse and jangly, with no capitalisation and lots of dropped letters: But the voice is reliably Dylanesque: Occasionally a poem will explicitly comment on the accompanying photograph. 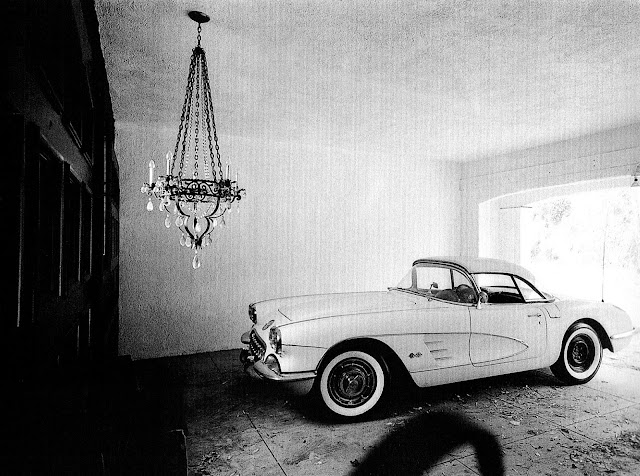 crashin the sportscar into the chandelier 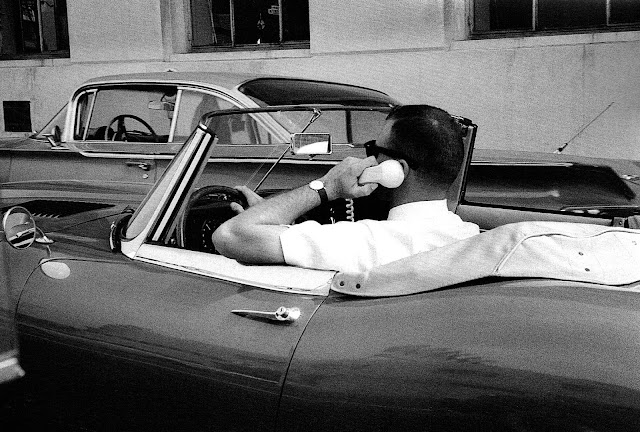 i called up my best friend 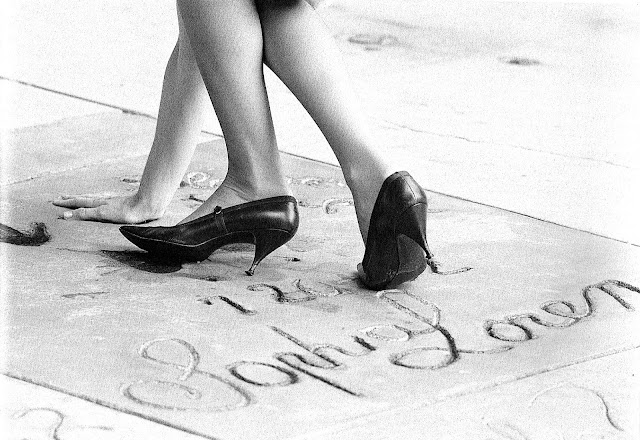 somebody wiped their feet on me 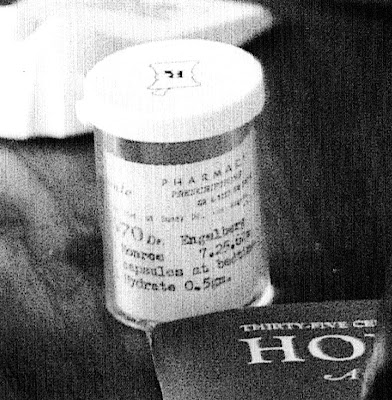 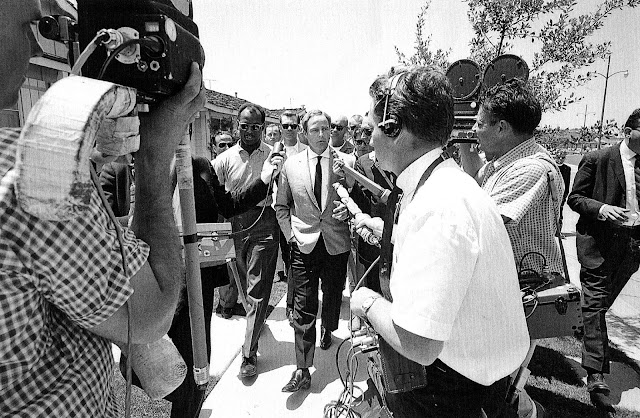 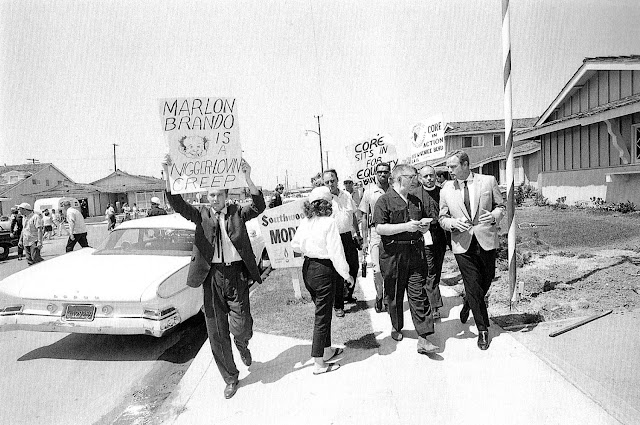 i really have nothing against marlon brando
"More often the poems take off on the theme of a photo or enact a scenario ... suggested by it. And sometimes the relation of text to picture is pretty oblique.
"Most of these poems, it must be said, read like the work of just a few moments. They lack the complexity, the emotional power of some of the great Dylan song lyrics [which] ­really can stand comparison to Marlowe, Keats and Tenny­son. They’re mostly riffs, the poetic equivalent of scale playing. On the other hand, you can read these little verses without humming the tune in your head, and they allow you to appreciate Dylan’s verbal dexterity — his gift for rhyme and free association — in isolation, as it were. This is the kind of quickness and improvisatory brilliance that allowed those great lyrics to happen. Nor is the text of Hollywood Foto-Rhetoric entirely rhetorical. The best poems add up to a wary meditation on fame and celebrity, on the disguises we all put on — themes to which he would later return."

Posted by Robert Messenger at 10:22