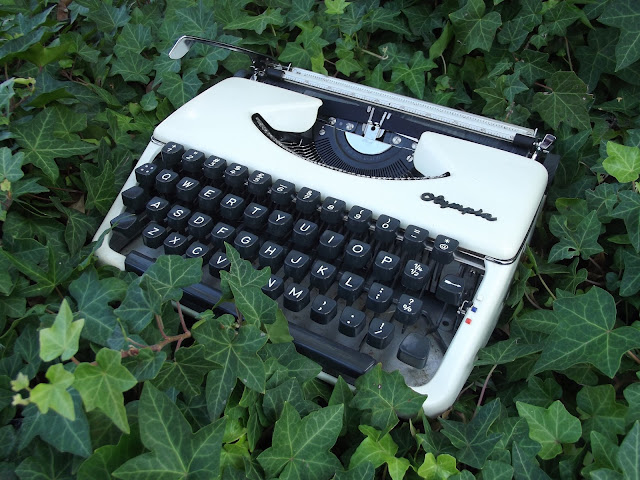 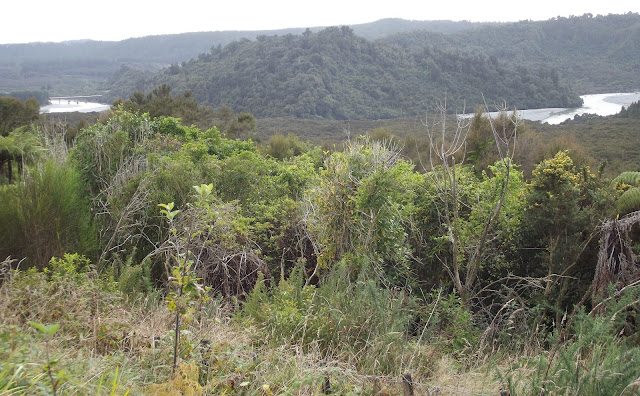 The countryside is not exactly parched, yet, but the winding Taramakua River is clearly well below normal levels. See it in full flow below: 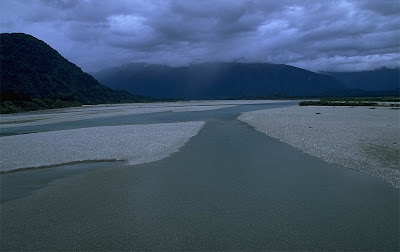 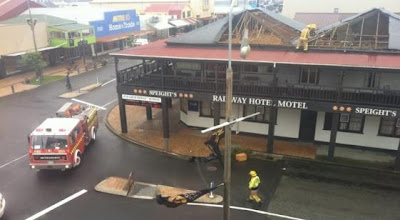 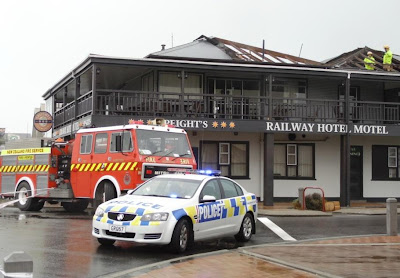 Scenes in Hokitika after the mini-tornado hit on Easter Sunday.
It tore through the town while we were there. 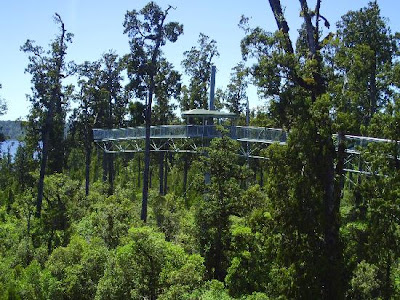 The tree tops walk, near Rimu, on a good day 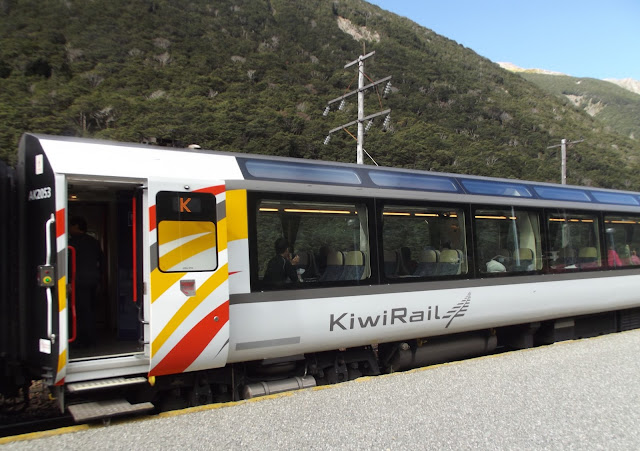 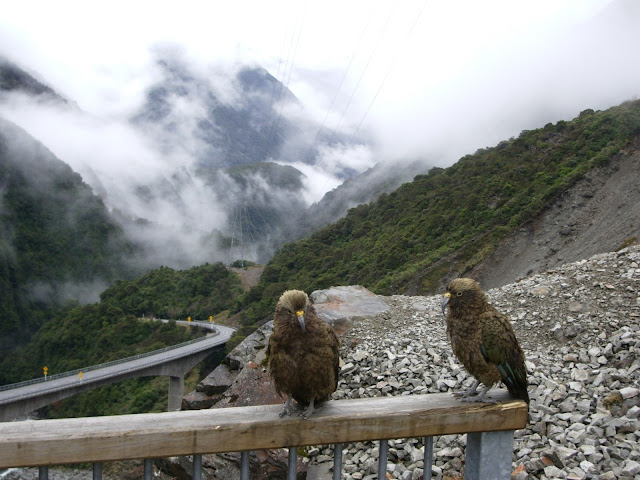 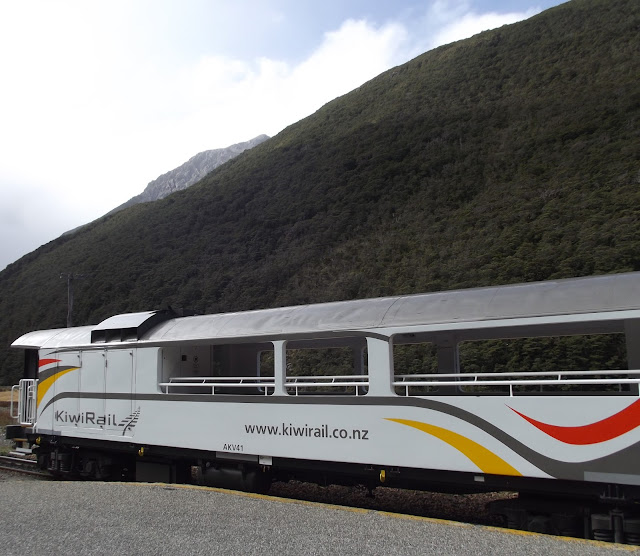 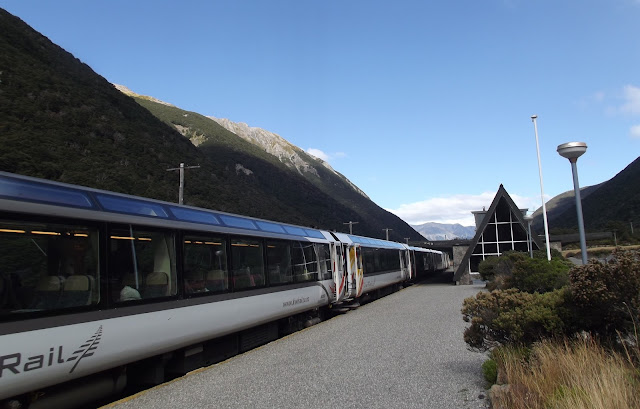 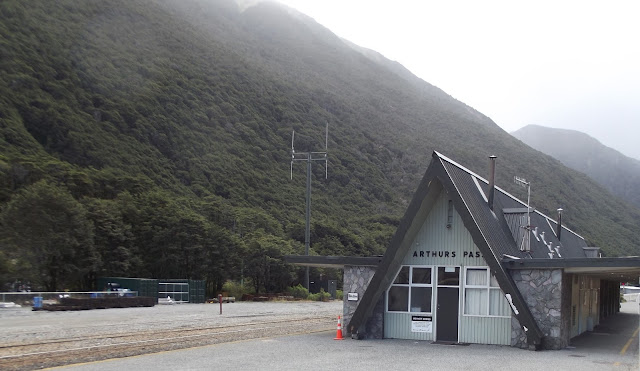 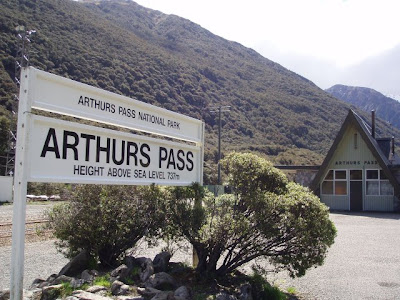 In winter, this entire area would be covered in snow (see image below).
After all, it is 2500 feet above sea level. 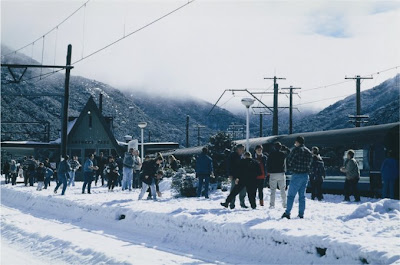 Below, snowless scenes from my train journey yesterday: 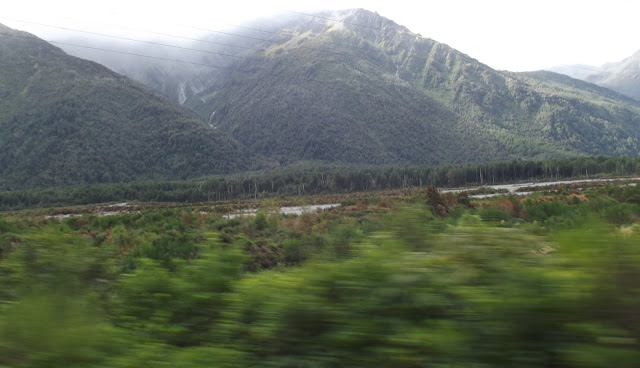 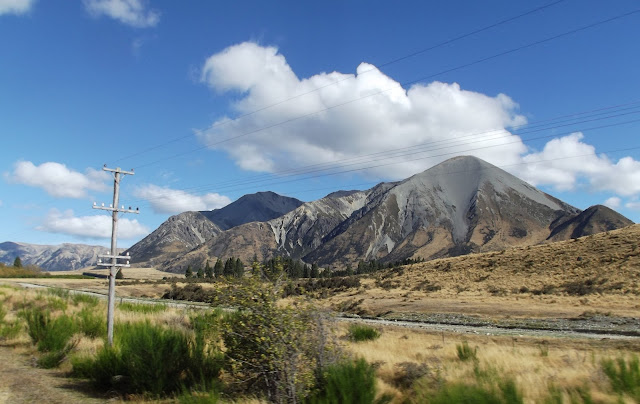 This was what the Southern Alps looked like from the air when I flew eastward from Australia across the Tasman, approaching the Canterbury Plains and Christchurch: 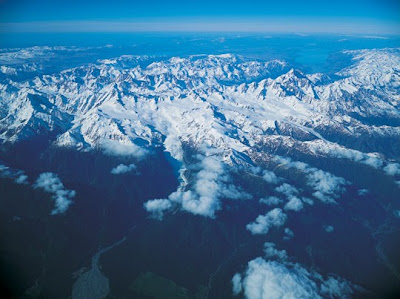 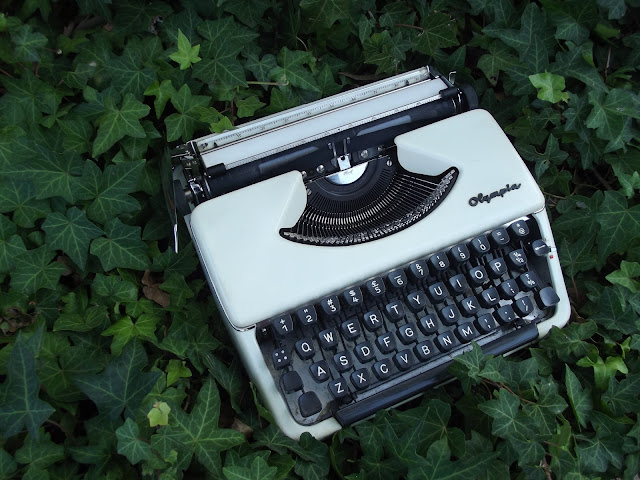 A typical New Zealand scene: In Kumara, child-size rugby goalposts on a street verge. My old football-playing friend Barney O'Connell pretends to kick for goal before the appreciative audience of a small dog. 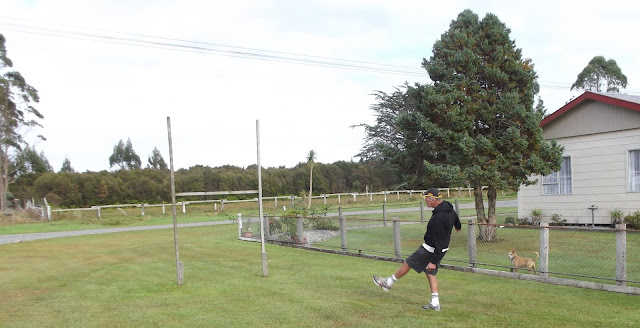 At the extremely interesting Hokitika Museum, I discovered that at one time (possibly in the 1930s?) attempts were made to export whitebait (inanga) in tins. One of these brands won a gold medal at some exhibition, but it must have tasted absolutely awful!: 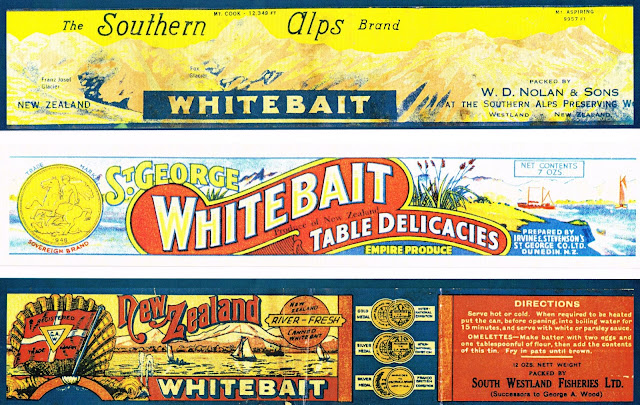 Looking down the Grey River toward the town centre of Greymouth (right)
and the Grey Valley from the sea. 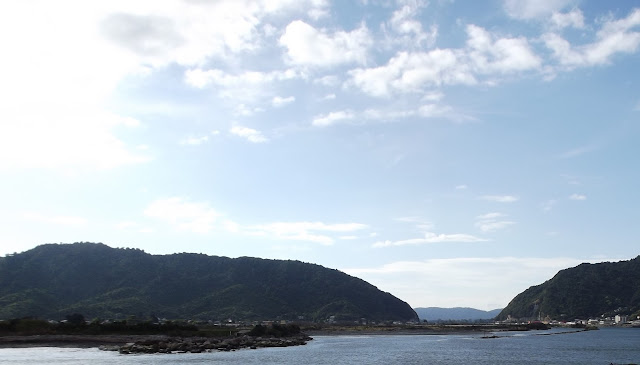 The treacherous Grey River bar, which has claimed so many lives. The spitheads were built under the direction of Irish engineer Charles Yelverton O'Connor, who also built the incredible Kalgoorlie pipeline. 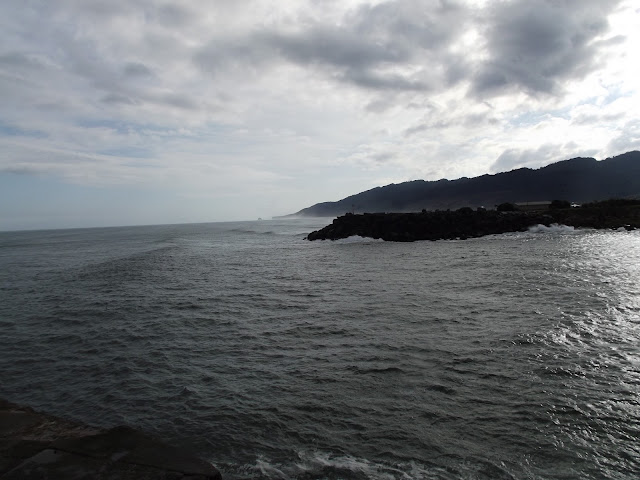 Small fishing trawlers sit in the lagoon harbour between Greymouth and the seaside suburb of Blaketown (where I grew up). Once there was an industry for crayfishing (exclusively for export to the US, tails-only) in the Fiordland region of Far South Westland-Western Otago.
My late father made an award-winning documentary about this industry in 1957. 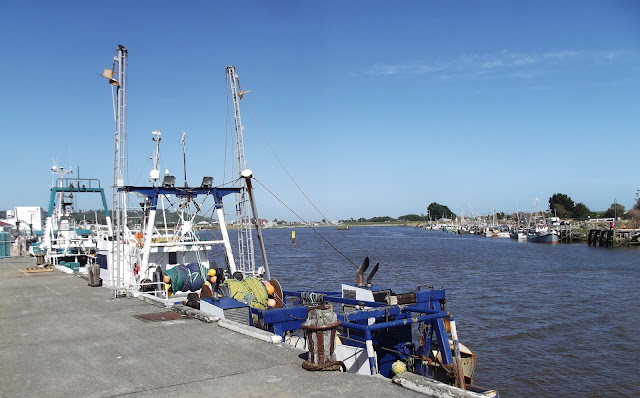 Looking back up the Grey River from the town centre (left) toward the bar:

These old power poles have been carved to represent the drills used in the West Coast coal mining industry. This is one of many tributes in the area to coalminers, so many of whom lost their lives. 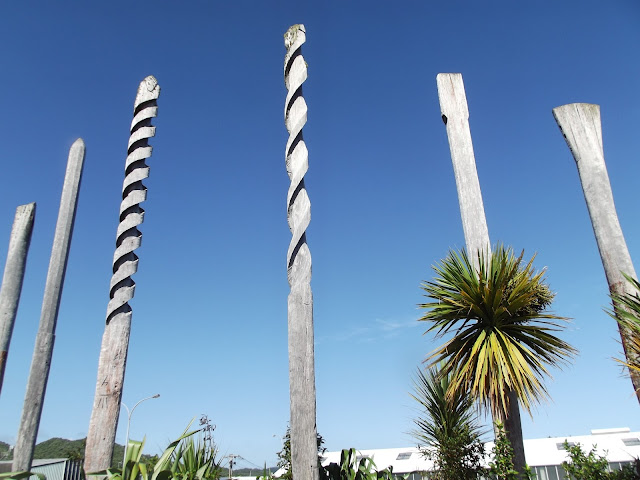 As if a very high annual rainfall, flooding, tornadoes (one in 2003 wrecked the home I grew up in) and many mine disasters were not enough to put up with, the West Coast is on a major faultline and prone to regular earthquakes. I went through a big one in 1962: 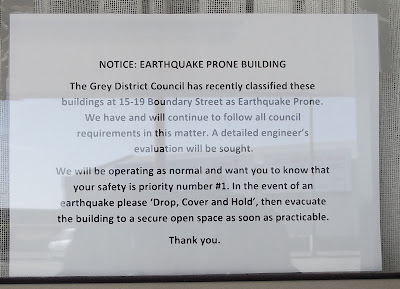 The downtown tailoring business started by my late father and carried on by my brother was flooded twice in the 1980s. 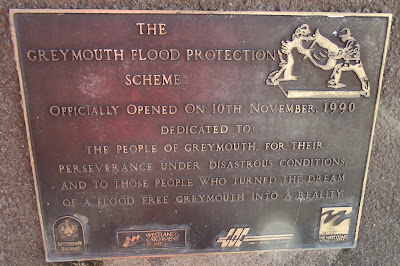 This plaque describes the 1860 purchase of the West Coast by the European from the Maori. Behind it is an example of the rock from which the greenstone so treasured by the Maori (and by tourists today) is extracted: 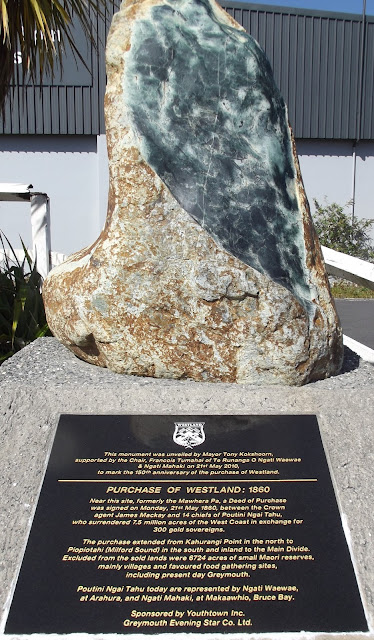 Posted by Robert Messenger at 14:08

You and your predecessors certainly packed a lot of action into a (relatively) short history!

I am troubled by the weather report, though. Humans really seem to have fouled this planet up.

Such a beautiful part of the world. I must get out there sometime.