The Old-Age Pensioner and his Oliver Portable Typewriters 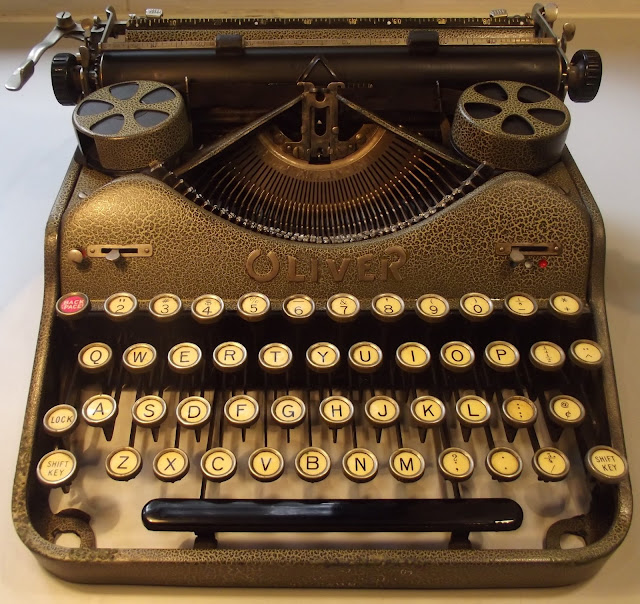 Back home in Canberra, Australia, in time to celebrate my 65th. Only a few days ago I was in Kumara, New Zealand, singing the praises of that town's first mayor, Richard John Seddon. "King Dick", as he was known, went on to become a pioneering New Zealand Prime Minister who introduced female suffrage and, in 1898, gave the world the old-age pension. As of today I qualify for one. Arise, Sir Richard! 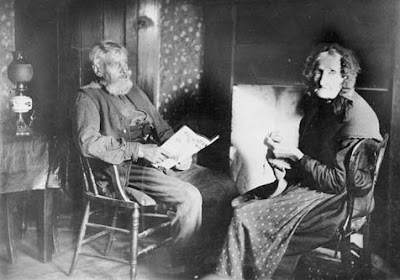 This photograph was one of a series taken by Auckland photographer Enos Silvanus Pegler after the passing of the Old-Age Pensions Act 1898.

This cartoon depicts Seddon sleeping at the Table of the House of Parliament in Wellington while the Old-Age Pensions Bill was in Committee of the Whole House on the night of September 23, 1898. A major stonewall occurred around this legislation. Seddon had introduced the Bill on September 21 and it was debated continuously in committee for 90 hours. More than 1400 speeches were delivered. Seddon slumbered during parts of the debates, spreading an opossum-skin rug over his lap and resting his head on a crimson cushion. Arise, Sir Richard! 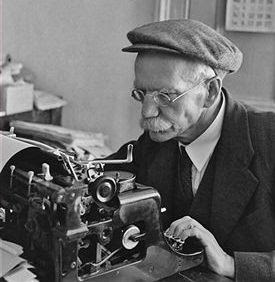 It goes without saying, at least for my former colleagues, that I covered this debate for The Greymouth Evening Star. The above photograph was taken of me re-typing my notes this morning.
One great thing about coming home after some time away is the frenzy of opening typewriter-related packages. Among the items awaiting me were a fantastic Canadian-made Remette and the latest edition of ETCetera, the March 2013 issue, the first edited by Alan Seaver. 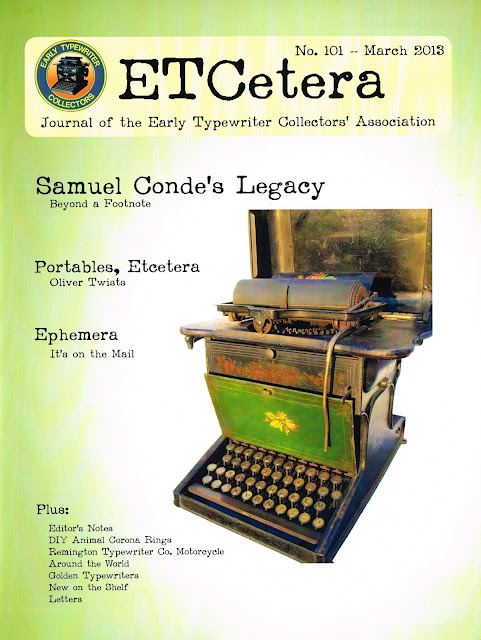 In it is the now regular quarterly "Portables, ETCetera" column from me, this one relating to Oliver portable typewriters ("Oliver Twists"). 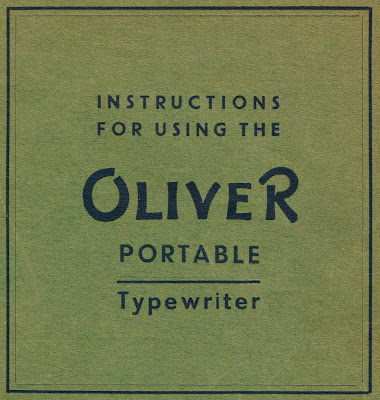 I was thus inspired to get out 12 of my collection of Oliver portables and photograph them. Here they are in approximate chronological order, starting with this Italian-made crocodile (or snake?) skin early 1930s model. I get the impression from Georg Sommeregger's comments that Georg believes this may have been designed by Giuseppe Prezioso, before Prezioso joined Paillard (Hermes) in Switzerland: 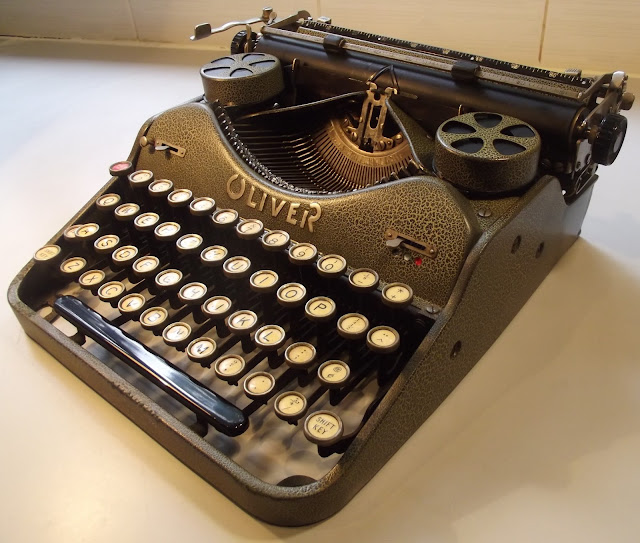 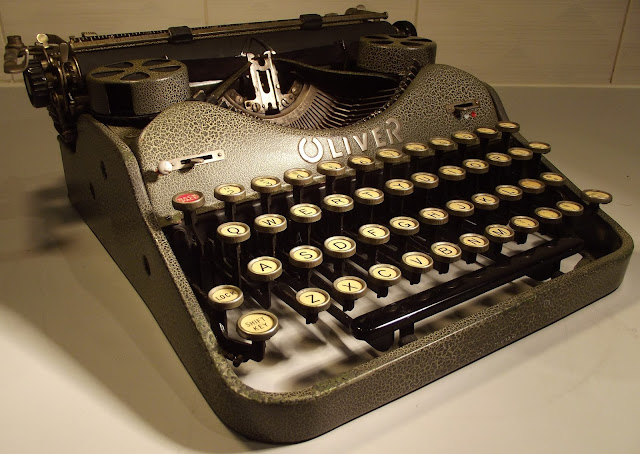 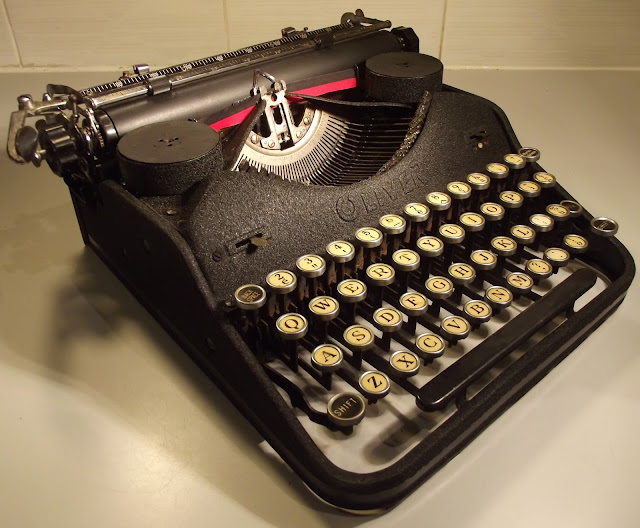 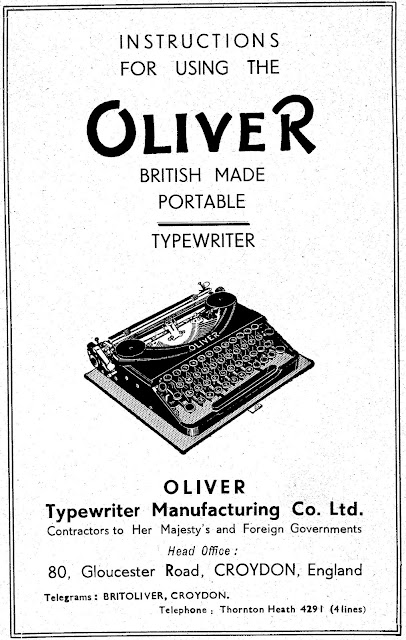 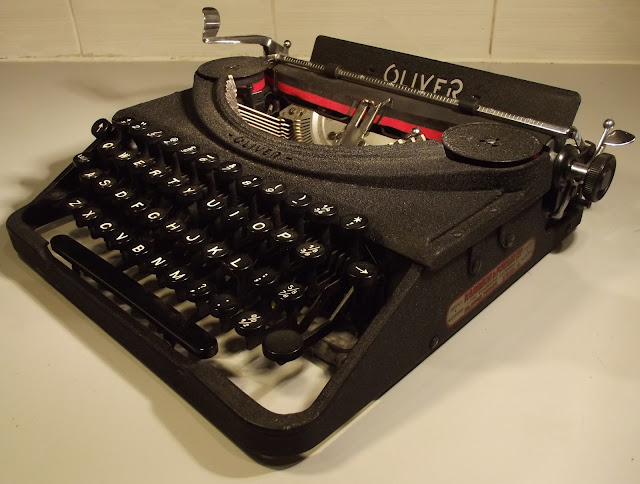 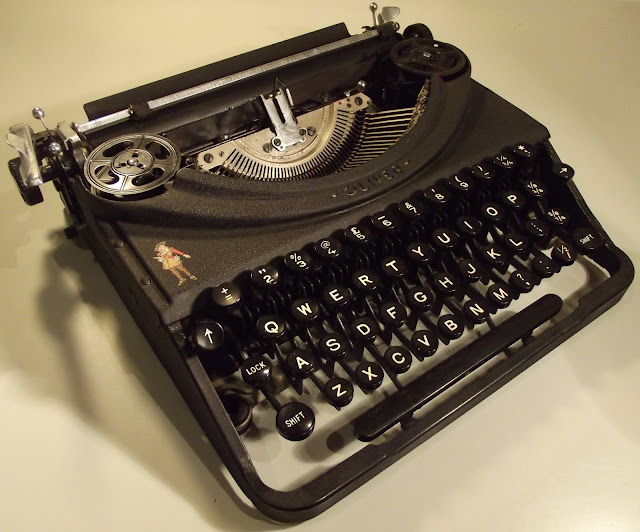 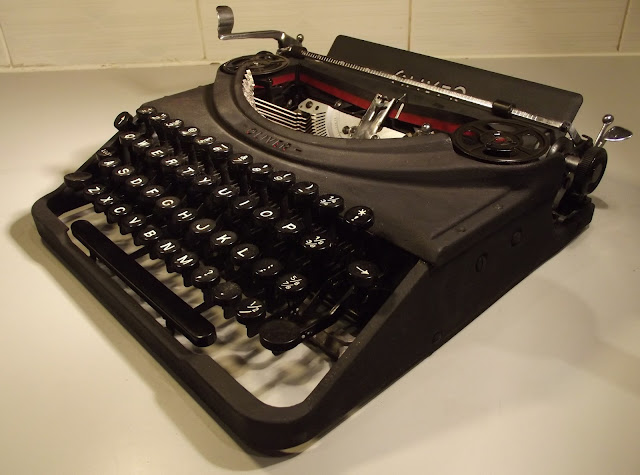 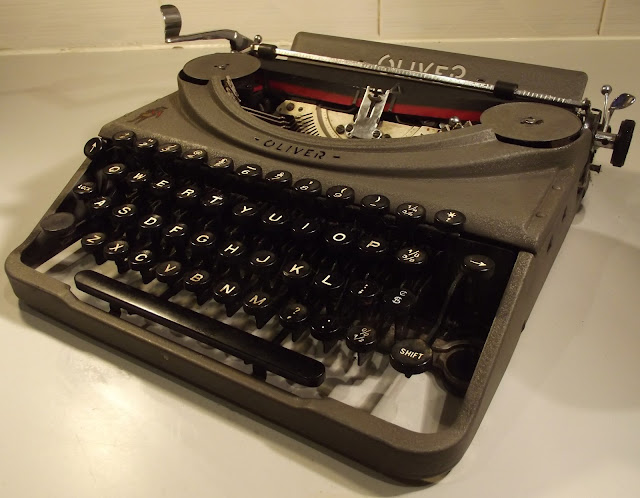 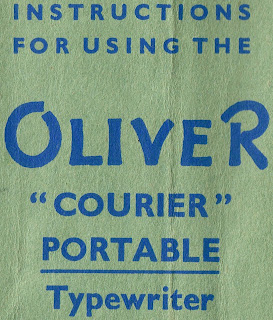 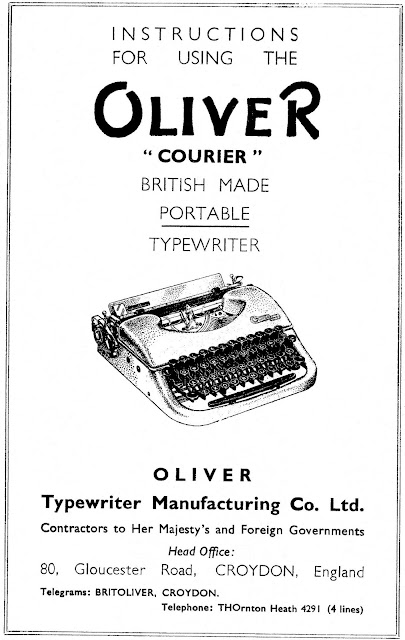 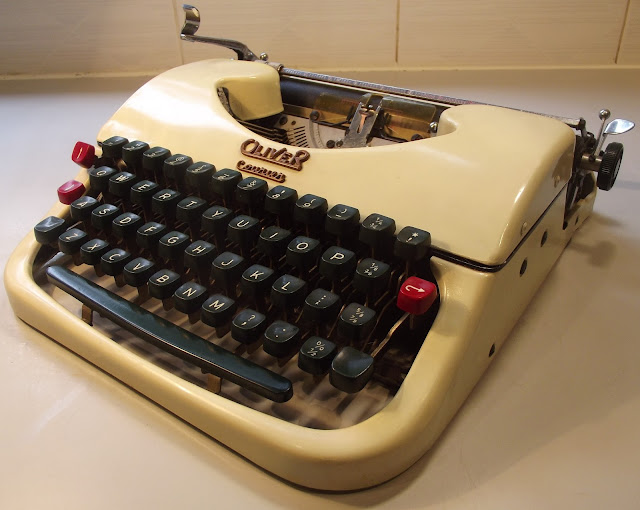 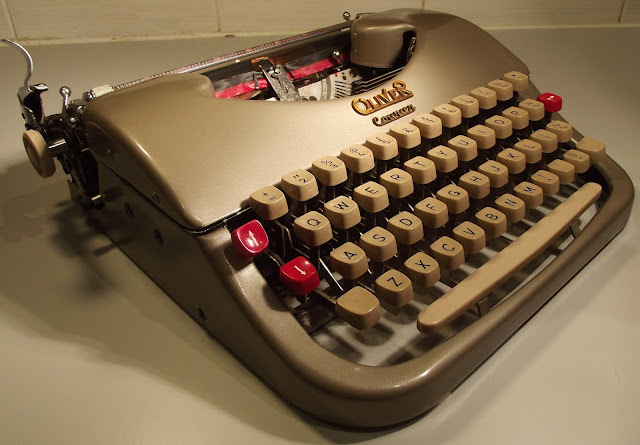 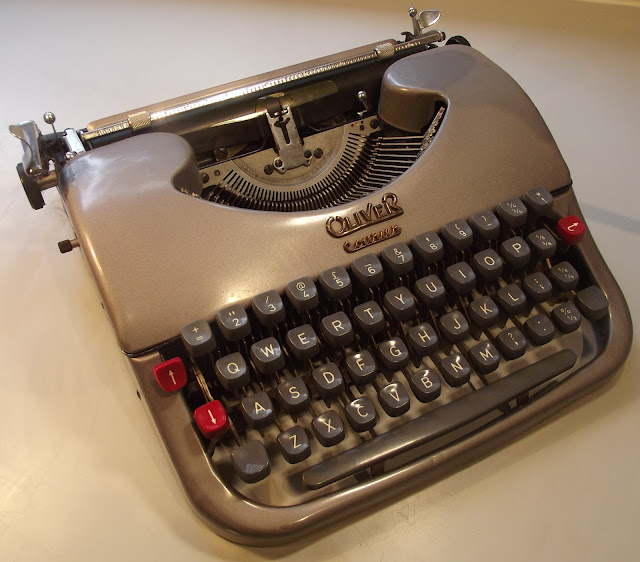 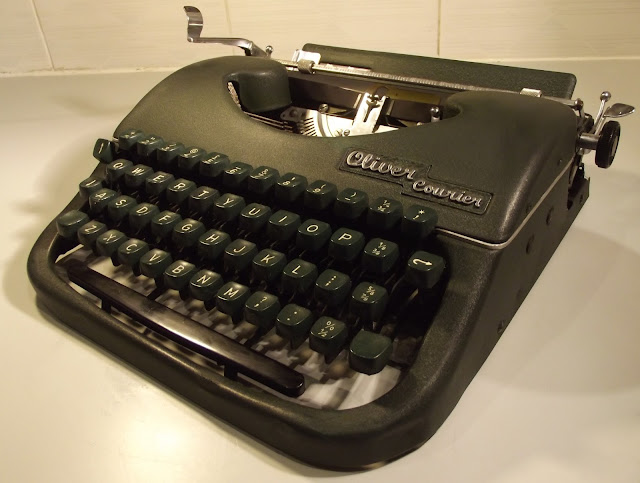 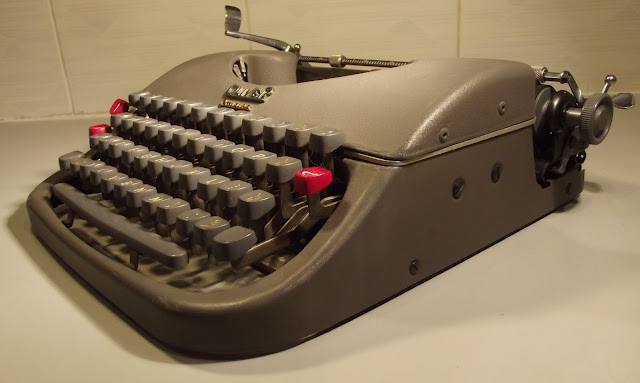 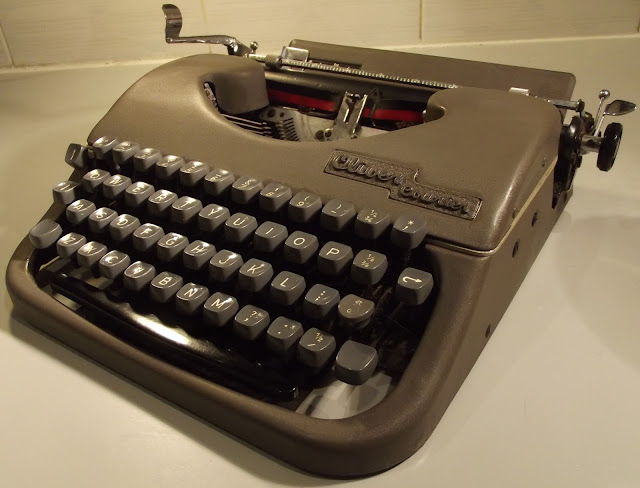 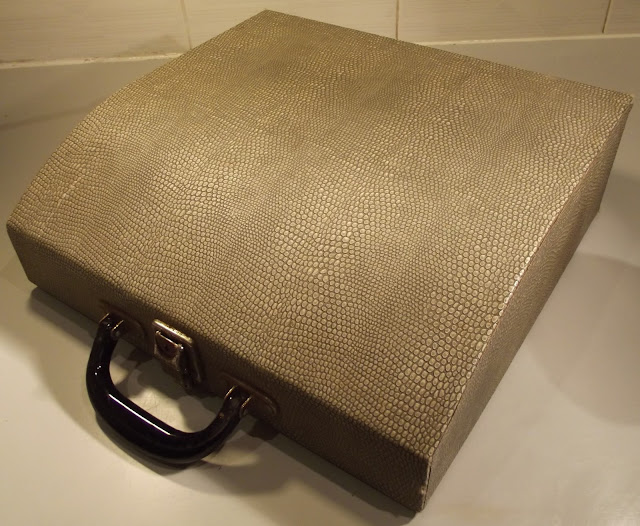 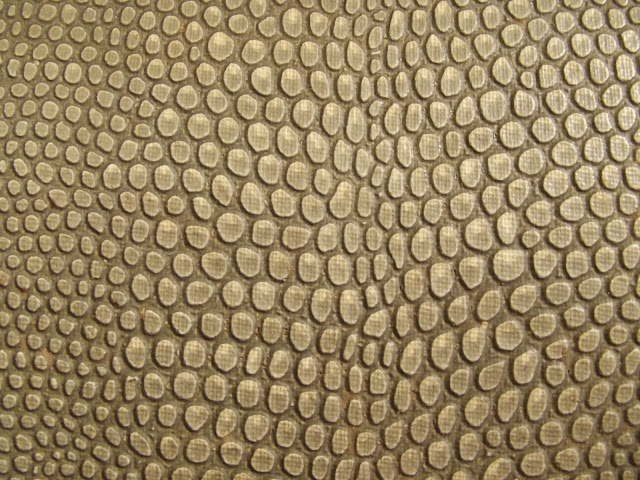 Posted by Robert Messenger at 11:55

Those are some great looking portables.

Welcome back to Canberra, and Happy LXVth Birthday!

Those are fantastic Olivers! That first one looks like a mutant Corona 4 with alligator skin. :D

Some stunning Oliversnthere Robert! Art... Every one of them.
And a sincere happy birthday to you, good sir!

Those earlier Olivers do bear more than a passing resemblance to Corona 4s and the paint jobs are just as 'enthusiastic'. Happy Birthday Robert - I hope you have a good day!

That crinkle paint Oliver is just divine!
I just received a Oliver Courier (grey keys, grey paint) this week - lovin' the case and action on it. Just about to blog!

Thanks for sharing them, and Happy belated Birthday! :)

I don't know who designed the first (roundish) Oliver. One hypothesis is that it was first built by Europa = Olympia, then sold to Oliver which had it produced by its Italian branch.
Now, Giuseppe Prezioso worked for Oliver (Italy) Ltd. The story goes he was recruited on the spot at the Milan fair by Paillard, and had a portable typewriter model ready for production - Paillard bought the model plus the engineer and came on the market with the Hermes 2000 in 1932. In addition, A. Witzemann, a Swiss typewriter mechanic published comments stemming from his own technical investigation comparing the Oliver portable and the Hermes 2000, concluding that it is very likely the latter derives from the former.

Sorry to ask - but what are the serial numbers of these machines?