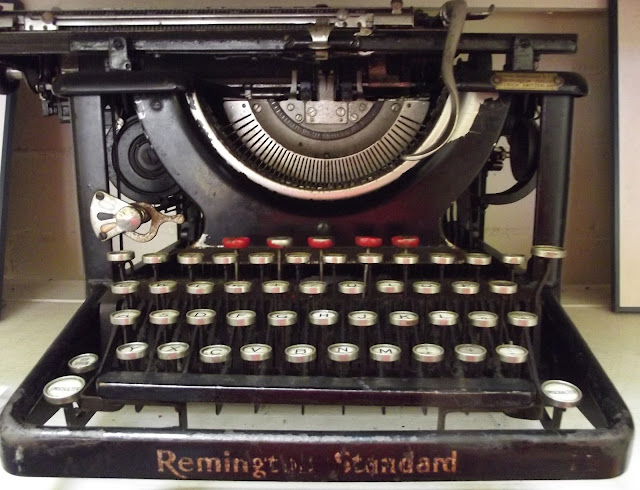 Imagine my surprise today to walk into the DP One Café at 104 Mawhera Quay beside the wharf in Greymouth to find a Remington Standard typewriter (Model 11) tucked into the back of a bookshelf. 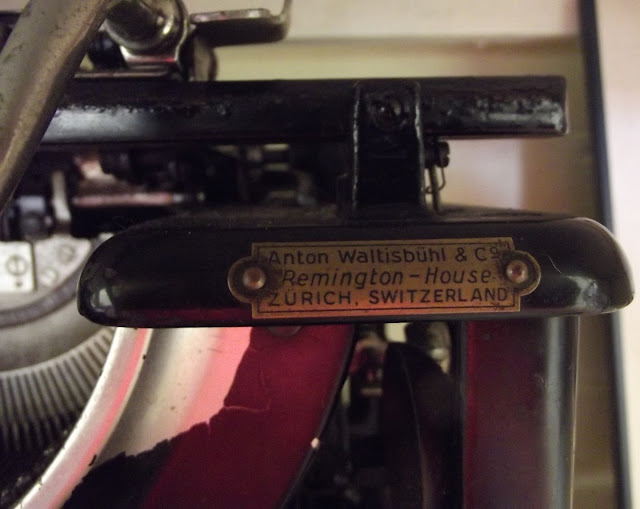 An even greater surprise was in store for me. It was one thing to find an old Remington (circa 1908) in such a town and in such a place. It was altogether another to realise that this Remington had, remarkably, made its way to Greymouth, New Zealand, all the way from Remington House, Bahnhofstrasse 46, Zürich, Switzerland.
Quite how it came to be in Greymouth we shall never know. 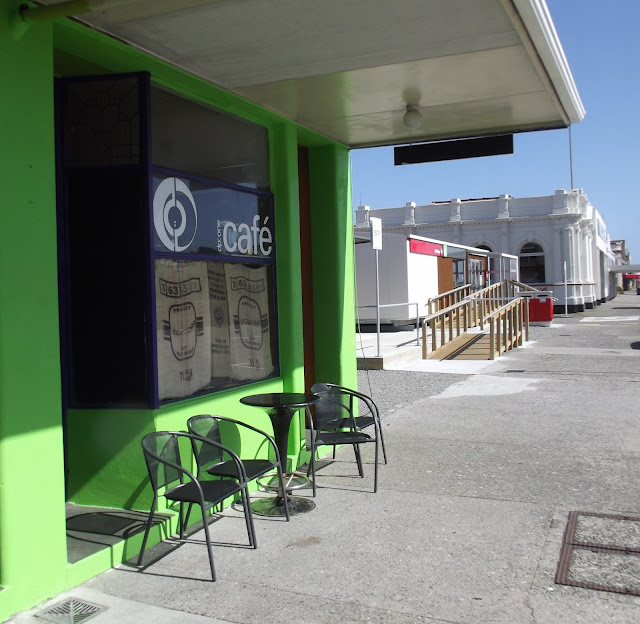 The DP One Café on Mawhera Quay in Greymouth 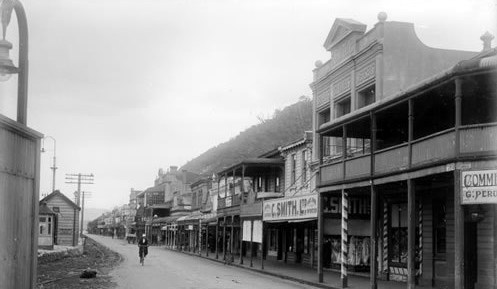 Mawhera Quay when the Remington 11 was made
For some strange reason, I’ve long felt a kind of affinity with Georg Sommeregger, so naturally I was doubly delighted to see the dealer badge “Anton Waltisbühl & Co, Remington House, Zürich”. 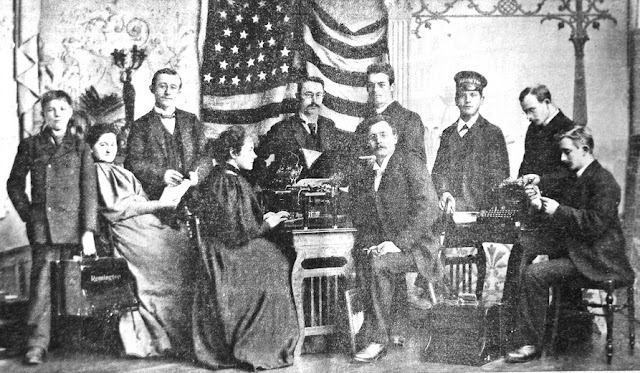 I should have been far less surprised to find that Georg knows all about Anton Waltisbühl, and even has an 1896 image of Waltisbühl (above) along with a story on one of his web pages, at typewriter.ch 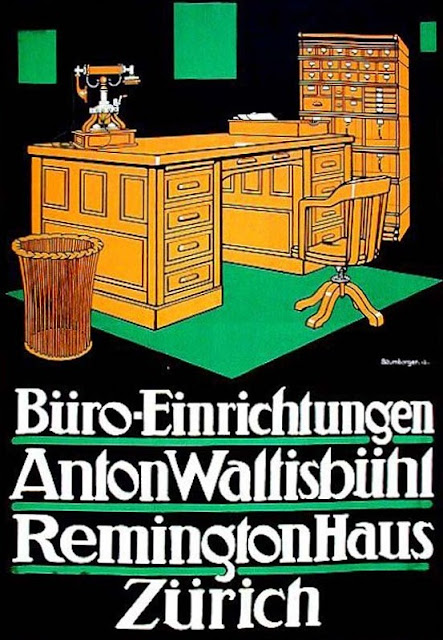 Georg’s primary interest in Waltisbühl is, as he explains, because Waltisbühl imported the first typewriter into Switzerland, in 1885. Waltisbühl was born in Bremgarten on July 3,1855, and died in Morcote on November 15,1940. He began his career as a notary in Bremgarten in Aargau. In later life he founded the World Language Association in Zürich. 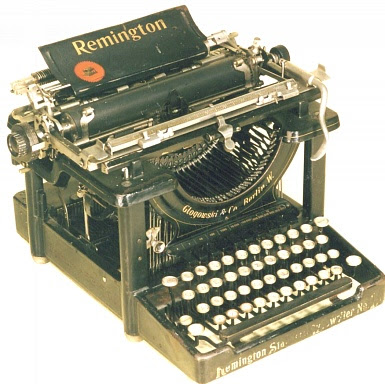 Web pages relating to “Remington Standard Typewriters - No 10 and Beyond”, put together by Will Davis and the late Tilman Elster, state of the Remington No 11: “As with previous models of Remington, numbers higher than the base machine's model (at the time) indicated an advance in option and in price.  In the case of the No 11 Remington, a decimal tabulator was fitted with 10 different stop positions.” 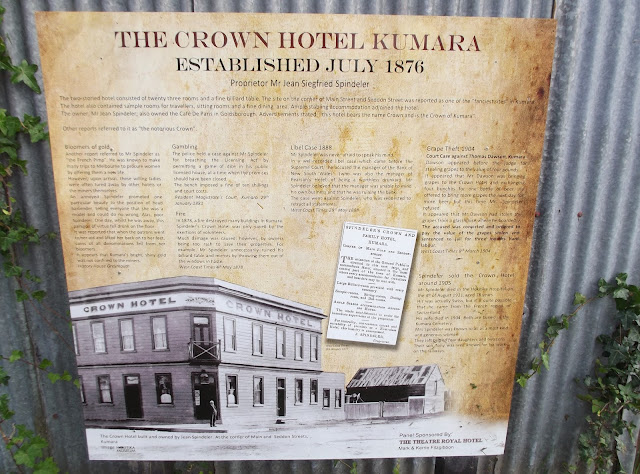 I thought of Georg again, later the same day, when I visited the hamlet of Kumara, 14 miles south of Greymouth. Once a city, at the height of the West Coast goldrush, Kumara is now near to being a ghost town. But stories of its golden days are being kept alive, and are told in boards posted along the main street.
One such related to an outspoken and successful hotelier, Jean Siegfried Spindeler, who was born in Switzerland in 1843. He died in Kumara on August 3, 1921. 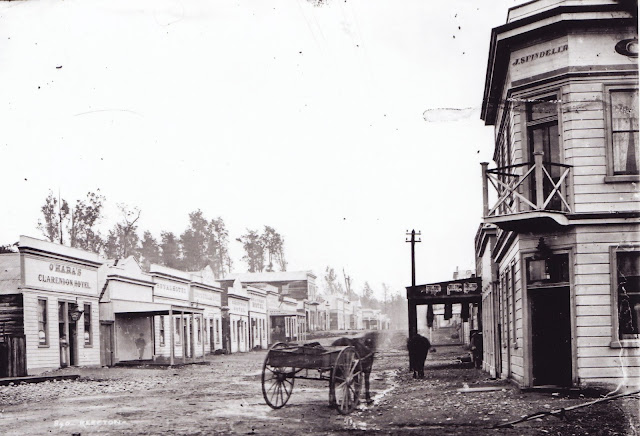 Spindeler's Crown Hotel, right, stood on the corner of streets once packed with pubs and business houses. None now still exist. Below, Spindeler outside his hotel: 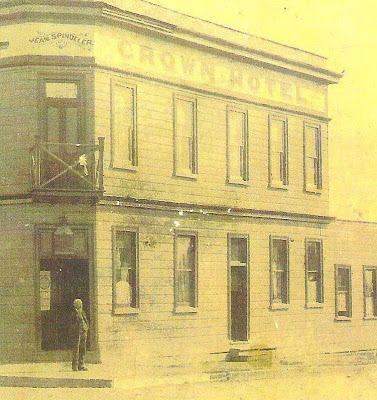 Kumara’s first mayor, by the way, was New Zealand’s “King Dick”, Lancashire-born Sir Richard John Seddon. It was under Seddon’s long premiership of the new nation that New Zealand introduced to the world such enlightened things as a social welfare system which included old age pensions, and women’s suffrage. "King Dick" Seddon of Kumara
Switzerland was also on my mind when I sought out the place where in March 1966 I bought my first typewriter, an Olivetti Lettera 32 portable, at Jim McNulty’s Typewriter Shop on Albert Street in Greymouth. McNulty’s shop is now a Vinnie’s store, so of course I thought of Adwoa Bagalini and Richard Polt declaring St Vincent de Paul “the patron saint of typewriters”. With that in mind, it just seemed so right to me that in place of  the long-gone McNulty's was a Vinnie's. 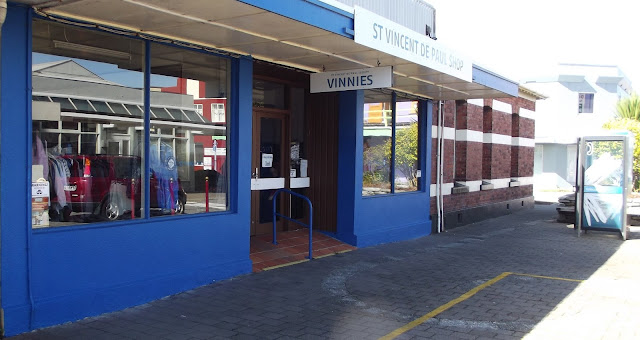 Apart from the old Remington in the DP One Café, and my own Groma Kolibri, I saw no other typewriters in Greymouth. My heart skipped a beat, however, when I passed under this shop sign:

Posted by Robert Messenger at 22:01

So, did you check the Vinnies for any machines?

Greetings from Zurich to Down Under! Anton

I llove internet!!
Hello!
I was searching around about a little table/bureau my Grandma left me. She loved it. Maybe she got it from her mother, not sure anymore.. And so here and there am I, discovering Mr Anton W! A part of my country’s history. Cool! And many typewriters, but not so much furnitures. Until... Here it is!!
The little tables, kinda lyra shaped, pictured with Waltisbühl and his audience. I have one the same in my living room!
I thought this man and his house engineered furnitures, before searching. Very interesting! I love typewriters. Spent lots of good moments on my father’s one since able to write ten words. Better than toys! The words, the fact of putting words into reality, the mecanic, the feeling the sound. And the taped tipex..... So cool!!
Presently I am „typing” on flat glass...

Do you know where I could find other pictures of furnitures by this house? Or any information about the furnitures? Except one or two pictured or drawn in adverts, I do find nothing. Not one single photography, except yours. So much without interest, the wood part? I find it beautiful! Mine is pretty kawaï!
I don’t have children and my nephew is what he is.
If you’d love to take care of it one day.. I won’t be very more long.
Give me a sign. Or anybody loving. Knowing, caring. Give a sign ;)

Thank you for the share of you, nice site!
Sincerly,
M, Switzerland