Goodies and Such Good People: The Wonderful Wide World of Typewriters 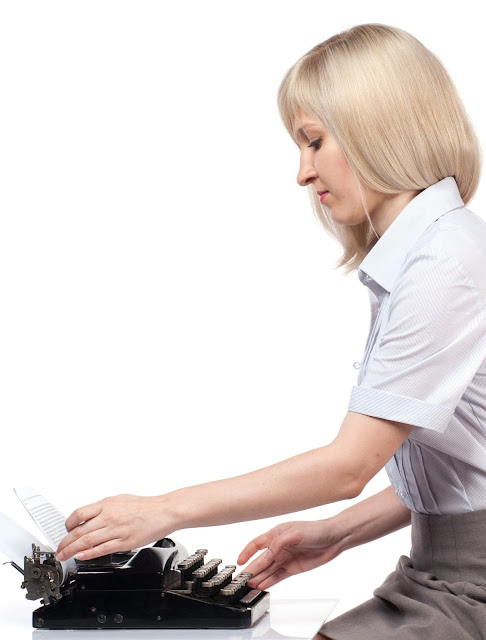 My secretary, Phonetica Longley, seen here typing on my "go-to" Bijou, is getting sooooo utterly sick and tired of me not answering my correspondence, she's threatening to walk out (and take the Bijou with her). So I thought I should at least acknowledge some of the mountains of mail (and gifts) I've received these past few months.
I find it hard enough to keep up with electronic mail (in fact I fail miserably), let alone real mail, but my intentions are as good as those marvellous friends who send me things. I promise I'll get around to replying one day ... soon ...
But when, as happened the night before last, I get almost 2000 page views in a single 24-hour period, I just feel locked into this blog - I have become its slave, compelled to keep posting. Which means my mail suffers - as you will see. 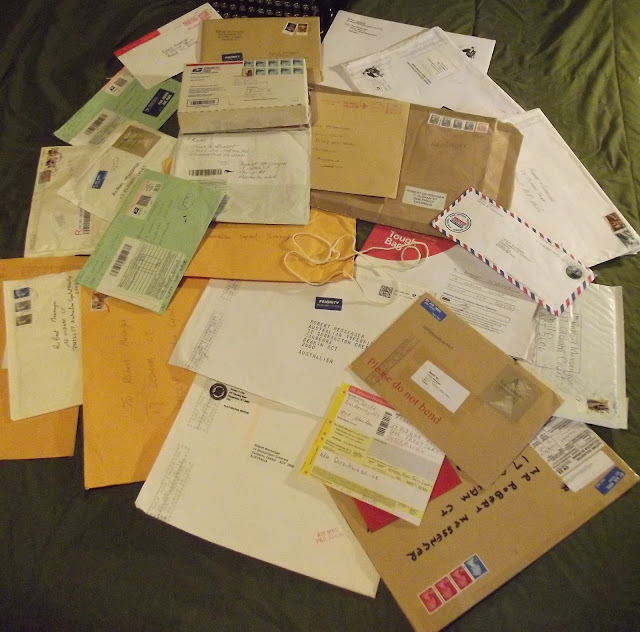 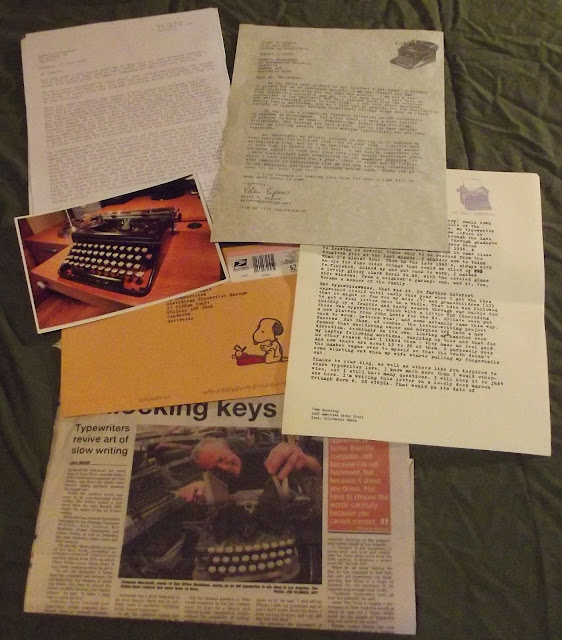 These fabulous letters came from new dad Ray Nickson, in Adelaide, and Typospherians Tony Mindling, in Cool, California, and Peter Eipers, in Helena, Alabama. Tony and Peter use such fantastic typewriter-headed writing paper - and Tony's envelope features my all-time favourite typist. Tony also sent a photo of his lovely burgundy Triumph portable. Lots of people alerted me to the Ermanno Marzorati story, but only one sent me a newspaper clipping: Gary McGill on the Gold Coast. 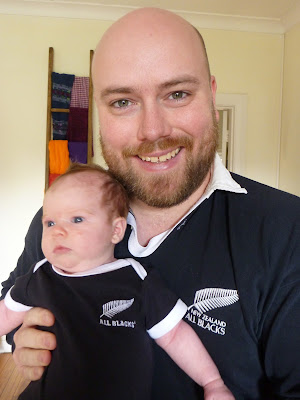 Mention of typewriter collector Ray Nickson (seen here with new All Blacks fan, his daughter Cynthia Sue, born on July 22) brings me to one of the most useful gifts I've received in a long time. Ray made me a typewriter toolbox! Unfortunately, it was quickly filled up with typewriter spare parts which had been lying around the place, instead of tools. It may not compare with Richard Polt's typewriter parts drawers, but it's still a pretty handy piece of work: 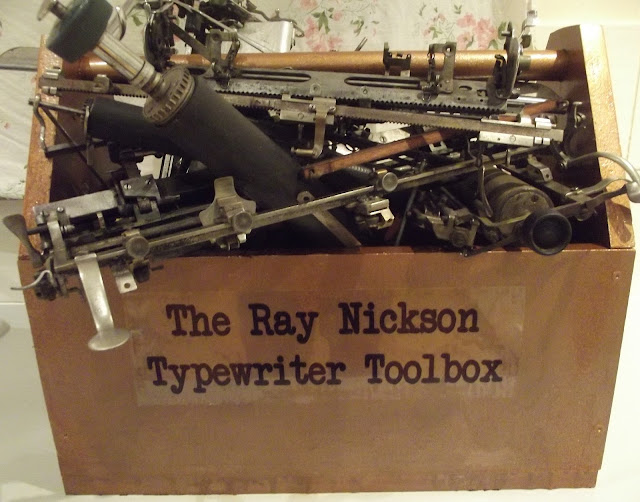 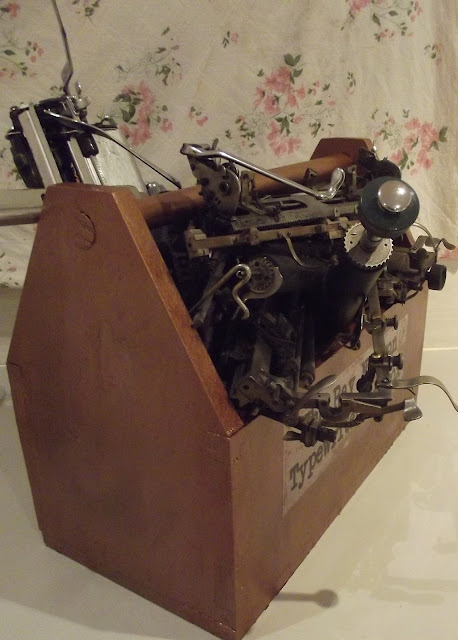 Ray's lovely American-born wife Alice, while waiting for Cynthia to arrive, very kindly made me oven gloves made from material with typewriter patterns. They're among this little lot, along with my sets of Typosphere postcards and a nice note from Rob Bowker, plus a DVD I haven't even had a chance to watch yet: 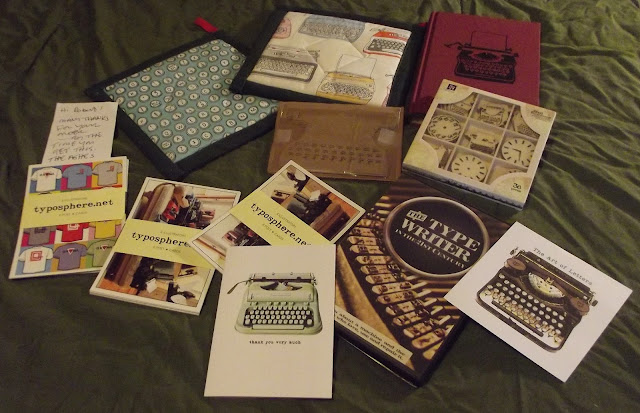 Alice's use of the typewriter material inspired me to get a few square metres of it myself and get some more typewriter ties made up. Of the seven ties here, the only ones I didn't get made myself are the two silky ones in the bottom photo. A couple of Typospherians commented favourably on me wearing one at the Ionian Club presentation last week: 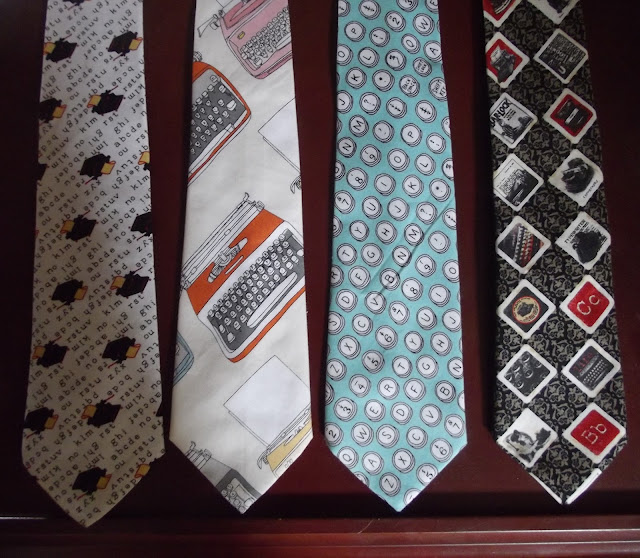 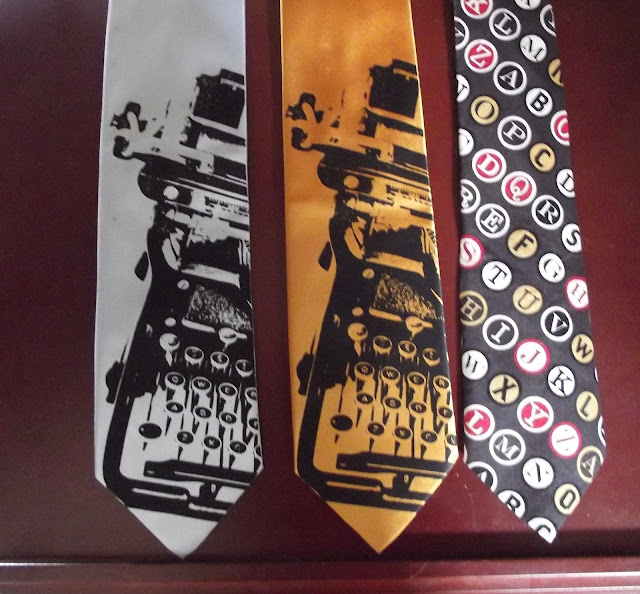 Someone else had a similar idea, except this time for cushion covers: 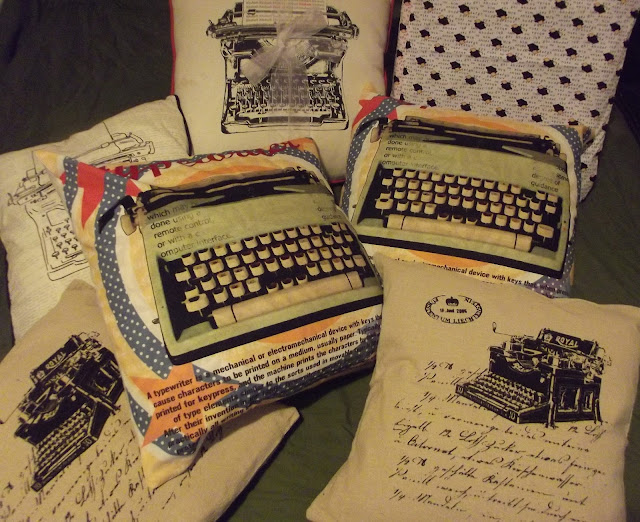 Richard Amery in Sydney was also kind enough to send me some samples of the typewriter ribbons he is importing from China and selling on eBay: 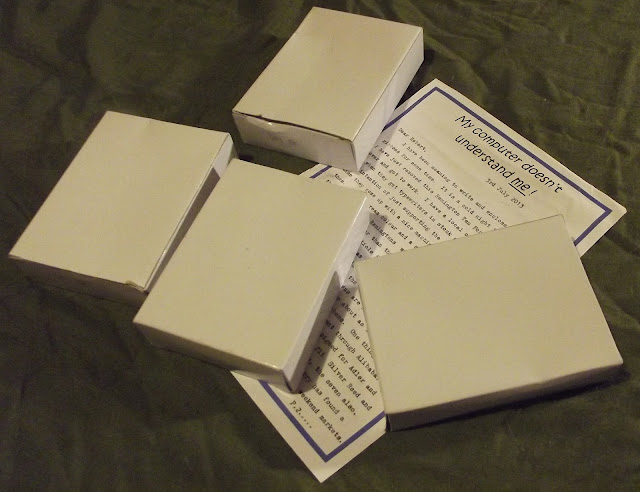 Peter Muckermann in Germany keeps me well supplied with typewriter reading material (as does Herman Price in West Virginia) and Georg Sommeregger in Switzerland sent me a wonderful Swiss typewriter magazine, to which Georg had contributed a feature on Otto Petermann (see front cover with "Hermes" on it): 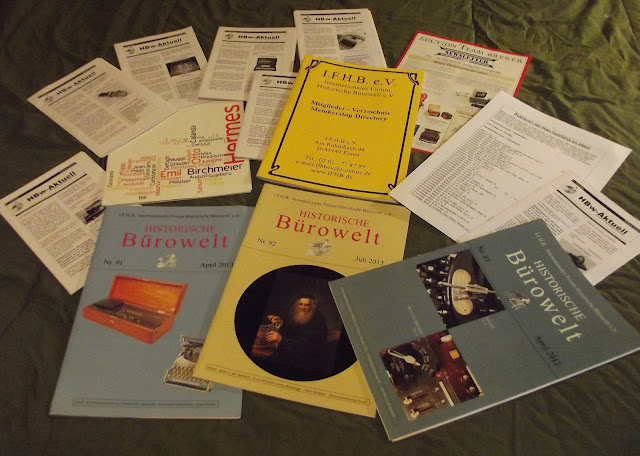 I was thrilled to receive from Louise Marlar (www.lamarler.com) the first of her "Talk QWERTY to me" T-shirts (a line Richard Polt first alerted me to), plus the "You are my type" shirt. They're still a bit crumbled from being squeezed into their package, but a warm iron will soon fix that. It's been too cold for T-shirts in Canberra these past three months, but I'm sure to get some wear out of these in the very near future: 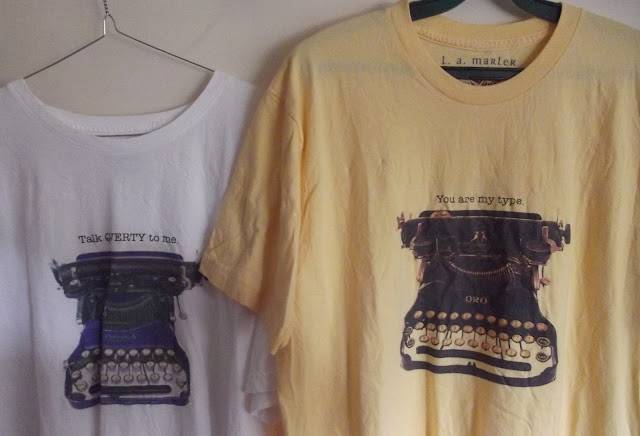 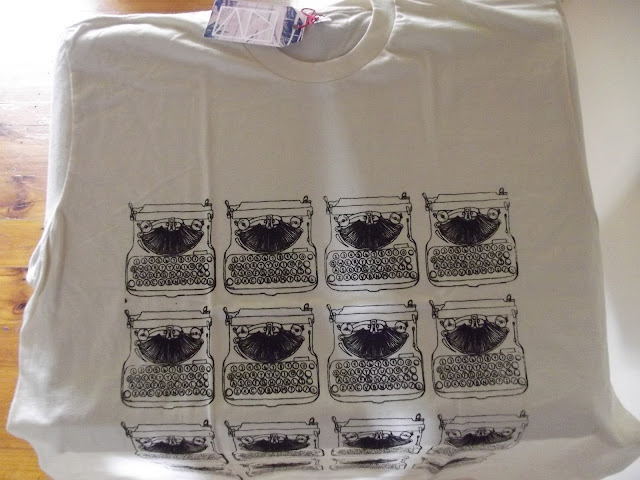 This cardboard IBM Selectric turned up from the US. It was created in 2006 to send to Emmy Award judges and includes inside it a DVD of the nominated Hunter S.Thompson documentary Buy the Ticket, Take the Ride: 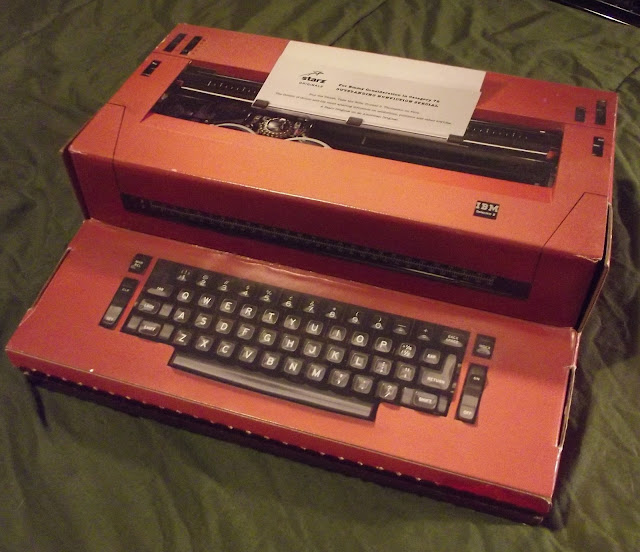 Call me a sucker for any typewriter-related item on Etsy if you will, but I have no absolutely qualms about wearing my love of typewriters on my sleeve - or, in these cases, on my chest: 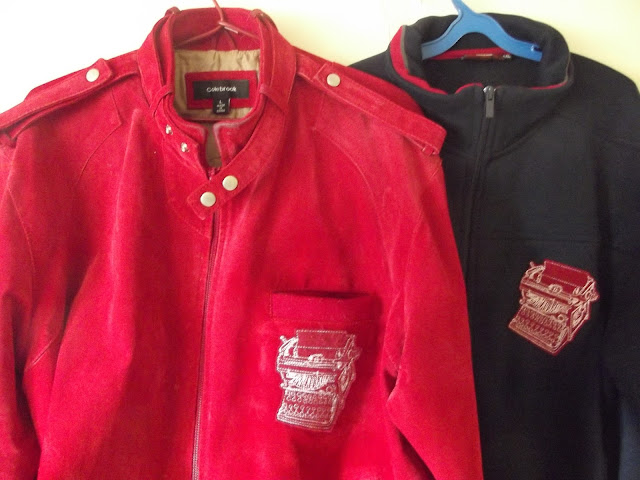 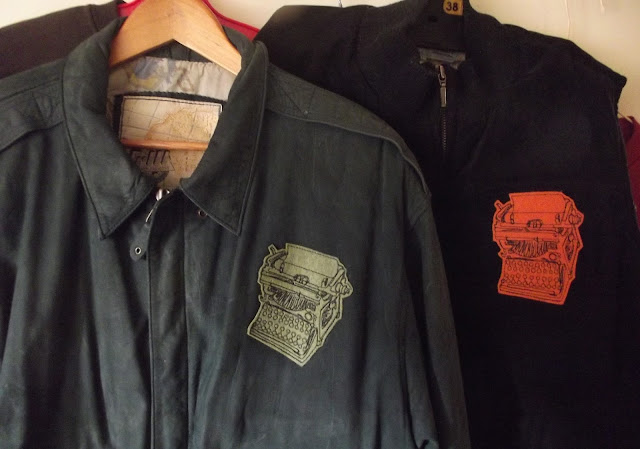 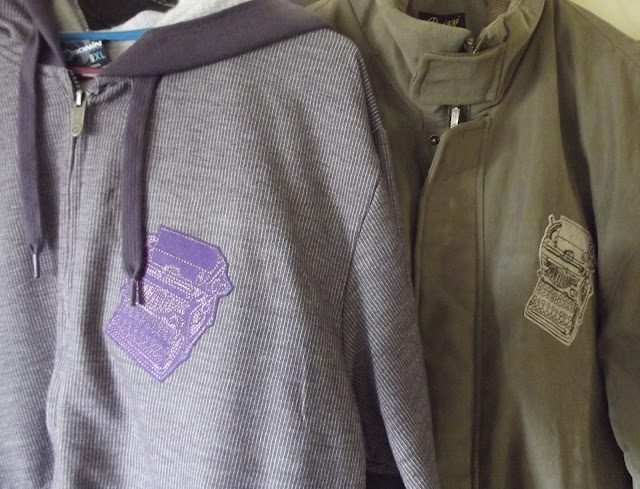 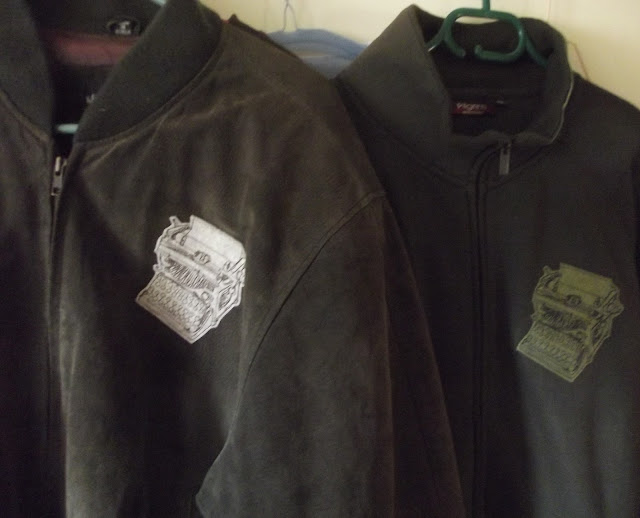 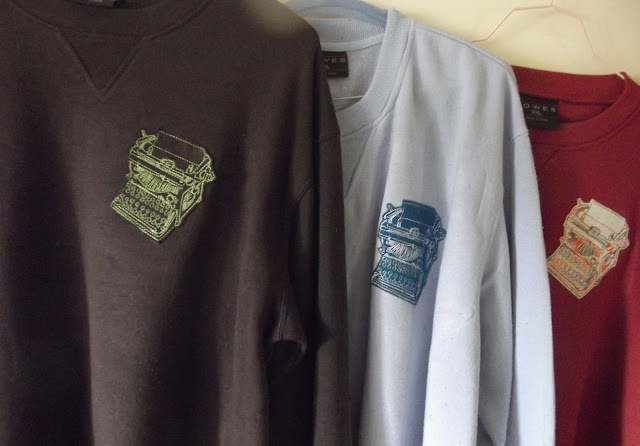 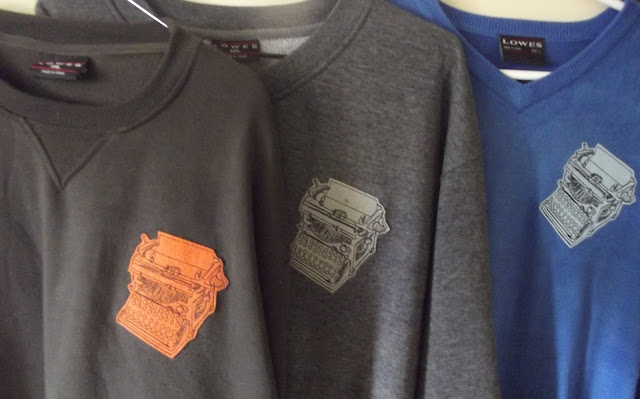 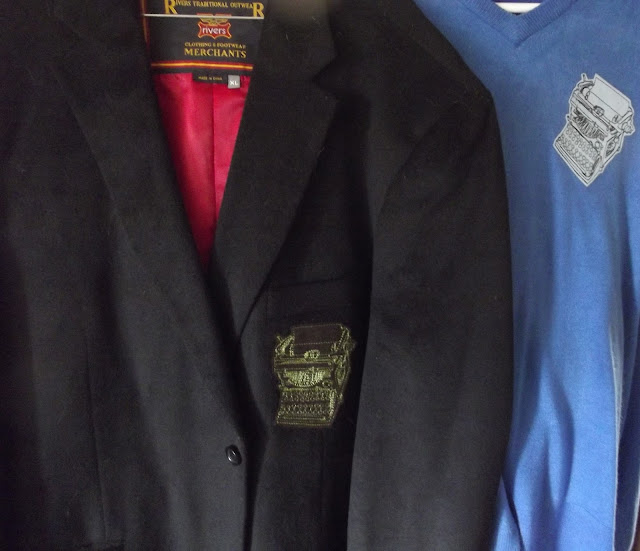 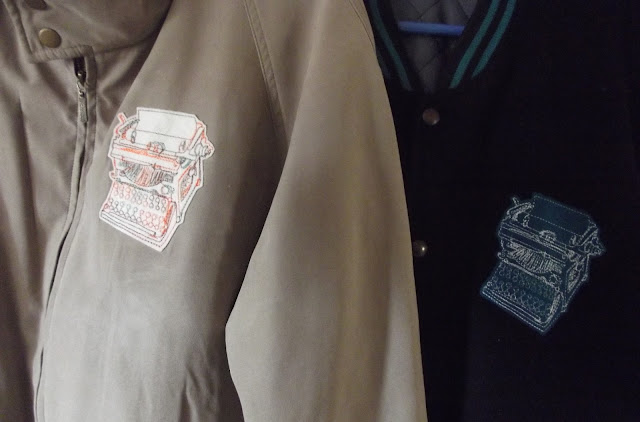 And that's just the tip of the iceberg! (Most deliveries contain actual typewriters!)

This post is great fun, especially to see the recognizable letterheads of a couple of other typospherians I correspond with. But if you think this post is going to let you off the hook of responding to all of us, better think again. I'm still looking forward to seeing an envelope with Australian stamps on it down there in the blue mailbox someday! ;)

*whew*
I'm just glad to see the address I pulled off an old ETCetera mailing list is still in use.

Robert, you are in Typewriter Paradise, and one of these days I will board a plane to Australia and come see you. In the meantime, thank you so much for your extensive an always surprising blog entries.

You got all of this in the mail? Wow! There is some very impressive stuff. Enjoy unpacking the rest of it.

After some difficulty scrolling past the photogenic Phonetica Longley, I have to say that's quite a lot of treasure. I must find some material for ties, unless you feel like selling some off to us.

Wow, you have got some STUFF.

Surely you're on first name basis with your postie and you must be on their Christmas card list!
Anyway, I'm far too enthralled with the blog to ever notice any lack of email communication.