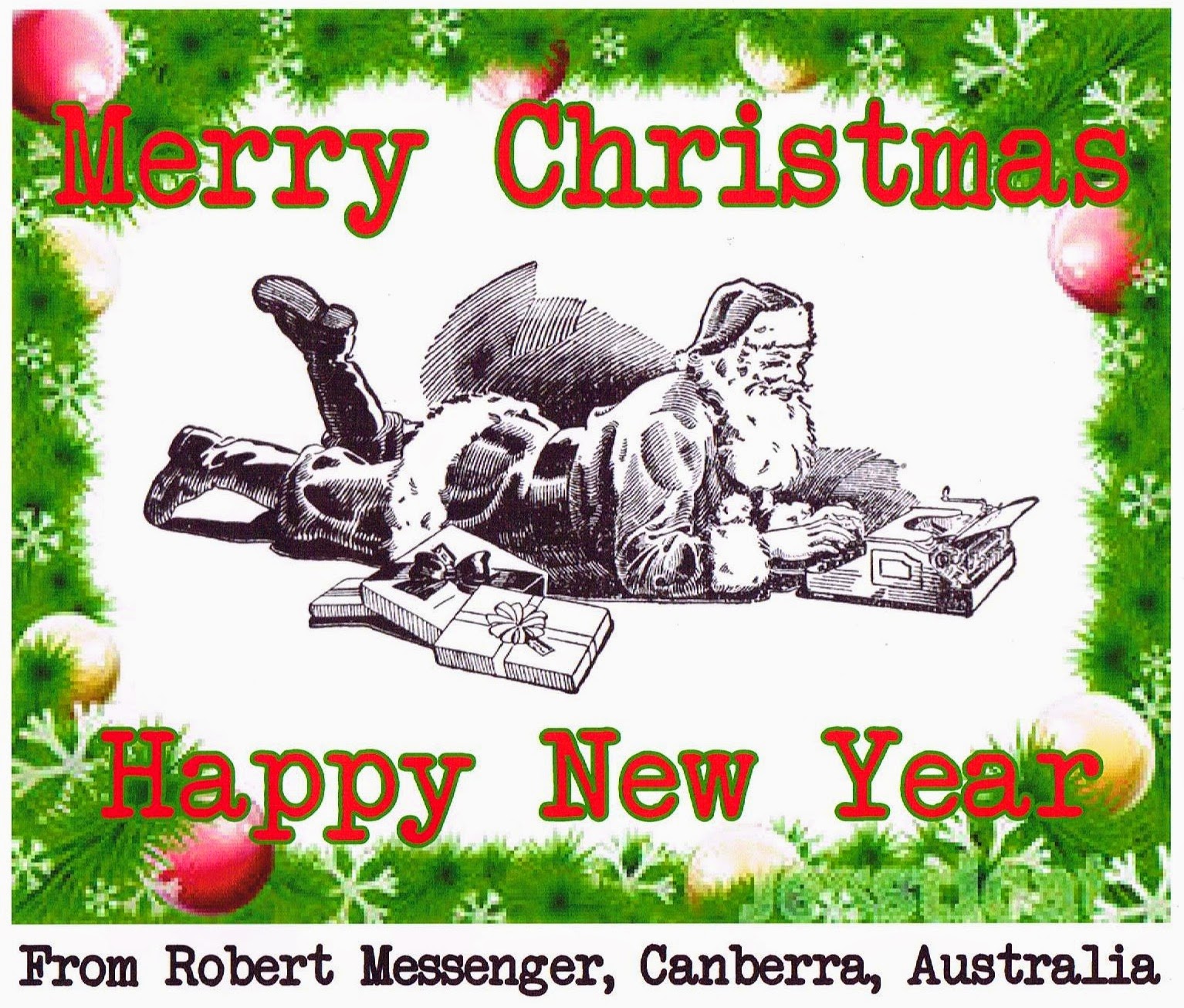 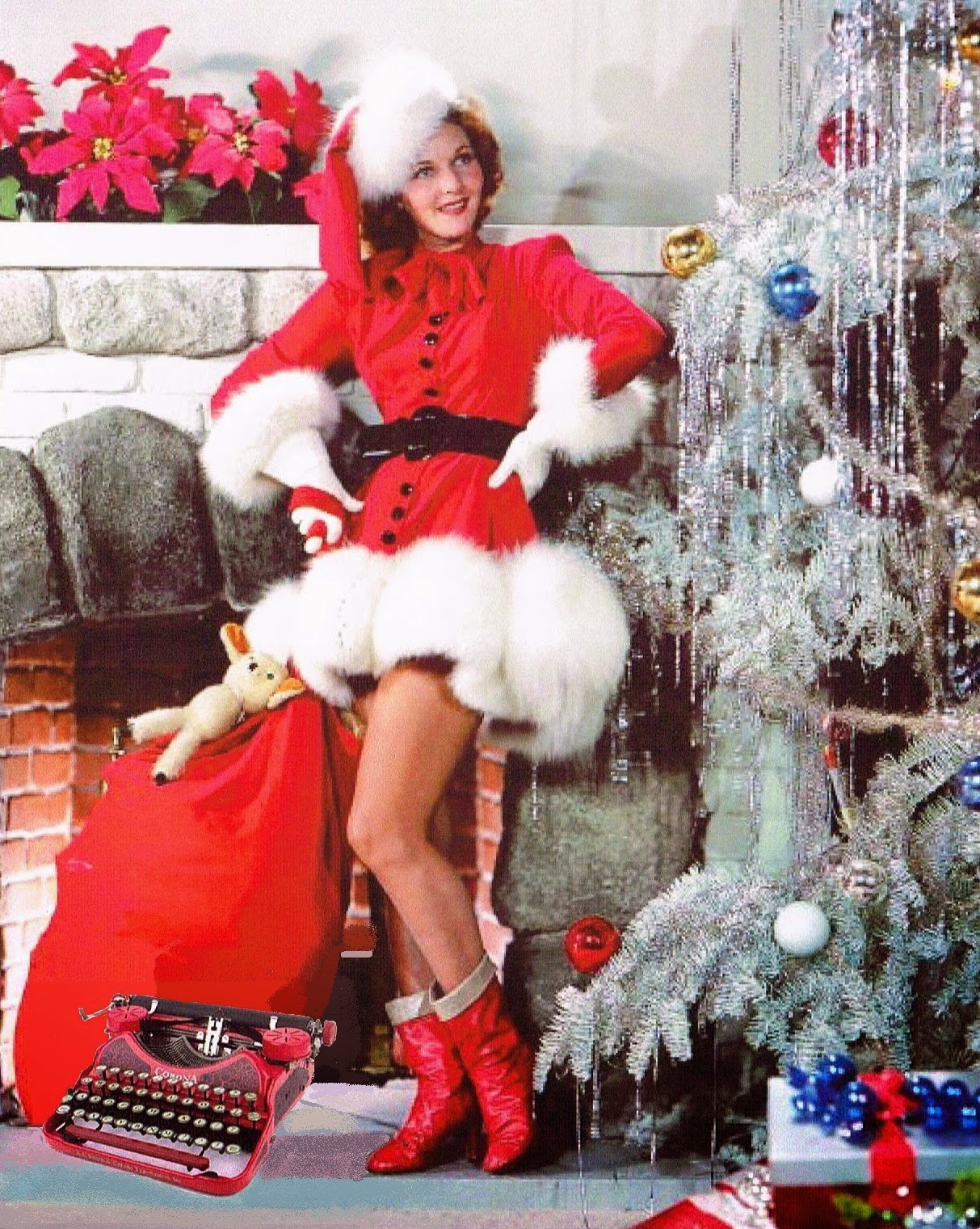 Piotr, the Prince of Lightness 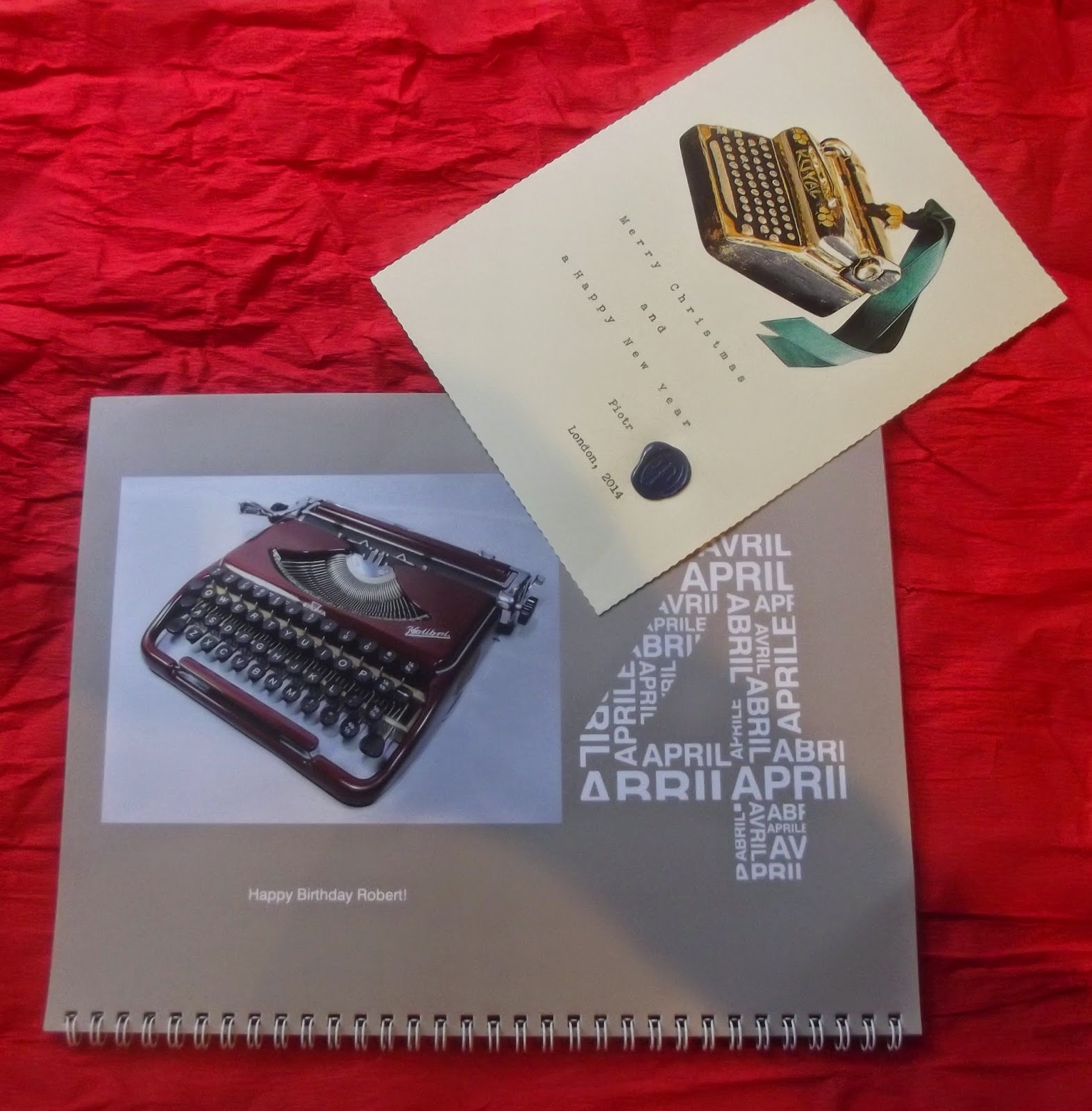 What a wonderful Christmas gift from Piotr Trumpiel in London - a calendar comprising 12 pages of images of Piotr's impressive collection of Groma Kolibris! The calendar celebrates the 60th anniversary of the Kolibri in 2015. In it, the month of April is devoted to the burgundy Kolibri I sent Piotr a short while ago. Piotr has even included best wishes for my 67th birthday on that page! Plus there was a really beautiful typewriter-themed card with the parcel. You are a prince and an artist, Piotr. Not to mention a gentleman and a scholar. I'm lost for words in gratitude. You've gone even one more step up in my estimation ... 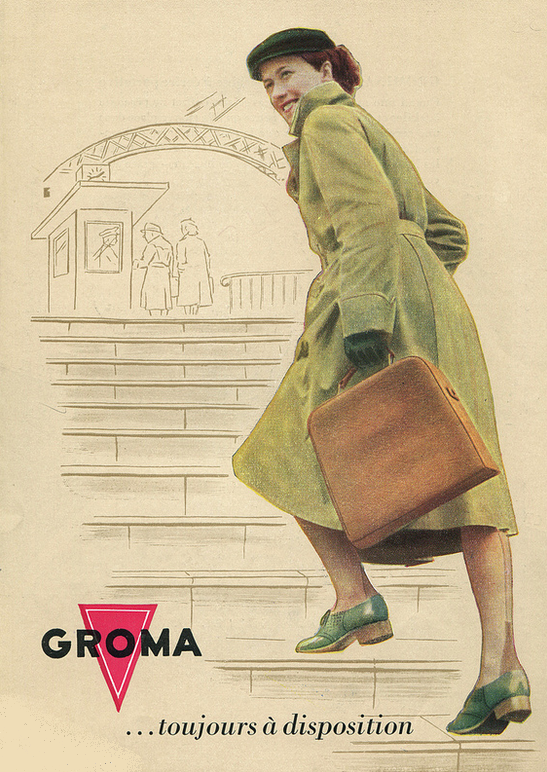 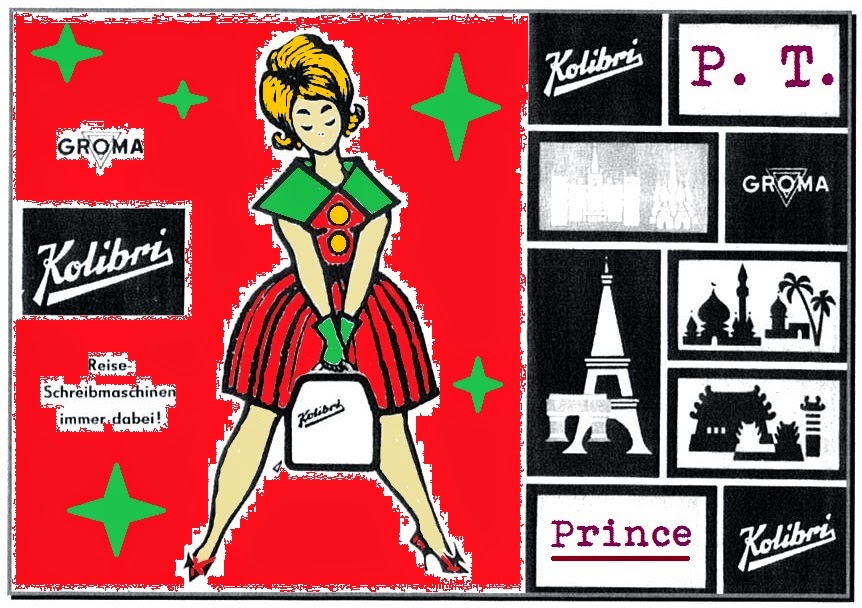 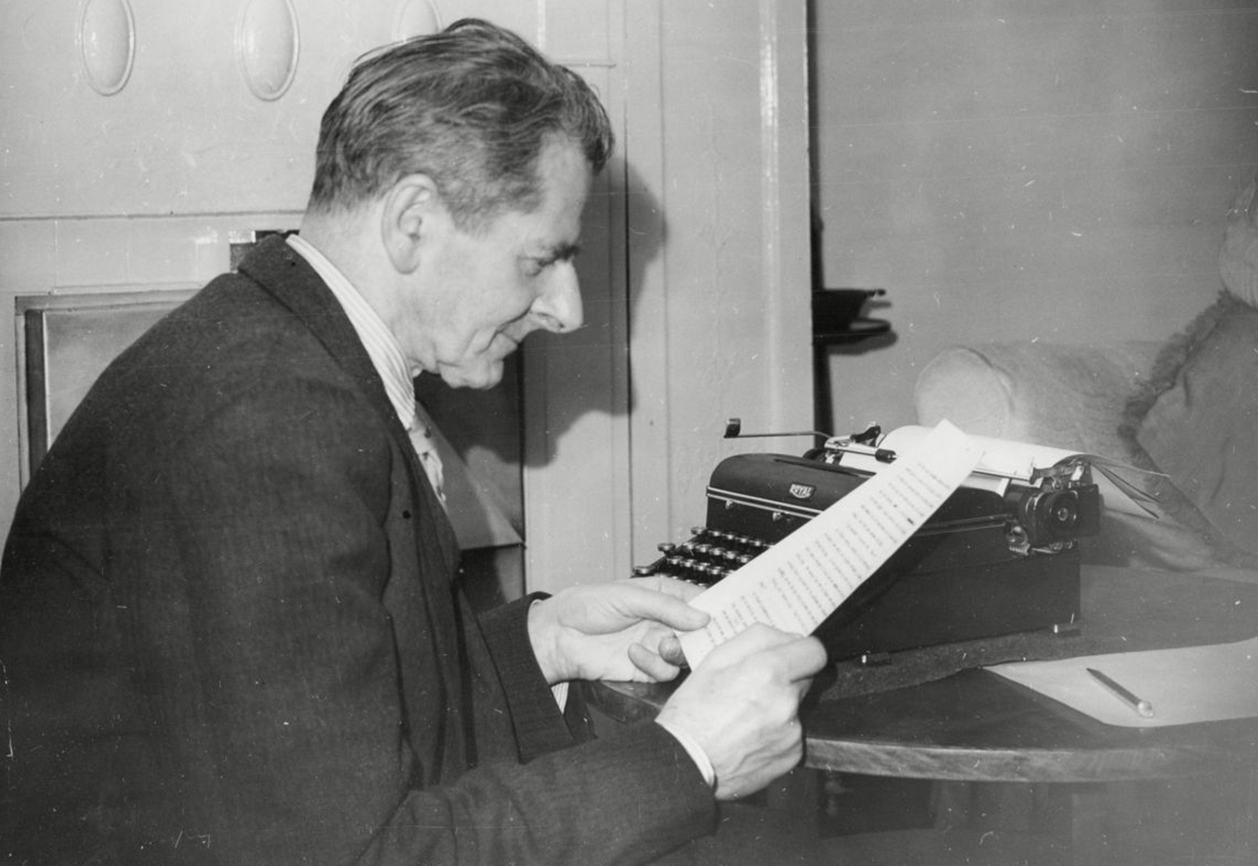 J. Jefferson Farjeon - suddenly flavour of the month in England
Five months ago I posted on prolific author Benjamin Leopold Farjeon (1838-1903), describing him as the "first writer-journalist to master the typewriter". Farjeon arrived on the Victorian goldfields aged 16 and seven years later, in 1861, he headed for New Zealand to continue his newspaper career, notably on that country's first daily, The Otago Daily Times. Farjeon returned to England in December 1867, setting himself up in the Adelphi Theatre and from 1876 hammering away mercilessly at a Sholes & Glidden.
In June 1877, Farjeon married Margaret Jane "Maggie" Jefferson, daughter of American actor Joseph Jefferson, and the couple had four children, all of whom enjoyed considerable success in the arts.
One them was another prolific writer and journalist Joseph Jefferson Farjeon (1883-1955).
Lo and behold, at Christmas 2014, the typewriter-wielding J. Jefferson Farjeon has suddenly become flavour of the month in literary circles in England. Normandy-based journalist Christopher Long alerted me to this article in the London newspaper The Independent: 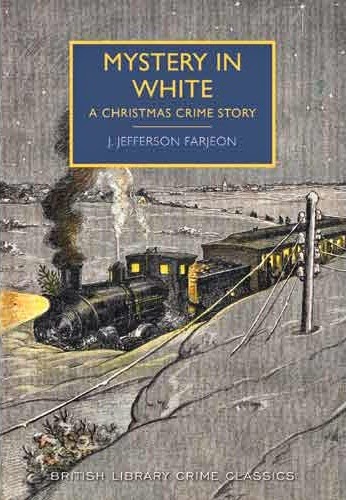 Thirties murder mystery novel
is surprise runaway Christmas hit
Booksellers say readers are turning away
from dark modern thrillers and
back to the golden age of crime writing
By Paul Gallagher
A Christmas detective tale not seen in shops for more than 70 years has become a festive sleeper hit and resurrected interest in a long-forgotten crime writer. Mystery in White: A Christmas Crime Story by J. Jefferson Farjeon is selling in "astonishing numbers", according to the Waterstones book chain.﻿ It has outsold rival paperbacks Gone Girl, by Gillian Flynn, and Donna Tartt's The Goldfinch on the high street, while Amazon temporarily ran out of stock last week due to surging demand.
First published in 1937, Mystery in White has been republished as part of the British Library Crime Classics series that is rekindling interest in authors from the pre-Second World War "golden age" of crime writing. More than 155,000 copies in the series have been sold this year, with Mystery in White accounting for 60,000 of those sales.
Another one hooked 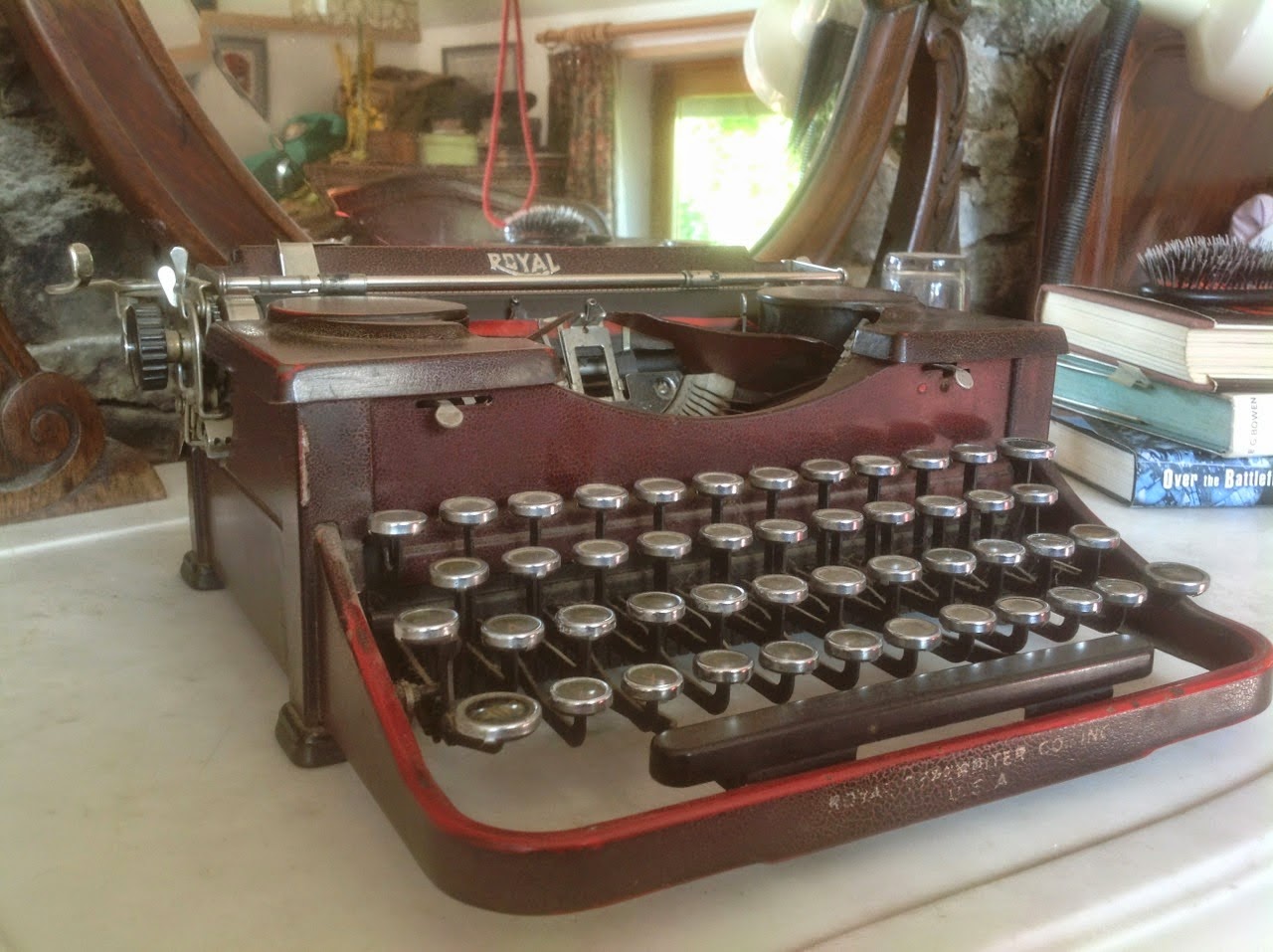 Christopher Long's Royal, once owned by his grandfather
Mention of Christopher Long reminds me that I did warn him earlier in the year about the dangers of getting hooked on typewriter collecting, no matter how innocently - and with every good intention of keeping the collection small - it all starts out. In his email pointing me to the Farjeon story, Christopher fessed up that his collection has grown from a 1965 Olympia Splendid 66 and his grandfather’s 1931 Royal portable to include a 1917 Corona 3, a 1936 Royal portable, a 1937 Imperial Good Companion in mint condition, a 1953 Royal HH Elite, a 1961 Imperial 66, another Olympia Splendid 99, a 1958 Olympia SM3 De Luxe and a 1968 Olympia Splendid 66.
He's now after a Hermes 3000.
Here we go again 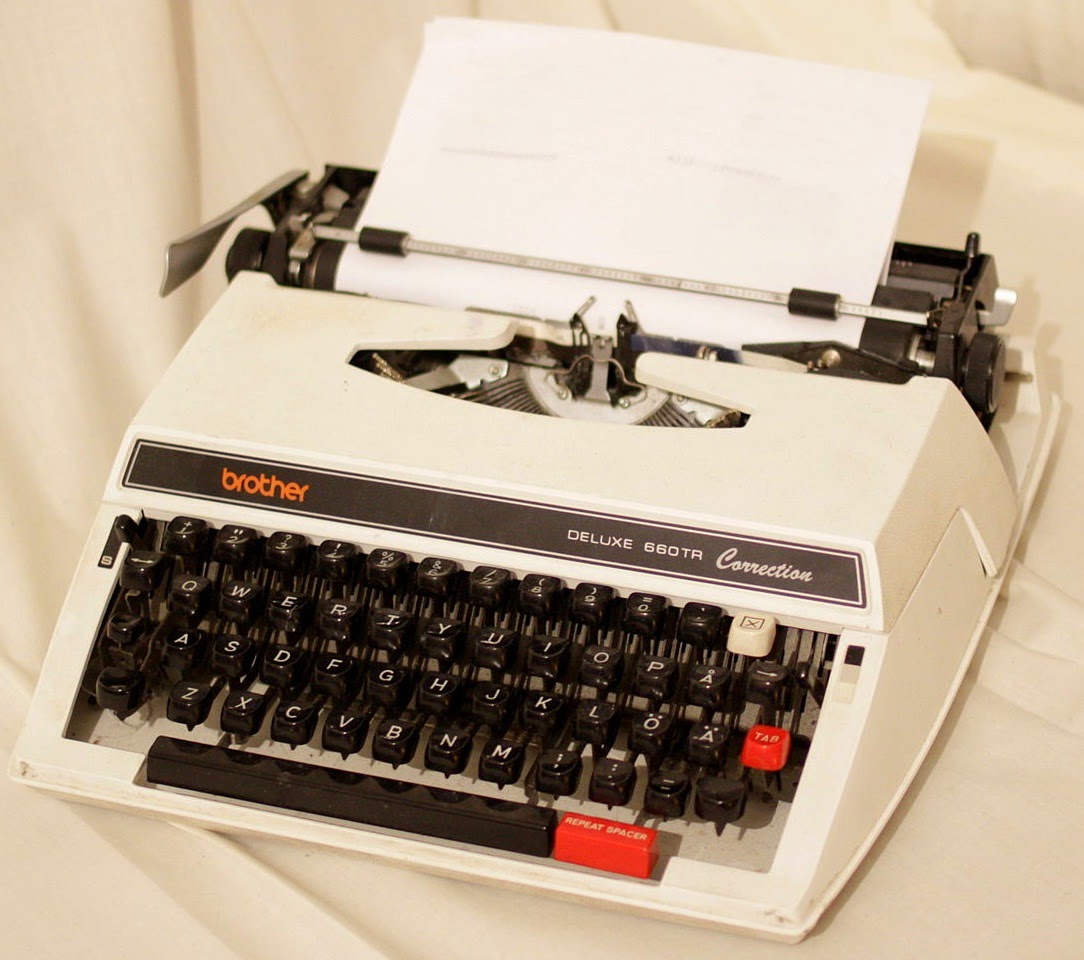 Try hacking into this, Pyongyang
Brace yourselves. Every time there is one of those internet security scare stories, there is going to be an associated story about typewriters coming back into demand. Since we can confidently expect that internet security scare stories will escalate in the coming weeks, months and years, that means there are going to be "typewriters are on the way back" stories by the hundred, possibly by the thousand.
The latest one, of course, is linked to North Korea hacking Sony Corp. Global News quickly reported, "It’s back to 1992 for employees of Sony Pictures in the wake of the cyber-attack that resulted in private emails being released.
"Whether Sony will start making typewriters is yet to be seen – but this latest hacking scandal has clearly got people talking – or should we say typing - the old fashioned way."

'What the hell is a typewriter?' 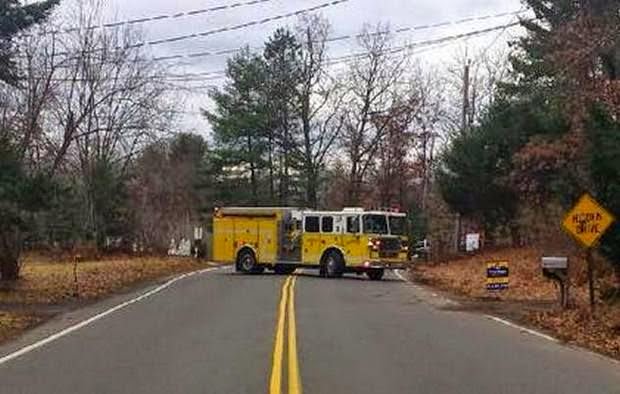 A Hadley fire truck blocks Rocky Hill Road after a report of a suspicious package.
There was a bit of excitement in Hadley (population 5250 souls) in Hampshire County, Massachusetts, when someone found - wait for it - a typewriter!
"Rocky Hill Road was closed to traffic for an hour as police investigated a suspicious suitcase found on a doorstep. The state police bomb squad took an X-ray of the suitcase and quickly determined it was a typewriter, said Hadley police officer Mitch Kuc. Hadley police and firefighters responded to the scene. Kuc said a resident called police after finding the suitcase on a front door step and had no idea how it got there. A neighbour reported seeing an unknown person leaving it on the step but did not know what it was. Kuc said he does not know what happened to the typewriter after that. Asked if it was a new or older model of typewriter, Kuc replied he did not know, adding "Aren't all typewriters old?" As one of the comments on the Hadley Police Facebook page noted, "No wonder it was suspicious! What the hell is a typewriter?" 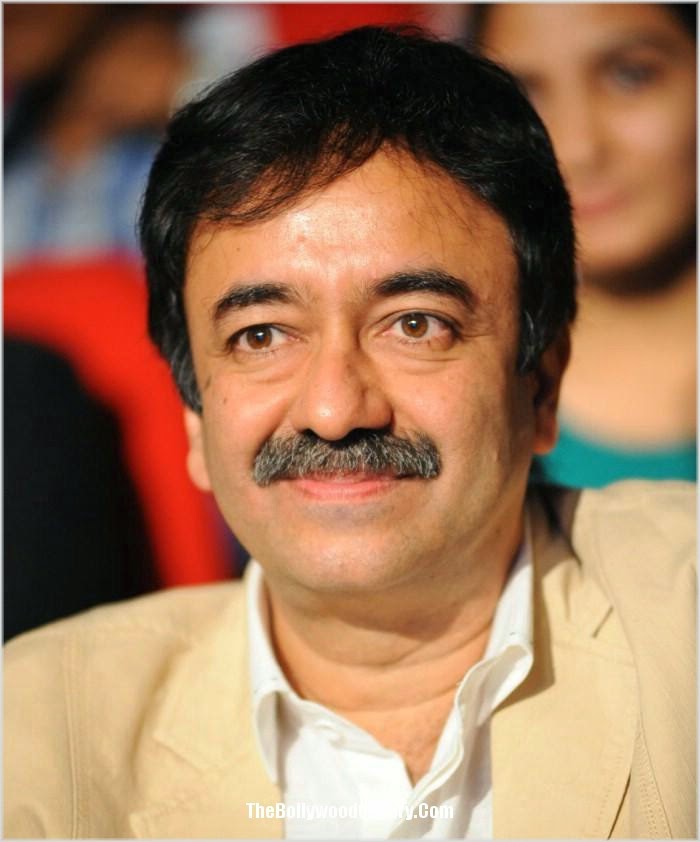 Rajkumar Hirani, an Indian director, screenwriter and film editor of Hindi films, received a typewriter for his 52nd birthday. The "special gift" came from one of his fans in North India. "Old models are difficult to find today," Indian media reported. Hirani was said to be touched by the gesture. "It reminded him of his old days when he used a typewriter. The ace director has been extremely busy with his next release but felt, despite having a working birthday, this thoughtful gift made his day."
We know of another very special person who received a typewriter for his birthday, but in his case it was a cake. No names, no pack drill: 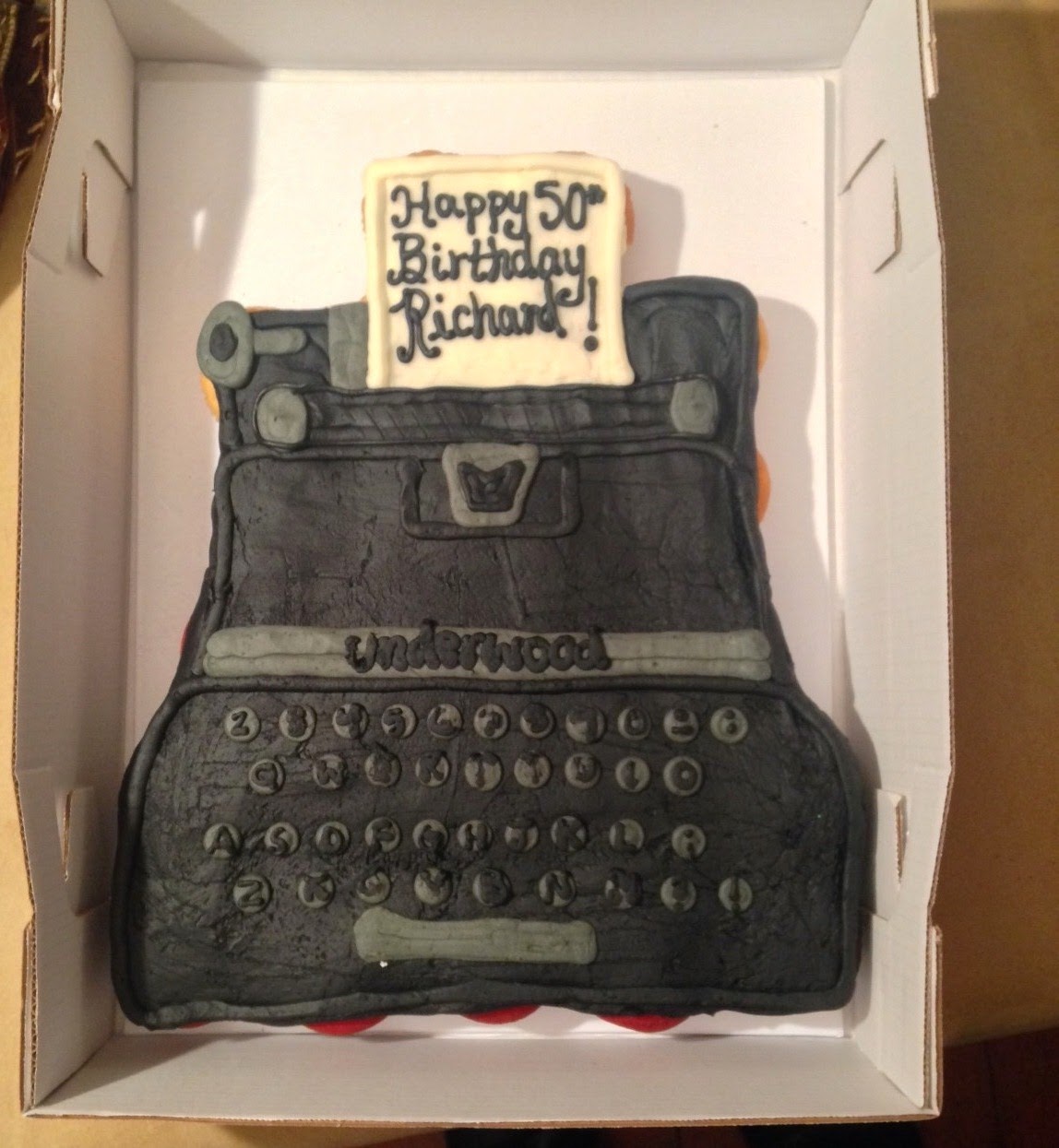 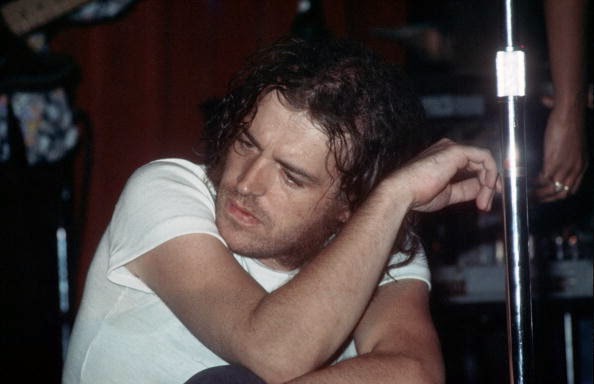 I have no idea whether Joe Cocker ever used a typewriter - somehow I doubt it. Still, it was sad to hear Cocker died of lung cancer yesterday at his home, the Mad Dog Ranch in Crawford, Colorado, aged 70. I was always a big Cocker fan, and many were the times I banged away at a typewriter to the tune of Cocker Happy, one of my all-time favourite albums: 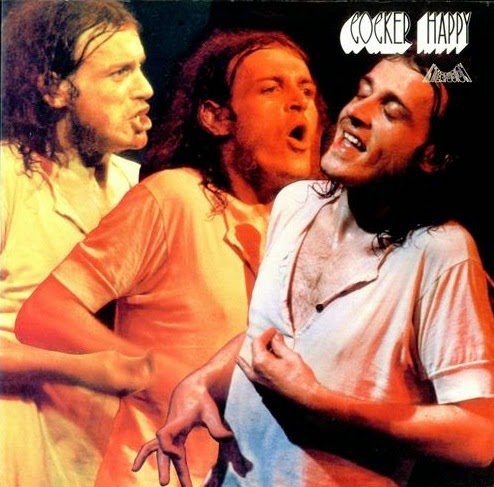 I covered Cocker's explusion from Australia in October 1972. The way he was treated back then was one of the reasons I was glad to be leaving the country myself the following month. Cocker and six members of his tour entourage were arrested in Adelaide by police for possession of marijuana. The next day in Melbourne, assault charges were laid after a brawl at the Commodore Chateau Hotel, and Cocker was given 48 hours to leave the country by the Australian Federal Police. This caused huge public outcry in Australia and sparked hefty debate about the use and legalisation of marijuana. It also gained Cocker the nickname of "the Mad Dog". 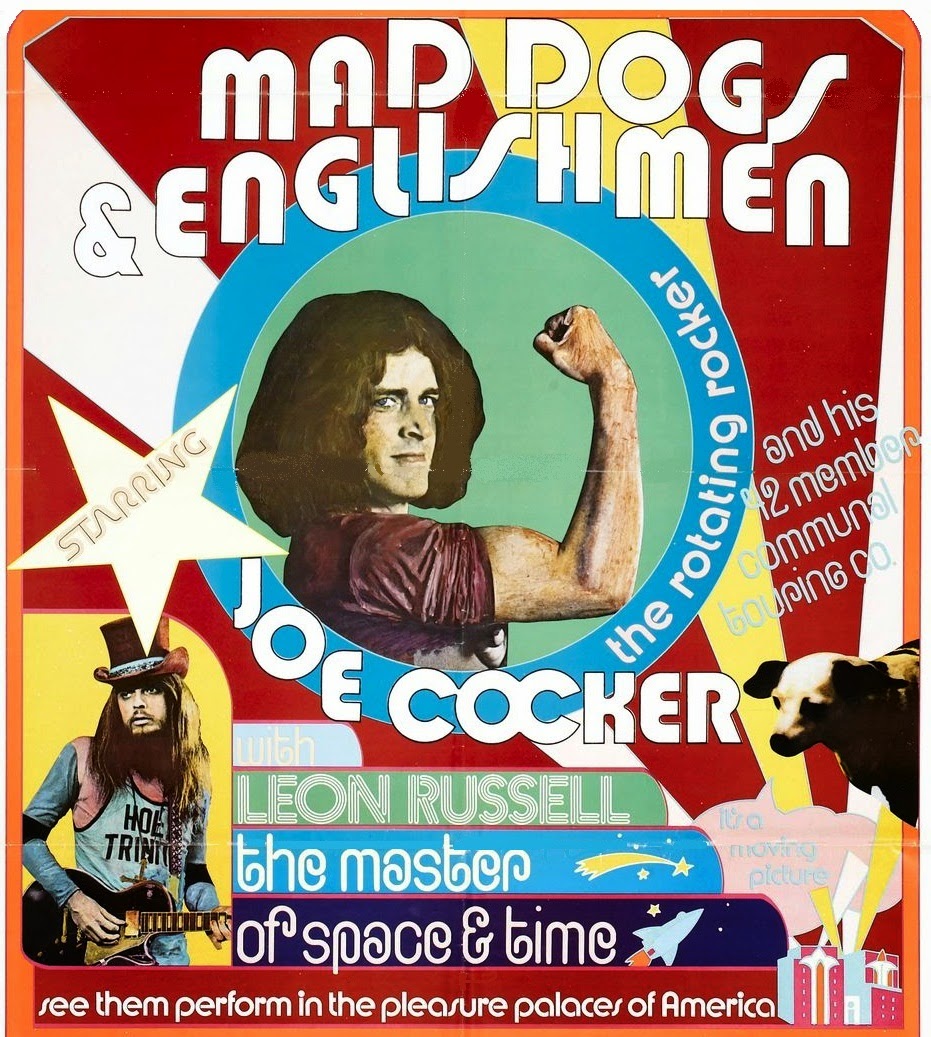 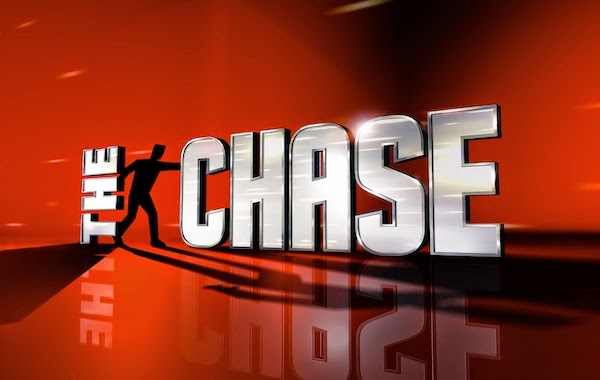 My two favourite Brtish TV quiz shows, Eggheads and The Chase, have contained typewriter-related questions in the past week. On The Chase, a contestant was asked which James Bond actor paid £50,000 odd for Ian Fleming's typewriter. As the contestant was Scottish, he guessed Sean Connery would have been too frugal to pay that much, Roger Moore too frivilous, but that Pierce Brosnan would have felt some sentiment toward such an item. On Eggheads, however, three incorrect options were offered as possible answers to a question about the industry in which Sir Alex Ferguson was involved in Glasgow, before finding fame and fortune in football. Typewriters was not one of the them (shipbuilding was given as the correct answer). As you may well imagine, I have fired off a stern and indignant typewritten letter to the BBC. 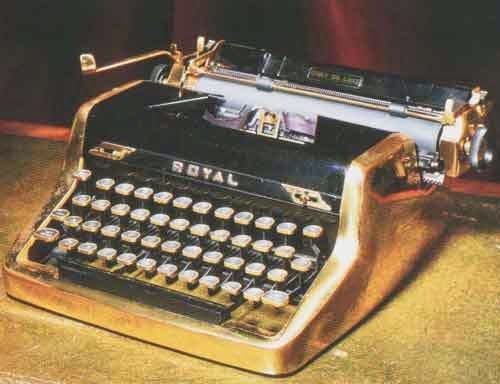 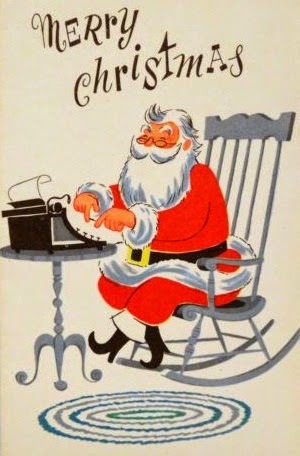 Posted by Robert Messenger at 15:50

I'm glad you liked it :) And thank you for the Groma card!

I'm currently back in Poland at my mum's place where I still have part of my CD collection. I was browsing through them yesterday - coincidentally the first one that popped in my hands was "Cocker Happy" then a little bit later on I heard the sad news on the radio. I was always his fan and attending his concerts in the past was always special.

As for the Eggheads - I hope they got their earfull - and rightly so!