According to the pushers at Pusher, this is what looking out the front window of this place on Christmas Day would reveal - if it was in the Northern Hemisphere, and if we were to experience a White Christmas. No such chance, I'm afraid! Still, as Georg Sommeregger commented this week from snowy Switzerland: "Good to know you are down there." 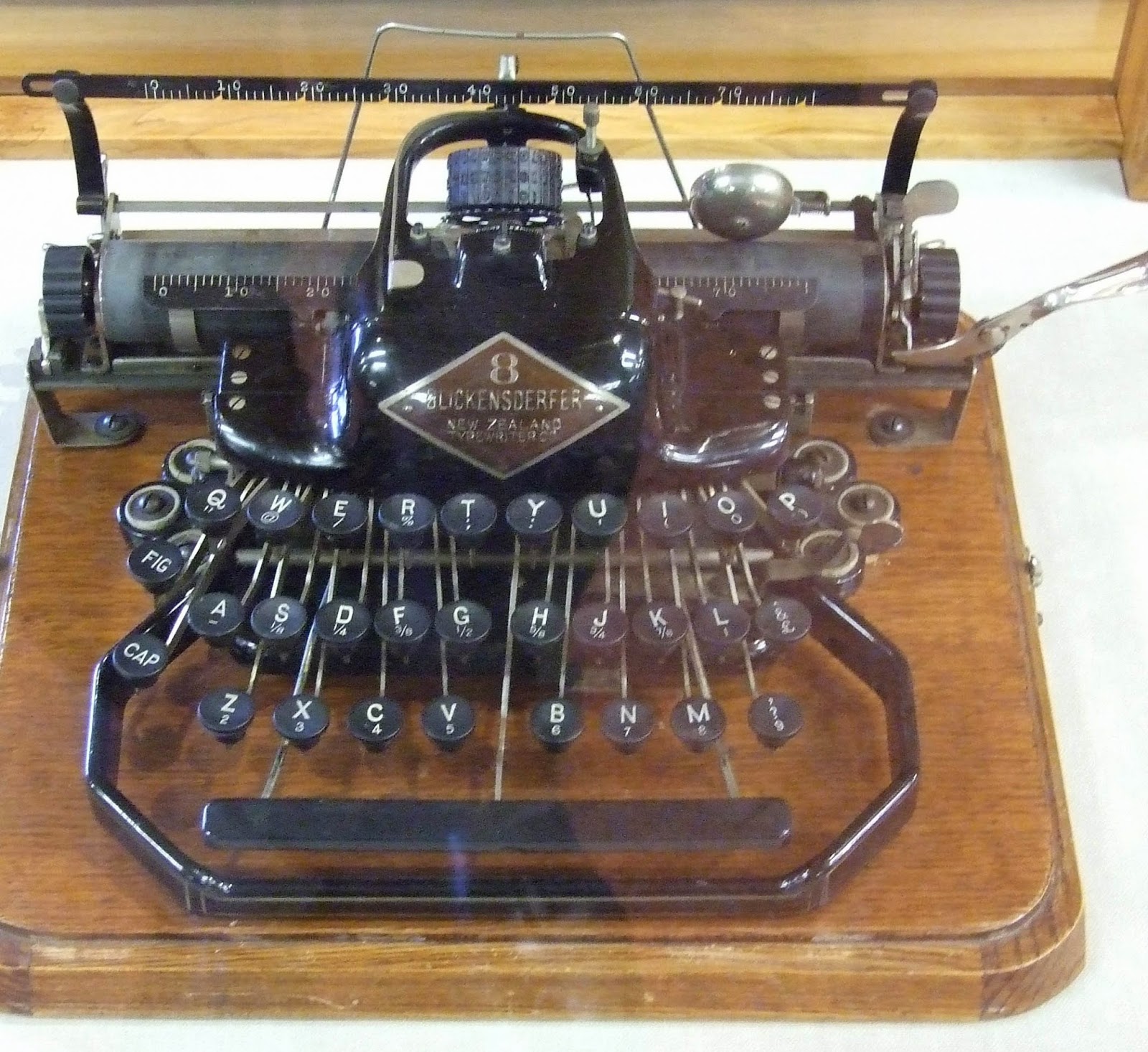 Leading New Zealand sports historian Ron Palenski has alerted me to a Blickensderfer 8 typewriter which forms part of an exhibition being staged at the Dunedin Public Library in Otago. It celebrates the extraordinary life of Sir Alfred Hamish Reed (1875-1975), one-time owner of the New Zealand Typewriter Company and Blickensderfer's sole Australasian agent at the turn of the last century. In 1897 Reed was sent to Dunedin to start up the NZTC branch there and took over the entire company in 1902. He sold it in 1911. 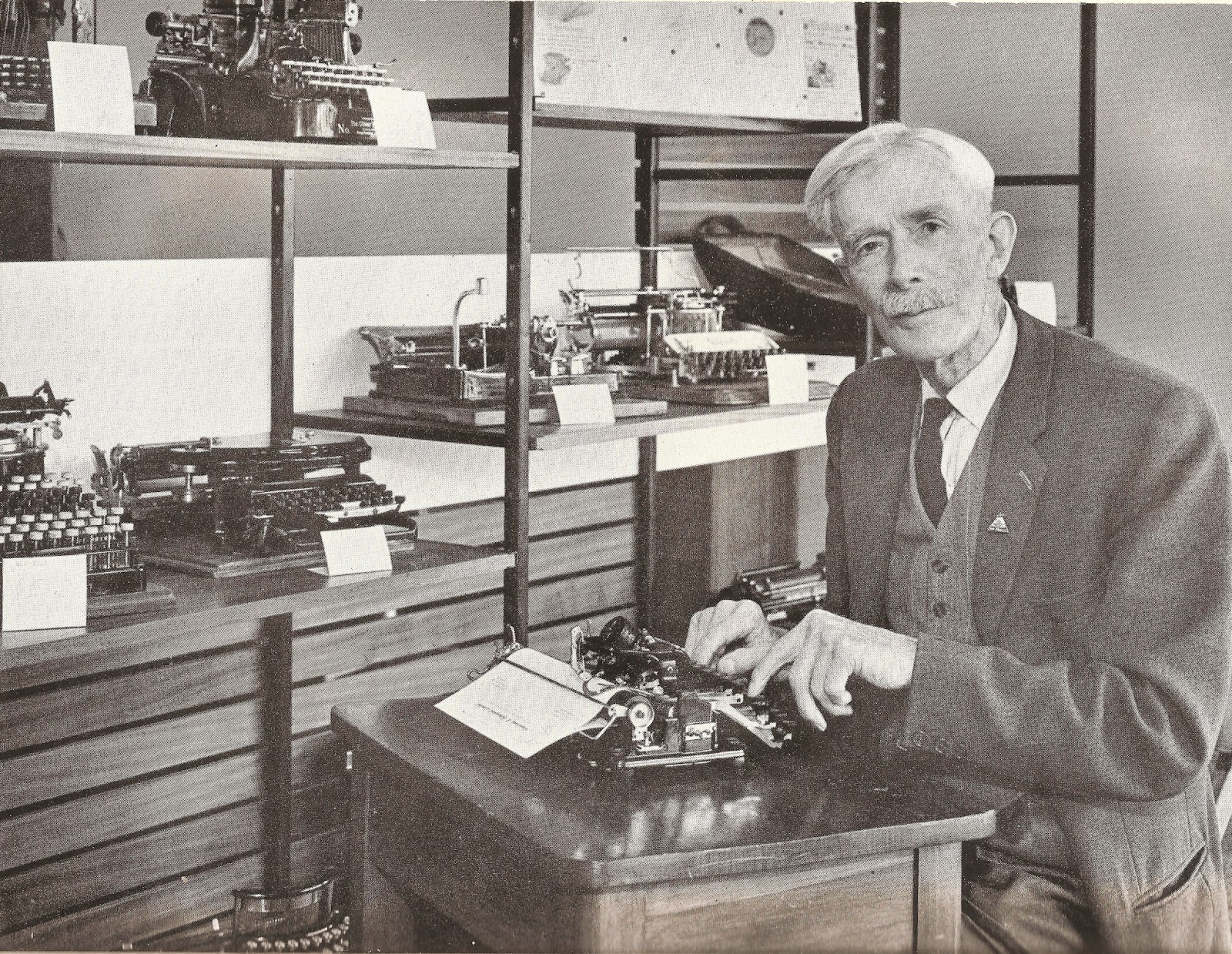 Curators of the present exhibition have identified the Blick 8 as Reed's own, though it is not the one he is seen using in the black-and-white image above (taken in the early 1960s). The curators incorrectly dated Reed's Blick 8 to 1897, which is 10 years before the Blick 8 appeared. Nonetheless it is an interesting machine, as it has a QWERTY keyboard but none of the tabulation attachments usually seen with a Blick 8 (which were initially offered as a free option). It is certainly an early version, as it has a back-spacer lever rather than a back-spacer key (and the bell is in the same position as it is on the Blick 7). But it does have the two-piece typehead casting, so it is definitely an 8. Quite aside from it having been used by Reed himself, it strikes me as being a rare example of the 8. 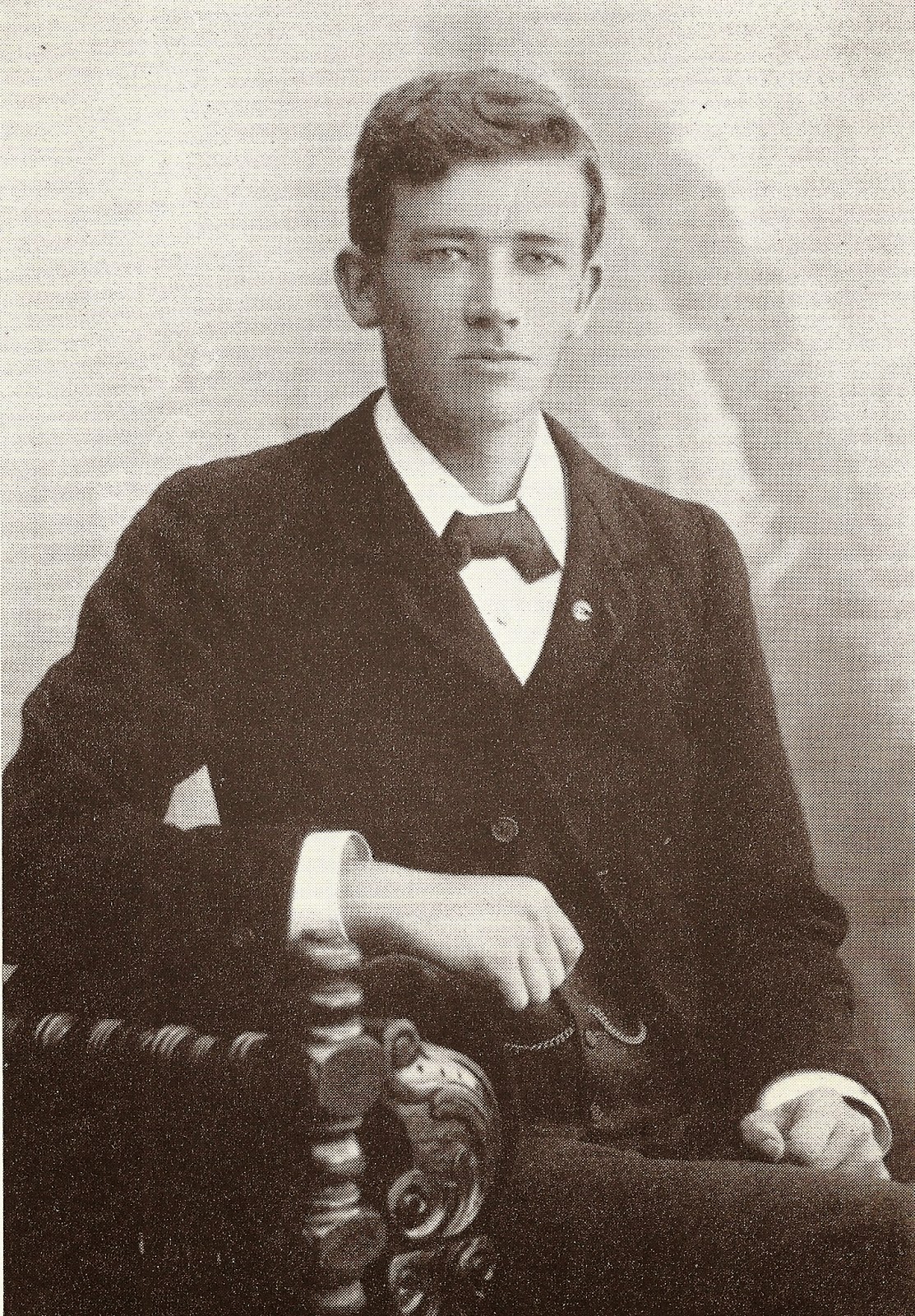 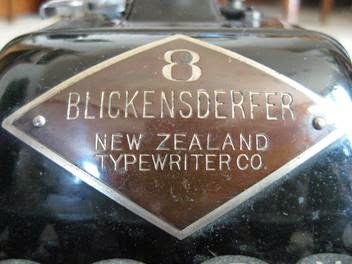 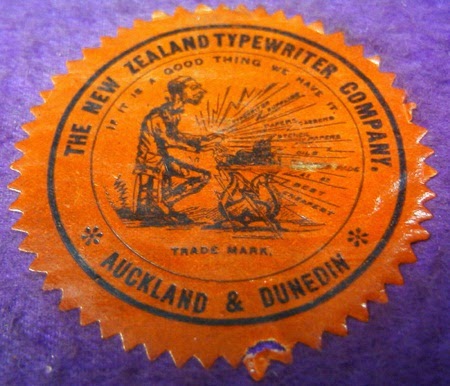 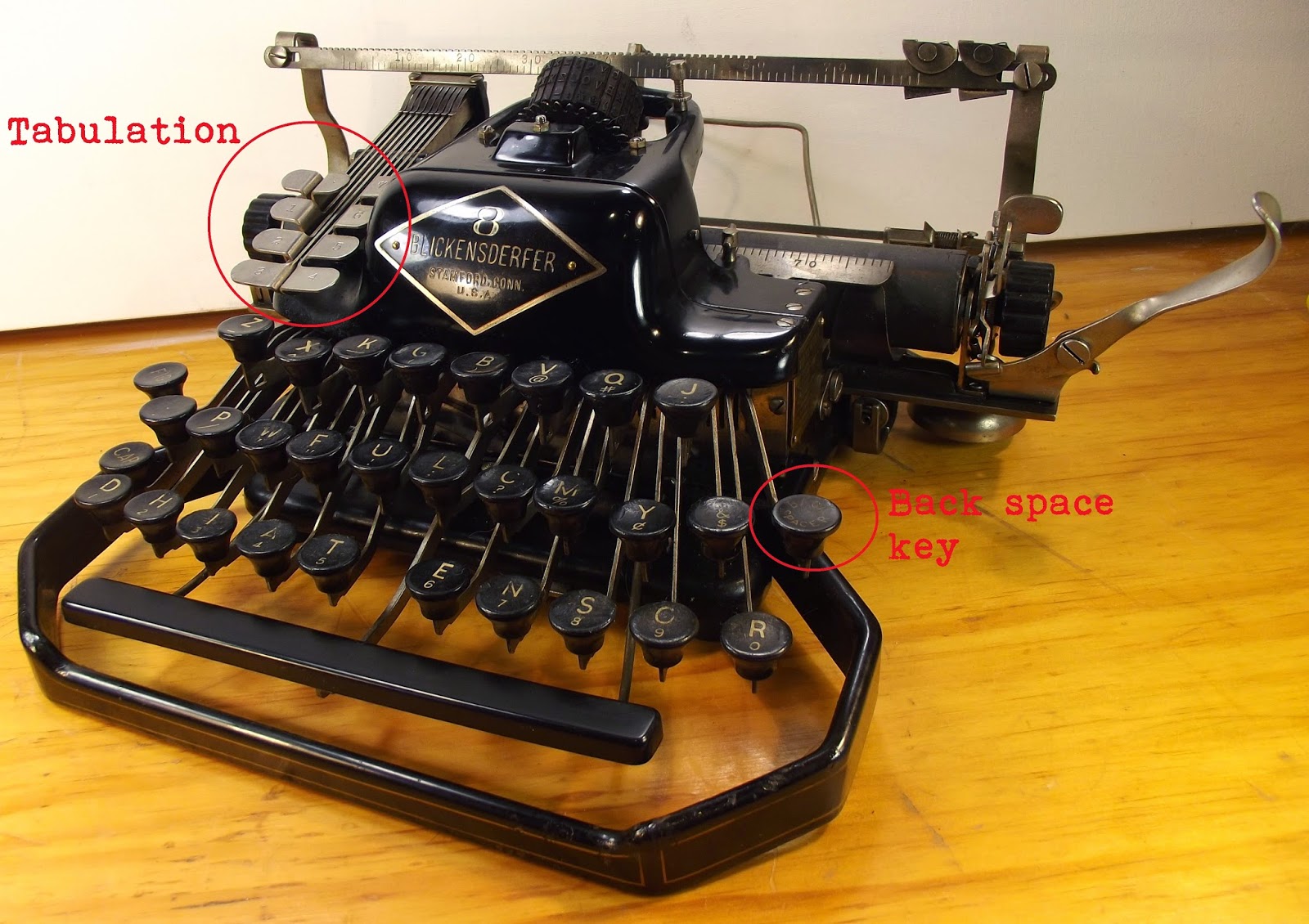 More details on Reed's life as a travelling typewriter technician and as owner of the NZTC can be seen here. A lengthy article on Reed also appeared in the December 2010 edition of ETCetera (No 92). However, it is now some years since back copies of ETCetera were made available online in PDF form, and it is to be hoped that the ETCetera website may soon be updated to make more back copies available. Ted Munk's interesting post on the current ETCetera board election highlights the need to address this issue. So please, please, please, if you are reading this, can you pass on the password to "the appropriate authorities". If you do, in the coming days, it will be ... 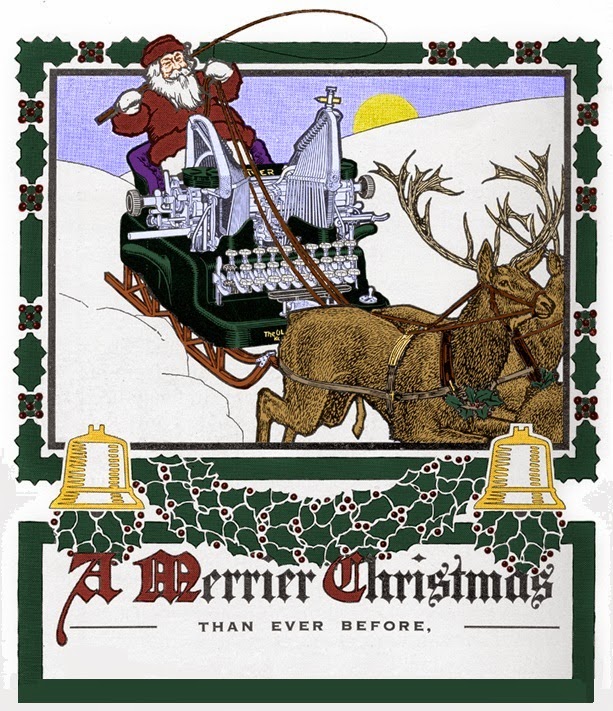 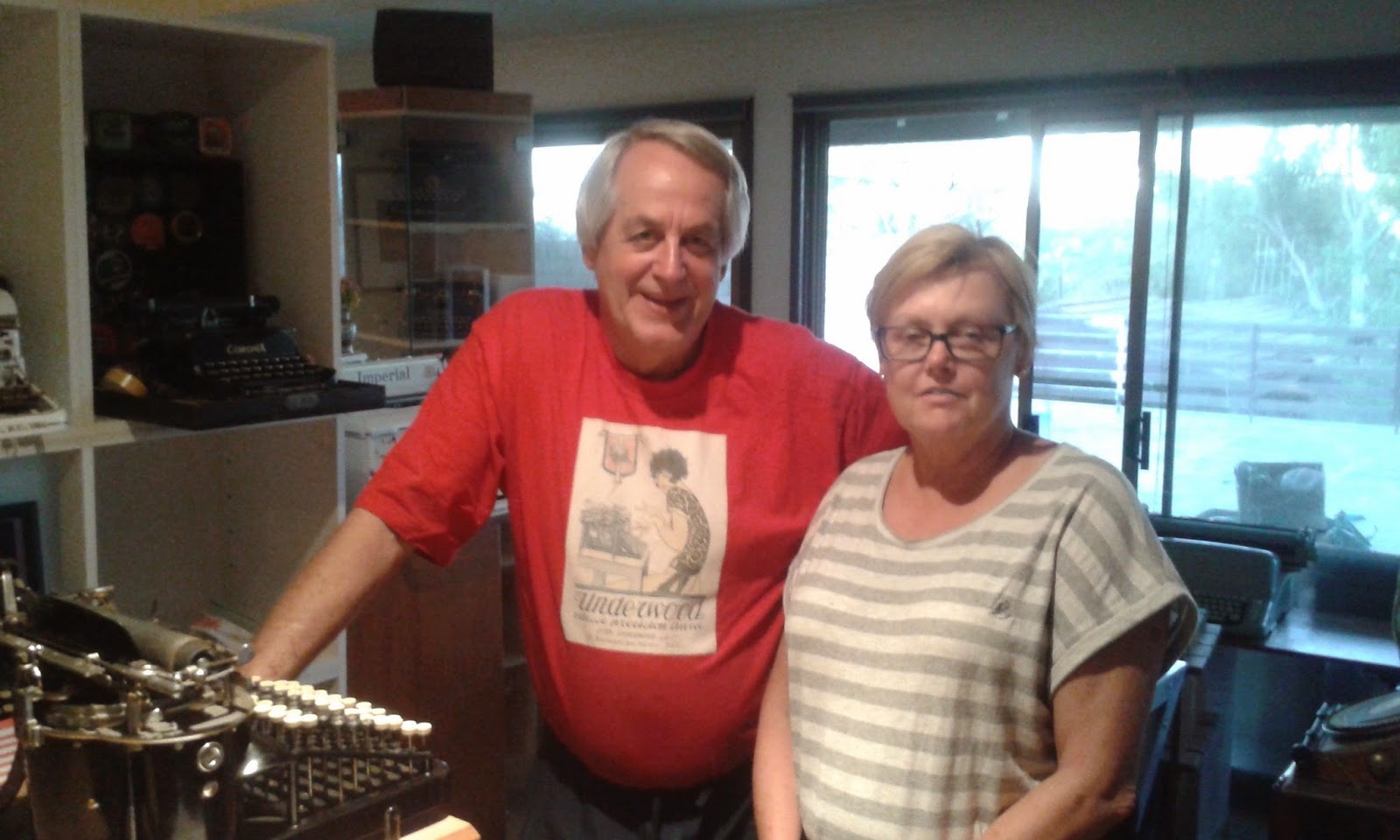 Christmas came early for me with the arrival in Canberra last Friday afternoon of Melbourne typewriter collector Diane Jones and her partner Steven Harrison. To my considerable surprise, and delight, Diane and Steven brought with them the gift of a Varityper. To my considerable relief, they left here on Saturday evening in a 4WD packed to the gills with high quality typewriters. In the interim, the three of us had enjoyed a night on the town and a tour of the many treasures Canberra has to offer.
I first encountered Diane earlier in the year when I sold her a couple of Underwood portables on eBay. I could tell immediately that she and I were on the same wavelength, because of Diane's very obvious understanding of typewriters and her thorough appreciation of their finer points. What also shone through was her sensitivity and sensibility. She was a pleasure to deal with, and at a very rocky time for me she was, from a considerable distance, a steadying influence.
In person, Diane turned out to be everything I had come to expect from our lengthy exchanges of emails and telephone conversations. It was great to meet such an agreeable, thoroughly pleasant typewriter collector, one who was a professional typist (back in the day) and who has retained a deep but modest love of typewriters. Above all else, Diane had proved to be entirely trustworthy, and has helped restore my faith in humanity.
What's the goss? I'm not much one for Hollywood gossip, but from what I can gather, Angelina was first reported to have offered $250,000 for one of Hemingway's many typewriters, intending to give it to Brad as a wedding gift. But she then thought better of it. Or so the story goes ... 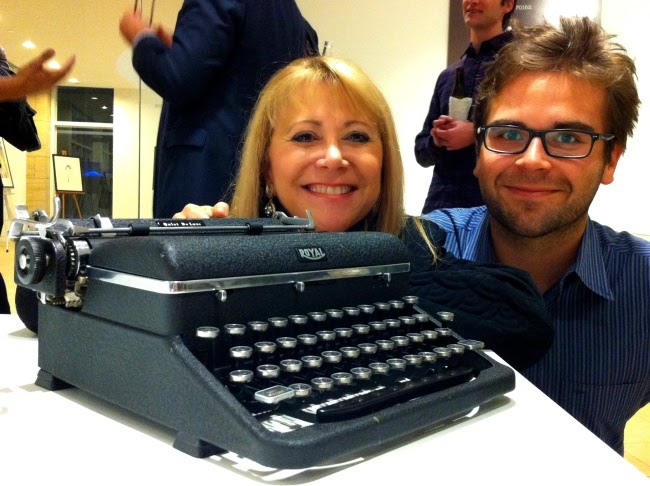 Laura Siegel Larson and Michael Larson, daughter and grandson of Jerry Siegel, with Siegel's typewriter. Below, Siegel with his Royal. 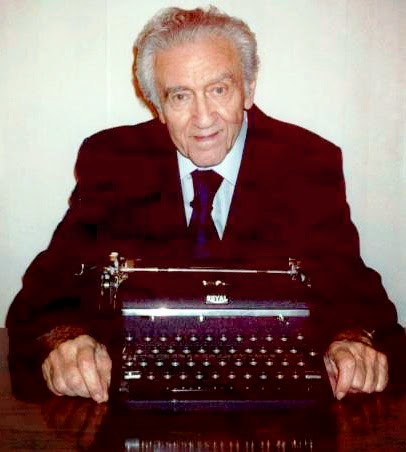 Meanwhile, the Royal portable which had belonged to Superman co-creator Jerry Siegel turned up at the Paley Centre for Media in Beverly Hills as part of the Soboroff collection exhibition. 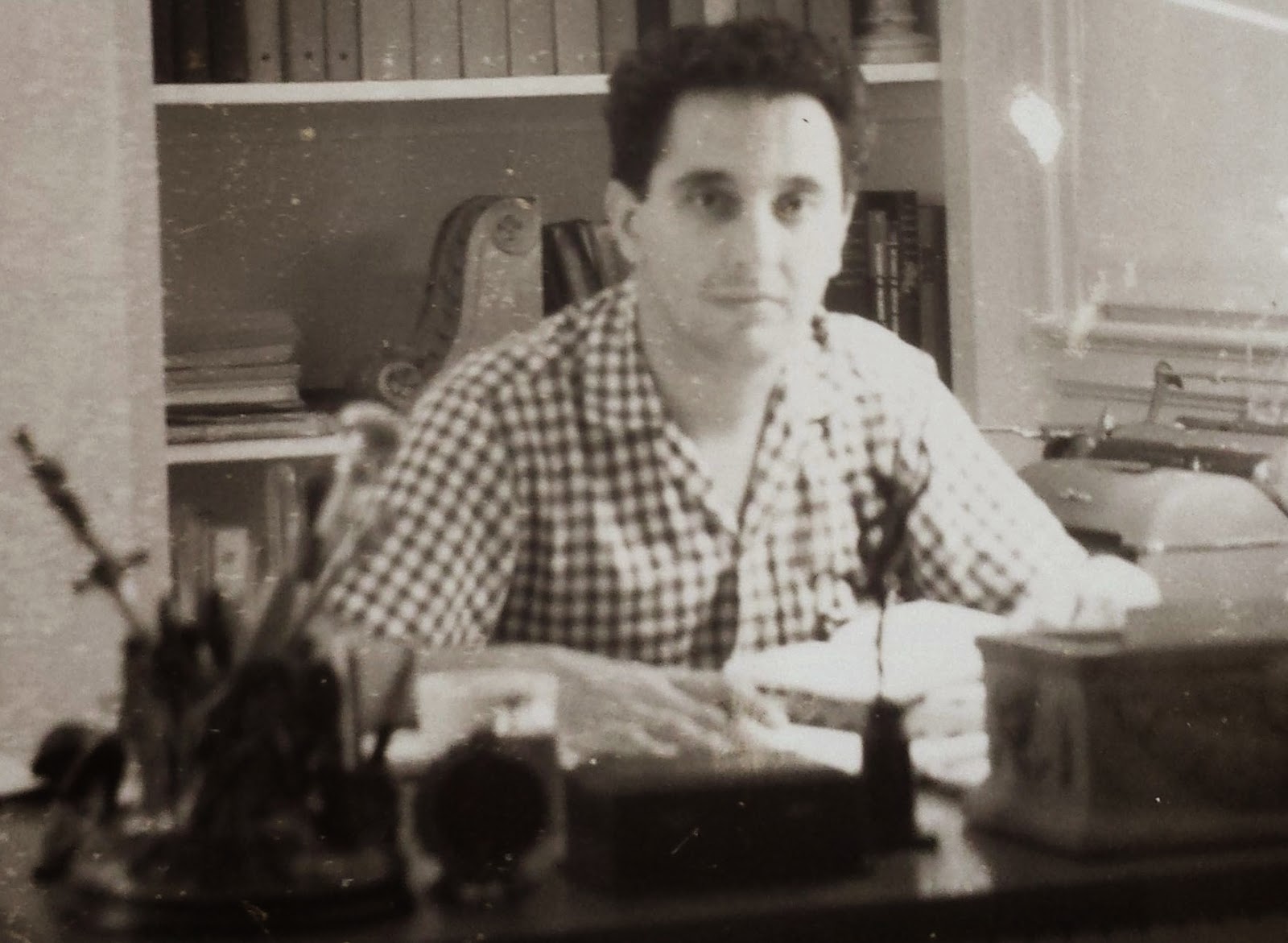 M e a n w h i l e , the Olympia standard upon which Joseph Stefano wrote the screenplay for Psycho was expected to fetch $25,000 at auction. I can't find an outcome, so maybe it was passed in?
Handy hint
Did you know? 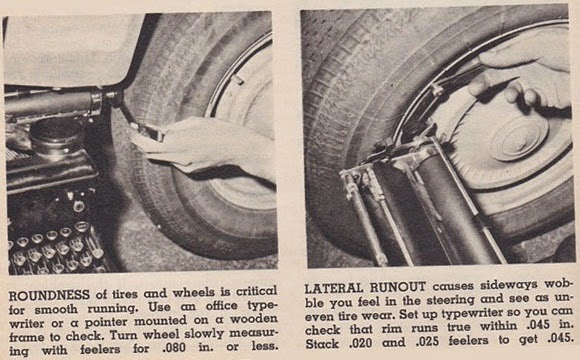 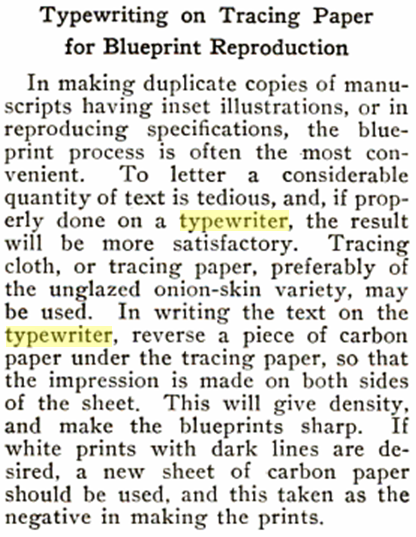 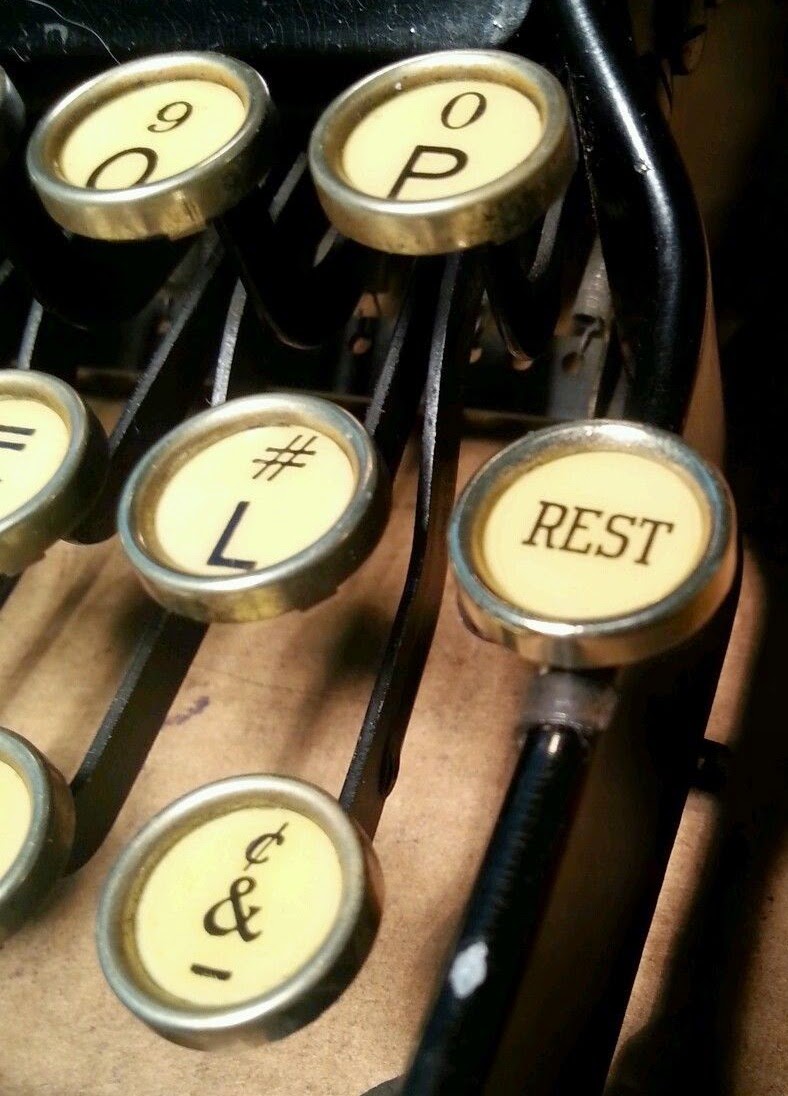 A Southlake, Texas, typewriter seller has had listed on eBay for some time a rest key for a Corona 3 portable typewriter. I'd be fascinated to know what the one offer was that the seller has received (and rejected) for it, but so far there have been no takers at the "buy it now" price of $2500. The seller says, "The ridiculously high price is probably accurate - based on the key's rarity - yet you might get lucky and catch me when I'm broke. That being said, I'm in no hurry to sell this thing; the price won't go down much."
Lynda Beckler highlighted the listing in her "Online" column in the latest issue of Typex, under the heading "For the collector who has everything ..." Lynda pointed out the key will not fit on a Corona 3 Special, "just the older model with shift keys only on the left". I note the typewriter used to illustrate the key's use has a number sign, which is on one of my Corona 3 Specials, but in another (left side) place on the keyboard. Still, it strikes me as an early use of this "hash" sign. 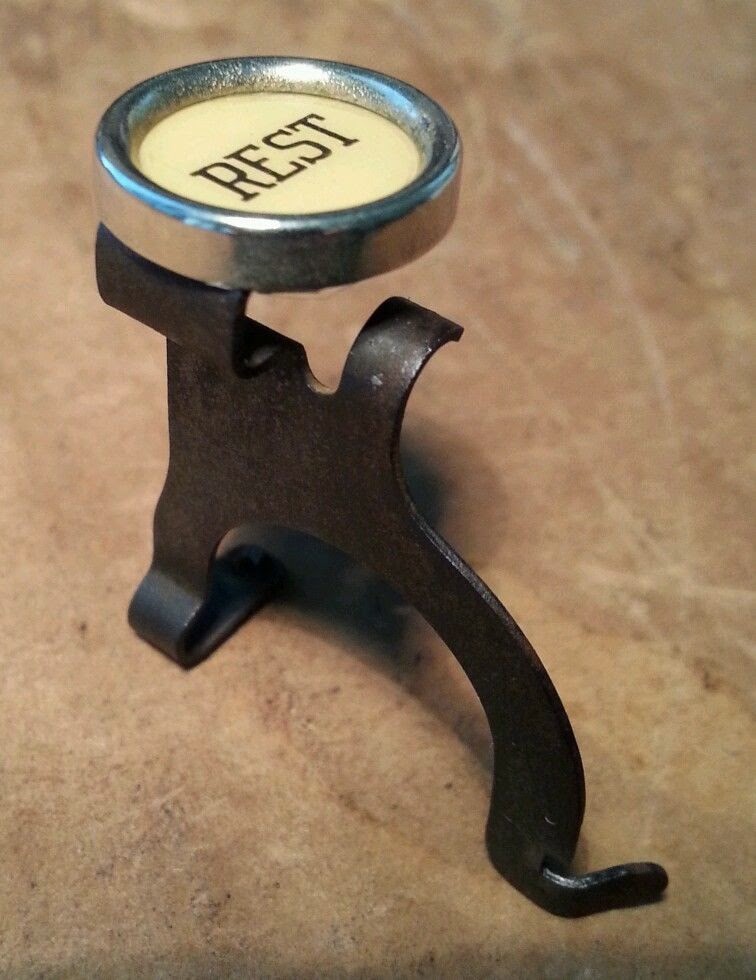 David Lawrence in Auckland drew my attention to the rest key listing, saying "I wish I could laugh, but I cannot."
David went on to tell me: "Last week a man phoned me and asked if I wanted to buy more than 100 typewriters, all with their keys chopped off. I declined. I could not bear to even think of all those lovely machines, eyeless in Gaza, and what I would like to do to the man responsible. He calls himself a jeweller." I would call him a vandal.
Christmas Day, 1916,
Oakland, California 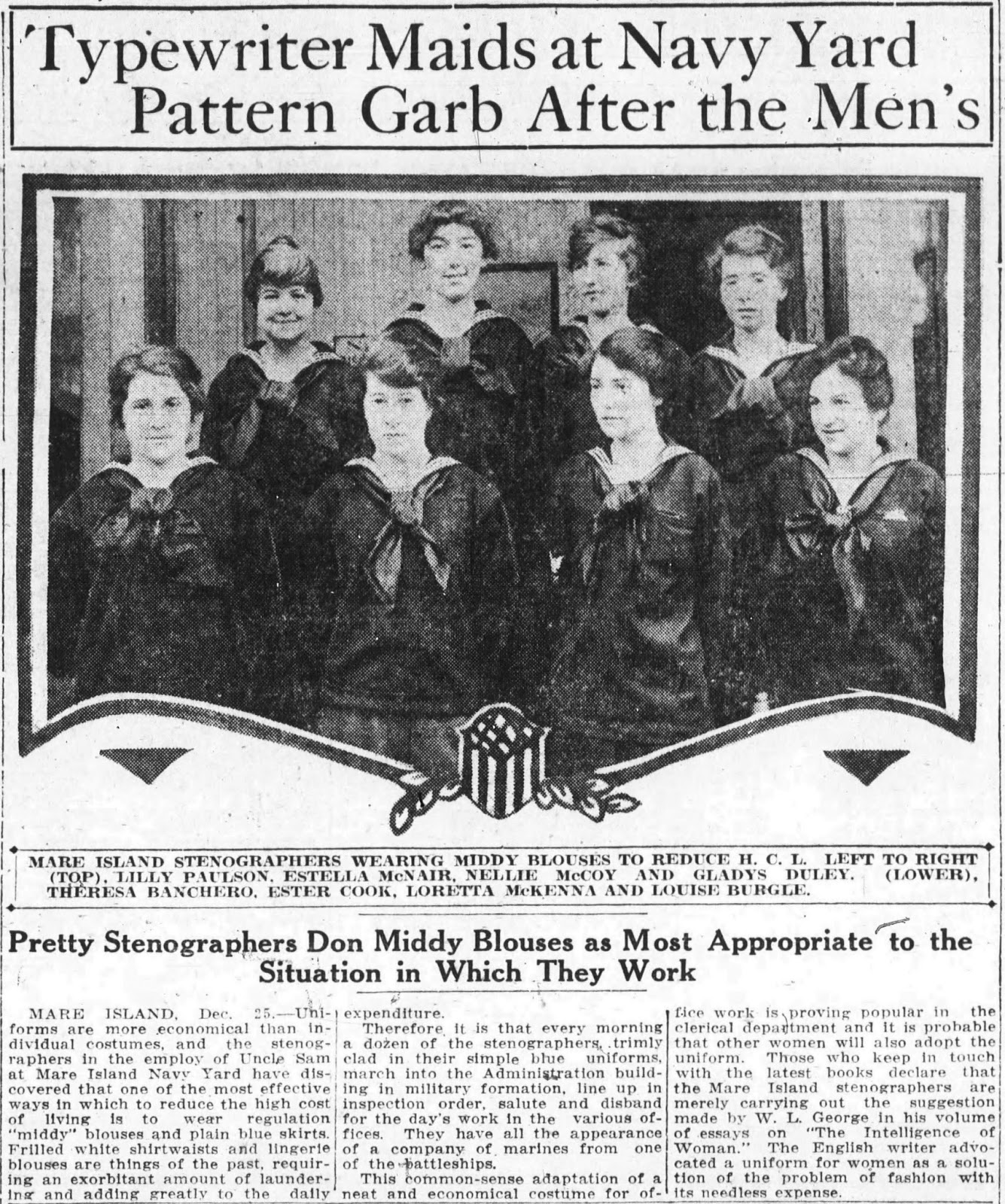 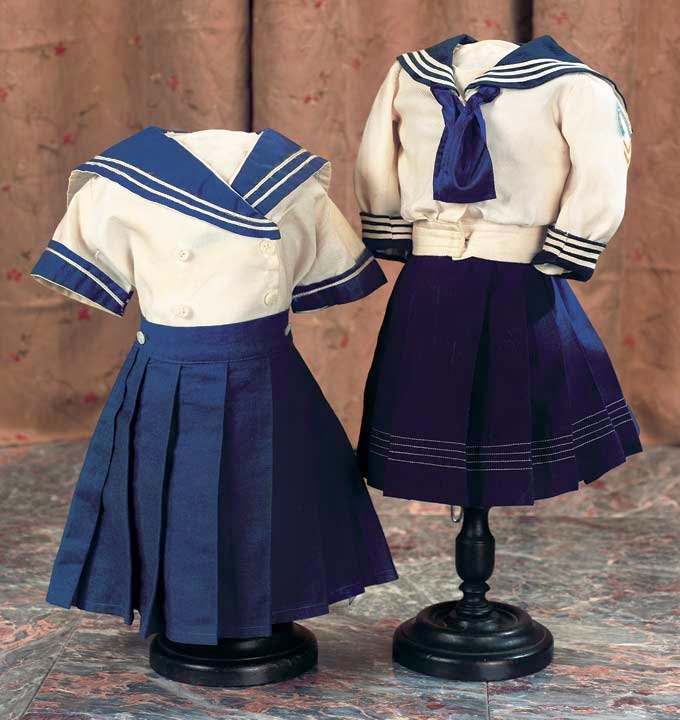 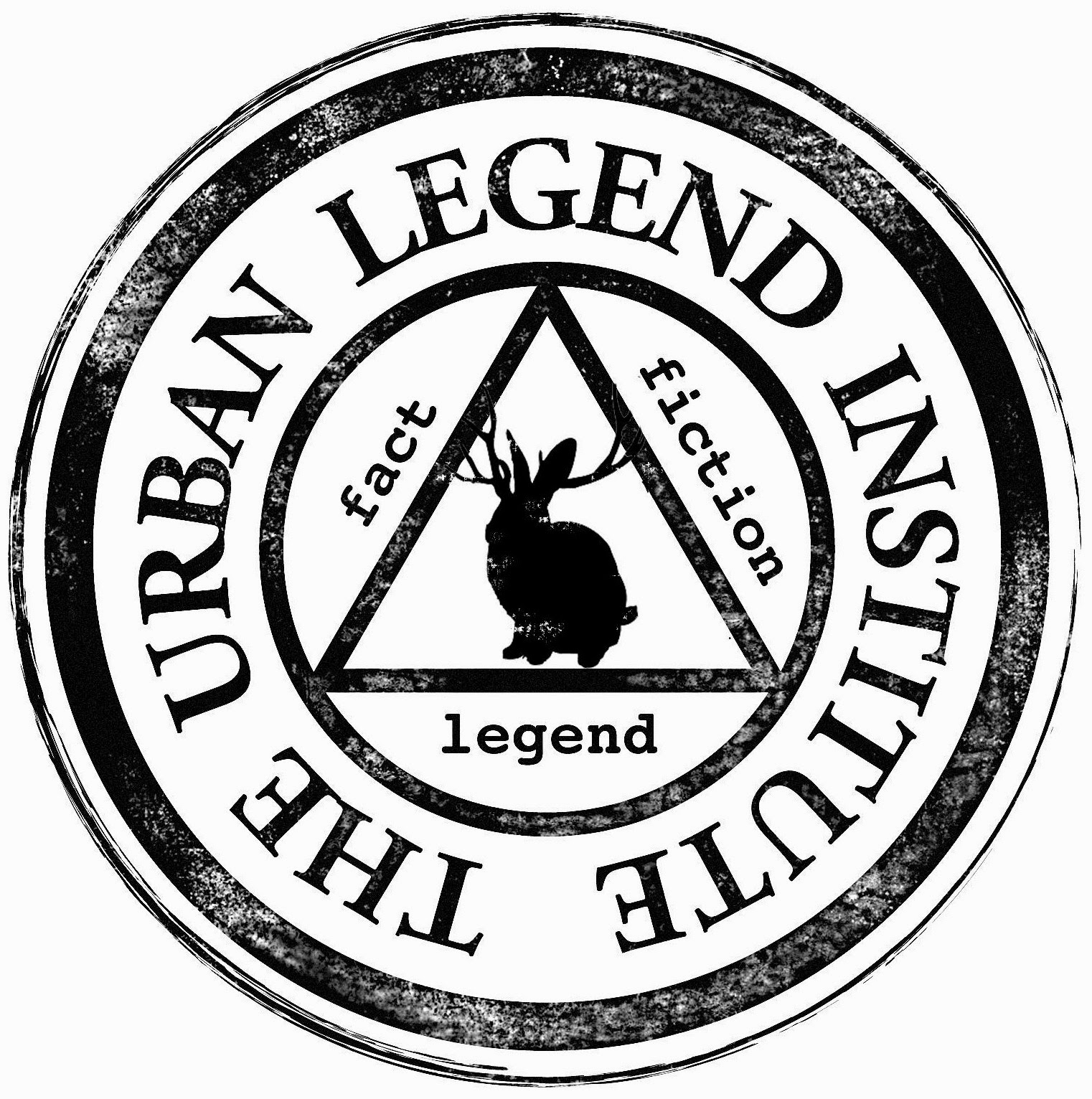 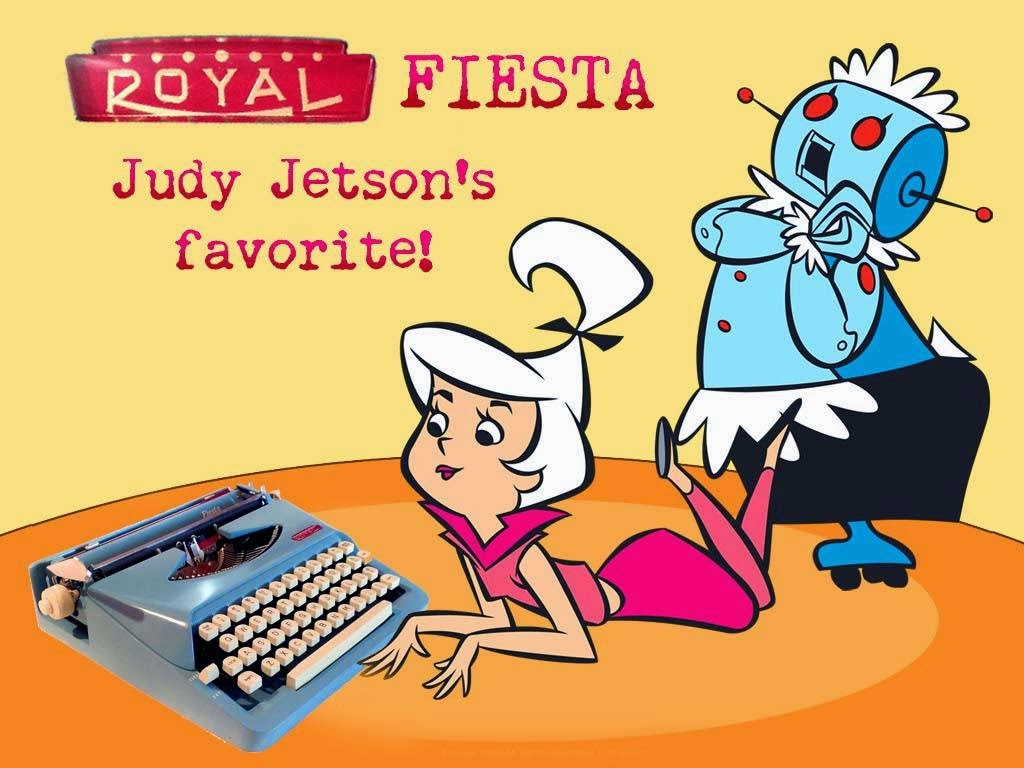 Many Typospherians may not necessarily be in a position to buy typewriters from The Urban Legend Institute (WordPlay) in Cincinnati, but by jingo they'd be doing themselves a big favour by just looking at the mouth-watering ads that appear on Urban Legend's Facebook page. 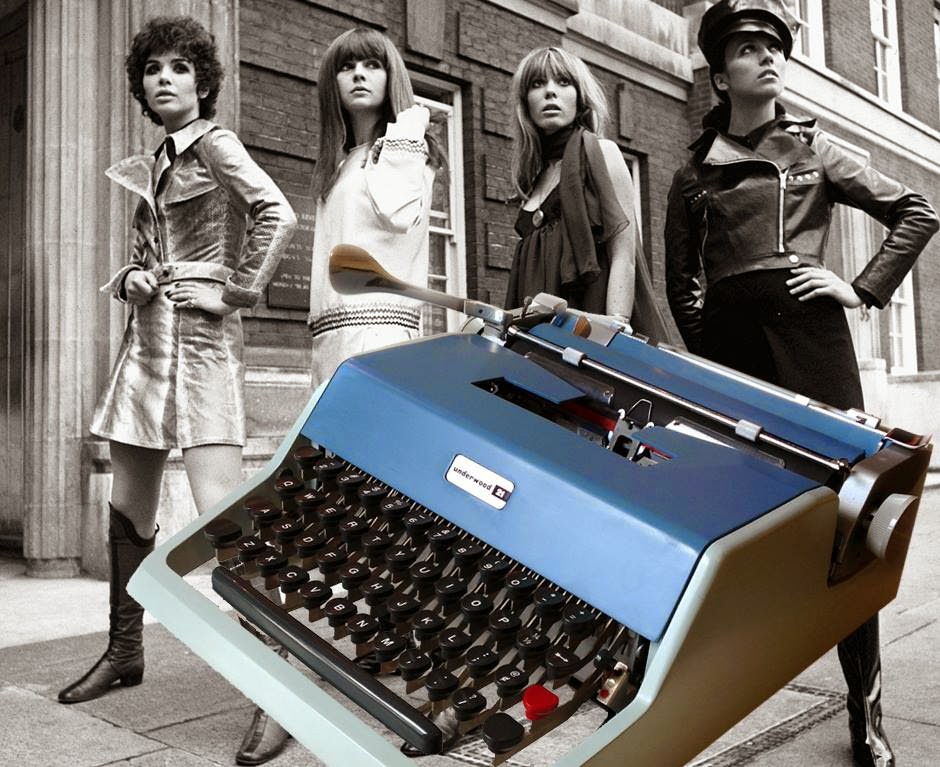 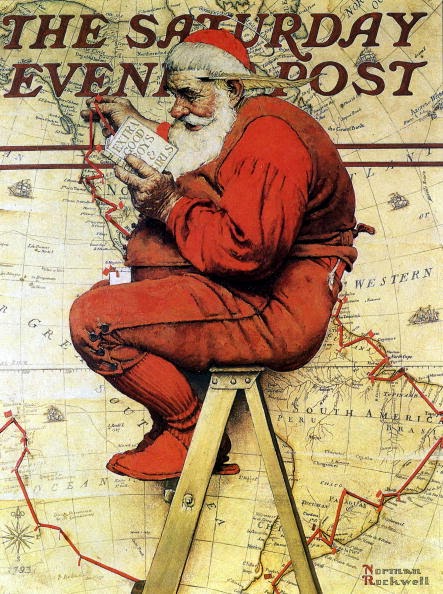 Posted by Robert Messenger at 09:46

Highly entertaining, as ever. Thanks for pointing folks to the ULI page.

(There's a kind of captcha here I've never seen before: just click a button to prove "I'm not a robot." No need to tell tales about strangers' house numbers. I approve!)

I am loving these Christmas typewriter ads. Thanks for posting them. What, however, is a "rest" key?

Tank you Richard.
Terry, sorry for being slow to reply. The rest key is to keep the typists's right little finger "occupied" and "out of trouble". I imagine that applies only to touch typists?