The Short and Sporadic Life of Canadian Oliver Typewriters 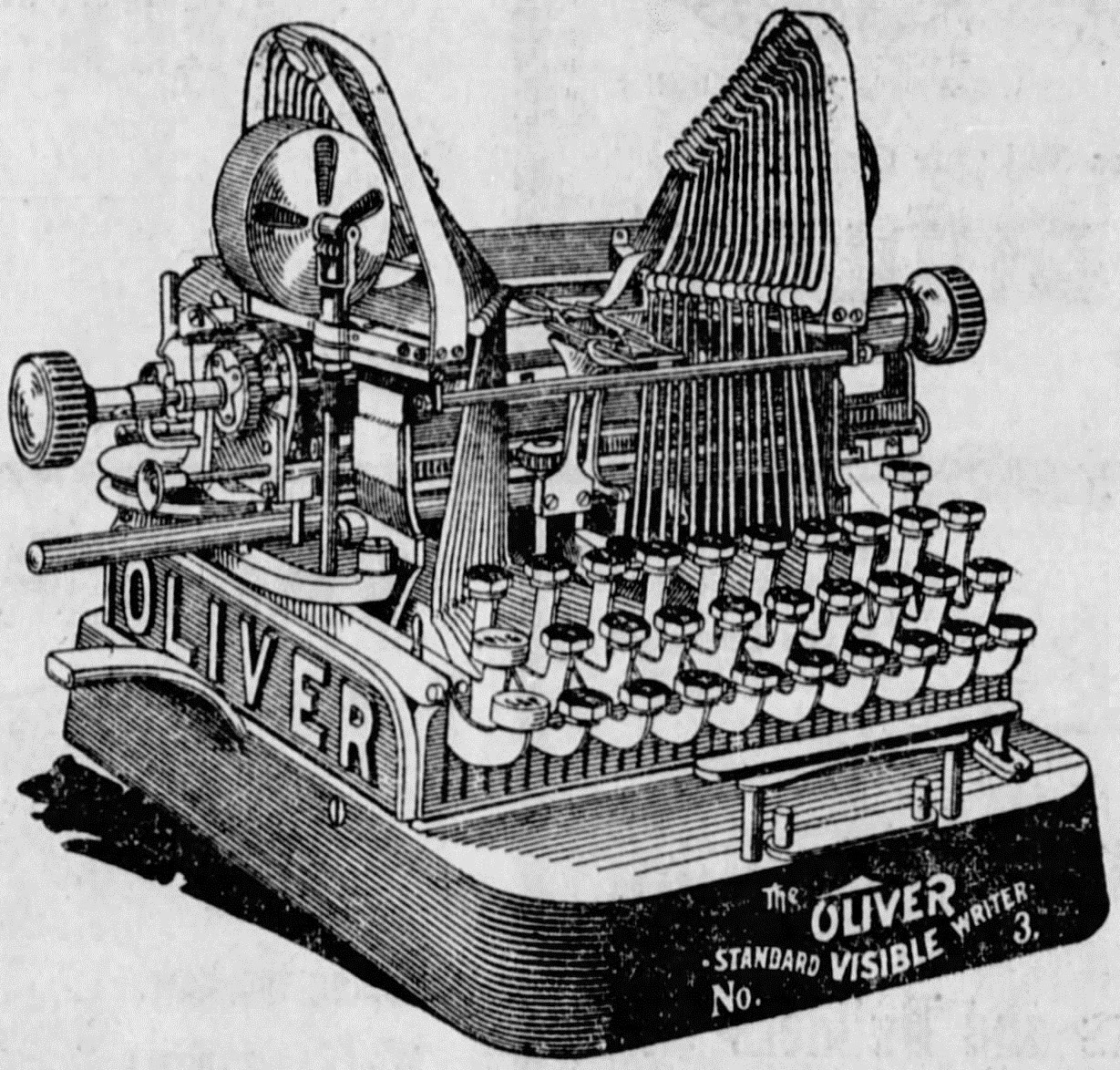 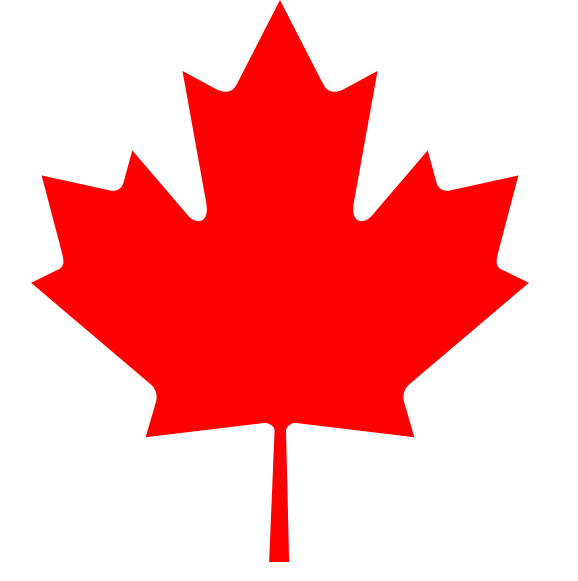 Note the vertically mounted
ribbon spools on this Canadian-made Oliver No 3. 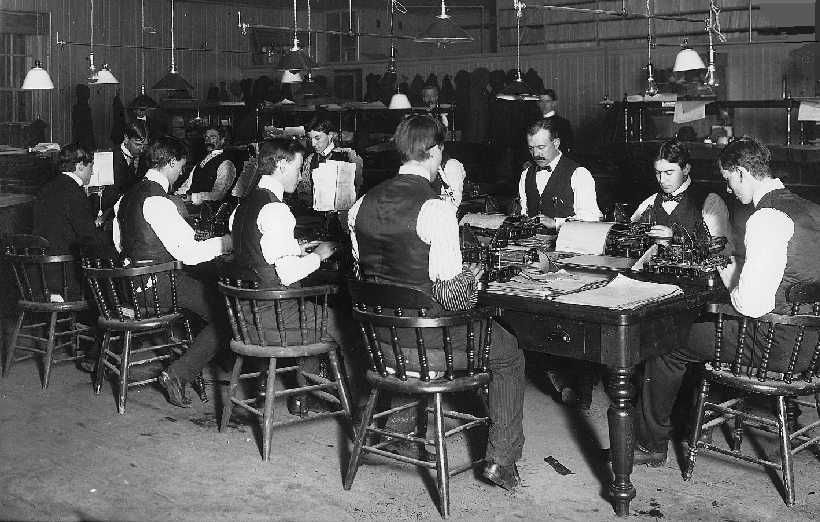 Canadian-made Olivers being used in Montreal in 1901.
Newark, Delaware, typewriter collector and historian Peter Weil got me thinking yesterday when he wrote "The manufacturer in these [1906 Oliver advertisements] is clearly listed as the Canadian Oliver Typewriter Company. Yet, there is the matter of Olivers made by the Linotype Company in Canada." Peter had sent me two advertisements, one of which was in French: 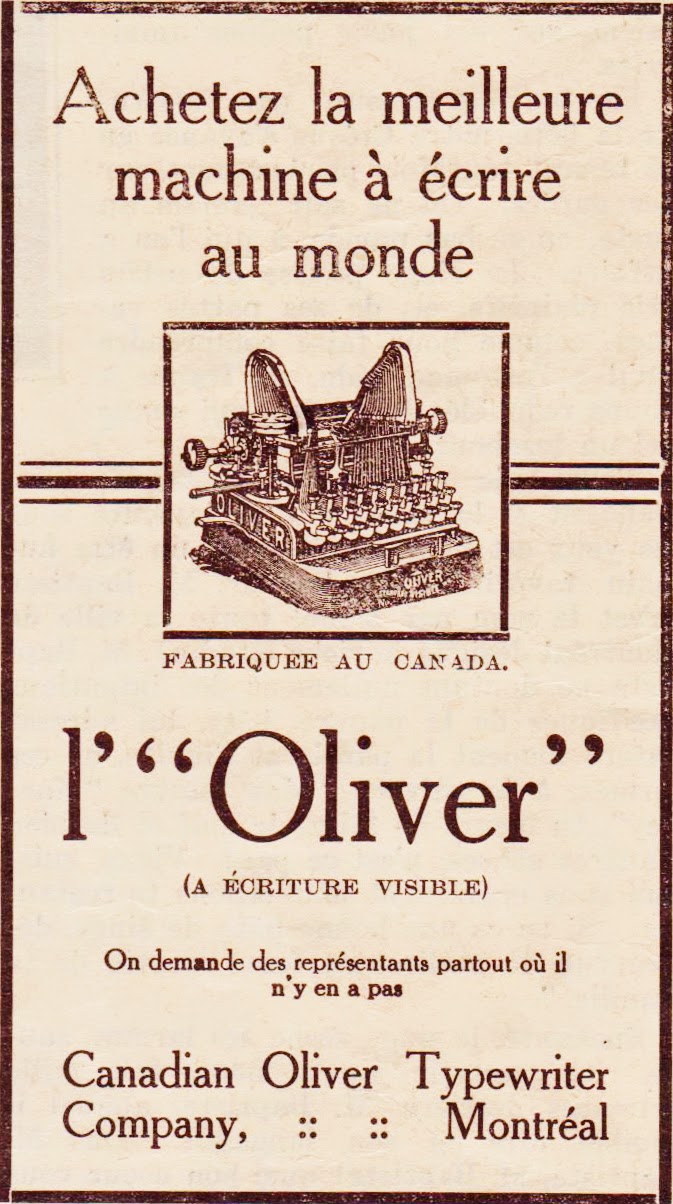 The ribbon spools of this Canadian-made model of the Oliver No 3 are horizontal.
Within a short time I was able to provide Peter with a definitive reply. The Canadian Oliver Typewriter Company and the [Canadian] Linotype Company were one and the same organisation, both originally based at 156 St Antonie Street, Montreal, and both controlled by the same man, John Redpath Dougall. 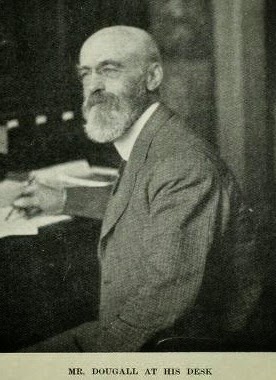 John Redpath Dougall (1841-1934), at one time owner of both the Canadian Oliver Typewriter Company and the Linotype Company and long-time editor of the Montreal Witness. 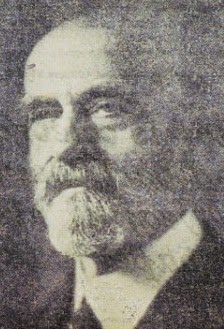 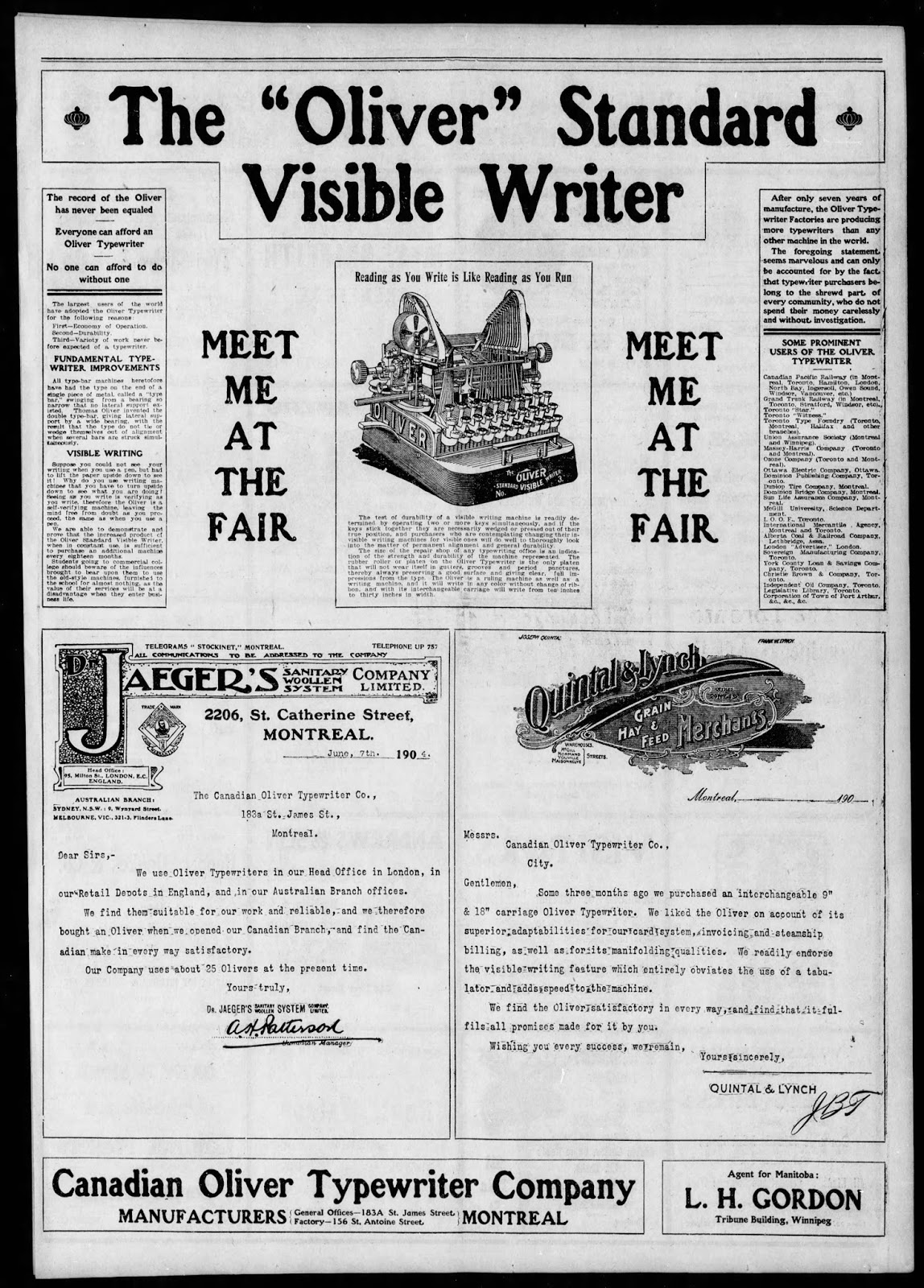 A full-page advertisement in the Winnipeg Tribune, July 27, 1904 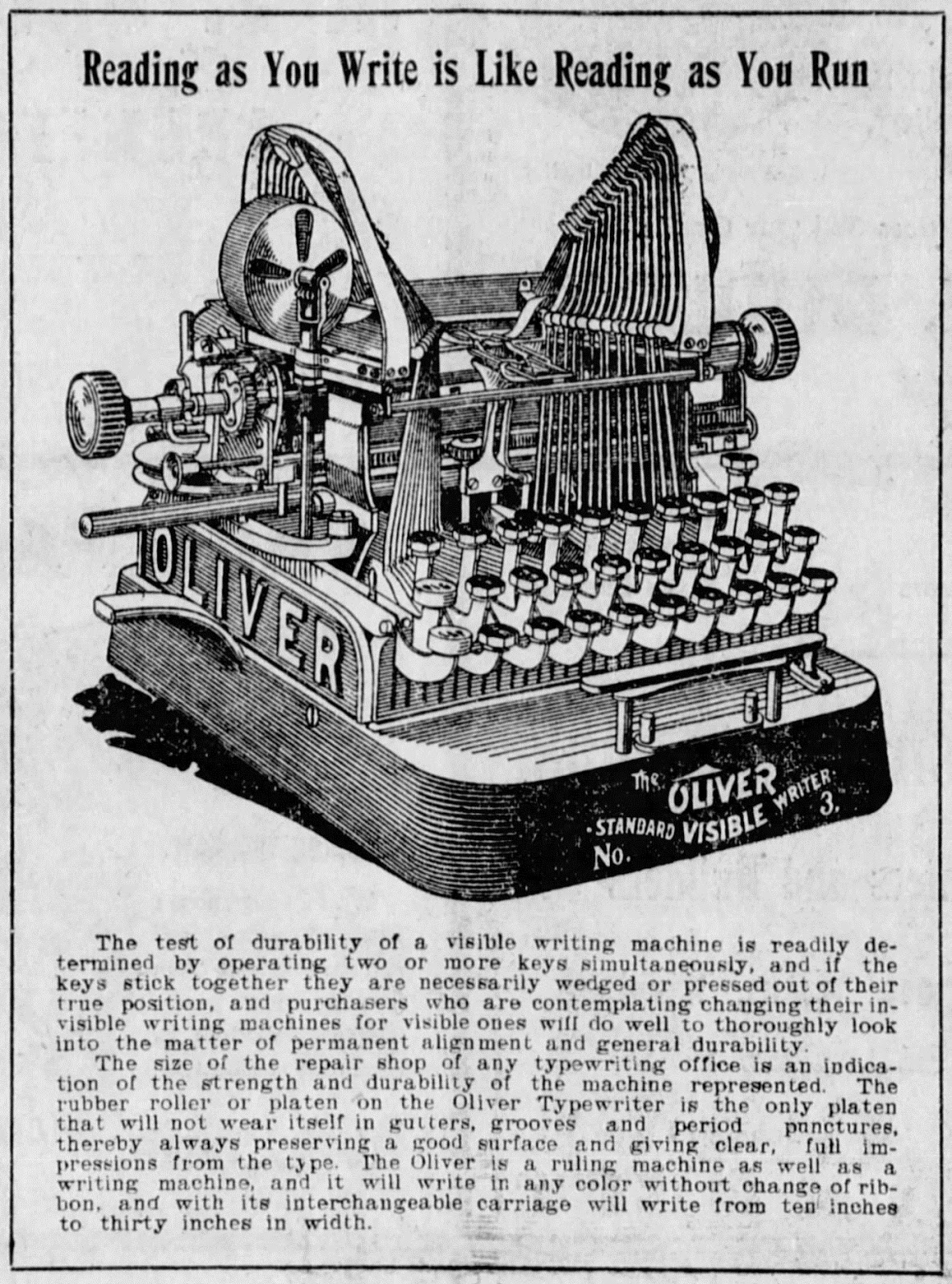 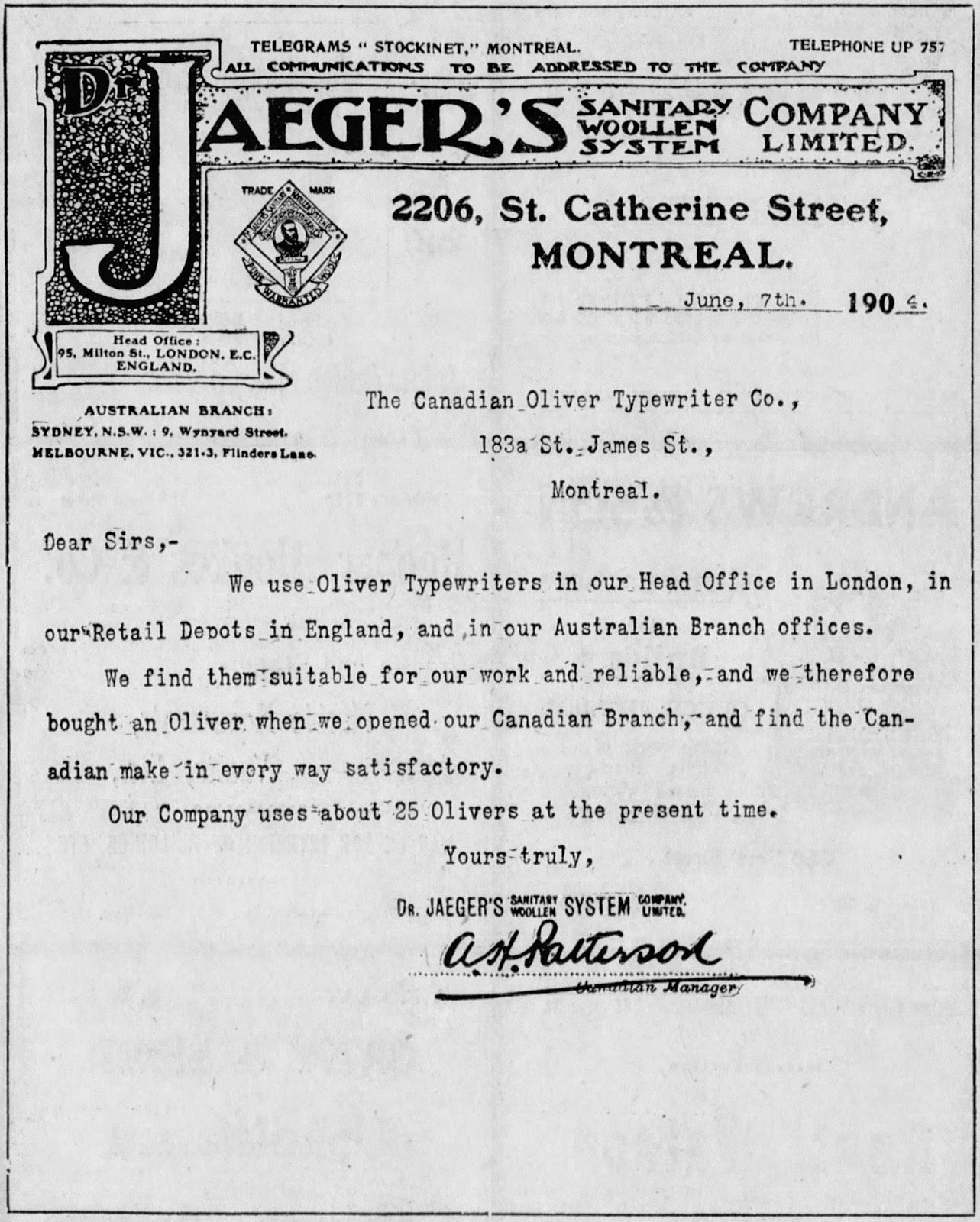 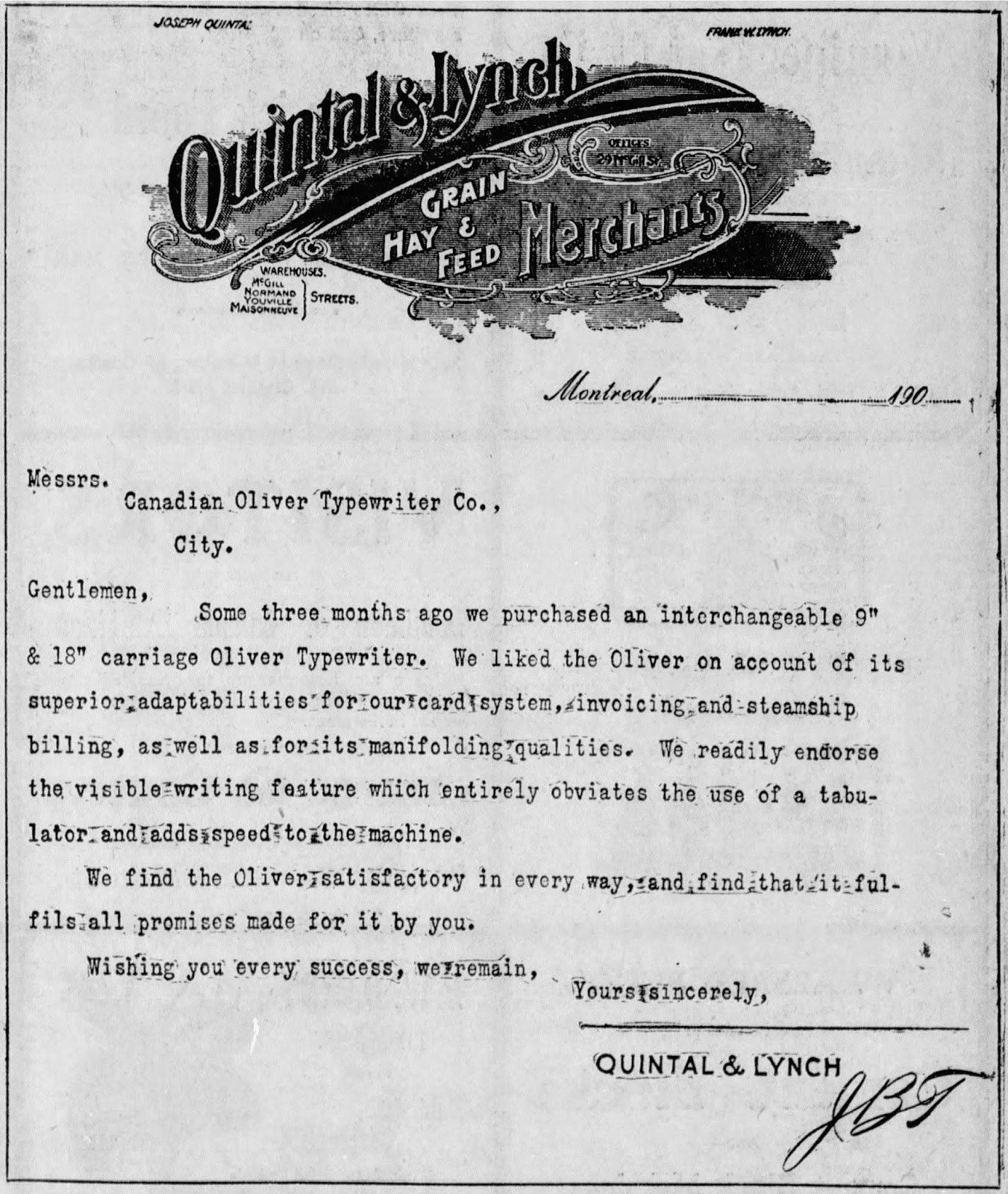 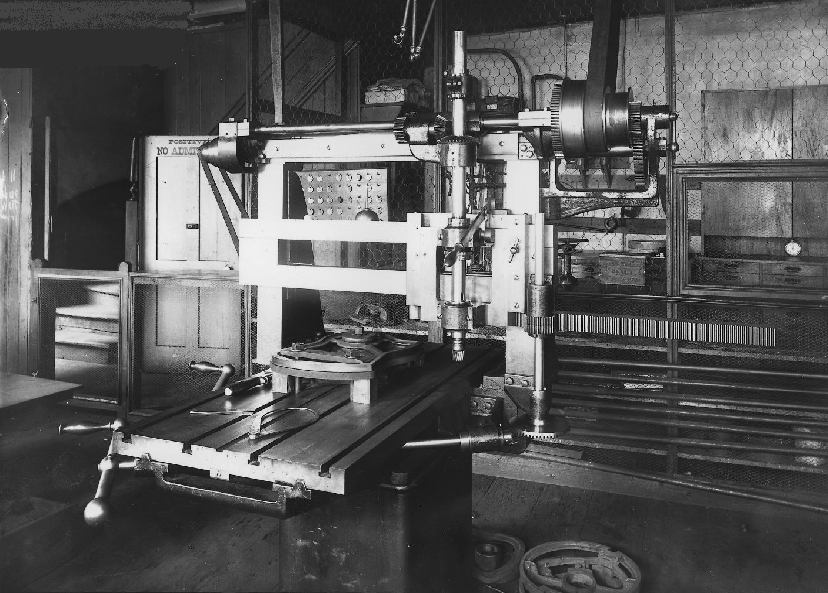 The Linotype plant in Montreal a year before Dougall sold the company to Toronto in 1904.
Dougall founded the Linotype Company in Montreal 1891 and in 1898 expanded it to make variations of the Oliver No 2 and No 3 typewriters. The Canadian No 2 was a short-lived nickle-based $60 model sold by Montgomery Ward as a Woodstock. (Thomas Oliver was born in Woodstock, Ontario, and his typewriters were mostly manufactured in Woodstock, Illinois). 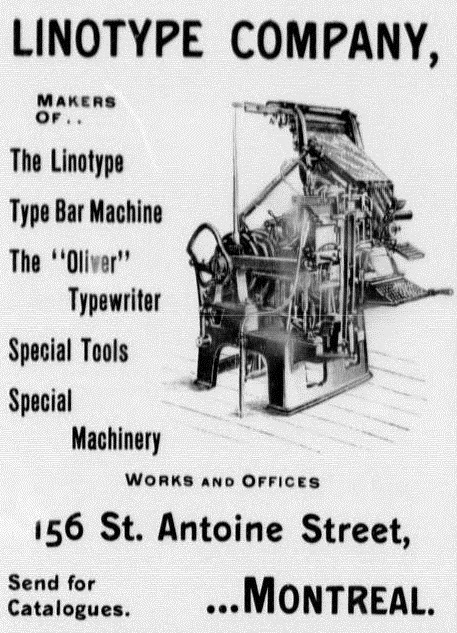 1898 advert
In May 1899, Dougall's Linotype Company also got involved in the "Battle of Detroit". A booklet containing "An Impartial Account of the Fierce War Waged in the Board of Education by the [Union] Typewriter Trust against the Oliver Typewriter, in the year 1899" was published by the Linotype Company of St Antoine Street. Perhaps, as the booklet was not published by Oliver itself, it may have been seen to be "impartial". However, it did include this fascinating passage: "This machine, the only typewriter outside the trust, having a free type bar, is the invention of Thomas Oliver, a Canadian, whose machine has been built in Woodstock, Illinois, for several years, the head office being in Chicago, and which is now being built by the Linotype Company, Montreal, for Canada and South America. This machine the Trust could not afford to buy on account of the revolutionary character of its construction, which would render all its present immense plant and most of its stock useless, and besides it is in the hands of a close corporation composed of wealthy business men, who understand just what they have got, and intend to hold it. Direct purchase being impossible, the trust’s only alternative was to resort to vilification and threats of patent infringements. This was the machine which entered the list against the trust machines at Detroit, and on January 10, 1899, the typewriter Waterloo was fought and won." 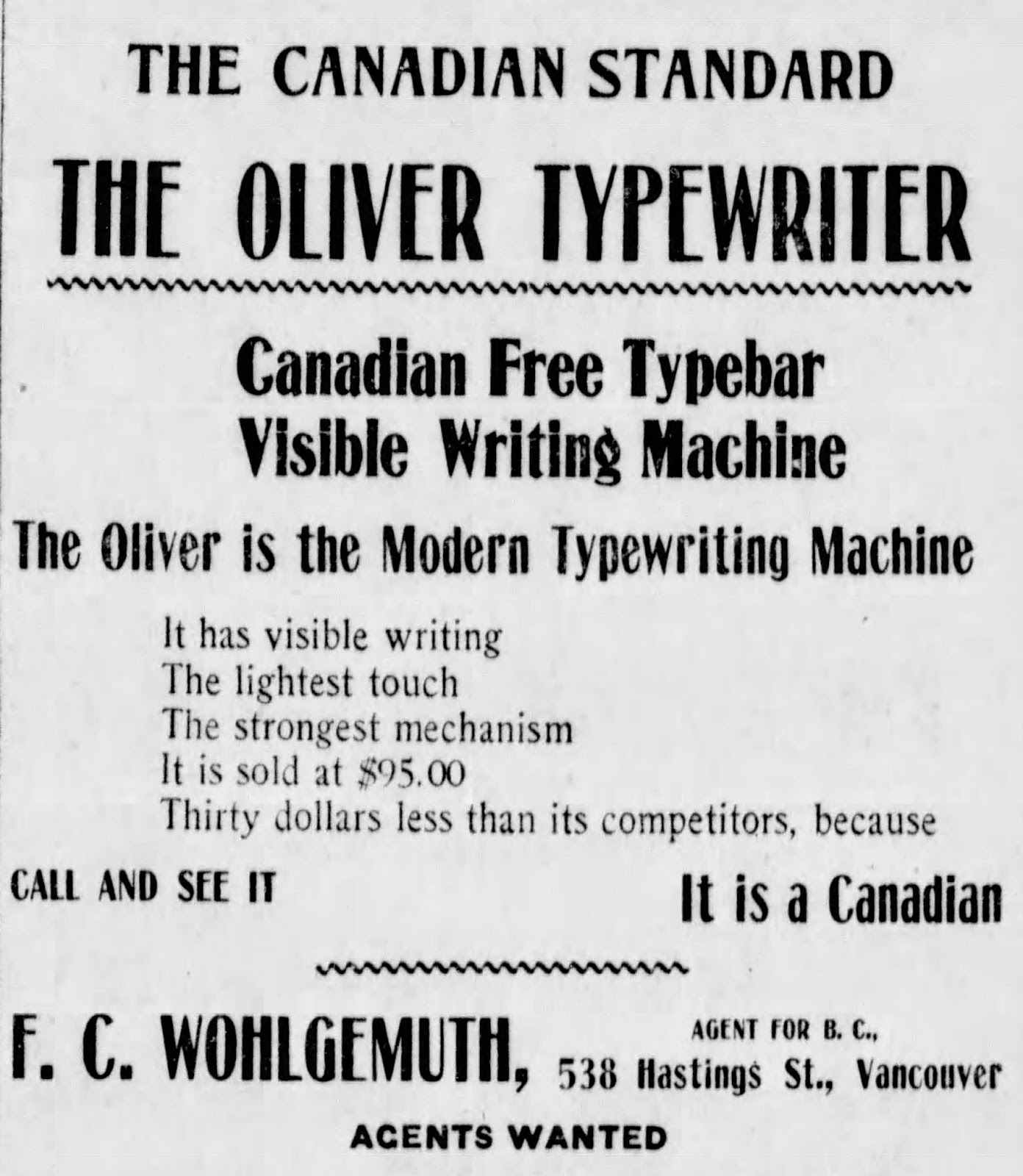 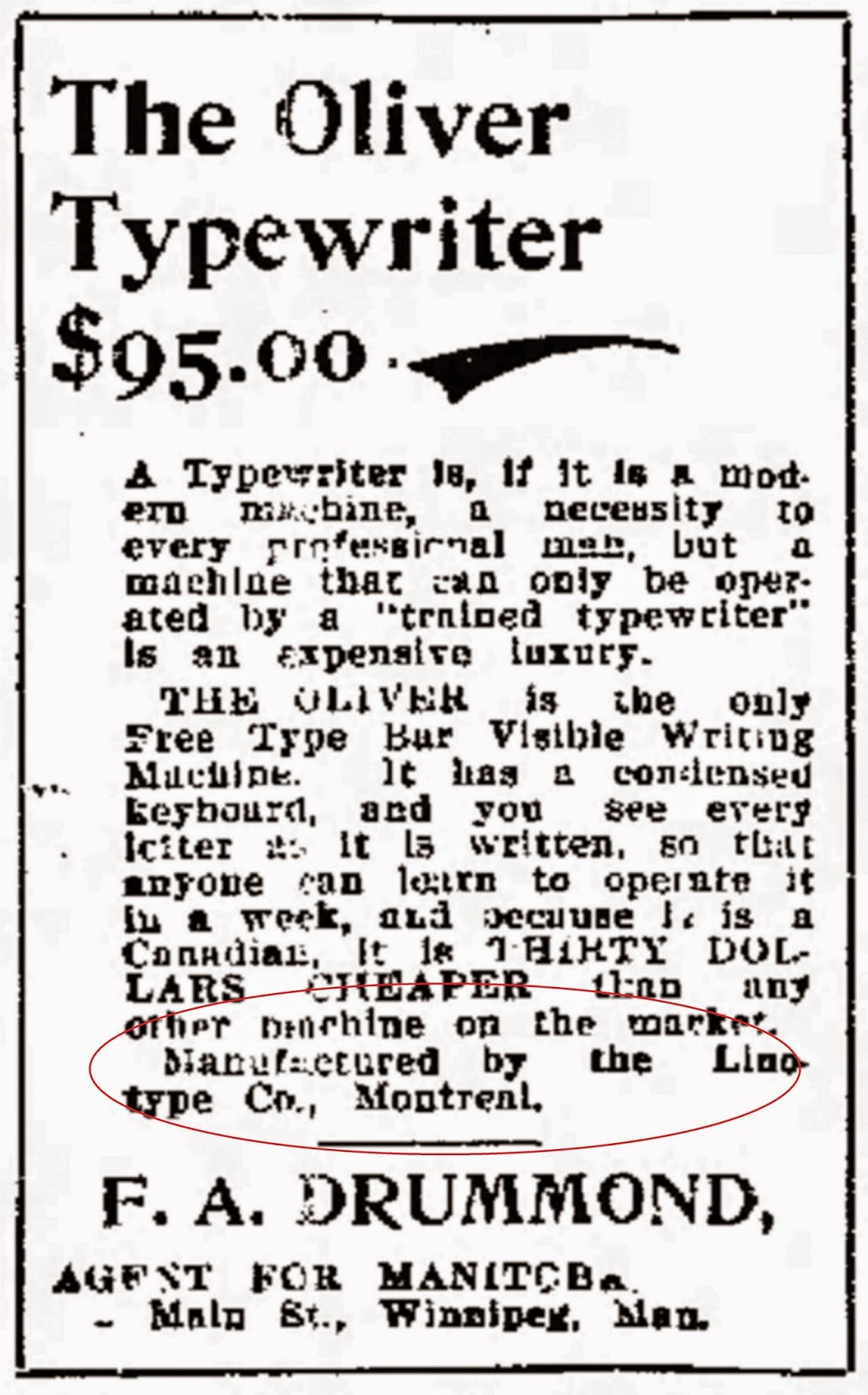 Above and below, 1900 adverts. Note the dig in the ad below at the "Typewriter Trust". 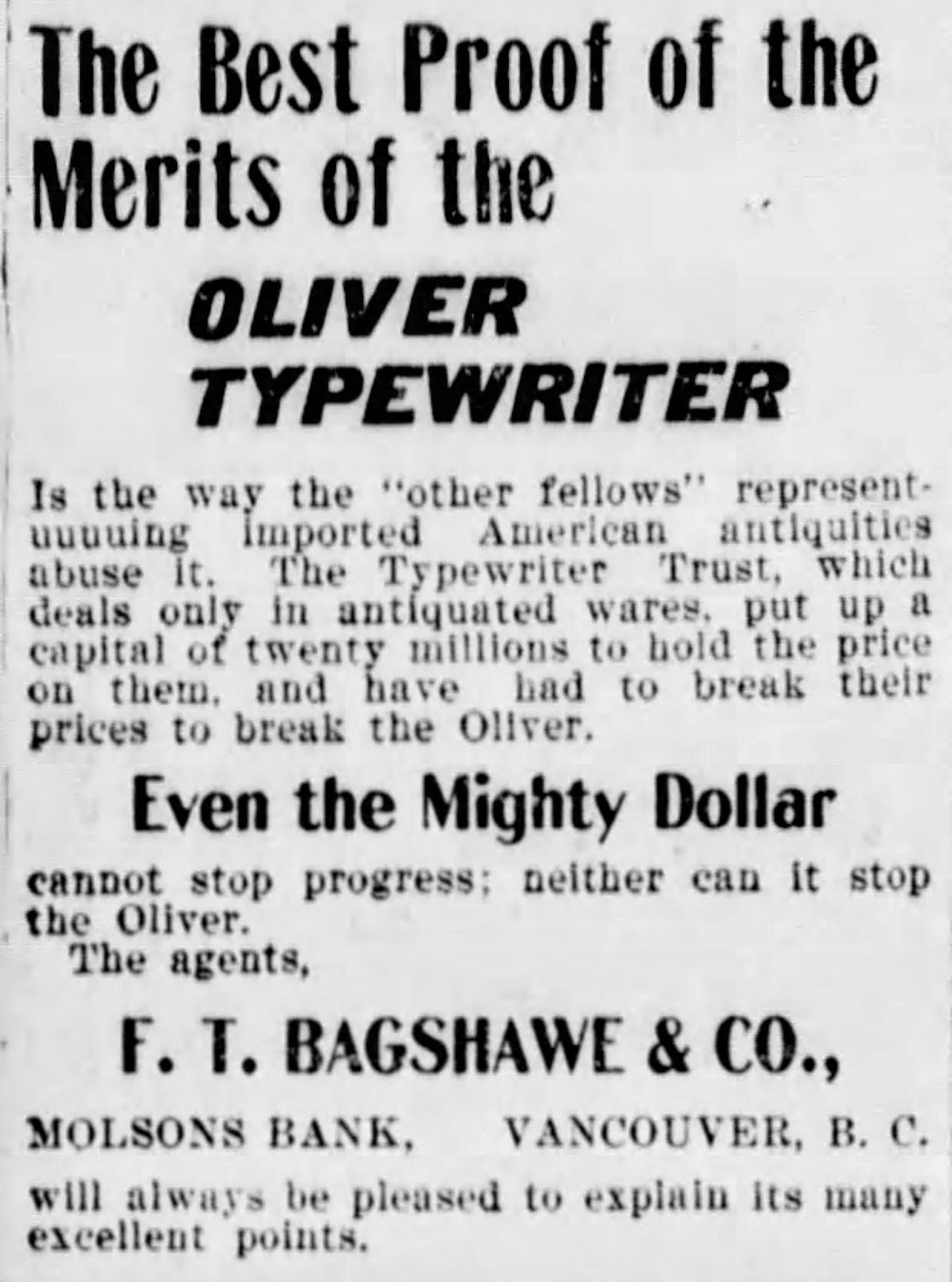 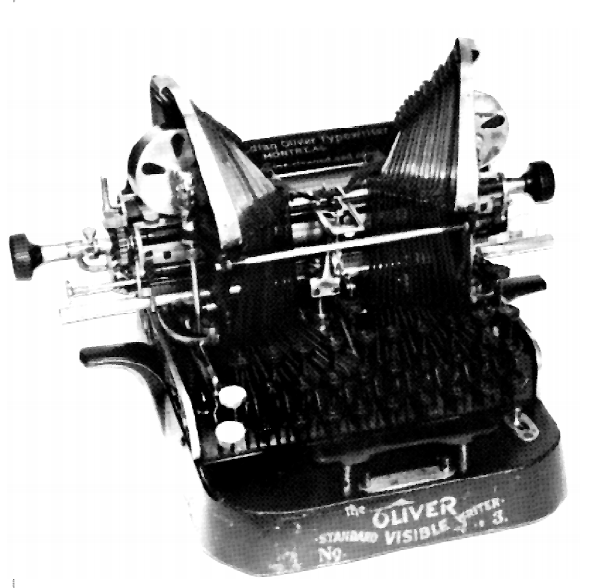 This image of a Canadian-made Oliver, serial number 1946, with vertically mounted ribbon spools, appeared on the front page of ETCetera No 4 in July 1988 (PDF here). It was at that time owned by Don Decker. Under the spare bar is a Canadian patent number and the words "by Linotype Company, Montreal". On the paper plate are the words "Canadian Oliver Typewriter Montreal". It has black keytops. 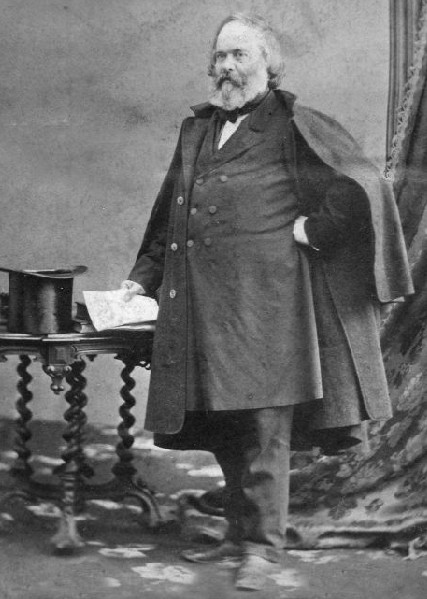 John Dougall senior
By 1901, Canadian Olivers were being described as the "only serious competition for US-made typewriters". They were promoted as being made from Canadian material by Canadian workmen, and as saving on duty.
Dougall was the son of Scottish-born merchant, journalist and publisher John Dougall (1808-1886), who in 1846 established the weekly the Montreal Witness. In 1871 the father left the Witness in the charge of his son and with support and capital from Manhattan residents moved to New York City, where he established the Daily Witness and the widely circulated New York Weekly Witness. 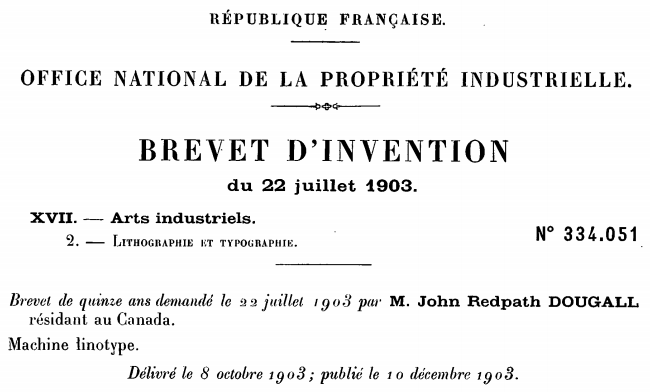 In 1903 John Redpath Dougall patented an improved Linotype machine, but under immense pressure from the Mergenthaler company's plans for international domination, he sold his Linotype Company to the Toronto Type Foundry in 1904. Upon doing this, Dougall reorganised his Montreal company as the Canadian Oliver Typewriter Company. 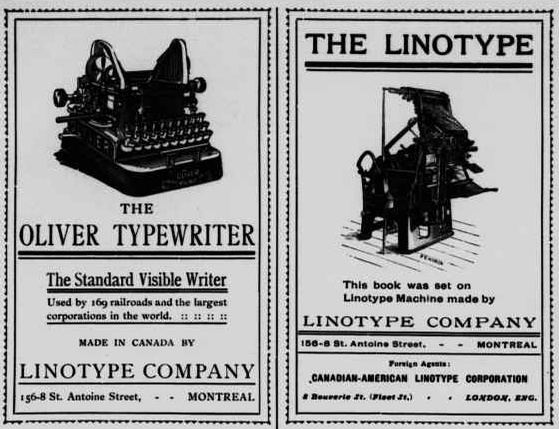 1903 advert. Note the vertically mounted ribbon spools.
The Toronto Type Foundry's Linotype wing lasted only five years, until May 1909, when it was taken over by Mergenthaler as part of a $2.87 million worldwide expansion which valued the Toronto asset at $590,391. Mergenthaler also engulfed the Linotype and Machinery Company of Britain and Setzmaschinen-Fabrik of Germany. Mergenthaler claimed the takeovers were forced on it to "avoid litigation, consolidate patents and develop and improve the machine". Its own basic patents expired in September 1907 and it had failed to gain "territorial agreements" in Canada, Britain and Germany.
Mergenthaler's aggressive policies in trying to push into the Canadian market, through the Vancouver Daily Province newspaper, led to court action from the Toronto Type Foundry, in which the Ontario company claimed infringement of Dougall's patents and was represented by Dougall himself, in his capacity as a QC. Dougall's improved machine was said to be simpler and faster than the Mergenthaler, and cost half the price (at $1200 less). 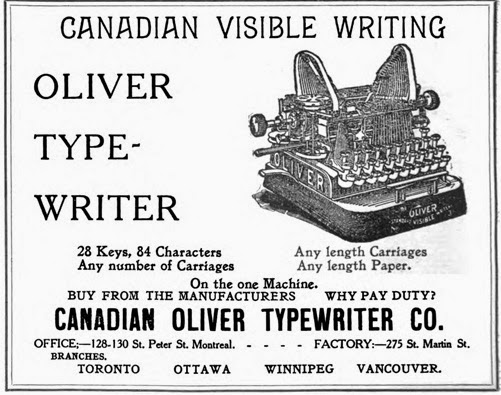 After the death of Thomas Oliver in 1909, however, production of Canadian Olivers ended.

By 1912, the Canadian Oliver Typewriter Company's operations were entirely concentrated on nickel plating and polishing: 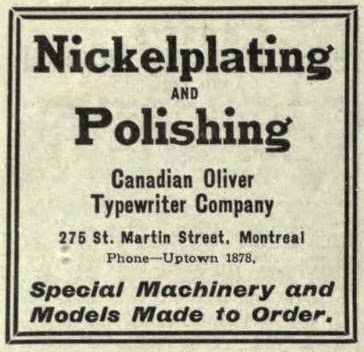 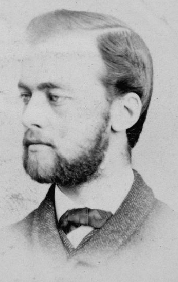 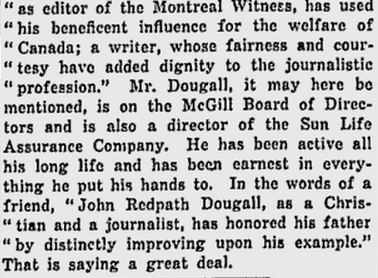 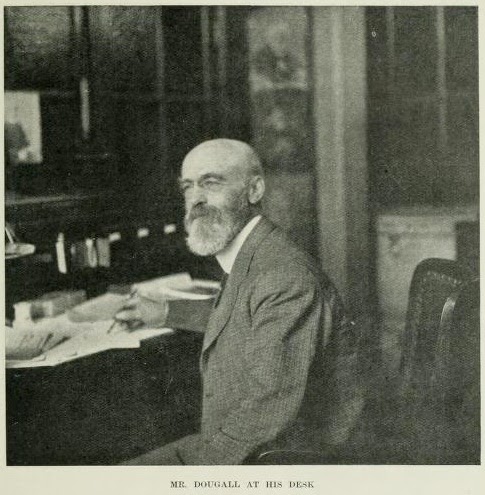 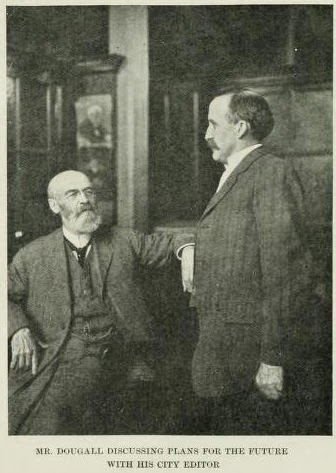 Posted by Robert Messenger at 11:29

Very interesting! Who knew. Thanks for posting.

In the "Reading as you Write..." graphic, the text contains the claim "will write in any color without changing the ribbon" - what could that possibly mean? There were only a few ribbon colors made, and at most two to a ribbon.

Thank you Tina.
Cuyler, I suspect that by "any" they probably mean "both". But it seems to me misleading advertising.