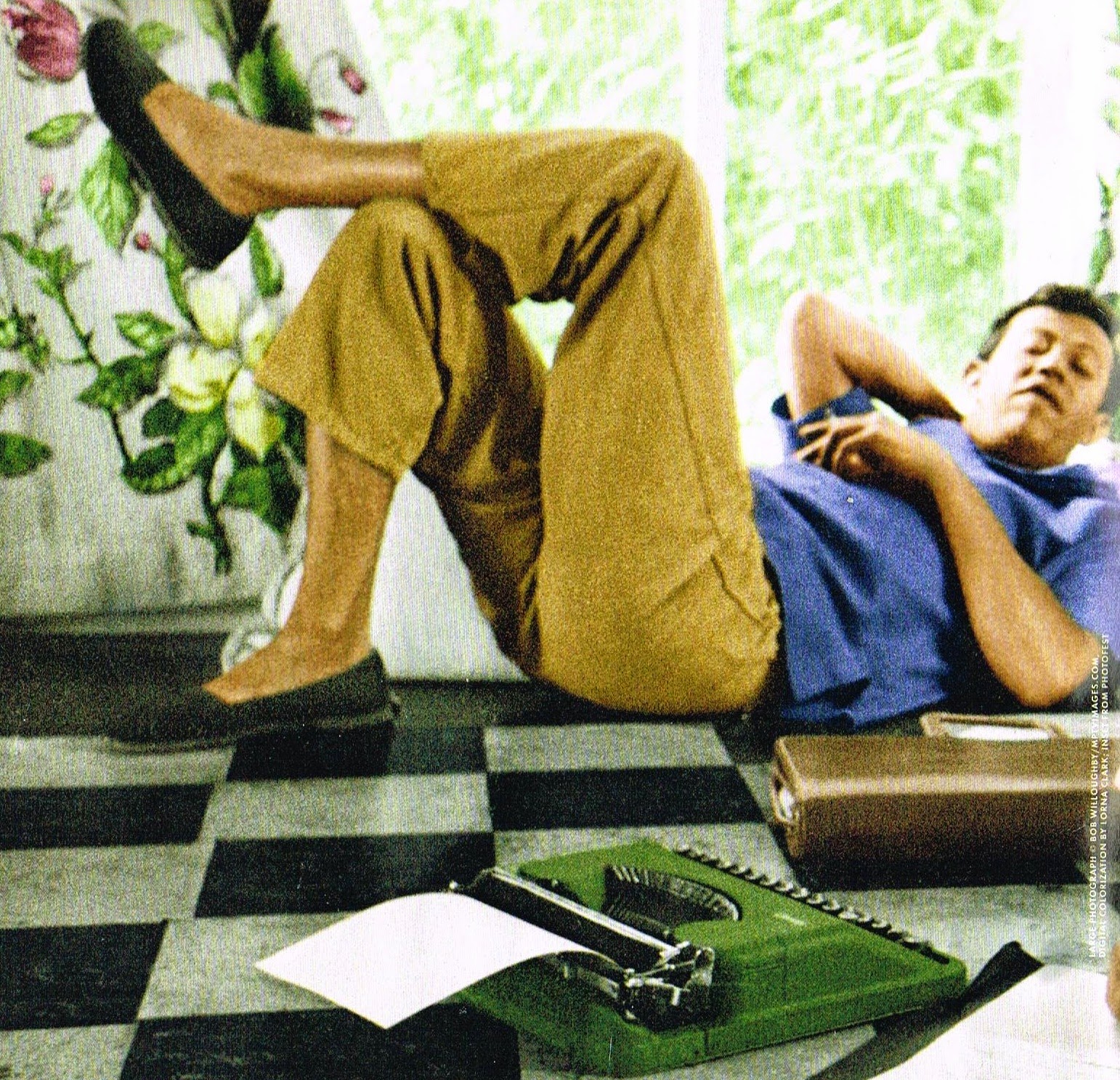 The latest edition of Vanity Fair to reach the magazine stands (in Australia at least) marks a welcome return to images of typewriters in this esteemed journal - and such images appear in relative abundance. I had waited impatiently for some time for typewriters to return in the monthly, and perhaps the November edition reflects some sort of a "catch-up". Well, it won me back. While enduring the barren period, I had felt disappointed in editor Graydon Carter, for his apparent failure to insist that each issue must contain a minimum of one or two typewriter images. After all, his own name appears under a typewriter on the masthead:

Previously, Vanity Fair had proved not just a fairly rich source of typewriter-and-writer images, but also in small but significant ways had contributed to our knowledge of typewriter history (Hemingway's Corona 3, as one example). One notable black spot was a set-up photograph to illustrate a story about screenwriters in Hollywood in its heyday - a plastic East German-made Robotron was used as the prop. Ugh!!! 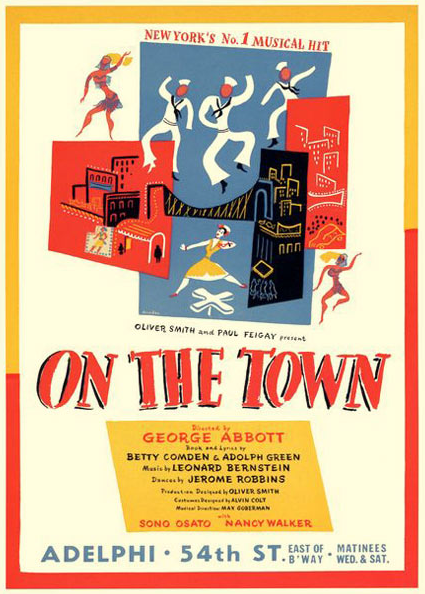 Front and centre (well, almost; OK, slightly to the left of centre) of a double-page colour image used in this latest Vanity Fair, to introduce a feature ("Innocents on Broadway") on the 1944 musical On The Town, is a deep green Hermes Baby portable typewriter. 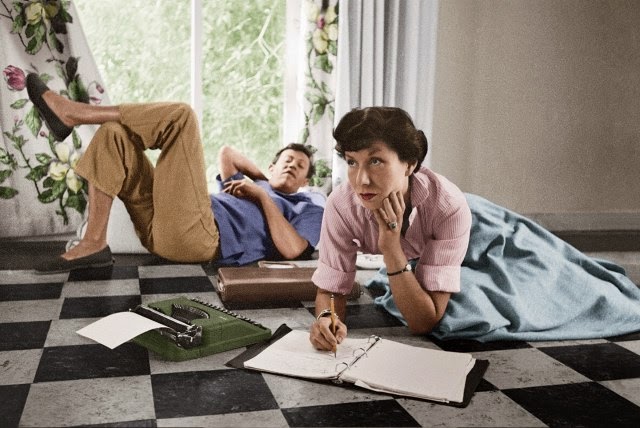 Yes, folks, this most definitely started out in life as a black-and-white photograph, one taken by Californian Bob Willoughby, "the man who virtually invented the photojournalistic motion picture still". Strictly speaking, the image doesn't relate directly to On The Town, but was taken 10 years after that musical's launch on Broadway. Willoughby snapped the shot in 1954 in Los Angeles, while Adolph Green and Betty Comden were working on Peter Pan. Rights to the Willoughby photos are now owned by MPTV, as can be gleaned from the watermarks on the original prints: 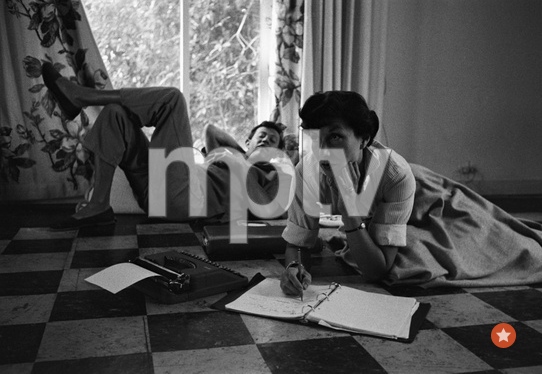 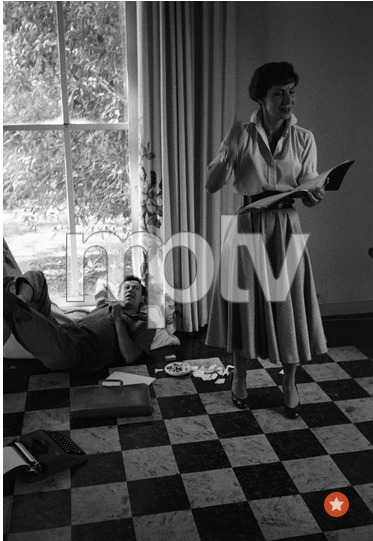 Quite why Vanity Fair felt the need to run a colourised version I cannot say. However, the magazine does give credit to the colourisation process to one Lorna Clark - albeit in tiny 2-point type, alongside acknowledgement of Willoughby and MPTV.
Now, let me be the first to admit that I believe the colourisation of old black-and-white photos, and film, is a fine skill, a process which can produce some interesting results. There is clearly a risk involved, however, in getting the colours right. My strong feeling is that Ms Clark didn't get the Hermes Baby right. My guess would be that the portable typewriter sitting on the floor of the LA home of Green and Comden in 1954 was grey. But, it seems, the floor tiles are black and grey, so ...
There is another colourisation of a photo of Comden at a typewriter - this time a Royal portable - further into the Vanity Fair feature article. This time, the 1944 shot shows Comden sitting on the floor typing beside choreographer Jerome Robbins, with On The Town composer Leonard Bernstein and Green on a couch in the background: 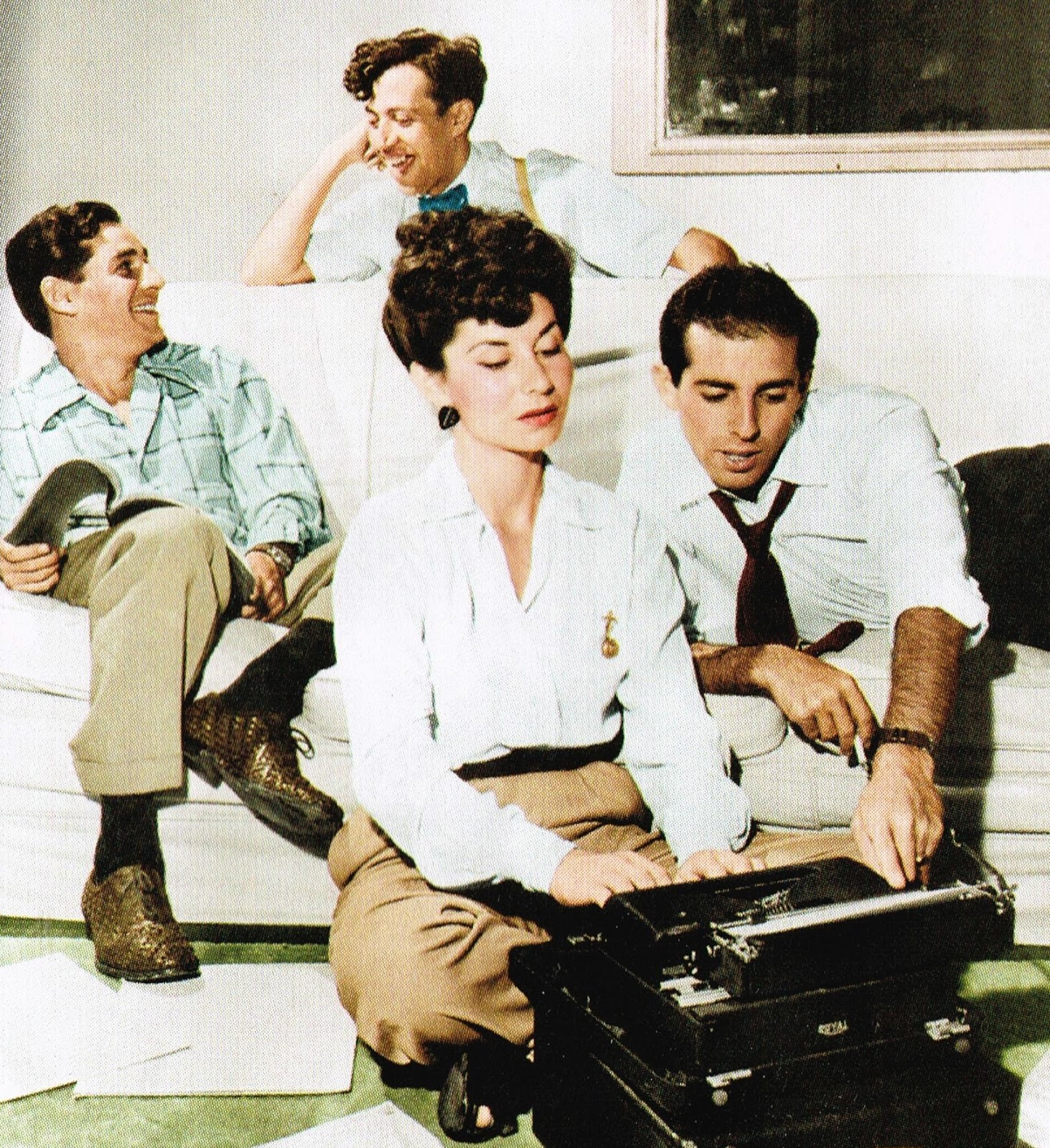 Here is the original black-and-white image: 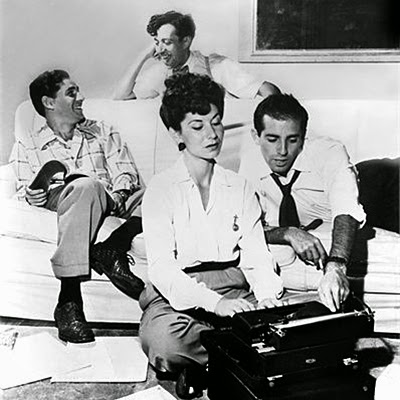 OK, so I'm a Luddite stuck in the Dark Ages, but I do happen to prefer my typewriter-related images to be published as originally processed, be it black-and-white, sepia-coloured (I do like sepia) or whatever. Art for art's sake and all that. 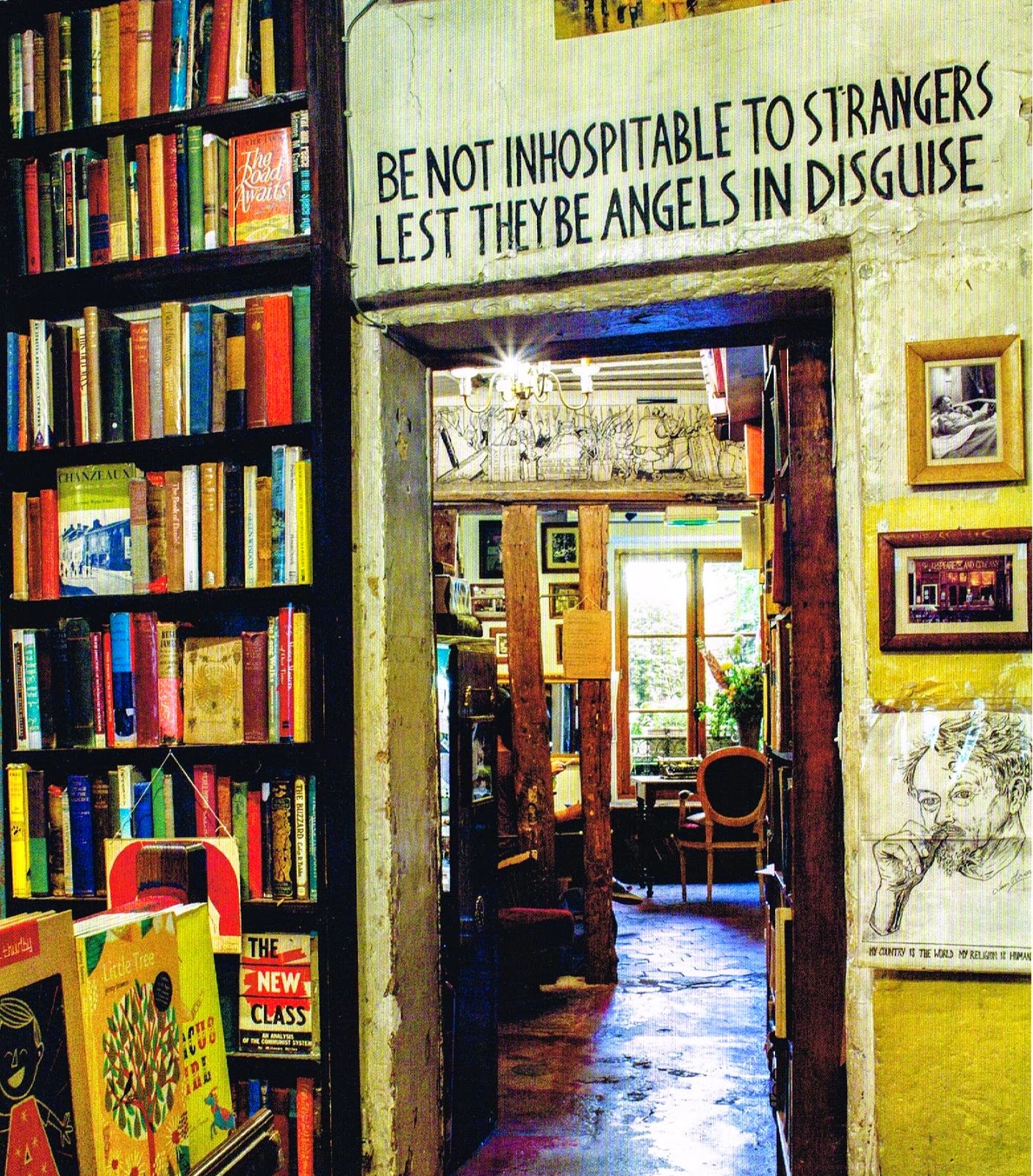 As for other typewriter images in this particular edition of Vanity Fair, they are contained in a feature ("In a Bookstore in Paris") about the Shakespeare and Company's George Whitman and his daughter Sylvia. George Whitman (seen below, 1913-2011) "took up Sylvia Beach's mantle" by opening this present-day store in 1951. 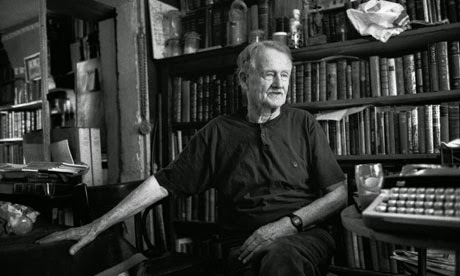 Sylvia Beach Whitman (1981-) continues to run the store. In it remains at least one portable typewriter, an Olympia SM3 without its ribbon spools cover. 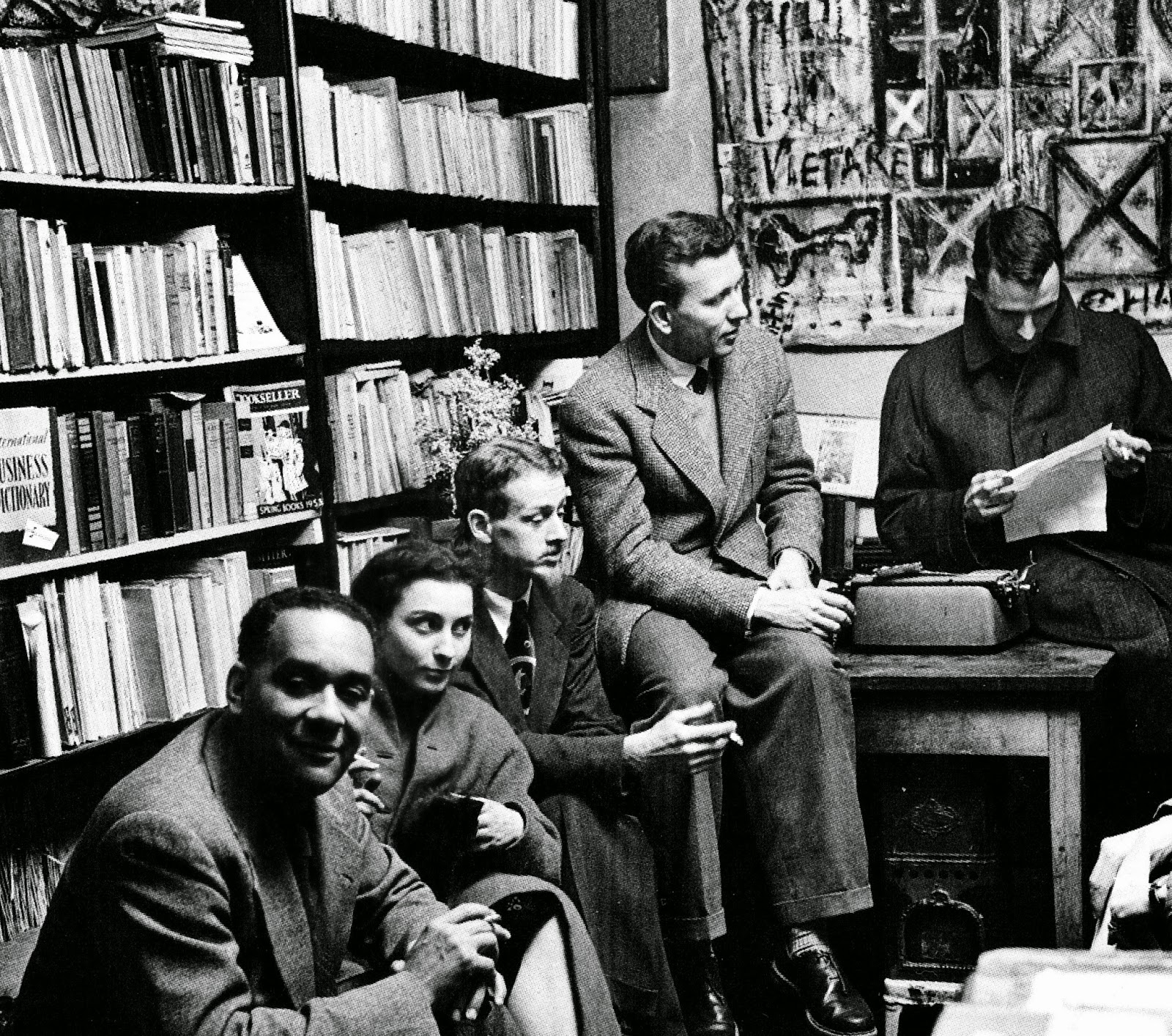 Happily, Vanity Fair includes in this feature a black-and-white image of writers at the store, taken in the 1950s, in uncolourised form. It shows Richard Wright, his wife Ellen, George Whitman and American authors Max Steele and Peter Matthiessen, with what appears to be an Olivetti Studio 44 on a desk, between Steele and Matthiessen. 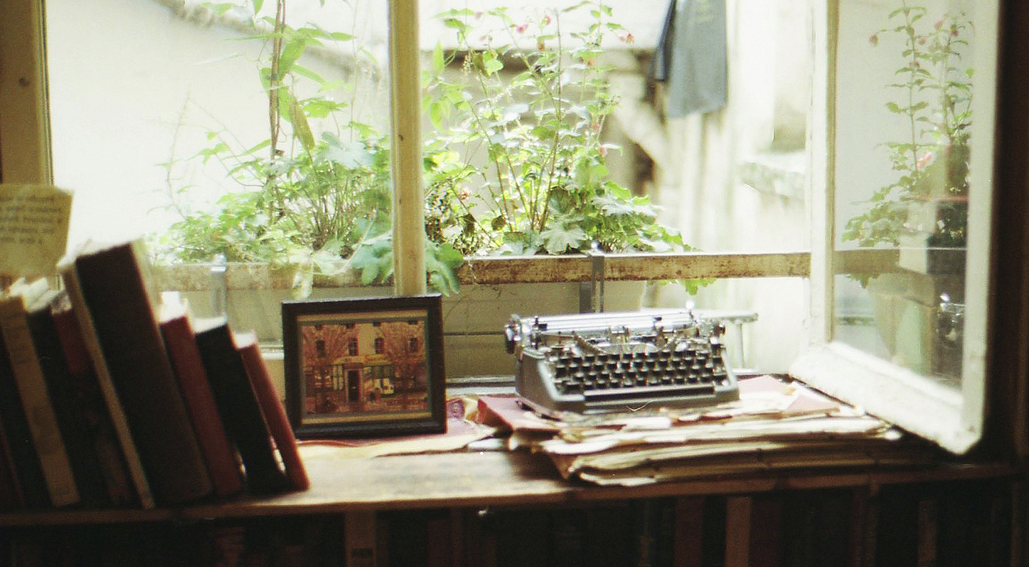 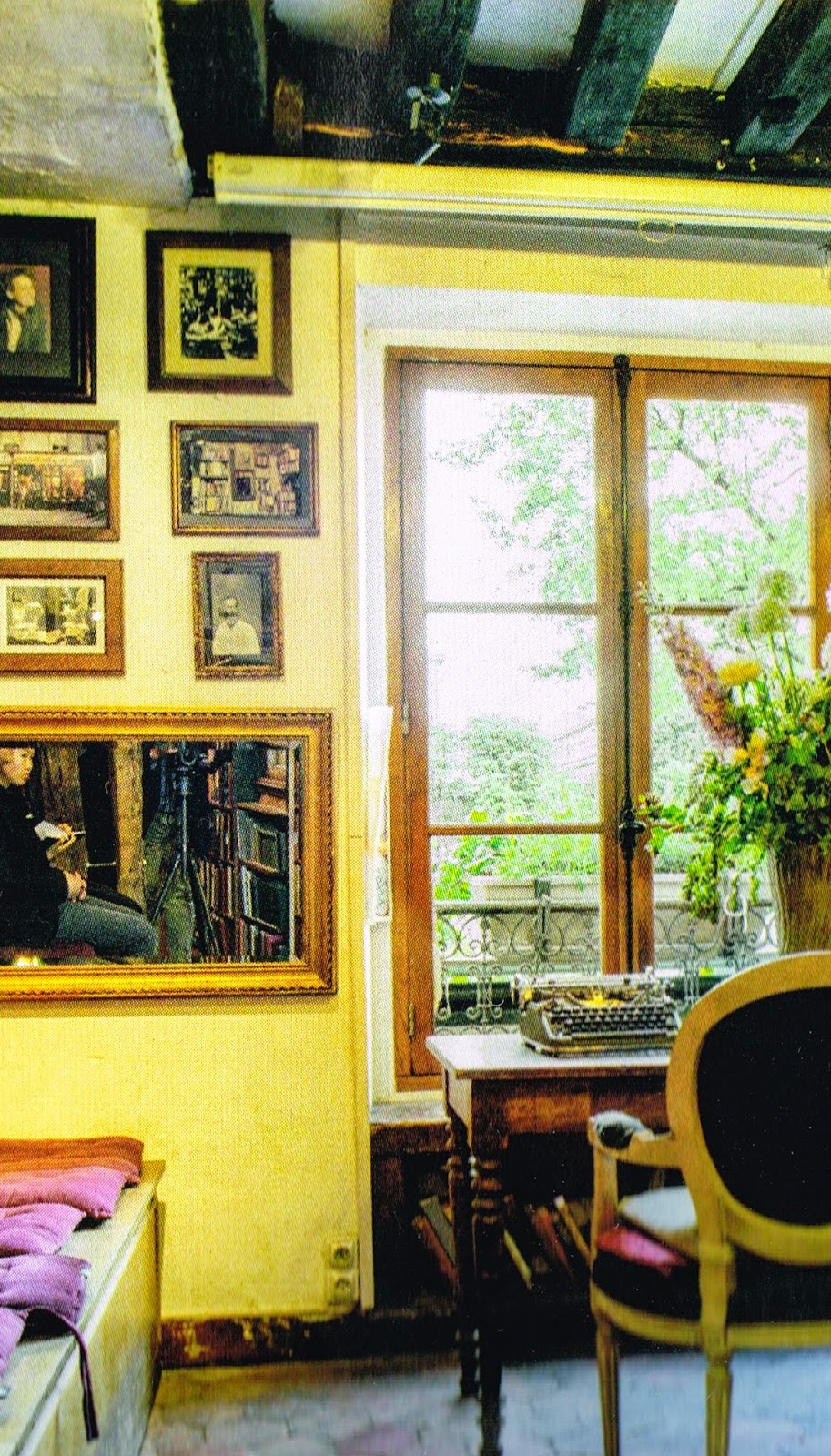 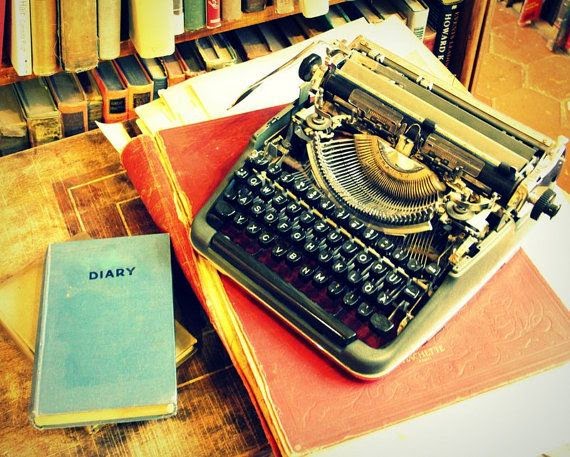 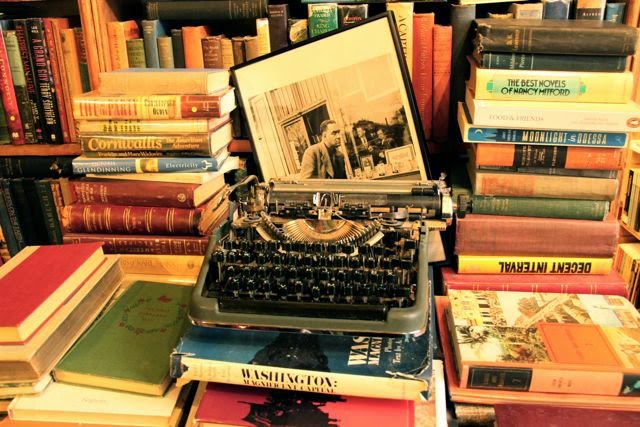 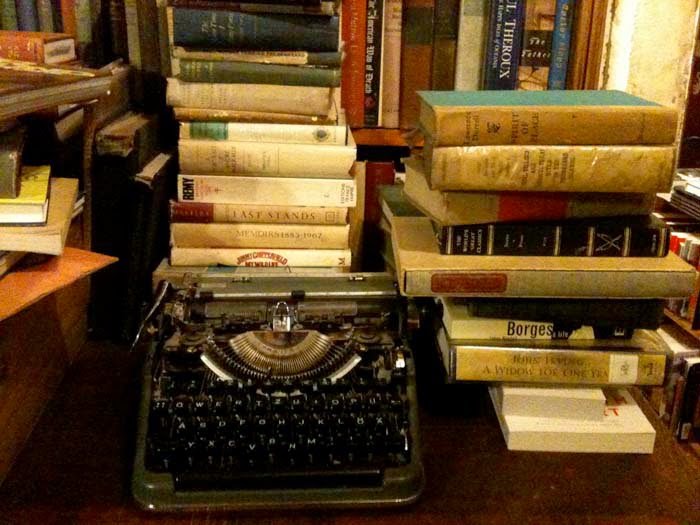 Note: Only three of the typewriter-related images from the Shakespeare and Company bookstore, shown above, appear in November's Vanity Fair.
Posted by Robert Messenger at 12:16

Always good to see some typewriters in the media.

That poor Olympia at Shakespeare & Co. needs a ribbon!