The Beautiful and The Damned: Gold-Panelled Corona 4 Portable Typewriter 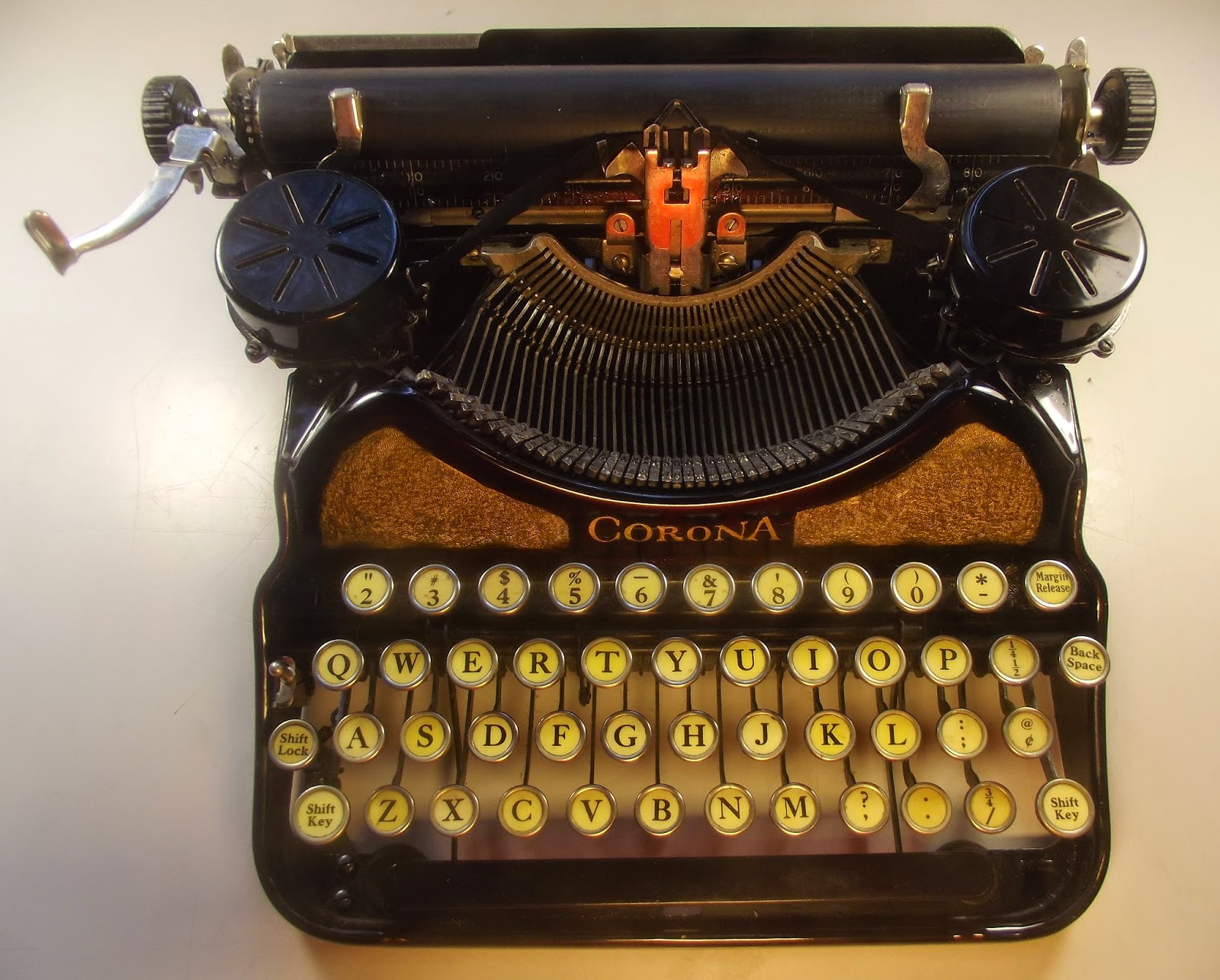 The Norma Desmond of Typewriters,
once glittering, now fading
"You used to be big."
"I am big. It's the drawband that got small."
"They took the idols and smashed them, the Underwoods, the Royals, the Valentines!
And who've we got now? Some nobodies!"
"There once was a time in this business when I had the eyes of the whole world!"
"No-one ever leaves a star. That's what makes one a star."
"The stars are ageless, aren't they?"
"We don't need two typewriters, we have a typewriter.
Not one of those cheap new things made of plastic and spit, a Corona 4."
This gold-panelled Corona 4 portable typewriter, serial number V1A08642 (1929), is a flawed beauty which has had one foot in the grave for the entire decade I have owned it. Many times in those 10 years have I taken it out to remind myself of why I can't use it, and each time I have literally stumbled upon the complexity of the drawband arrangement. In the past, it has even crossed my mind to use it as a spare parts machine. But I just couldn't bring myself to do that. 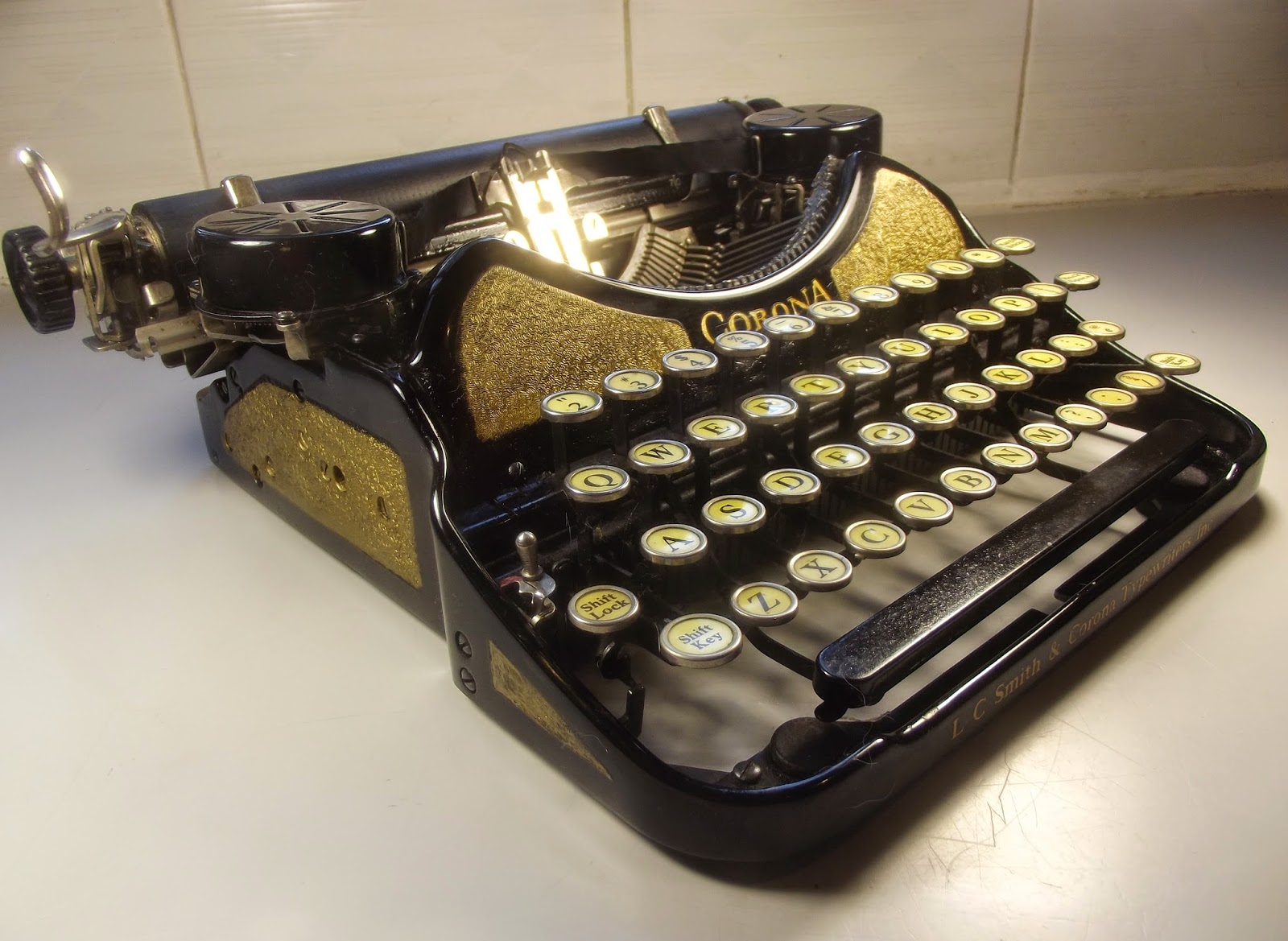 The other day I was looking at my red Corona 4, the blue one with gold panelling, and this one, trying to decide which of the three I will definitely keep (it's the red one, I know). Yet again, as I weighed up the black model, I looked at the mainspring and thought, "I should be able to fix this. Why haven't I fixed it already?" It's called selective memory. Deep down, I knew the answer. I was just being blind to defeat, refusing to accept the awful truth. Behind my thoughts was a long-standing and overwhelming reluctance to pass on this machine. But yet again, after two days of effort, I have given up on it. 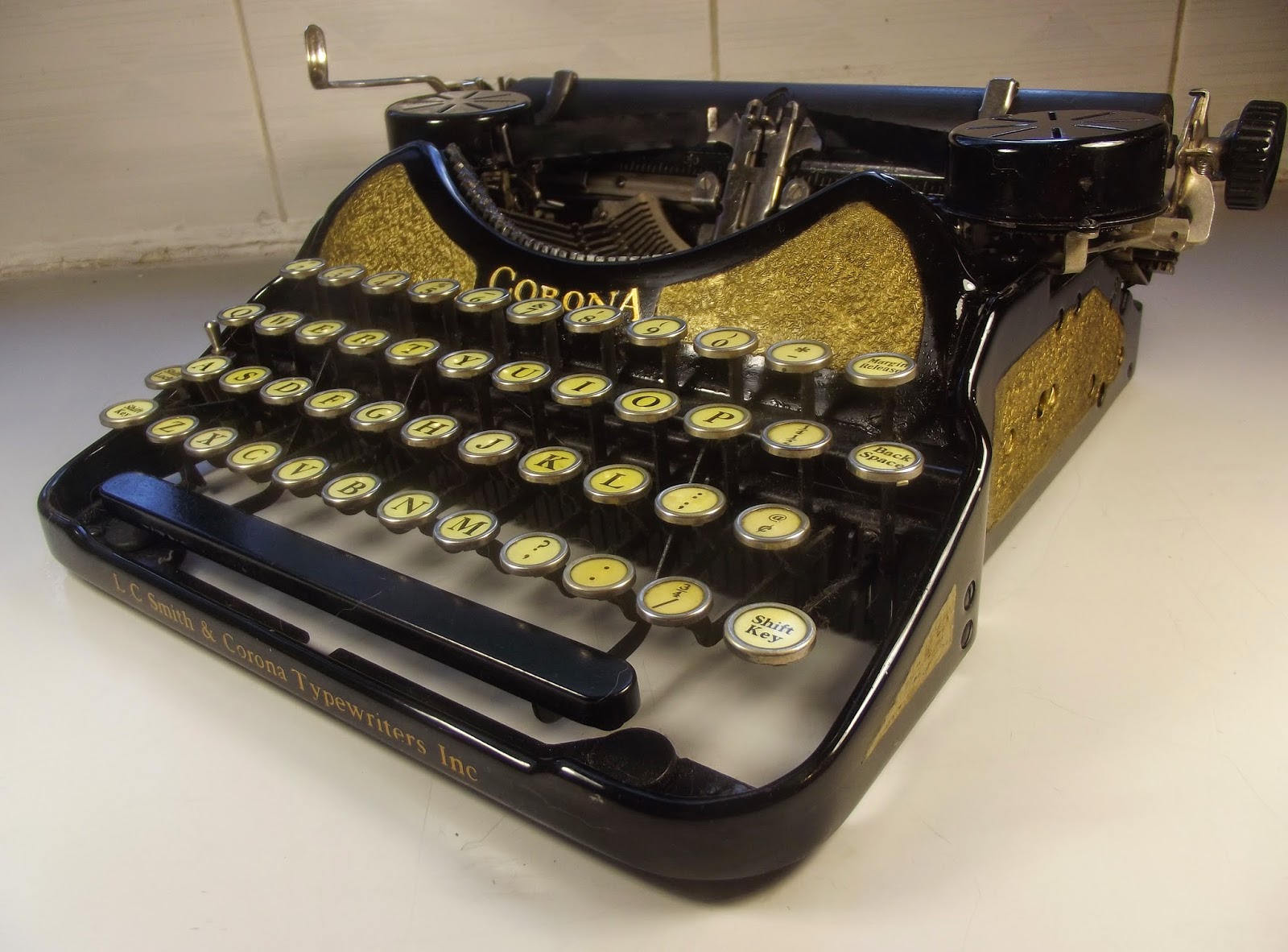 For all that, I was determined to feel and see it typing, if only just the once. So I jury rigged an arrangement with the drawband across the back, attaching it to the margin setter, which I pushed to the far right, just so I could at least type some short lines. Getting a few words out of it only made me feel all the more sad and frustrated, that I had failed for the umpteenth time to turn this beauty back into a fully functioning machine. Damn! And damn again ... I do love you, Norma Desmond, I just can't live with you anymore. 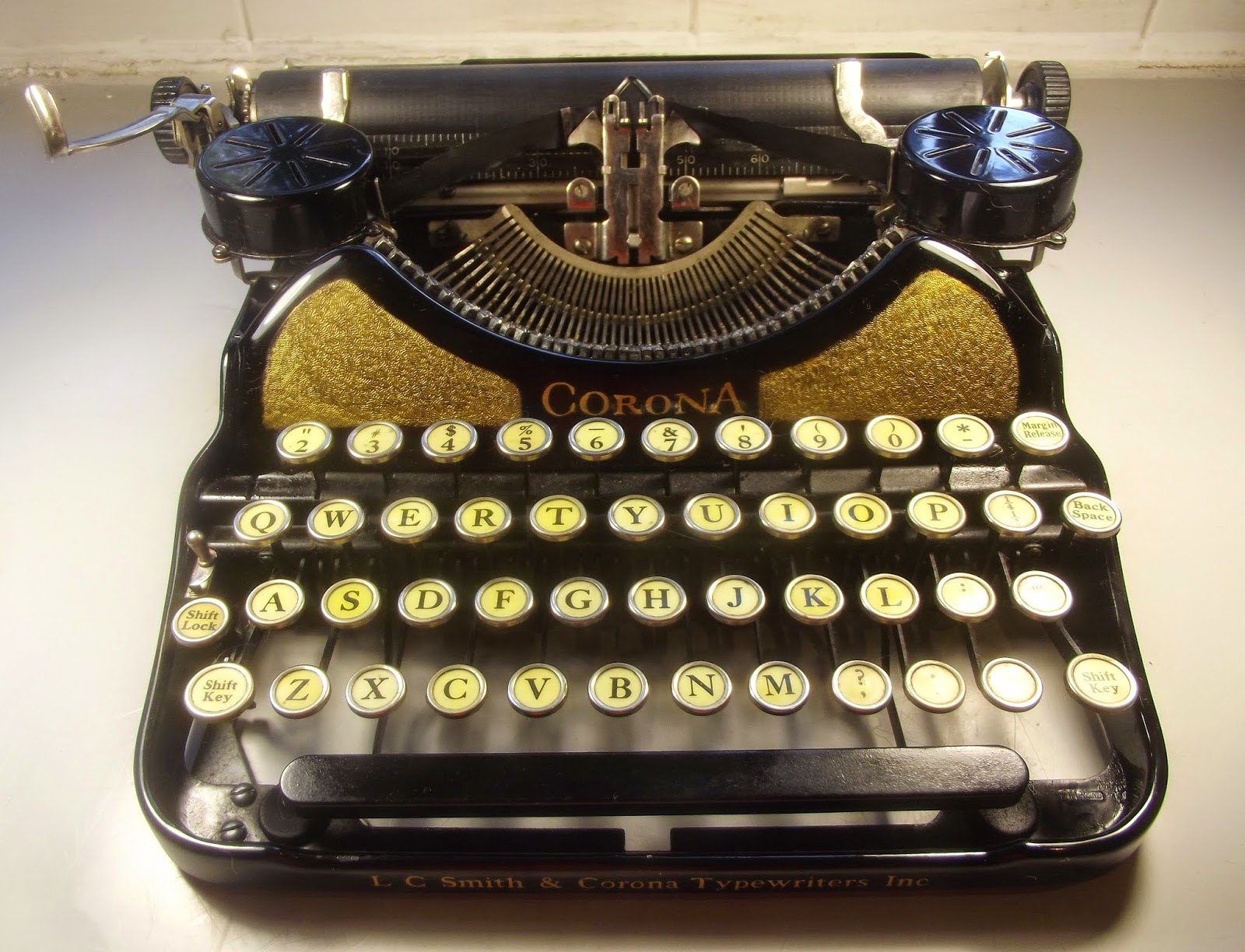 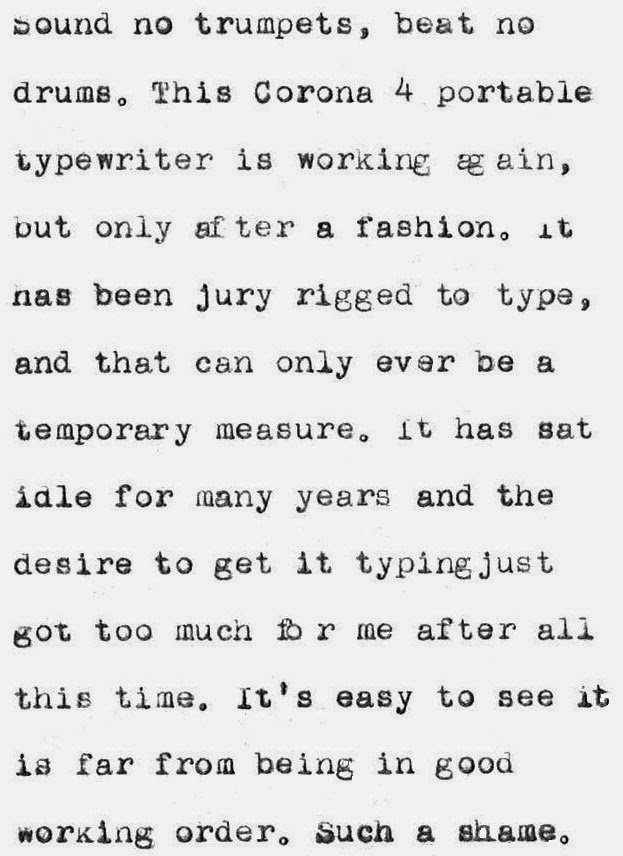 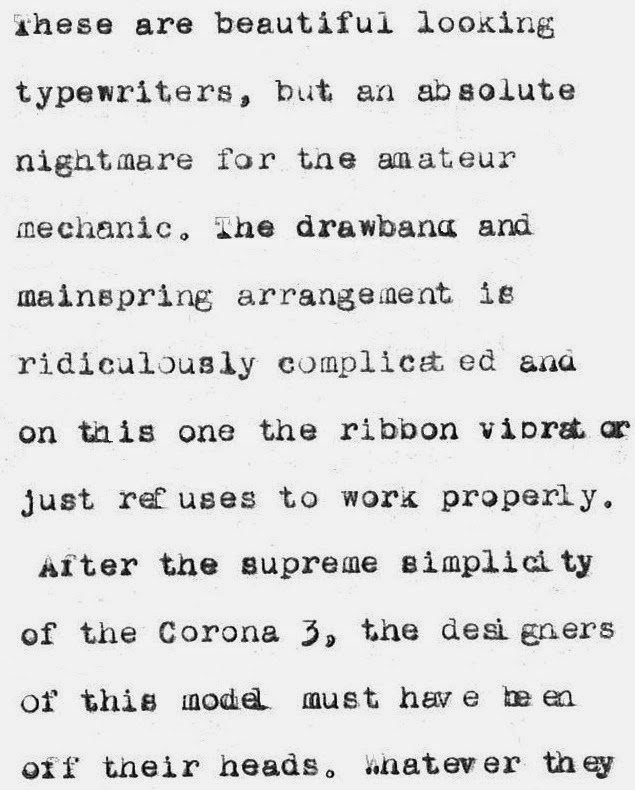 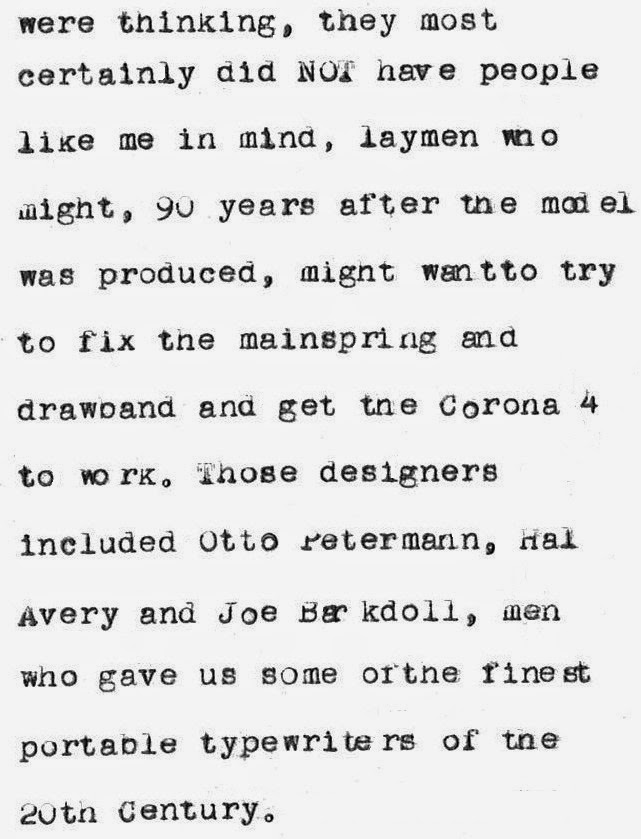 Posted by Robert Messenger at 08:48

I feel your dispair of not being able to get such a nice machine working.

Oh yeah, an unfixable beauty like that can haunt you for years. Best kiss it goodby and try to find someone who's just satisfied with putting on a shelf and looking at it, cuz that's not you. :D