The Slocum Typewriter: A Dream Shattered When Phebe Slocum Did a Bolt 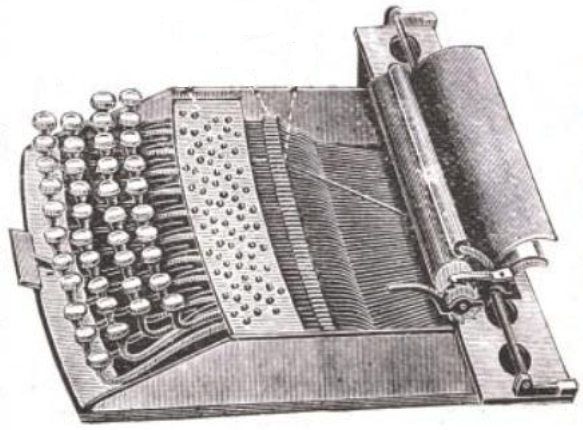 An article headed “A Brief History of the Invention of the Type-Writer”, published in the New Orleans Daily Picayune on Monday, July 26, 1886, listed writing-machines said to have been on the market at that time. Aside from the Remington, these included the People’s, the Sun, the Columbia, the Hall, the Crandall, the Hammond, the Caligraph, the McLoughlin, the Ingersoll, the Chicago and the Pocket. But there was also one listed of which I wasn’t previously aware, the Slocum. 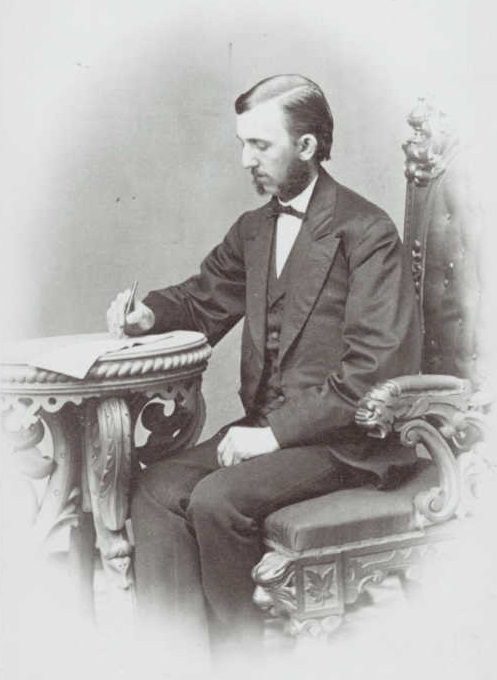 William Henry Slocum
A quick check led me to a post from September 3, 2018, on Richard Polt’s The Typewriter Revolution blog. Among “Still more little-known typewriters (S)”, Richard included an image of the Slocum from Miners Specialities and dated sometime between 1886 and 1887. Richard wrote, “This ad for the formerly unheard-of Slocum typewriter was unearthed by Mike Brown several years ago and published in his book on the Williams typewriter. Even in this blurry photocopy, it looks very appealing.” Appealing, indeed, but unfortunately this wasn’t an ad - the Slocum never went into production and therefore never went on sale. 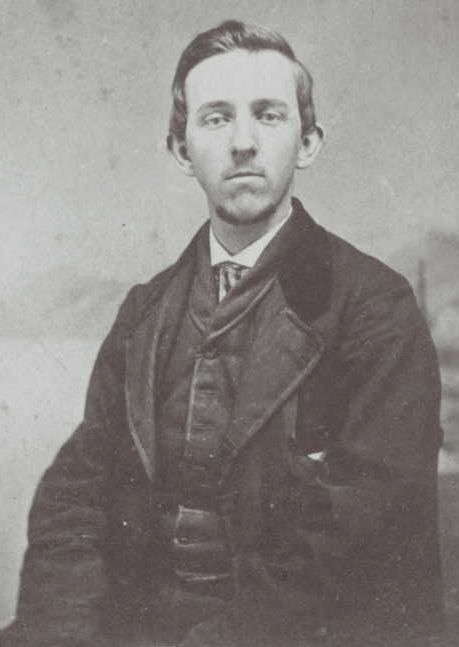 William Henry Slocum
Richard had reviewed Mike’s Williams book in ETCetera magazine in March 2006, saying, “The Phonographic Record reported that [John Newton] Williams also based his design in part of the Slocum typewriter. Mike could not confirm this, but he does show us an ad for this very obscure machine.” 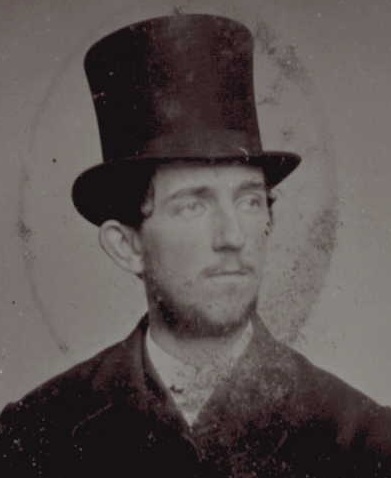 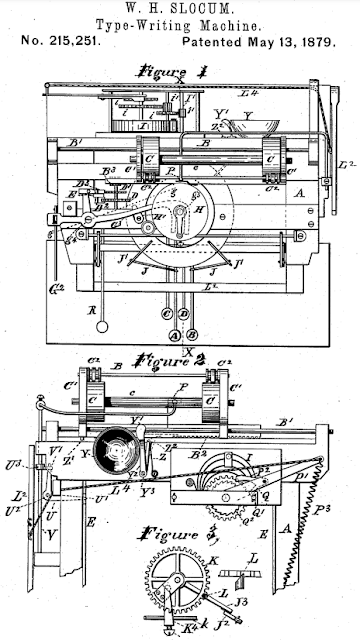 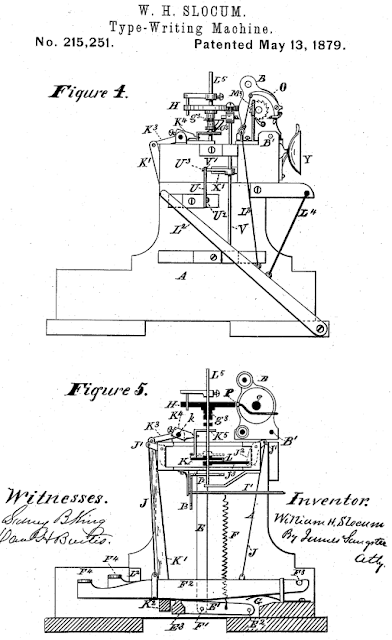 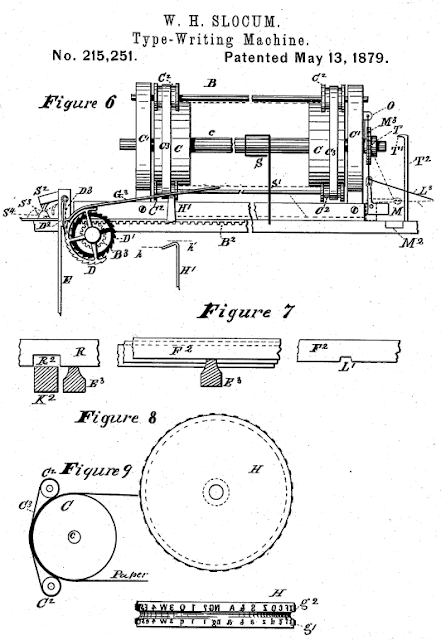 There were two typewriter patents granted to Slocum, a well-known Buffalo, New York, stenographer. The first, No 215251, was for a typewheel machine, applied for on November 28, 1878, and issued on May 13, 1879. The second, No 335,972, was applied for on May 5, 1885, and issued on February 9, 1886, and this machine was to have typebars. Had Slocum’s “improved type-writing machine” of 1879 been manufactured at that time, it would have been only the second typewriter on the market (that honour, as things turned out, when to the Caligraph, which emerged in 1881). 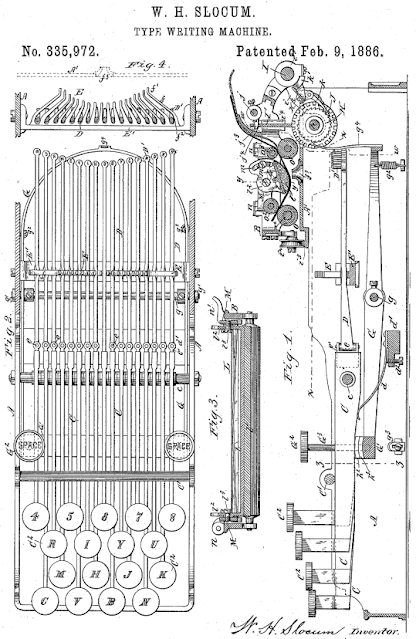 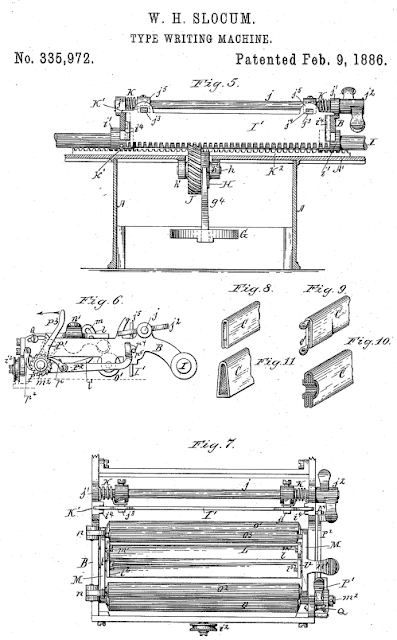 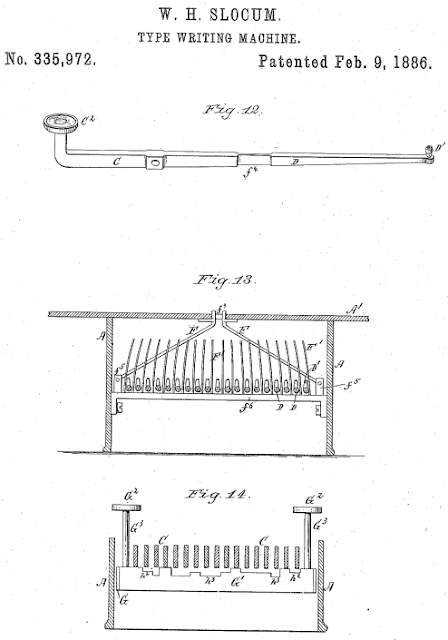 The image from Miners Specialities had first appeared in the Buffalo Sunday Morning Truth, with a lengthy description of Slocum’s envisaged typewriter, on February 28, 1886. The Phonographic World then published the engraving in its March 1886 edition – it had been sent to the journal by Slocum on January 22, 1886. Yet the patent office had received no model. 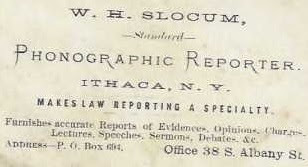 The engraving had been the subject of an exchange of letters between Slocum and The Phonographic World’s editor, Enoch Newton Miner (1854-1923). Miner had been asking for a fuller description of the projected Slocum machine, and Slocum had delayed supplying an engraving on the advice of his patent attorneys, who were afraid publishing the “cut” of the Slocum would prejudice the machine’s chances of getting a patent issued. 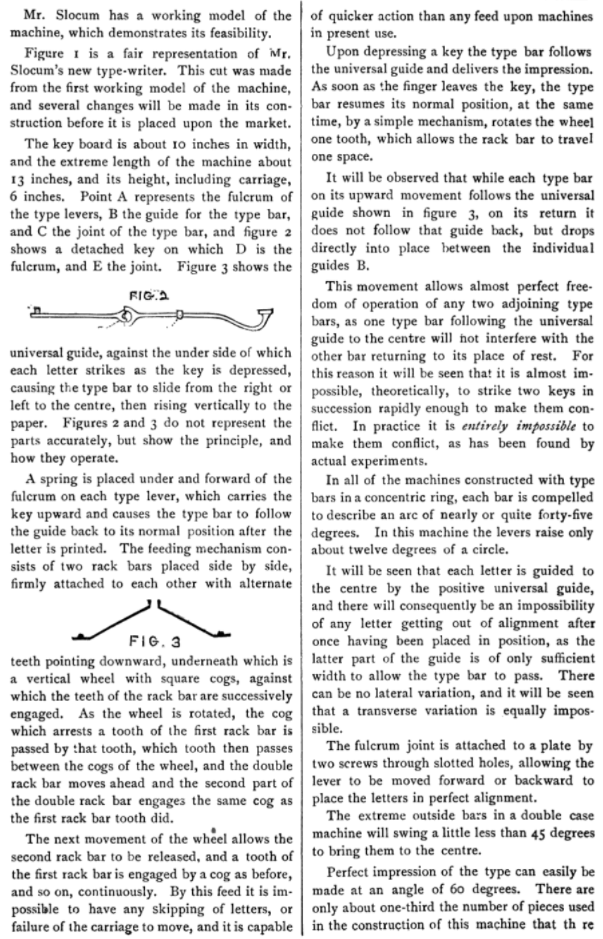 The Buffalo Sunday Morning Truth’s spread was picked up by the Toronto-based The Cosmopolitan Shorthander for its April 1886 edition. Both publications explained that Slocum had a working model but that “several changes” would be made in its construction “before it is placed upon the market”.

Little did Slocum realise it at the time, but the challenges he faced in getting his machine made were minor compared to marital traumas he would have to confront. His wife of 17 years, Lura Ann Slocum (née Fuller), died of tuberculosis on April 30, 1886, just as the typewriter seemed set for manufacture. Lura’s death left Slocum with a surviving seven-year-old daughter, Mabel. Slocum remarried on January 18, 1888, and then his troubles really began. In the meantime, of course, the typewriter enterprise was put on hold - permanently, as it transpired.

The correspondence between Slocum and The Phonographic World in late 1885, early 1886, concerns the machine patented in February 1886. Whatever Slocum had in mind in 1878, he had moved on to something very different by 1885. It’s interesting to note that in The American Shorthand Writer edition of January 1886, the journal mentions, “The Slocum typewriter, the invention of the well-known stenographer of Buffalo, Mr W.H. Slocum, is rather slow to come on the market, it having been announced as nearly ready long ago.” The italics are those of the magazine’s editor. The Shorthand Writer went on, “Mr S says that ‘the last difficulty is now overcome and the machine will be placed on the market at the very earliest day consistent with superior work.” Even in the absence of a model, the Shorthand Writer made the claim that “Typewriting experts have pronounced this a practicable machine, tolerably rapid and capable of doing excellent work.”

The January 1886 Phonographic World, under the headline “Silent Slocum”, had said, “We had fully intended this month to have given a full description of Mr Slocum’s machine, but, as will be seen from the following letter, we are unable to do so. We have before us, at the World office, a ‘one-key’ model of the machine, which was kindly left with us last week for examination, but from which we can furnish no distinct conception of its workings, and to publish a cut [engraving] of which would scarcely be doing justice to a proper appreciation of the machine itself. We have, as will be seen below, Mr Slocum’s promise for our February number, which we trust may be fulfilled. The machine has attracted considerable attention, especially among the practical stenographers of the East, and its description will be looked forward to with no little interest.”

The World went on to publish Slocum’s letter of December 11, 1885, describing “how beautifully [the machine] works”. “I certainly have got a machine capable of more rapid action than any other, up to the present date … It operates as easily as the Remington, which is certainly as easy as there is any object to have any typewriter operate.”. 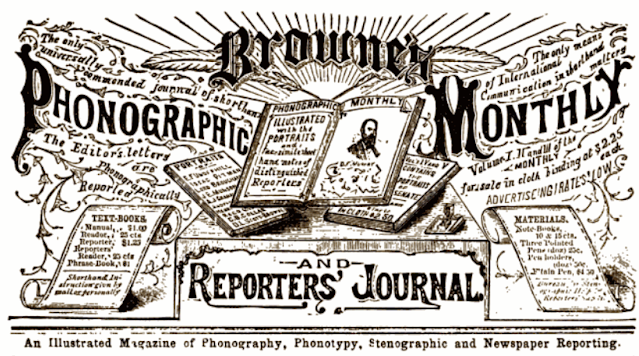 Even in the continued absence of the working model, the World in its May 1886 edition recorded a visit from “W.H. Slocum, official reporter of Buffalo, NY, and inventor of the ‘Slocum Typewriter’.” Browne’s Phonographic Monthly and Reporters’ Journal referred to the machine in its September 1886 edition as “Slocum’s Typewriter for the Future”. 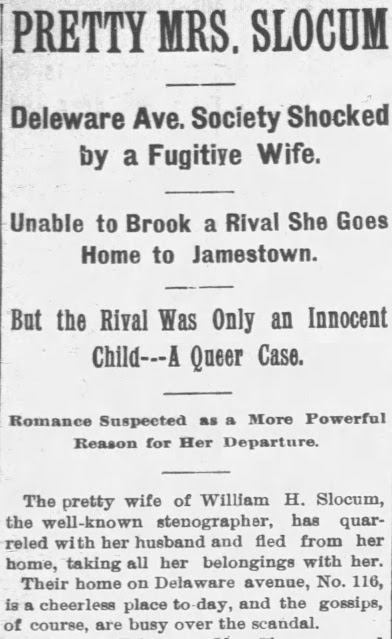 By September 1888, Slocum had other pressing things on his mind. According to Buffalo’s Sunday Truth, his new wife, Phebe Fillmore Slocum (née Woodford), herself a stenographer, had disappeared. Truth reported that Slocum had placed an advert in an evening Buffalo newspaper which read, “Personal - My wife, Phebe F., having left my bed and board without just cause of provocation, I hereby notify all persons not to harbor or trust her on my account, as I will pay no bills contracted by her.”

Calling Phebe a “pretty wife”, Truth said she had “fled from her home, taking all her belongings with her … Only last February [actually, it was January] Mr Slocum wooed and won the fairest of Jamestown’s daughters, a rosy-cheeked maiden of stylish figure and lustrous brown eyes, whose grace and beauty would attract attention anywhere. There was nothing artificial about her, as Nature’s gifts had been bountiful enough to satisfy her needs.”

But, Truth went on to explain, Phebe was unhappy with domestic arrangements at 116 Delaware Avenue, Buffalo. Slocum’s first wife, Lura Ann, had left to their seven-year-old daughter, Mabel, the family mansion. “The little girl was likely to prove a thorn in the flesh,” said Truth, adding that an Irish-born maid, Margaret Mary Ryan, was in charge of raising Mabel. “Trouble arose over the inheritance, and the fact that the child and not the wife [Phebe] was the real mistress of the mansion.” And that, no doubt, included trouble not just for Phebe, but for progress in getting the Slocum typewriter into production.

Phebe went home to Jamestown but later moved to Oregon and then joined her father in San Diego, California. In 1903 she married Pitman Wilder Parker and the couple died in California in the 1930s.  William Slocum, his typewriter-making dreams in tatters, also had to give up his court stenography work in 1889 because of failing eyesight, caused by epithelioma, an abnormal growth, or tumour, on his left eyelid. The eye eventually had to be removed. In 1890 William travelled overseas with Mabel and Margaret Mary Ryan. After his return to Buffalo he started a shorthand school, and he and Margaret Mary Ryan lived as husband and wife.

The Slocum typewriter was still being discussed - though more so as a lament - when William attended the 17th annual meeting of the New York State Stenographers’ Association at the Adelphi Hotel in Saratoga, in late August 1892. A speaker said, “ … brother Slocum’s machine has gone the way of hundreds of others …”  Upon William’s death, Mabel took over the shorthand school at 555 Ellicott Square.

Posted by Robert Messenger at 20:35

Thank you for digging into this! Poor man, it sounds like a difficult life.

His typebar machine reminds me of the American understroke but also of the Fitch, which has a similar system of jointed typebars (coming down from the top, rather than up from the bottom). Very interesting.

sometimes i show up here and am amazed at the research and scanned ephemera on display.

tonight was one of those times.

sometimes i show up here and am amazed at the research and scanned ephemera on display.

tonight was one of those times.